Leaving Livingstone for the city lights

After breaking camp and a good cup of Munali coffee,  I was back on the road heading up to Choma where my replacement cell phone had been sent from Johannesburg.  A big thanks to Chaku for organising the collection and delivery for me.  I was initially on my way to Lake Kariba, but after a discussion about the road conditions after recent rains, I decided to push on to Lusaka.  My estimated time of arrival on the GPS was 16h30 so off we went looking forward to seeing the city. 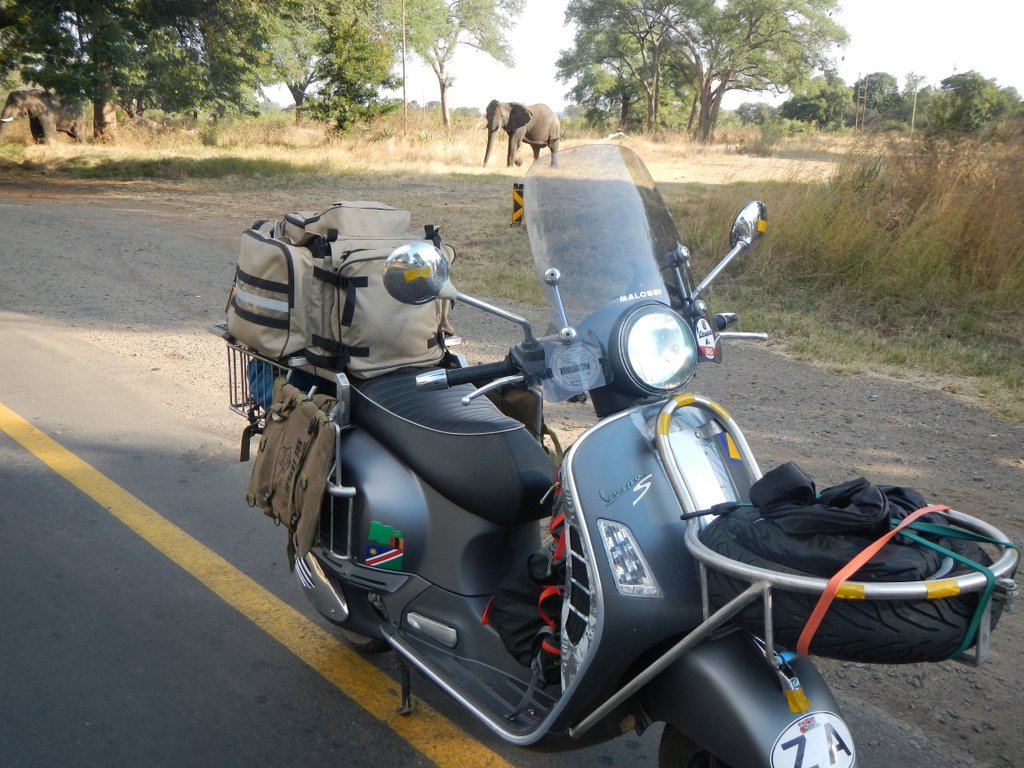 Parting shot from the road through Livingstone. I did keep Victoria running just in case.

All was going really well until about 100 km from Lusaka. A baptism of fire it was! Trucks, buses, fast cars, taxis, oil- spills and potholes. I had never ridden in conditions like this before-  we really had to apply concentration and find some skill fast . At the 60 odd km mark  things got really out of hand. The worst bit of road to date.  I finally only arrived at the campsite I had found after 18h00. I had a look around found it a bit run down and decided to move on to a Backpackers I had read about in a suburb of Lusaka.

I could not find it on my GPS so I approached a group of campers enjoying a braai to ask for directions. The group was made up of South Africans and luckily a local couple who new exactly where I had to go.  Manuel and friends would not let me leave until I was well fed and rested. Thanks for a delicious dinner on the move guys – I so enjoyed meeting you all and breaking bread.

I eventually arrived at my destination after dark. I was exhausted after having left Livingstone at seven,  so had a welcome shower and off to bed to take on the sights and sounds of Lusaka in the morning.

I was up early to try and fix my fuel bags because I needed to carry extra for the next part of my journey, so super glue and duct tape it was – the essential repair kit for most things on the road. I was looking forward to my day in Lusaka as Rebecca had put me in contact with a friend of hers, Israel, who lives in the city I wanted to get a sense of the city and what a fantastic day it was . Israel picked me up and we spent the early part of the morning driving around with him showing me the different pockets of the city,  from the compound where he lived to the suburbs to his home where I met the family . Then we were off to the new stadium for the Zambian 50 year jubilee celebration . 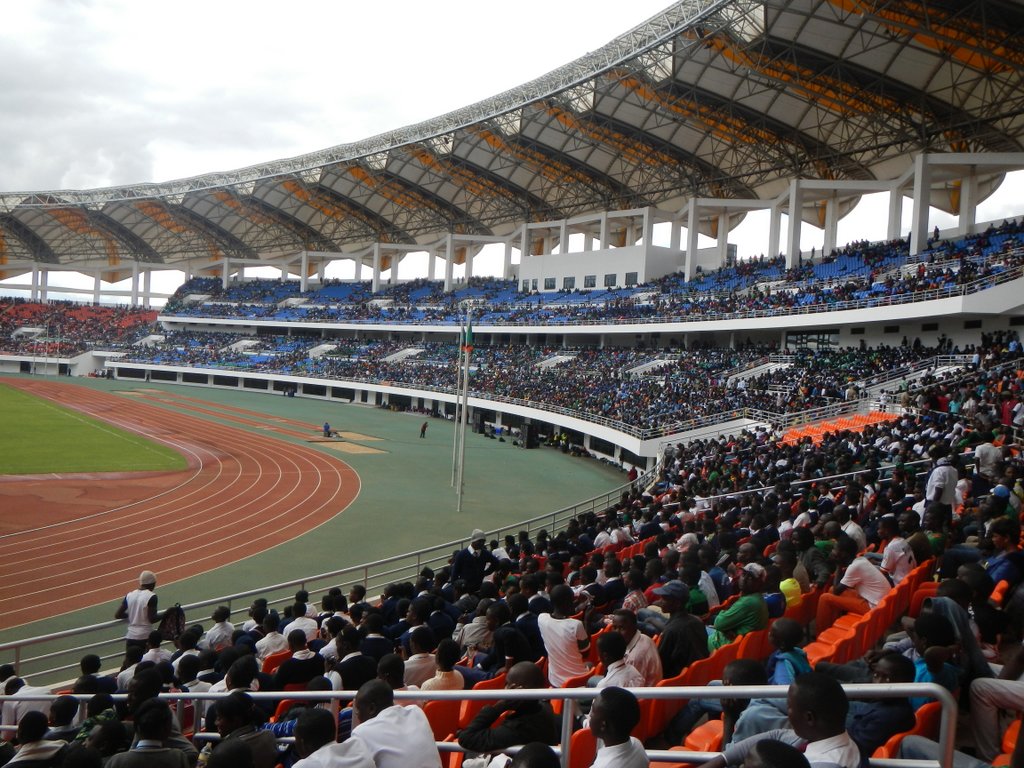 So much fever , excitement and colour 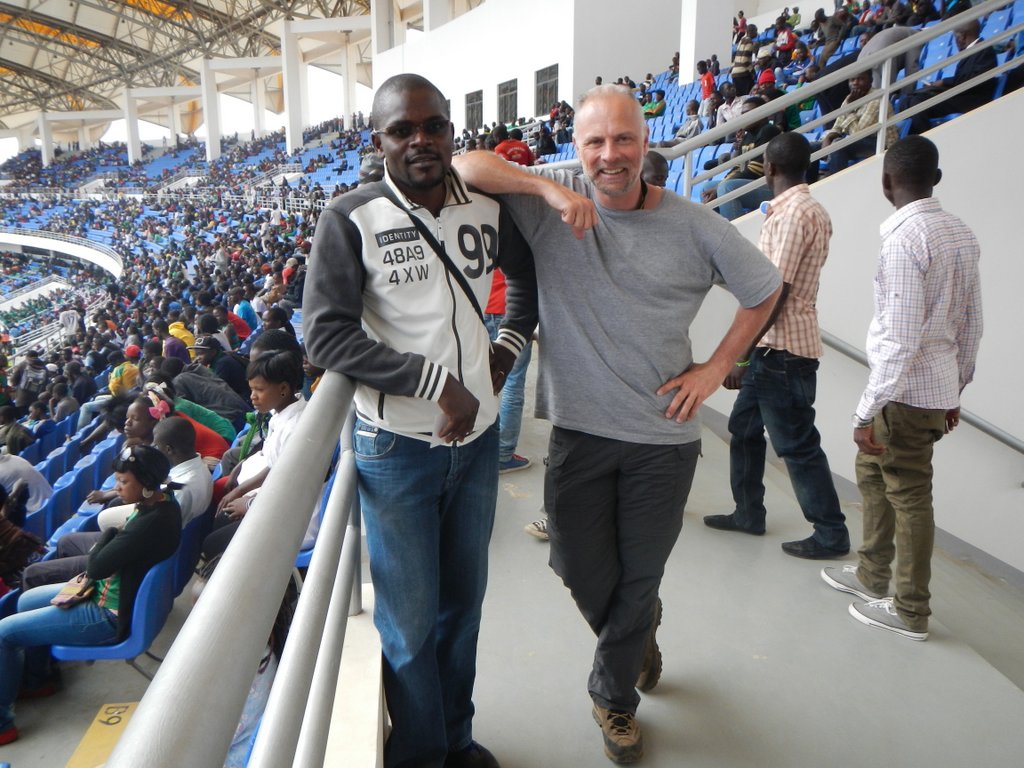 Israel and I at the National Heroes stadium

I spent the most glorious day with Israel touring downtown Lusaka , having ribs and fantastic conversation over a fairly long lunch. I was so impressed by Israel and his family as to how much they put back into rural Zambia with the mission work his parents do and his work helping the community become more tech savvy.

Israel and I share a love for the outdoors,  so I will be returning to share this side of Zambia with him when the opportunity presents itself.  He tells me he has discovered some really special places in Kafue National Park. I can’t wait.

The more time you spend in Zambia the more the people warm your heart. I have met such wonderful people as I scoot through their beautiful country. Truly  gentle , kind and full of smiles. That is how Zambia will live in my heart .

Israel – thank you for showing me your world and I so enjoyed our day together.

Early evening I was dropped off, said my goodbyes and was about to have a shower and pack for my early start. I had not even got through the front garden when I was called across to join Chris and Emanuel for a lot more Zambian hospitality.  What a spectacular day . 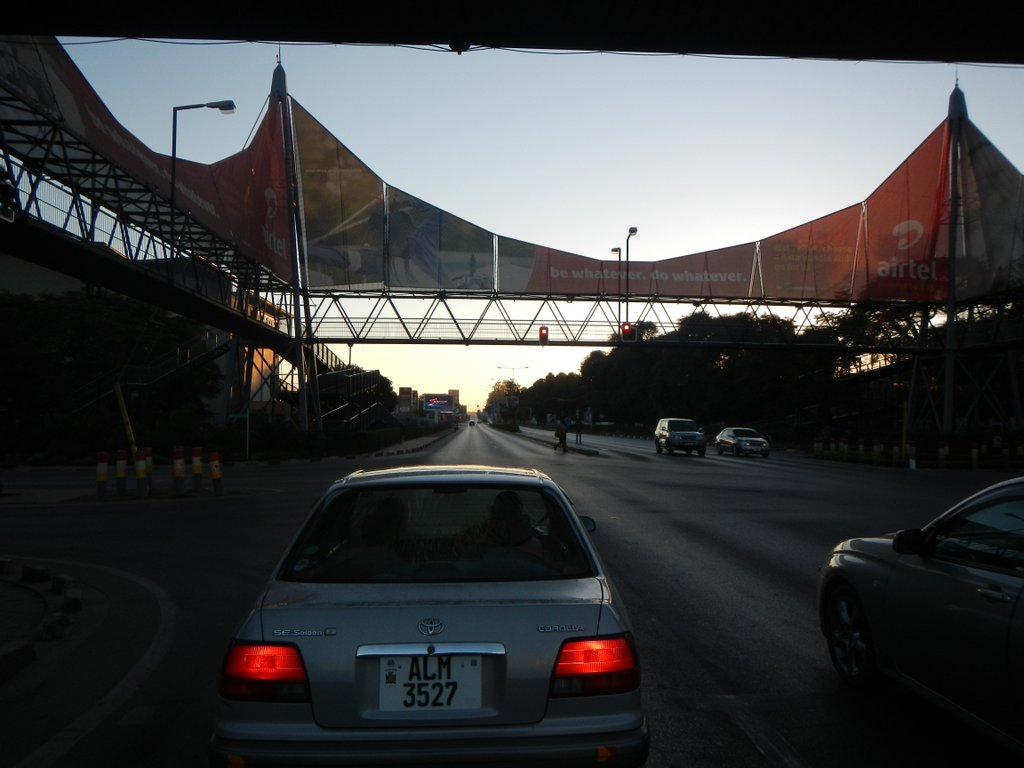 I was up bright and early and on the road by seven to ride up to Petauke about 400km away to stay overnight before I head into the bush tomorrow. The ride was absolutely spectacular with rural Zambia arriving just 60km from the city limits. Then you are transported through magnificent countryside, beautiful greenery lush like the tropics, sweeping hills and valleys, tight and twisting mountain passes, river crossings – just amazing . I find myself feasting on this countryside. It feels so Africa , free and full of space. 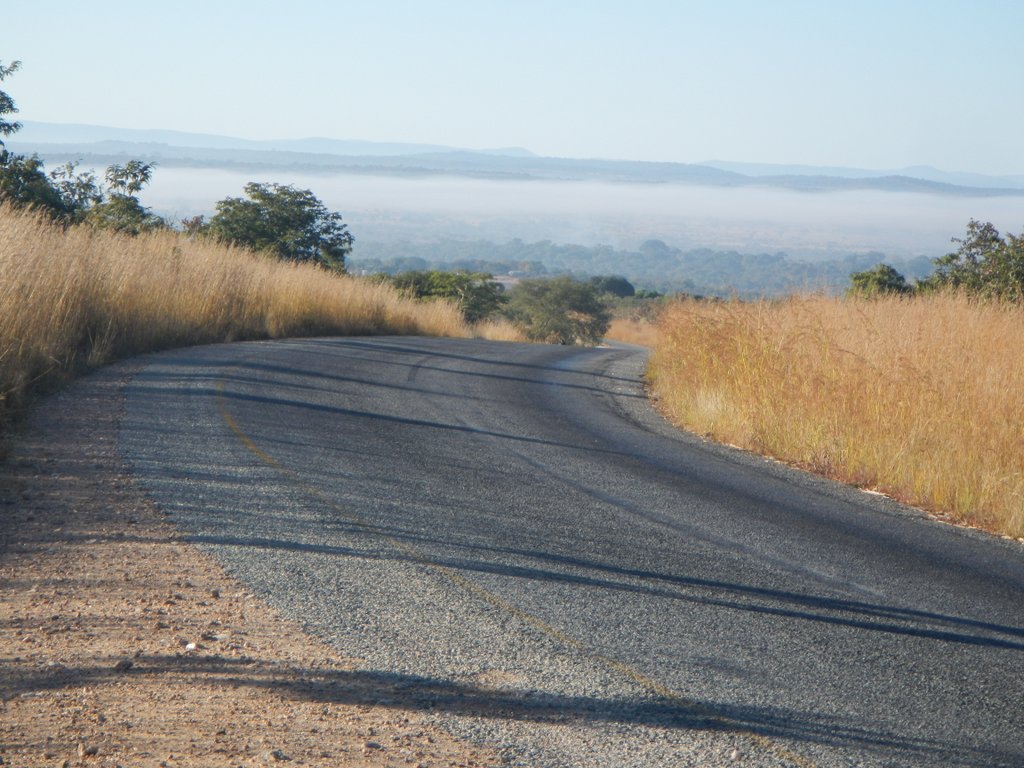 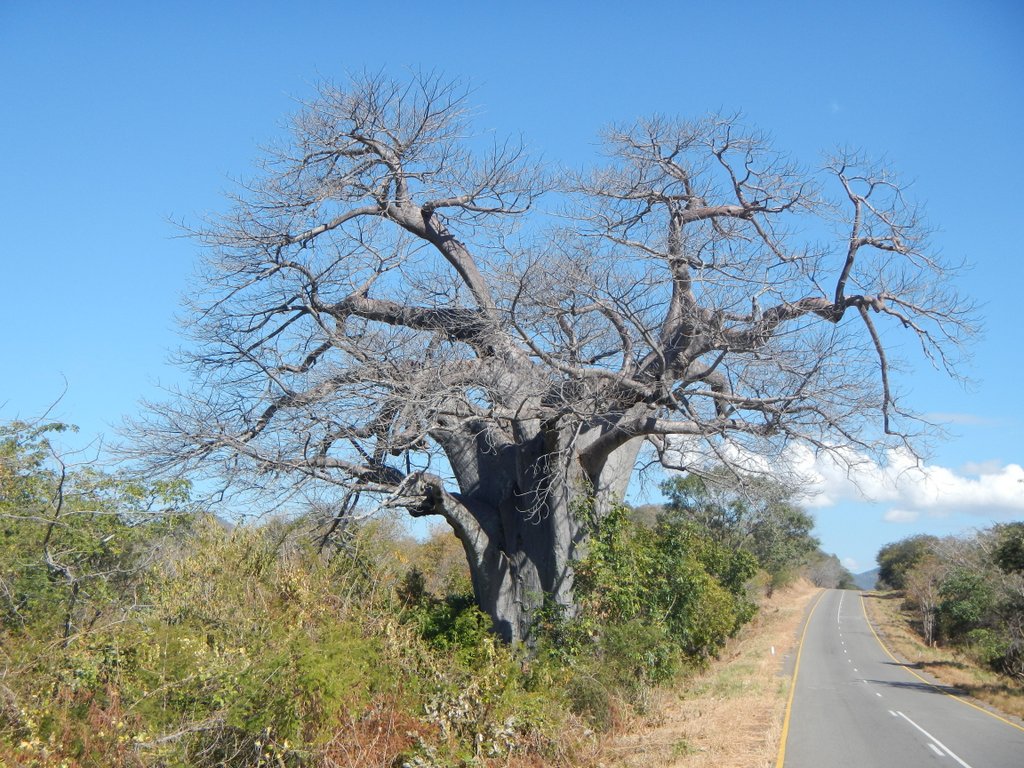 A giant at the roadside 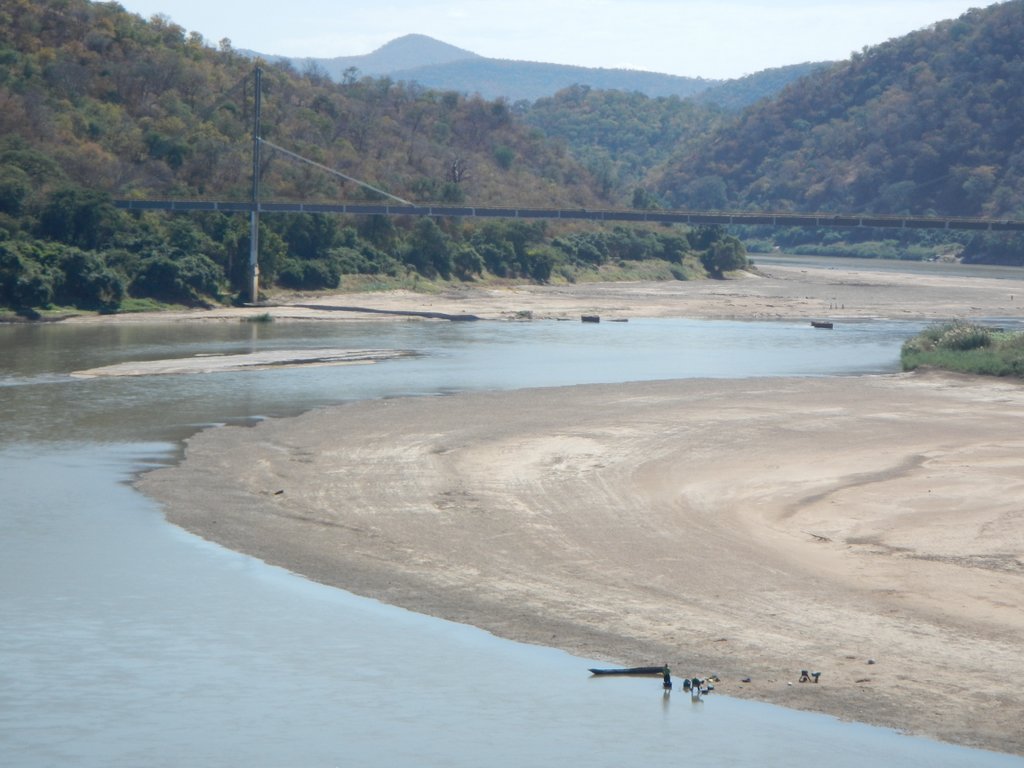 This part of Zambia seems to have stayed very true to its rural roots. Life is lived on or with bicycles –  up and down from village to village – selling, trading, transporting and surviving . 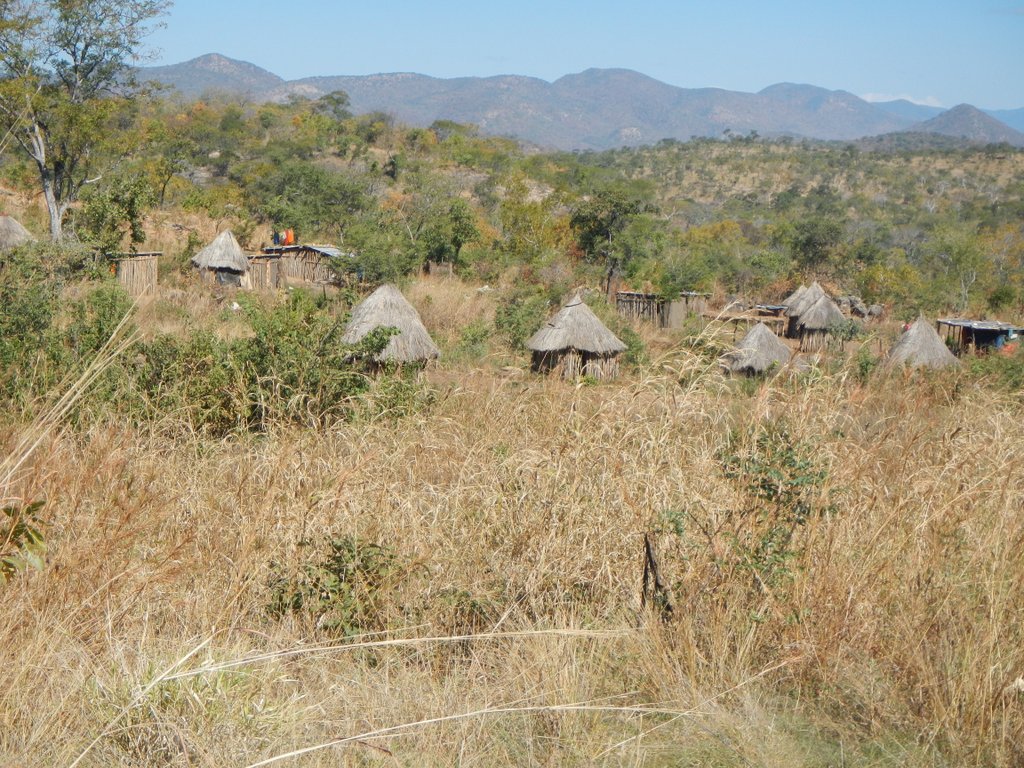 Villages all along the road 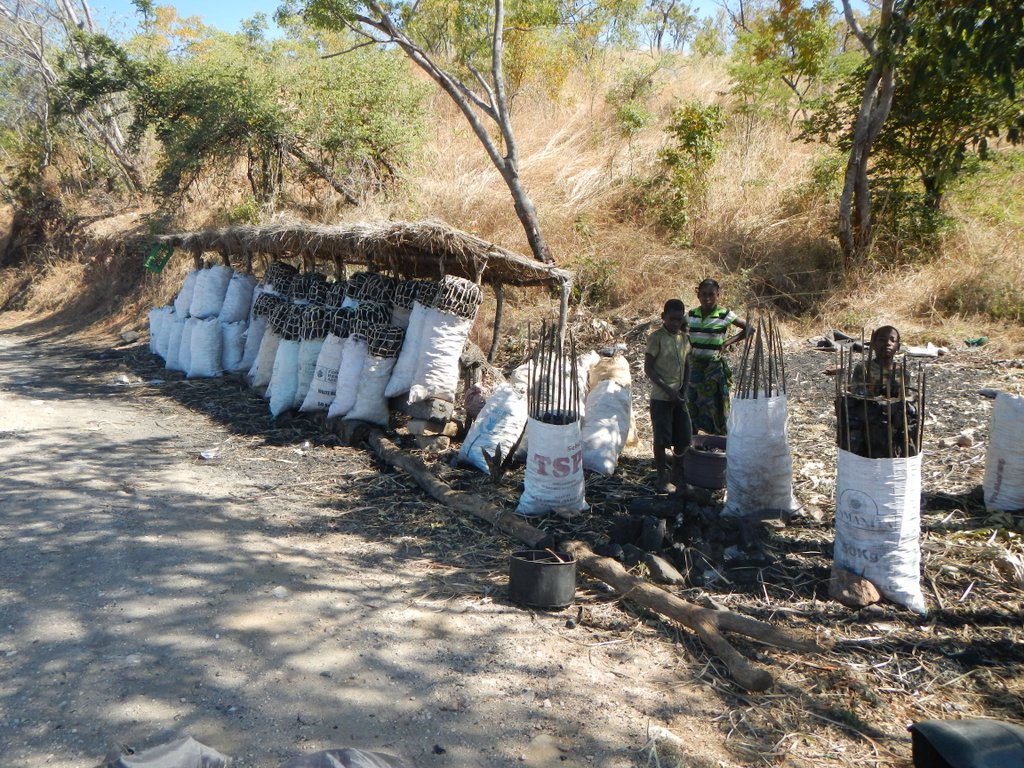 This part of the world seems to live in a different time zone with your day not  governed by hours, days or weeks, but more by the seasons and natures clock guiding you in rural life.  I arrived and booked into a lodge just off the road. This place too has changed time zones and stayed in a past one – lovely staff, tranquil gardens and I hope good food! 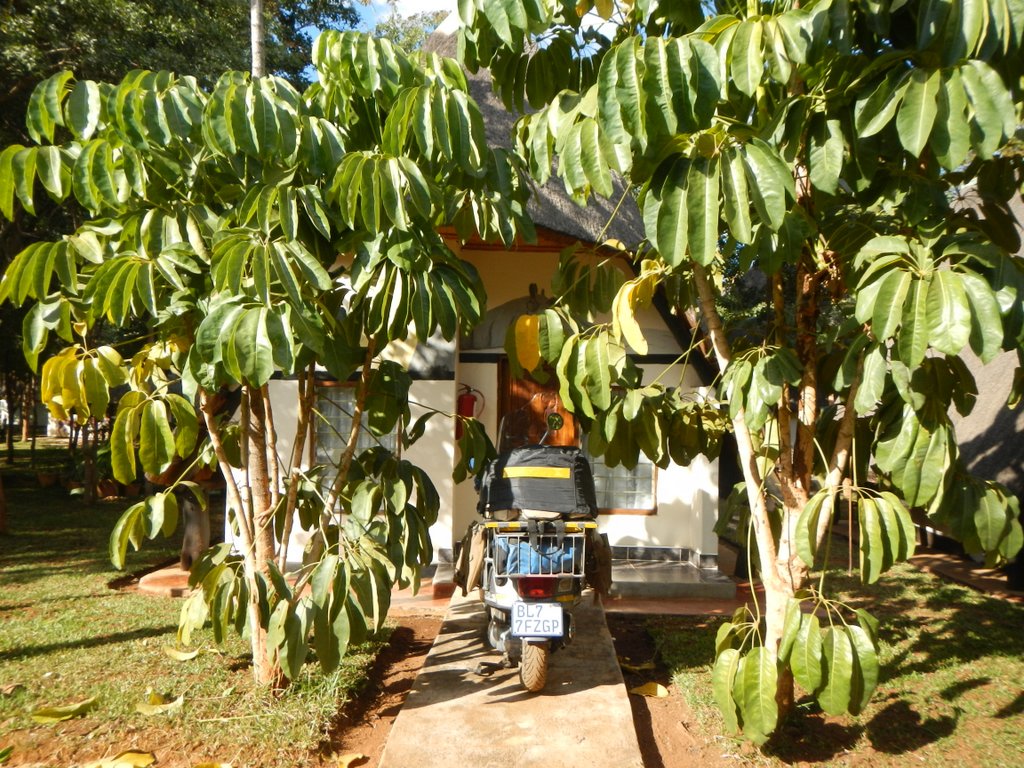 Vic in the tropics

Tomorrow I head up to Mfuwe  for two nights in the Southern Luangwa national park which I am very excited about, and will endeavour to bring you some great game viewing.

Solitaire and then the sea