To the valley of gold, Hunza

Today would be a later start with a morning strolling the streets of Gilgit in search of a small breakfast as I for one still had Cha Cha chicken overload. Leisurely eggs mopped up with paratha. A great start washed down with more than a couple of chai’s, then it was back to the hotel for today we would ride for the valley of gold, a place called Hunza and a tiny town called Karimabad our home for two nights, high up in the mountain kingdom that puts you close to God. 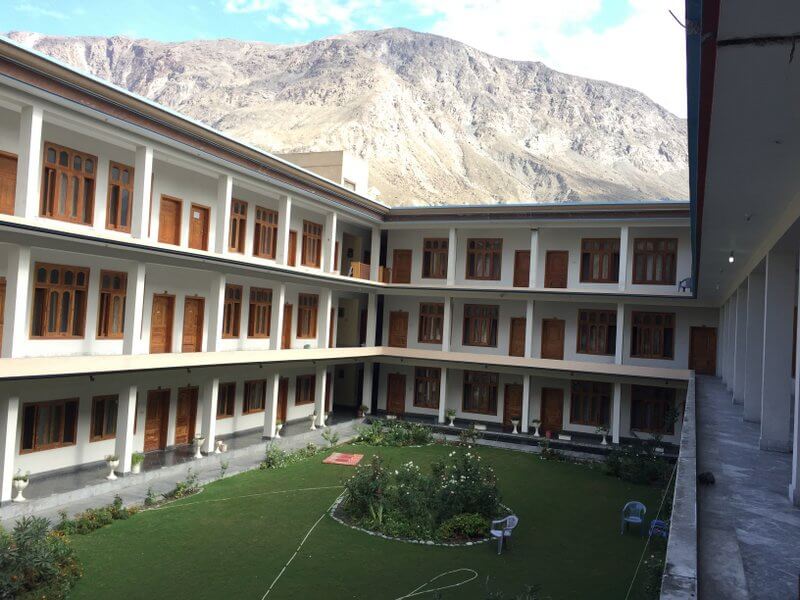 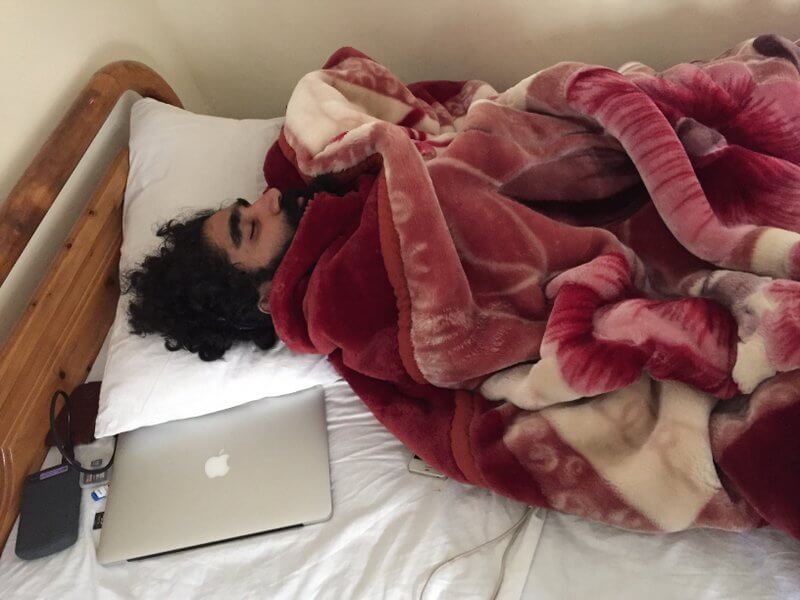 True love Atzaz and what Steve made, the slim, sexy never frozen apple. 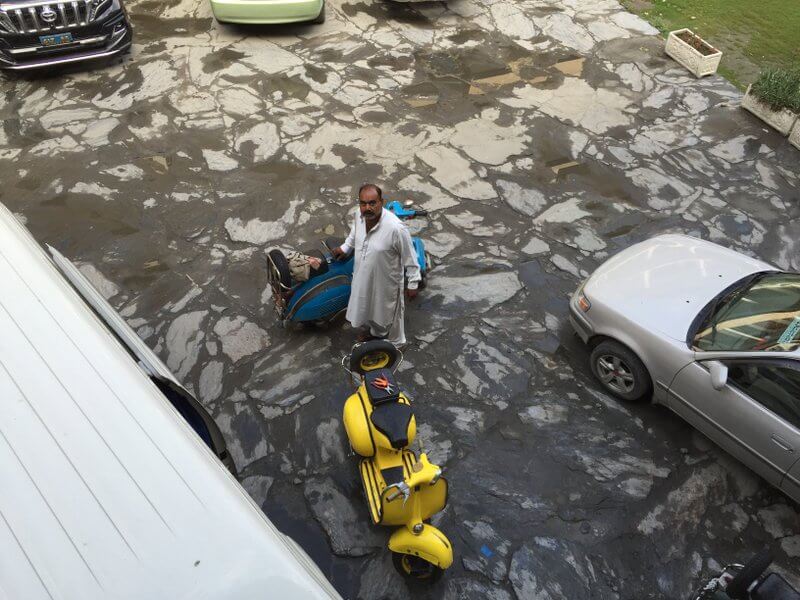 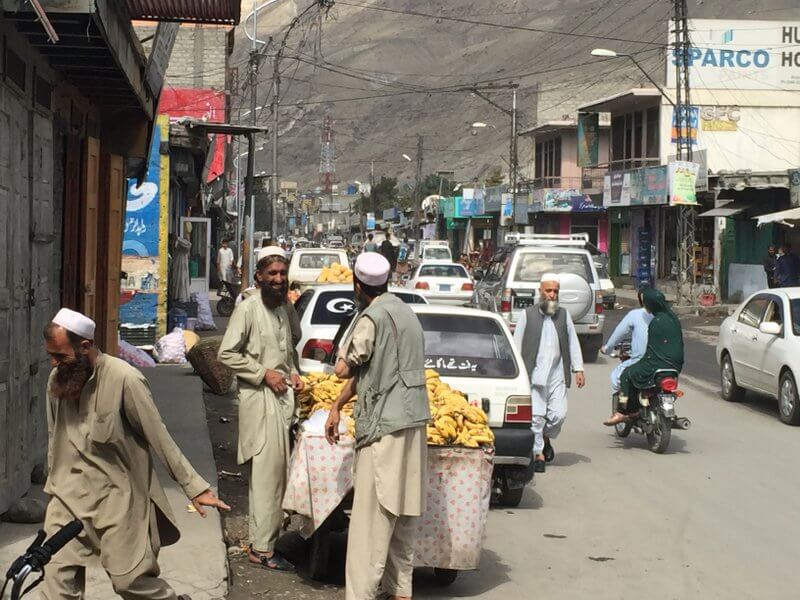 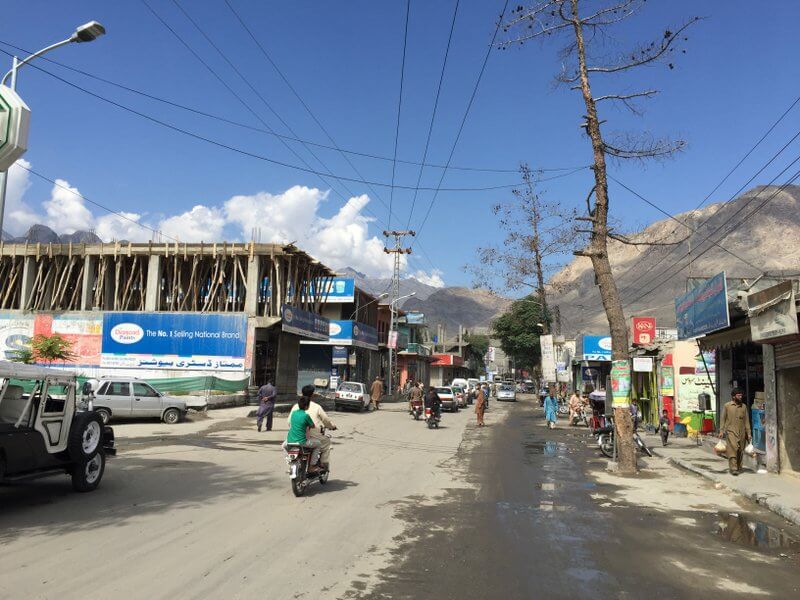 In search of breakfast. 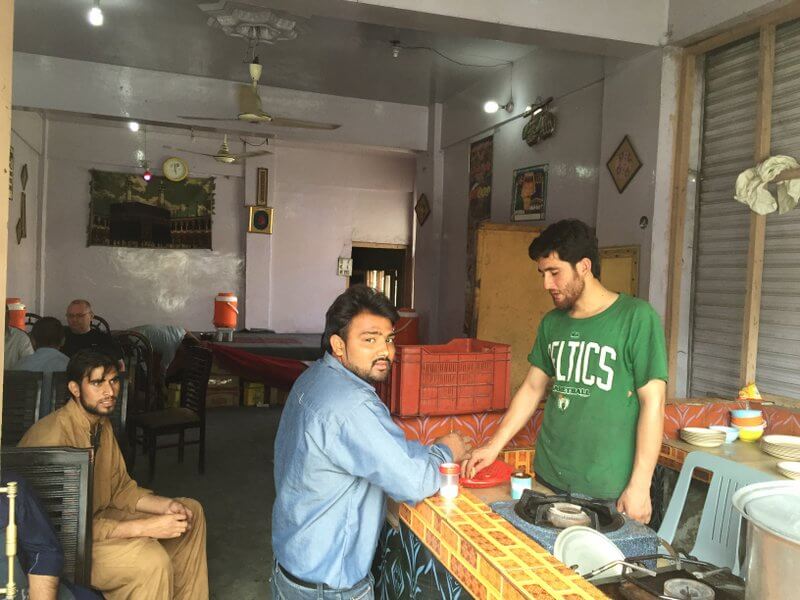 Ragu hard at work negotiating and securing food for the already over fed troop.

We took the back streets out of Gilgit passing an archaeological site currently being excavated and then on to a suspension bridge that felt like it was part of this same site recently discovered, then we were plunged into darkness, just like the house of horrors at fairs, as fast as the light was extinguished. just around the bend light led us out and into a tunnel that mother nature had a hand in, wrapped in dancing green and gold we revved, bounced and rode into the hustle and bustle on the main drag. 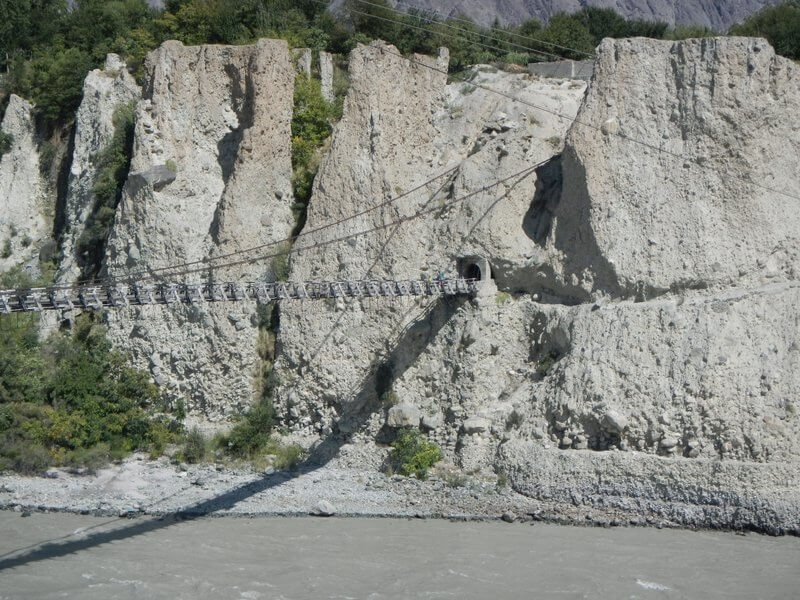 The bridge that would lead to sudden darkness, a tunnel and light. 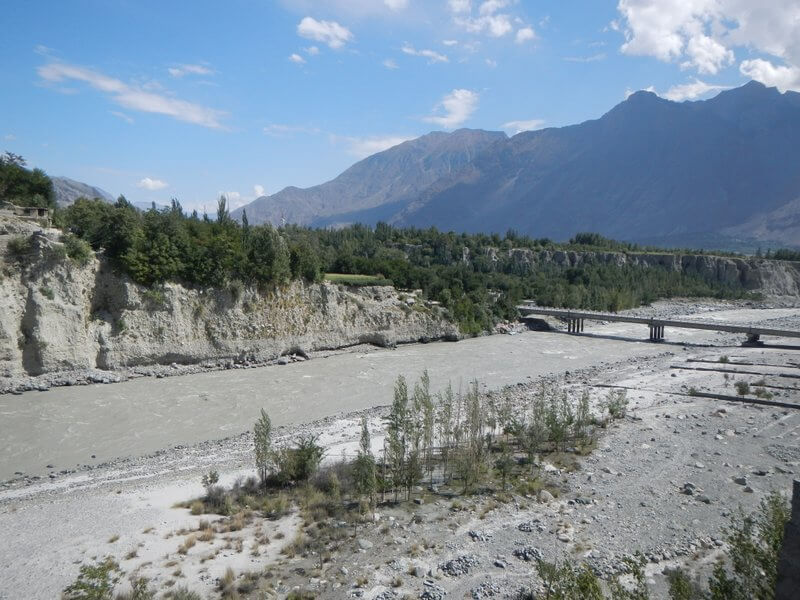 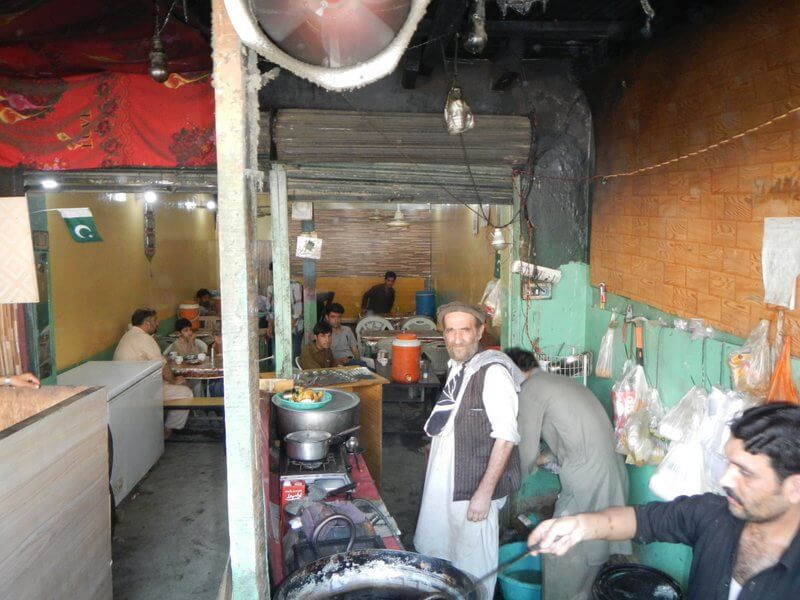 I pulled off to the side as my roving food eye that always seemed to be out on storks, homed in on the more than local breakfast spot. As if chicken from the night before, eggs of the chicken this morning was not enough, I found myself stocking up for a pending snack attack. A bounty of Pakora doused in masala spice, piping hot samosas and the delicate desert of Jalebi, a heart stopper for any diabetic, for this is a sugar spike that shows up on the Richter scale right alongside those tremors that summon a 911 call. Now it was time to pay and ride on, the owner would hear nothing of this and the more in tried to pay the more food he seemed to wrap up in yesterday’s news and pass it on to me. 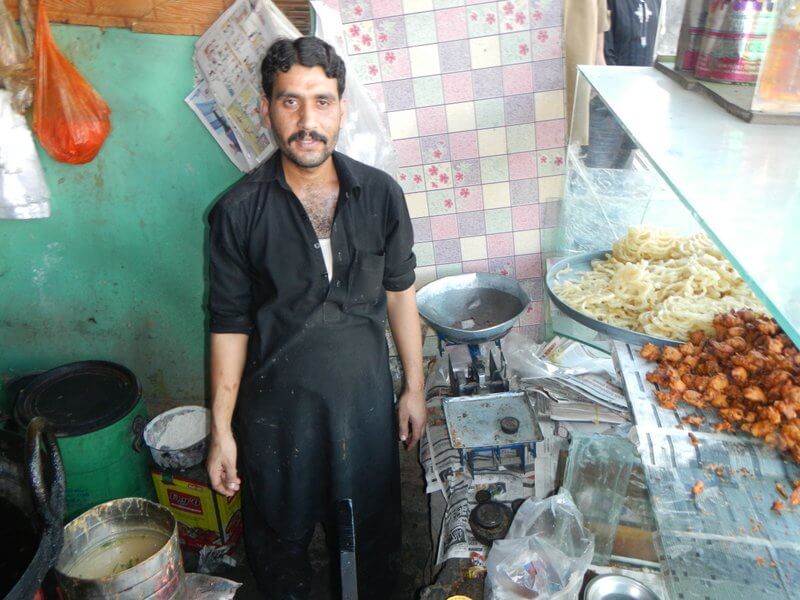 Its all in the heat and time exposed to it.

Well after trying and trying again all that was left for me to do was thank every staff member from the prep man, to the fry boy and a long deep thankful hug and an almost unending hand shake that was actually a hand hold with the owner. As a matter of fact, guys holding hands in Pakistan is a cool thing, a show of friendship, so next time you and your mates are out on the town, having a steak and a couple of cold ones, let your hair down and hold your friends hand. It only takes a while to get comfortable and I am sure if you invite your friend from Mexico named tequila you might be comfy in no time, 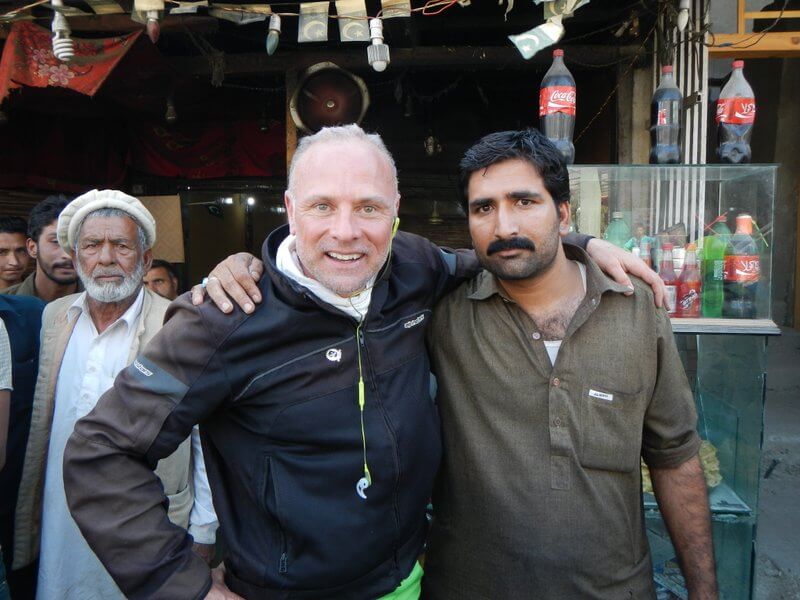 Handshakes and holding of hands.

Saying goodbye to a friend full of generocity.

On to the KKH (The Karakoram Highway / the old silk route) off bomber and I whizzed, not to far mind you, as this country is just so beautiful you find your mouth hanging wide open and your wrist taking the gears down to stop, look, shoot, trying desperately to capture Gods work. While rocking to Goldfish moonwalk away I felt eyes upon my back, so while dancing to the tunes loud and SA proud in my earphones, I danced around to come face to face with a father and son parked on the side of the road watching me dance, sing and photograph their land. 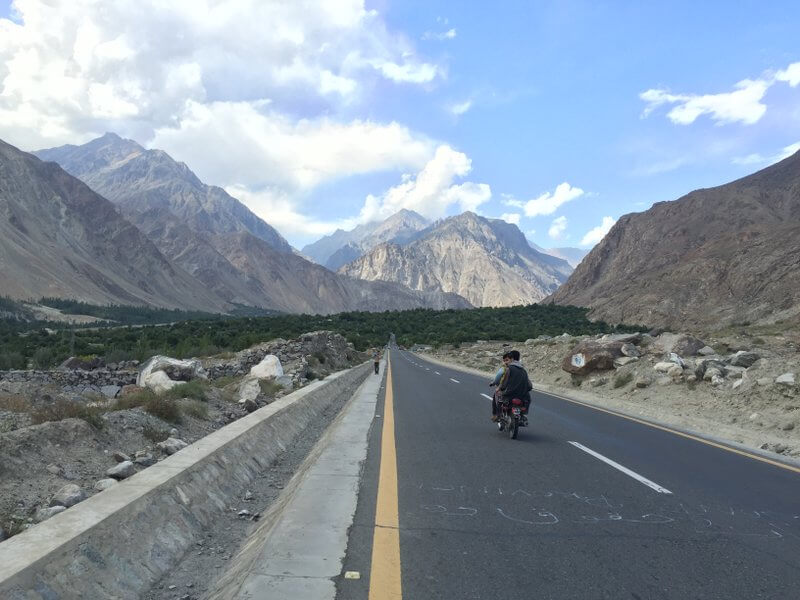 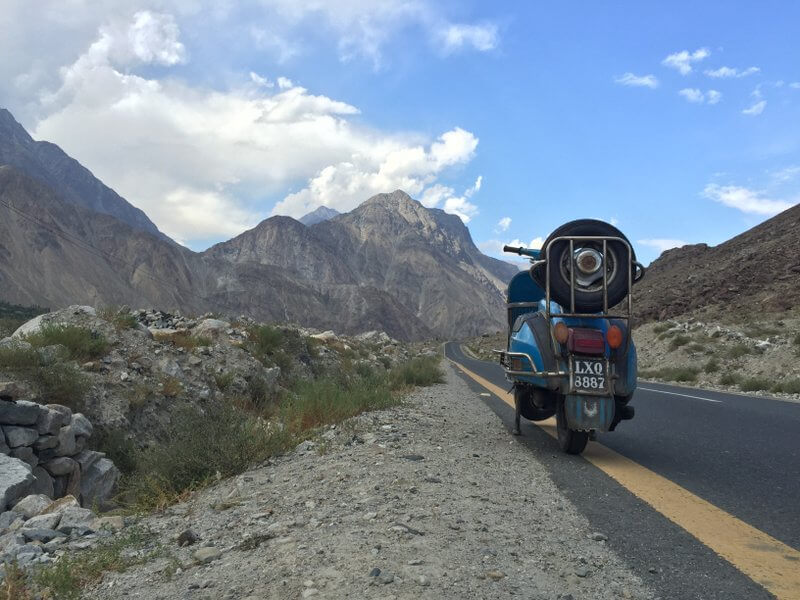 A place to talk to a stranger. 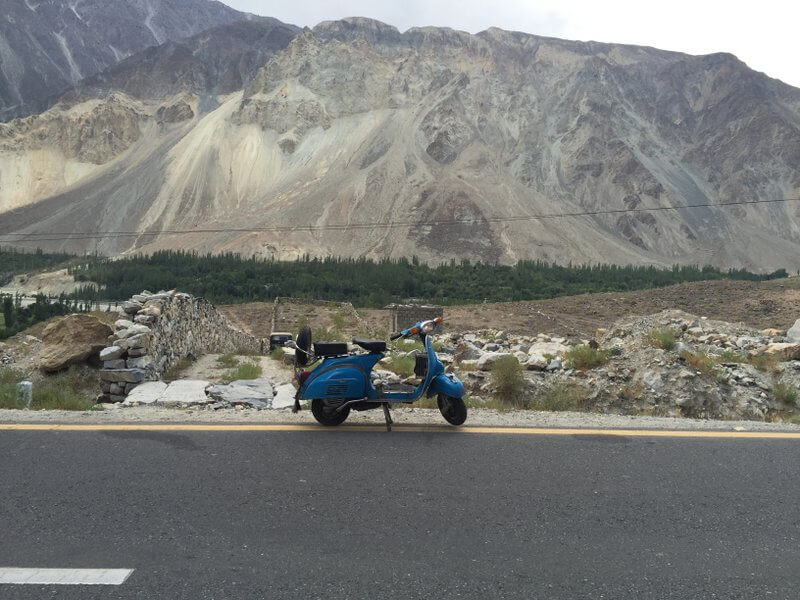 As one would expect I turned down the sound and so we got to chatting, I was welcomed to Pakistan, I was offered more food, I was invited to stay the night or a few days with my new found friend and his family, I was given his top ten must do’s in the area and after politely declining all and explaining my route and my destination , a cell number was scribbled onto a piece of paper with clear instruction that no matter where in the country I was , no matter the time , no matter the situation , I could call and he or someone he knew would come for me , so we held hands for a bit then it was time to hug and ride on . I have to admit I hugged a hell of a lot riding the roads of this amazing country. 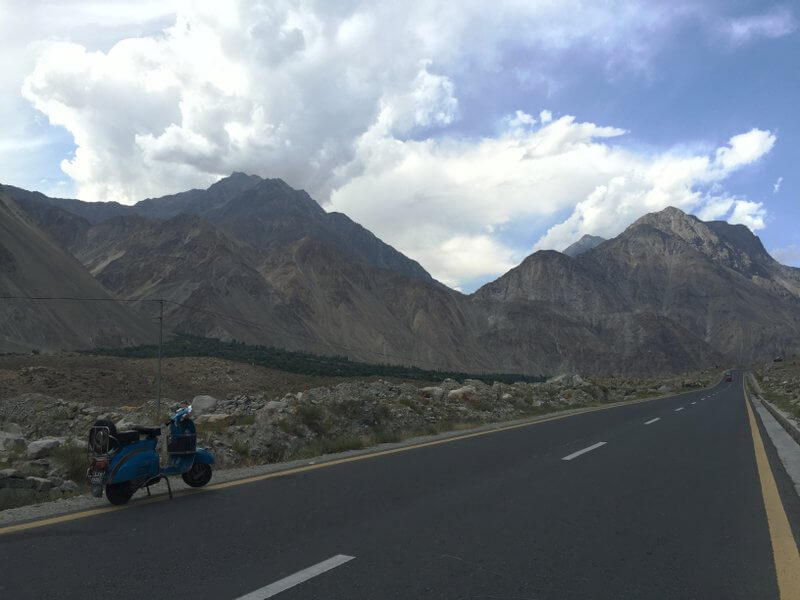 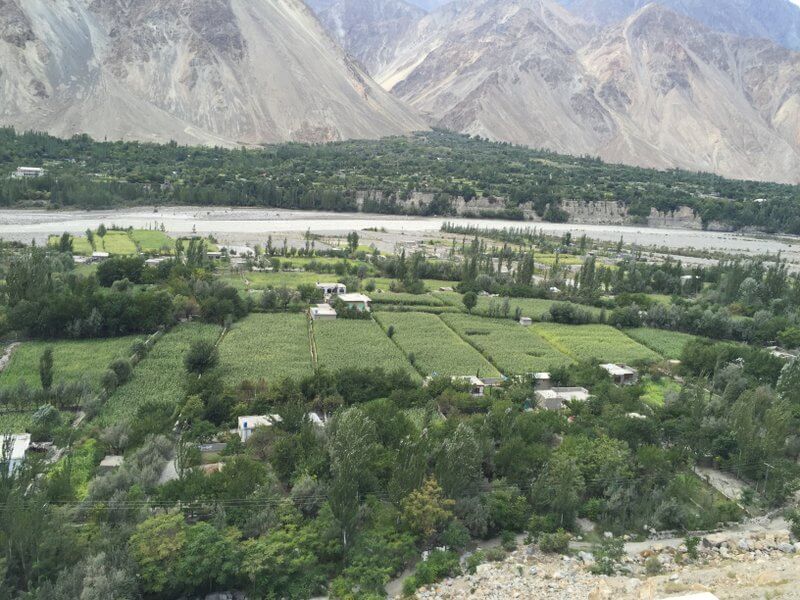 How do you not stop. 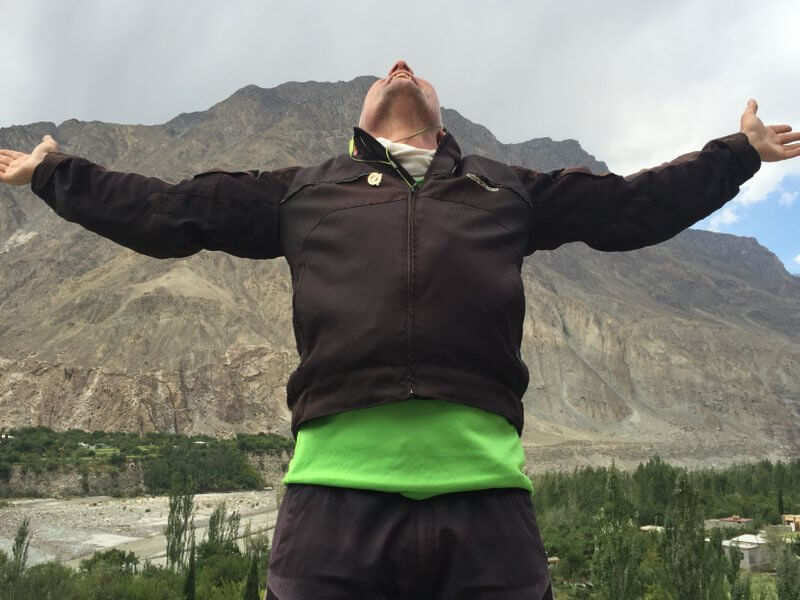 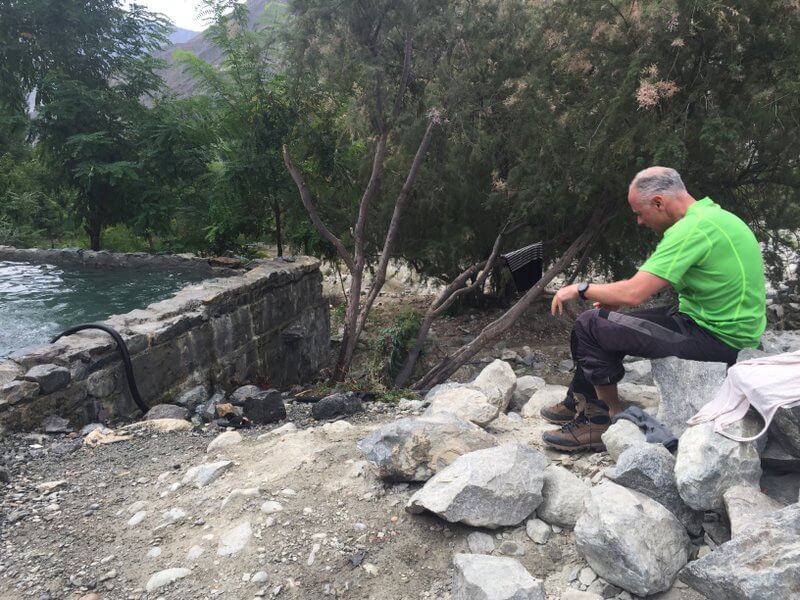 Poolside on the KKH.

The morning traded its coolness for the heat of the day and luckily for me as I was riding I came across a bunch of kids swimming in a man-made rural pool fed by the clear crisp , invigorating mountain water , I pulled off , asked for permission to join them in this refreshing activity , I was warmly accepted and as I started to get all the bike gear off the chuckles turned to laughter and by the time I was running for the water in my snow coloured under rods with my Cha Cha chicken belly bouncing the Cha-cha, bent over hysterical they were. So we got to attempt a few Chad Le Clos just slower, but laughter came loud and easy and the day’s heat returned to its place of origin leaving me cool in body and mind, the wind from the road would dry me, I would sing so loud as I rode that my throat would hurt but so free I felt that I sang longer and rode slower wishing this would last the age of these ranges, that I could be absorbed into this beauty, take to the sky, so I danced on bomber as we soaked up this place. 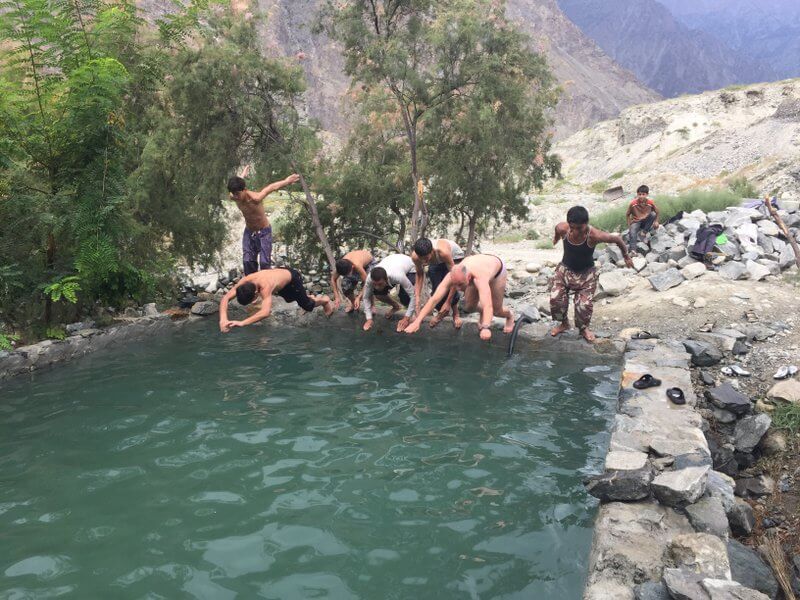 Not to Le Clos. 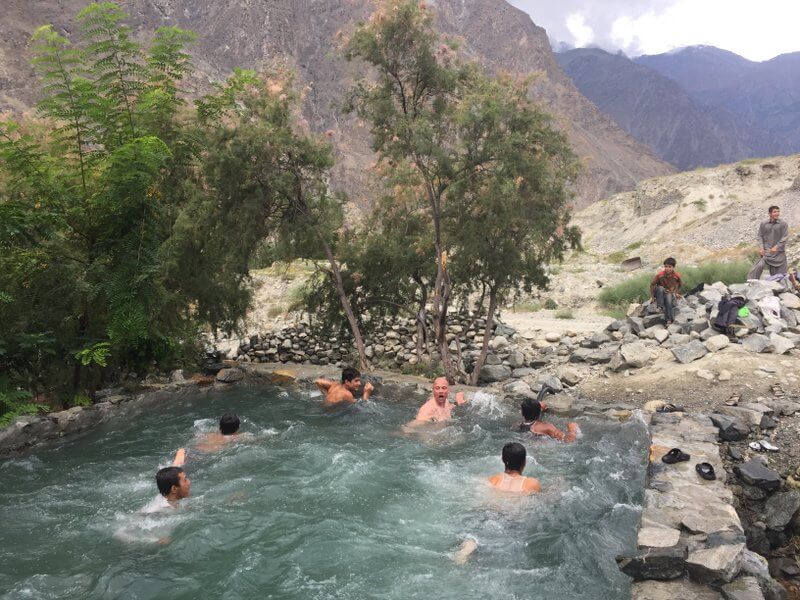 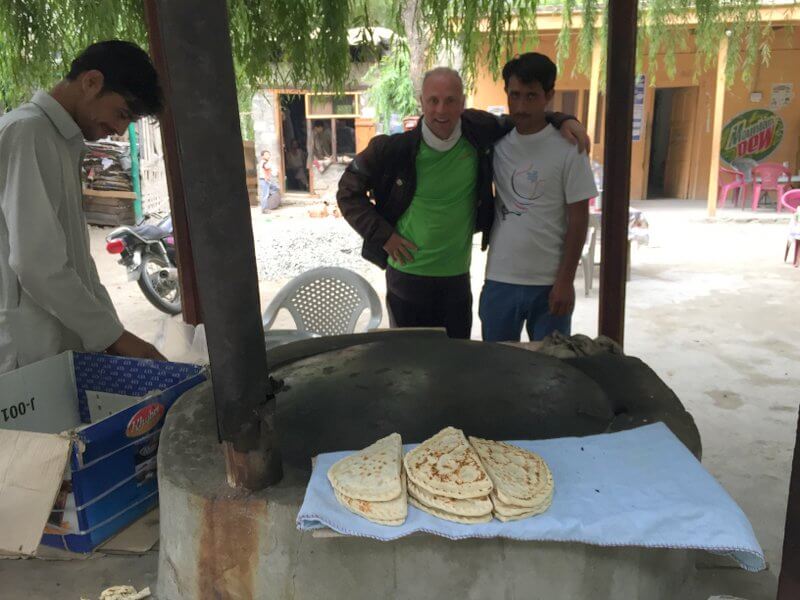 Food glorious food, this time a very traditional dish from Najar a chapshuro it is called ,mince , onions and veggies all wrapped up, served HOT.

The Rakaposhi peak came into view, a peak wearing a mantle deep and pure of driven snow, a sight sometimes hindered by clouds as they smoke around its peak, a time for chai and to marvel at this giant that reaches its bulk to a respectful 7795 meters. 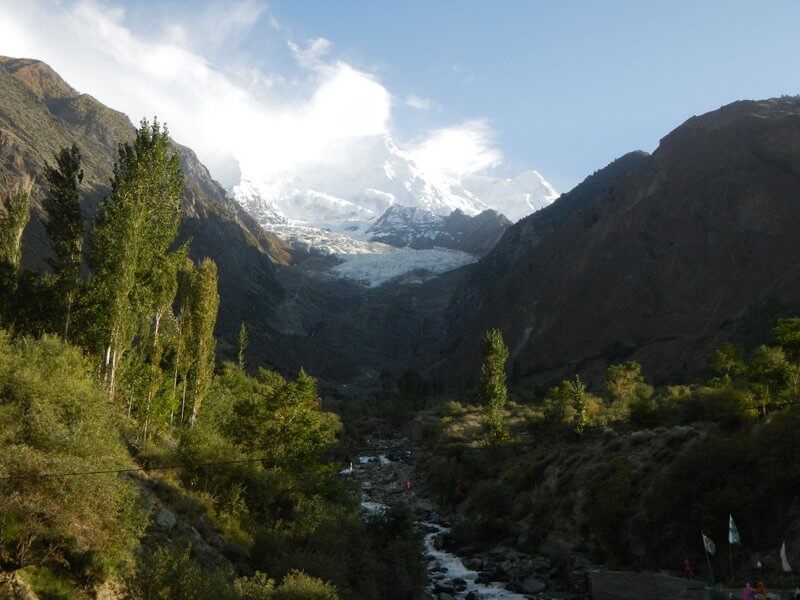 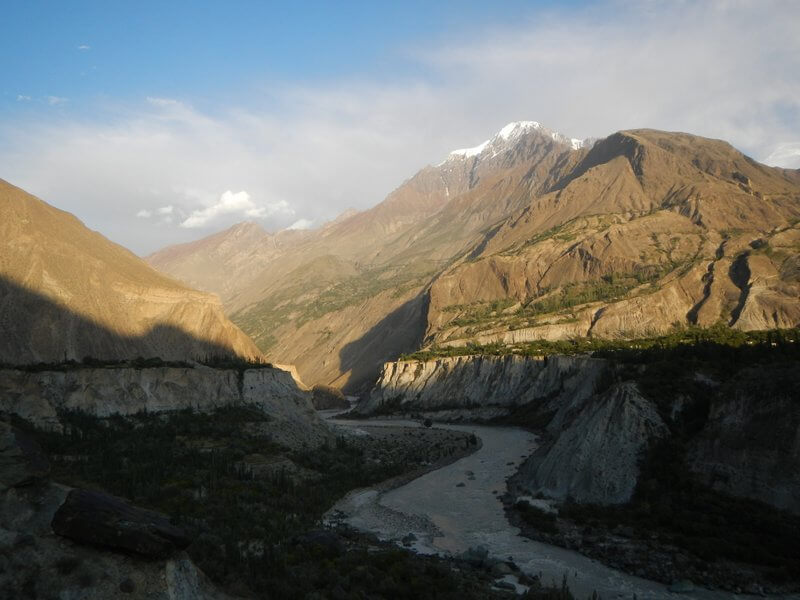 A place I would spend a long time just staring out. 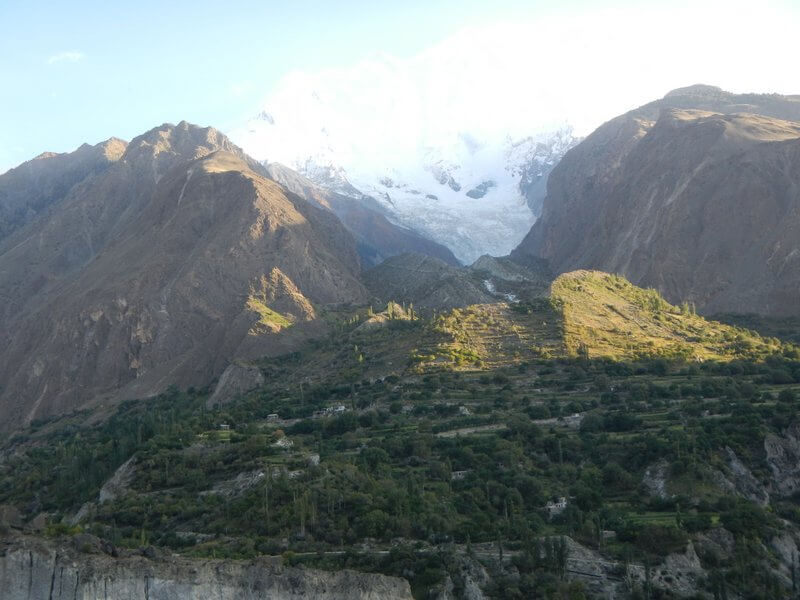 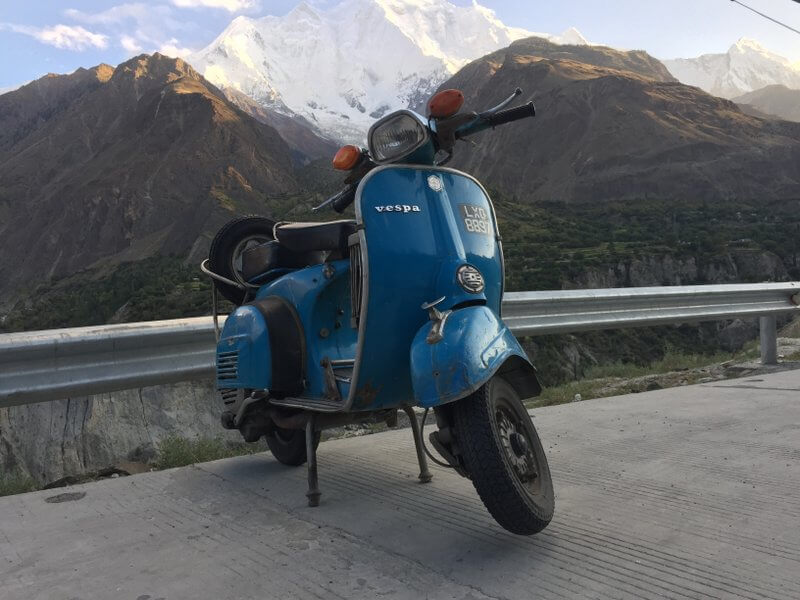 Bomber and the mountain.

My last stop would be the fruit vendor, a man displaying his produce with pride and did it rob me of the ability to ride by, gearing down I slowed and stopped , conversation ignited over apples and pears that he most kindly chose for me , then we sat shared a cup of chai and we spoke of his mountain kingdom as the conversation lengthened so the day light hours started to retreat to the shadow of the mountain , and it was time for bomber and I to ride like the wind to get home before all light was gone , for that little yellow glow that emanates from what seems to be a head light does not show you the way out of darkness it merely acts as a reminder of what a headlight should not be , the best way to describe bombers light it that it has the soft sad glow of a firefly seconds before life fades from its body , beautiful but desperately sad. 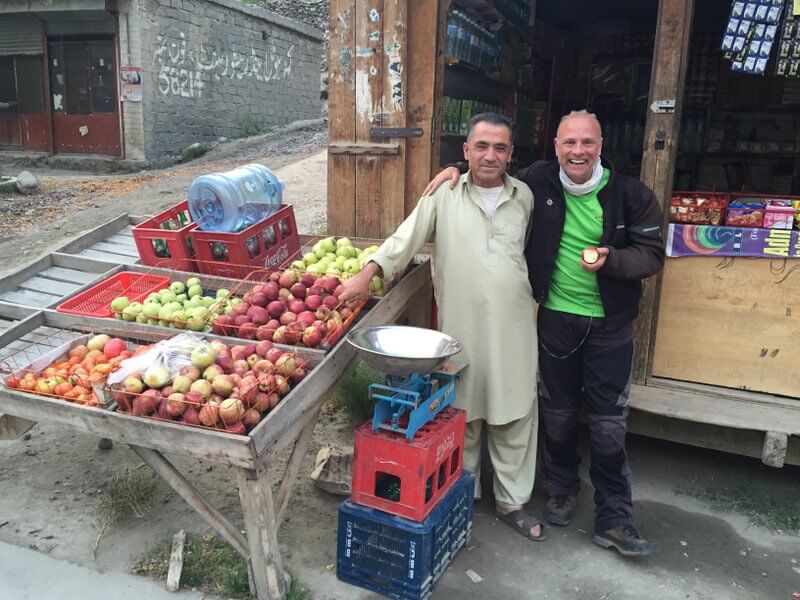 We would arrive safely with only seconds to spare as the last rays dipped, dived and the rich darkness asserts its power and domination, only interrupted by the stars that came to offer hope from the black. 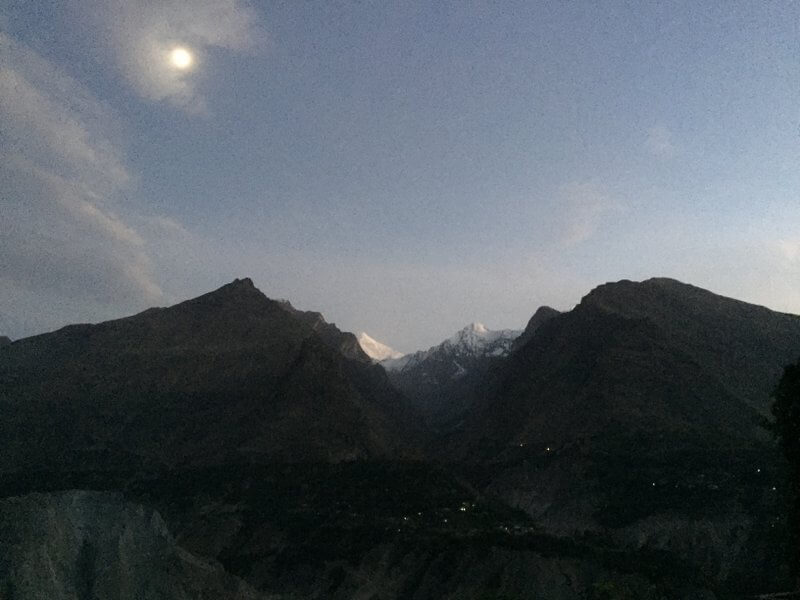 Grain,not the kind you eat.

A hot welcomed shower, a rooftop dinner, a room with a view, all around me, all in me and all of me wrapped up in a mountain, cosy for the night, I wished my eyes and heart could be lying staring up at Rakaposhi while my body lies warm and snug in the most colourful of blankets. My heart sings me to sleep. 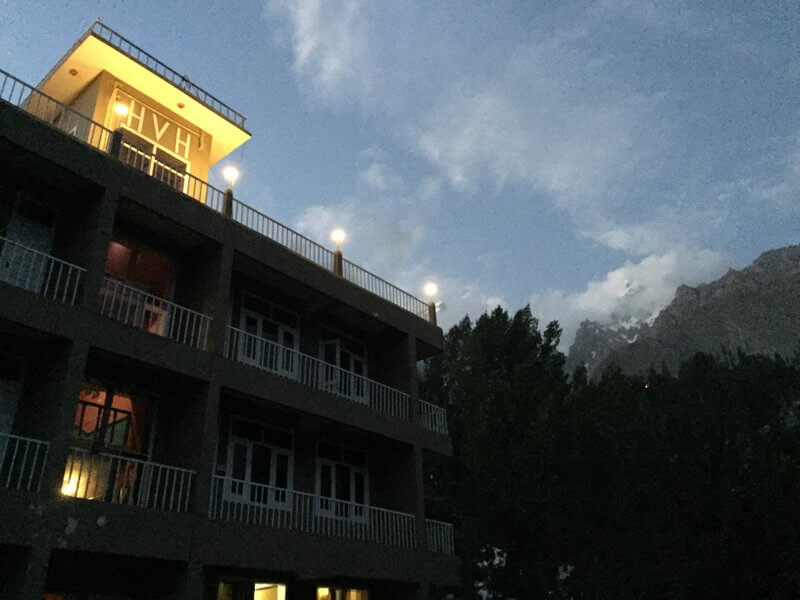 A day off Bomber so I thought.