My eyes would open on the morning of Eid -Ul -Azha, to a fever of colour, excitement and celebration, this considered one the holiest days in the Islamic calendar and the second two Eid’s, the first occurring at the end of Ramadan and the second also called the “sacrifice feast” that occurs with the descent of the Hujjaj, the pilgrims performing the Hajj.

To all those around me Eid Mubarak, a blessed Eid.

After breakfast it was out into the streets to ride up to Passu , today would be short in kilometres , long in time but just beautiful and relaxing as I soaked up the beauty that surrounds such a holy day . The men returning from Mosque in crisp, clean, pressed Shalwar Kameez with purity that only this white can project. The woman expressing their inner beauty and peace in the most amazing display of colour, pinks and purples that immediately throw you into a spring garden, that’s lets you feel the rich colour on your skin as you walk, the blues that take your mind to the skies above and then show you the deepest of oceans. This day that marks the beginning of three, excites, celebrates with colour, spiritually renews a people, and is a time of and for remembrance. Thank you for the privilege of including, sharing and teaching me as I ride the roads of your country. 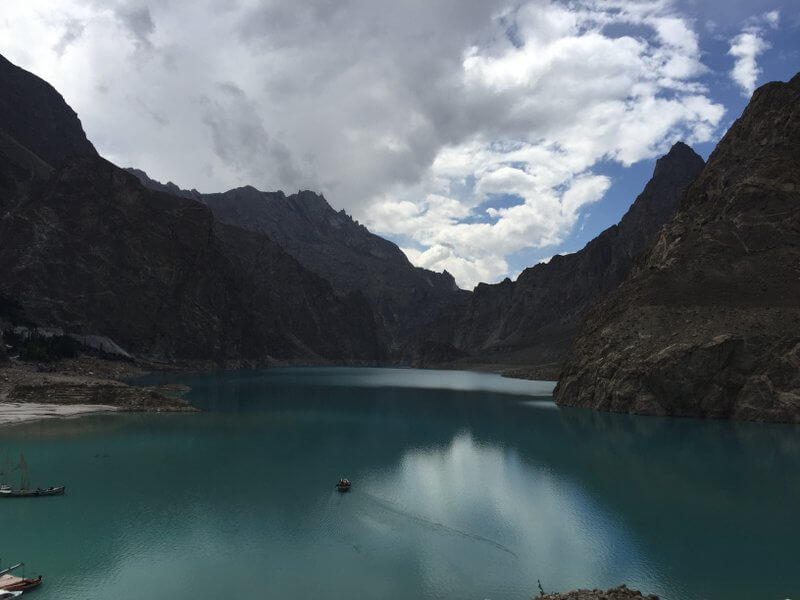 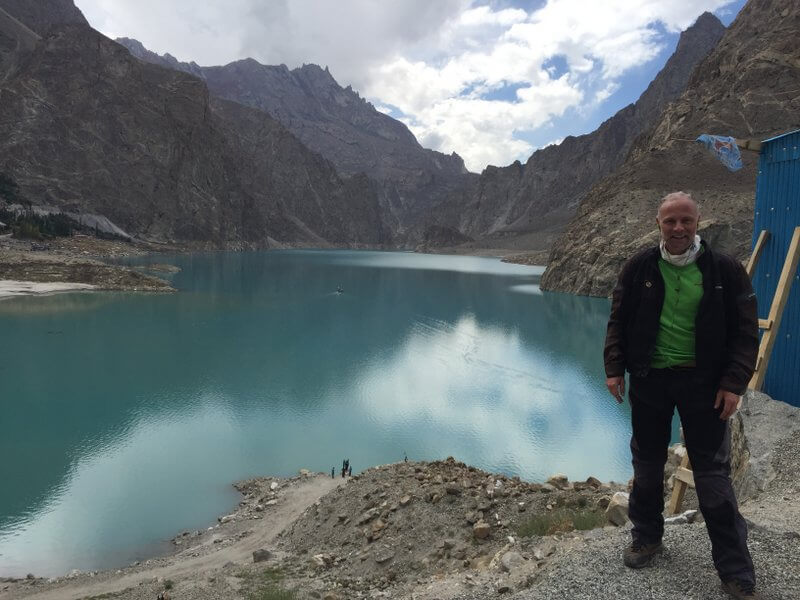 This road would let me see the ability of man to attempt the pacifying of nature, I would ride tunnels so long and dark you think no light exists at the end, so the Chinese and Pakistanis have carved out a road that leads to a border high in the mountains, this road that displays unimaginable beauty on both sides, a place made tranquil by the blue of the lake, the greenery of pastures to feed and grow, a place that slows your ride, the rate of your heart, opens your eyes and lungs 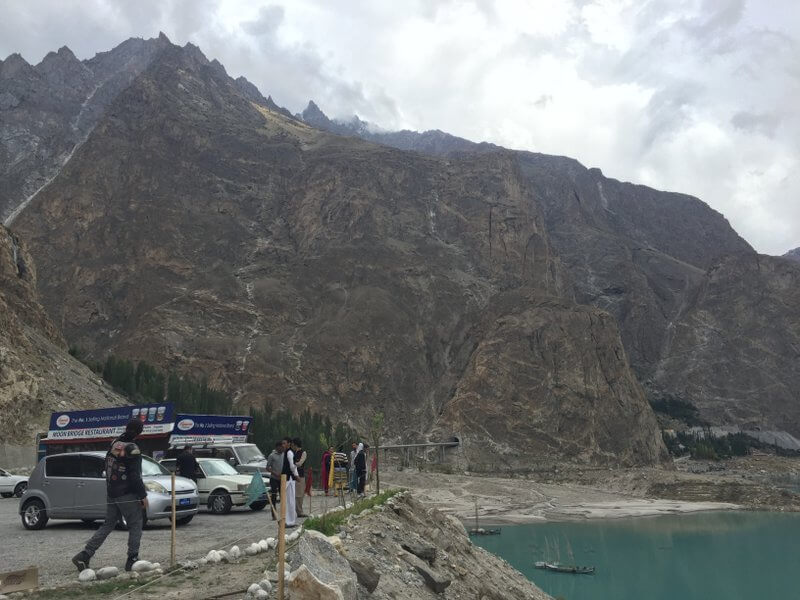 In 2010 devastation in the shape of a massive landslide that took a town away, closed a road and built a lake that changed the lives of thousands overnight, so the architect of nature came rolling in and left a mark on the hearts and in the minds of all those who lived and travelled this way. So mother nature built a lake and the people named it Attabad.

From here it was on to the T part of a town, being a place so small in structures that I think less that ten buildings exist in the tiny town called Passu, but first it was through long, longer and longest tunnels. Concrete and steel structures built to rival the great wall, with no internal lights and a scooter with not much light generation to boast of, I navigated these structures by stolen light, the white LED light produced by the big GS 1200 ahead of me, so bomber and I hid in the shadows waiting for the sun to set us free. 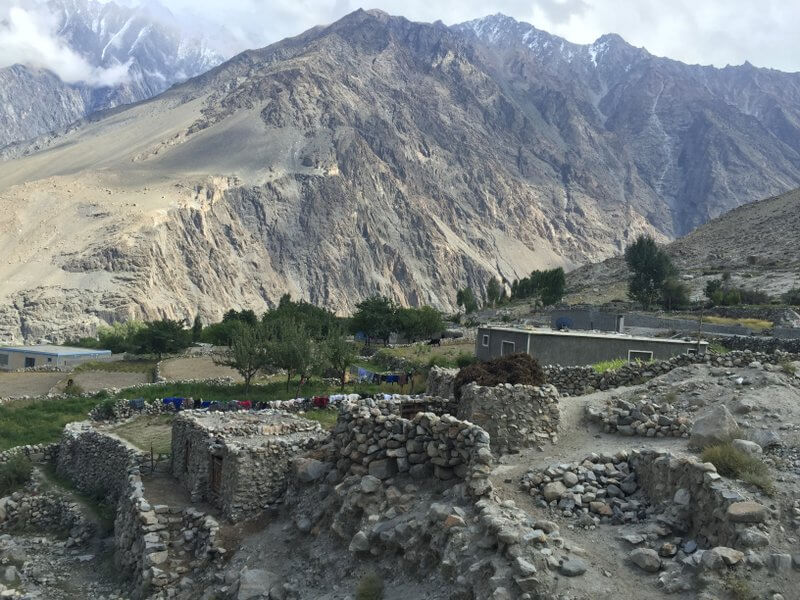 Life amongst the mountains. 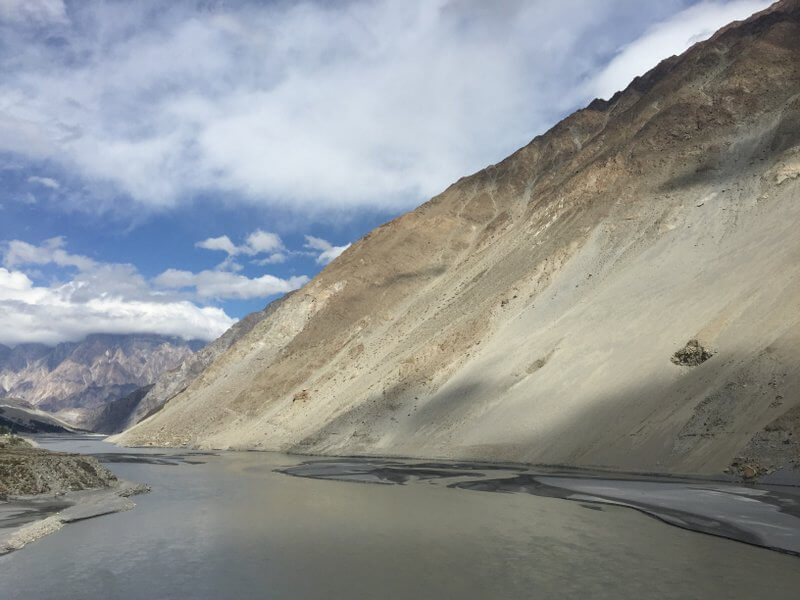 The colour of grey chalk as the rivers runs from high. 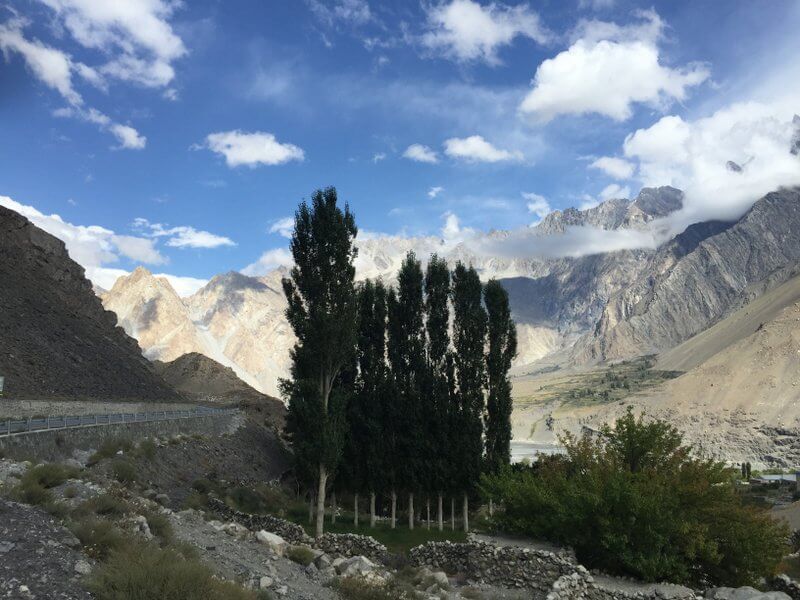 Out into the open, the road tarred and smooth leads us to a sharp turn left, onto a track called a road that would take us to a lake named Borith, that was made famous by a man who lived and danced on its banks, now it is a place that lets you enjoy a swim in its waters while your eyes climb to the snow-capped mountains that feel so close you can reach out and scoop a handful of glacier magic. It was time to hide nakedness from the people above, amongst the bushes off came the biking gear again and Raju used my riding jacket to cover the snow whiteness of my torso until the calming waters took over and I was set free to frolic in water gathered below but fed from a place high in the mountains. I swam to the centre and floating on my back, arms spread I surrendered to this place of tranquillity, peace and power, the world I live in back home washed away and all that we prize and strive for was replaced by calm, clarity and a slowed pulse that in this moment looking up at the power of creation the world felt perfect and I wanted for nothing, just to be, to be here amongst the mountains and held in this water, free to breathe, free to see. 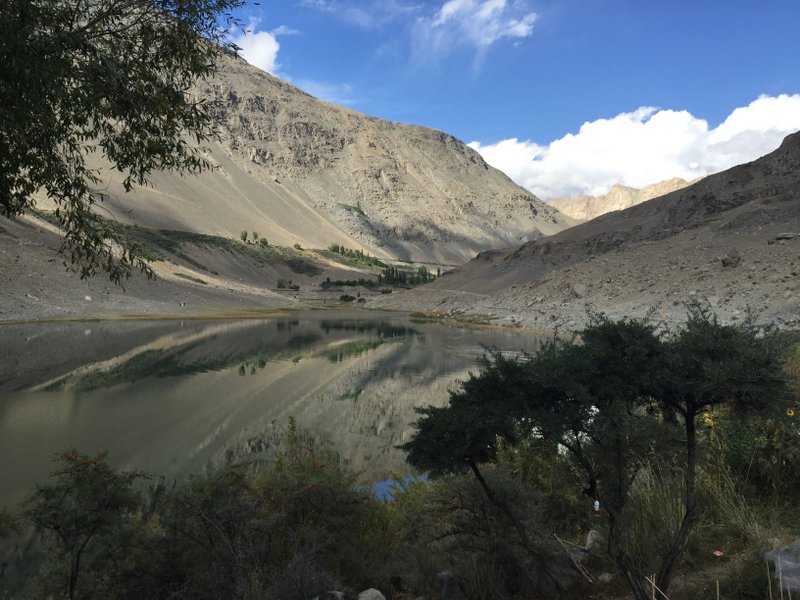 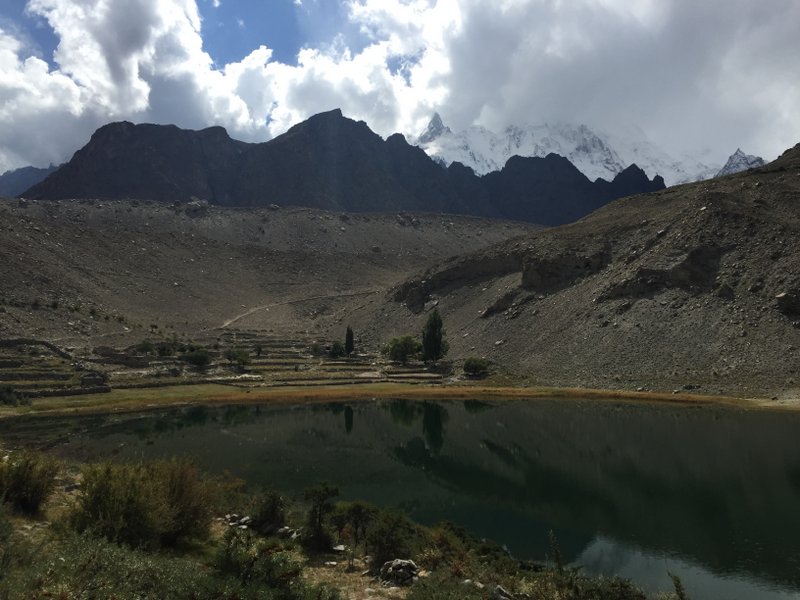 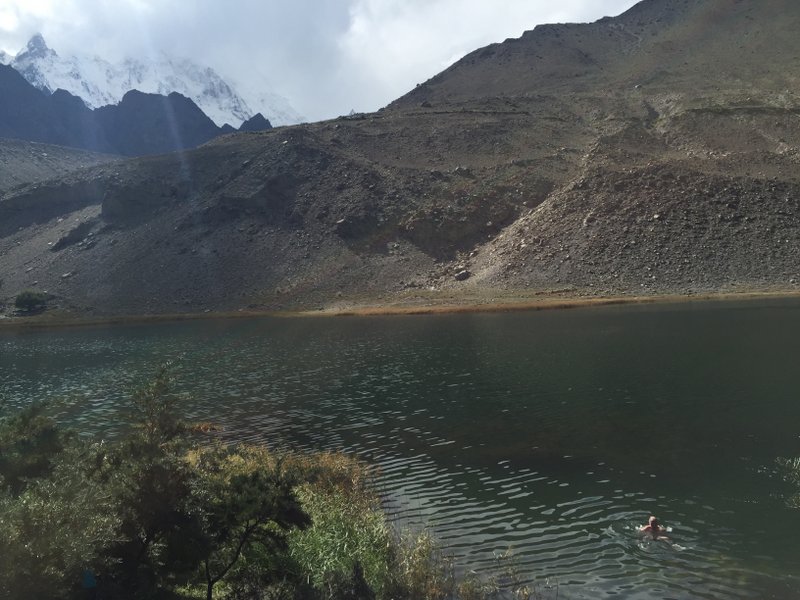 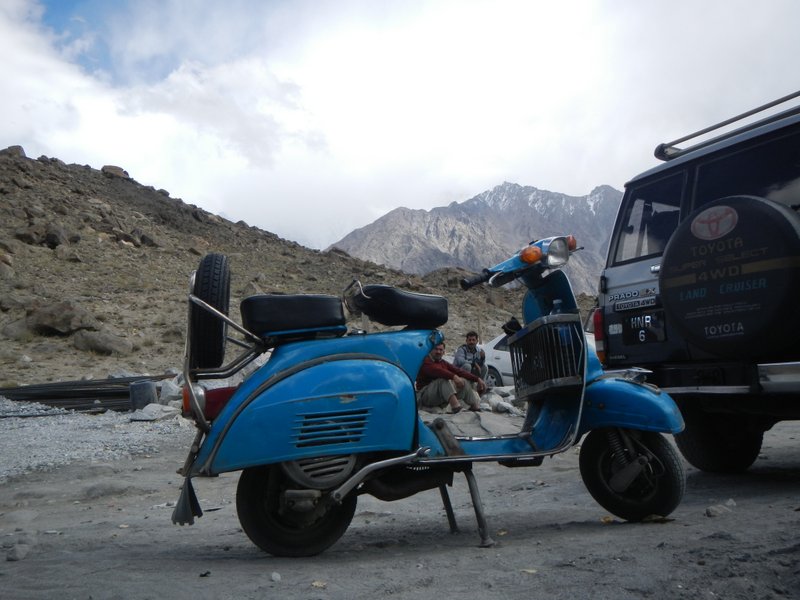 Bomber shaken, ratteled and rolled after the track ride to the Lake, well done you light and lithe power machine. 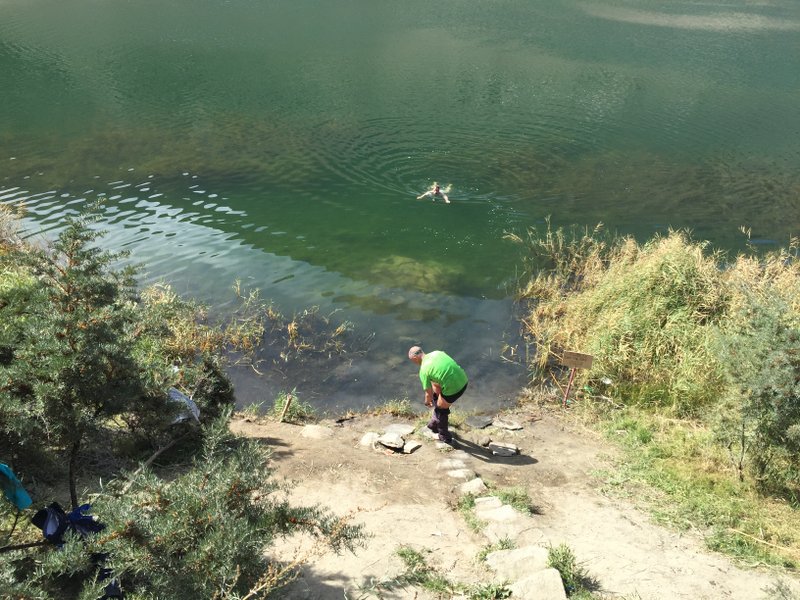 Back into the bike gear. 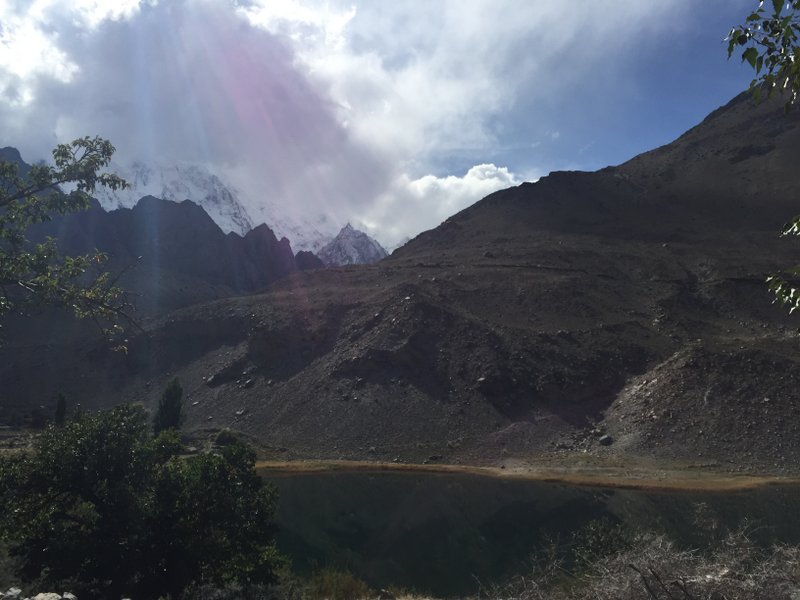 Parting shot of the place of peace. 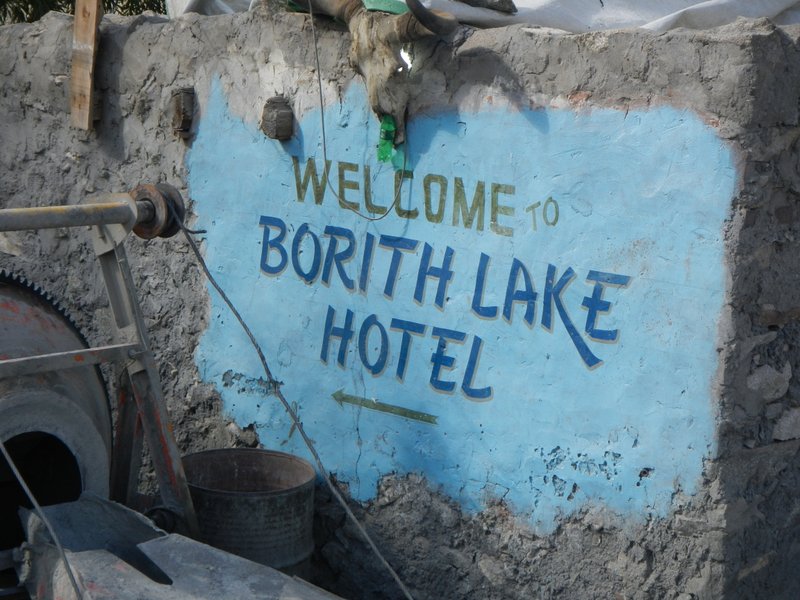 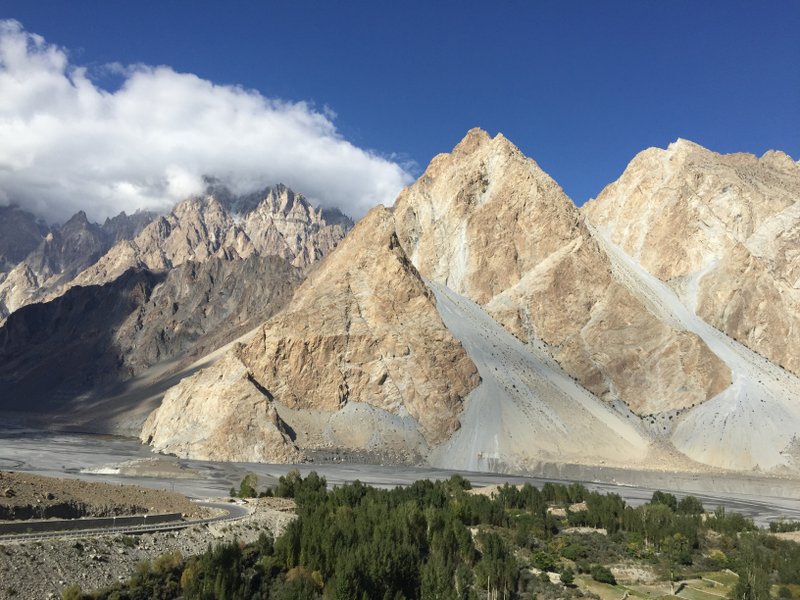 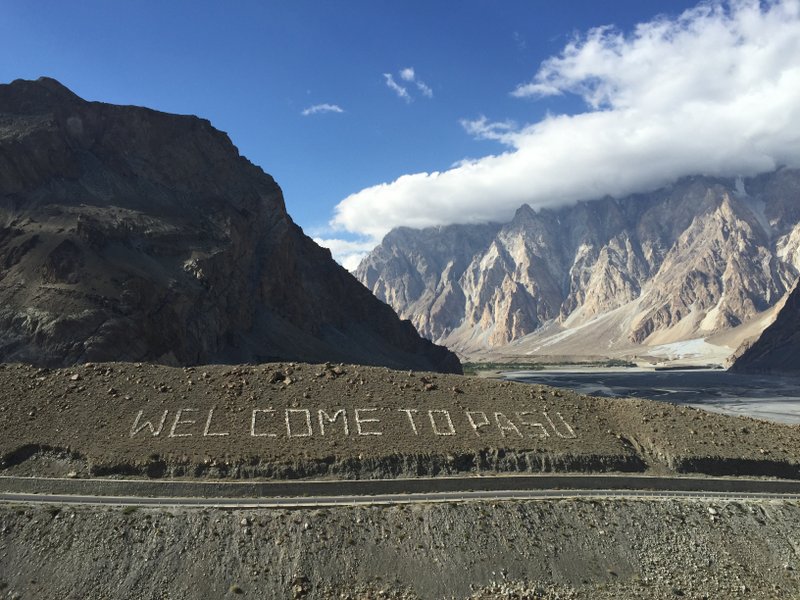 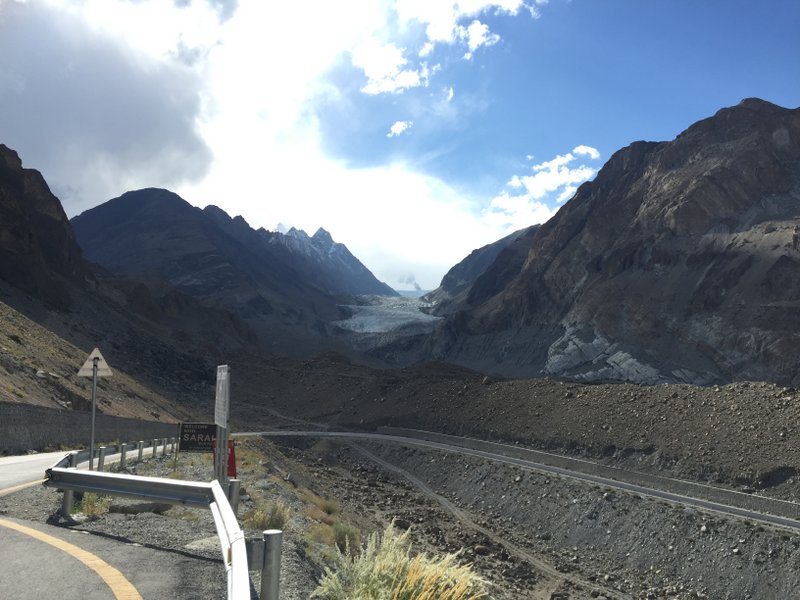 Ice making its way down town. 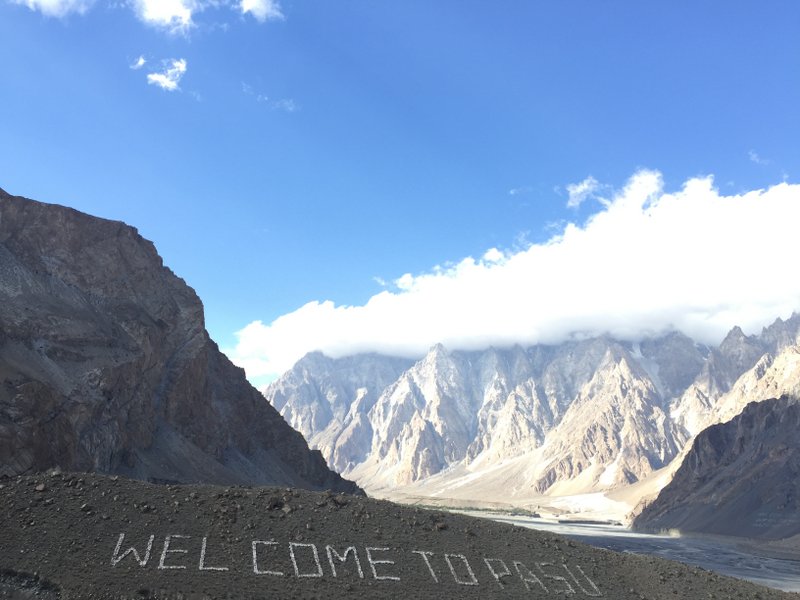 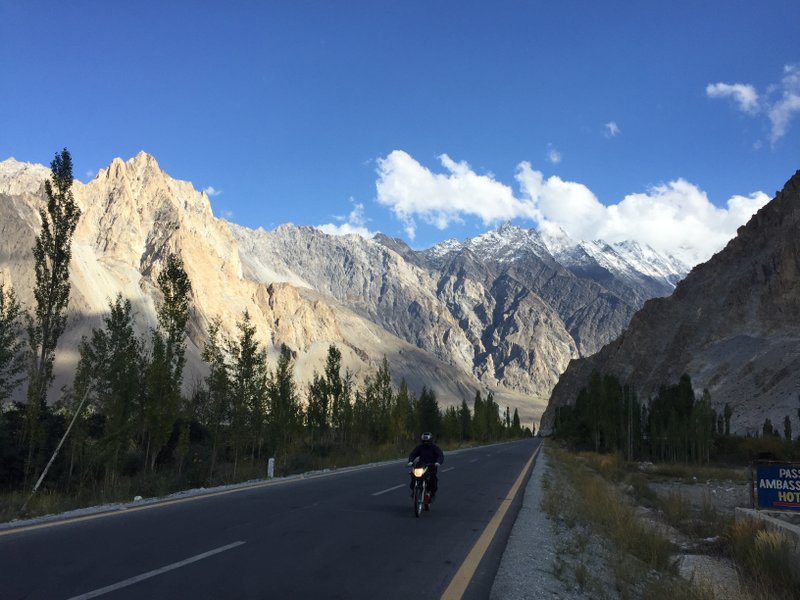 The road that pases through Passu. 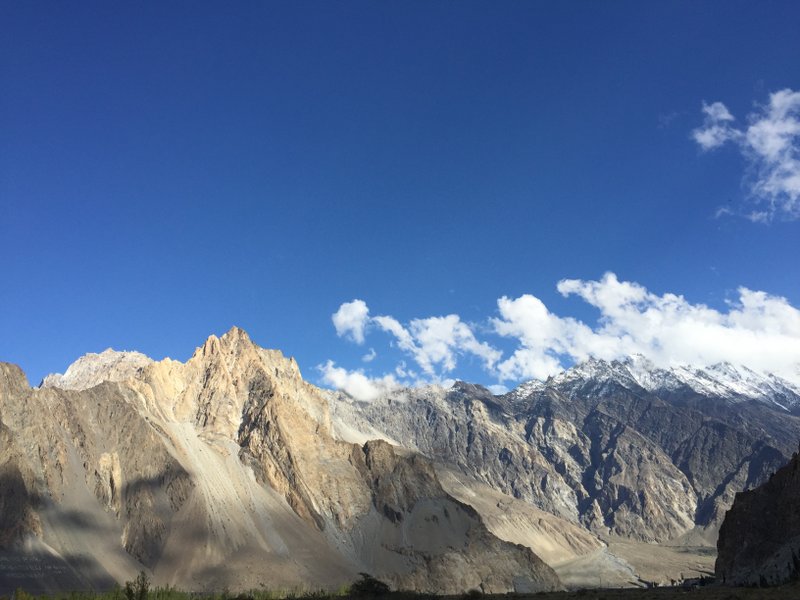 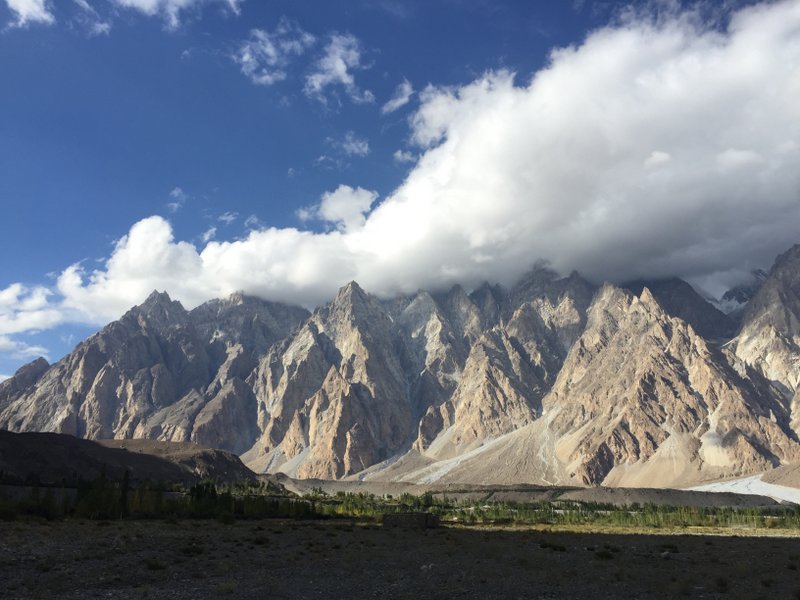 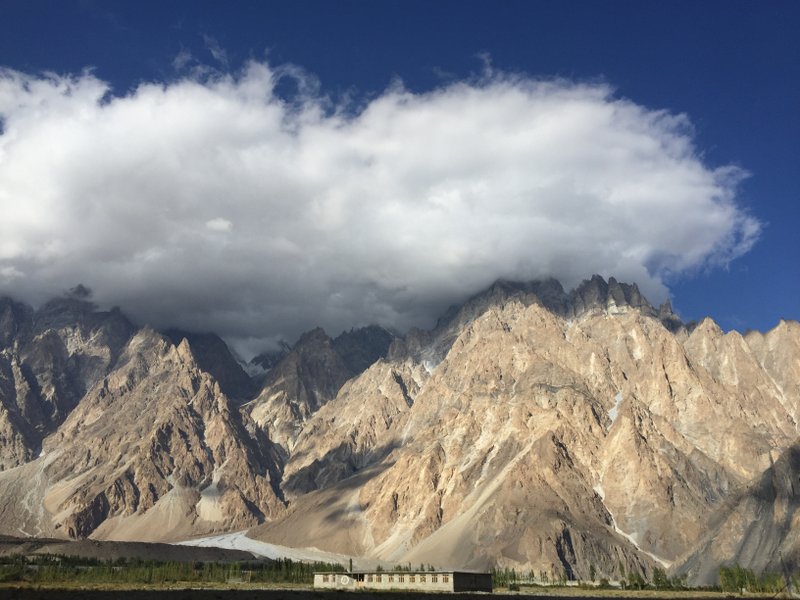 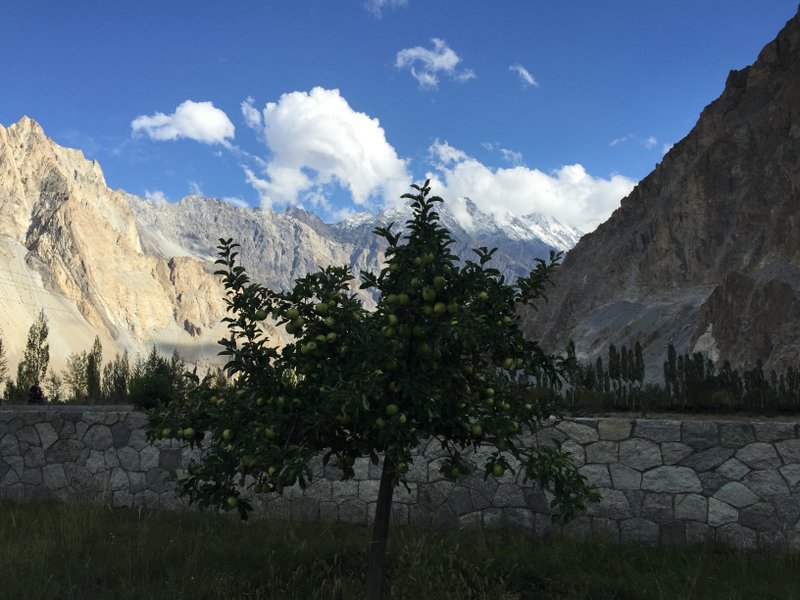 Natures bounty in the gardens of our hotel.

Back on the scooters it was time to get to Passu, arriving at our hotel as the range that surrounds it was taking back the light, the views front, rear and sides that remind you of your insignificance and size in this mighty place. Can you imagine a palace so pure so natural that while you wait for you room keys you pick fresh fruit from the trees that surround your hotel, the skin of the apple no blemish, no discoloration or fade from pesticides just pure unadulterated pureness, our feast was complete, the beauty of our surrounds and the bounty from nature. 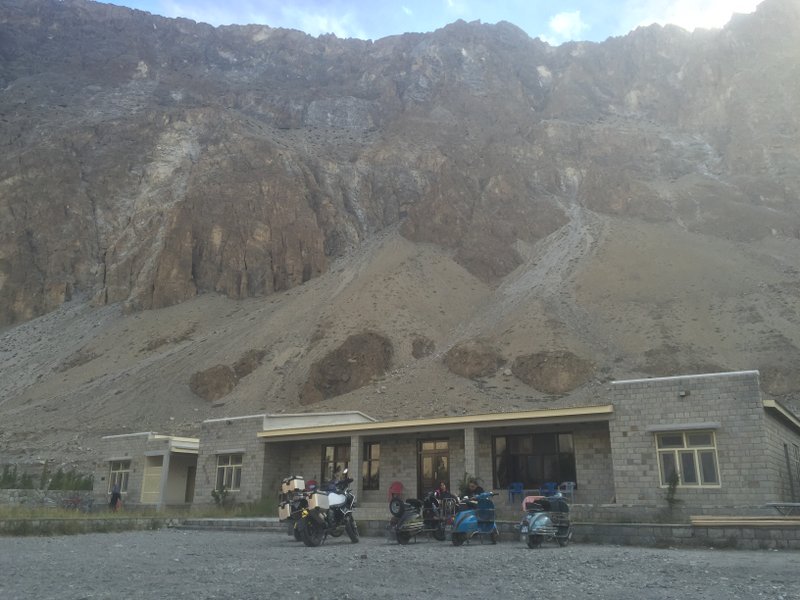 Un packed and looking forward to a hot shower, I stood in my bathroom, shower shoes on and nothing else, I turned on the hot tap, stared out at the snow-capped mountains all around me and said to myself, how awesome this is going to be, the hot water washing over me as I take in the ice and cold of the mountains framed by my window. Back from my snow dream I put my hand out to gauge the temperature, a shriek and a jump backwards, out of the icy water, impossible! the water had got even colder, so half in half out I made the choice, I would shower in the cold water without looking at the snow outside, that made the cold even colder. Washed and transformed by the cold, I felt like I lived beyond the wall so to speak and soon John Snow would  try and ride this white walker down, I am almost sure that my eyes changed to ice blue for a second. 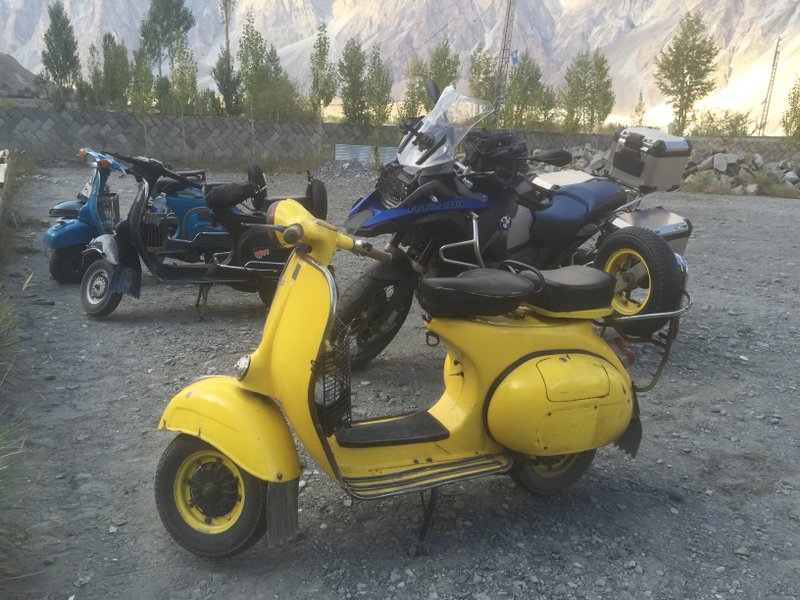 Rubbed and wrapped back from what felt like stage 0,5 of hypothermia it was time for hot chai to warm this bone marrow. I joined the others in front of the hotel, the magnificent mountains all around, we settled in for talk of this place, our day and experiences of Pakistan. As luck would have it we still had Farheen within our company and luck perused us as she agreed to sing for this band of merry men, mind you it was only her voice she had tonight, no instrument’s to smooth the road for her, I took my position up on a flat deck chair my screen the sky, mountains and moon. I raised my cup to enjoy a last seductive sip of chai, lay back closed my eyes with the picture of the mountains in my mind and let her song take me by both hands and heart to show me this land. Words I could not understand verbally but felt easy on my soul as she drew a story of life in the stars. I felt the emotion of the story as she set the story free in breath, so she sang and I followed her words the chariot to the stars. She kept the cold at bay, she let words soften the ice, her song let me rest amongst the stars, a hammock they made and  in a place so magical I let my mind free, to see, feel and be. 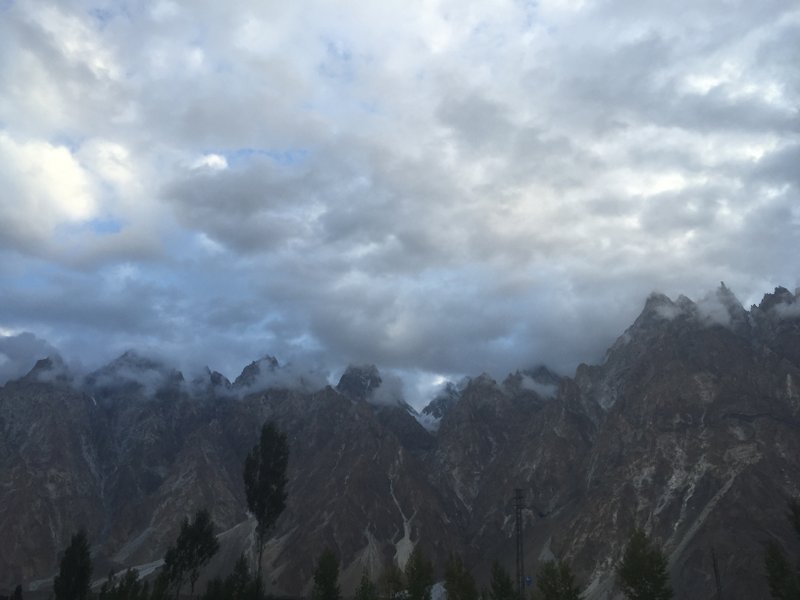 Tucked in while the sky rolls in.

Outside turned cold as dinner was announced, what a treat the wholesomeness of great food and people. We would feast as these mountains hold witness and dinner would take us to America has talent and the great beauty of Italian sophistication. To our surprise after dinner we all move outside to enjoy our chai under the stars and Tom who would put the stars back into the night with his voice that would take us from a speakeasy in the USA to Milano and all that is magnificent in between as he serenaded mountains reaching for the sky. Thank you Tom a spectacular way the end a day full of magic.

I was looking forward to tomorrow for two reasons, firstly I had organised a bucket of hot water for my morning shower and secondly we are riding to the Khunjerab pass sitting at 4934 m to the border that allows entry to China and apparently one of the highest paved roads in the world. With mountains, moon and song I rest my head to dream.

Not so SOLO but close as dammit