On a Vespa that meets museum criteria, roads that seem to only go up and down never straight or flat, a close to 250 km run is a full day affair, with this in mind we left early and would enjoy breakfast and surprises on the road.

Little landslide to start the day.

The morning started with the clean still air holding the scent of pine, quickly being replaced by that wasp two stroke sound and the smell of four stroke oil that should be two, that tells you that your ride is ready. Within no time we had passed the remnants of a mini landslide and made our way higher in to the mountains. 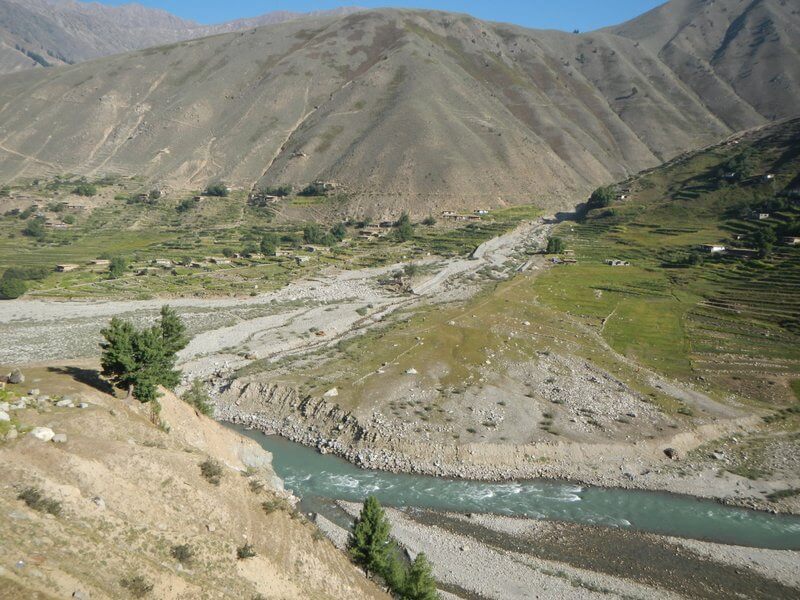 The road out of Naran . 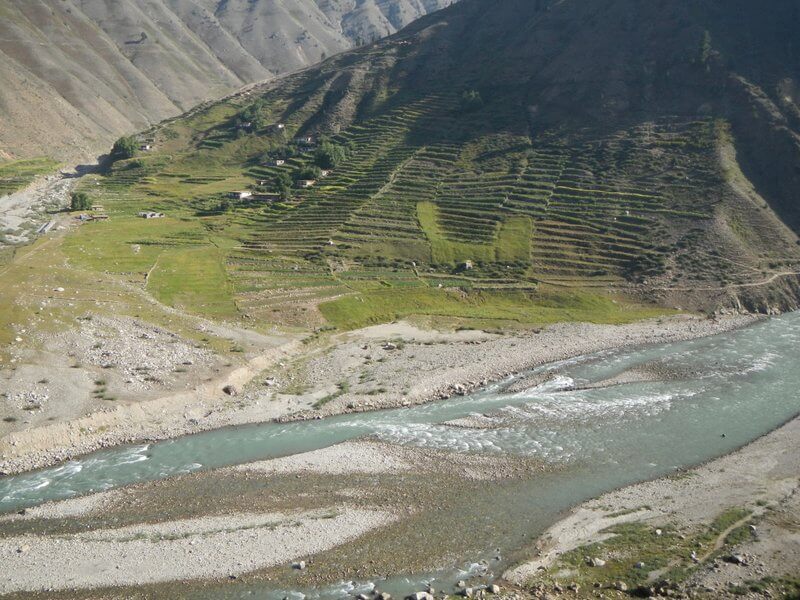 As we came over a rise I noticed a lot of activity in the valley below,on closer inspection what had transpired was that a truck both laden with cement and art had crossed the bridge, as they have done before only this time it buckled, bent and broke, leaving the driver shaken but all else lost including our way of getting across. 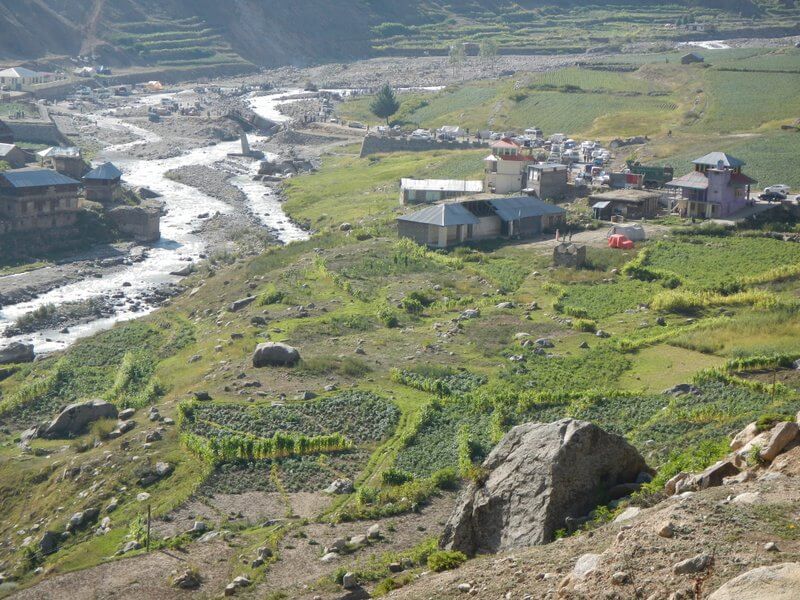 Looking down upon the bridge that was no longer. 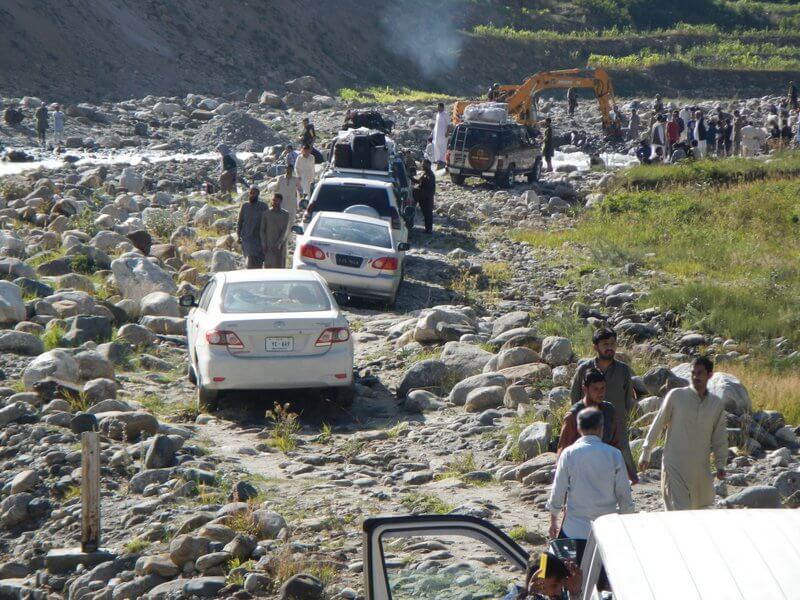 Hard at work making a road. 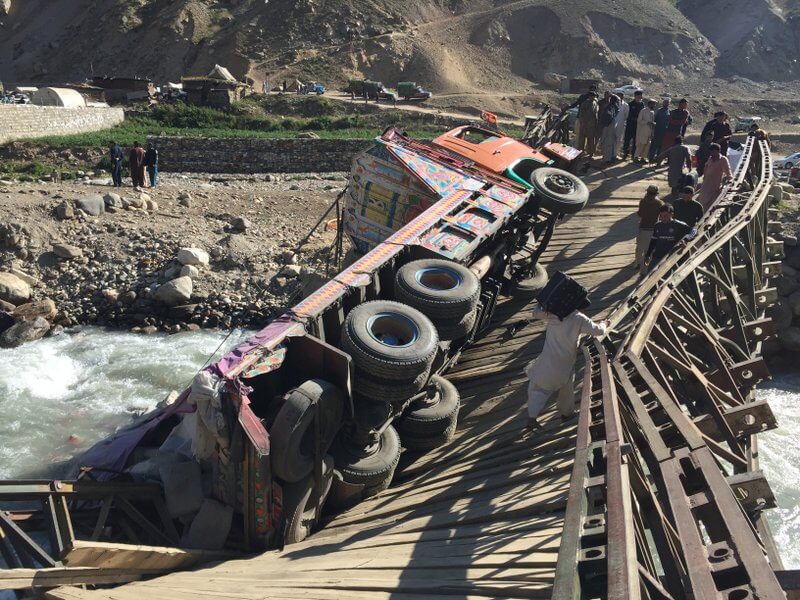 The bridge of sighs.

That been said spending time with all of my fellow stranded travellers was fantastic , many conversations , to many laughs to mention and a fantastic encounter with Ahmad a professor from Islamabad and his riding companion Khan ( Please forgive the spelling if incorrect) When we thought it would be hours before the front end loader would complete the makeshift road , Ahmad and Khan organised a tractor and trailer to get our bikes across, the start of yet another fantastic opportunity for more local interaction. 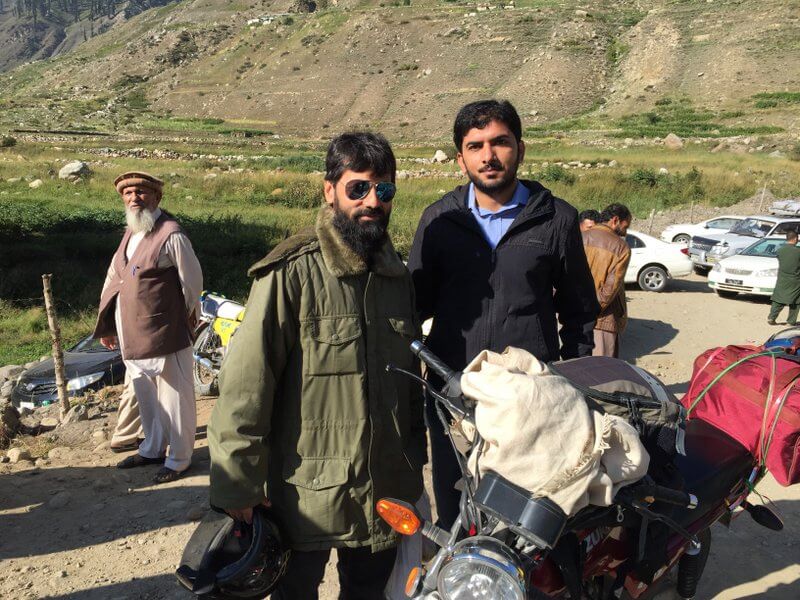 Ahmad and Khan the guy who would get me to the otherside. 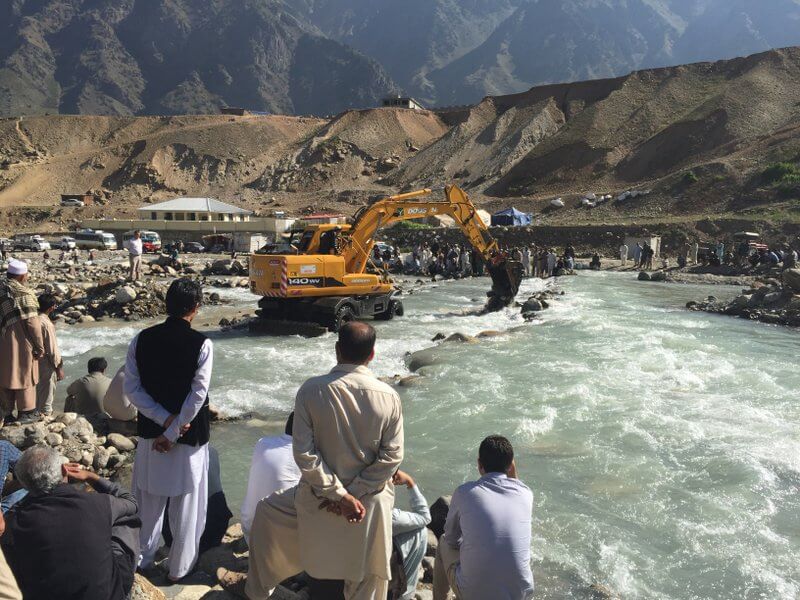 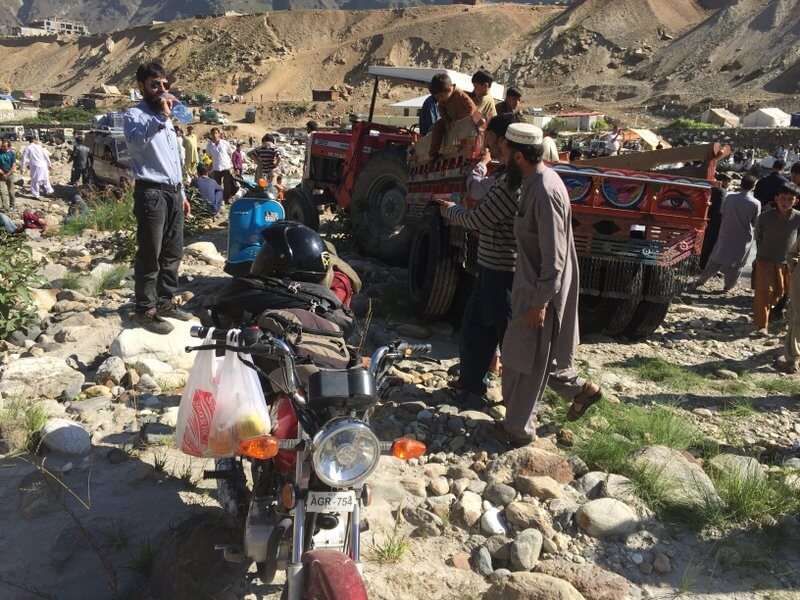 Tractor and trailer to get us across.

The most amazing thing about the day and Pakistan in general, it that firstly help is never far away and secondly help is offered long before asked. So Bomber, Ahmad’s bike and the three of us, one two, three on to the trailer we are hoisted for a very rodeo ride across to the other side. Once across I waited for the other guys to get across and then we would ride on. 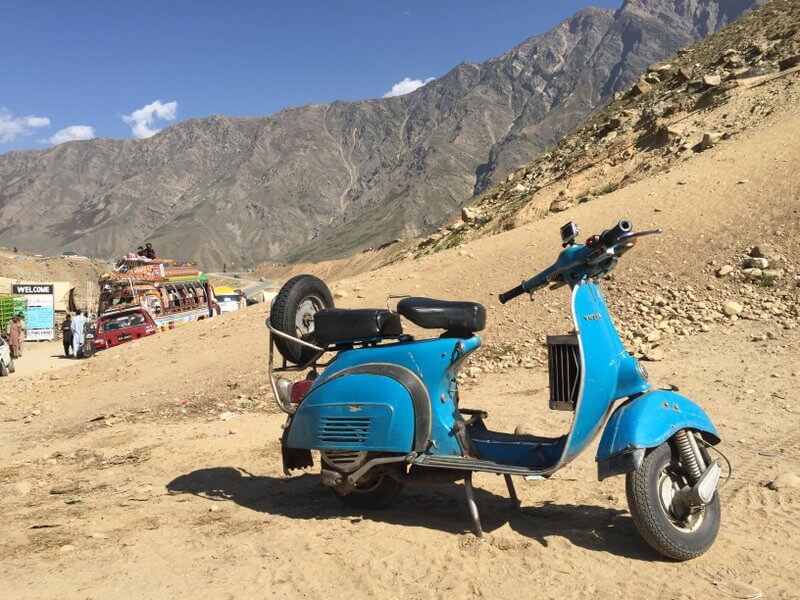 Safely across on dry land.

Ahmad would not take a rupee, he settled the account for getting the scooter across and would not hear of any payment of any kind. A guest in my country he said I cannot accept payment and that was that. What I have come to love of this country in a very short space of time is not just the generosity, sincerity and kindness of those you meet but there is a wonderful pride that lives in Pakistanis, a pride that runs deep as the countries beauty and as open as the people’s hearts. This place will amaze any traveller. Ahmad had recently taken delivery of his new Honda, had packed a few bags, some with snacks, some with clothes, he and Khan had jumped on the bike and a road trip was born, and this was something I was going to encounter more and more, fellow rider’s road tripping around their country soaking up the spectacular beauty of this land. 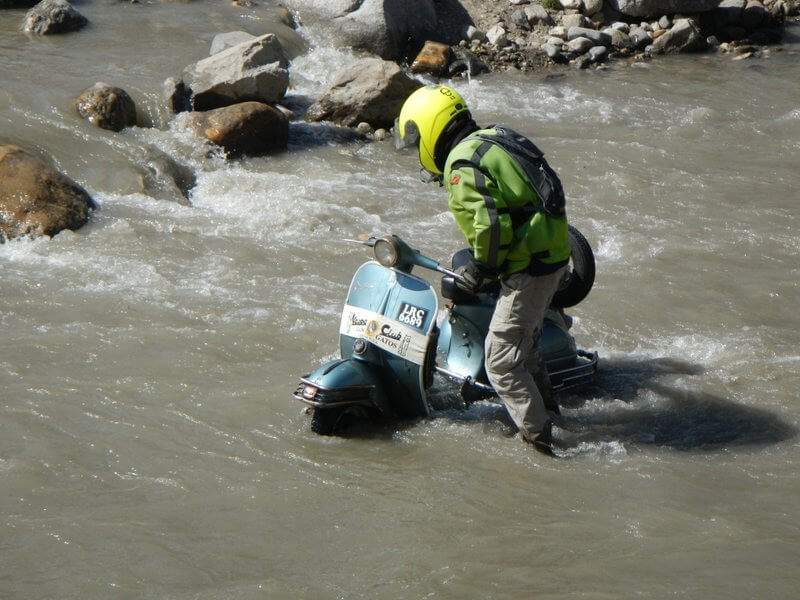 Tom making his way across. 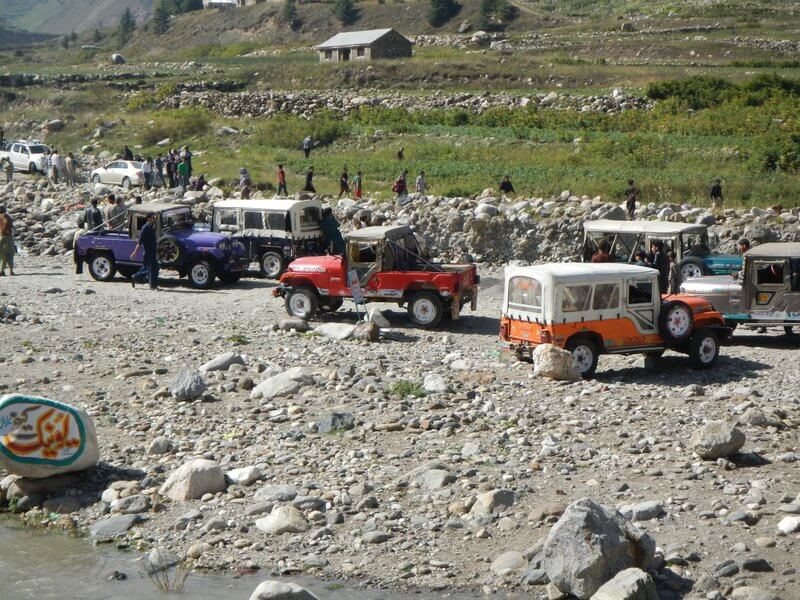 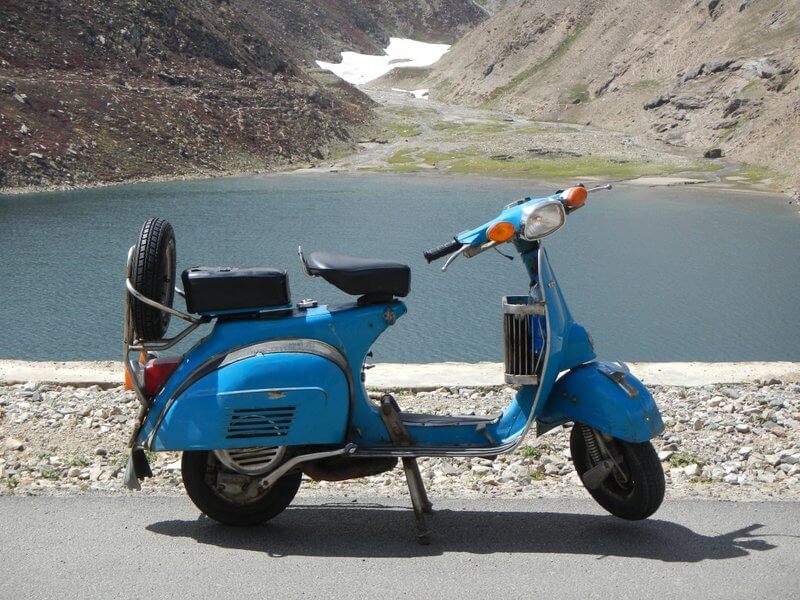 Bomber at lake Lulusar , snow in the background. 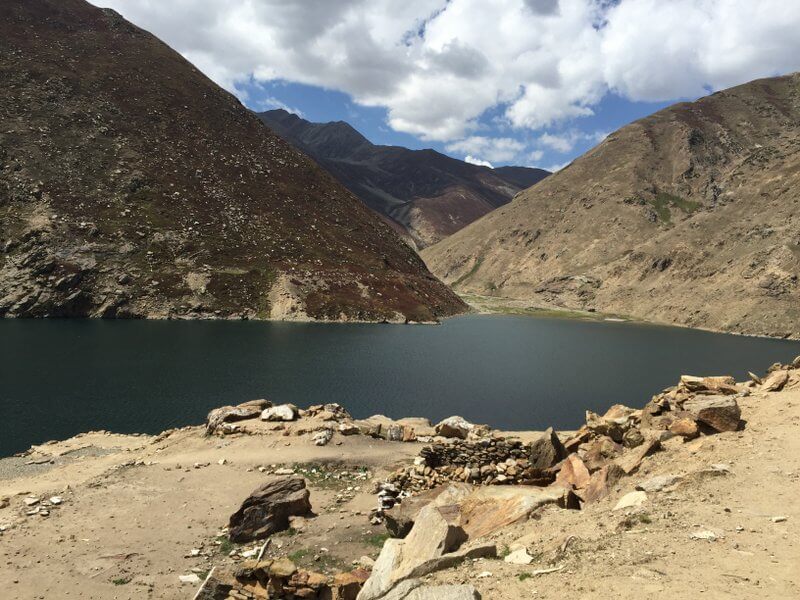 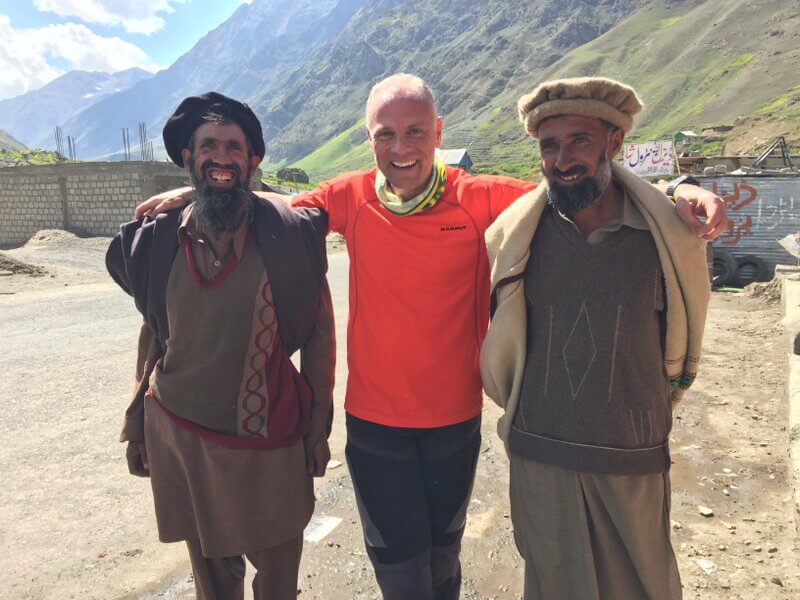 It did not take to much to get a smile from my new friends on the mountain top,could it have been the shirt.Iam told in fashion circles this is known as colour blocking. 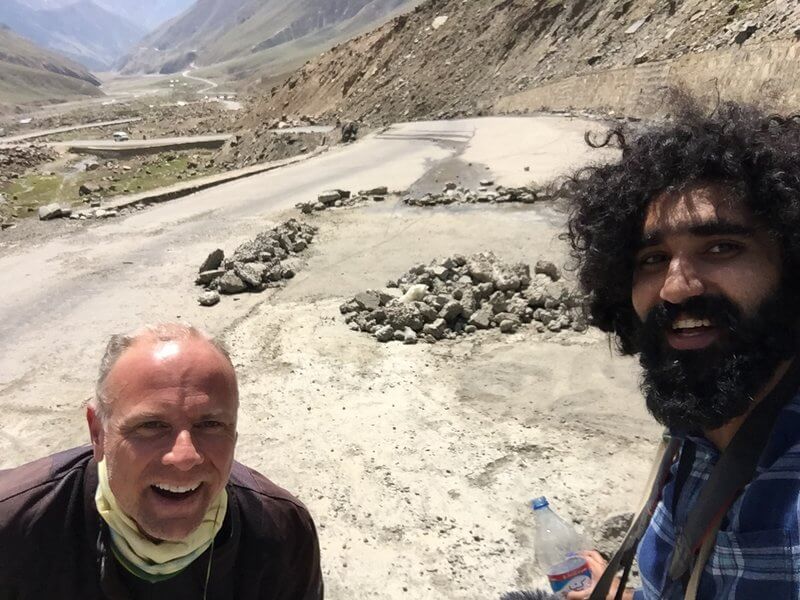 Just after our road dancing, refreshed to ride again.

Back on the road toward the Babusar pass , but first a stop for breakfast , roadside again and then we pushed on , time was not on our side we had spent about two hours at the  bridge of sighs .As we climbed higher Moin and I came across a four wheel drive parked on the roadside with a one of the guys waving us down , so as one does you stop , the reason was that these guys were taking a break from travel , to do what I would come to realise is a part of Pakistani life. The music was turned up loud and there we were dancing on the side of the road to cool tunes and fresh mountain air, the stretch and dancing done, them back in the car, us on our scooters onward and upward.

My almost lunch companions, at the checkpoint.

I stopped at a police check point the last before getting to the top, and this to was one for the books, after introductions I was invited to lunch with the check point chaps, I tried to decline but they would not hear of it, so on the mountain side we lay, chatting, laughing and trading stories of what happens high up in these mountains. When Moin and the guys arrived a little later, I was still relaxing waiting for lunch, only to find out that one of the policemen had been sent back to Naran to buy some naan for lunch and it would be over an hour before his return. So sadly I had to apologise and ride on to try and get to Gilgit before dark. Pakistan is one of the few countries I have travelled where the police and army make you feel both really safe and are extremely helpful. The best way to describe them is firm but really friendly.

An ice,ice cold one anyone, mountain side refridgeration, redbull gives you wings and up hear you need them.

View down from Babusar Top. 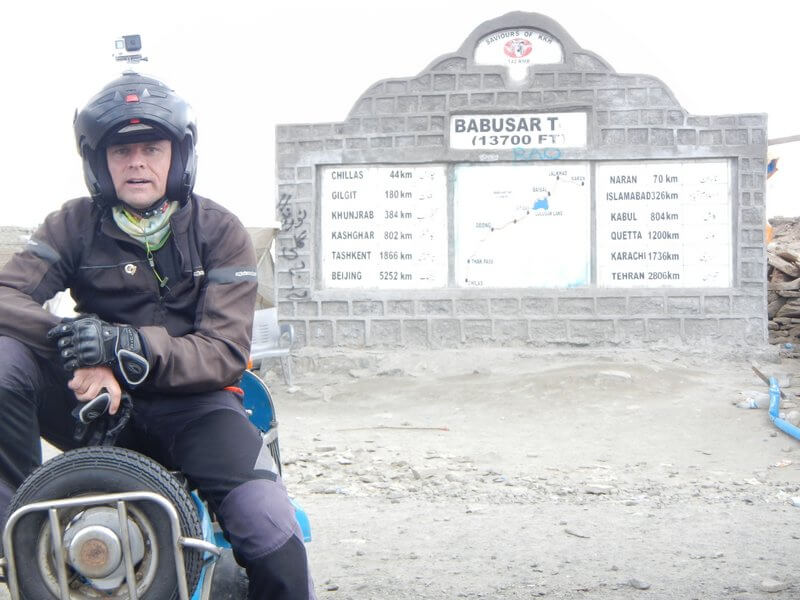 The pause before the down slide. 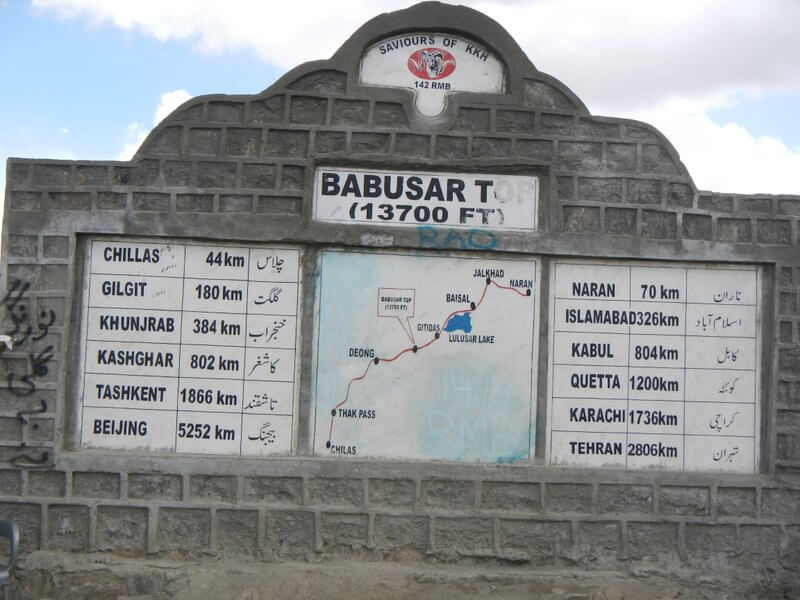 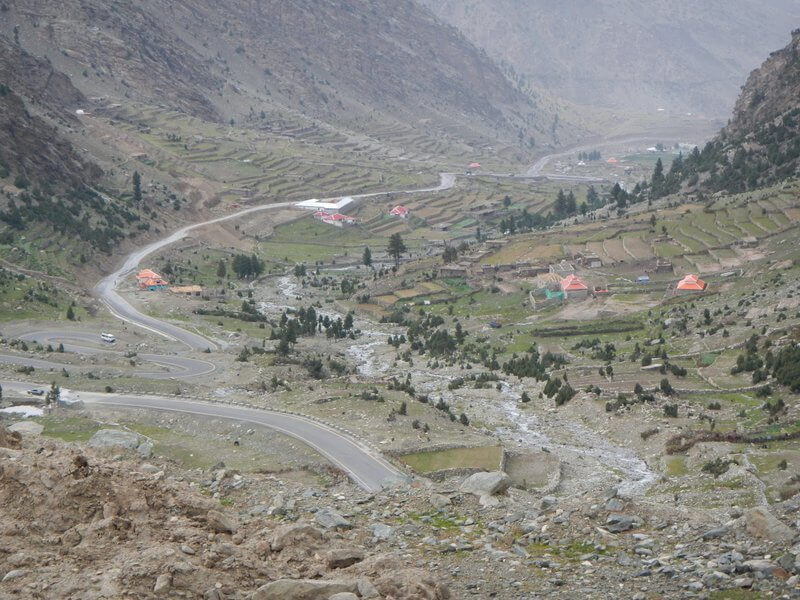 The road that would take us to the kiln. 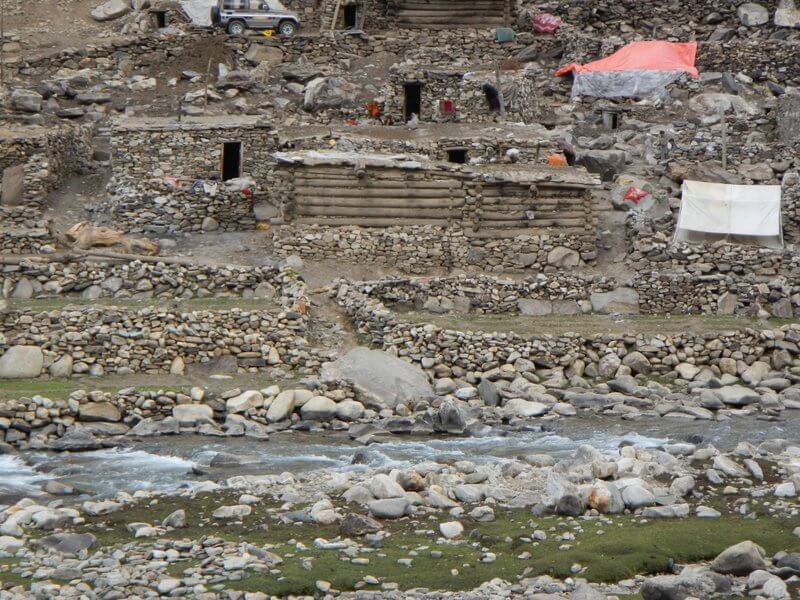 Life on the side of a mountain.

From here it was over the top, a quick stop for passports and photographs then down the other side,the road drops, with homes and life clinging to the mountainside, from the cold we plunged down into the stifling heat of Chilas, so hard to believe that within a couple of kilometres and a hell of a lot of meters we arrived to find ourselves at the fiery kilns door the heat almost unbearable. Water stop then on to try and escape the heat. 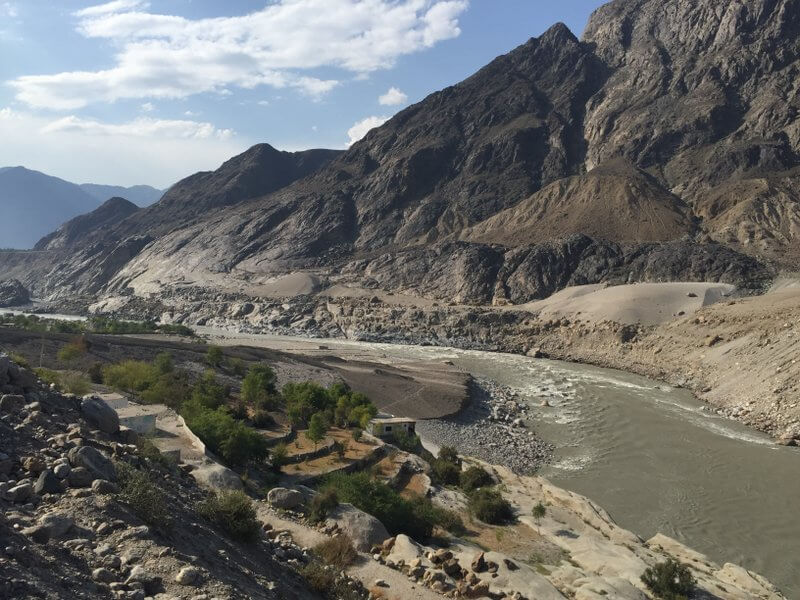 Roadside siezure and the dust storm looming.Bomber just locked up and stopped. 5 min and three kicks off we rode,siezure done.

Just after crossing the Raikot bridge a vicious sand storm came to reclaim the road and all who travelled this path, it was such a stark reminder of when I rode across the Sahara, that hot wind, the sand attacking  your skin and that amazing, foreboding feeling as the sky around you changes into an angry, menacing face screaming at you. Through that thankfully and I found the guys having chai with Ahmad , I was invited to join and after a quick stop we rode hard for home . 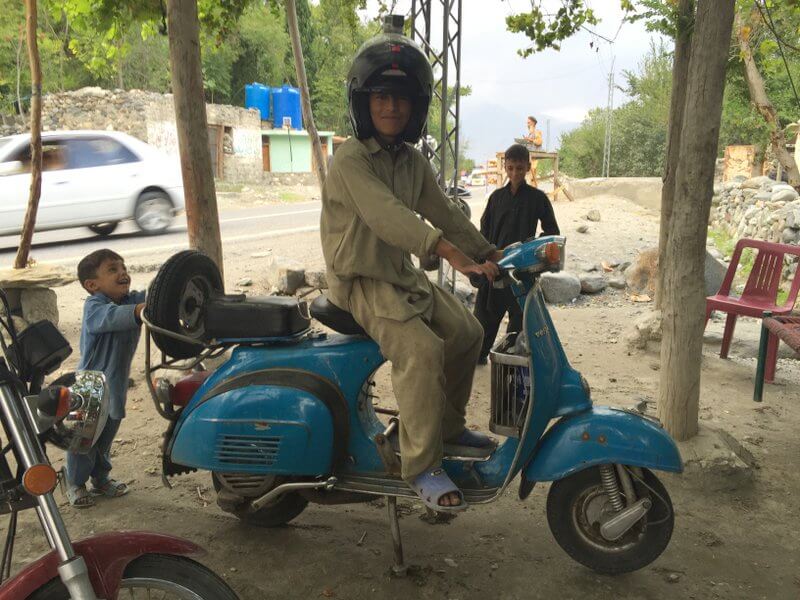 A little fun after the sand blasting.Push faster, I hear him say. 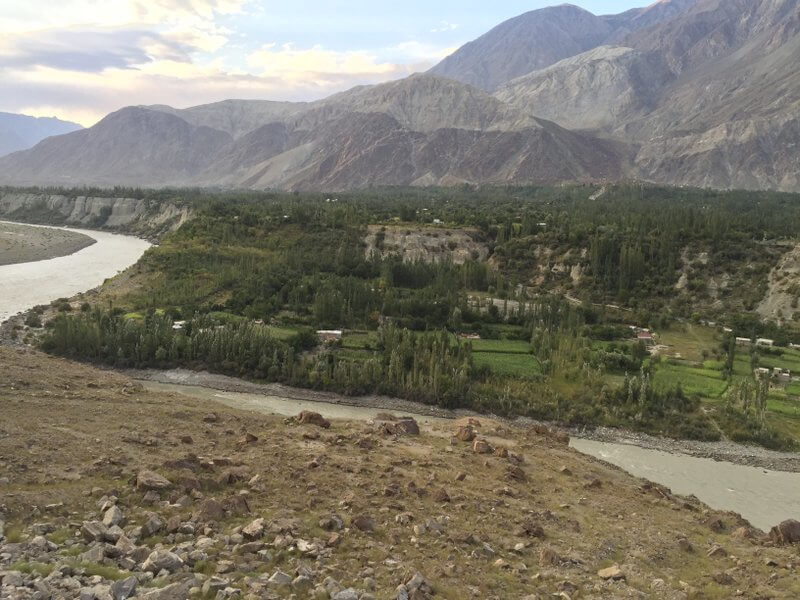 Along the KKH to Gilgit.

Finally, after 11 hours and around 240 km we arrived at our hotel, a welcomed shower to get rid of the grit and the it was out for barbeque chicken at Cha Cha’s. One thing I can tell you is that this guy is no colonel he is a full blown General, he must make the finest bird I have had in eons, never mind finger licking good, if you are not careful you might just lose the tips of your fingers getting that flavour into your mouth, Cha Cha you are a legend. As I write this my taste buds are dancing Pakistani roadside style and I am fantasising about that piping hot, naan plump with crispy, spicy chicken dipped in Cha Cha sauce.

I would ride one thousand miles ………… just to be with you at your barbeque. 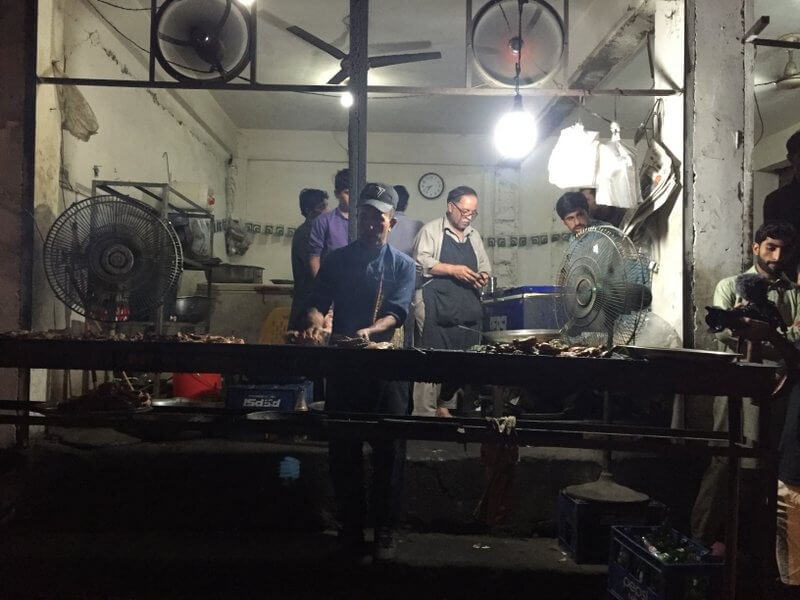 Cha Cha himself prepping those birds.

Just the two of us , scooterist meets chicken king. 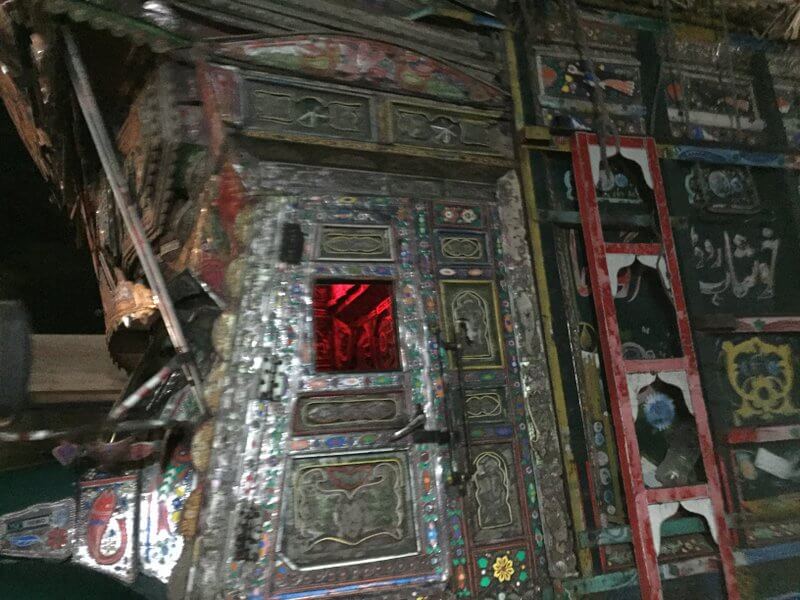 A lot of work done on this side door. 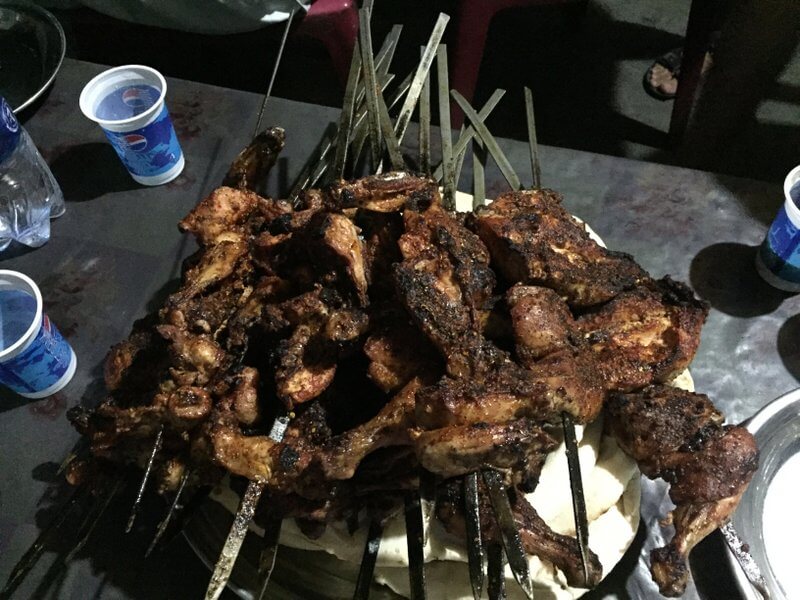 Off to bed to count chicken wings and dream of this beautiful place and people. Thank you for a day that let me feel sincerity, kindness, warmth and generosity.

Glaciers, life, death and no taxes

Not so SOLO but close as dammit