A leopard on the spot

On the road before seven with about 400km to get to the  South Luangwa National Park , I wanted to try and get in early so I could do the late afternoon / early evening game drive, so we put wrist to the accelerator so to speak .  The road to Chipata  is really beautiful with the side of the roads lined with the brightest red pyramids of tomatoes, vitamin-rich sweet potatoes, bananas and all other of rural life’s necessities on display.

What is incredible to see is the amount of pride and effort the vendors put into their displays on the roadside, precision and perfection as you whizz by, lined like soldiers on parade waiting for the customers to stop and shop .  All the while bicycles go up and down carrying maize, coal, children, wood, water and anything else that needs transporting.

Life along the road

What caught my eye while riding were the bicycles that I passed so I decided to stop and find out more about these rides and riders – so Vic and I pulled off for a chat . 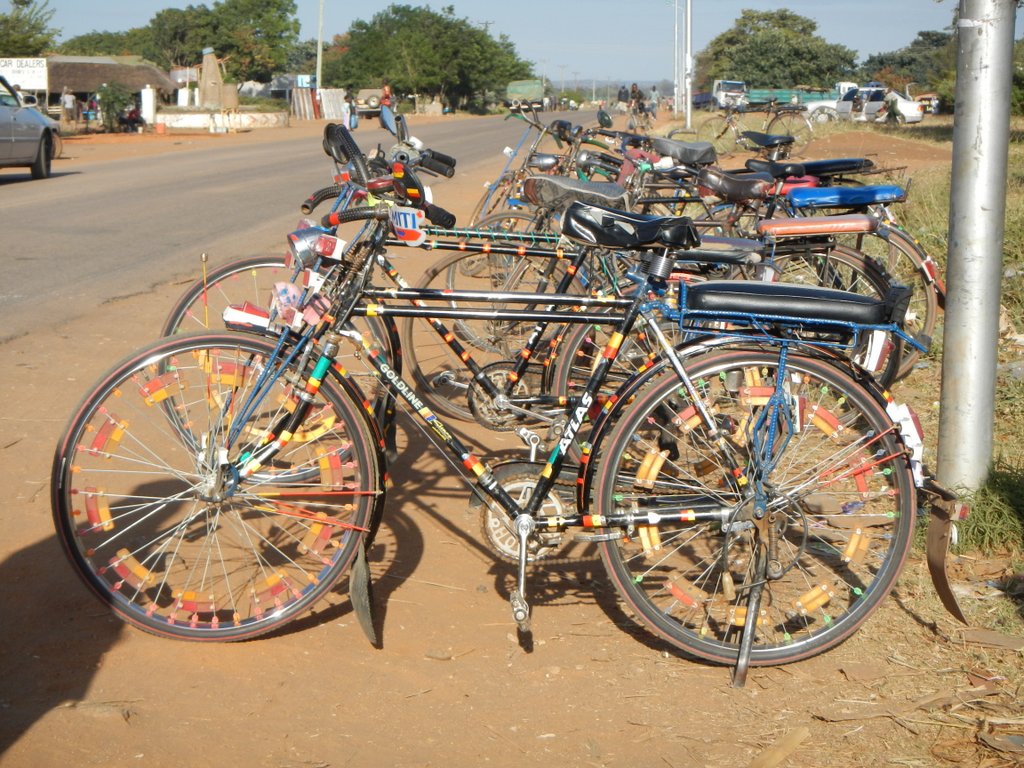 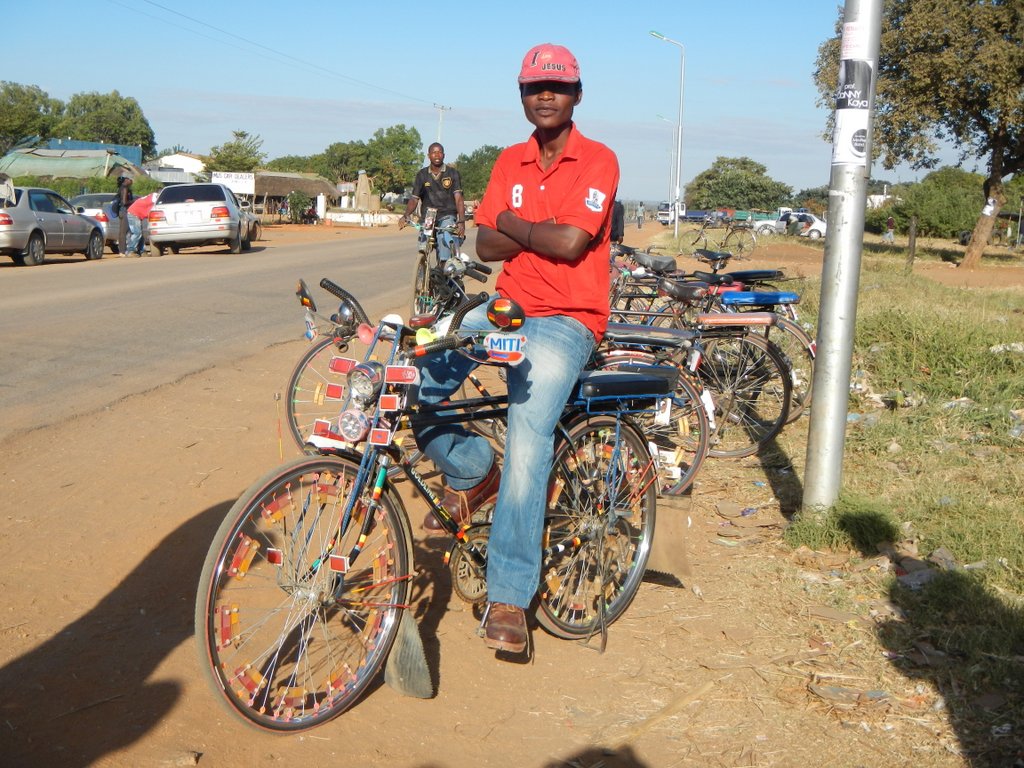 The proud owner with a very posh passenger seat. 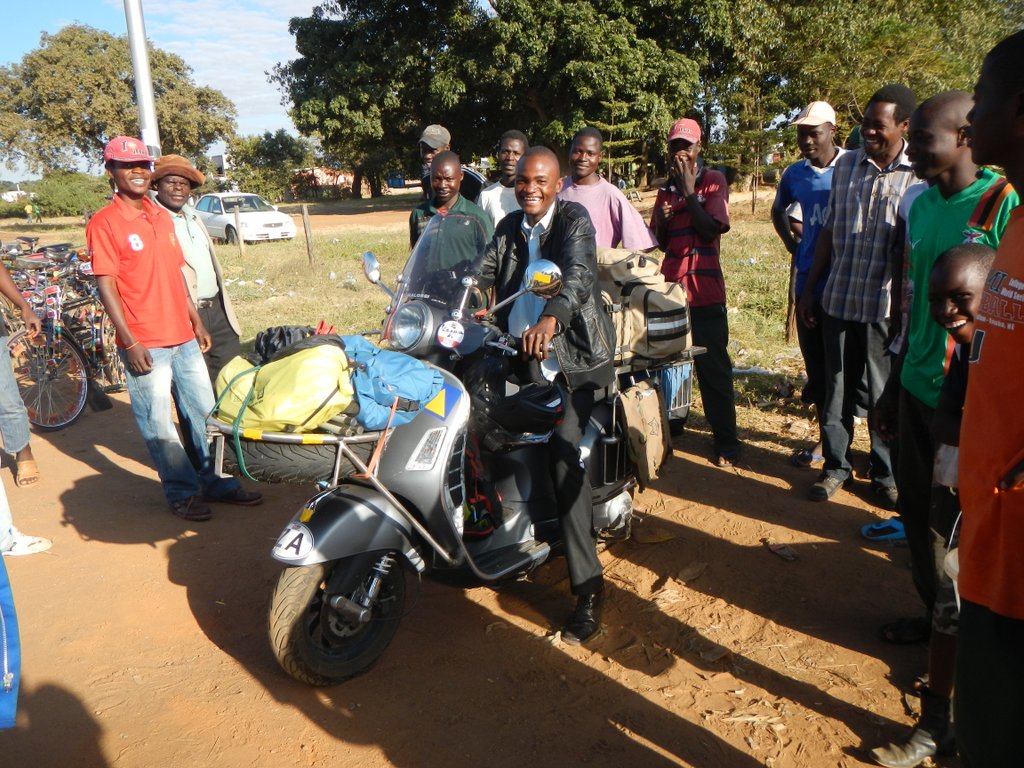 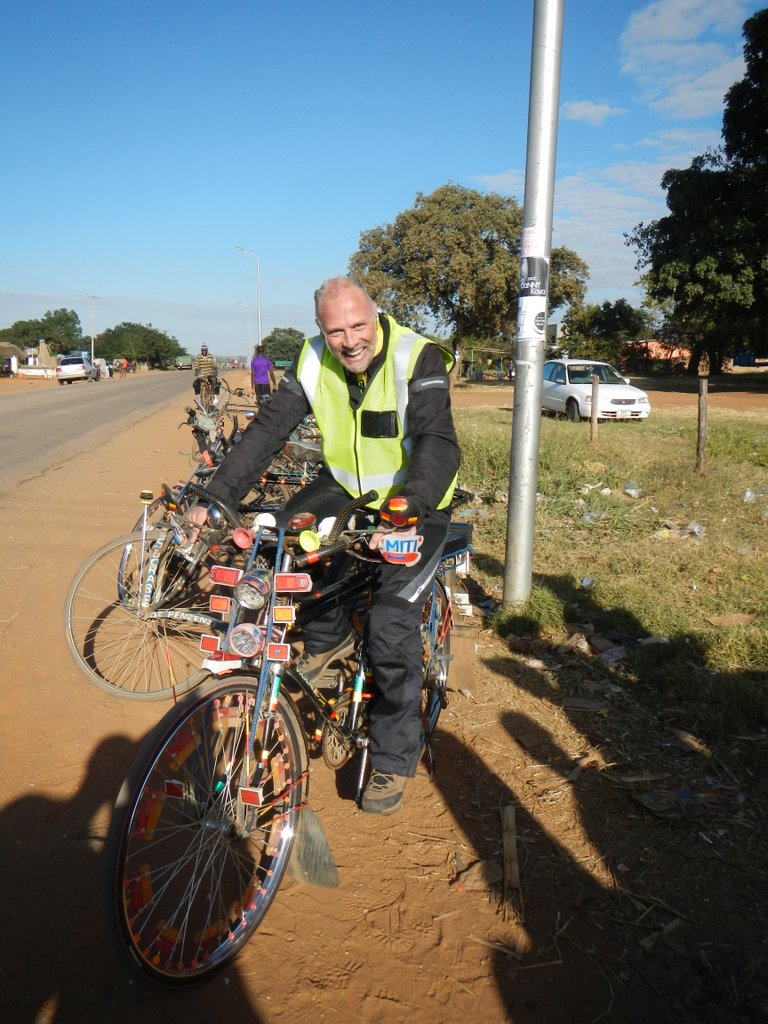 Much laughter all around

After hanging out for a while and having to answer so many questions about “Where is the engine?” ” Wow it is automatic!”, “How come it took you so long to get here when the speedo indicates the scooter can do 160 km per hour?”.  I had to explain the 160 was a little lie really and that 70 km to 80 km per hour was more realistic  – eruption of laughter at a speed not much faster than their bicycles on a downhill , and visual disappointment that the speedo was not accurate! I tried to redeem the situation by explaining that the scooter is carrying so much extra weight and that’s why I had to travel slowly.  As far as they were concerned their bicycles could carry what I was and they don’t sport a 300cc engine under their bums . Argument lost it was time for us to ride the rest of the way to Chipata.

I was looking forward to my arrival in Chipata as I was really craving a cappuccino. Yes I have realised caffeine  really is addictive – realising that I had just ridden over 800km to get my next fix. I arrived in town,  met up with Jacob had my two hits and was back on the road to Flatdogs Camp where I was going to stay for a couple of nights. 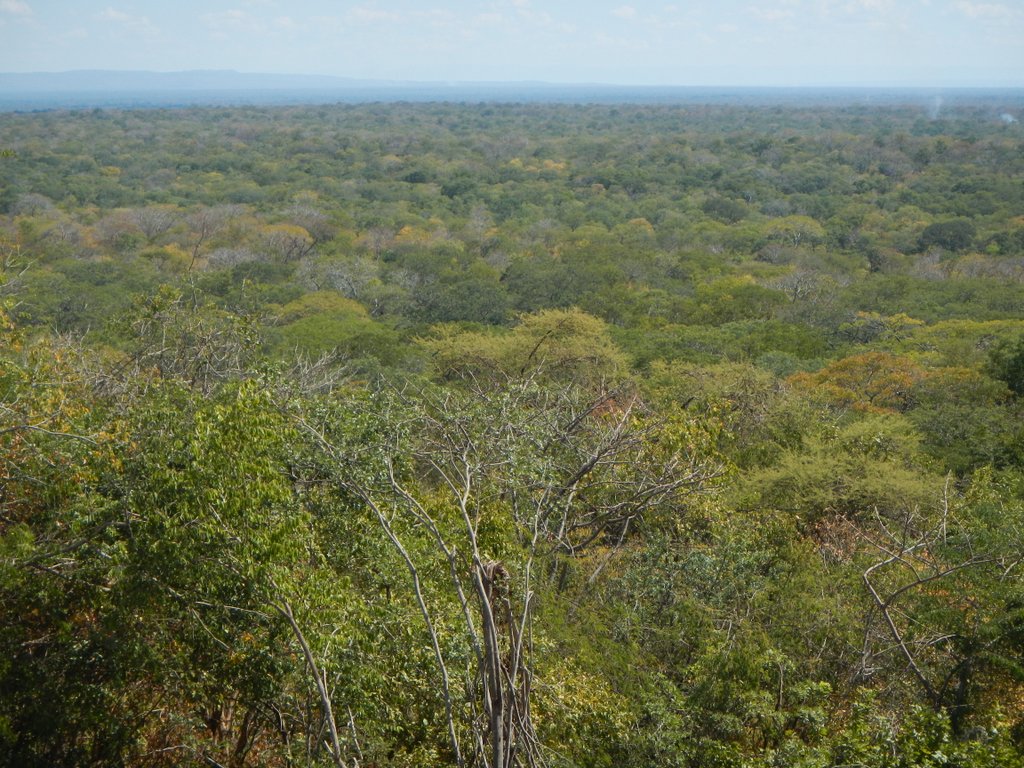 Luangwa valley opens up before my eyes 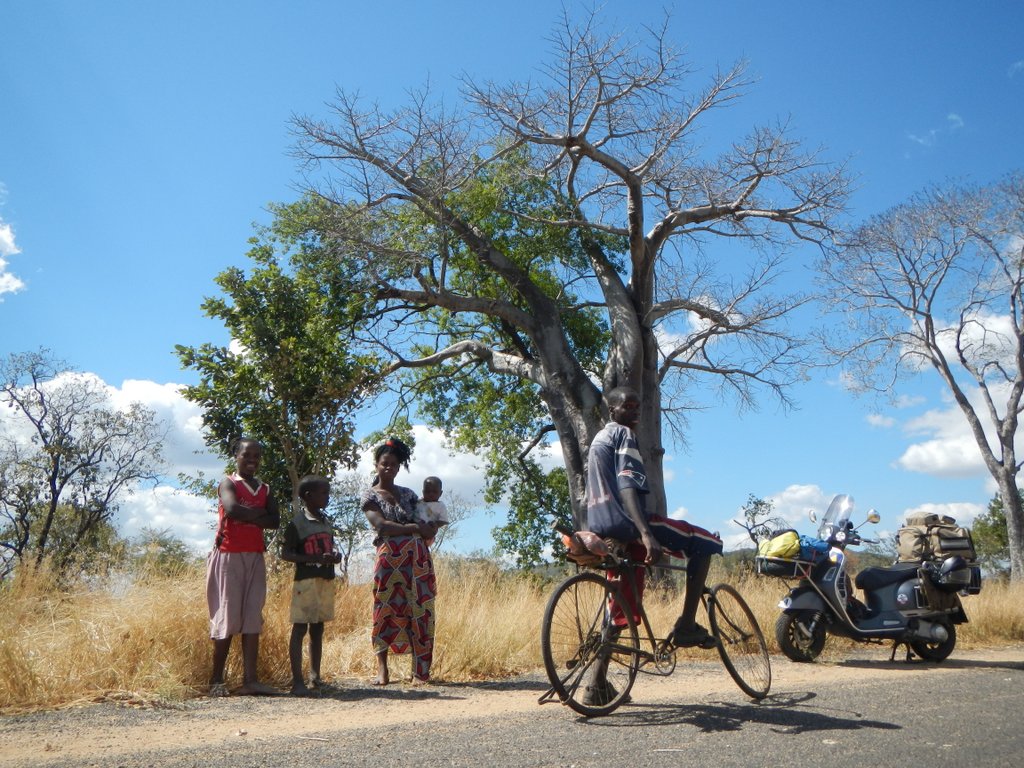 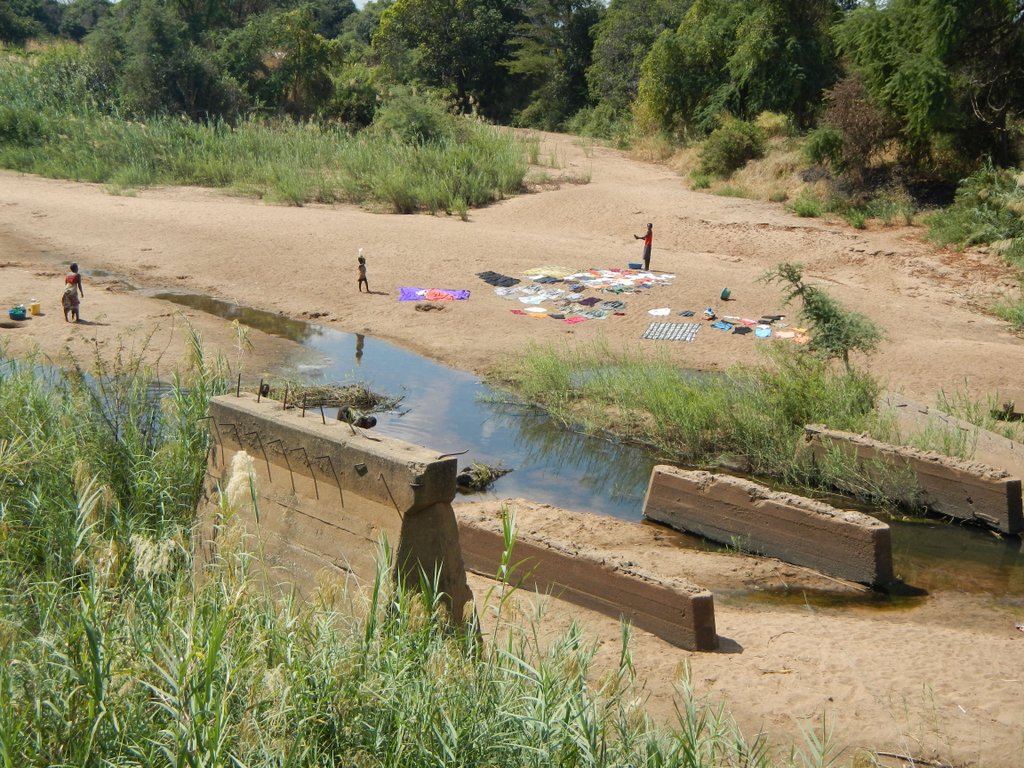 Laundry in the summer sun

The road was good so we made great time and by 14h00 we arrived at the camp on the Luangwa River in time to shower, hand in my laundry and get on the game drive . The feeling you get when walking  around the camp is one of real bush, real Africa, real relaxed and respectful to the nature that surrounds it . 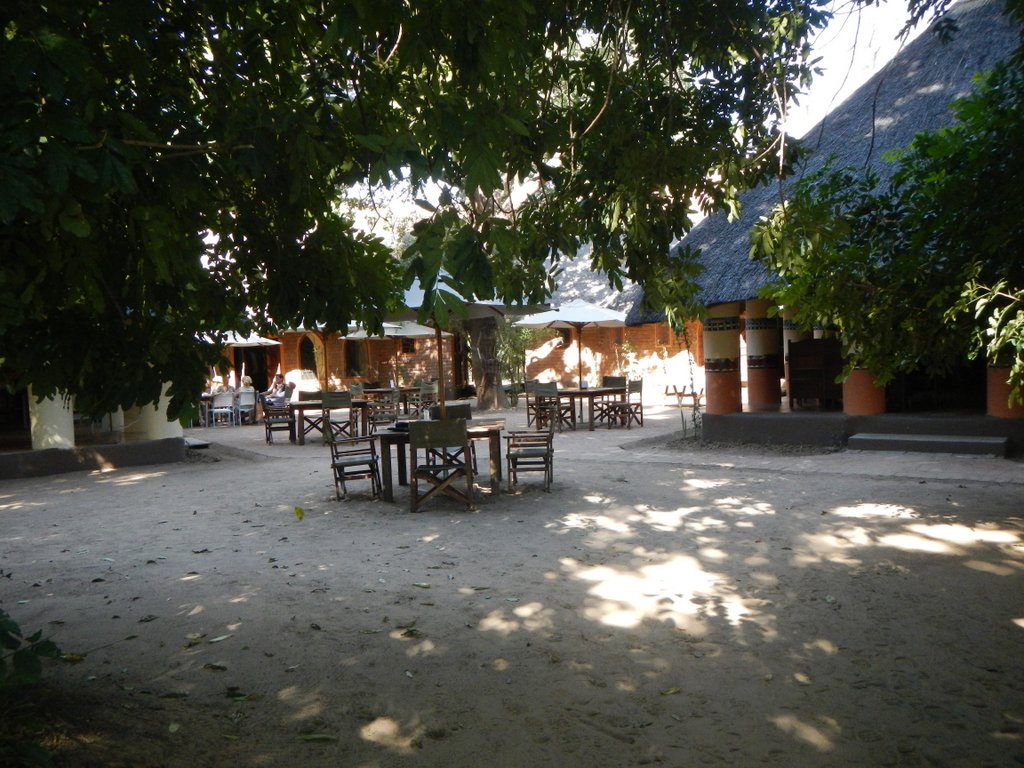 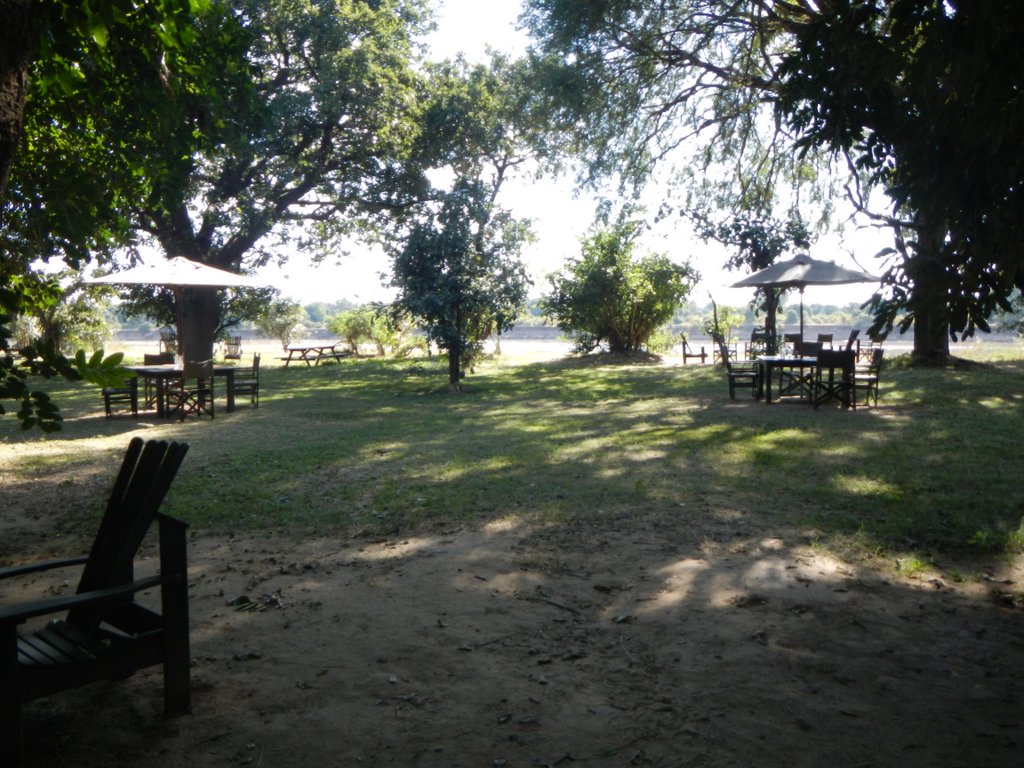 We left on the game drive at 16h00 just after afternoon tea and cake –  and it felt fantastic to be back in the bush and off the road for a while .  The drive was fairly typical as far as game drives go – the stop for the sunset, the usual suspects… and then the stars started popping out like pin pricks and suddenly the sky was alive with light and then darkness fell all around. 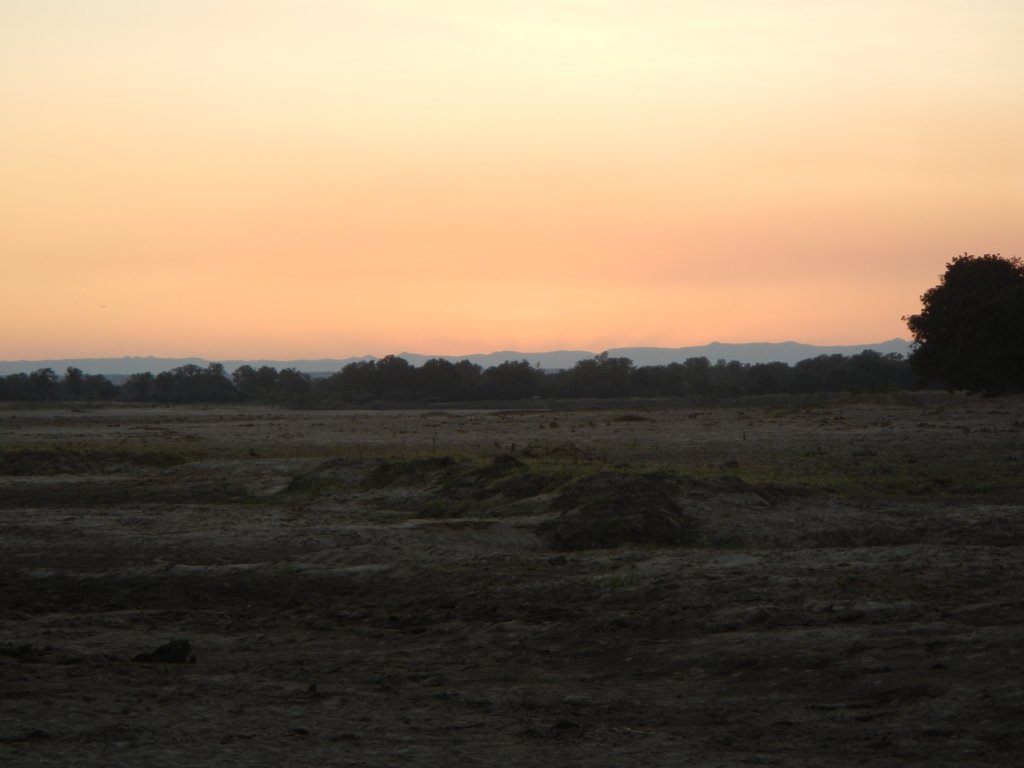 Sunset over the river

Out came the spotlight and after a little while of driving we happened upon a beautiful female leopard sitting in a small gully eyeing some puku to her left and to her right. Off  with the spot and on with the low- glow red lamp that keeps the playing field even as prey can’t see predator and vice versa but we nightblind humans can look on intermittently as the light gets turned on and off whilst tracking the hunt . When the lamp is off you can’t see your hand in front of your face so hidden are you below the stars .

Suddenly she was up! She had chosen her prey and just like that, without a sound, she was gone in a dark silent invisible flash of movement. When our spot found her she was only about 25 metres  from dinner. So we, the blind bunch, moved in on her as she moved in on her prey. We parked right next to her, off with the spot. And so we sat in total silence waiting for death to scream .

Red light on, 10 metres,  red light off,  darkness, still not a sound, just oblivious crickets chirping while death stalked. Red light on, she launches, still no scream. By the time the spot found her she was 50 metres away from us and her prey. She had launched so stealthily and with such focus that she was able to change direction and leave her prey as she realised it would not be a kill – and so not to put the buck on high alert she aborted to circle and try again.  Lucky puku, unlucky leopard, devastated human  – no bloodshed to arouse our ancient  inner core to the hunt .

Deflated we turned the cruiser home to catch our prey on a plate. All that was left was to enjoy the star -congested sky above while letting your mind wonder to what could have been.

So prey digested, to bed and to rise at five for the morning drive .