That night the rains came with such force that I was woken three or four times , luckily by eight all had passed , the sun was out and after the hotel had broken  my  door down I was on my way . The key had broken off in the lock when I had tried to unlock it . So my day started cold shower , door smashing , no milk for coffee , no butter for toast , but the sun welcomed us to the ride. 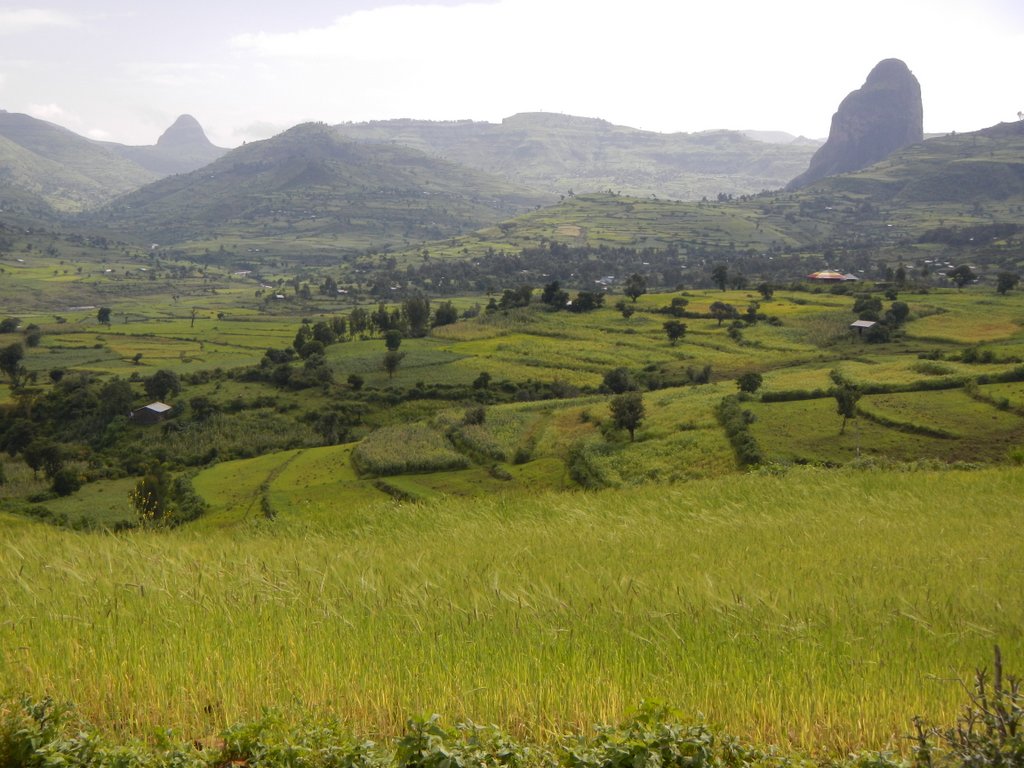 The ride would  be very busy and stressful as I had come to expect in this land of Ethiopia  . The difficulty riding here is that the roads are so full of people , all kinds and modes of transport , animals in their  hundreds , donkey’s that make you dizzy with fear of collision , goats do roam and I mean everywhere , the cows are herded to market in your lane , it is just so full that you can never just relax and ride , you have to be on guard and very  sharp every second , exhausting it is . 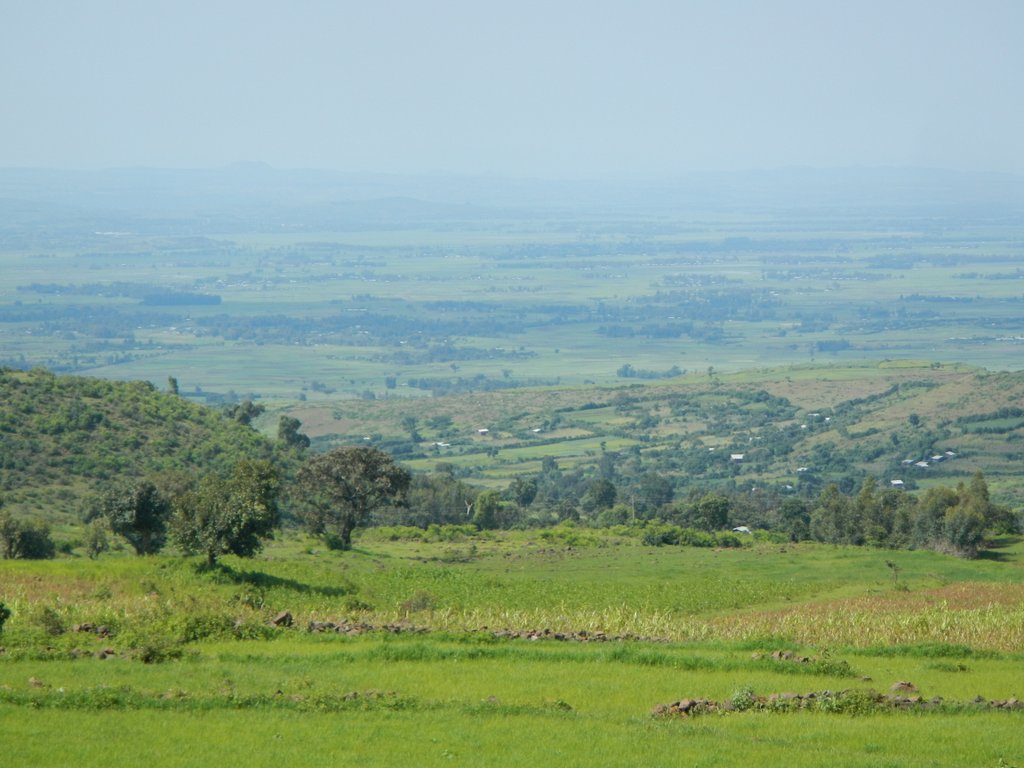 open country , yet no space .

The ride was by no means boring . What is amazing about Ethiopia is not just the natural beauty , but the ability to observe  life as you ride  . Beautiful , powerful waterfalls used as washing machines for both people and clothing , river beds , like parking lots with a  truck , car or motorcycle reversed into the water and a natural car wash created , Armco barriers not only offer protection but the ideal place to dry your laundry . So rural Ethiopia lives. The road , the life line up and down the countryside , a way too and from  market , the surface a reprieve from the mud and life takes up almost an entire lane . The women wearing clothing , plain and worn , yet  beautiful hand crafted crucifixes  adorn their necks in shiny silver , showing their beauty with such simplicity . Some slowed by the large urn tied to their backs full of fresh water  , the walk home slow and hard . Some of the village  buildings using the daily news in their windows  to offer some privacy from the passing trade , so is this world , rich and fertile , the land  deep and dark , lush and green seems only to  offer subsistence nothing more .

I arrived in Bahir Dar early afternoon , found a hotel on the lake and decided to take the transmission cover off the scooter , just to double check after the mud crossing , it had been worrying me the whole ride up . On inspection all seemed in order , so after a wonderful hour or so working and chatting to the locals I put everything back and felt a sense of relief that Vic was ok.

One of the guys in the crowd asked if I was from Johannesburg in South Africa  , I said that I was , why was he asking ? He then asked if I was special military , I said no , why do you ask ? He then proceeded to tell me that his brother or a friend of his brother had been shot two weeks ago by a gangster in Johannesburg  and he thought that I must have special military skills and training to firstly survive living in Johannesburg and secondly to travel across Africa solo on a scooter. I then tried to explain that Johannesburg or crossing Africa for that matter was not as dangerous as he thought , convinced he was not .

After my shower I was not feeling to well , a slight fever , and nausea so off to bed early , I woke feeling very off colour so I decided to stay an extra day just to sleep , as I slept the storm raged outside the water came down in sheets and I was very grateful  to my guardian angel for my day in bed . I slept most of the day and through the night to wake refreshed and feeling much better , breakfast and our sights on Gonder. 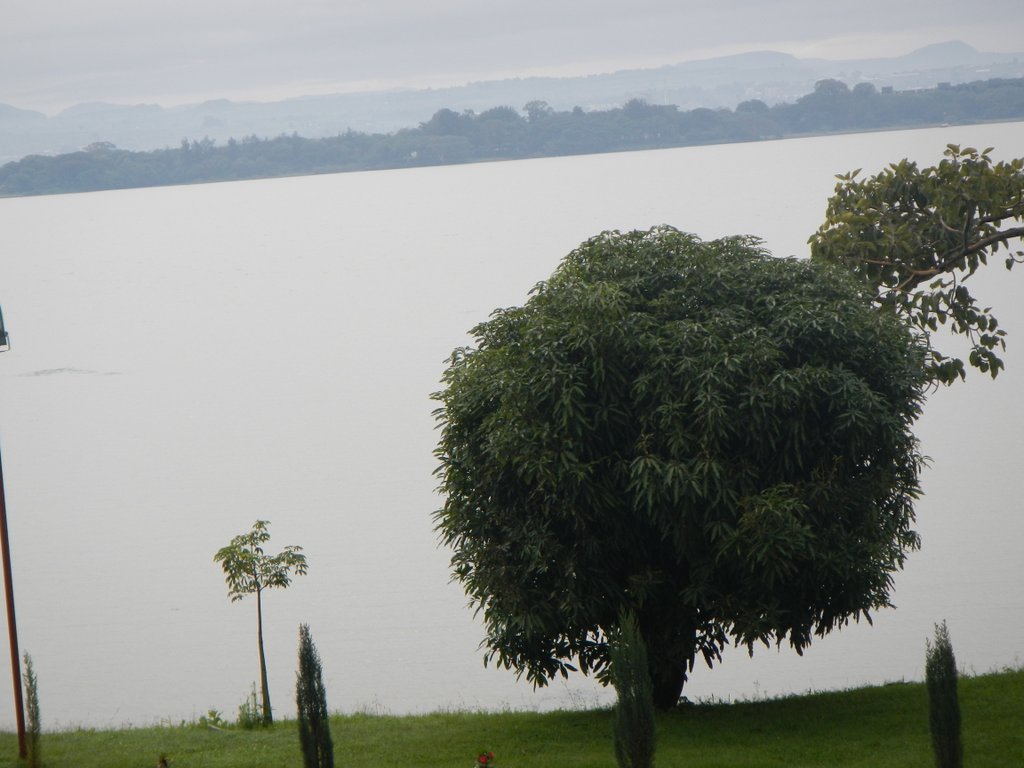 Up and out to Gonder , a nice short 200 kilometre ride up into the mountains and closer to the border crossing . I arrived around lunch time booked into Faisel lodge changed and off I went to explore  town and the royal enclosure . 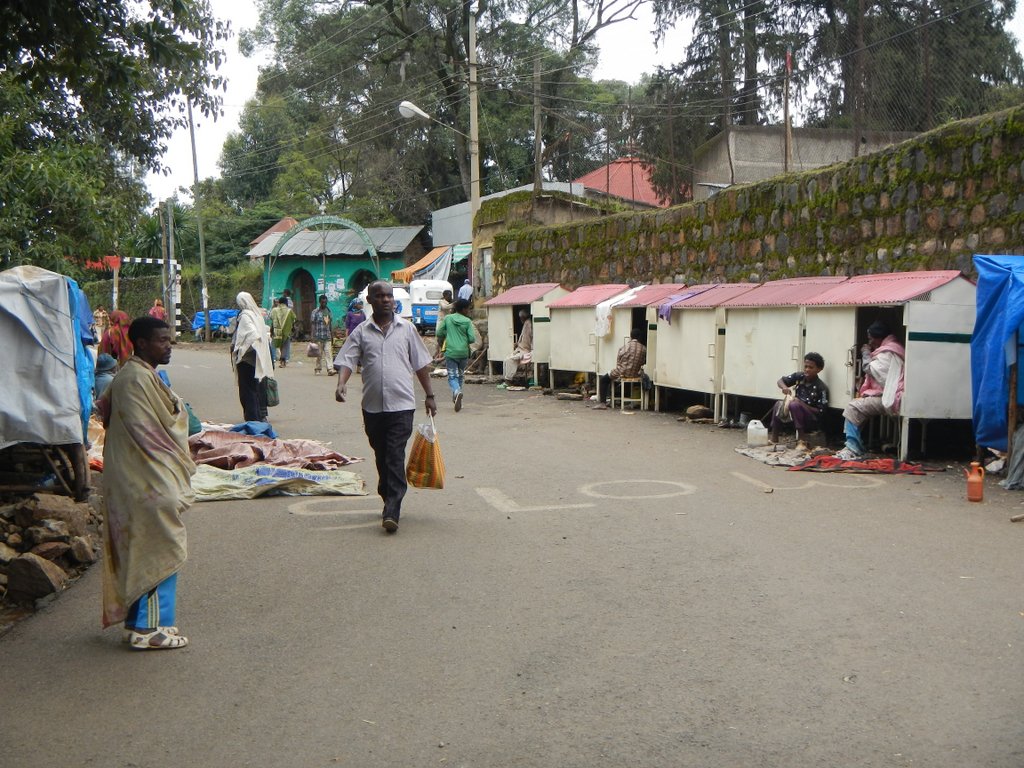 Peoples small homes on the street . One room lock up and go.

I hired a guide and spent an incredible hour and a half being enlightened and educated on the royals and the enclosure now a unesco heritage site. 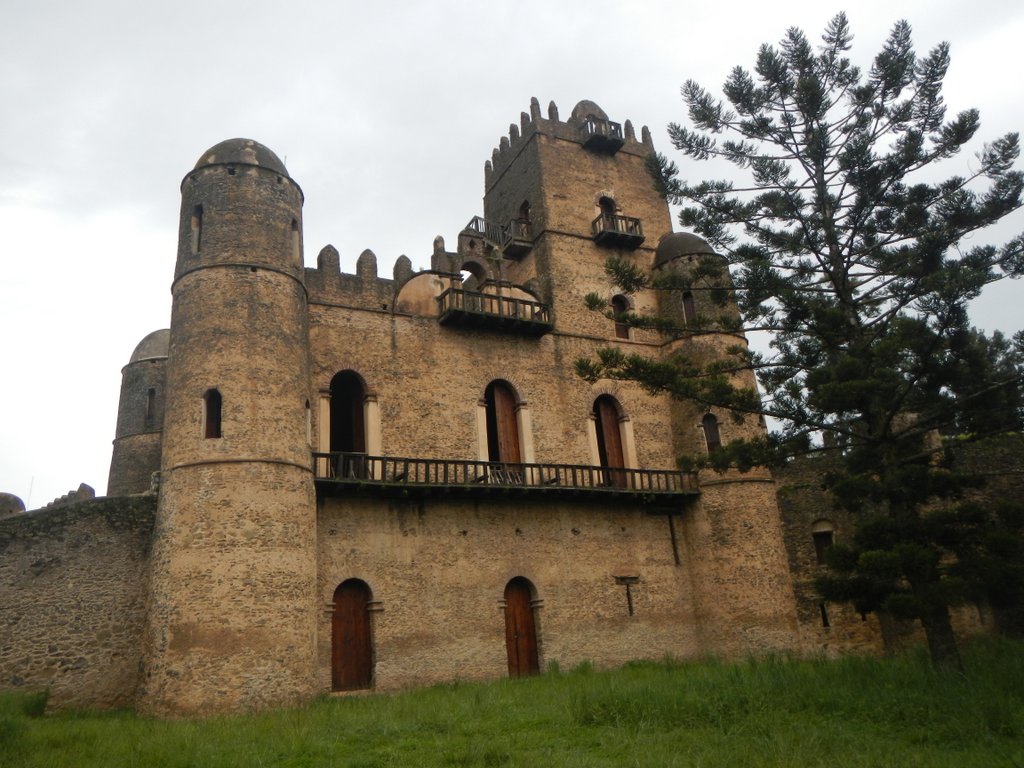 A few pictures of the different structures and buildings in the enclosure , all of which sustained severe damage during the war when England intervened to sort the Italians out , such severe destruction . 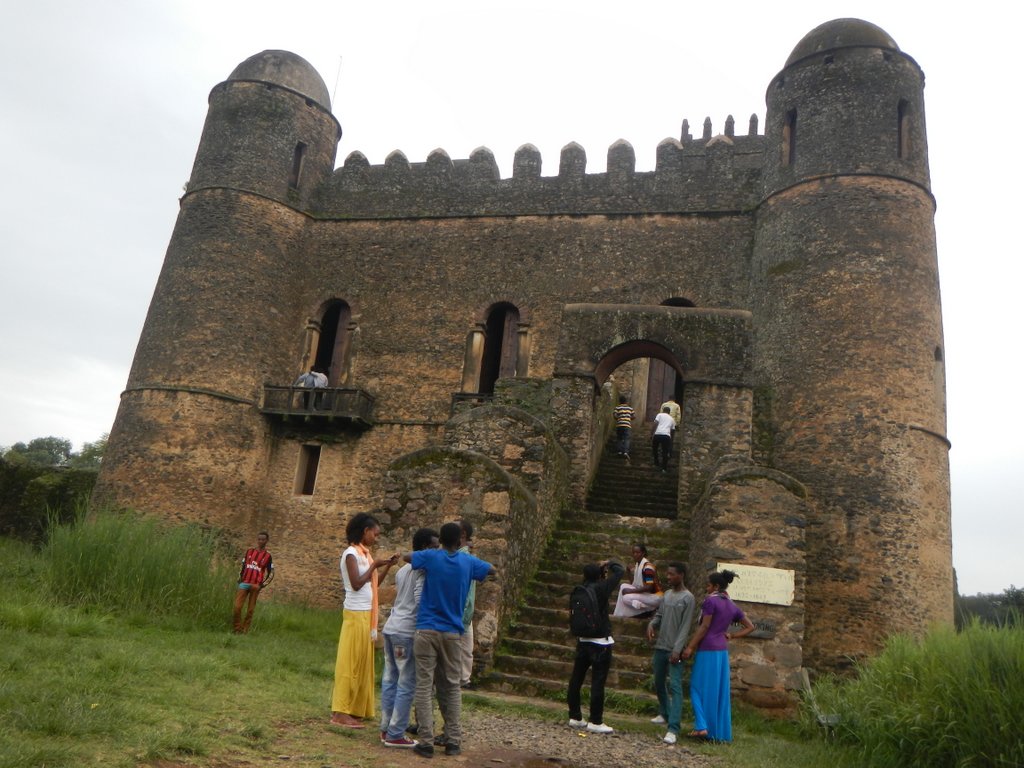 Many Ethiopians spend time in the garden relaxing and posing for pics. 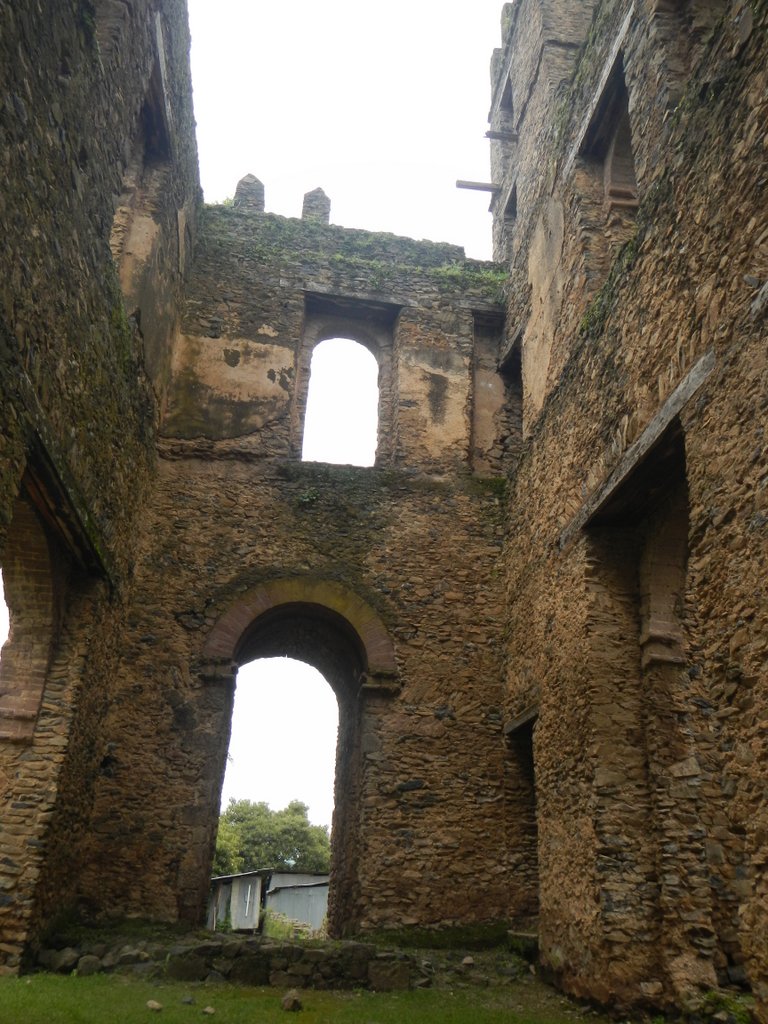 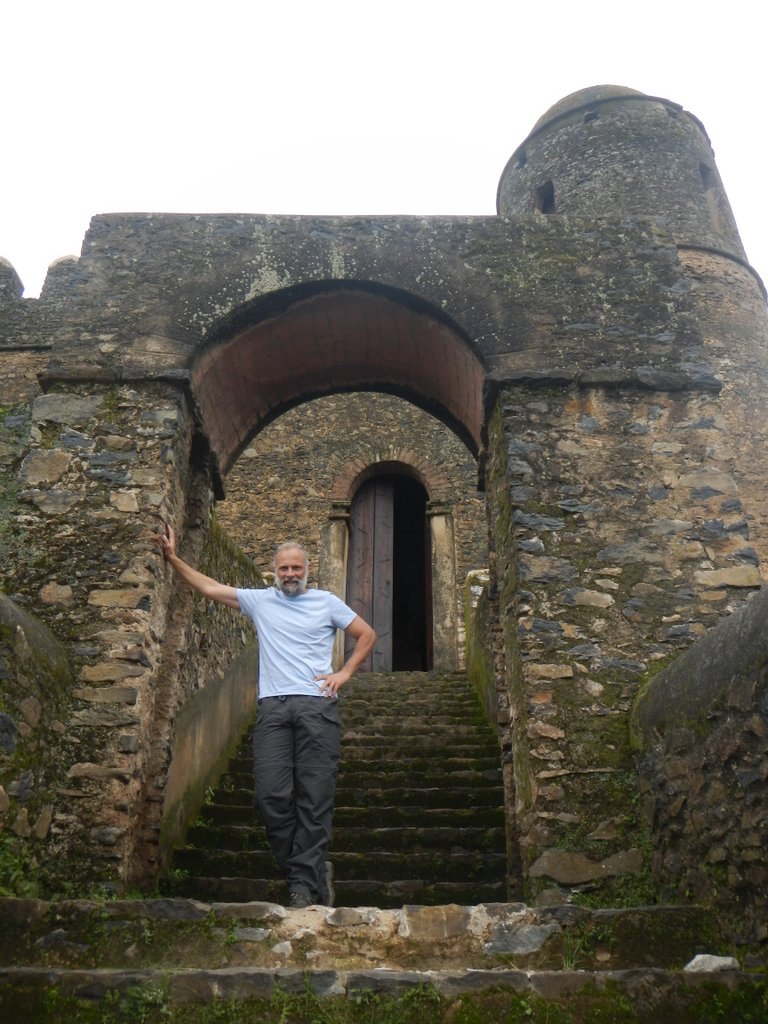 Not just the locals pose . 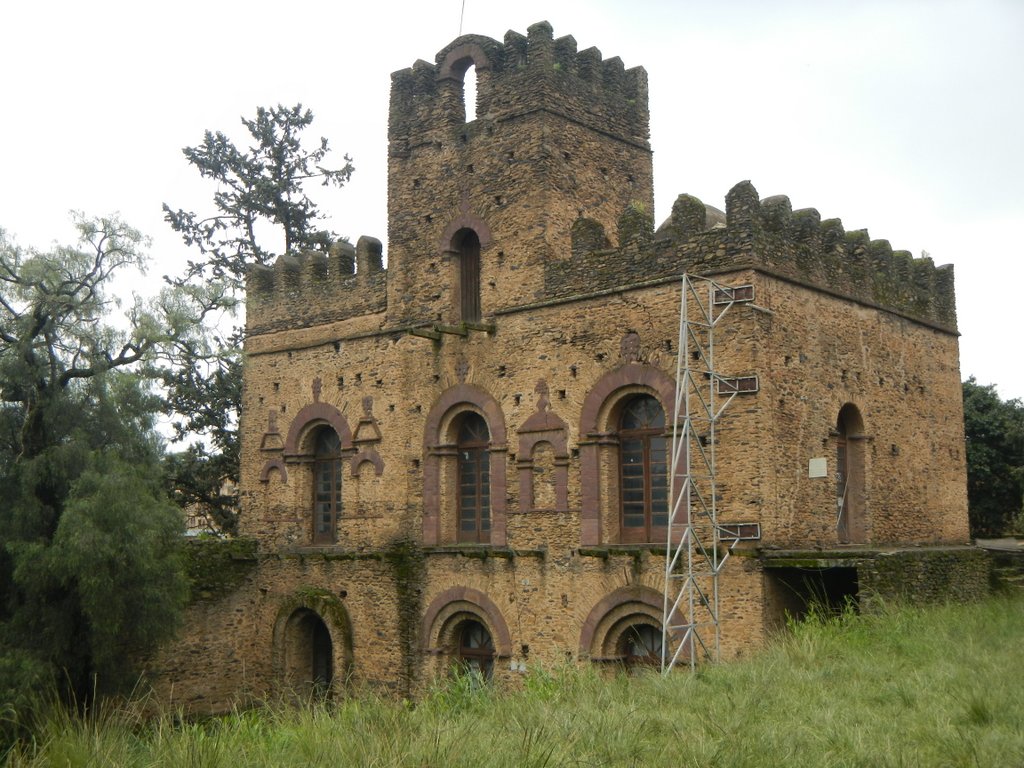 After my time amongst the royal ruins , I sat down for some coffee and Ethiopian people watching , then off to town to try and find an internet connection , rare like a T Rex in your garden , reliable internet is in Ethiopia , this was actually the only really frustrating thing  about Ethiopia  the inconsistency of their network , Oh and before I forget the difficulty in obtaining fuel for Victoria on a regular basis , so I often had to use my reserve supply . 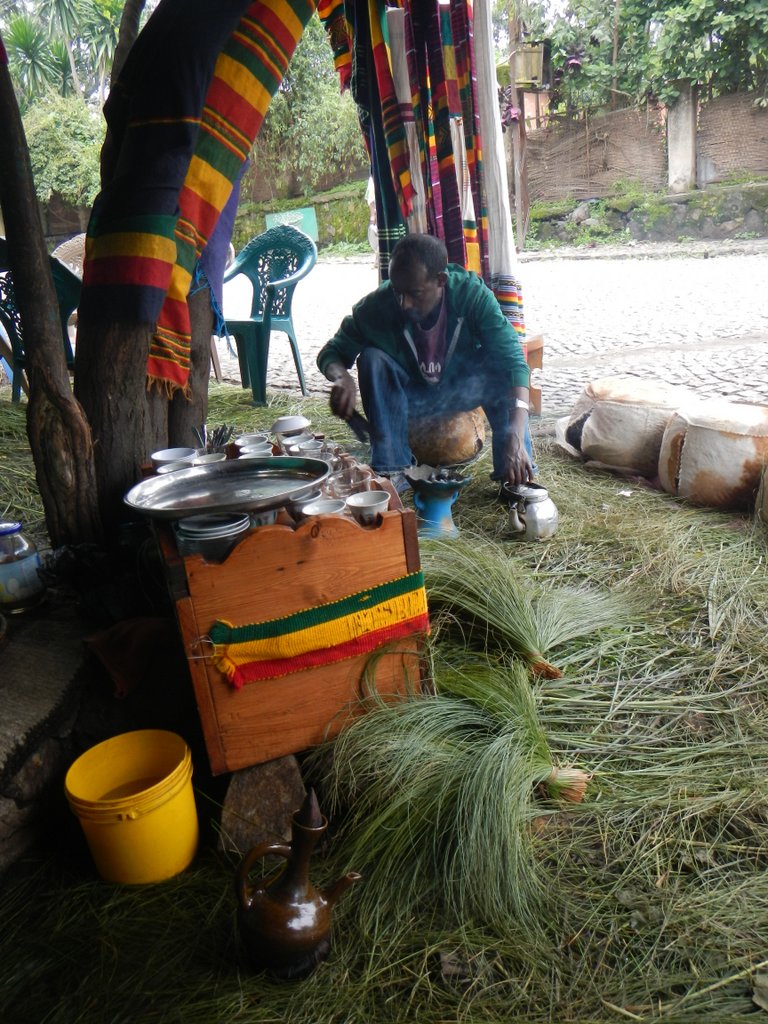 My coffee master preparing his potion .

The sun began to set ,  I made my way back to  the lodge prepared Victoria and myself for the border crossing , had dinner ordered a glass of Ethiopian red to close the loop and off to bed , for tomorrow would be a 400 kilometre ride with a border crossing so I needed my wits and my rest .