The 200 kilometres to Harar took just over 4 hours to navigate  the  roads ,  highland winds twists and turns . We arrived in this ancient walled city where I was going to experience a way of life frozen in time , blended with the new world of construction , tech and commerce , where within one city different  religions and cultures  walk free and proud all wrapped in the fabric of what it means to be  a citizen of Harar . 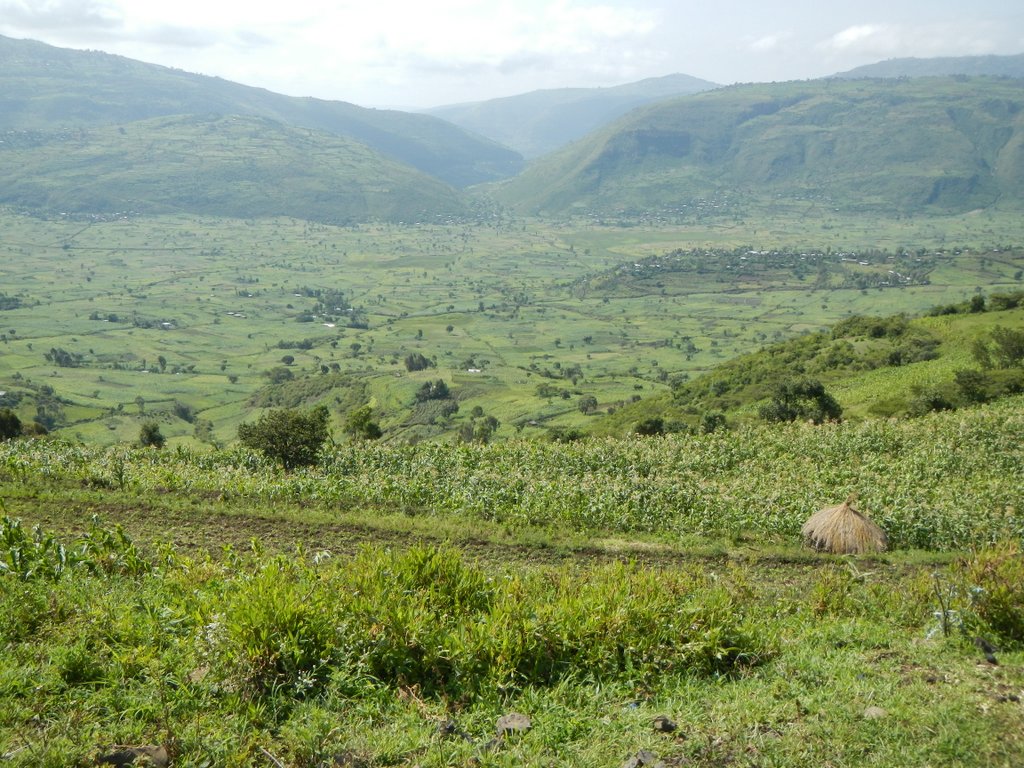 The road to Harar . 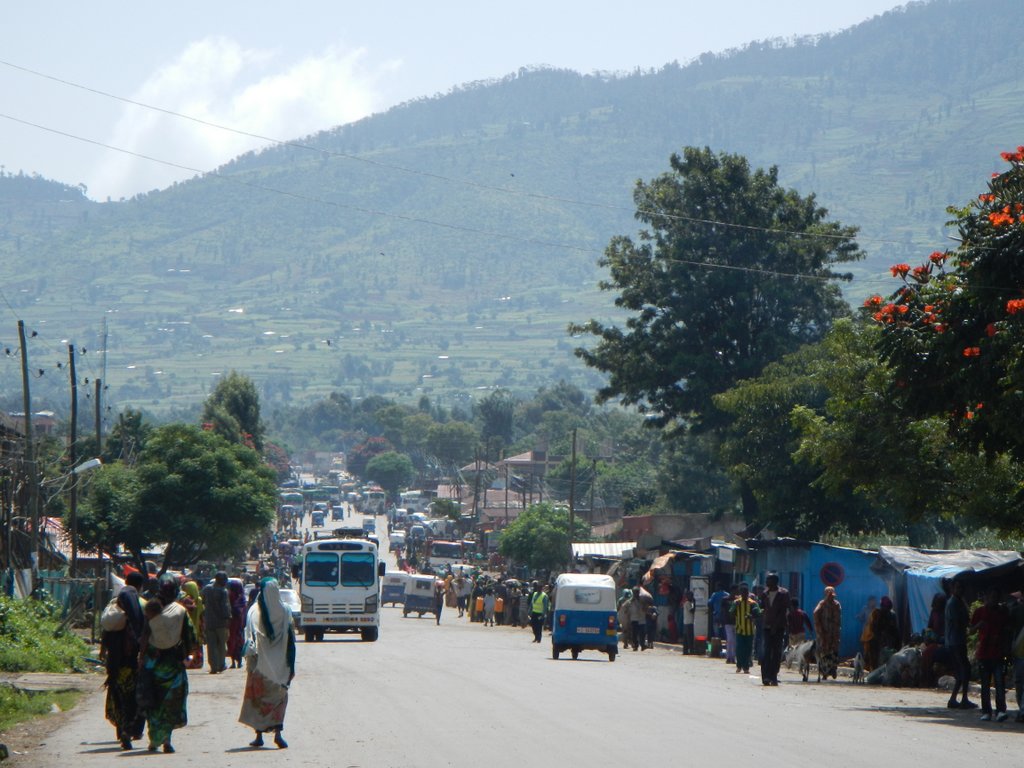 I met up with Dr Lemessa who kindly introduced me to the hotel staff and who asked the hotel to find me a guide to enrich my time in the city and to show me a little of their world , so by 16h00 I was with Tedy Zion  my appointed guide touring the city both old and new . 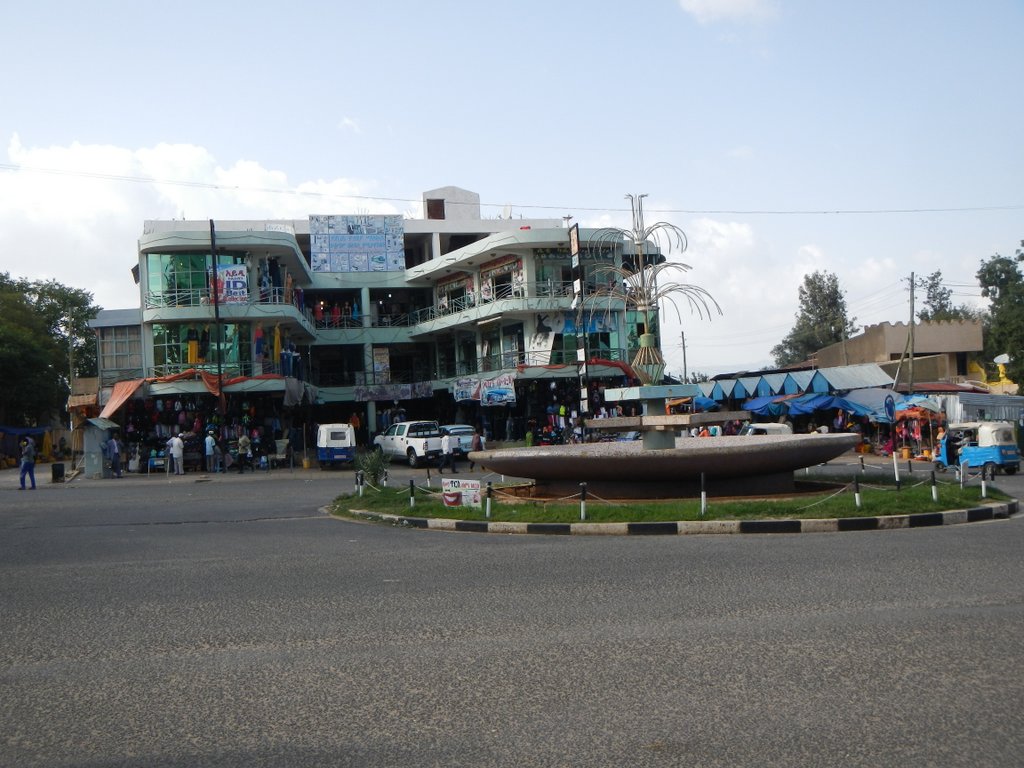 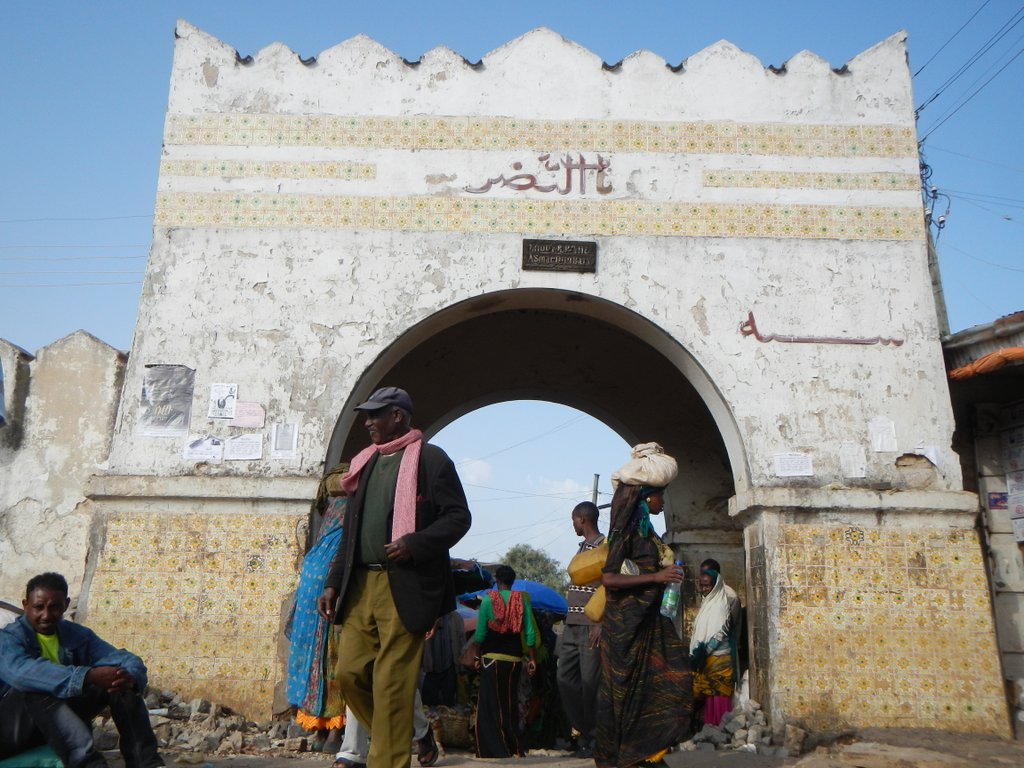 The old and my first gate

Once you enter the old city  through one of its five gates , you are transported back in time , you expect to look down , see your feet in sandals , your clothing transformed to rough spun cotton or your body  caressed by fine silk  , your coin bold and brass , the  weapon at your side  forged by hammer and  flame , adorned with a  jewel  encrusted handle , so  your life is thrown back hundreds of years to a lively rich  place . Trading , living and eating on the street , your world protected  by an ancient wall . Your life free  , your senses full of scent and spice , your eyes adjusting to the frenzied  activity , your step more cautious  to the cobbles and narrow  alleys , your space and movement robbed by congestion  , you come alive , with your mind imagining you here in this old place living in the time of  kings , prophets and warlords . So I took my first breath of old . 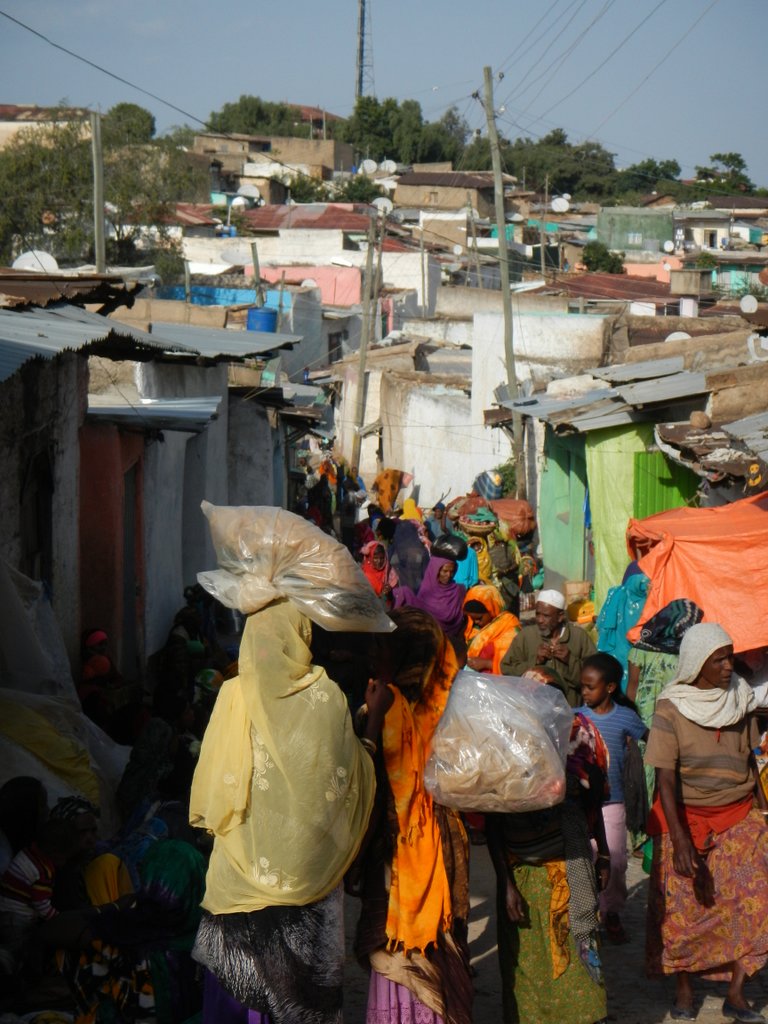 First breath of this ancient place.

My excitement feverish I tried to take it all in , my eyes unable to settle or focus , always being shown something new , bigger or  brighter , a scent takes them from trade to seek its source  , a bump , a touch , a face , eyes meeting and moving , I was less than 100 meters in , so let me take you visually through these streets before we meet for coffee down an alley in a home ancient in construction as condition where I will tell you more . 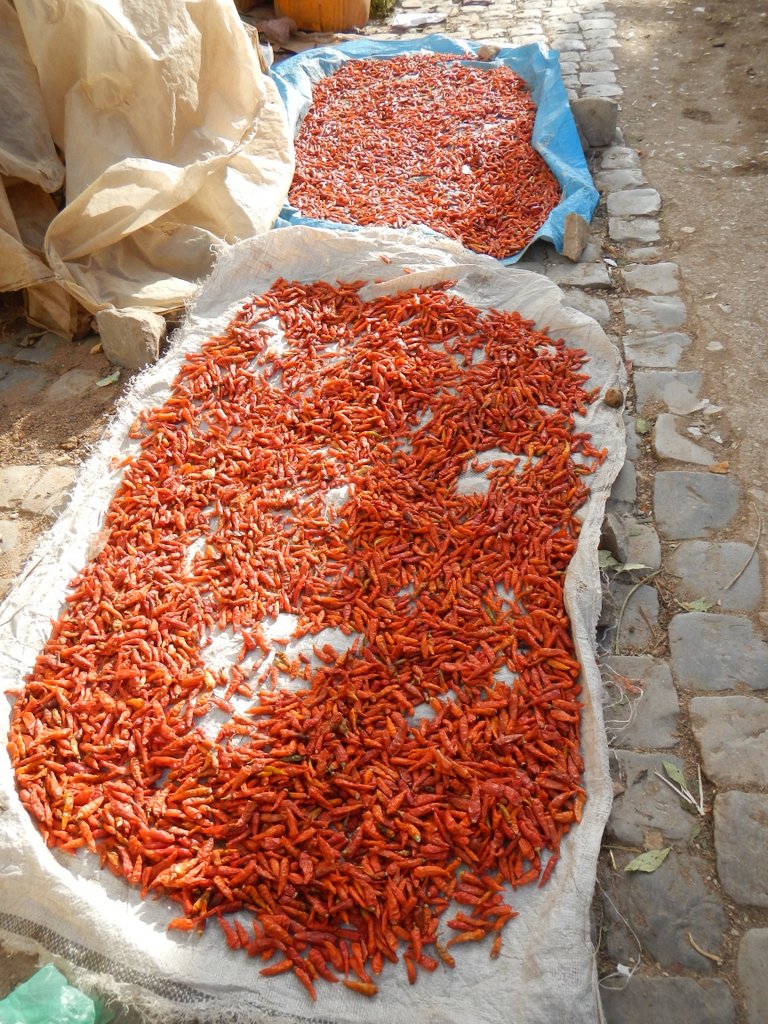 The colour of heat . 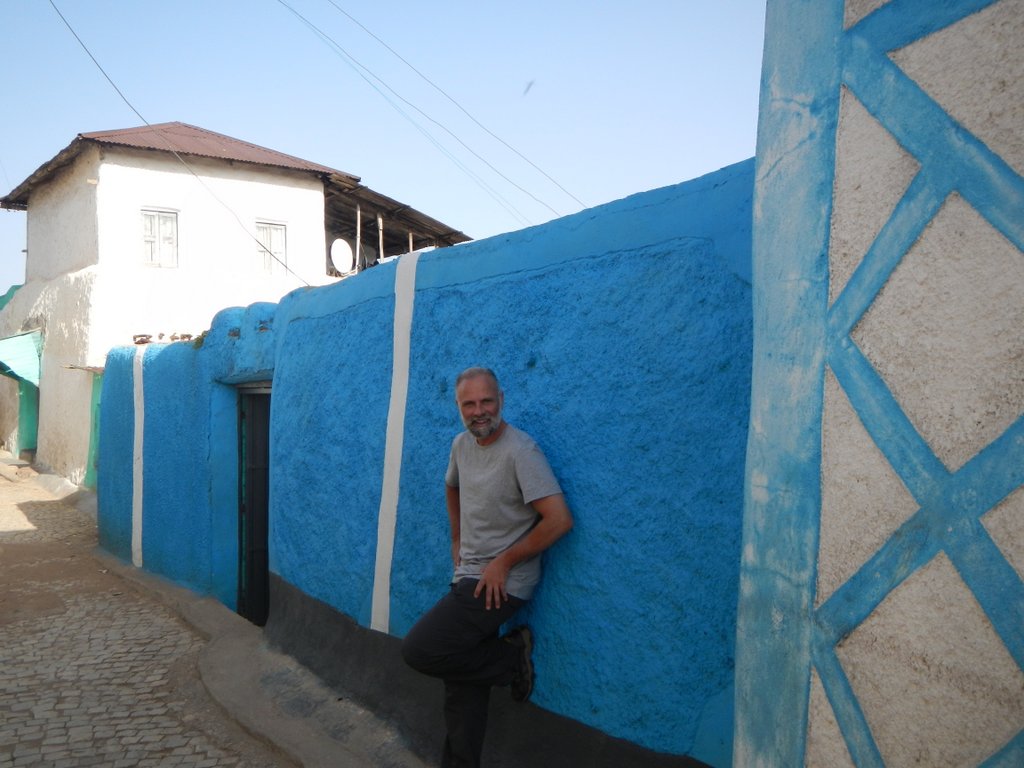 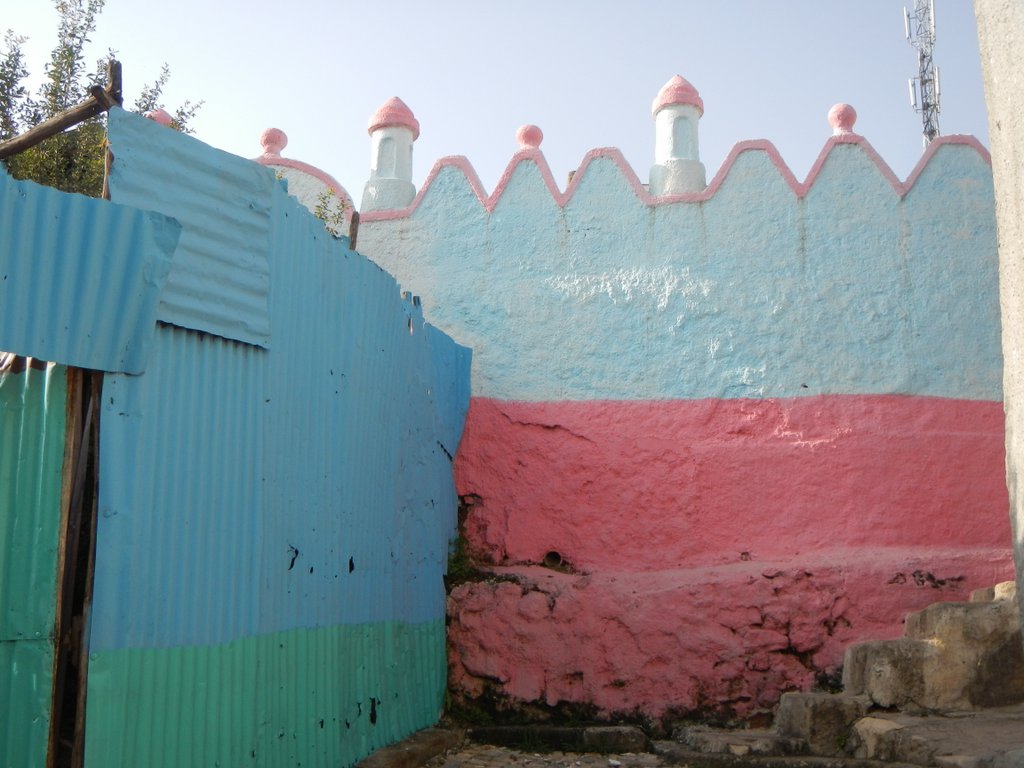 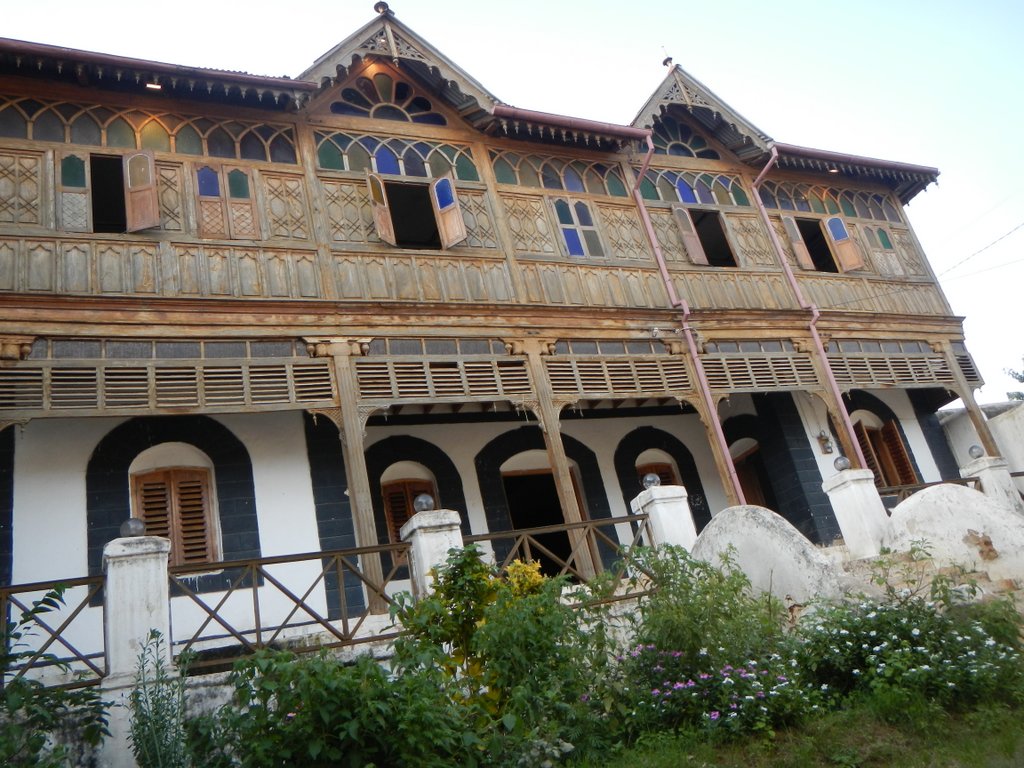 One of the magnificent restorations in the old city . Rimbaud House. 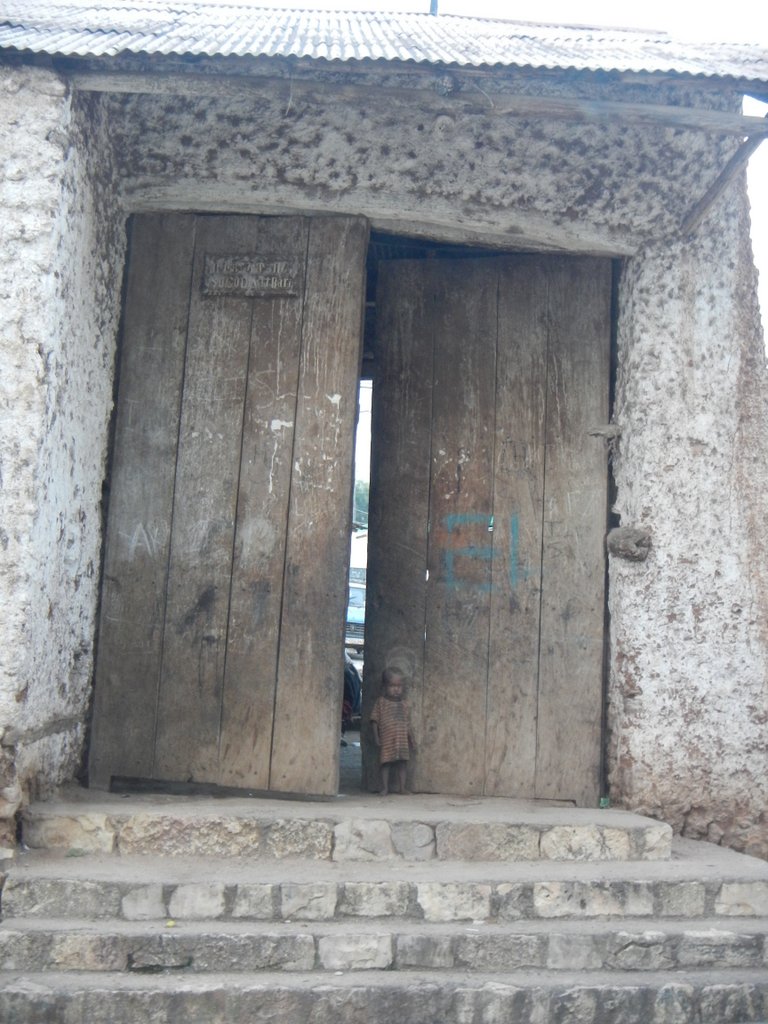 Second of the five gates as we walked the streets. 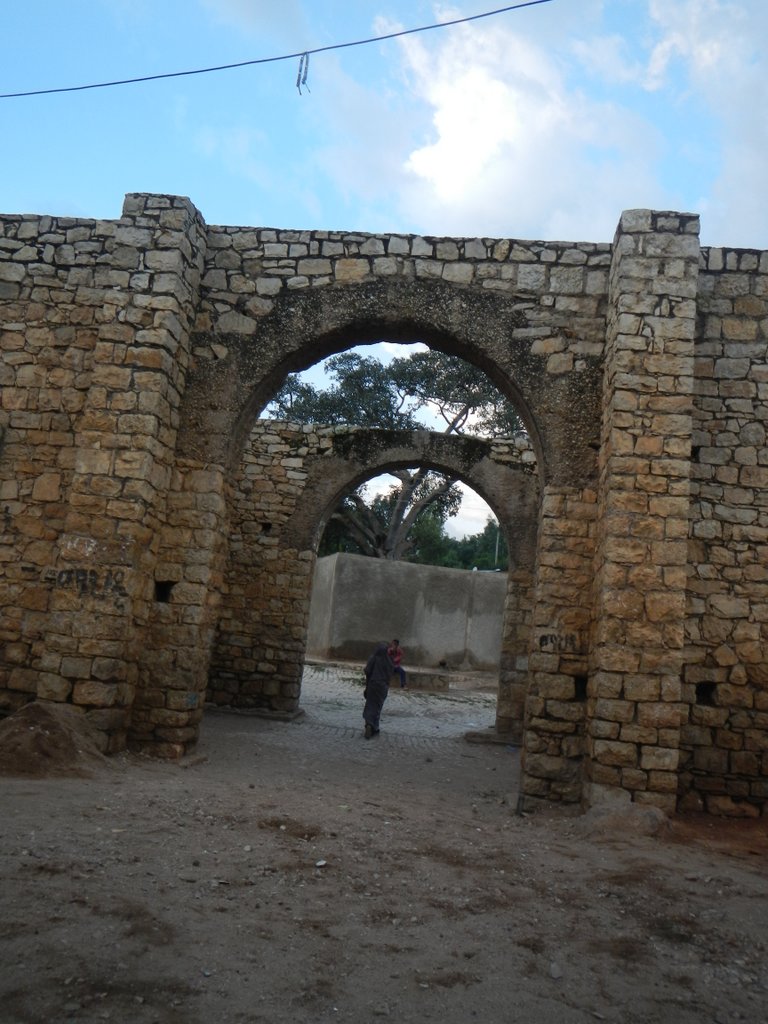 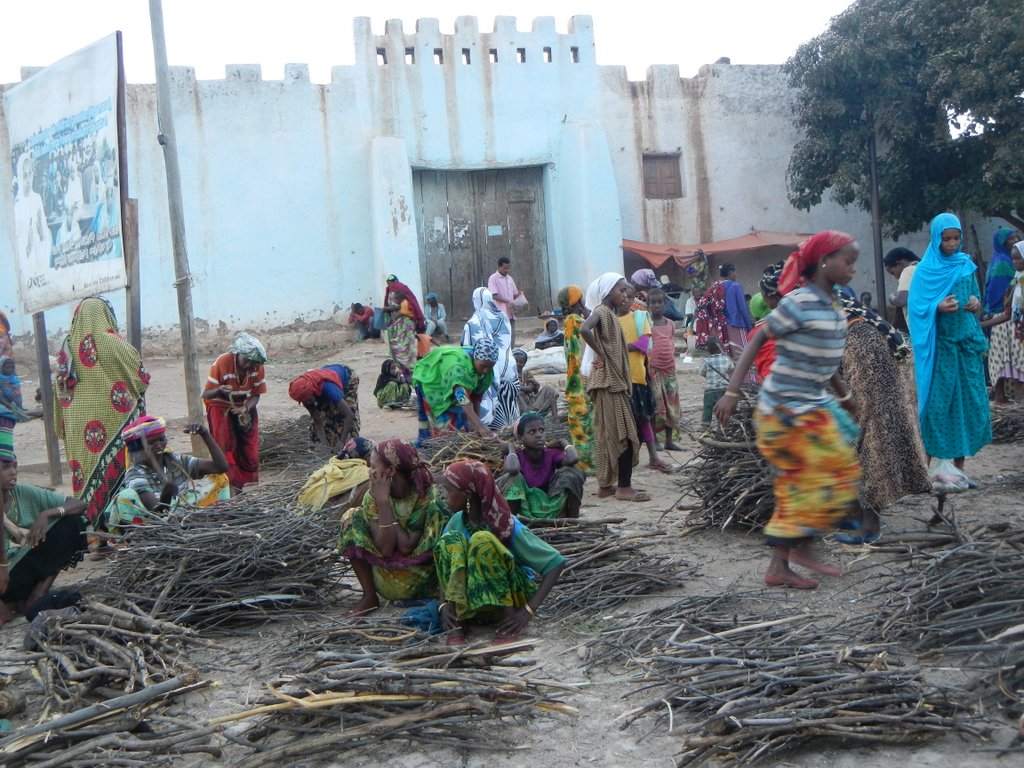 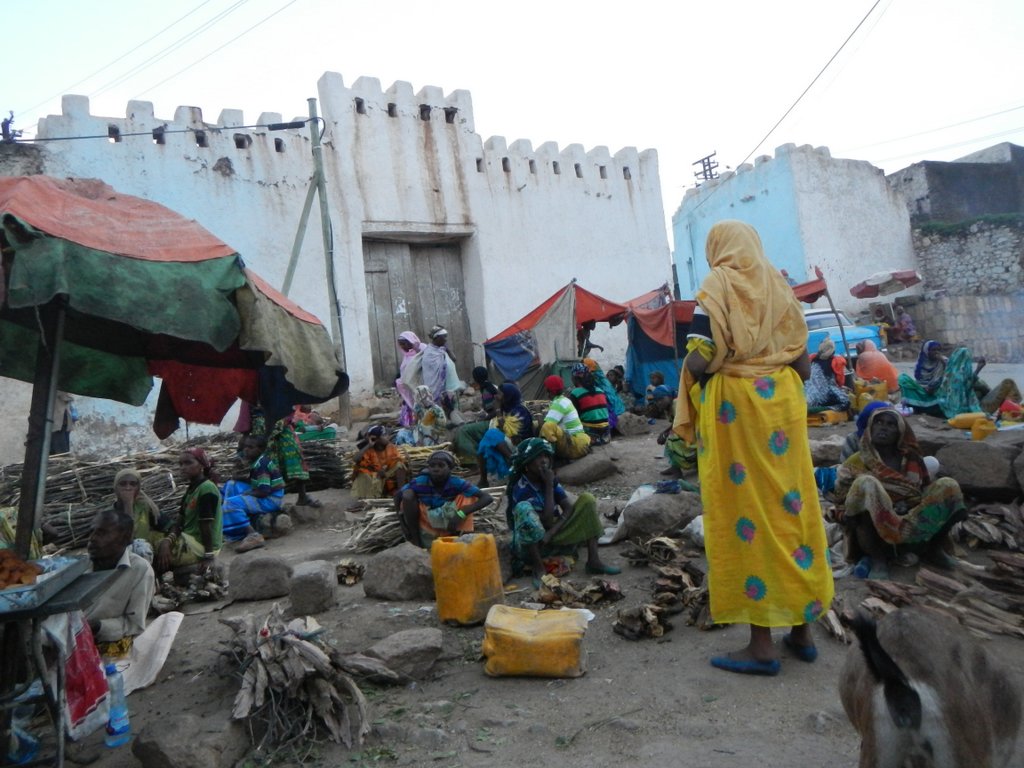 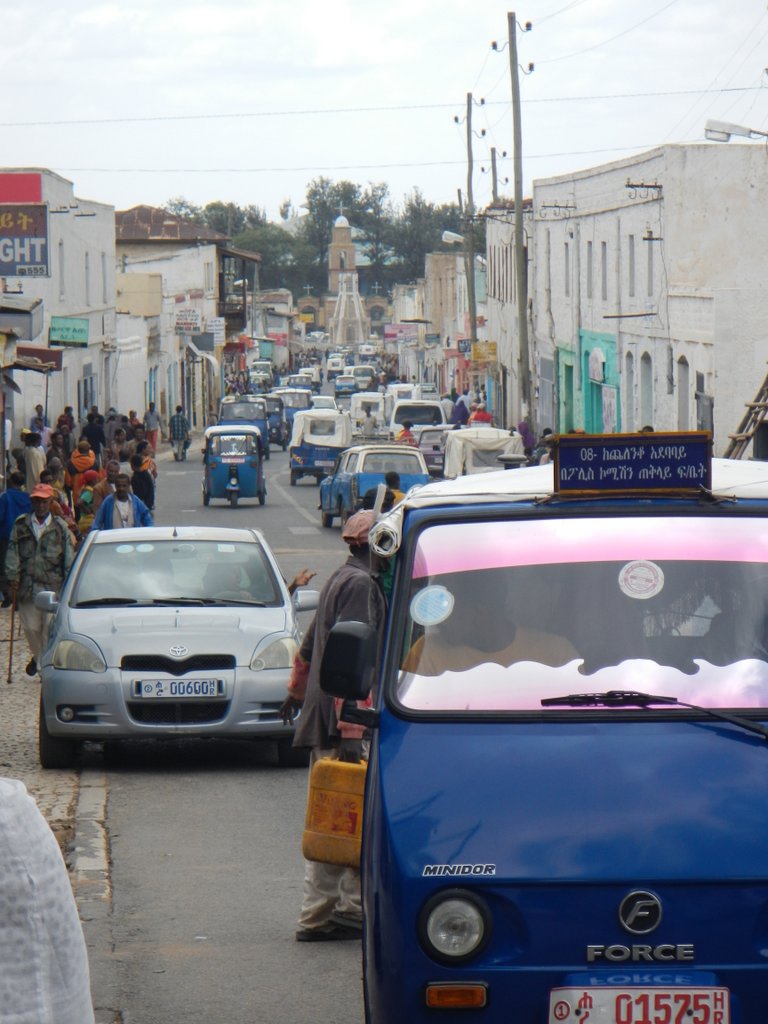 The main road tat leads you in and out of the walled city.

So I emerged in a home for the age old tradition , the coffee ceremony , to take an hour of my time yet give me insight into a tradition that holds the old ways fiercely in a miniature cup of deep and black liquid extracted by art and ritual from the  bean  we all know as coffee . So it began with preparing the charcoal that would provide the flame and heat . Next the beans washed and placed over the heat to roast , the heat the first turn of the key to unlock the aroma hidden within . 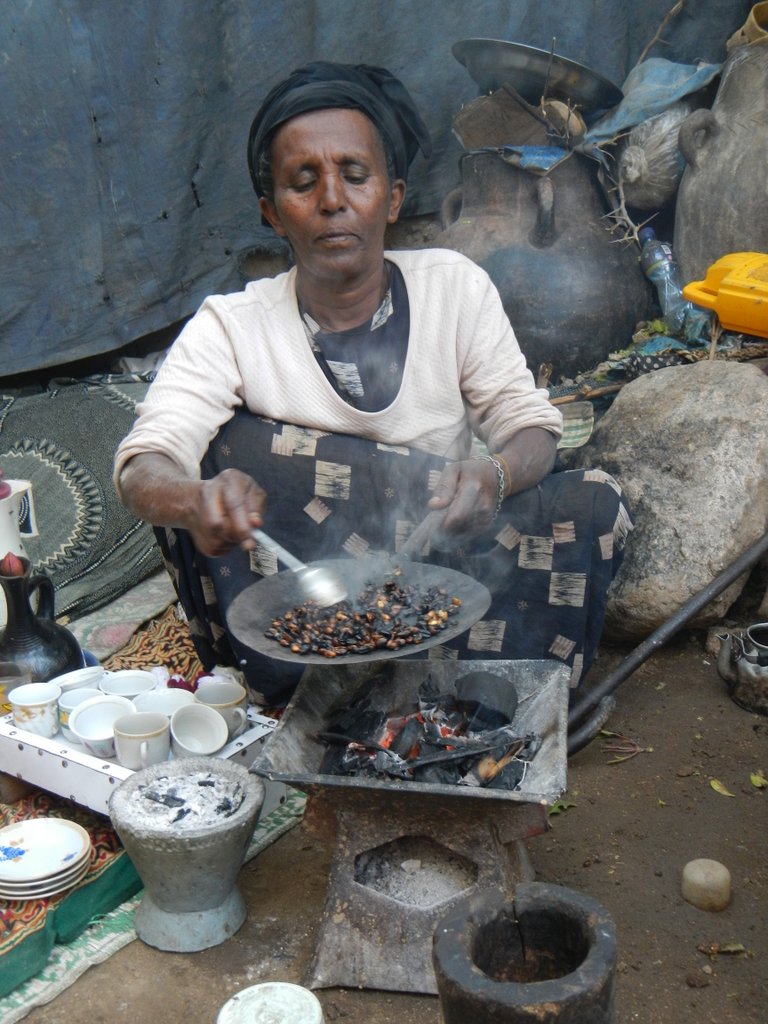 Preparing the bean for pounding . 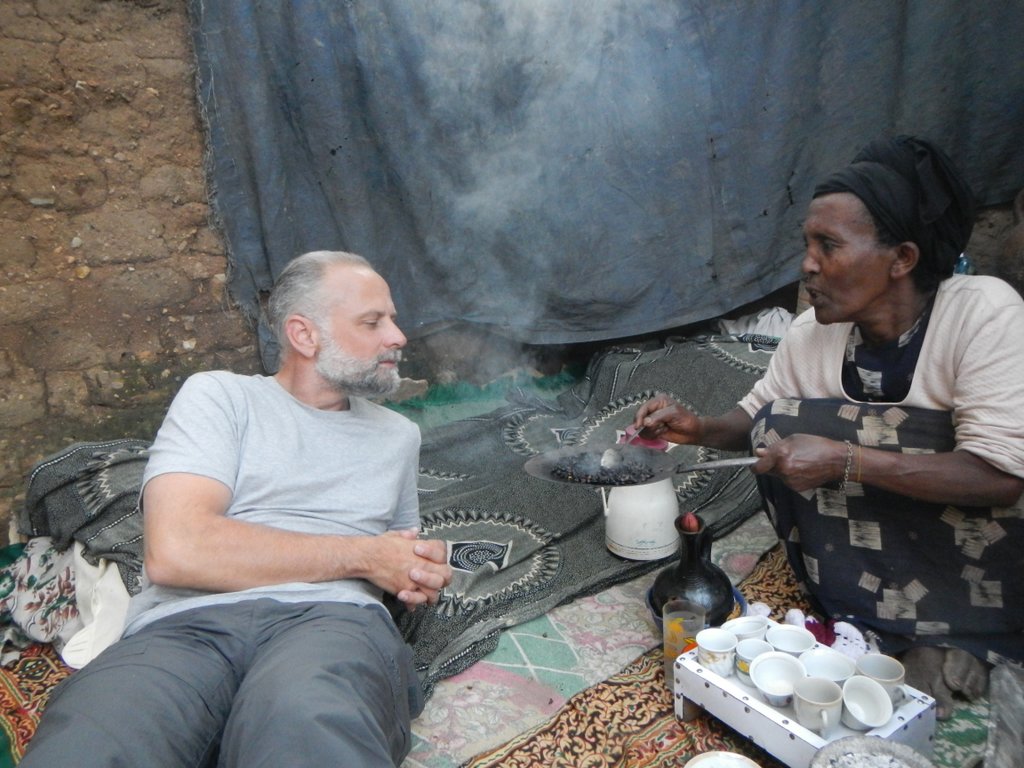 Then the pounding and crushing of the roasted beans , followed by placing the freshly ground powder into the pot , placed on the coals to heat , before the first of three are poured , to gift you with , peace , then love then the third for peace and love . Do you think John Lennon and Yoko Ono drank too many cups of Ethiopian coffee ? I wonder . 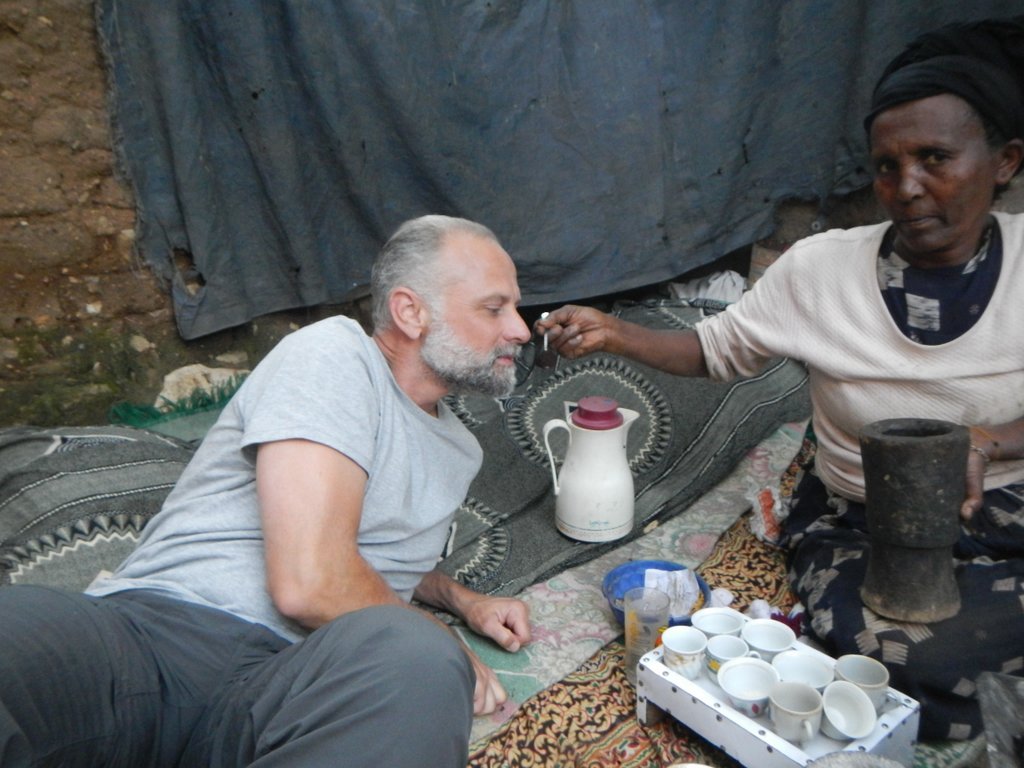 Finally my first cup is handed over with a humble pride and a knowing  smile that tells me before my first sip , that this is going to be a life altering event  in my coffee life . First the aroma fills the deepest of recesses , trying to prepare you for what you are about to receive . The liquid gold touches my taste buds they can’ t understand what is happening , spontaneously I feel them doing the Mexican wave in my mouth , I hold the temptation to swallow , I savour the flavours , close my eyes so I have an extra sense on hand , let the liquid rest on my tonuge , I gently swallow to complete the ceremony , yes truly the best I have ever had .

While at the coffee ceremony , I was educated about the  Chat universe , not a physical enlightenment  but a verbal account of its tradition in Harari culture , the addictive nature of the plant as well as the mind altering properties it holds within its leaf , to be extracted by chewing on the leaves . Hallucinations , alertness and various other advatages Tedy tells me . You are able to remember what you have forgotten , not only that but it helps you think twice , helps you think twice I repeat , yes he tells me , no further explanation offered . So now with my education well underway  Tedy  explains the different grades , experiences to be had and how Harar chat is the best in the world . Should he get some for us to enjoy after coffee he asks ?  Having noticed the effects of chat on the Harari people I had to decline , but damn that coffee will live with me forever .

So next up to the view point to enjoy Harar at sunset before we head for the hyena’s and the men that feed them . 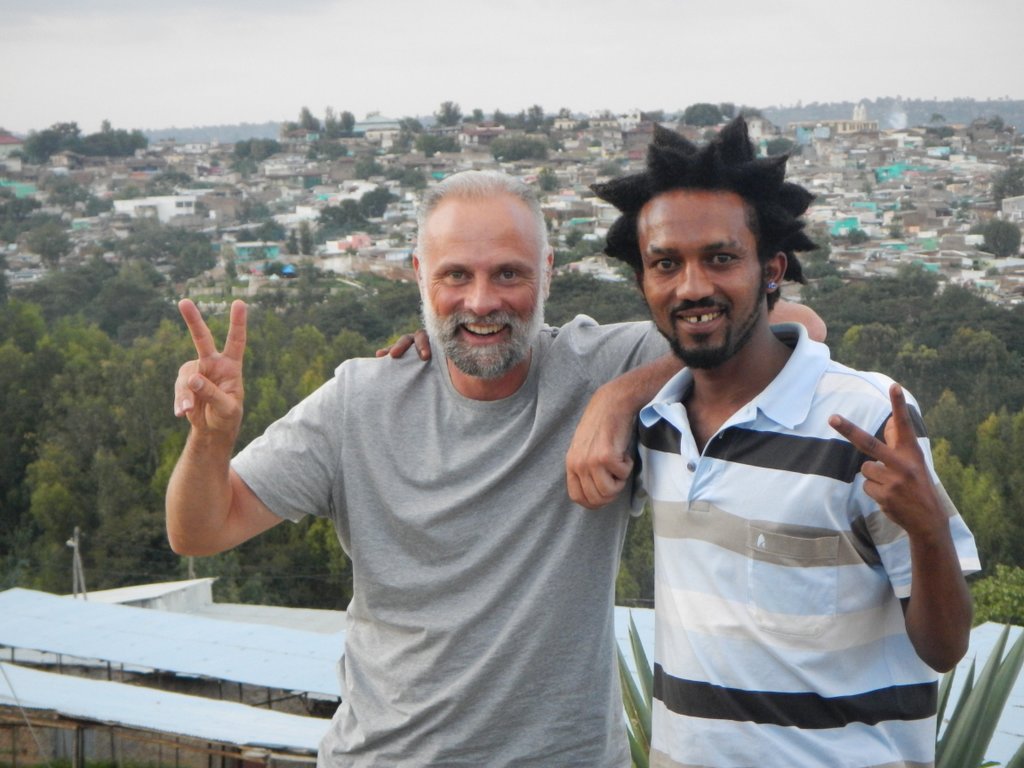 So the sun down we made our way out of the old city to the outskirts where the hyena men are . It starts with him calling them by name , apparently , I am told around 30 or 40 live around Harar  , and are basically fed in one of two locations . When I arrived about 10 hung around waiting for their commands . These predators , very obedient I thought ,  maybe to much so . I went down on my knees to await the beast to mount my shoulders and feed , so gently I felt her paws wrap around my shoulders while her weight pushed them down slightly , she turned her  jaws to devour the meat dangling above my head , so gentle she was , the command given , she left . I traded cash for experience and left back for the hotel , overflowing  with the intoxication  bottled in Harar.  I had met a couple from the UK earlier , John and Charlie , so we shared our travels over that superb wine the Rift valley produces and off to bed . 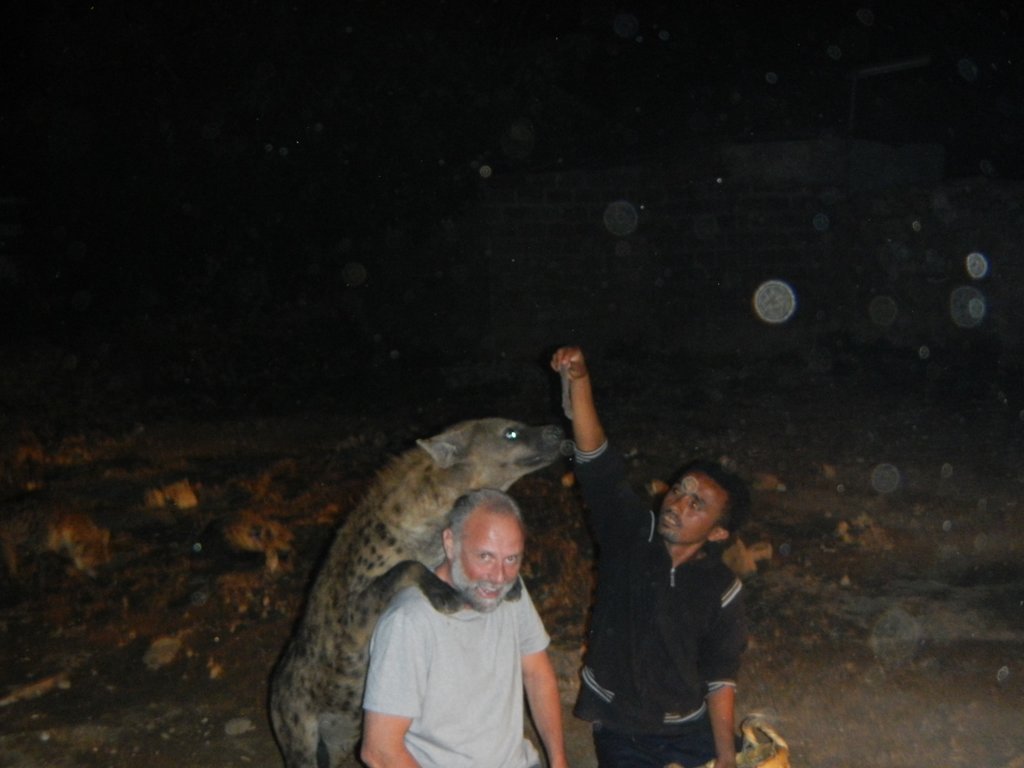 The next day , Tedy arrived to take me around further Harar highlights and delights , back to the old city to look at a few museum’s , shops and the tomb of the last King of Harar . Tedy not as attentive as the day before , I was coming to realise that Tedy  like a lot of Harar really enjoyed his chat , so the second day out was like been guided by the Duracell bunny , and chat did not help Tedy remember twice , actually not even once , yet I still really enjoyed my time hanging with Tedy Zion not from an educational perspective but the ability to enjoy a city with a citizen . 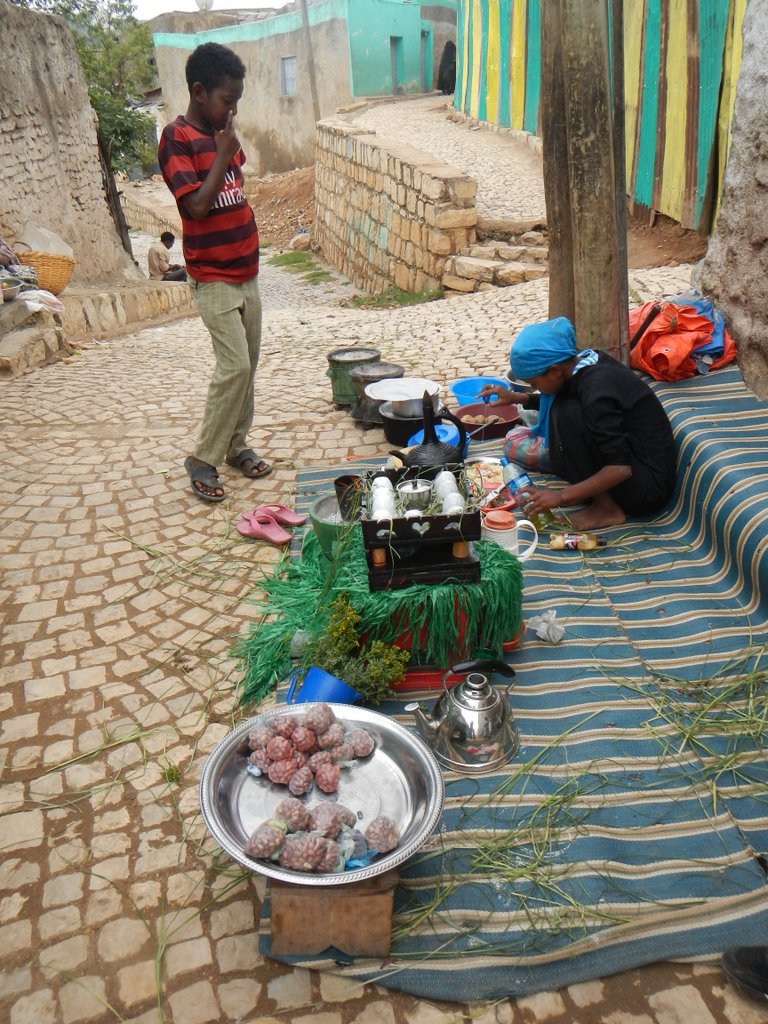 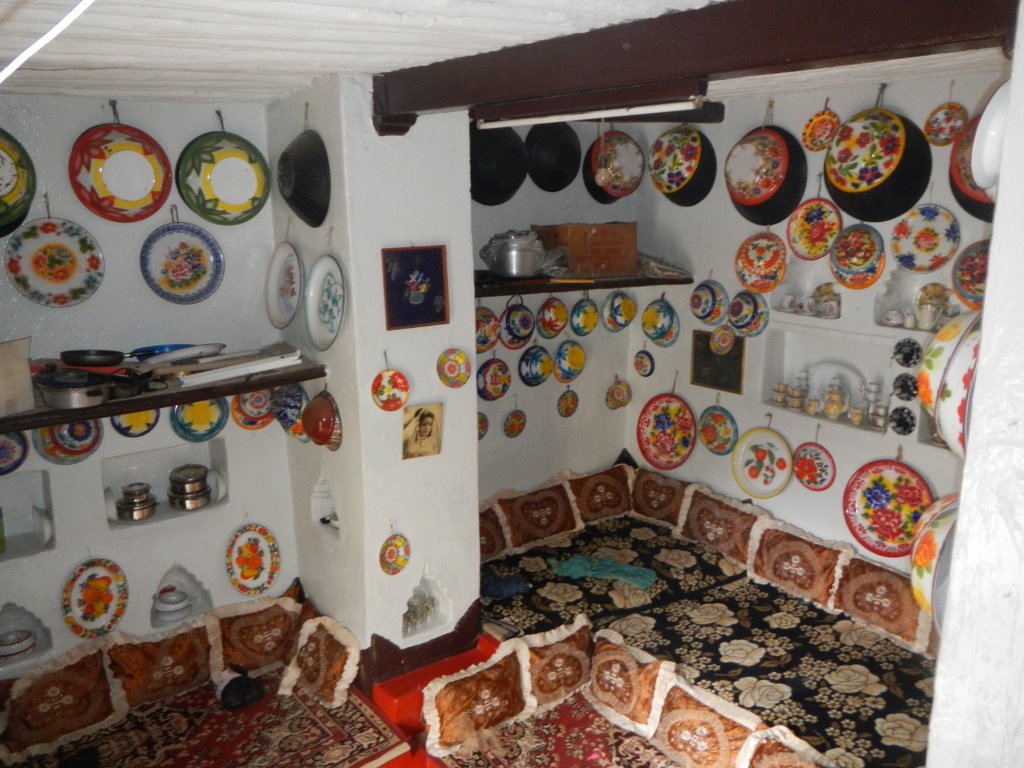 Interior of an Harari home. 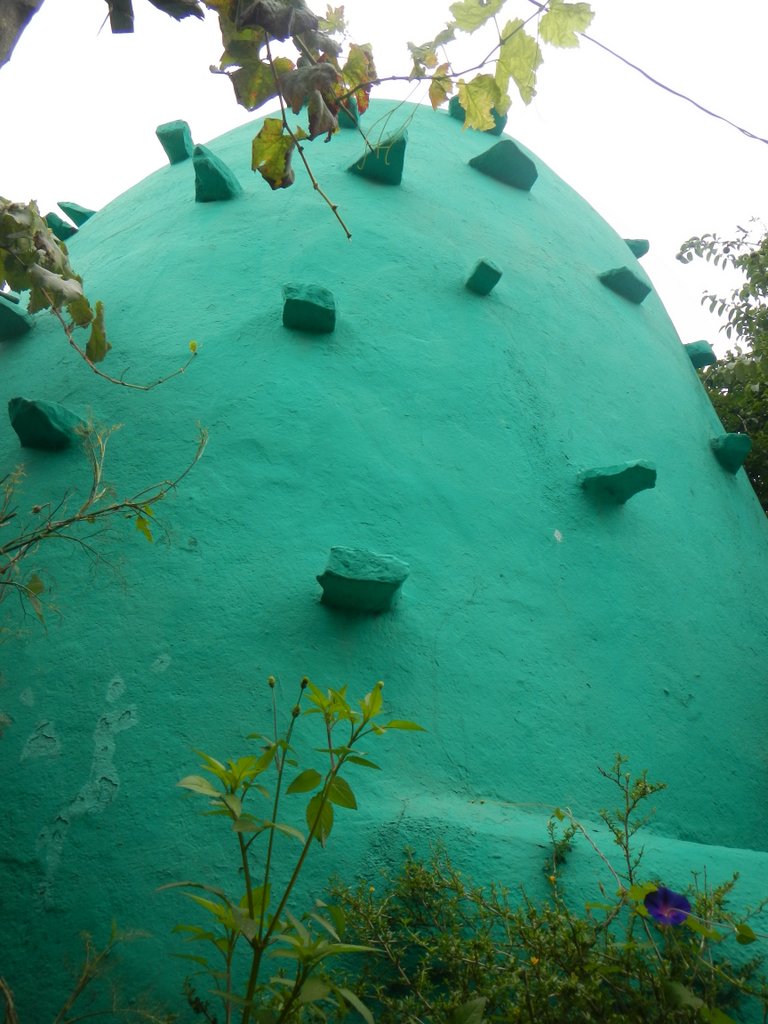 Resting place of the last King of Harar.

So my day and time in Harar was coming to an end , we started our exit from the city when a young woman called out, for  us to come back , she invited me in, to see her home , offered me some chat and coffee and so I sat down to enjoy the company have a chat without the chat . The conversation polite and enquiring , then was I married came up , after my answer so came the proposal to get married , I politely declined to laughter and banter all around , the last proposal was just to provide a child , as she told me , she has two breasts one for her existing child the other for the one I should provide  her , so amongst the chatter and  laughter I said my goodbyes with a heart full of joy for what Harar had shown me . 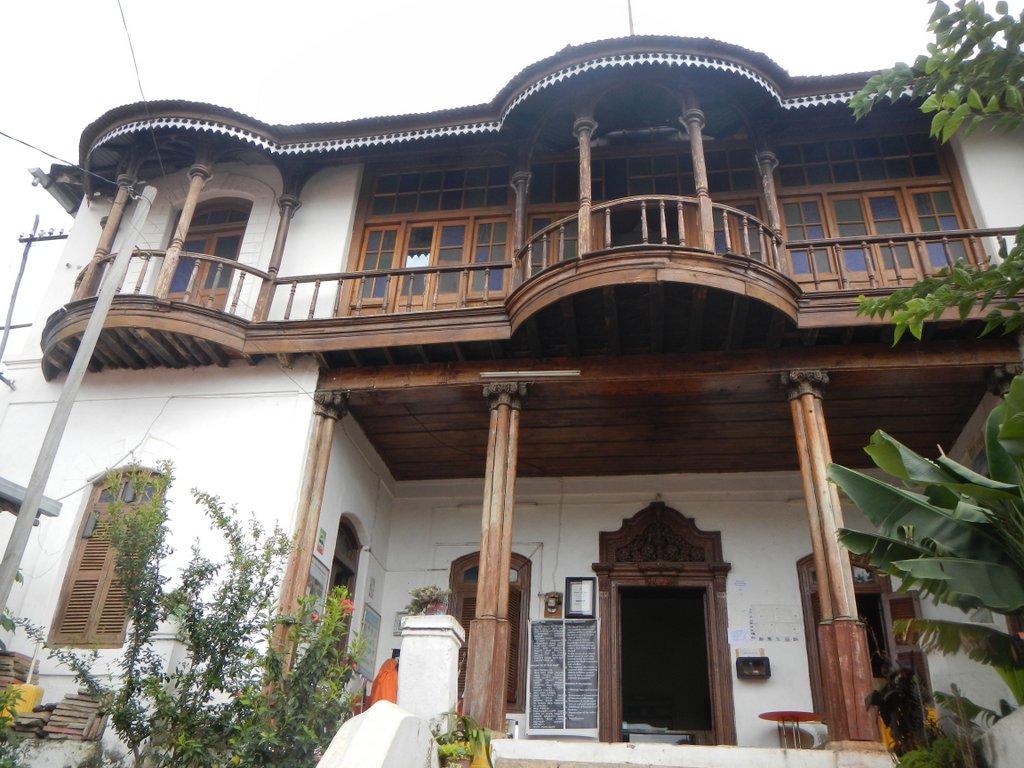 So my final  night was shared with Dr Lemessa for a coffee and goodbye , then Charlie and John for dinner before I ride North and they fly South . I start my trip back to Addis , the two day return with another crossing of the bridge . 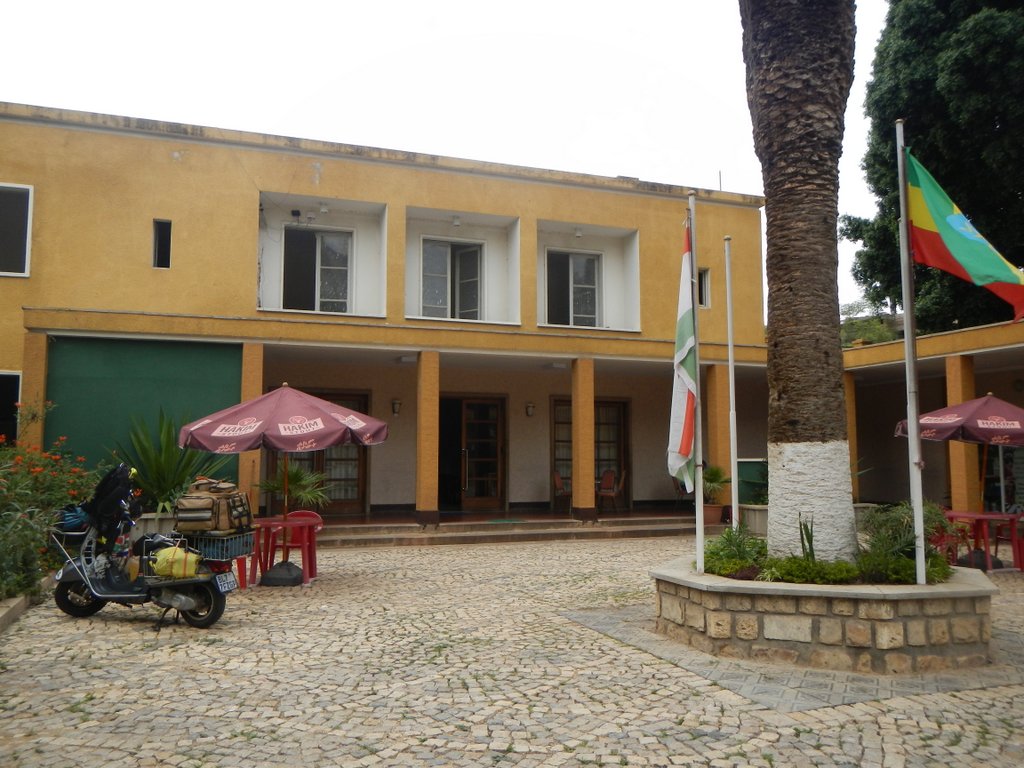 Ancient city with ancient ways thank you for the privilege .

Radio silence in the Serengeti