Vampires , a furious funnel and Don’t pay the ferryman

Monday was spent riding around Kampala , first to the Sudanese Embassy , to hand in all my documentation for my visa application , once done I met up with Parky for a coffee in town and then he took me off to meet the mechanic that would be doing a minor service on Victoria on my return to Kampala at the end of the week . From here it was off to Uganda house to meet up with Ester who had kindly organised a friend of hers to make me a sticker of the Ugandan flag for the scooter , then racing back to pack for my trip up to Murchison falls national park to go and see the falls.

Tuesday , I was up early to make the journey  up to the falls , 200 kilometres of the journey would be on tar but the next 130 kilometres was off road 90 of which ran through the national park and I wanted to give myself enough daylight hours to get to the campsite before sunset come what may.

The road up was great , long and straight stretches that allowed me to make good time and by midday I was paying my park fees ready for Victoria and I to do some game viewing en route to the camp , hoping to encounter only omnivores , herbivores and the like while scootering the 90 km. 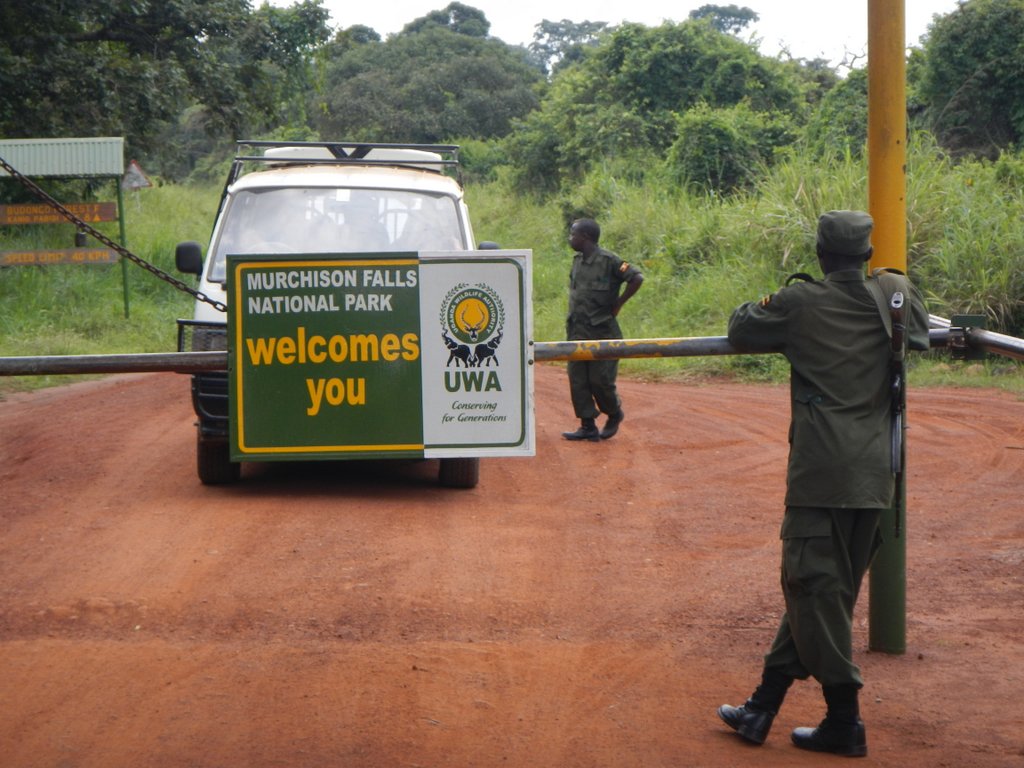 I wanted to make the trip up to Murchison falls for two very compelling reasons , the first ,  it is the place where the Victoria Nile is suddenly funnelled into a 6 meter wide gap and between the Uhuru falls  and this narrow gorge all that flows down the Victoria  Nile  has to get through this tiny area before reaching Lake Albert , making a powerful , misty exit from the waterfall to the gorge . The second reason clearly Victoria meet Victoria . 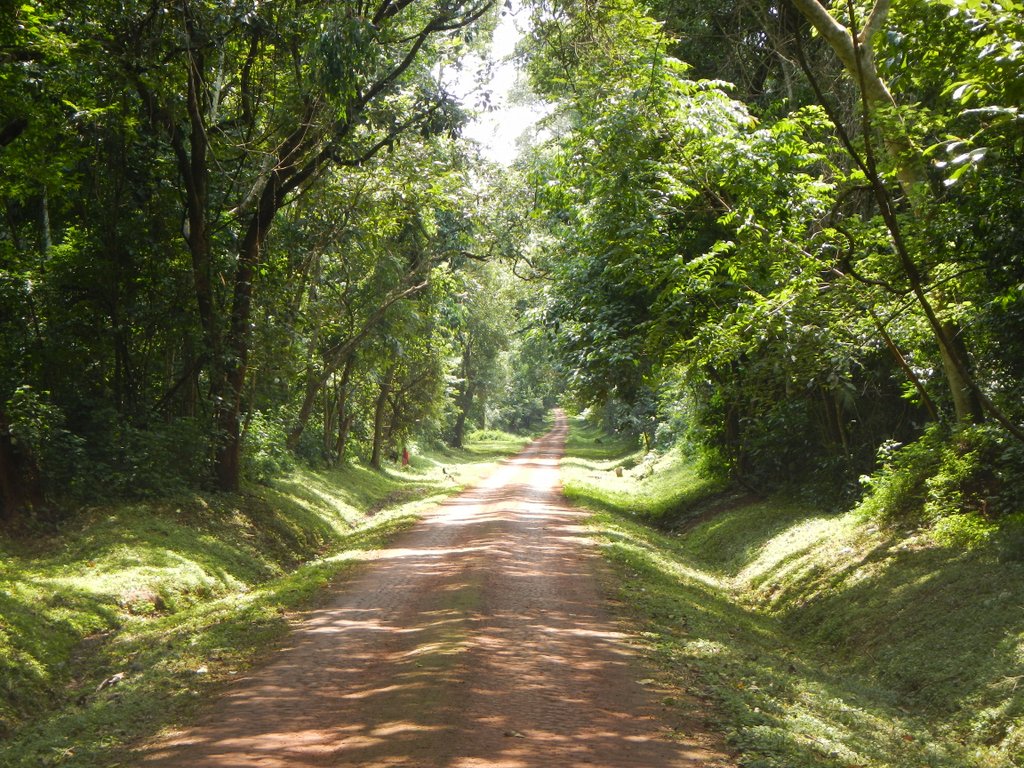 So my 90 kilometres started . 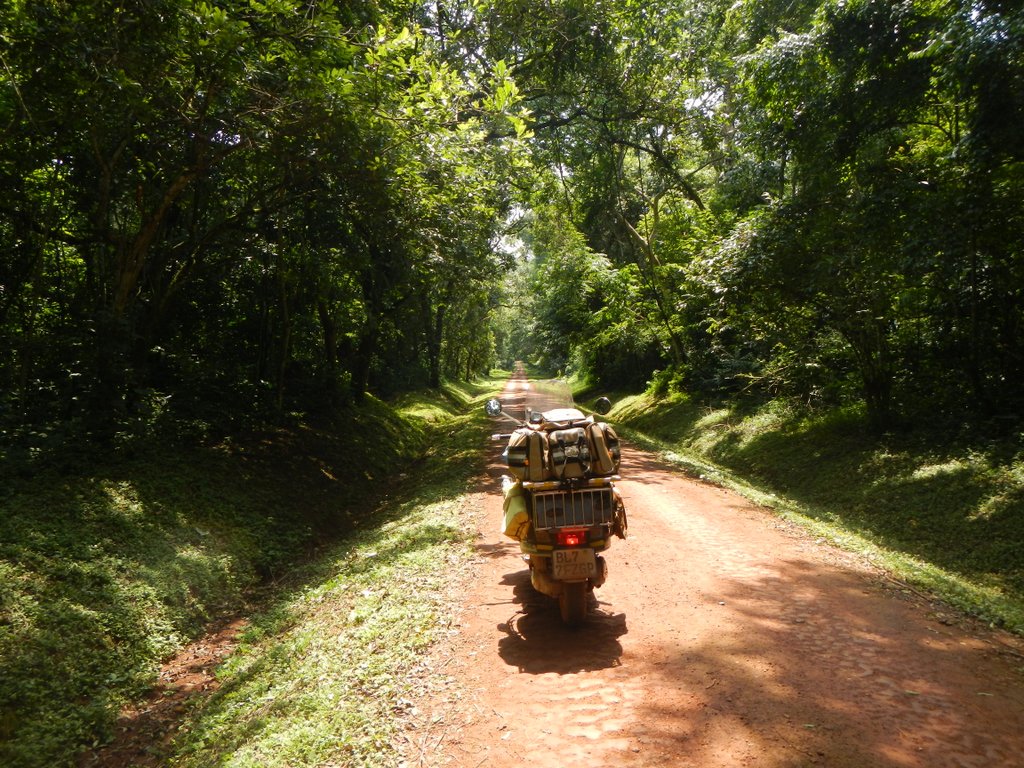 Tranquillity and a leg stretch.

The ride through the park was truly breath taking ,  a three and a half hour trip  with forever changing scenery and road conditions just spectacular  , arrived at the camp set up and made the necessary arrangements for the hike the next morning  , early to bed as I had a 35 km ride back to get to the falls to start the hike . I spent the night with a family of pigs with tusks foraging around my tent , they really should learn to chew with their mouths closed , noisy bunch . 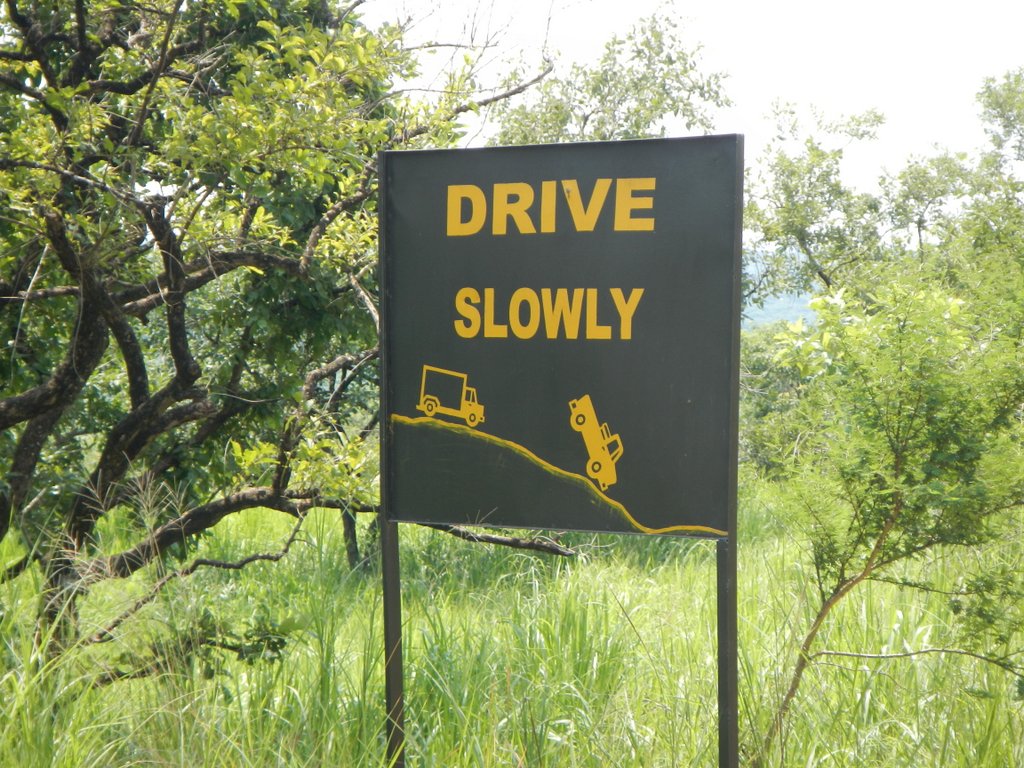 Never mind no scooter warning , we will be fine 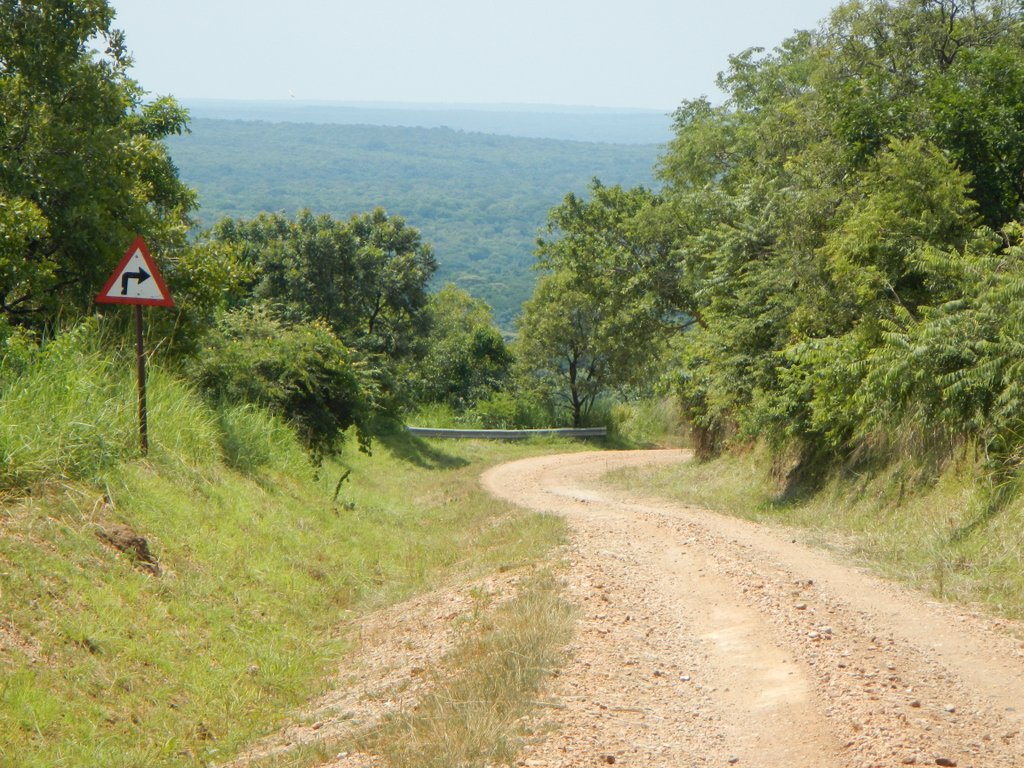 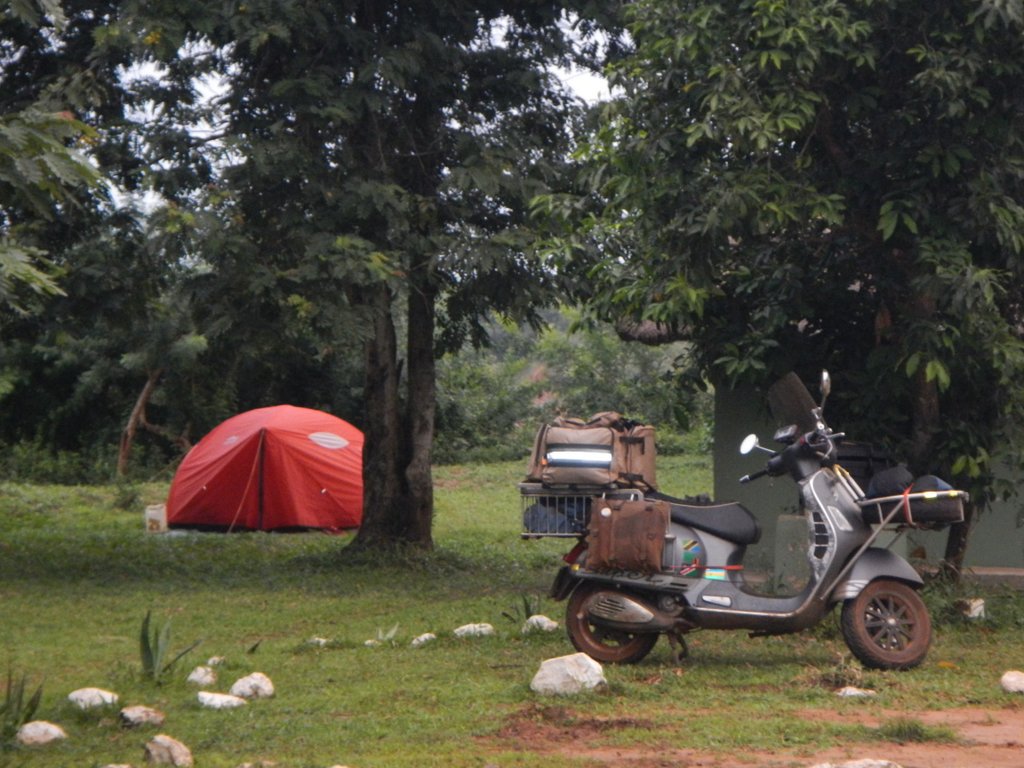 Once again in cruiser country

Up early to make my way to the falls , with the early morning mist all about , Victoria and I rode keeping our eyes peeled for elephant or any other enchanted forest inhabitants , including potentially bumping into Gandalf or his followers , this really felt like lord of the rings country . 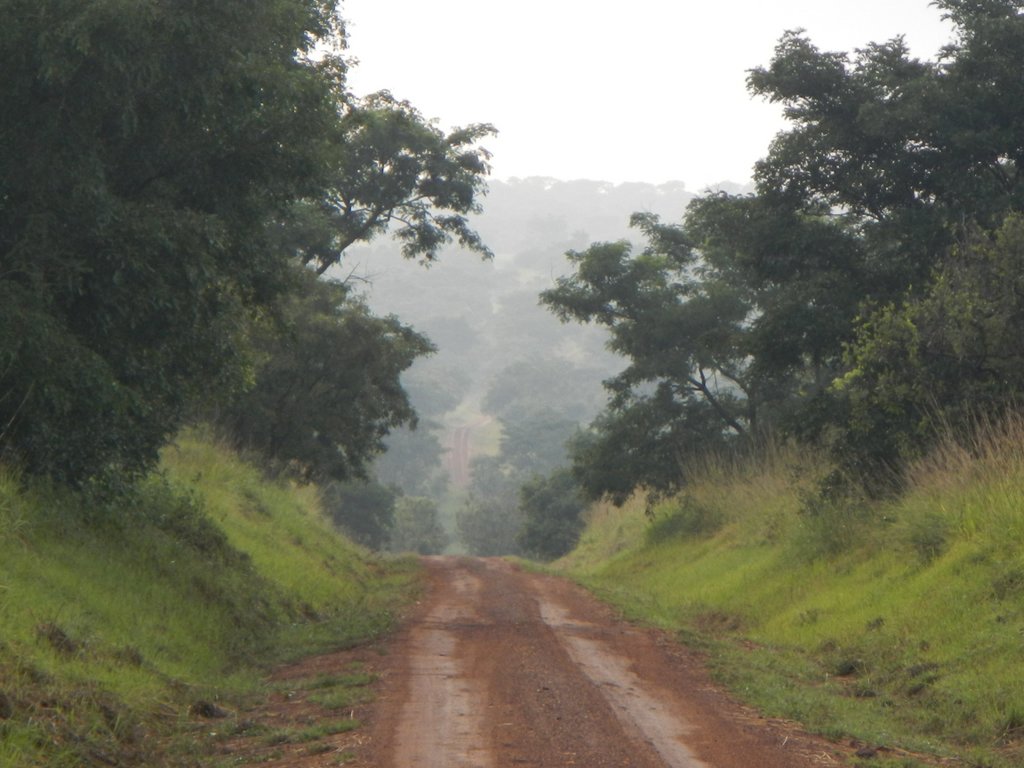 On my ride into the park  , Victoria was converted into free transport for tsetse flies and I was the buffet , when you are in a car you can close the windows , kill the few that made it in , but on a scooter they just land and feast , having been feasted on I dressed in light colours and wore my luminous construction vest to try and keep them off , nothing helped , they sucked through jacket , buff and everything else I had tried to cover up with . So  with no defence I tried to ride at a slightly higher speed which helped a lot but the second I had to slow they would attack once more . Those day walkers would stop at nothing . 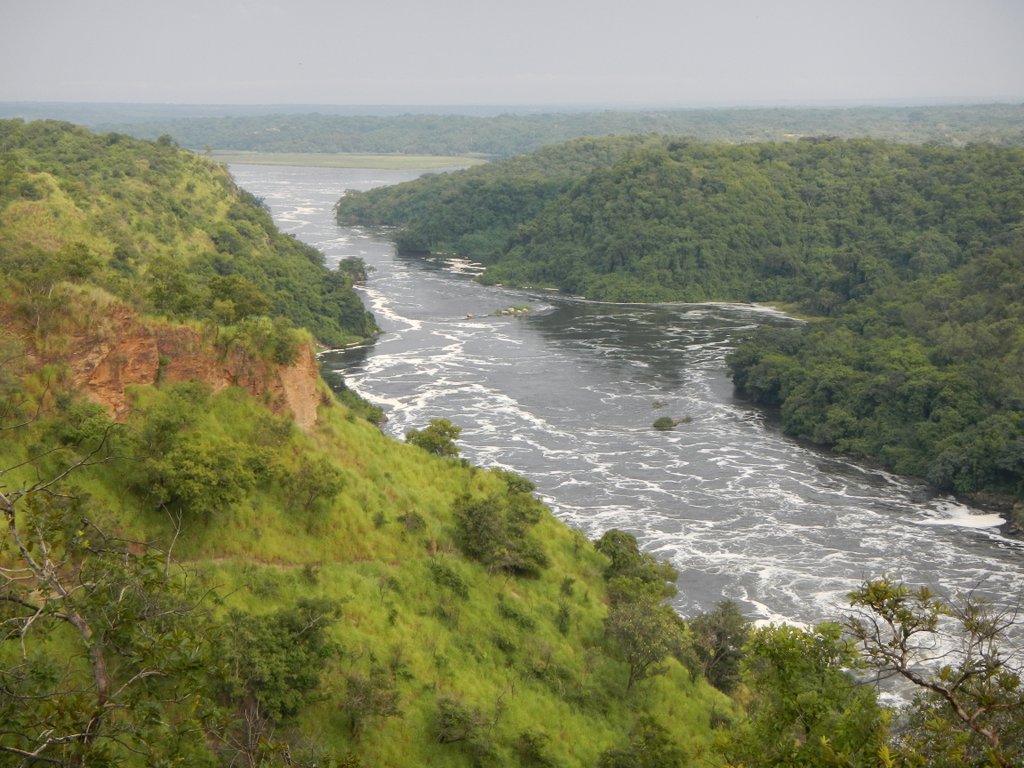 My first glimpse of the Victoria Nile.

As per Ugandan law , I had to hire a ranger and off we set on our hike of the falls and the surrounds . He was a little slow so we made a deal , he would wait a strategic points and I would hike at my leisure and collect him on my way back , worked like a charm. 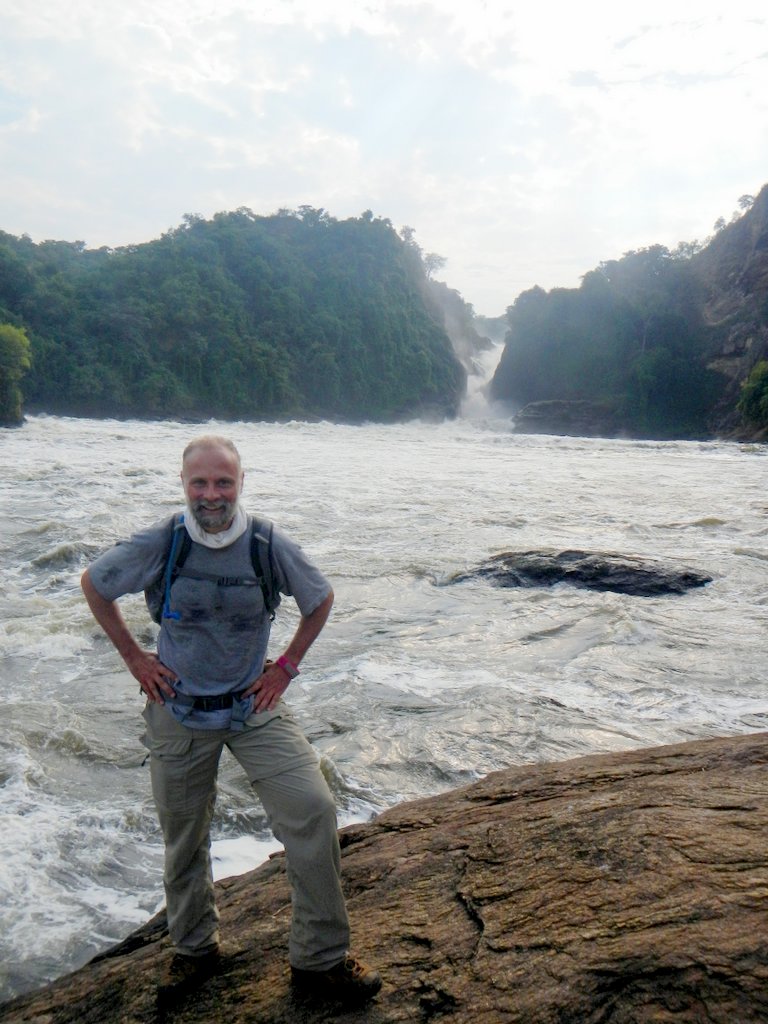 Murchison falls the 6 m funnel in the background. 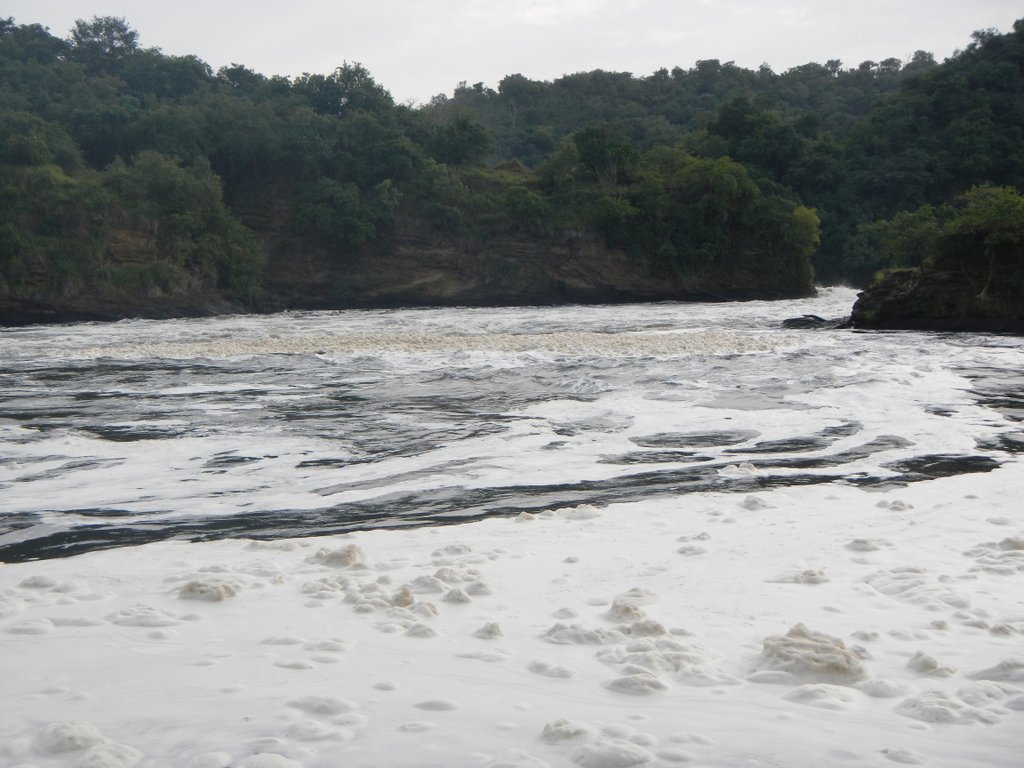 Jacuzzi foam from the force.

The hike was really beautiful and so worth having made the trip , you just cant believe that so much water is squeezed through that small funnel and then down the gorge. 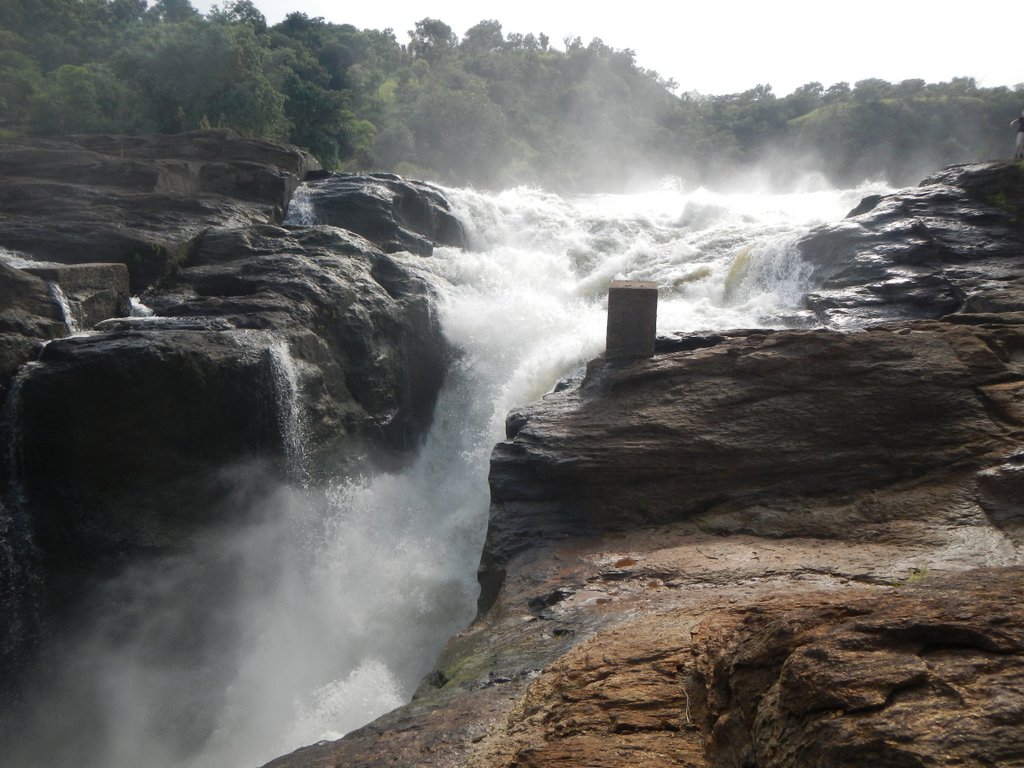 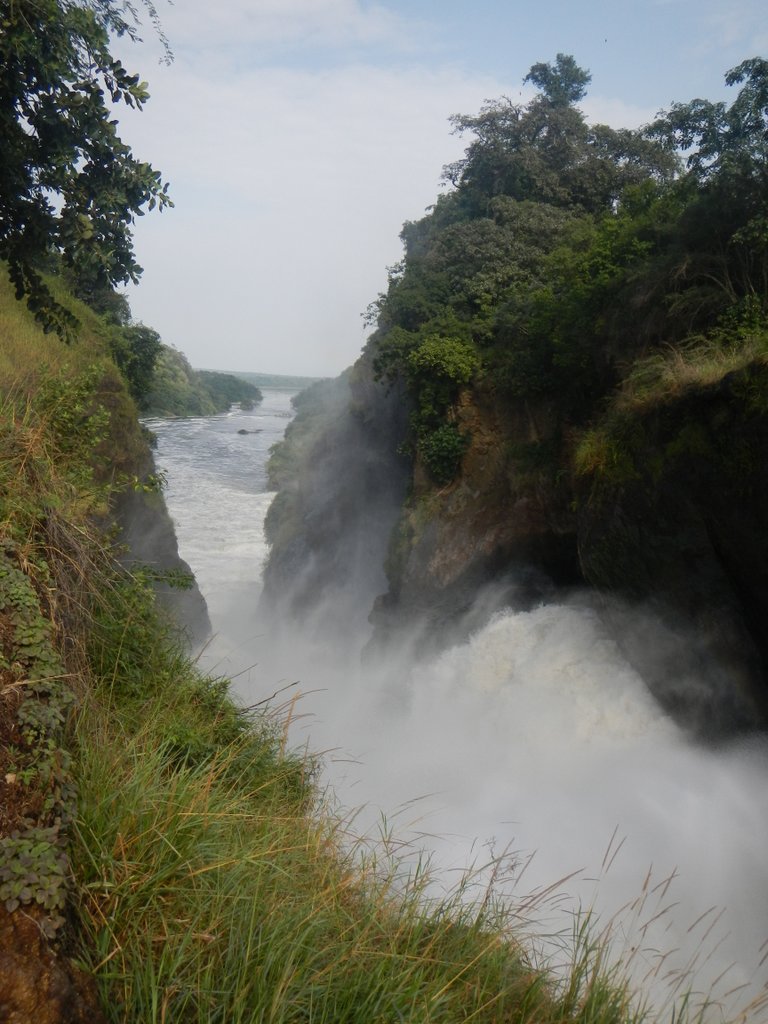 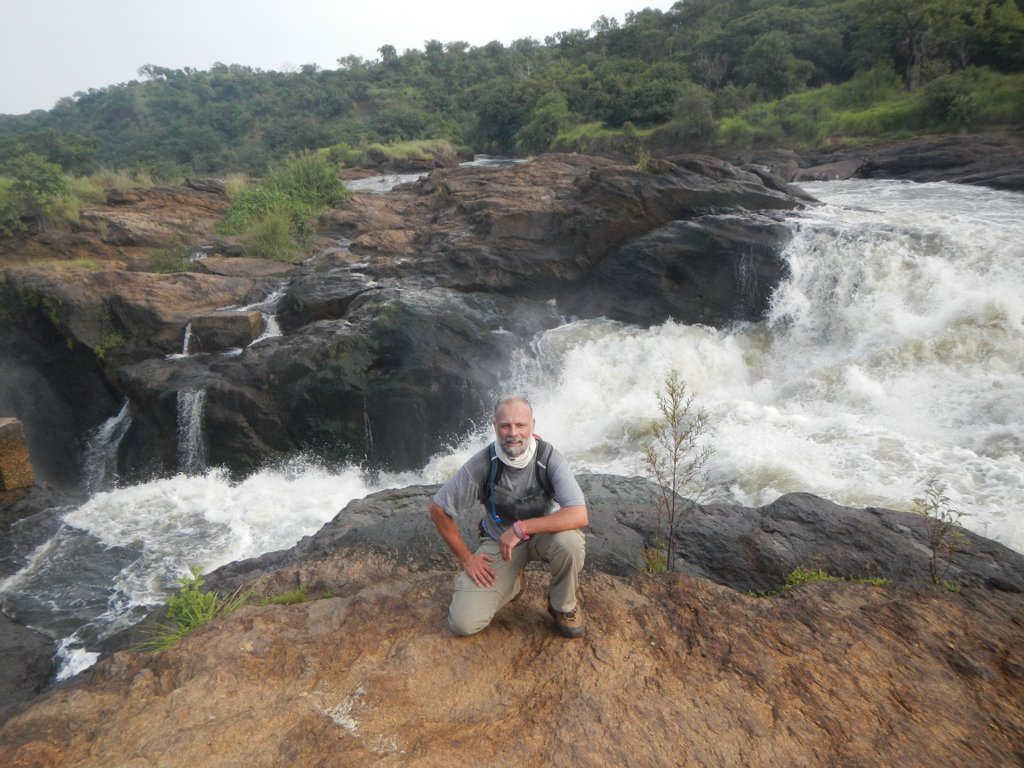 That’s me at the top of the falls. 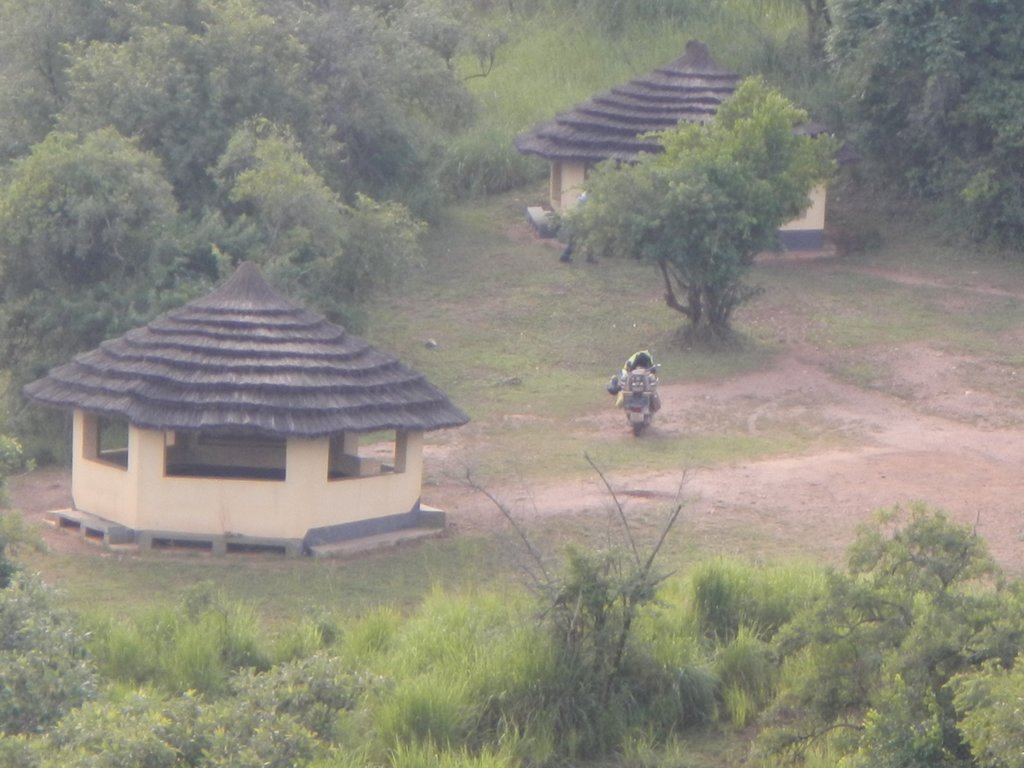 What a fantastic morning , I got back to camp , realising my fuel was a little low , the consumption higher due to the road conditions , it was then I realised I had no  fuel in the petrol bag , so I would have to take the ferry across to the one pump for hundreds of miles around. The ferry runs every two hours , so it took me almost four hours to buy four litres of fuel and cover a distance of  one kilometre to the fuel depot and the one kilometre back to the campsite. 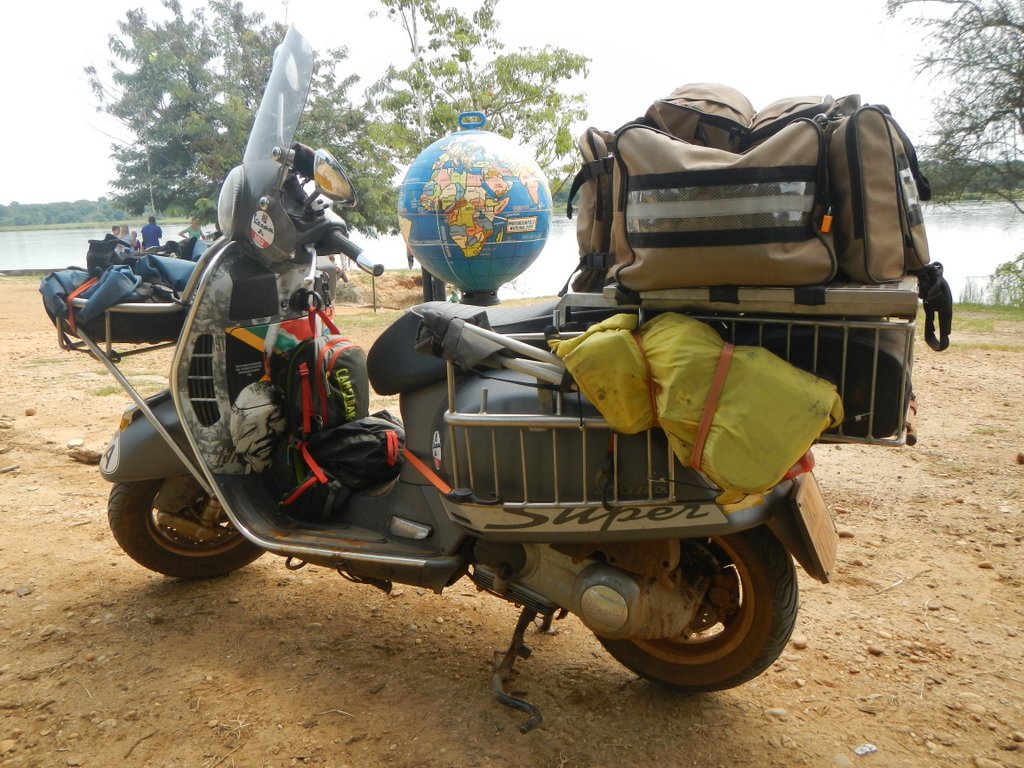 Africa held up by Vic 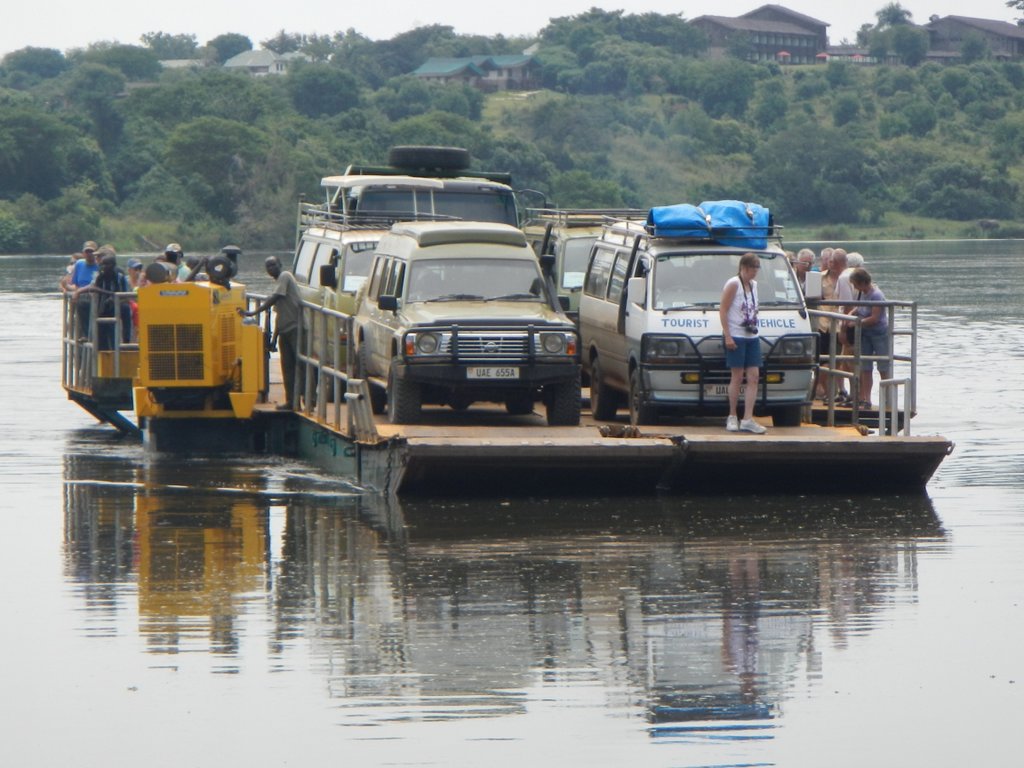 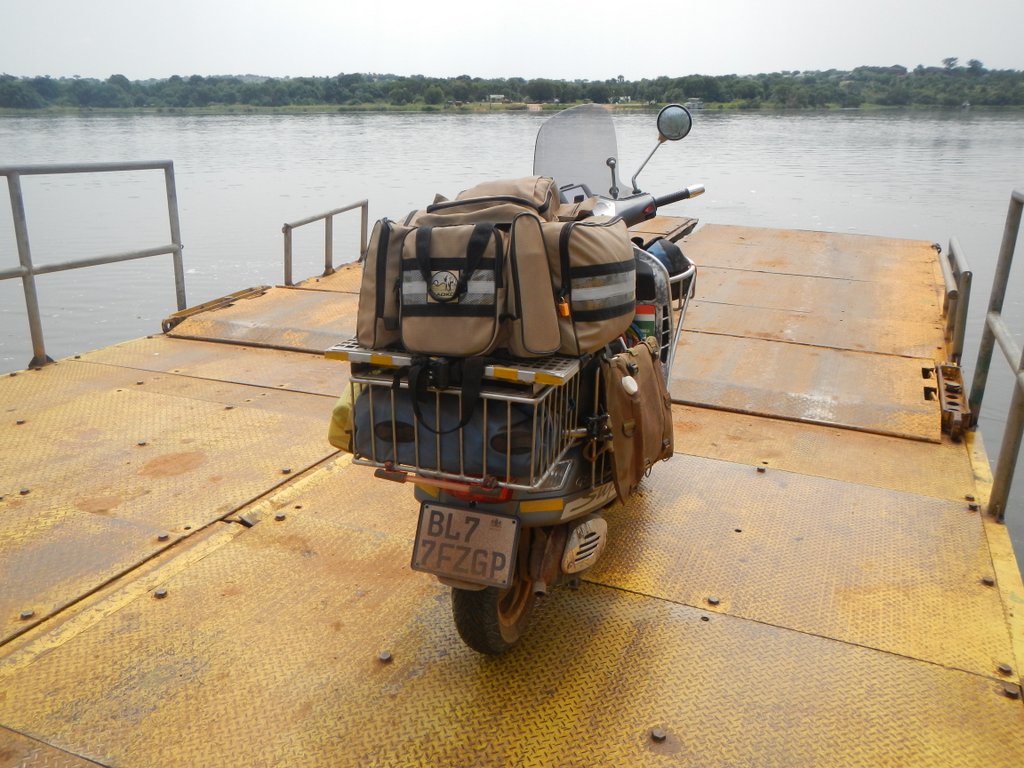 Victoria on the Victoria Nile.

I rode to the ticket office at 11.30 to secure my place on the ferry once it arrived at 12h00 which really is 12h30 to bored for the 3 minute trip , rushed up to the lodge on the hill to purchase my voucher for the fuel , back to the single pump  , while filling up had this herd pass by on their way somewhere . Never before have I seen a herd of elephant while at a petrol station. 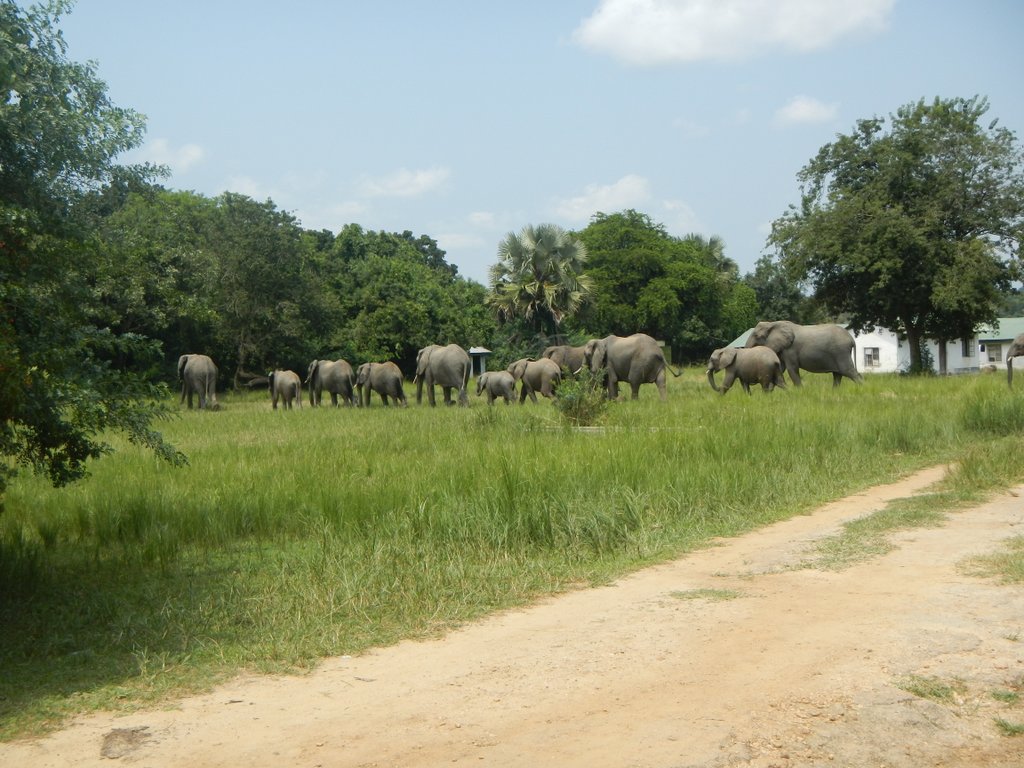 I then rushed back to the ferry , which had already left , so back to the lodge for lunch to kill time until the ferry returned for 14h00 that was actually 14h40 so my fuel stop took most of the day , the elephants and the cappuccino made the lazy hours very worthwhile. On my initial  wait for the ferry to arrive  I contemplated the globe , the  African aspects in  particular and came to the realisation , We still have a way to go , Vic and I. 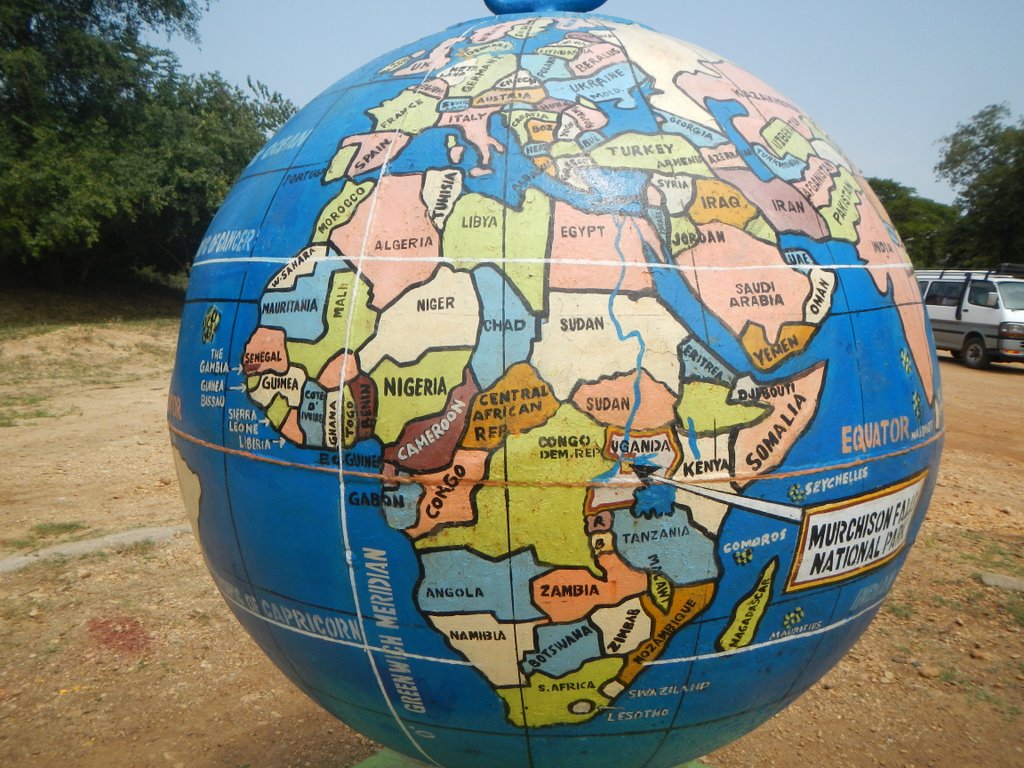 From where we came. 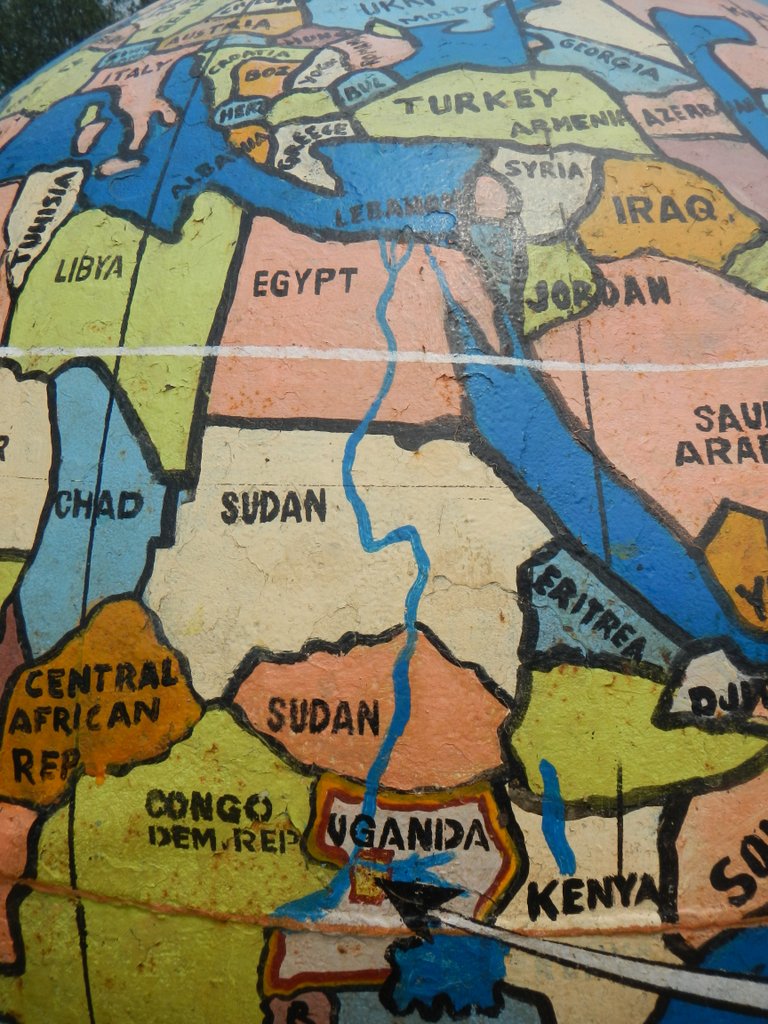 Finally back in camp to shower and treat my vampire bites , that when naked I realised covered the majority of my body , I applied cream to all those I could reach hoping that the itching would subside and allow for a good nights rest , I was really tired after my falls hike and fuel mission.

By sunset the heavens opened and the rain poured down , I sat under the thatch watching the lightning dance across the sky and could not help thinking about the road out of the park , bad enough dry what would the water do? Off to bed to sleep nestled up in the tent  , while the rain came down and the lightning gave me intermittent daylight .

Out of Africa or not ?