After a night of tossing and turning , with the next couple of days riding plaguing my mind , I was up and off on my way to Archers Post ,  the starting point of what has been dubbed ” hell road ” by the overland community , the 500 km between Isiolo and the border town of Moyale .

I had been advised to put the scooter on a truck in Nanyuki and then resume the ride from Moyale  into Ethiopia and up . The reasons being that the road conditions are so severe that the route is a destroyer of all things mechanical , is prone to tribal outbursts , very volatile , Somali bandit country  and that  riding alone was far from a god idea . So the whole previous nights tossing  and turning and now while riding towards Isiolo  my mind doubted and questioned my decision to ride the whole way. In part my decision was helped by some advise from my road mentor Riaan who did this exact route last year and loved it , the other Francis who I met in Uganda that took a tour group through and said to me that the road was possible , it might take 3 or 4 days but we could  get through  , the last reason was that  my experiences travelling through Africa thus far ,  had only ever been filled with  warmth and kindness and  meeting fantastic people , so in  my mind  my only worry was the road and would Vic and I make it . 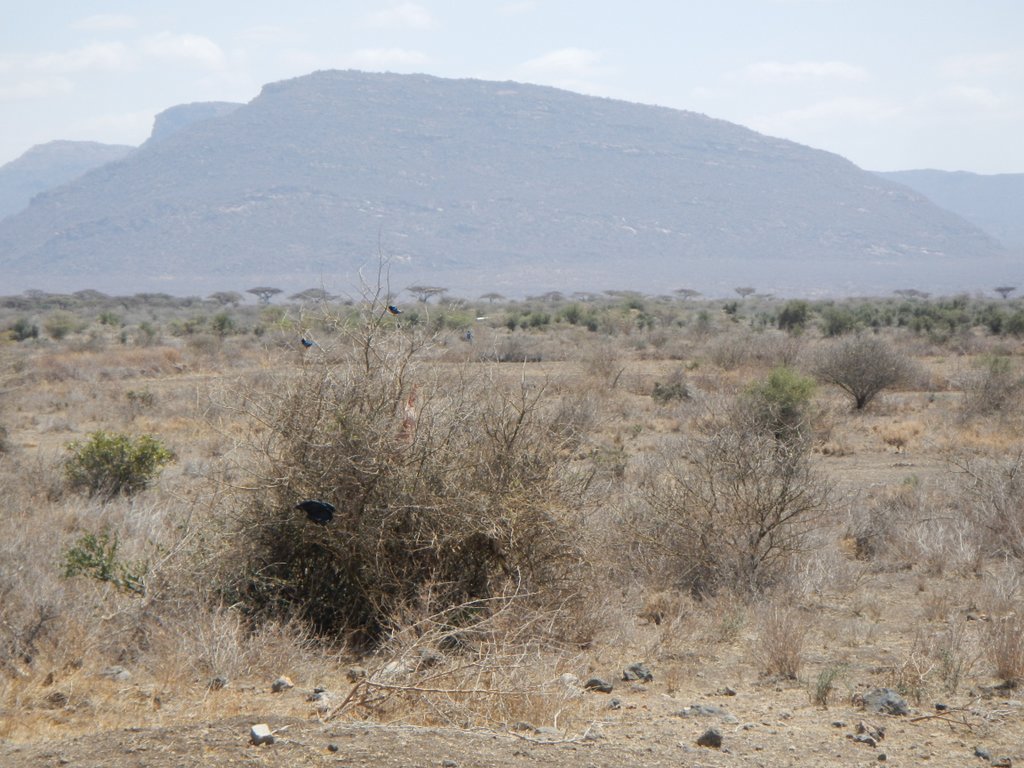 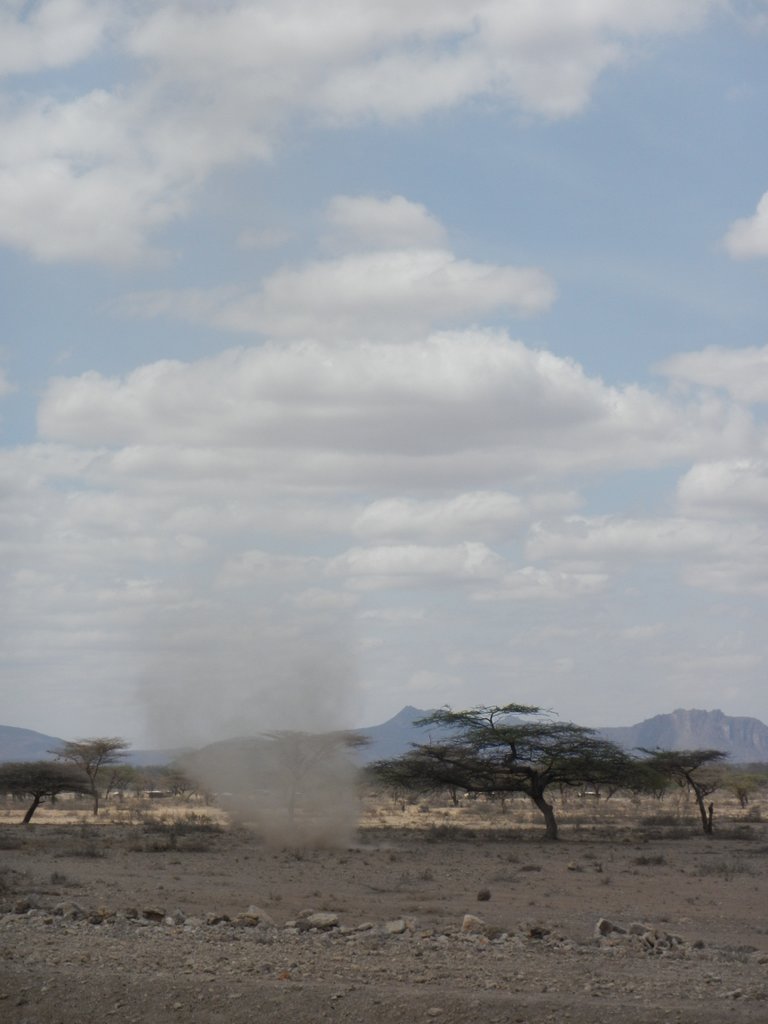 Dancing dust Tornadoes fill the air , as one dies a new one born.

So we took on the ride to Archers post for our first nights stop , it was not a long ride and on good roads so after stopping off in Nanyuki to stock up on water and high energy snacks we arrived just after lunch time in Isiolo where I filled up and then rode  towards Archers . While riding I was listening to my I pod set on shuffle and about 10 minutes out of Archers the Chris Rea song road to hell started playing , how inappropriate I thought . 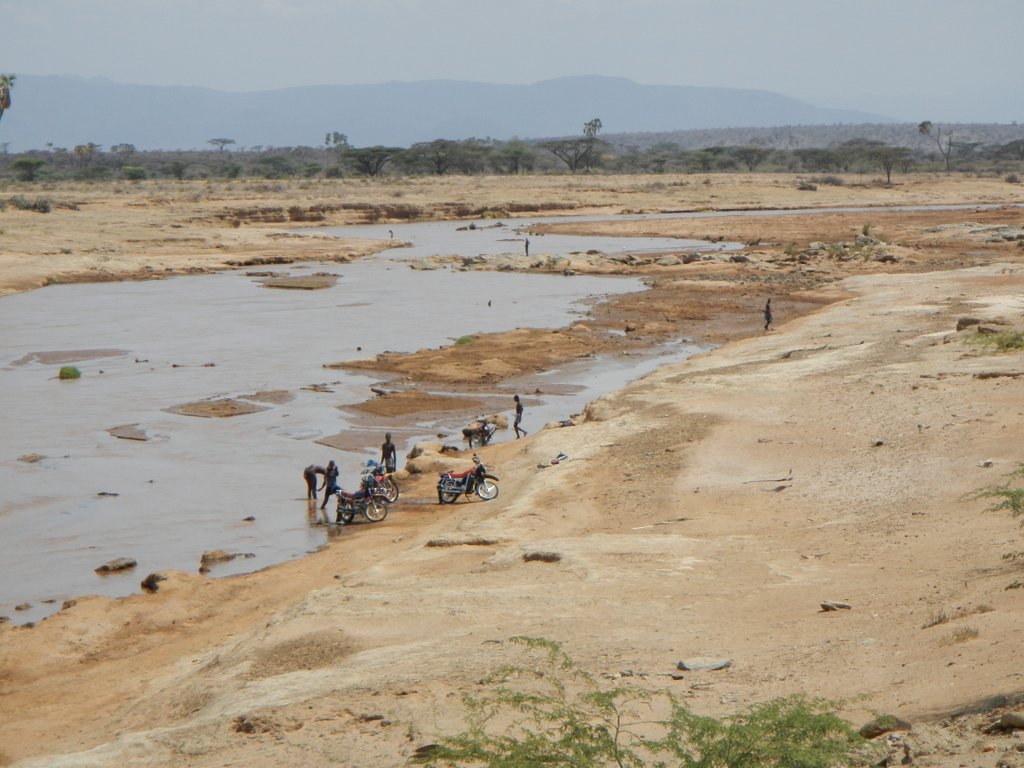 Last water I was going to see for the entire journey.

I found the  Catholic mission , The Mary Immaculate Parish and a room for the night , I spent the afternoon still worring and hanging out with the locals who passed through the parish , answering many questions , shaking many hands and general chit chat with some interpreter intervention required now and again. Dino one of the young students took me around the town , we got a local sim card while I observed the effects of alcohol and the mind altering plant Khat on a community against the pride of the traditional Samburu customs and dress  , the beauty of both the men and woman astonishing that you find yourself staring a little to long . In this harsh place to find such colour and beauty . I popped into ripples for the surprise of my life . Here in the middle of know where was this fantastic little restaurant serving freshly squeezed juices , fantastic tea with a menu that rivalled some of the hotels I have stayed in . 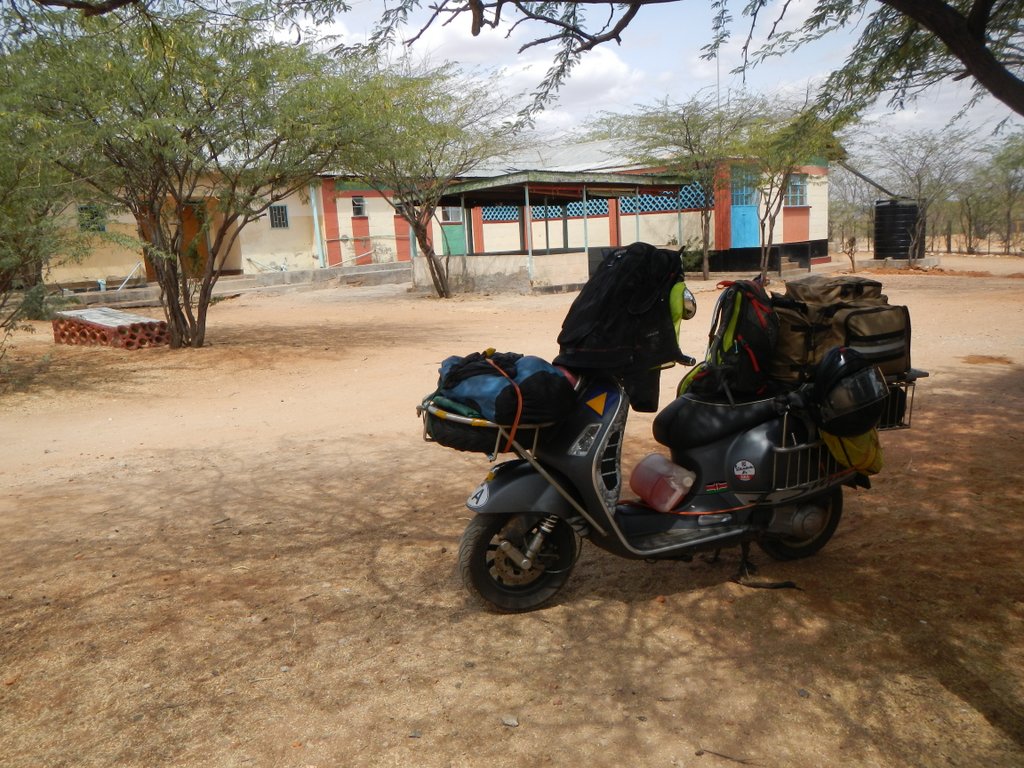 Victoria at the Parish

I met the owner a gracious hostess Stellamaris  who opend this gem but four months ago , so to all those travelling North through Archers Post ensure you make a stop and enjoy the company , hospitality and great  delights on offer from Stellamaris. Thank you for a great late afternoon tea. 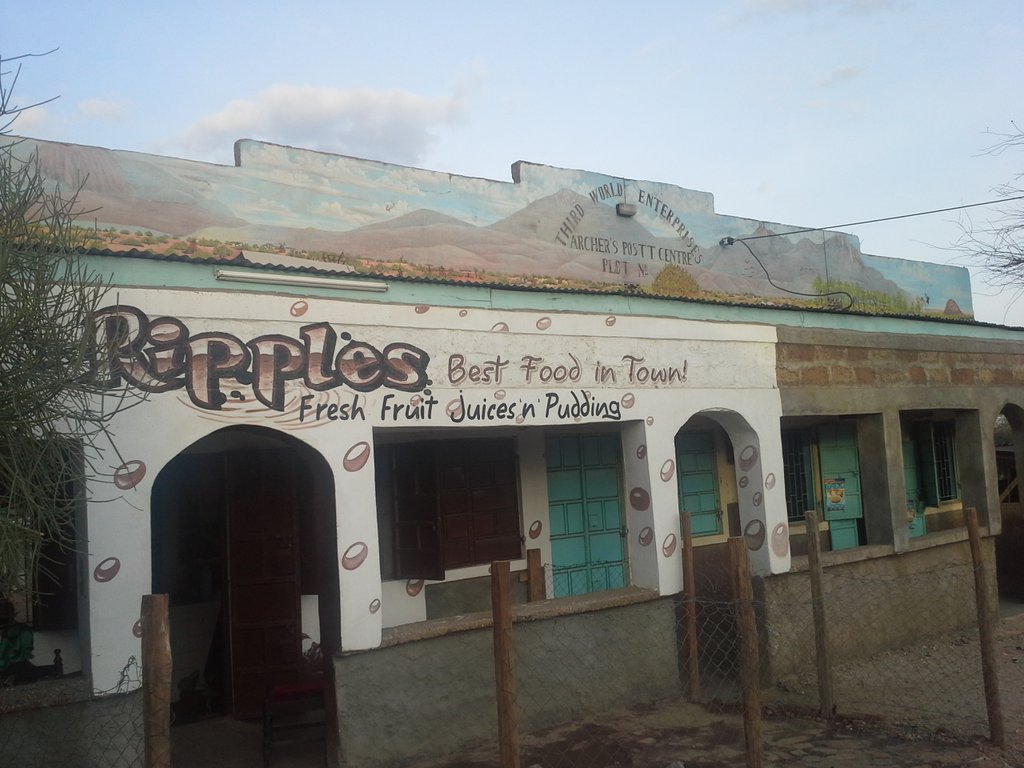 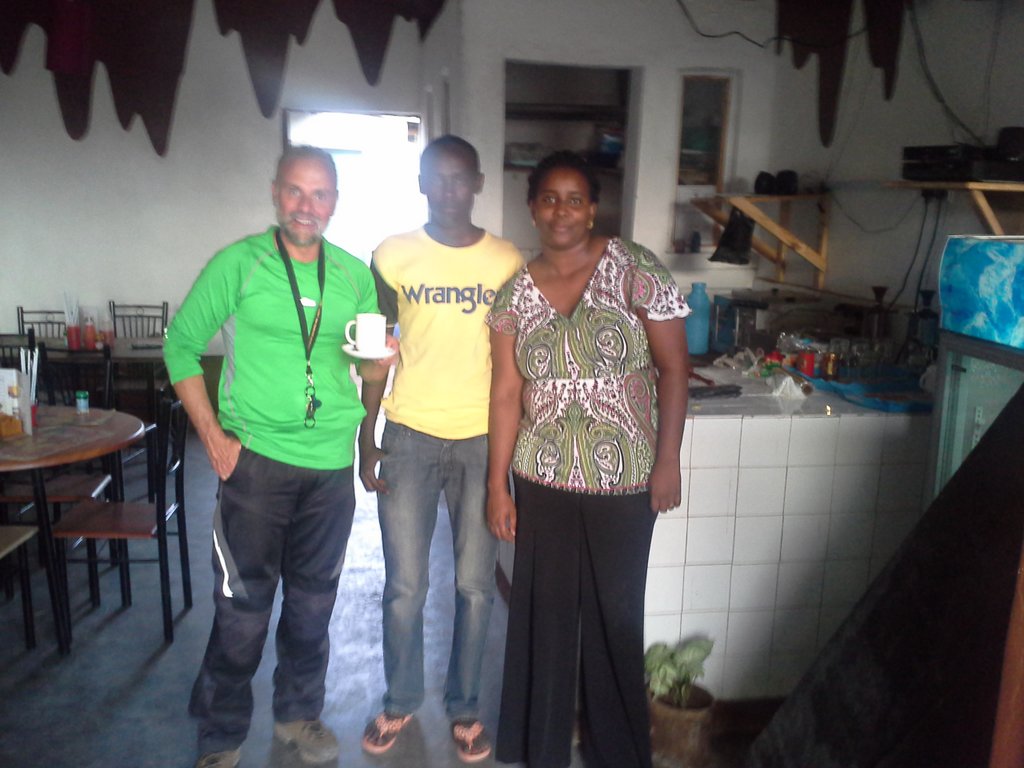 High tea for me with Dino and Stellamaris 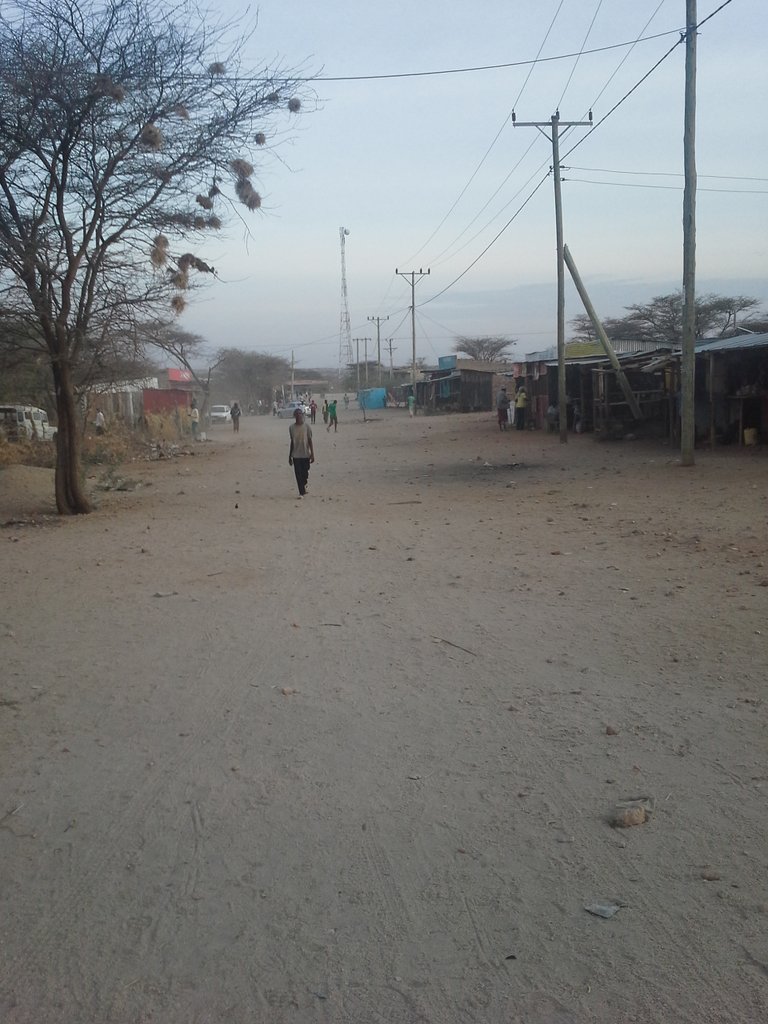 From here back to the parish to meet Father Peter Leseketeti for dinner , yet another fantastic meal with great company , on the night before the ride. Then off to bed to try  and sleep , for who knows what tomorrow will bring.

A leopard on the spot