Sleep came and went , robbed of  dreams and deep sleep , I was up by four , unable to find comfort in any position , unable to close my mind of what lay ahead , so as the first light started plucking the stars from the sky I was on the road , the knot in my stomach like that of a hangman’s noose . Vic and I rode off towards Marsabit , listening to my soloscooterist compilation , playing through my headphones , here comes the sun. 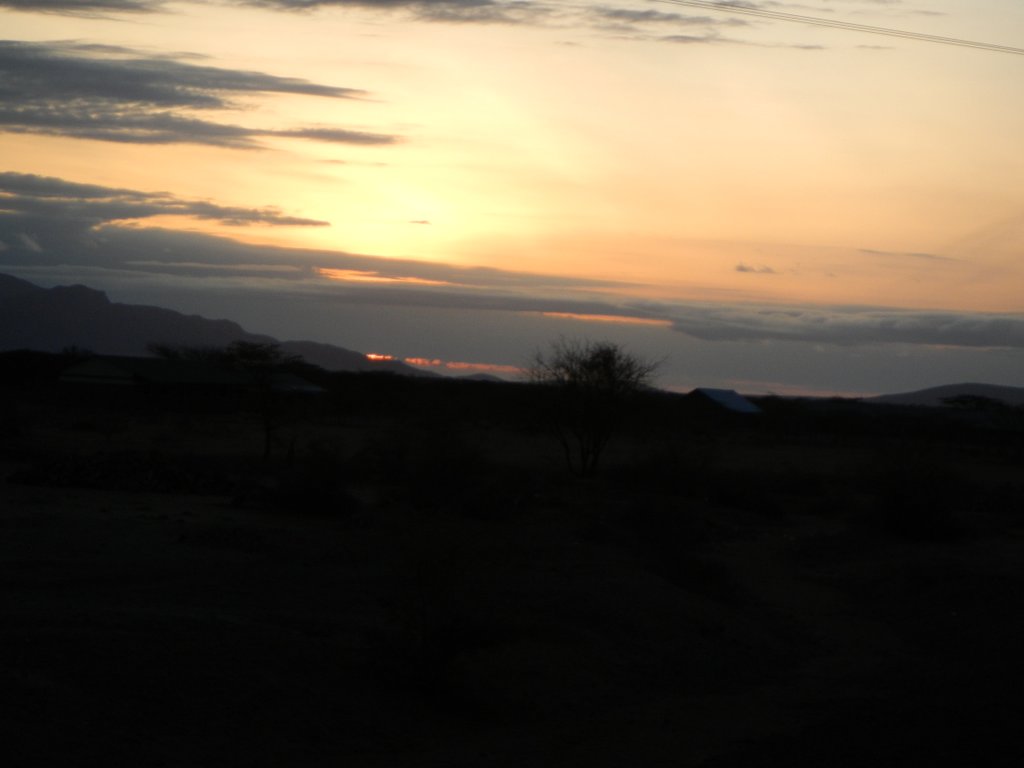 The beauty of this lost land in the morning light  gave me some comfort and it did not feel that harsh in early morning . The wind  strong with no barriers to her flight kept  knocking and buffeting  our cut out as we made our way out of Archers on this heavenly road that would take us to the one known as “Hell Road” 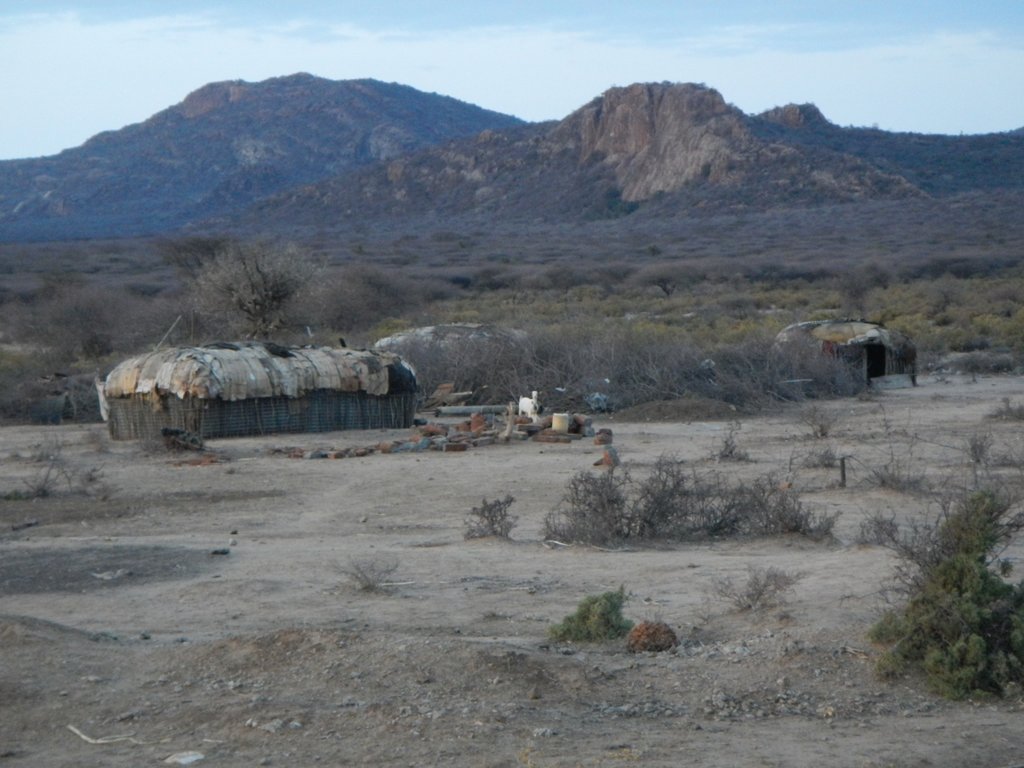 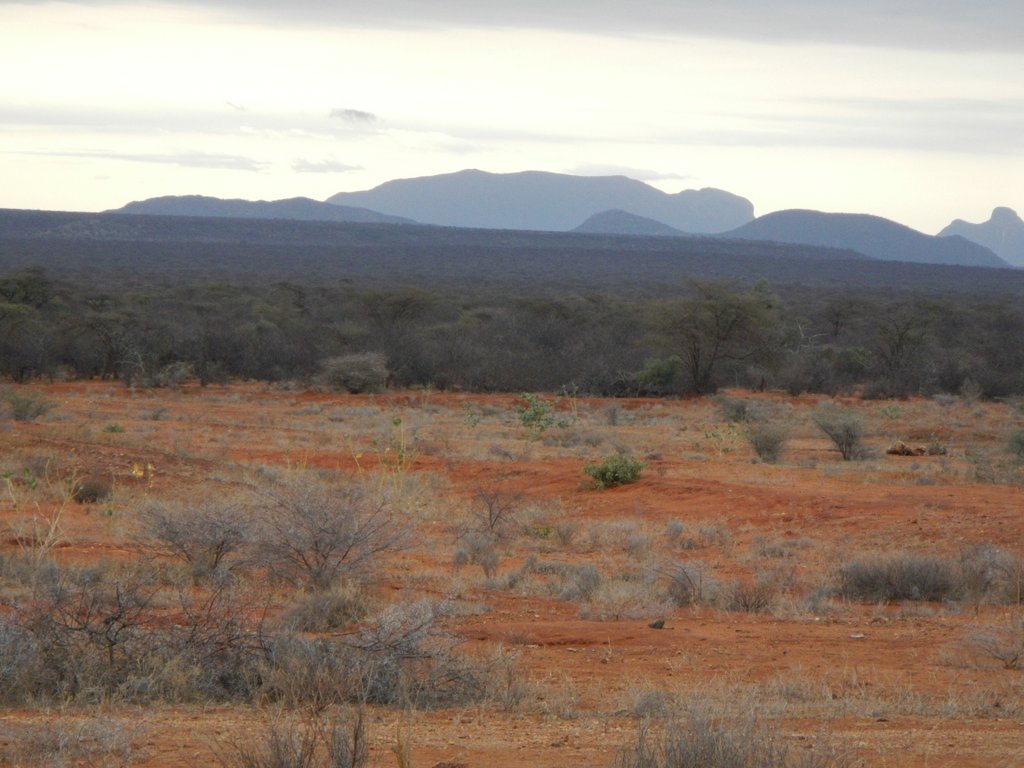 How can nothingness hold such beauty.

The tar lulled me into a false sense of security , my spirits lifting as we rode , the knot offering a little slack as the kilometres wound down , the GPS saying 250 km to Marsabit at Archers now 200 km and still the tar carried us , may be that just how hell courts you . Still the tar , then I saw the end , my heart missed a beat or three as the GPS said 120 odd kilometres to Marsabit  , not bad I thought it is still early how bad can it be ?. 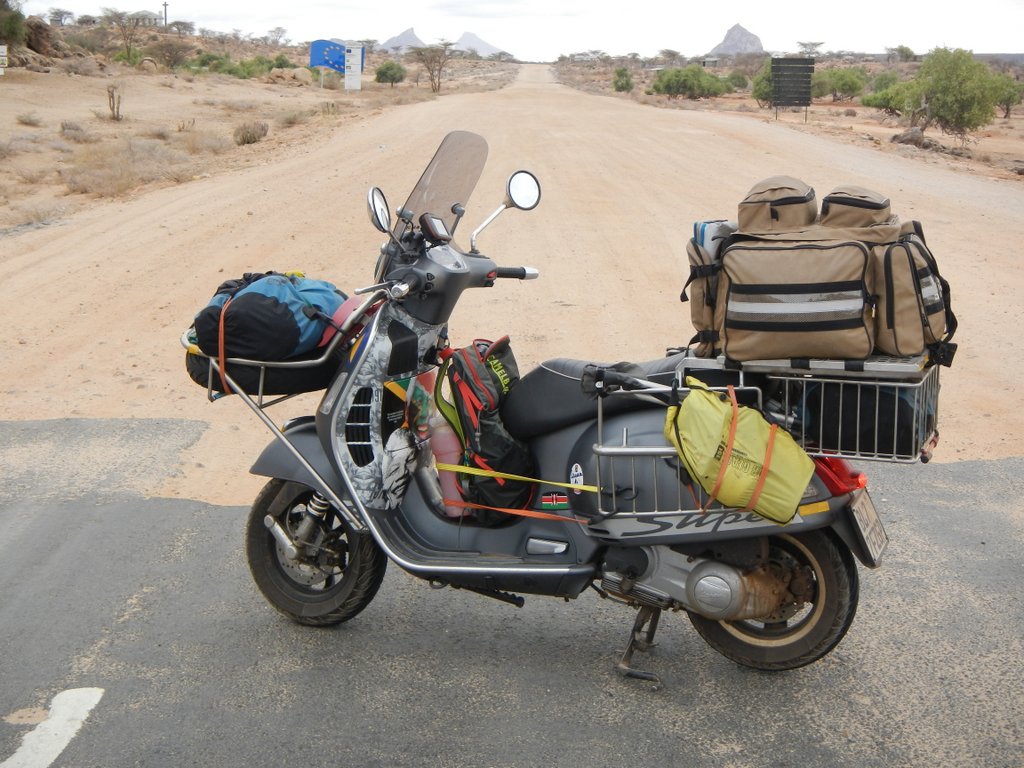 The line that divides .

Off the bike , tyre pressure down , fuel topped up , I took a deep breath asked Vic to forgive me for I knew not what I was about to do and off we set . From the outset the conditions appalling , I looked down at the distance covered after and hour we had done 20 kilometres , the ruts and rocks never ending , Victoria’s front shock bottoming out more times in one kilometre than I could count . The decision to ride haunting me , should I turn around ? We will never get through this , If I turn around now it is only 40 kilometres back to tar . Thoughts of breaking Victoria , unable to get above 20 km per hour , her temperature gauge rising uncharacteristically as I could not get the speed up high enough to cool her properly , what happens if we breakdown , what about the bandits so these thoughts plagued me . 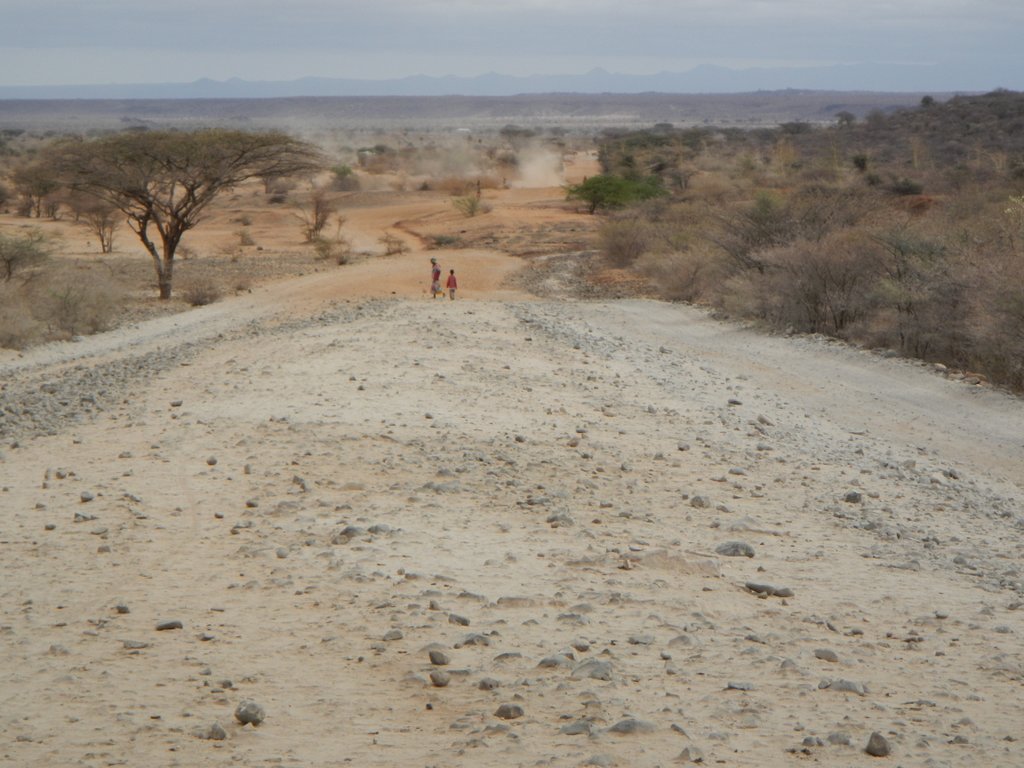 I decided to stop the what ifs and focus on slowly , slowly getting us home , I started stopping more often , drinking more water , stretching  , taking in this unbelievable ladscape when I could take my eyes off the road , and so the kilometres to destination wound down . 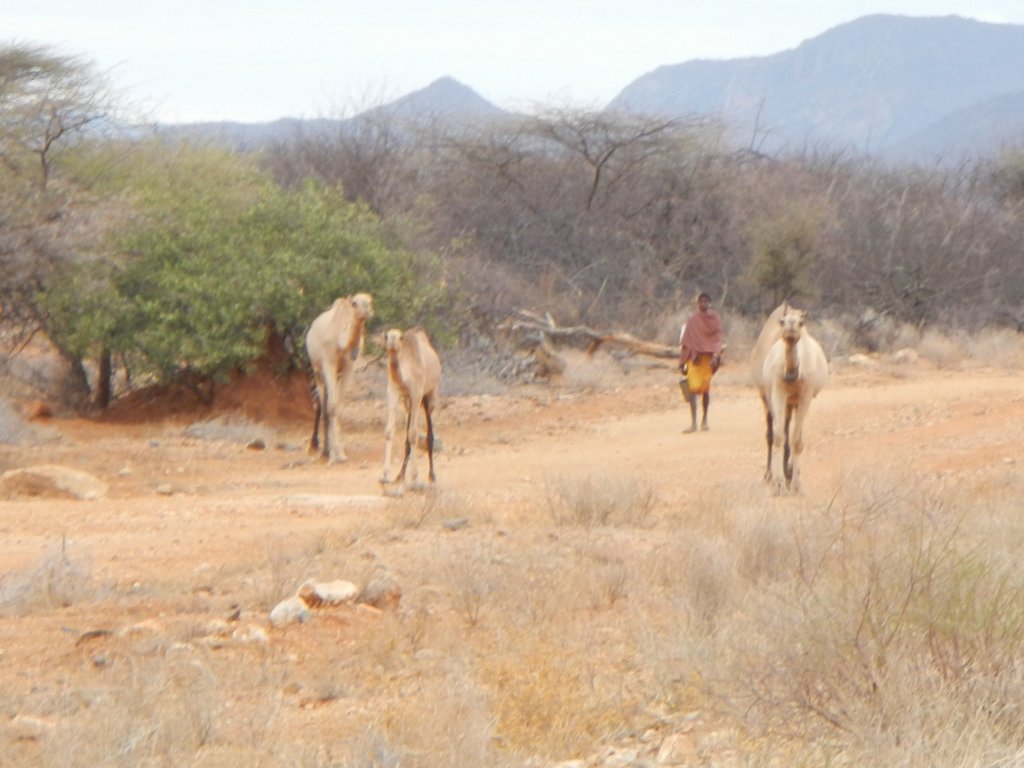 Camels thrive out here , train after train you pass , hundreds in number. 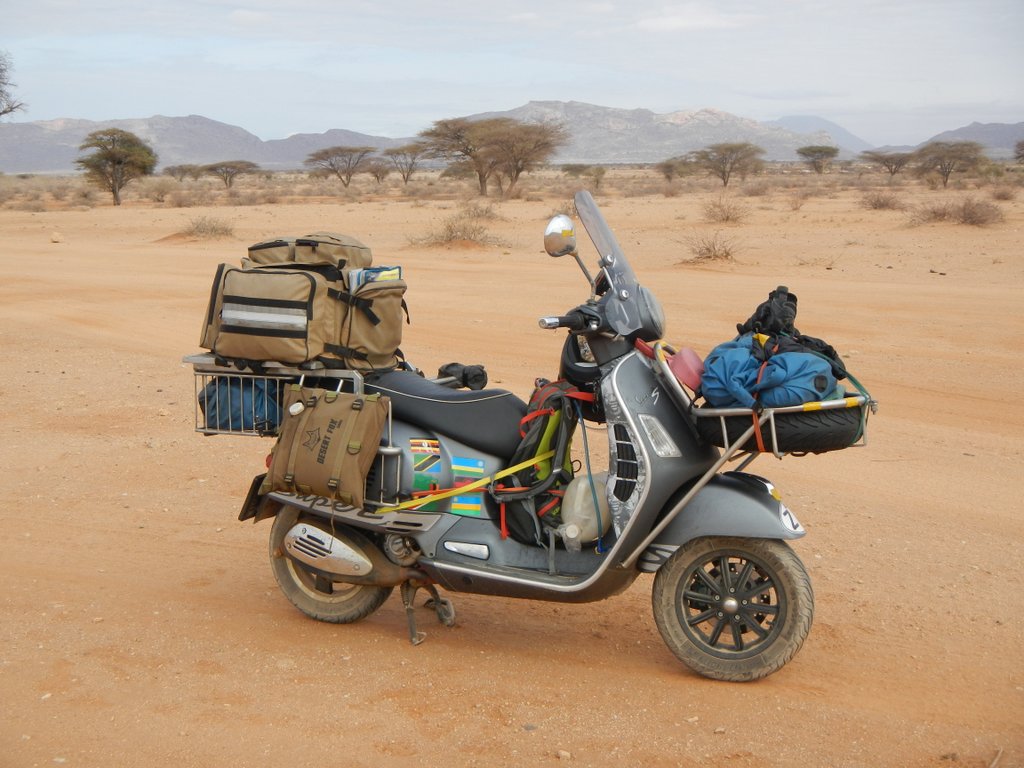 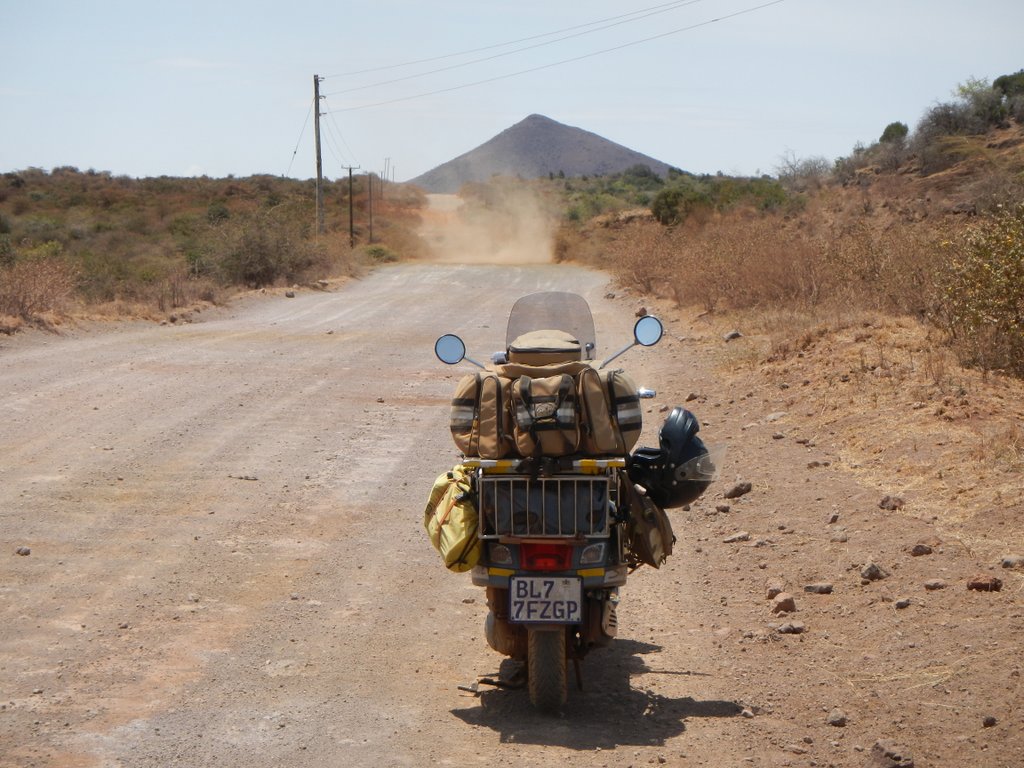 Will this ever end .

Just under 9 hours later with an average speed of  just above 25 odd kilometres per hour we arrived battered , bruised and abused in Marsabit , I just don’t know how we got here , I felt totally shattered .

I checked into the Nomads hotel , took  the biggest bed , the longest of showers and felt that wave of dread return  as I thought tomorrow we have to ride again . After some scrumptious goat samosas , sweet chai , I felt some strength return .

While in the hotel I met two local entrepreneurs , so I thought I would enquire about the road , once again I was advised to put Vic on a truck to Moyale , that the next part is worse ,  so I was told , my heart sank . I spent the rest of the afternoon in the great company of Sadick and Salim  chatting about the world and more , trying to take my mind off tomorrow . Before  we said our goodbyes , Sadick and Salim gave me their cell numbers and said if I ran into any difficulty on the road just to call and they would send help and come and get me . This offer was just the boost I needed and I resolved to get this road done .

Armed with my offer of help and cell numbers I went to bed , I slept well for a couple of hours and then the prospect of what lay ahead took my sleep . I packed up in the rain and cloud that had moved into town , had breakfast , waited for that light to arrive , said goodbyes and rode off in the mist and rain , hoping that if my morning started this badly it could only get better . 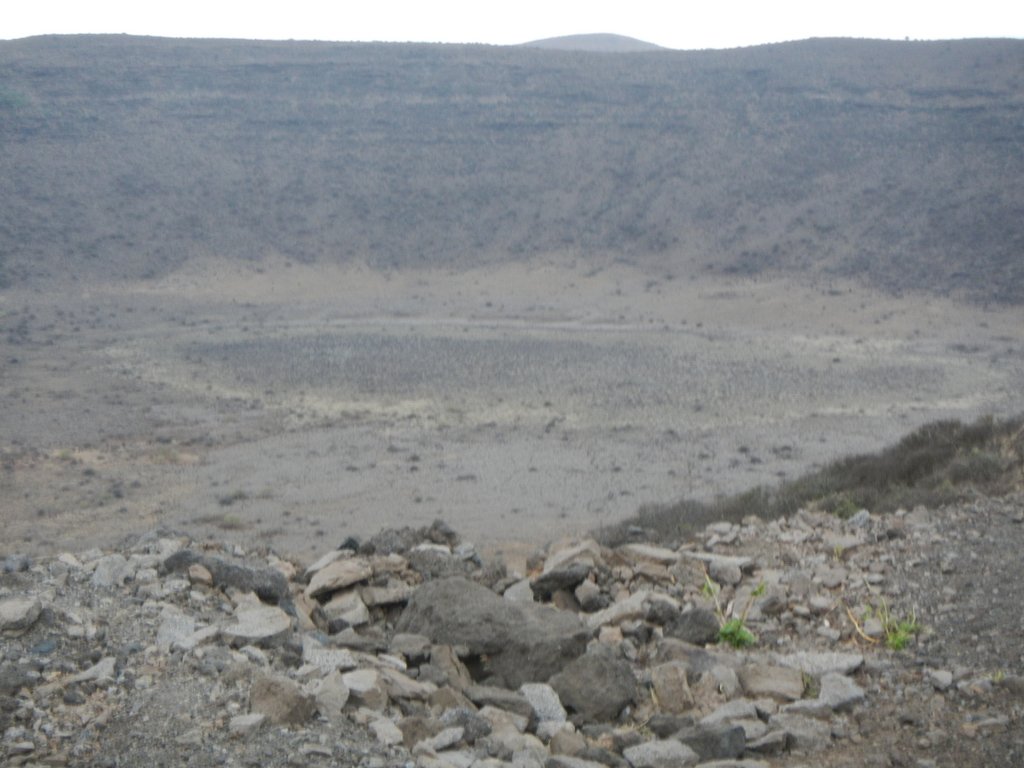 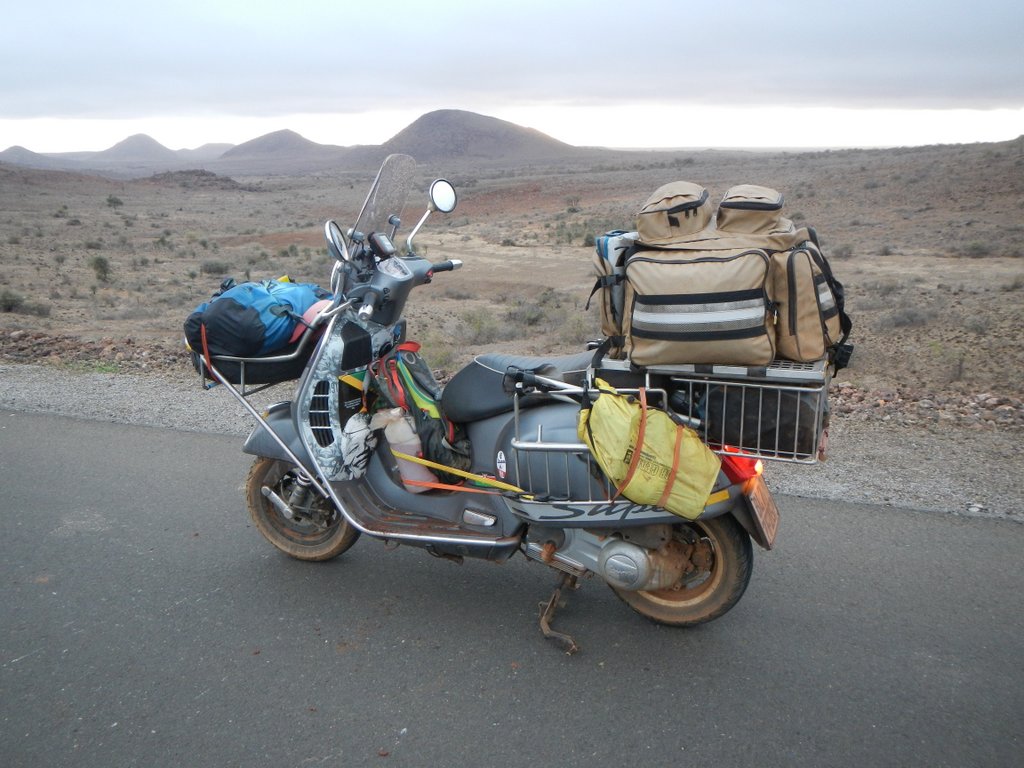 As we found our way out of the rain. 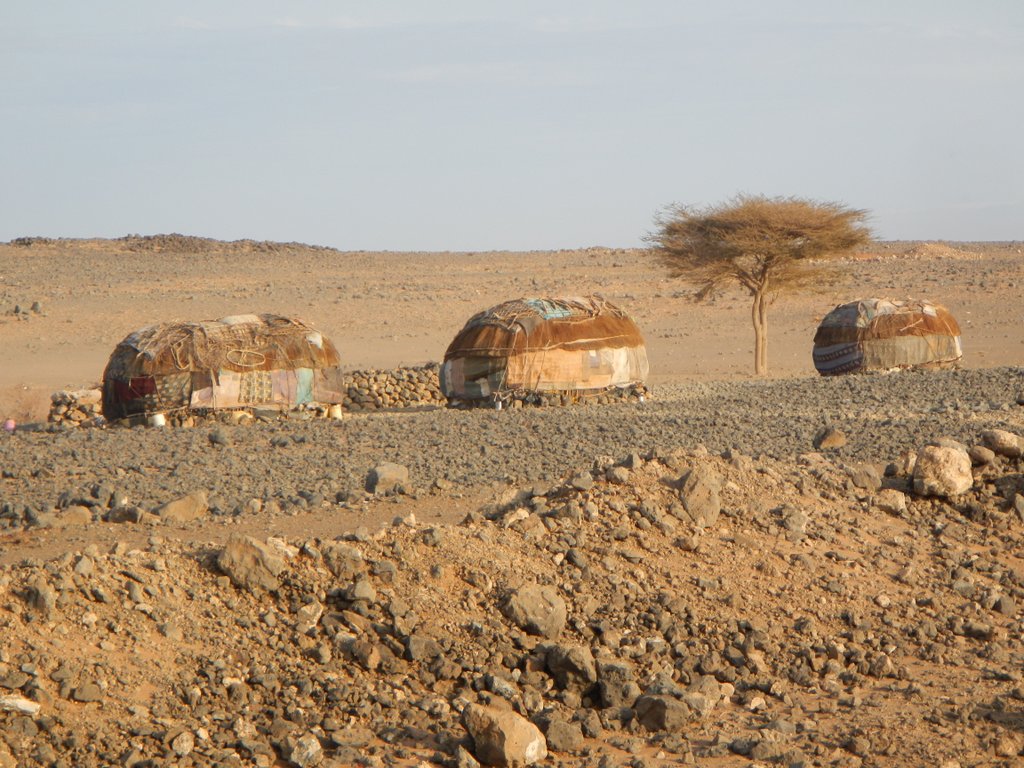 Harshness in the soft morning light . 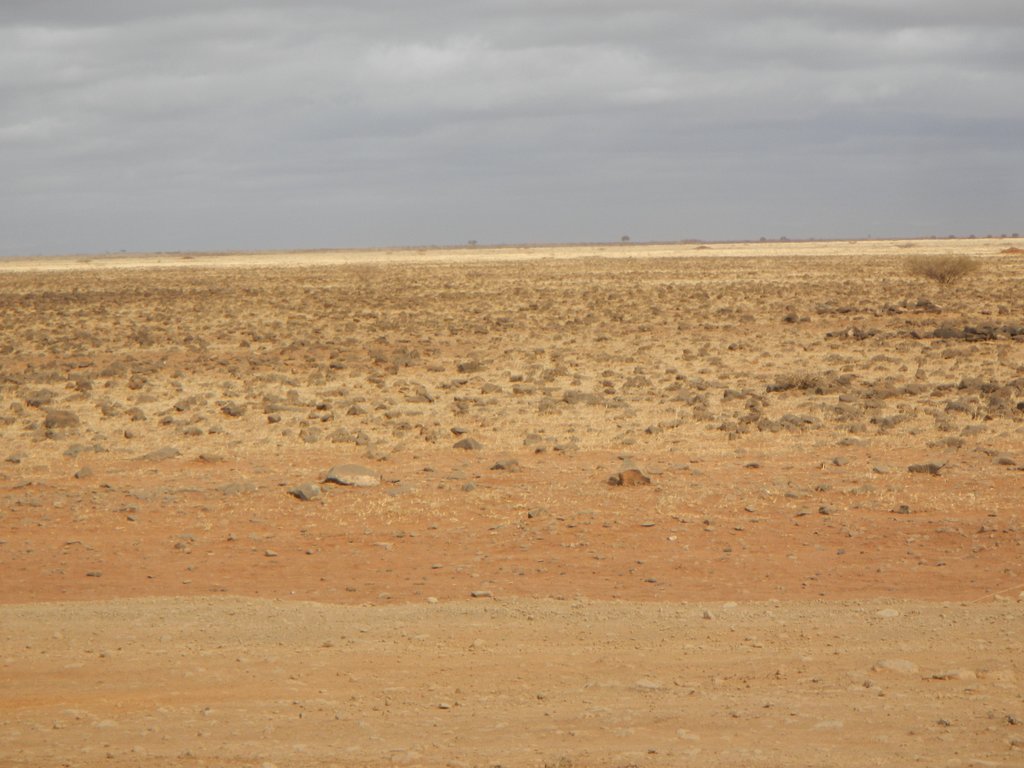 This goes on for ever.

The first 90 kilometres fantastic , then the road failed again and we slowed down dramatically , same old same old , 35 kilometres later all improved and the road was not nearly as bad as yesterday , I started to focus on the  surroundings and when I looked down , only 60 kilometres to Moyale and so they kept coming down. 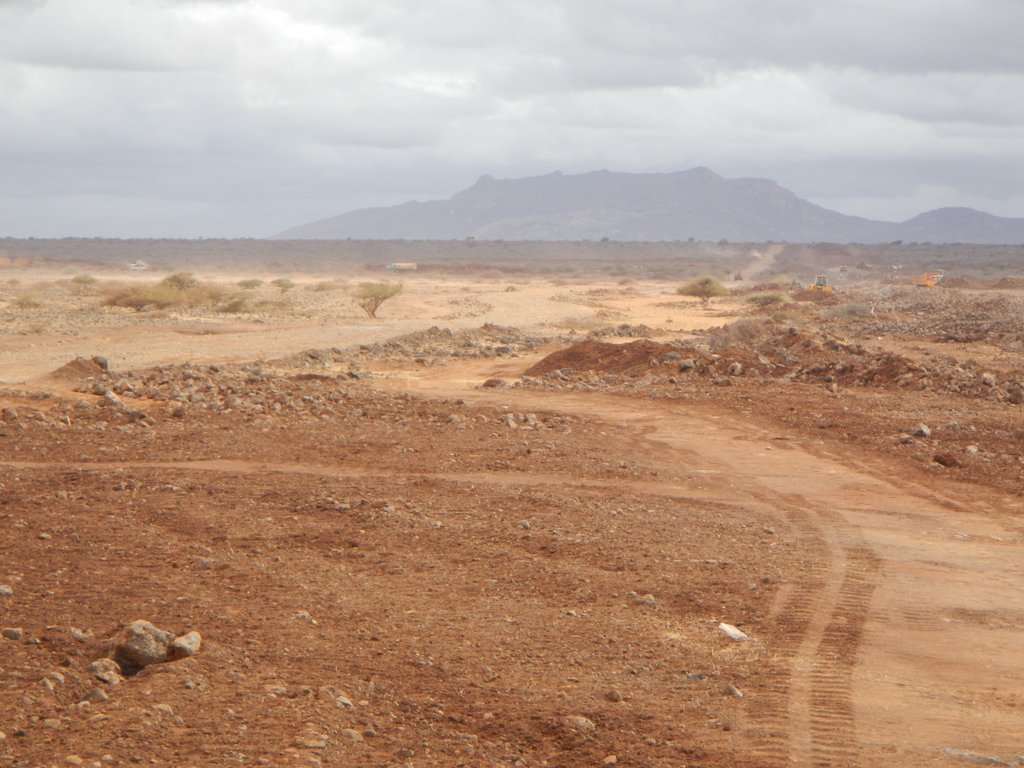 My world for a day. 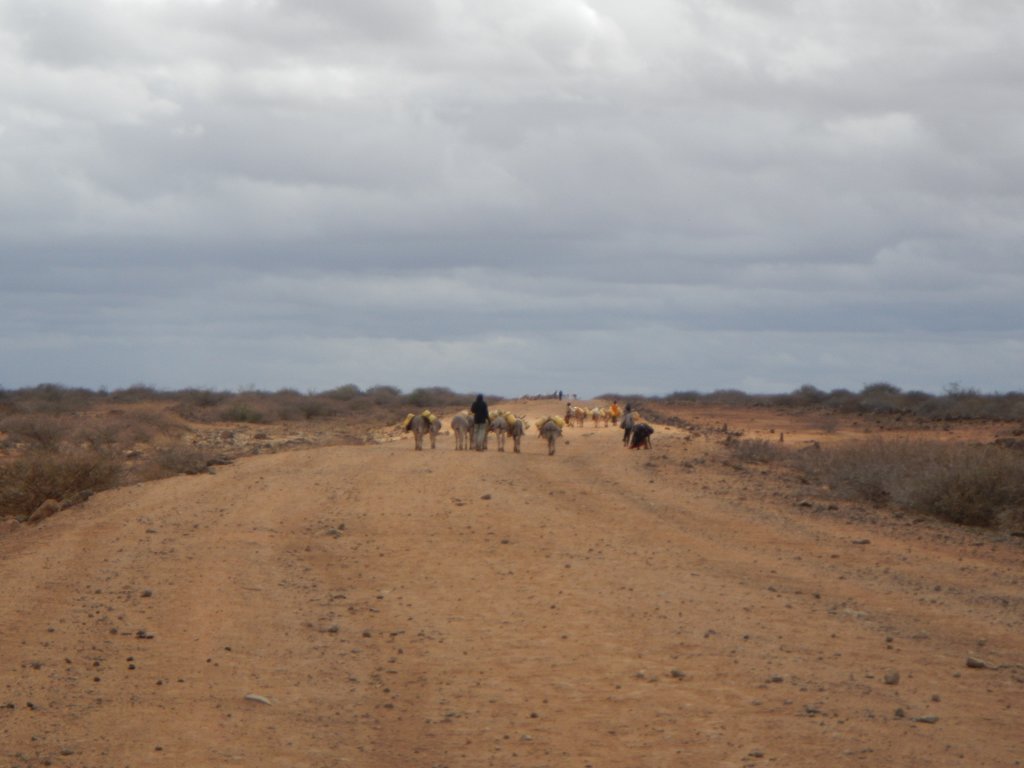 Their world , their life

The road got better , the distance shorter my spirits higher , we rode and rested , rode and rested , so time passed . I came across Marco all alone on his bicycle riding to Cape Town from Norway , did I feel silly for all my stress  and anxiety , keep on trucking Marco I will see you in the fairest on your arrival . 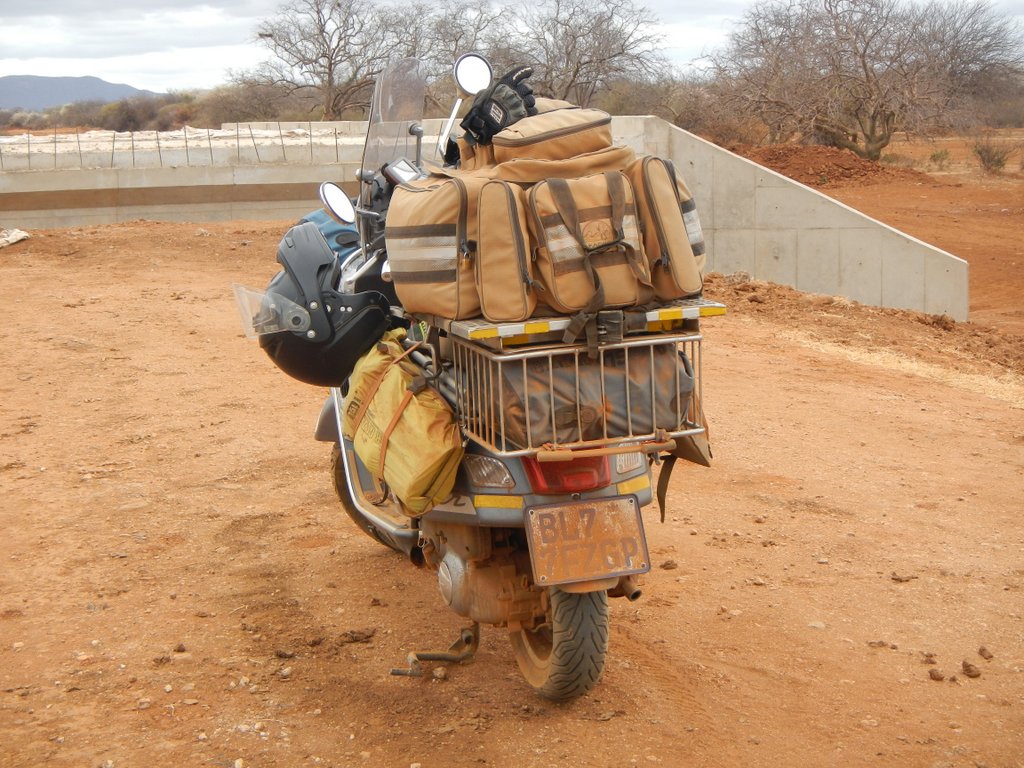 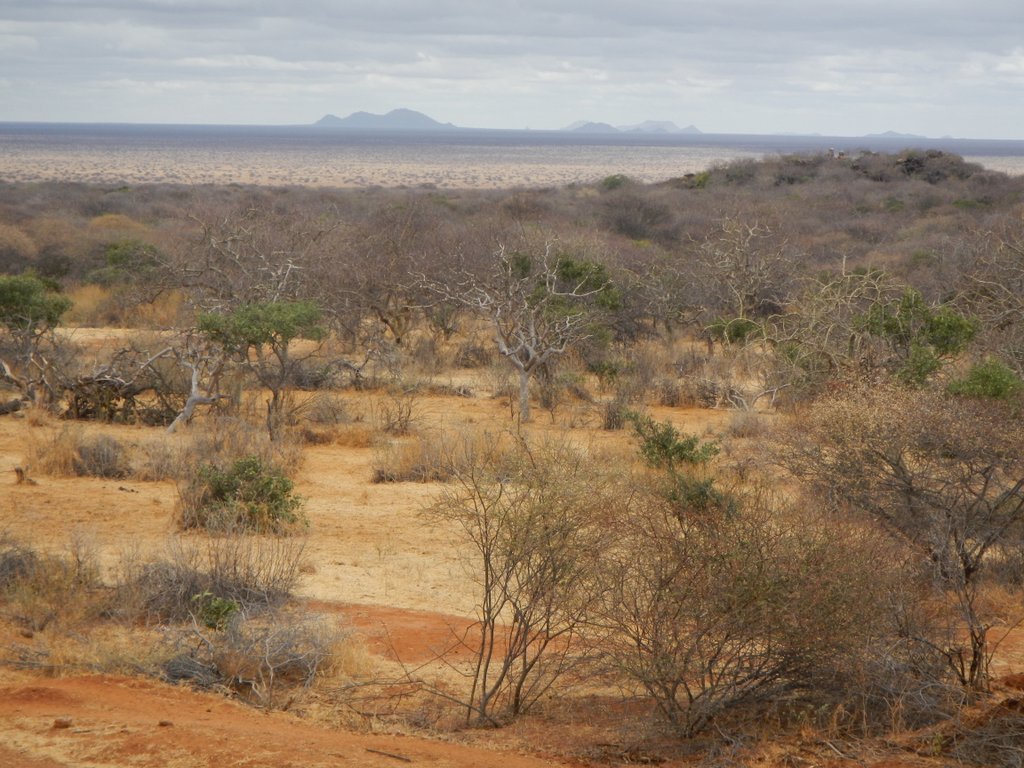 Then we arrived at the town limits , I just could not wipe the smile off my face , the glee , the euphoria , my heart was singing , we had done it and all that stress , worry and anxiety  took flight in the face of my excitement  , welcome to Moyale . 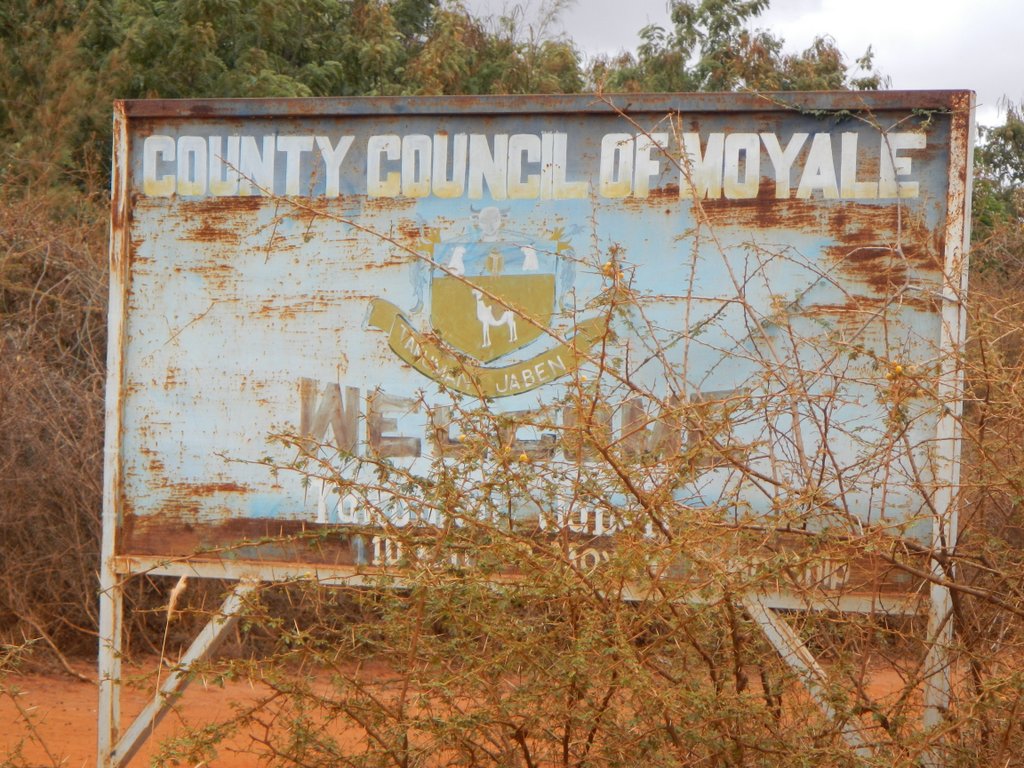 Best picture of the day. 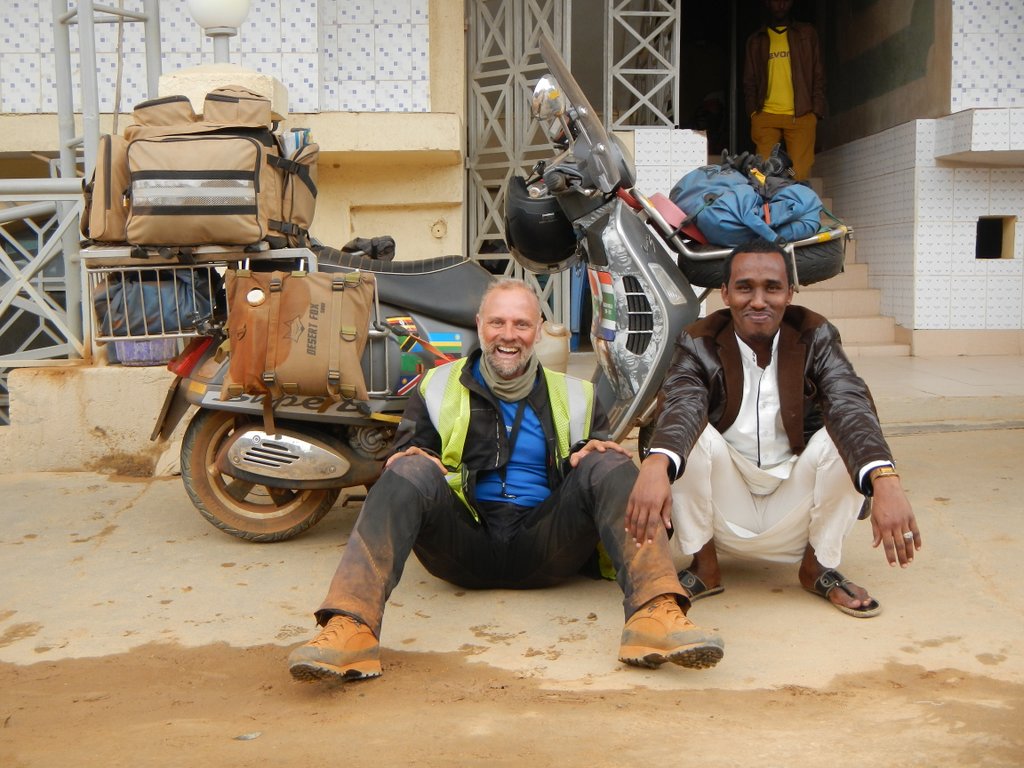 Ali who welcomes me to Moyale and the Al – Yusra Hotel

What a two days , what an incredible ride , it took me to a place I thought I would not get through and delivered  a sense of euphoria I cant explain . Well done Vic you are unstoppable .

Lake Manyara and lions in trees