Rider from the storm

The last couple of days have been those long and only satisfying after a hot shower days , spent on the road . The weather has changed dramatically from what I have been used to while riding cross country to and through Kenya.

The border crossing was fairly uneventful with the usual chats and laughs about crossing Africa on a scooter and a chance to hang out in offices with officials getting all my documentation done . Once I had changed some schillings for some schillings I was about to cross into cross into Kenya , I stopped for a security check of all documents , only to be told that the insurance that I had bought in Tanzania to cover all the countries I travel through was not valid , that this COMESA certificates  I had been issued , expired in December 2013 , so in actual fact I was riding with a “fake” certificate that had been replaced by the new certificate months ago . So off I went to try and sort it out , when I arrived at the office of the provider , I  burst out laughing , comparing this office to the one I had purchased my cover from in Tanzania , that required me to  walk through a shop and  then down an ally to be squeezed into a tight 2 chair half a desk office , I then realised  I had definitely paid and additional non refundable  toll to travel these beautiful roads . The official poster on the wall showing the old and new certificates displayed with pride . So I bought my new , new certificate , a couple of bananas and a Kenyan flag from a young boy , sat on the sidewalk , enjoying the sun and company from my usual scooter groupies.

Then off I rode , now legal I hope off into Kenya , this crossing was a dream , 8 minutes all done. Then the ride to Eldoret started , within a few kilometres I had to put on my Tanzanian road armour , those killer busses back , the trucks with the smell of fight from their burning brakes and abused mechanics . The road conditions varied from living in purgatory to heaven on earth , and all the while those menacing clouds hunting Vic and I .

We tried to out run the storm , the 300 cc no match for mother nature and the next couple of hours we shivered , shook and got discoloured by flying mud passing through every small town . Arriving in Eldoret was the worst , the roads a wash with red angry water trying to find a way out . Through the town it was about 20 kilometres to my over night stop , Naiberi overland resort . Only two obstacle’s keeping me from my hot shower , by now I was blue with cold and soaked like a white river rafter . The mud we navigated , the washed out river crossing  stopped us in our tracks , was I to take shoes and socks off and wade to check ? I should have , but I just lifted my legs and watched as Victoria’s front wheel left my sight , gave it full throttle and we made it , just .

Hot shower , hot  meal and then off to bed only to be woken by a group of drunk over landers , that found it difficult to walk and talk , never mind other activities attempted . So the night a long one , with a short sleep , up early to ride east to then ride North. 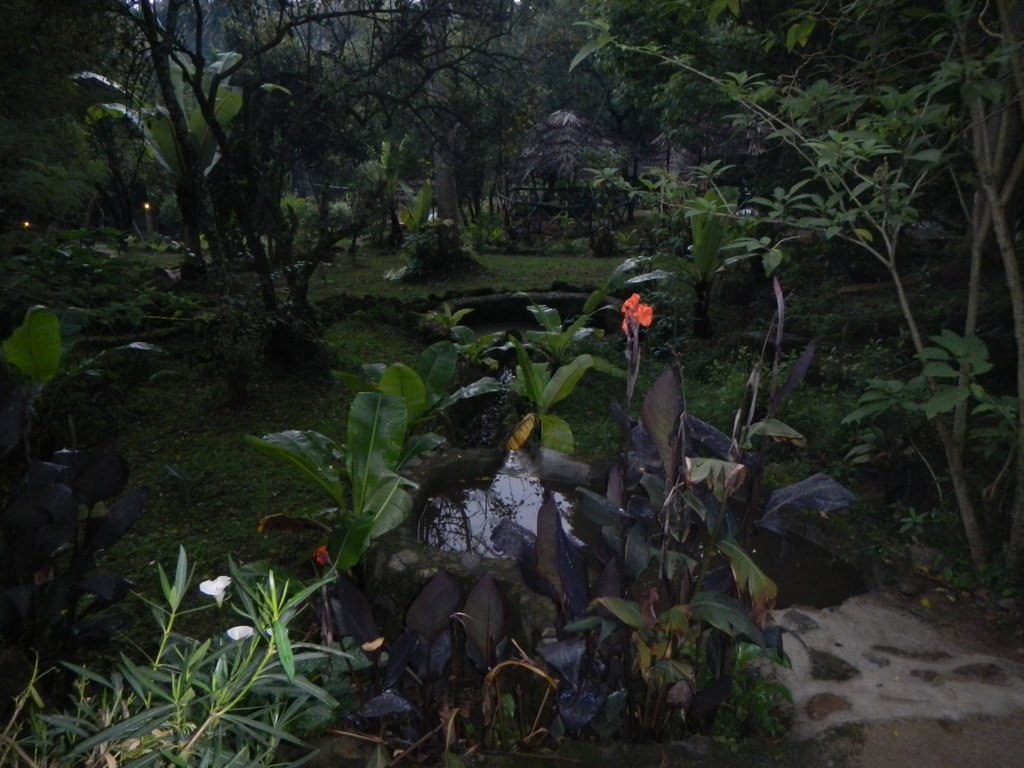 The ride long , beautiful and once again we could not outrun mother nature and her intermittent down pours , that said nothing more spectacular than riding the great Rift Valley on a Vespa , mother nature in agreement gave me dry times and sunsine to admire her in the right light. 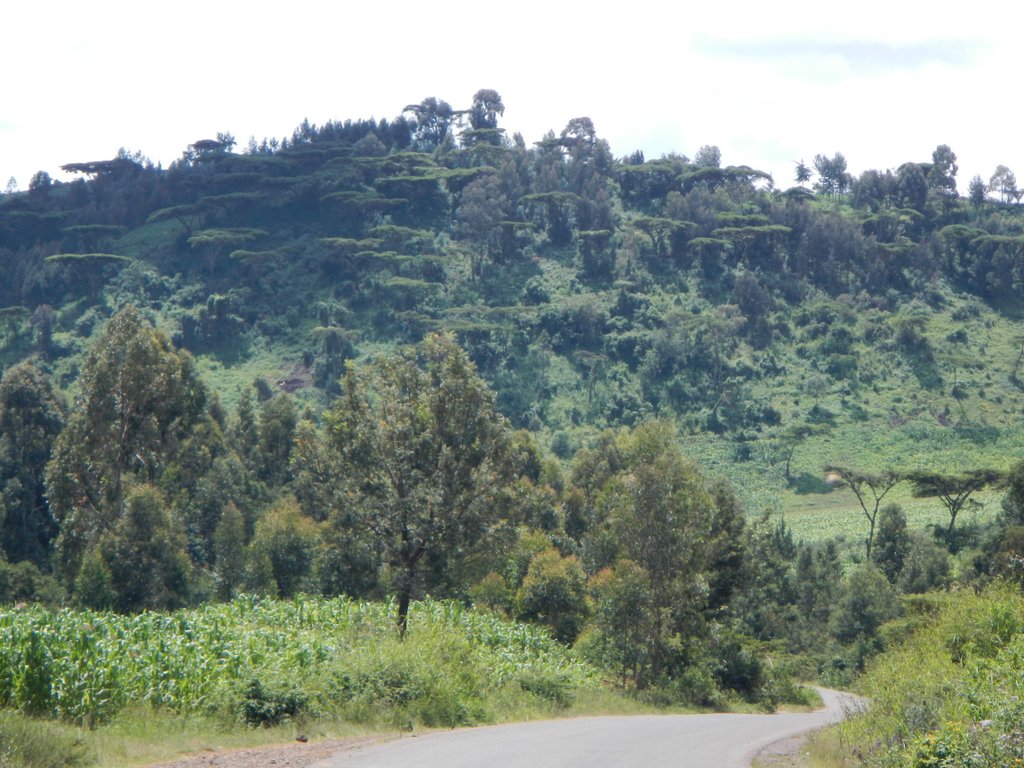 Great scenery , the price of it , the road. 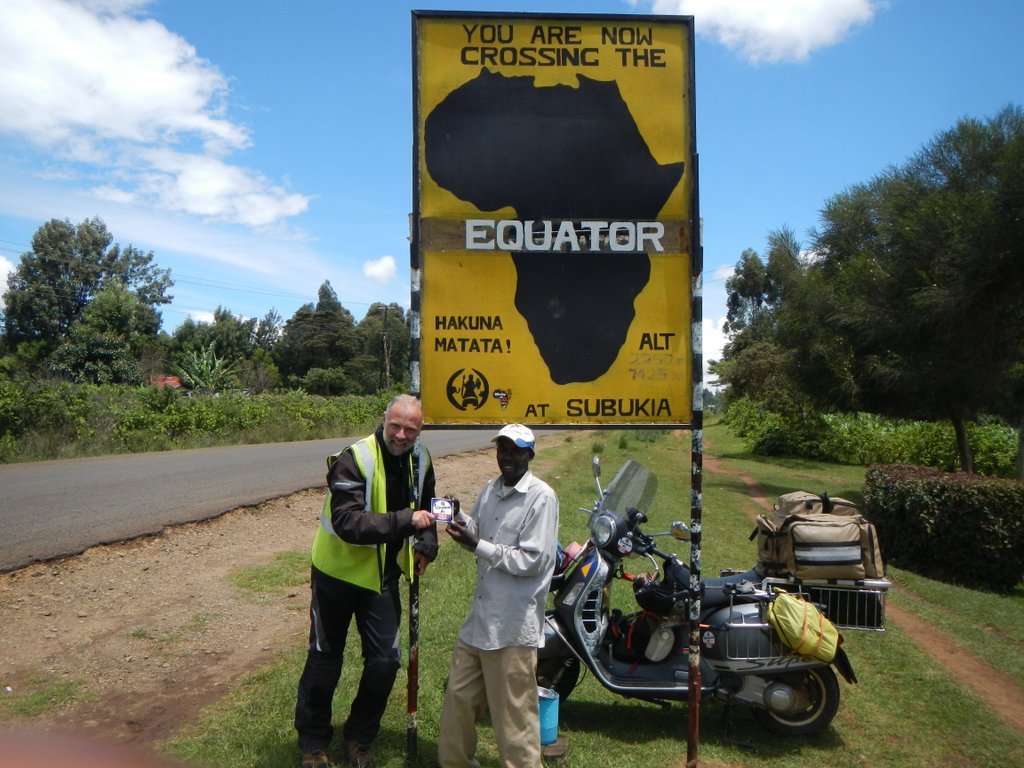 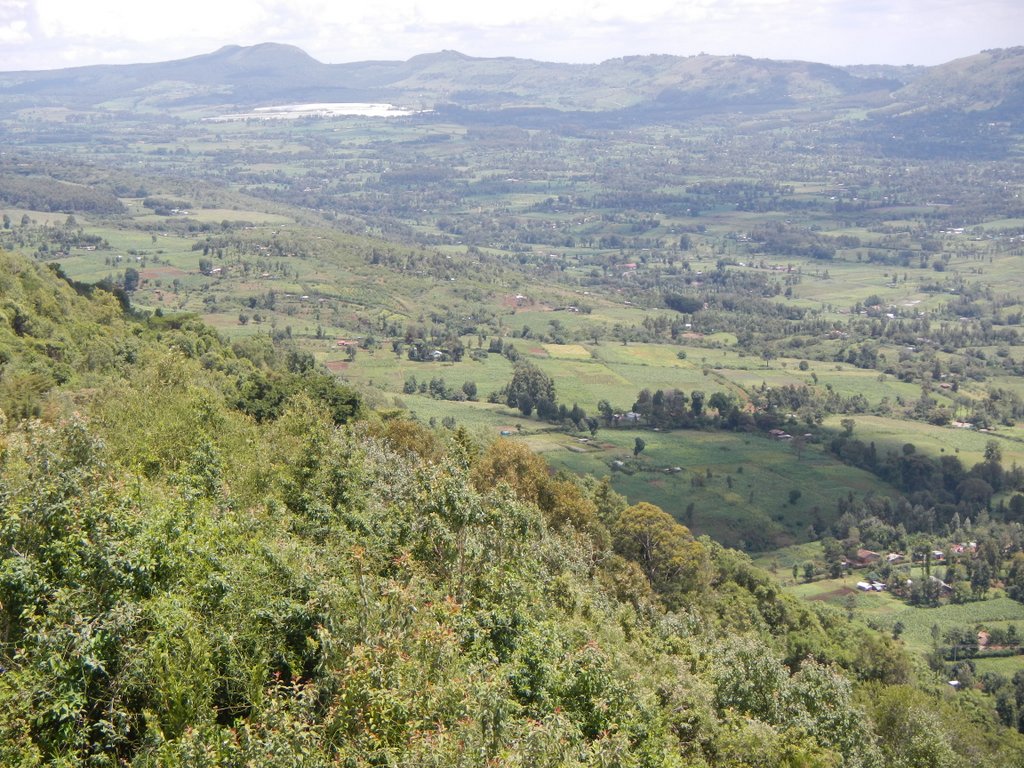 The unstoppable beauty of the valley. 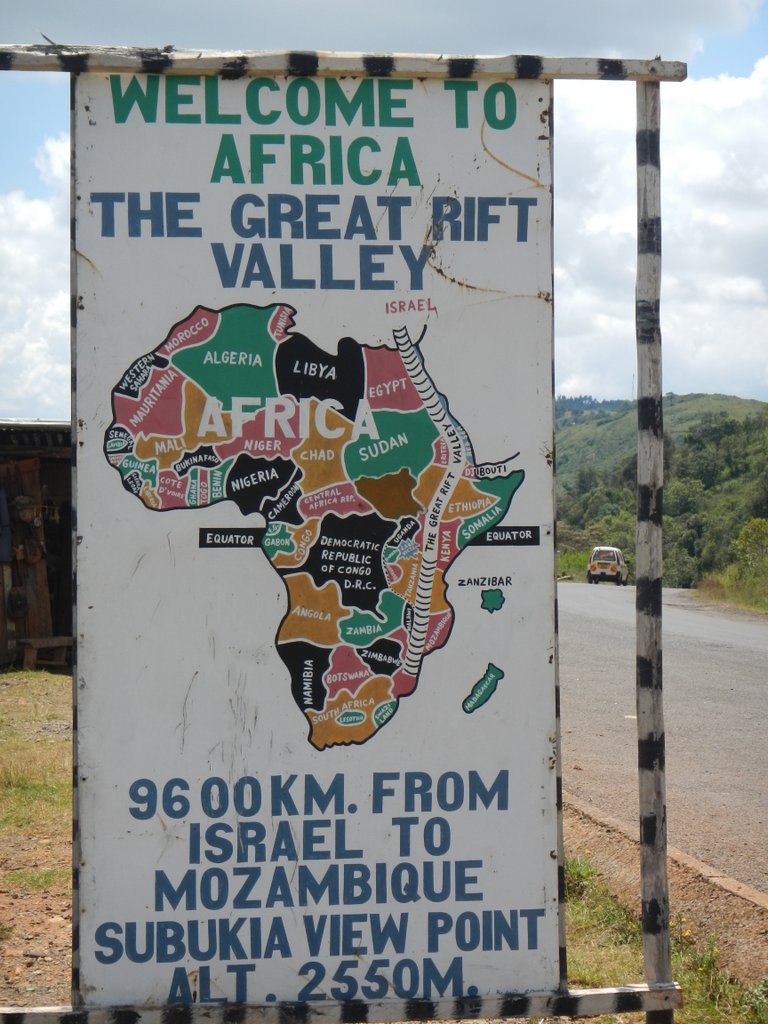 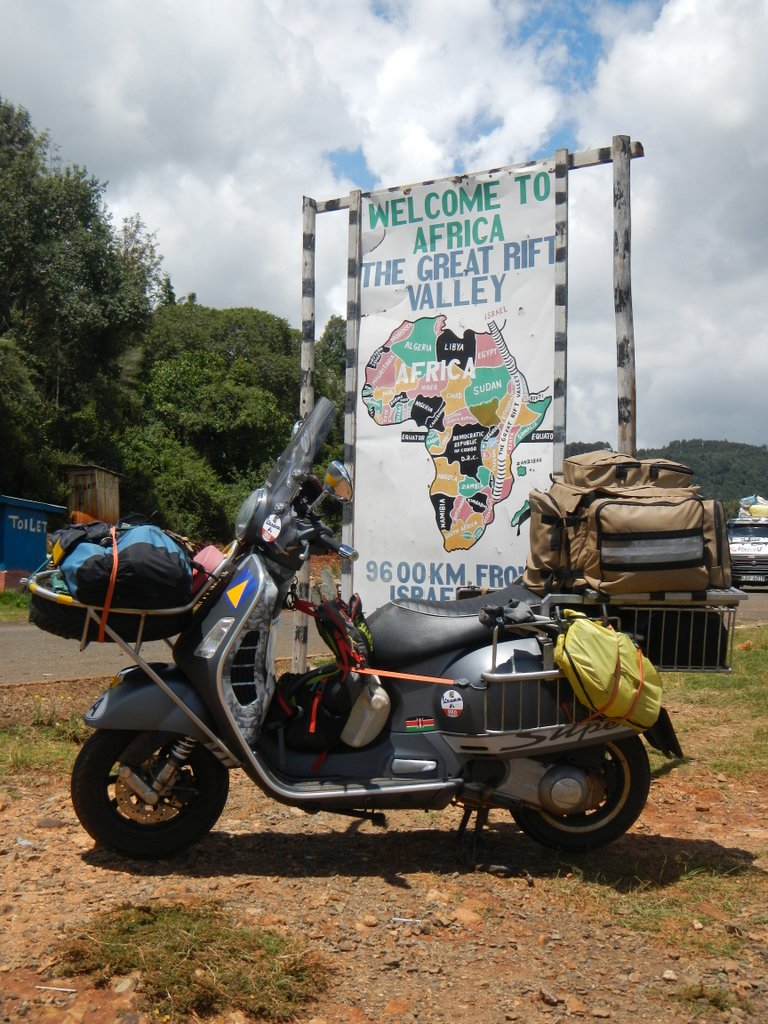 No Rift between Vic and I.

The Kenyan countryside today was very much like travelling through the Berg and riding up the escarpment  was just beautiful . My route took me through Nakuru for coffee , then Nyahururu to Nyeri my nights stop in a local hotel away from backpackers and overlanders to have a more local Kenyan offering and wonderful it has been . It was a real treat observing chic West Africa at work and play. 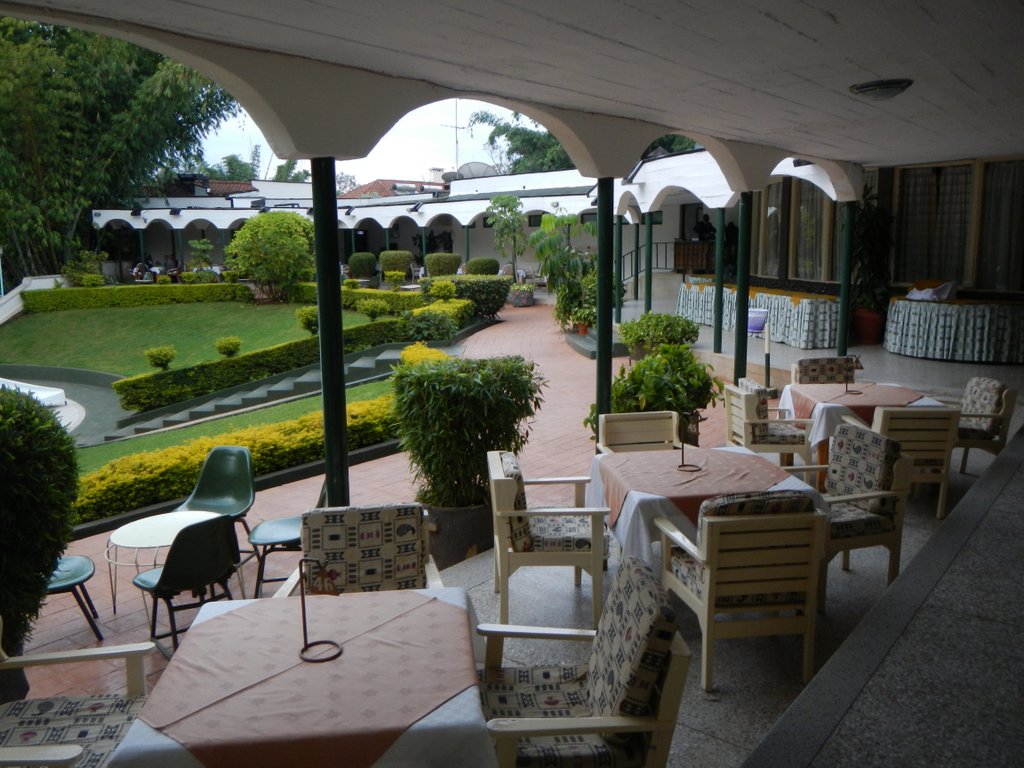 Patio to blog and have a bite.

I unpacked the whole scooter to try and get all my stuff dry by morning , shower , tea and a fillet that was not really a fillet and then off to bed .

The next three or four days of riding through the North of Kenya will  likely be the most telling and trying on both Victoria and I , so lets hope those wheels find a home every night before the dark . I will set off for Archers Post today , try and get to Marsabit the next and push for the border town of Moyale on the third day  before crossing into Ethiopia . I expect to be offline until Ethiopia so I will see you all on the other side of hell road .

The Falls full of wonder and Zambia smiles

The sun begins to set on Namibia