It was time to  move on again , the streets of Dahab even more disserted  than usual , the morning air cool , the sun still hiding behind some of the buildings , I packed the last few smalls onto Victoria . We rode out and into the Sinai , with the mountains on both sides , we were transported  in a tunnel of rock , sand and sky with the sun not high enough to penetrate , all around shrouded in cool grey  air . As the sun climbed so the light changed the landscape ,  the gaps in the range  allowed us to cast our shadow briefly into the desert . 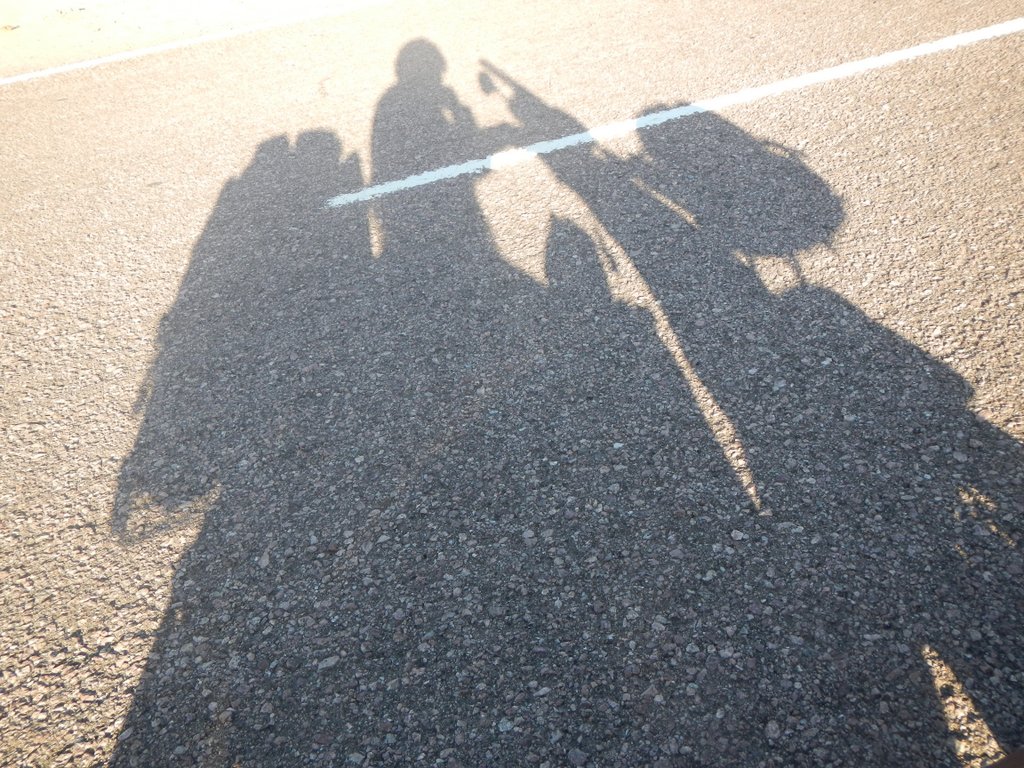 Early morning scootering on the Sinai felt incredibly special and I suppose with only just over a hundred kilometers left before crossing into Israel , I became even more aware of the beauty , for I did not have much time left here .The mountains turned cinnamon on pankake as the light ignited the colours . The blue of the sea started to dance in the flickering light , the coves like hidden sancturaries half covered in desert dusk , half the soft  light of  dawn , with the water providing the  serenity  . I rode in this  trance of calm and colour taking in as much as possible knowing that I was on borrowed beauty . 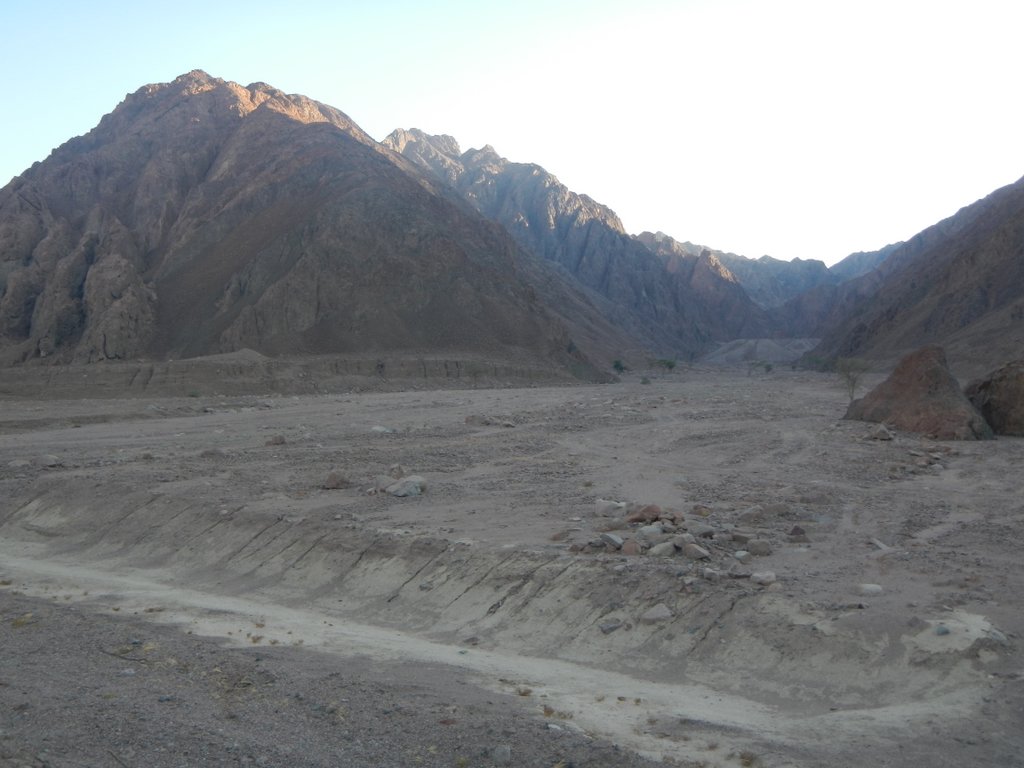 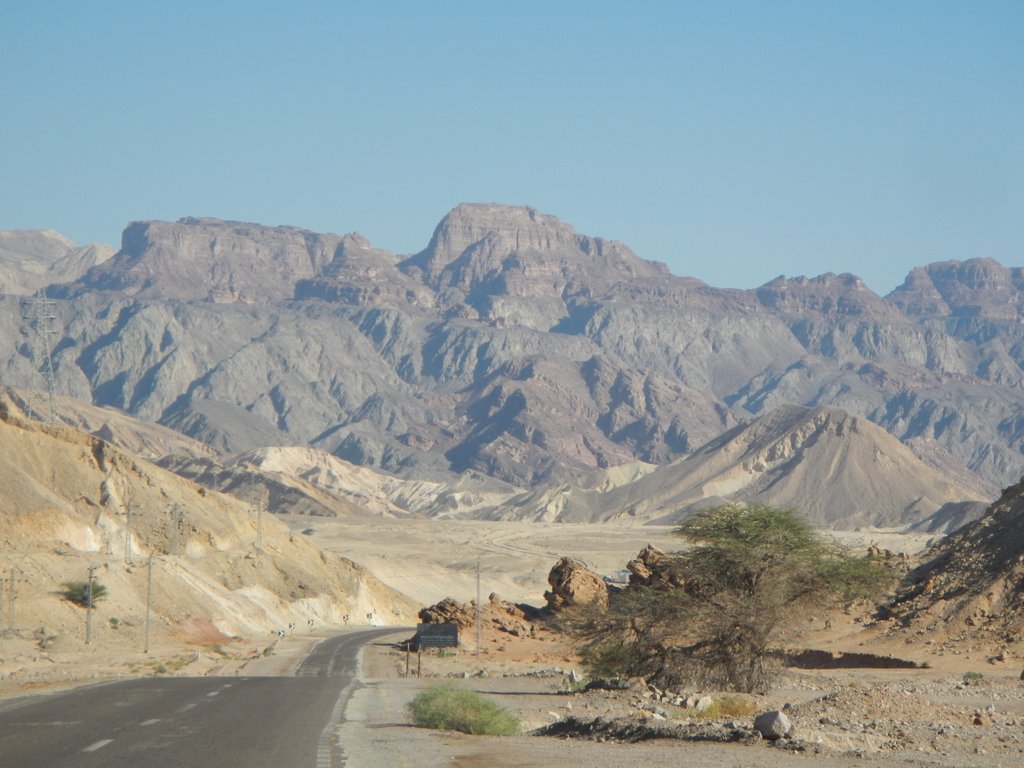 The ride up to Eilat 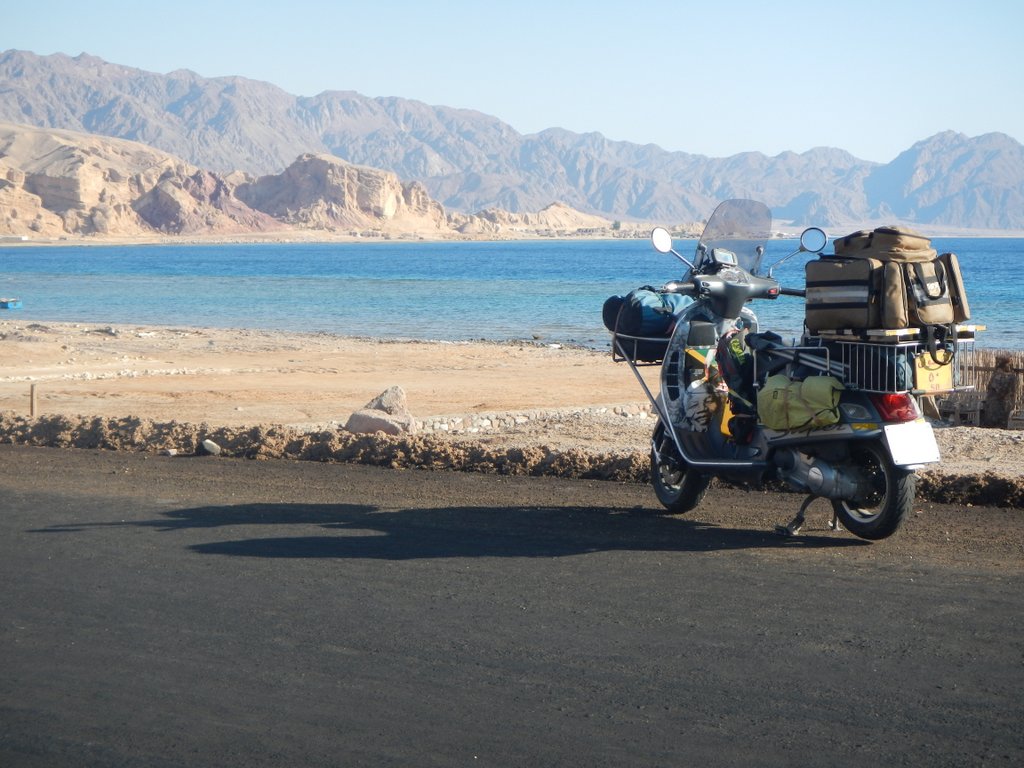 Pausing to take it all in .

I had left early knowing that this was to be a long day , I had heard about the border procedure at Taba so I was prepared for a long crossing . I arrived at the border  around nine in the morning and started the process of exiting  Egypt , which involved de registering Victoria and returning her foreign  plates , which would be sent back to Aswan to cover another traveller as he or she made their way  North . I then had to get immigration to stamp me out and the final leg to leaving , was to unpack the scooter and carry everything to an X ray machine inside the immigration bulding , then once cleared re pack and was waived out of Egypt.

You can feel and see the difference as you approach the Israeli border , the buildings modern and clean , the security impenetrable , the barrier large and looming . I jumped off Victoria passport in hand and was immediatly sent back to stand and wait at the scooter . I think Israeli borders are the only crossings in the world were beauty comes so well armed and dressed , her eyes smouldering , her features soft  and speech seductive  . It was the first time that I would have preferred to be having dinner with the border official than being questioned . That been said with GI Joe only meters from us I kept my answers short and sweet , thinking to myself I wonder if I should do an annual calendar of beauty at borders , would it rival  Pirelli ? So with the initial step done I was ushered along to start my entry into Israel .

The long , meticulous and very thorough  process started , The scooter inspected , I unpacked everything to have it  X rayed and then it was my turn to  clear immigration while Victoria was taken to be checked and cleared . It was to be a long process , I would finally arrive at my hotel in Eilat after 16h00 . At one point I thought there is no way I was getting in , this vagabond on a scooter arriving from the desert , I was bound to attract a little extra scrutiny  . The officials very professonal in every sense doing a very thorough job but at the same time polite ,  offering me conversation, coffee and hydration .

I had adopted a very relaxed approach to crossing countries from my very first border and it had served me well to date , every one had their procedure and what I had come to realise was , it would be followed irrespective, so no point in allowing frustration to ruin your day . So I waited and eventualy I was cleared to enter what a relief it was , I had my moments of panic thinking what I would do if I was sent back to Egypt , doing all that paperwork again , but with passport cleared and stickered ,  Victoria and I rode into Eilat . 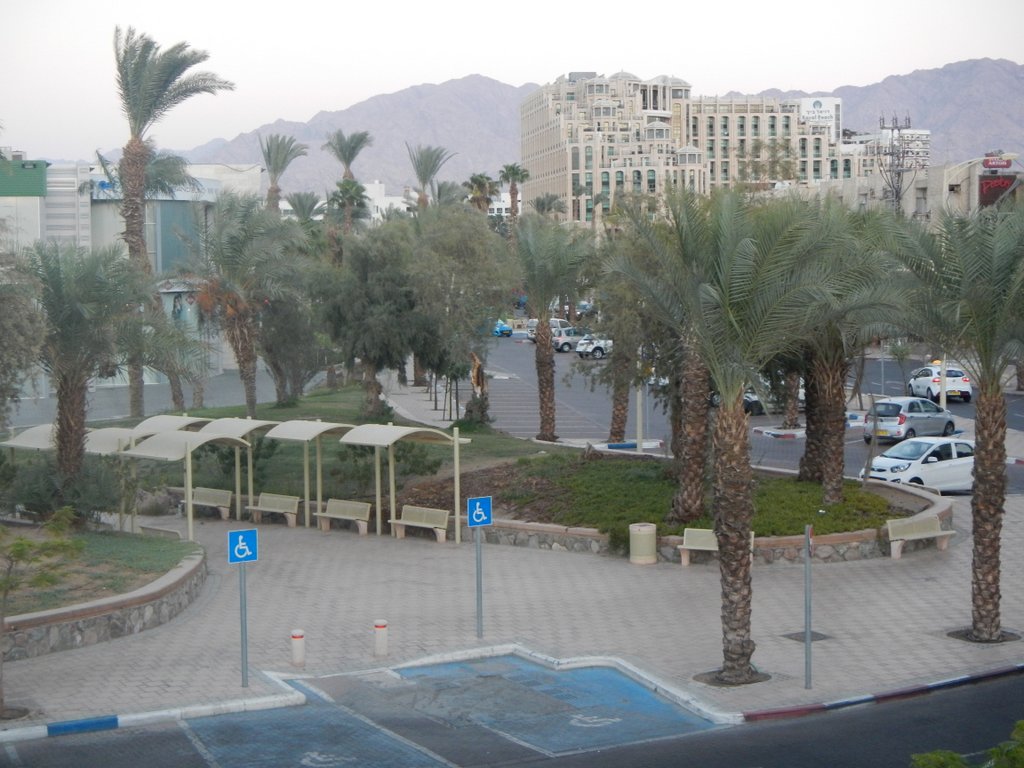 I booked into my hotel exhausted from a long day , unpaked Victoria for the third time in less that 12 hours , took a long and welcomed  shower and then it was  off to enjoy people , prams and a bustling promenade wide and pristine . Eilat has a wonderful holiday feeling , with families out and about , dad trying to catch junior before his gelato goes flying , mothers praming  along burdened by only having two hands yet so many balls in the air , this place felt so different , safe and secure with a freedom I had not felt in people for a while . 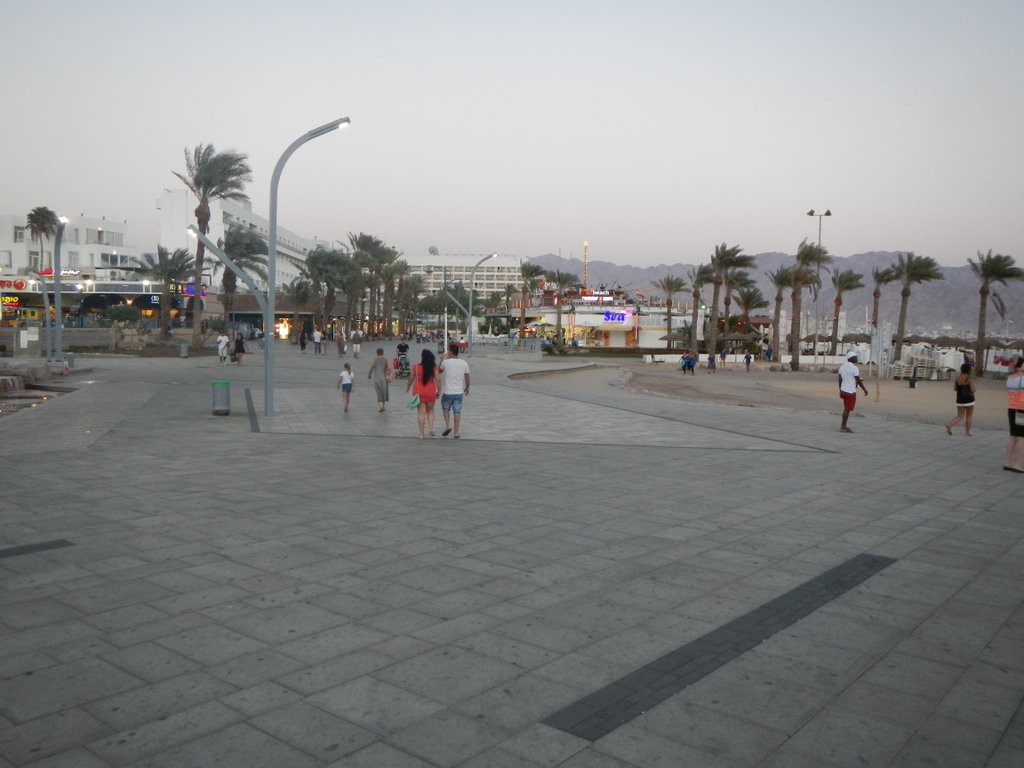 The promenade just before the night life transforms it.

Was Eilat the promised land , a place that the burka has traded places with the bikini , a place that seems to champion individuality and freedom to express , sushi , sashimi , steak and gastronomic choice anxiety ,  welcome to Europe surrounded by sand . The mall a sensory overload with so much on offer , lights , camera , action , my head spun , my eyes rolled around in my head like that of a  cartoon character , just so many people , so much movement , glitz and glamour , all too much for this desert fox , so after sushi it was back to the hotel to find sanctuary .

I took a shower and stood looking out of the window at this Red Sea Vegas , realising with a heavy heart Africa was gone , I was in a brave new world , lacking the skill to acclimatise this fast , I was still filled with the stars of Africa to light my way . Neon not yet please ! 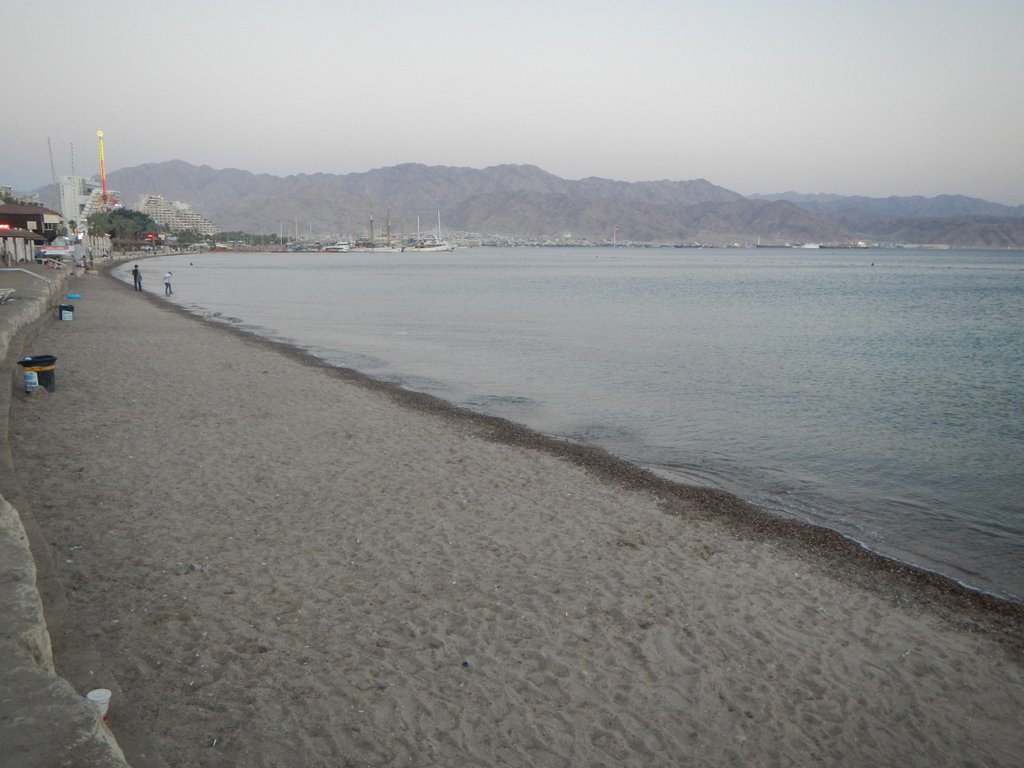 The beach at dusk . 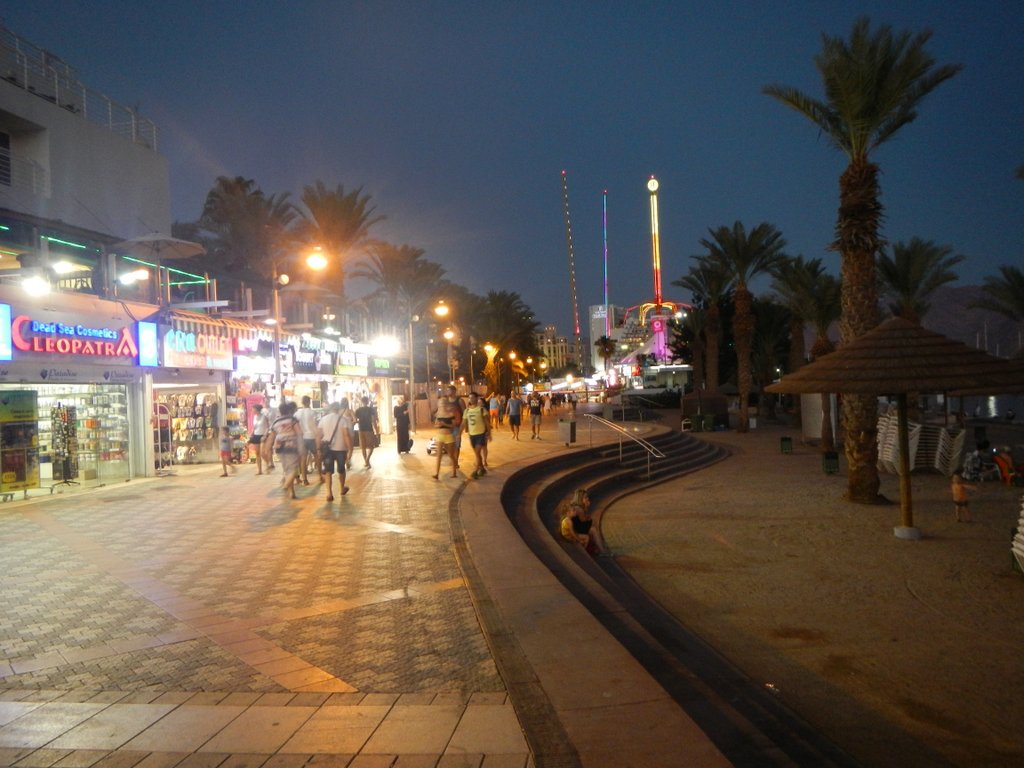 In the morning we would leave for Jerusalem , meet David in Beer Sheva and ride together into the city . It was to be the first time since leaving Johannesburg that I would not be solo on a scooter and that Victoria would be in the company of another Vespa. Wow !

I lay in bed images of Africa rolling on retina , then sleep came , covered me in a dense fog before transporting me back to dream in the desert.

Soaking up The Sudan