After a lazy start and a breakfast that would make Marie Antoinette blush I followed the signs towards Beer Sheva en route to the city of Jerusalem. 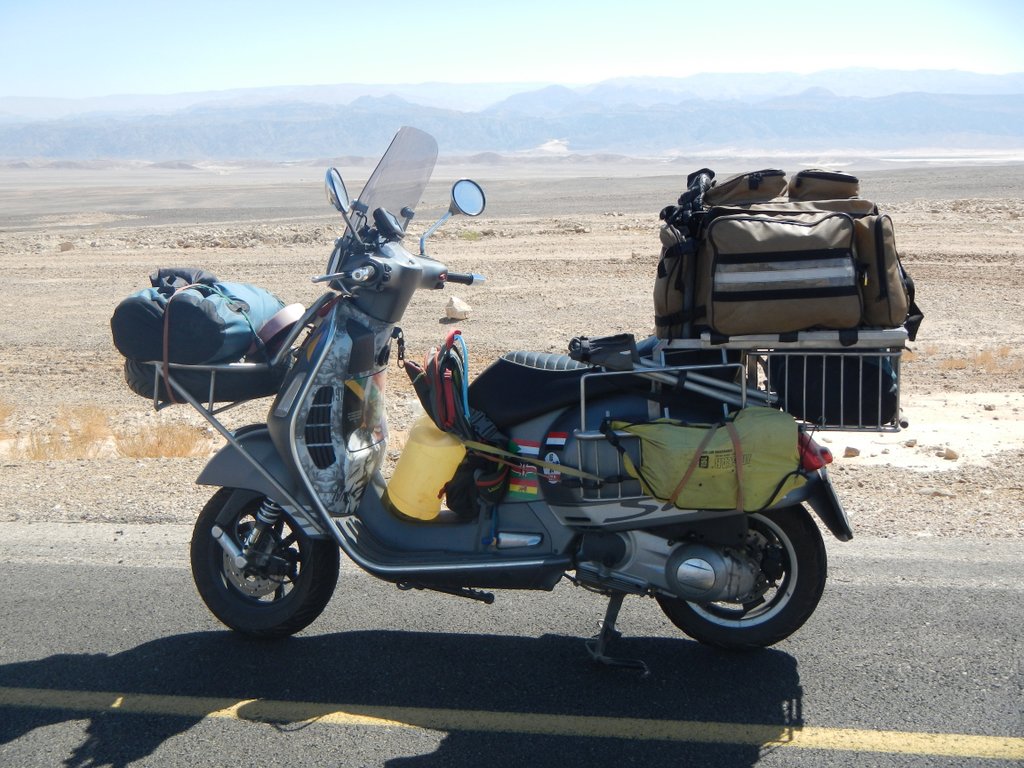 The ride up through the Negev desert was a warm welcome to Israel , the drivers cautious , using signals not passing on blind rises ,  not cutting into quickly or passing on solid lines , is this why it is called the promised land? The beauty aside the ride up from Eilat to Beer Sheva is nothing short of breathtaking especially as you make your way up through the passes to the higher plateau . 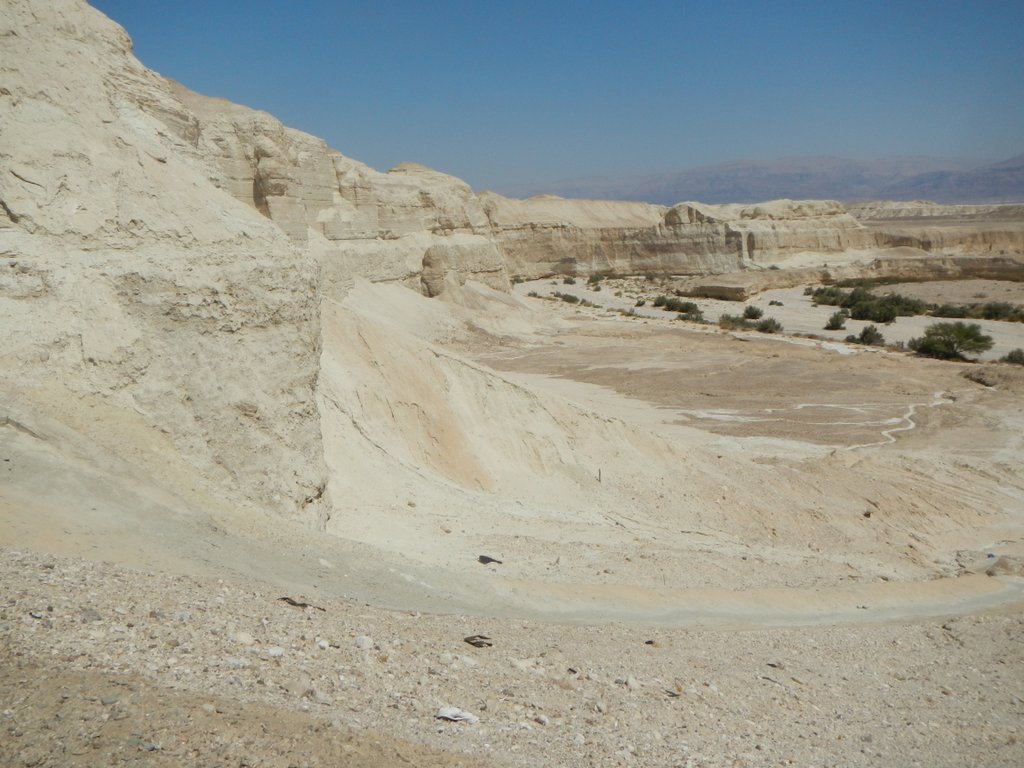 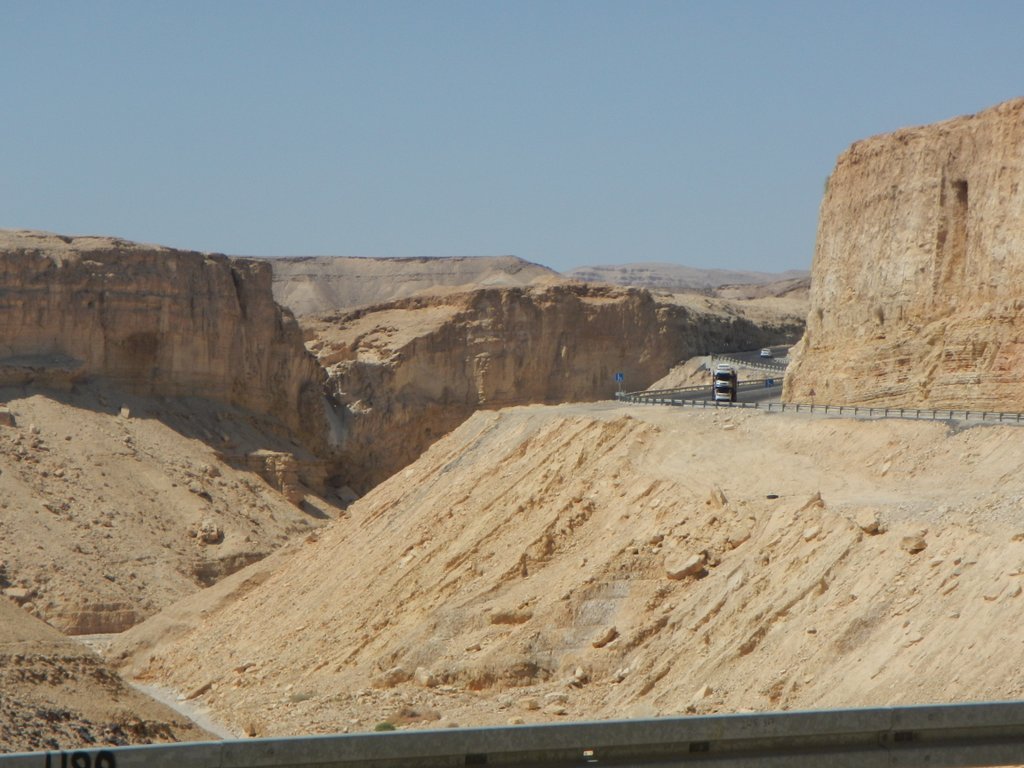 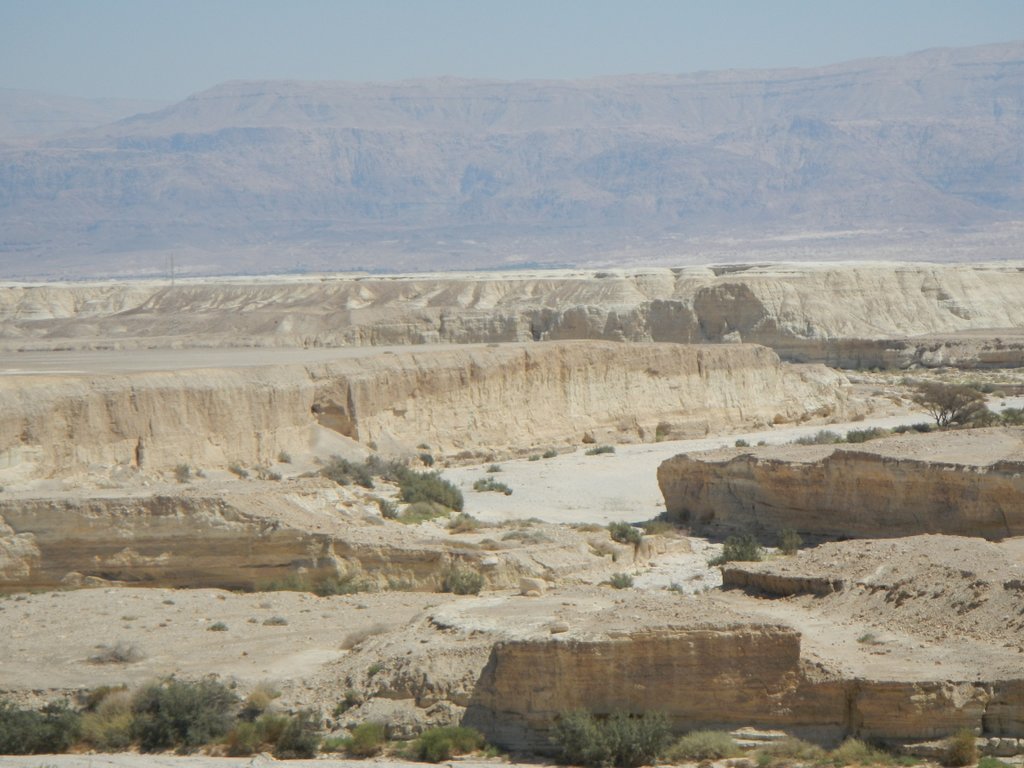 There is something about desert sand.

The roads good , fuel prices that shock but the ride was fast and smooth . I called David on arriving at the biggest mall I could find and he directed me to our rendezvous point , two Vespa riders meeting for a afternoon run , on scooters of course . I always say how my trip has been made so special and incredible by the people I meet and this was to be no exception , I was to be the adopted family member and honoury Jerusalema resident , thanks to the Bogner’s . A bit of background , David had come across my ride through the modern Vespa forum and had offered me the option of his parents apartment in the city or to stay with him and his family while in Jerusalem . Being on the road all the time , these offers are so appreciated and grabbed with both hands once offered , So I was to meet my good  Samaritan and we rode tandem into the city .

David found me easily , not that I am hard to miss and we rode straight for Jerusalem and to meet his scooter surgeon Nir who was to give Victoria the once over , and fortuitously so . Nir has a masters in precision , with a hospital like workshop , hoist lift , tools and surgical gloves . With  tools and pedigree in hand so he set to task . He gently rolled  Victoria on to his operations lift  to begin the pre op . I had laughter all over my face as I recalled some of the conditions that Vic and I found ourselves in while undergoing maintenance through Africa , very hard to reconcile the different working conditions . 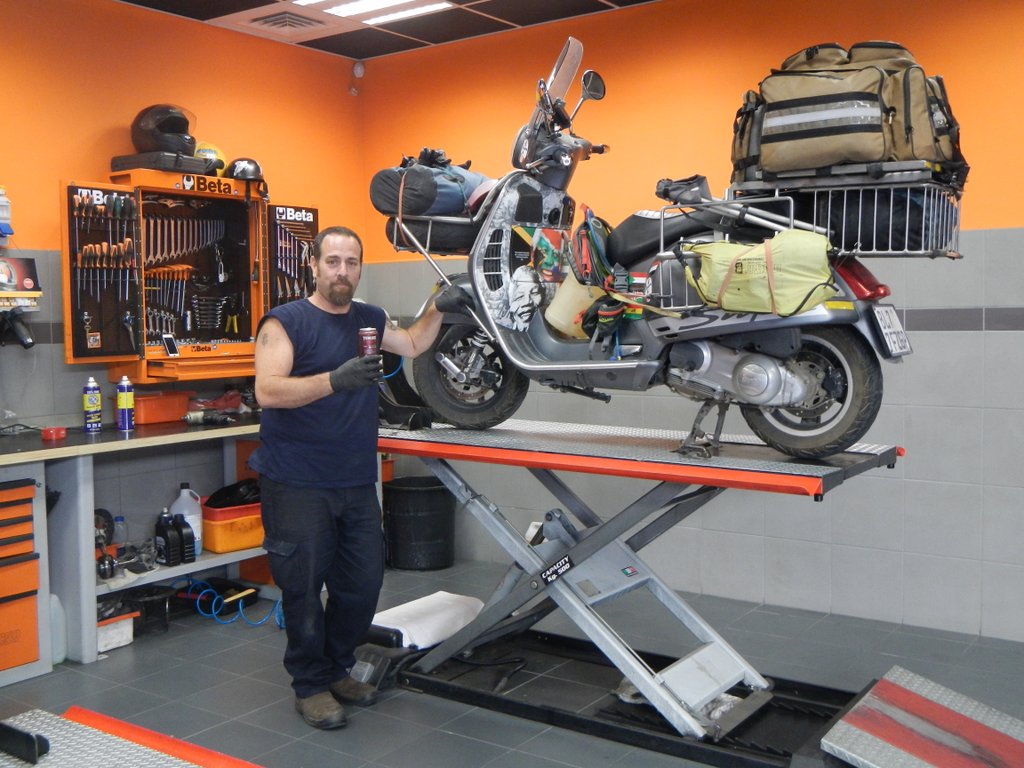 Victoria in the promised land.

All seemed fine until we stripped the transmission to check the belt , at the last service under my supervision mind you , one of the rollers had been put in the wrong way round , so the metal casing had been worn almost through , very lucky to have made it this far and to have the spare part on hand . Other than that we changed the belt , the oil and cleaned out the filter , just routine love I call it .Victoria caused quite a stir at the workshop which I have become fairly accustomed to , yet it is good to be reminded on occasion that this Vespa literally crossed Africa , so vast yet here we are alive and well, she is truly amazing .  What usually took three hours to complete  was done in less than one  and David and I set off for the apartment . 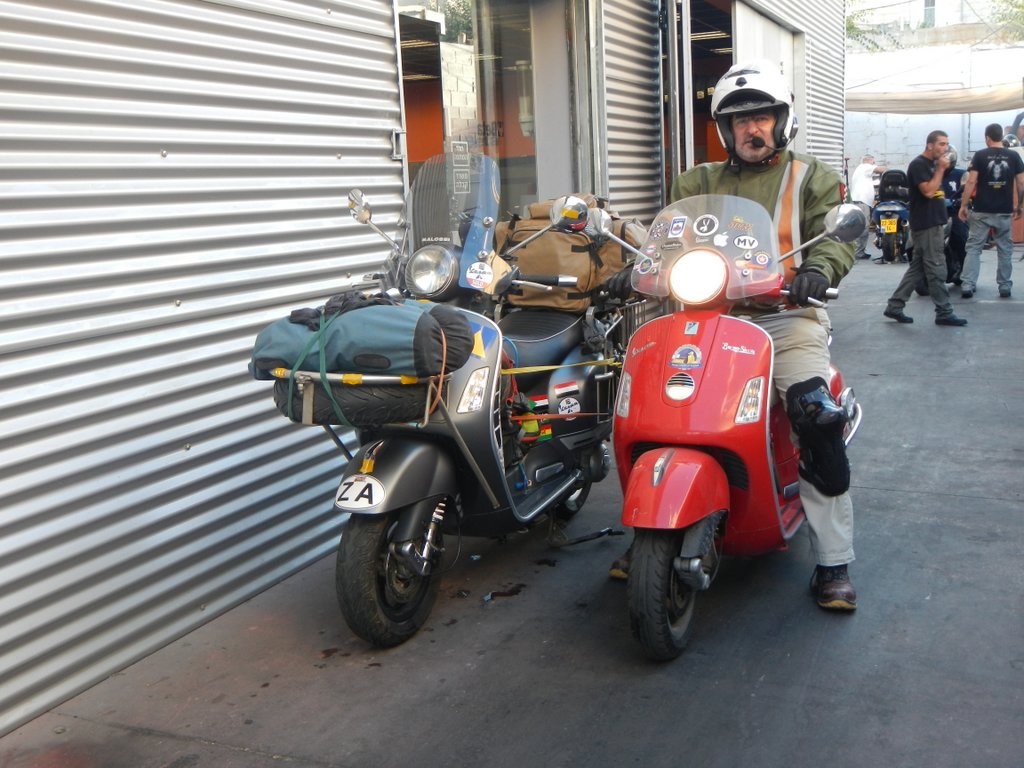 Jerusalem  glows with a gentle golden hue at dusk and dawn as the sun sets the lime stone a smoulder , something that words fail to describe but your eyes are forever thankful to have witnessed , Jerusalem the warm , the kind , the gentle that is how it felt as I followed David and his yet to be named Vespa into town , my eyes taking in the twinkle , my excitement growing as I arrived in this spiritual  city that has seen civilisation in all its forms ,the stories this place could tell ,  buildings representing the various  religions stand tall and in such close proximity they all blur , to smudge the lines that for centuries held the divide  , what was I to discover while here?

As I walked into the apartment and felt that space my spirits lifted , David helped me offload Victoria , settled me in and then treated me to an entrecote , done to perfection . With flavours running amok across my taste buds , steak and wine made  for a fantastic accompaniment to meeting a brand new friend  . So was my introduction to Jerusalem.

David had taken time off work to show me around his city , so as we said our goodnights we made plans for our tour of the old city in the morning . As luck would have it I had arrived in Jerusalem just days before the Jewish new year Rosh hashanna and what was going to make the experience even more special was that I was going to spend it in the company of David and his family at their home  just a short  scoot  from Jerusalem. 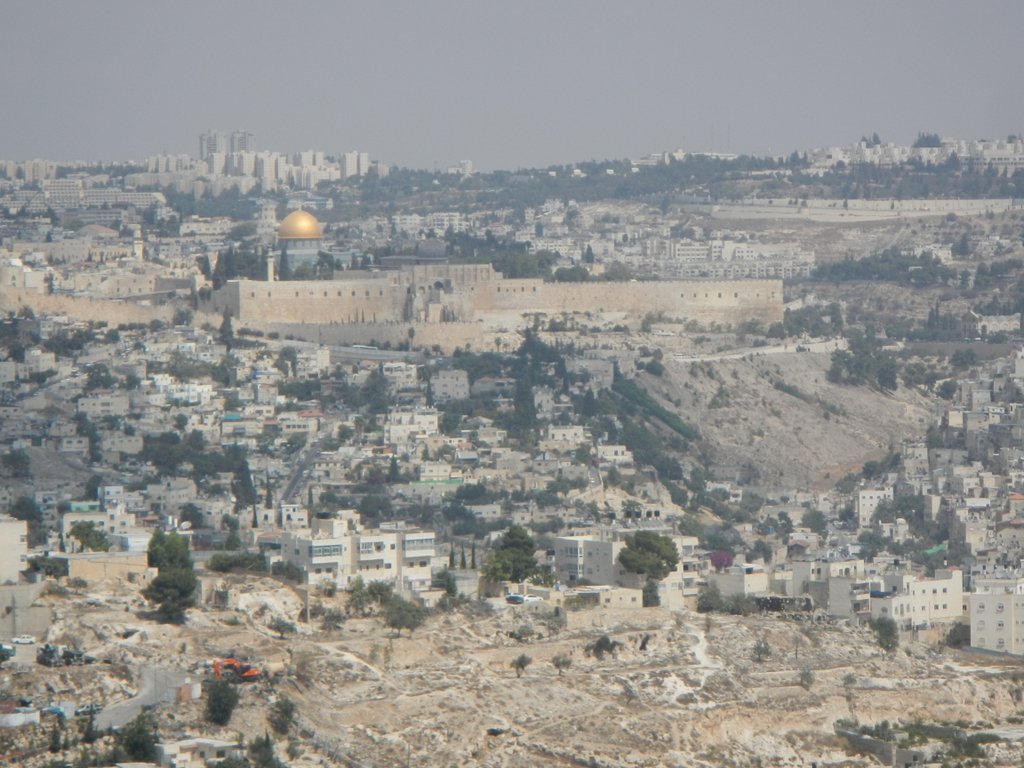 Jerusalem was going to be a very poignant and important stop for me and one that  unbeknown to me was going to be a place that would allow me to distil some of Africa , rest , reflect and get some kind of understanding and clarity on what had been my life for the last months .

First thing in the morning it was down to the bakery across the road from the apartment for cappuccino and a pastry selection to stop you in your tracks , I ordered and sat overlooking the street that was now a buzz with activity. I sipped my coffee and sat in silence immersed in this city life. 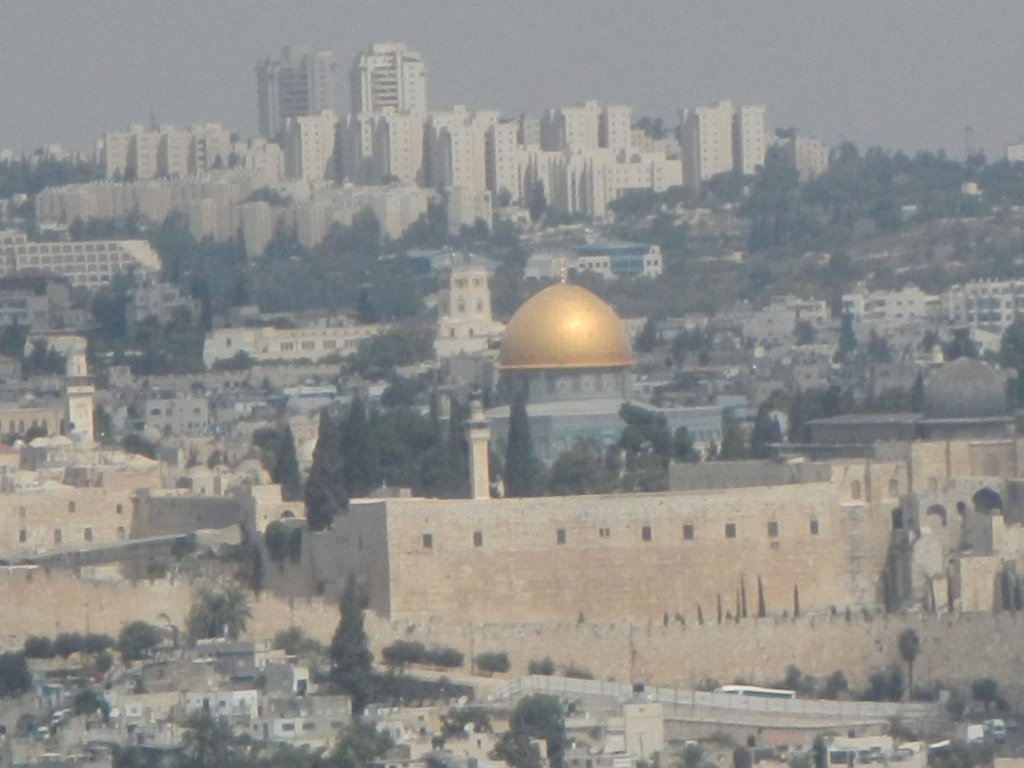 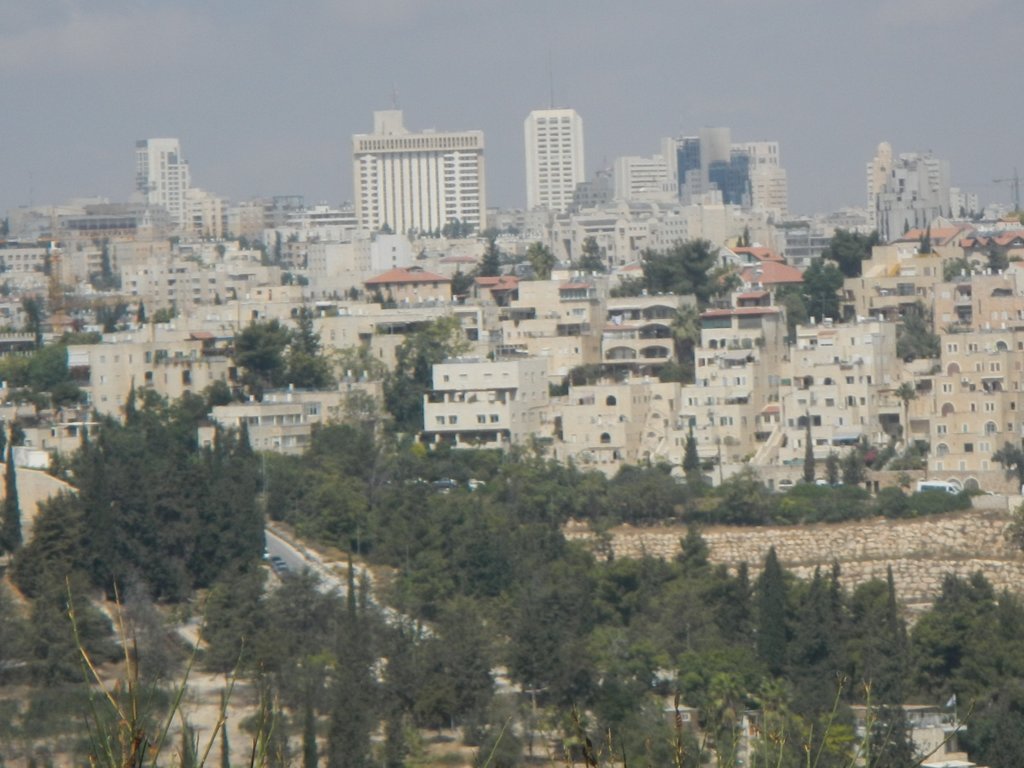 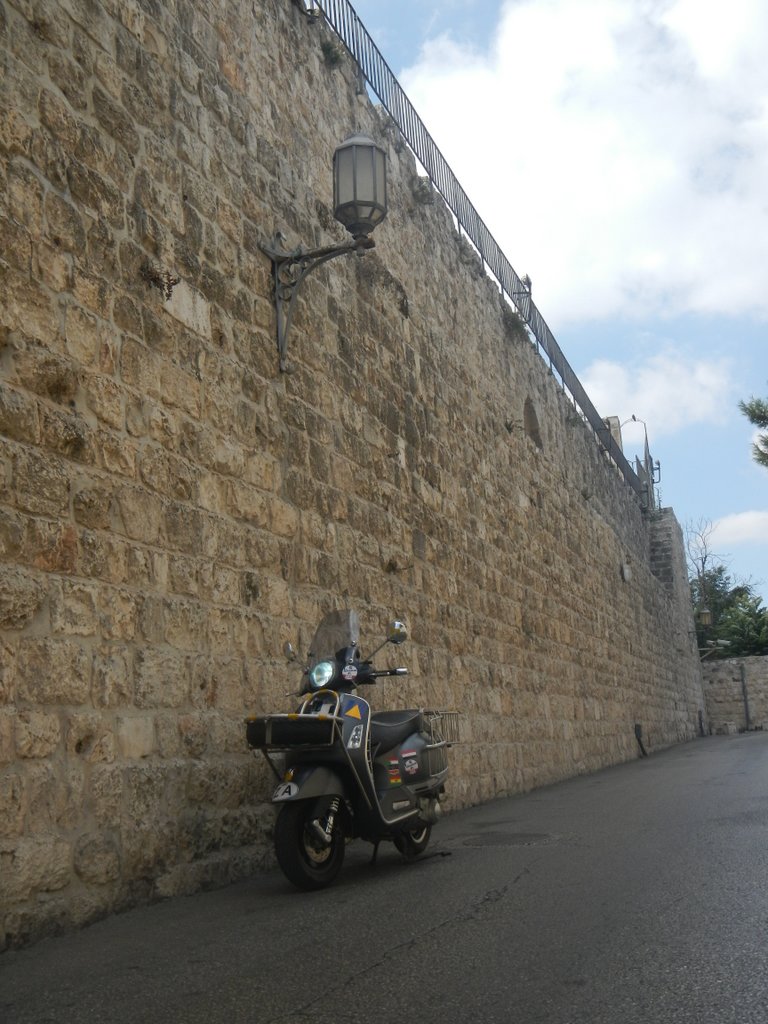 Victoria in the Old City . 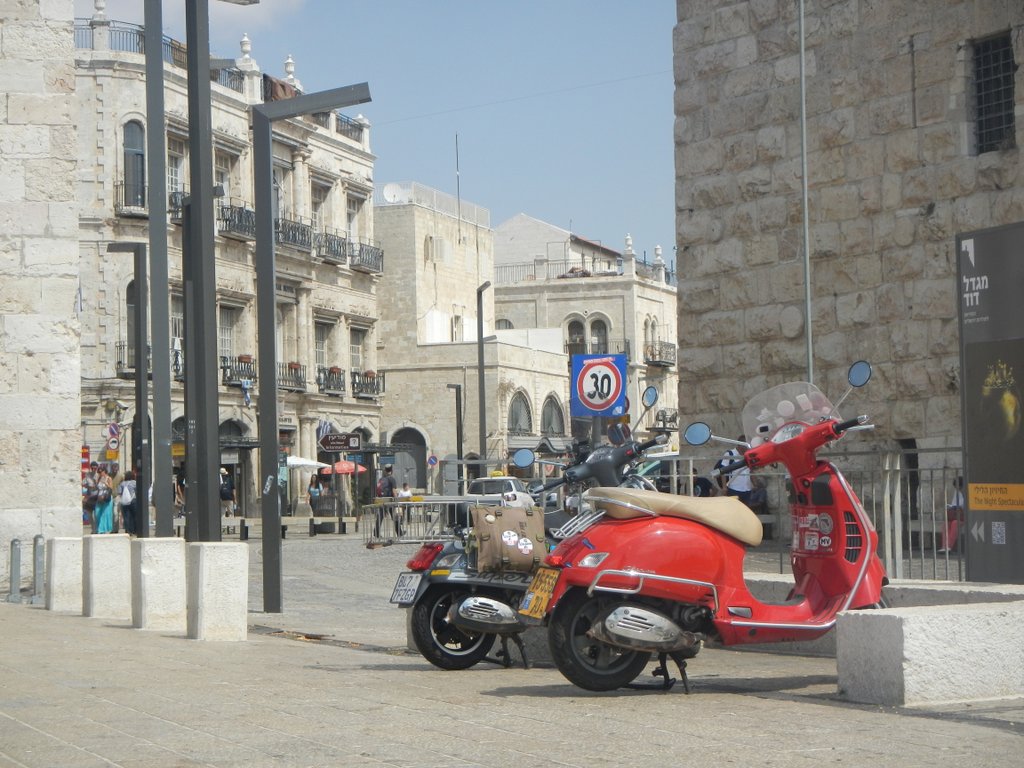 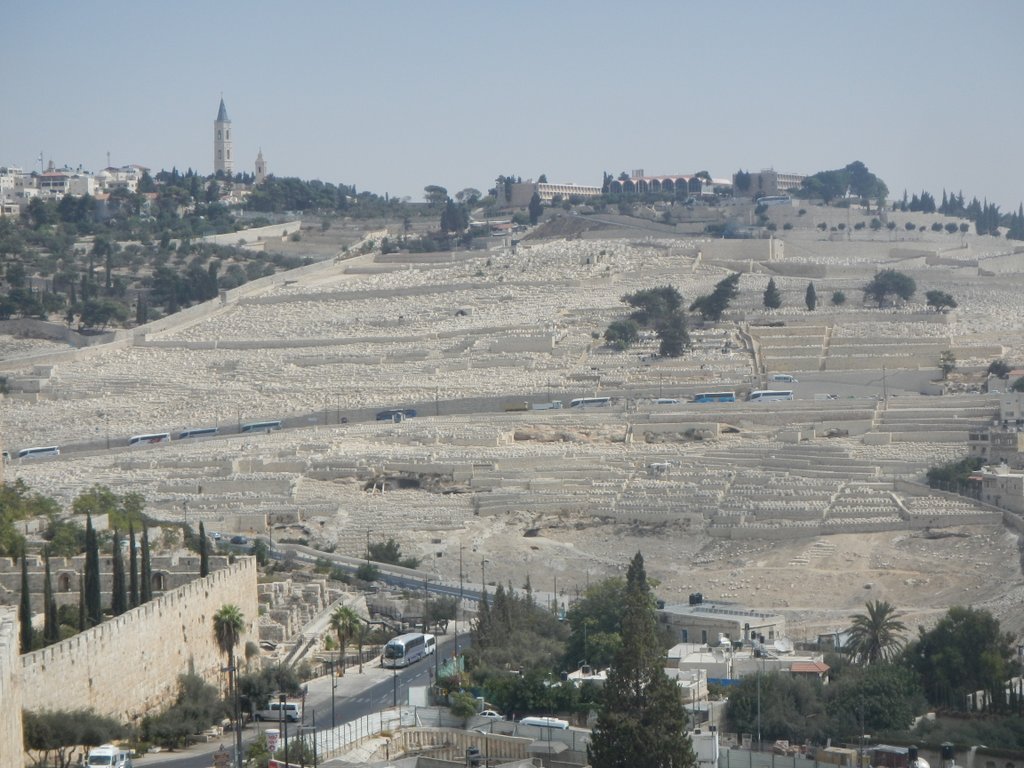 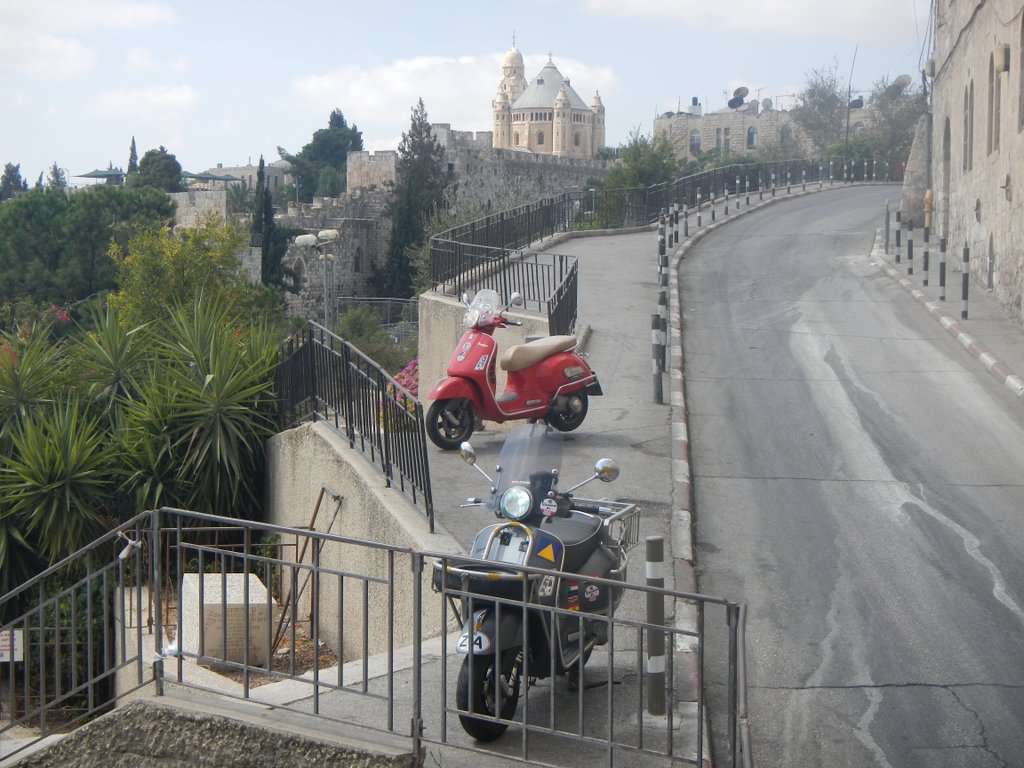 I was excited about today and more specifically going to the Western wall , the reason being  I had a photograph of my grandfather standing at the wall  in 1942  . I had asked my mother to email me the photograph so I could stand as close to were he stood all those years ago , to connect in a small way in  this very spiritual place . David loaded the photographs on to his phone and we spent a while lining up the markings  and then there I stood  while the shutter allowed the light and me to be absorbed , taking a photograph that was 72 years in the making , it felt absolutely incredible . 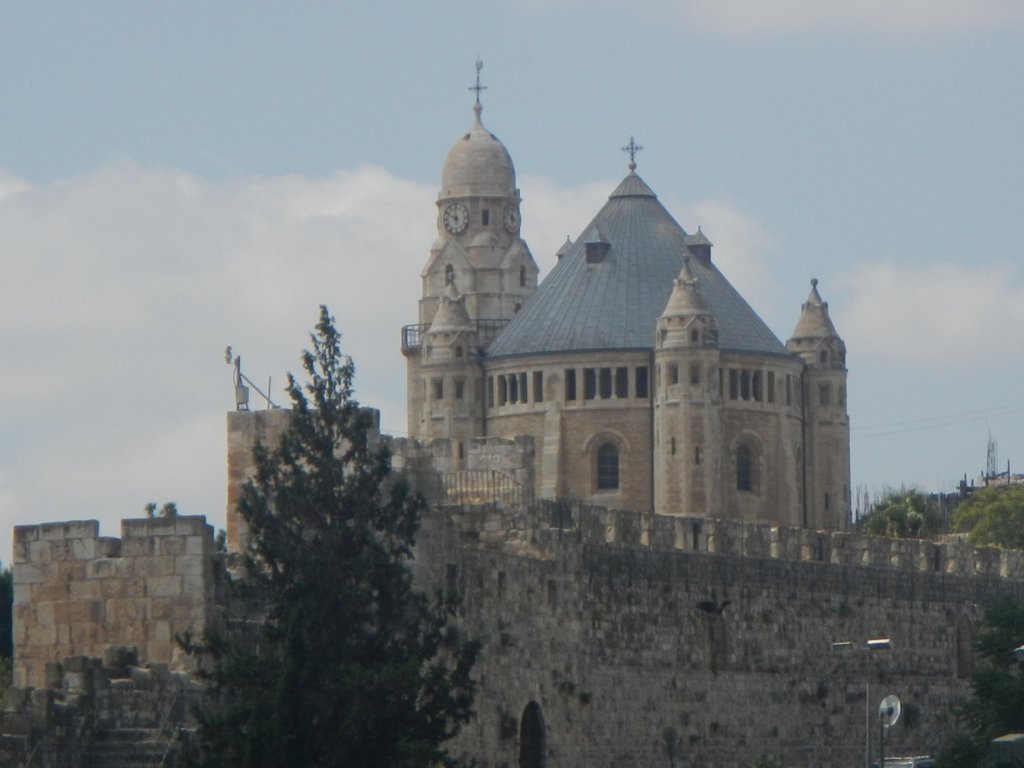 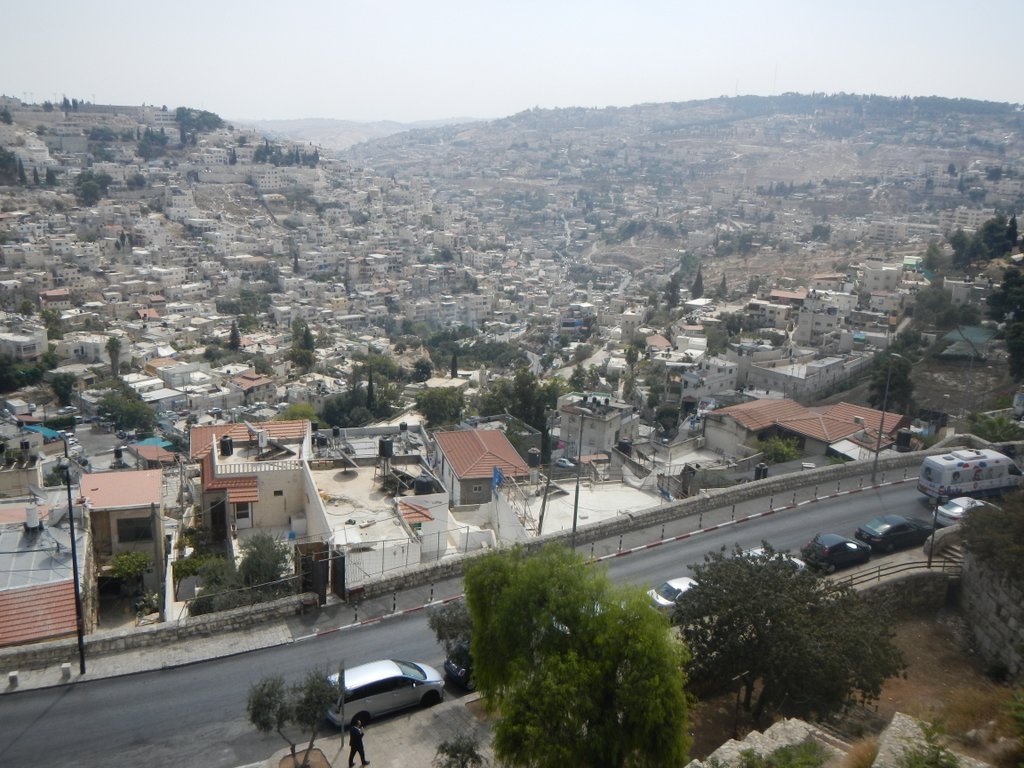 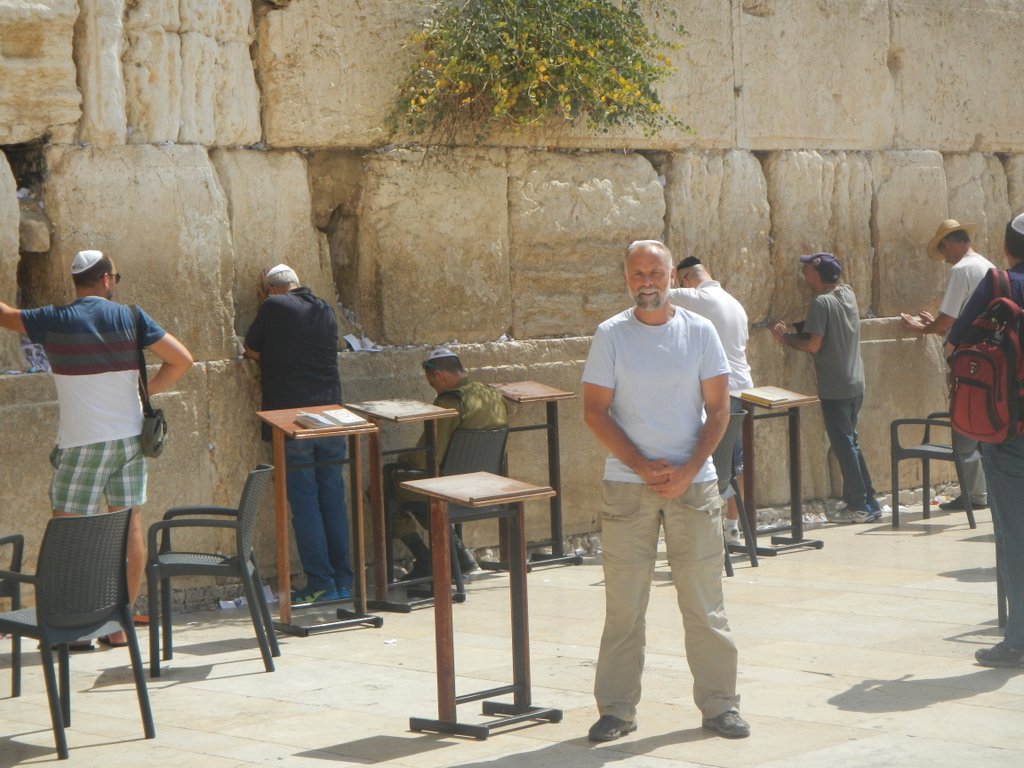 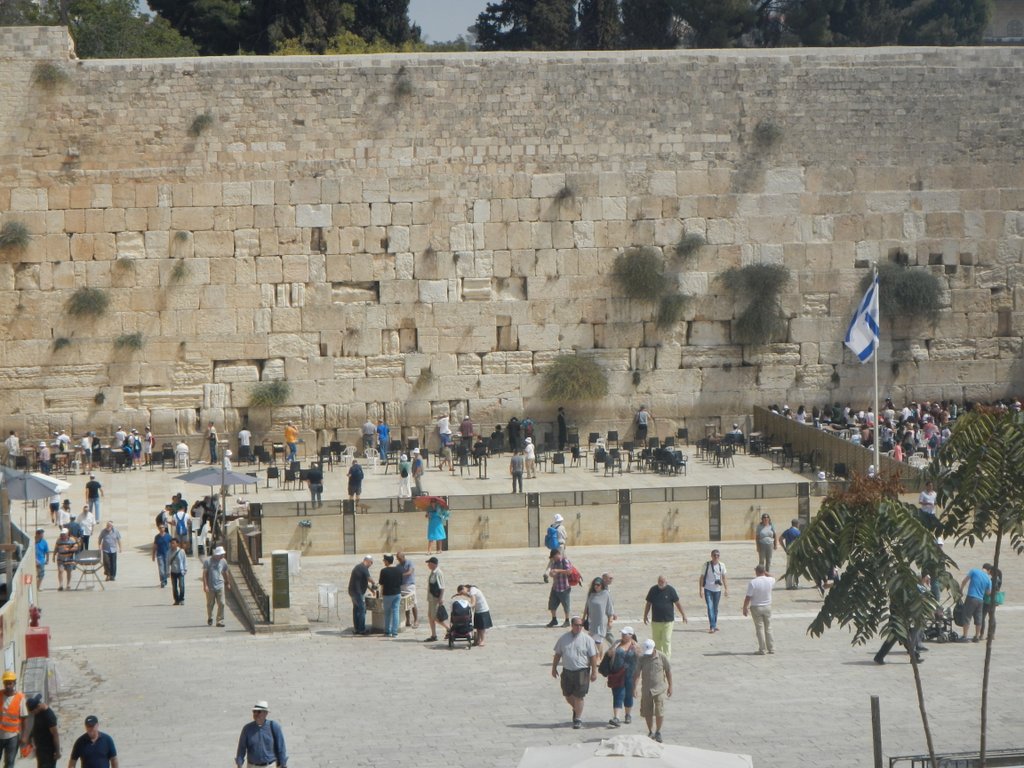 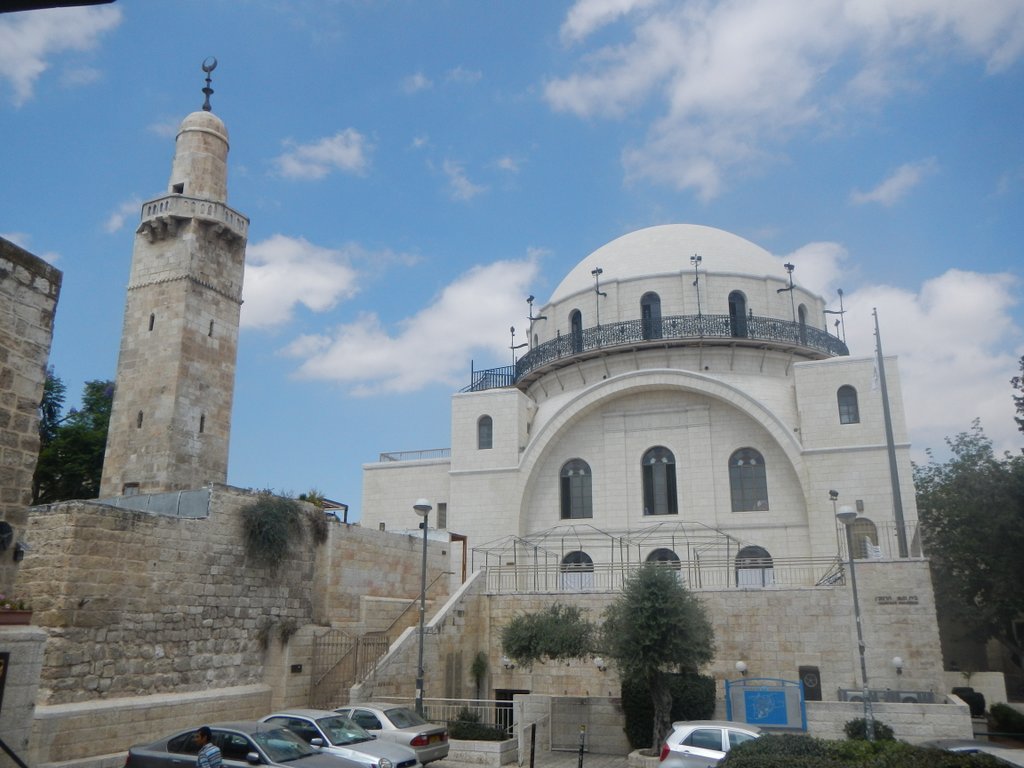 So my exceptional day started viewing the old city , the Western wall , all the quarters in the old city , the gates and  the surrounds As you walk around the old city you have or get the sense that you are walking amongst and between the pages and manuscripts of books both holy and ancient , just an amazing feeling .

David as my tour guide took me around Jerusalem and we spent an incredible day together culminating in a vist to a market in the city to rival Borough in London , I walked around like a child trying everything I could lay my hands on from the fresh lime and mint juice , halva , hummus , freshly ground coffee , rows of  sensory delights to long to list and yet still we prowled the market searching for ingredients to further cater our needs for the pending  celebration but a day away. 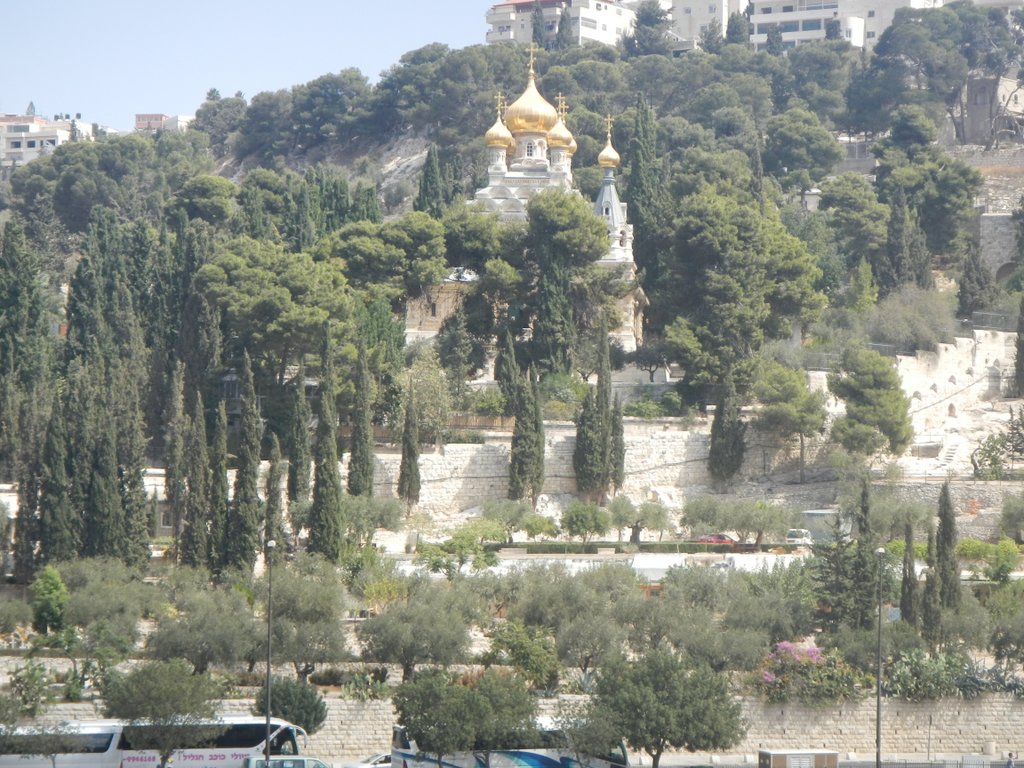 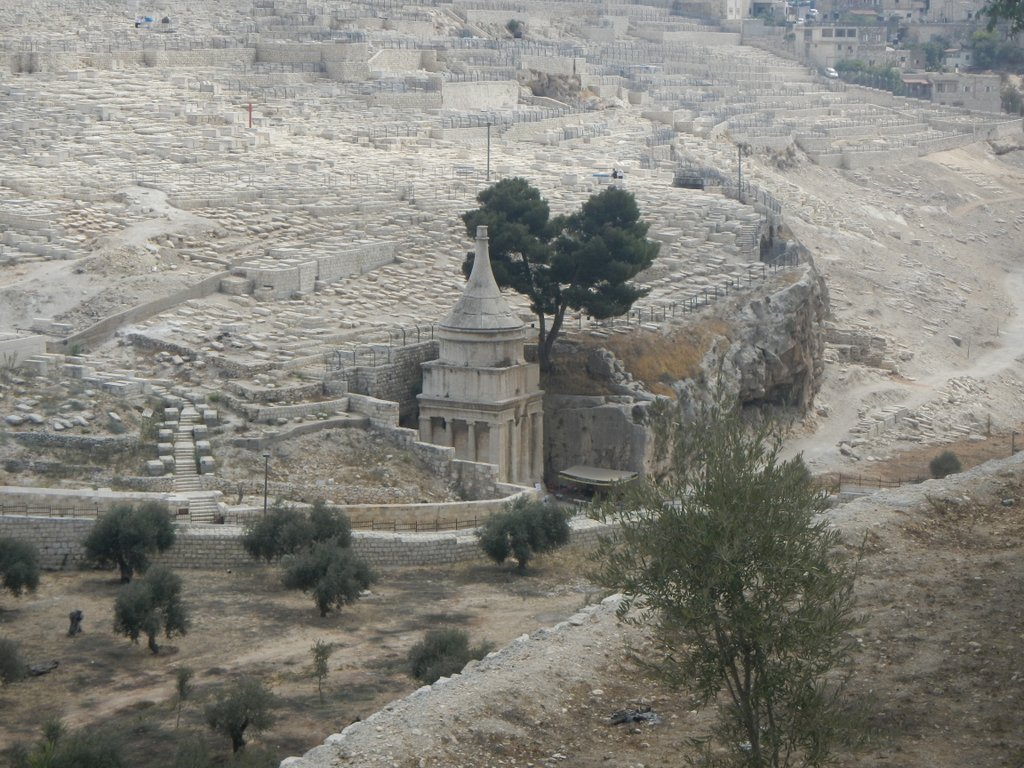 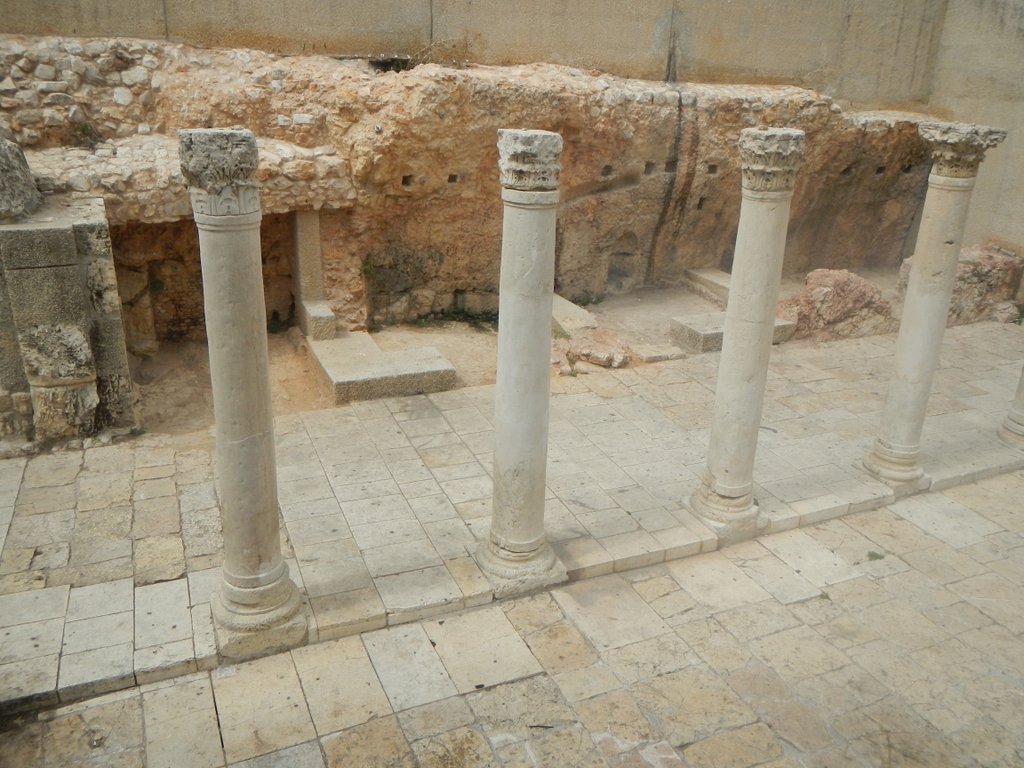 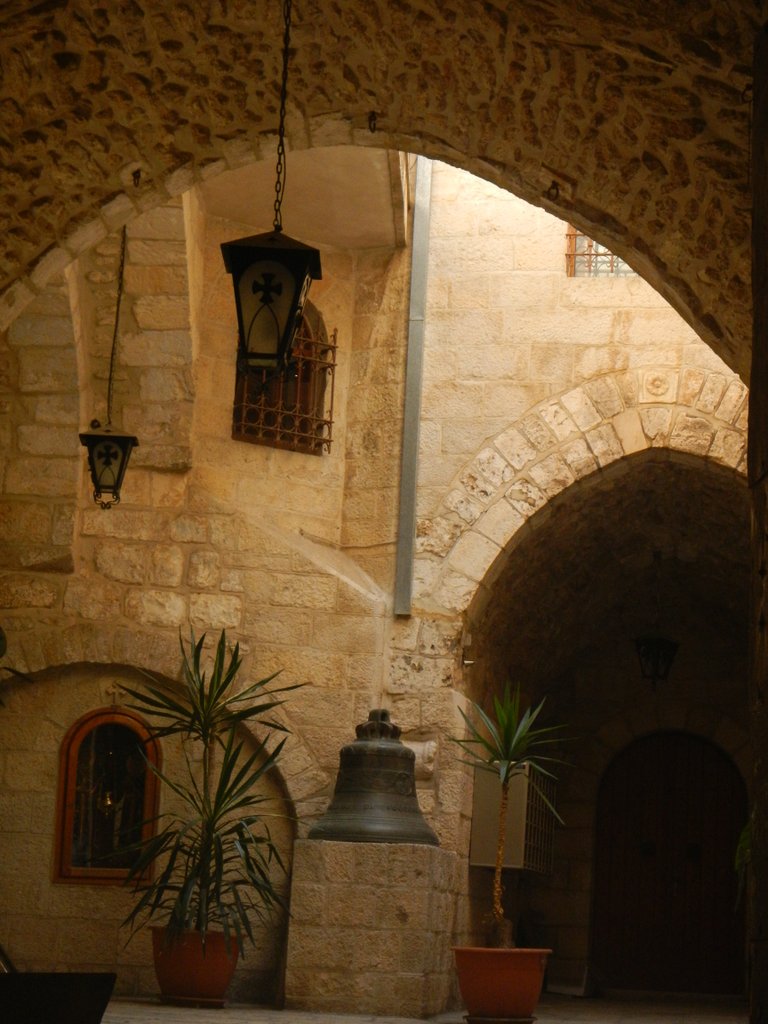 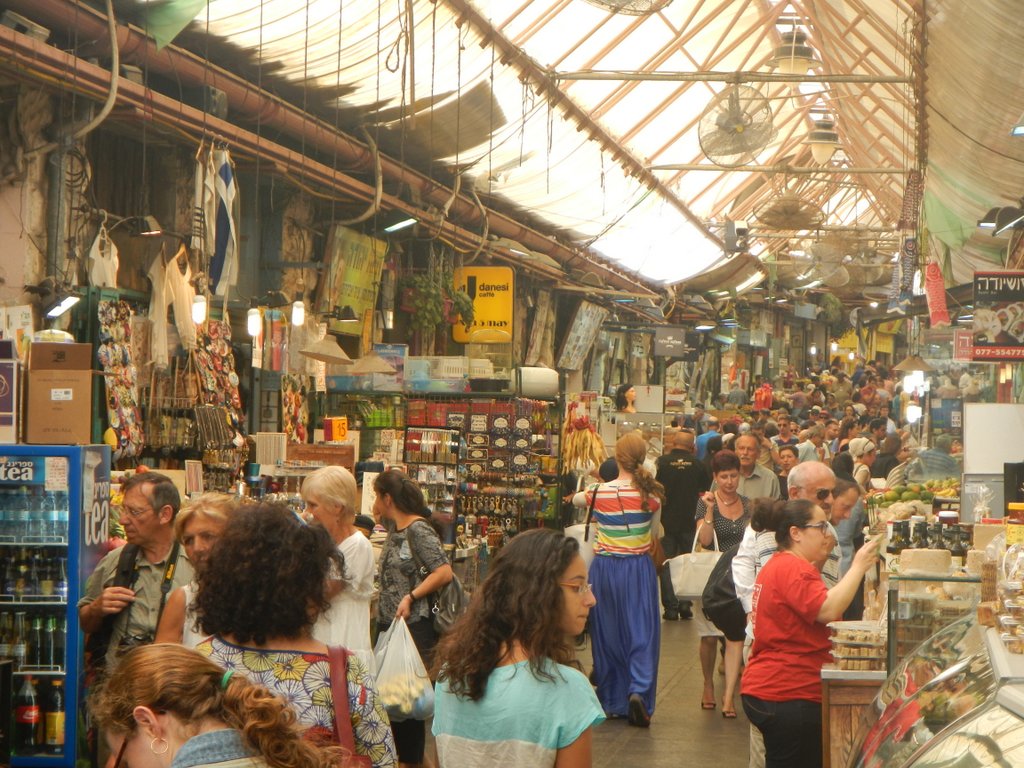 The day ended with me meeting David’s wife Zahava and young son the  soccer star Yonah  and what would a day be without an introduction to  Lulu the family  Labrador with a bark that luckily did not rival her bite. Then back to the apartment to do some shopping because everything would be closed for the holidays , I walked the streets bouncing on a cushion of Israeli kindness and hospitality . A great day.

The next morning back to my now local bakery to be greeted with a wide smile and will it be the usual for you ? To some that might seem like  nothing , but after road vesparing for so long , to suddenly  feel a little local and not just in transit was great . Then off to David’s to meet the rest of the family Ariella and Gilad and yes Lulu once again . David and I then set off for Herodium , King Herod’s palace just outside Jerusalem that would also be his final resting place . From there we rode on an ancient Roman road and tried to find one of the original mile markers , no luck though. 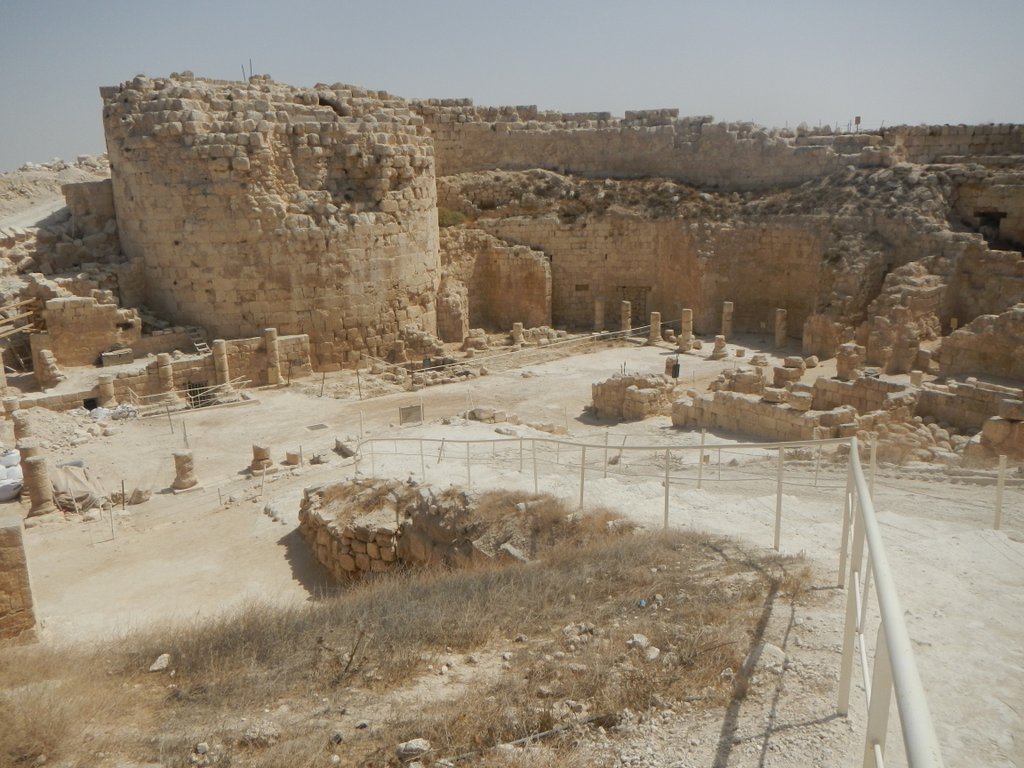 Back to the apartment to freshen up for Rosh hashanna and back to David’s home . The evening was  nothing less than heartfelt and warming , Zahava’s cooking a celebration in its self , the warmth of family and festivity touching my heart . I sat eyes filled with a warmth and admiration , this kind and gracious  man surrounded by his beautiful family and friends . What a privilege ,  I sat  part of this family on this very special occasion. celebrating the beginning of a new year  .

The next morning I shared breakfast with David and Ariella enjoying her passion , dedication and enthusiasm while we spoke  , then back to the apartment for two days of stillness , quietness  and time to reflect on the journey , something I felt I needed to do . The next two days took me from long sleeps to a longing for Africa an emotional journey like the physical one I had ridden . On one of the mornings  I felt like a thief in the night that I had stolen out of Africa without a proper goodbye or like one of those lovers who wake before dawn , collect their belongings ever so quiet  take their clothing dress in the other room and disappear into the dawn . I had been so focused on getting through Africa I did not realise I had not  thanked her appropriately for the safe passage , a continent  so unselfishly shared  , the experiences , the memories , the gifts , I felt I had left without a proper goodbye . Strange how ones mind reacts and the thoughts that flood it when you have time out to process things . It was overwhelming , suddenly being in a place like home for the first time in months , free of worry , confused by so much choice , everything so easy and accessible . It felt like all has just been a beautiful , colourful dream , from which I did not want to wake .

After my days of reflection , it was time for the dead sea to offer her remedies , so off Victoria and I rode to go and bake and bob in the sea were you can never sink , the salt your life jacket , the dark black mud your rejuvenation , and yes my skin did feel  brand new , soft , silky and smooth but the mud did provide me with those youthful bumps just under my forehead  called pimples . For the rest ,  mud and salt liberated body and mind  allowed the  months of road to wash away with the black  mud that had  covered me head to toe . 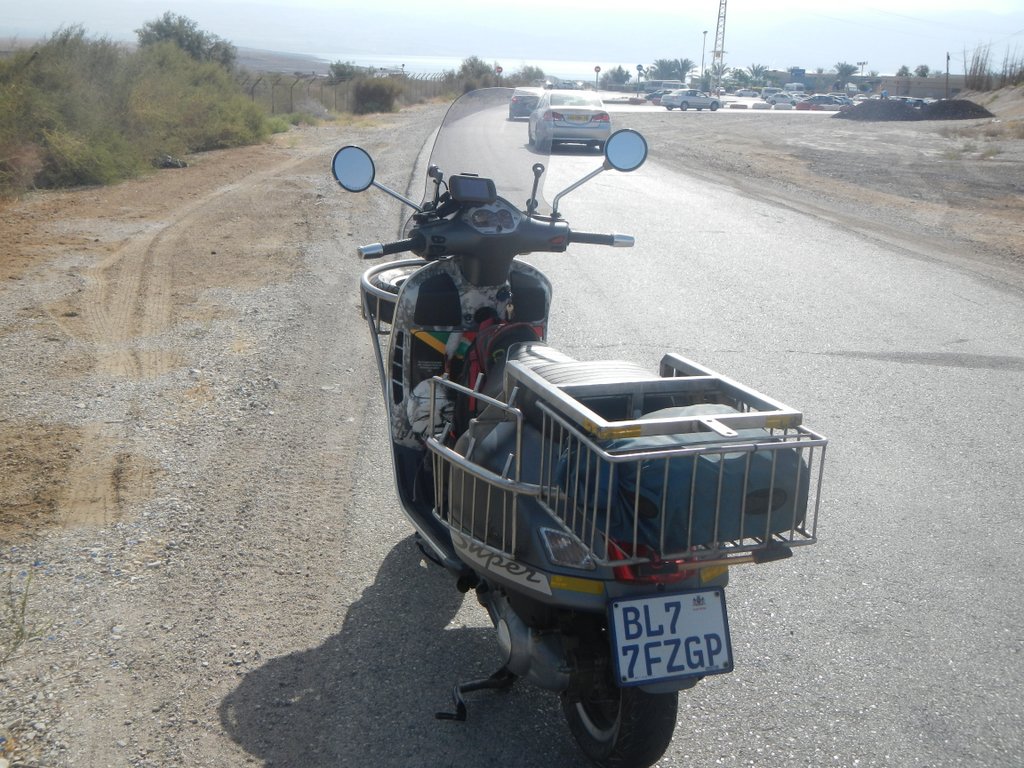 Vic at the dead sea . 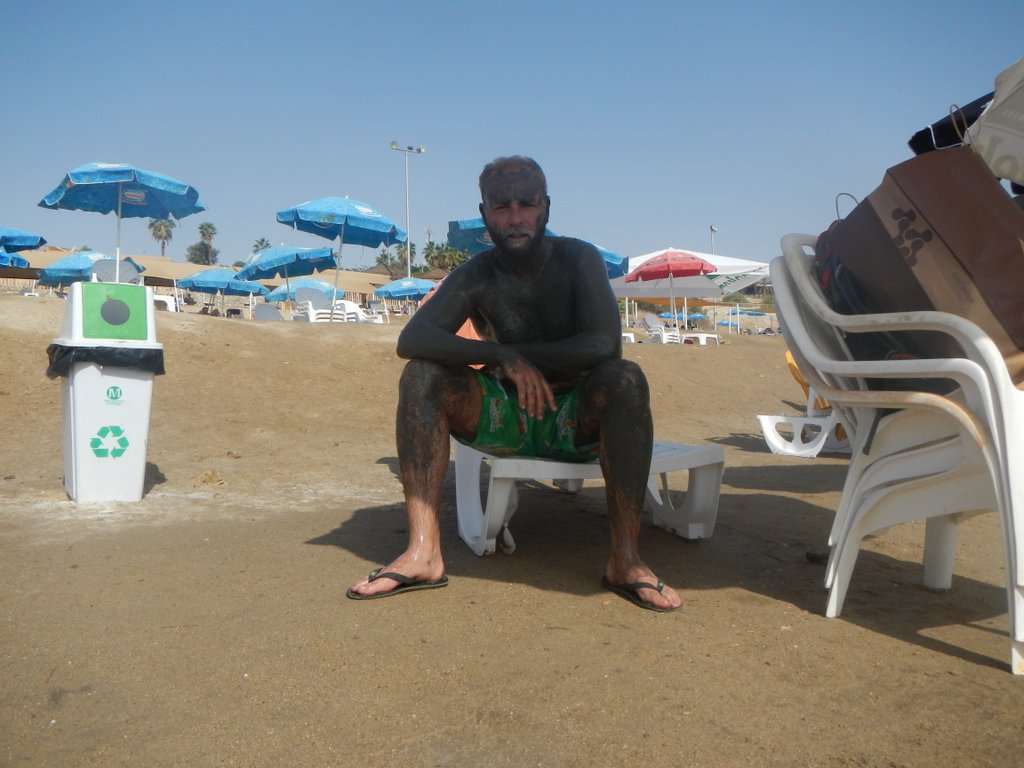 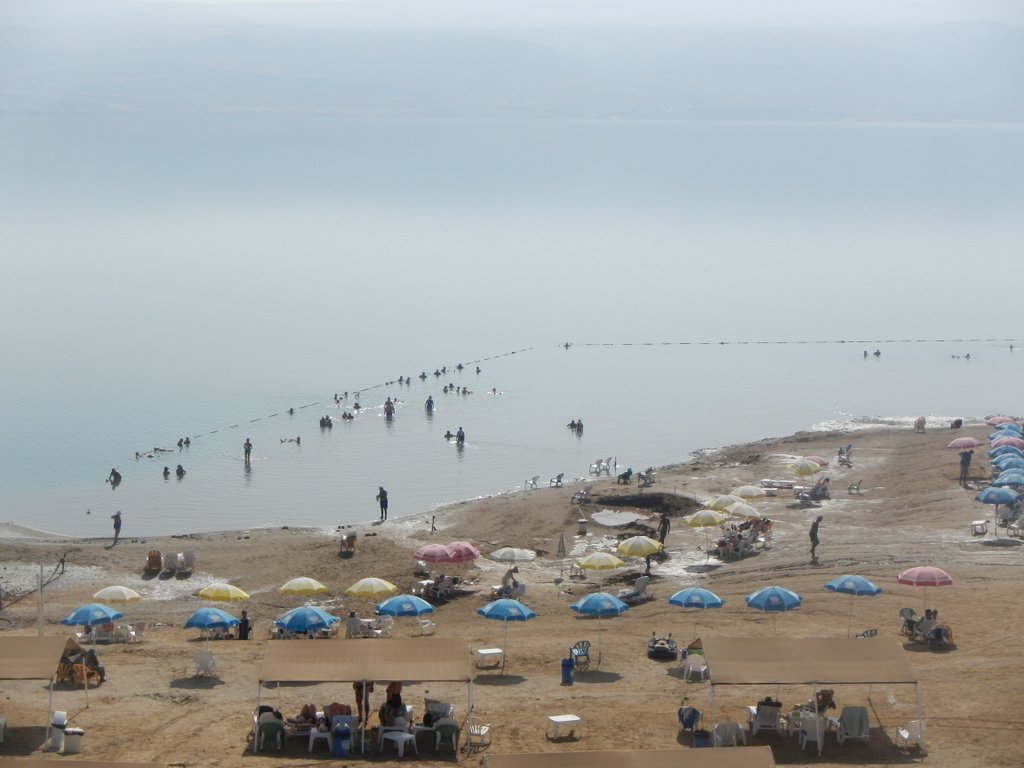 Then back home to Zen myself . The freighter was almost upon  us , the next couple of days would be spent either walking the streets or hanging out with the Bogner’s. The weather mild , the evenings enjoying hummus and gelato while taking in the city on foot or scoot , what a great place to have spent my time , the experience and city made richer by David and his family , my time here  precious and a way to decompress , touched once again by the human spirit of kindness and generosity . 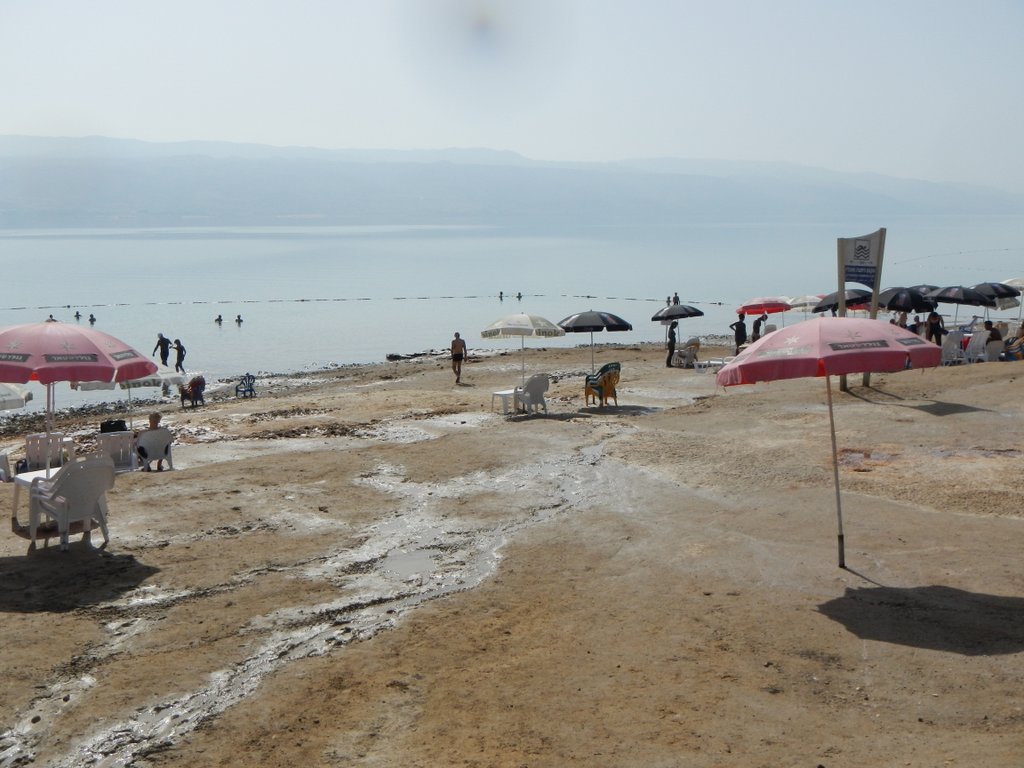 Monday we take the freighter to the place that gave Victoria life and through that me an adventure beyond my wildest dreams  . I will hold my time in Jerusalem in a special place to resonate with me for life , that said