The day had arrived it was time to board ship and sail to a new continent and  the last leg of our journey . I was up early to pack , then I rode out of Jerusalem , enjoying that golden hue that the sunrise brings ,  down to David’s for breakfast and then he and I would ride to Ashdod and the port , the place of  departure . 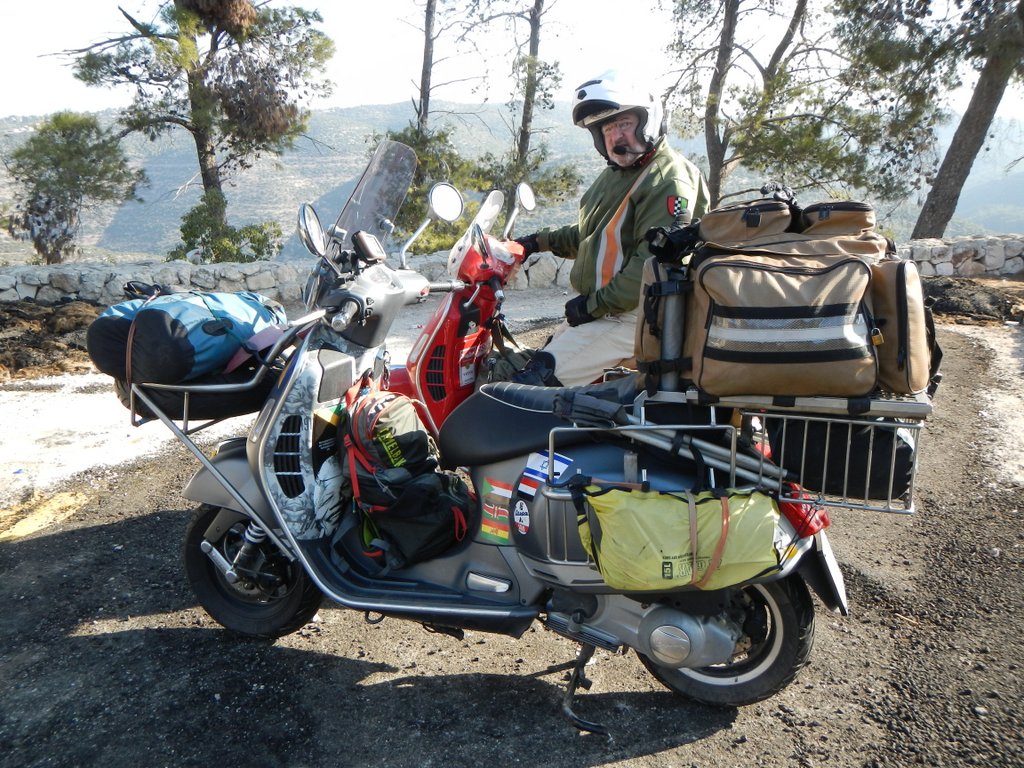 Eggs and fresh piping hot sour cherry muffins courtesy of Zahava was how I  kicked my day off . Now that I think of it , sour cherry could be a groovy name for David’s vespa , let me think on it . Then it was the road to Ashdod , rain threatened but it was only that , we arrived at  the port just after 9 and so the process would start . The amount of time and paperwork to get Vic and I out was astounding , that been said you have to use a clearing agent at the port so they did all the work I just followed and filled in what they put in front of me . 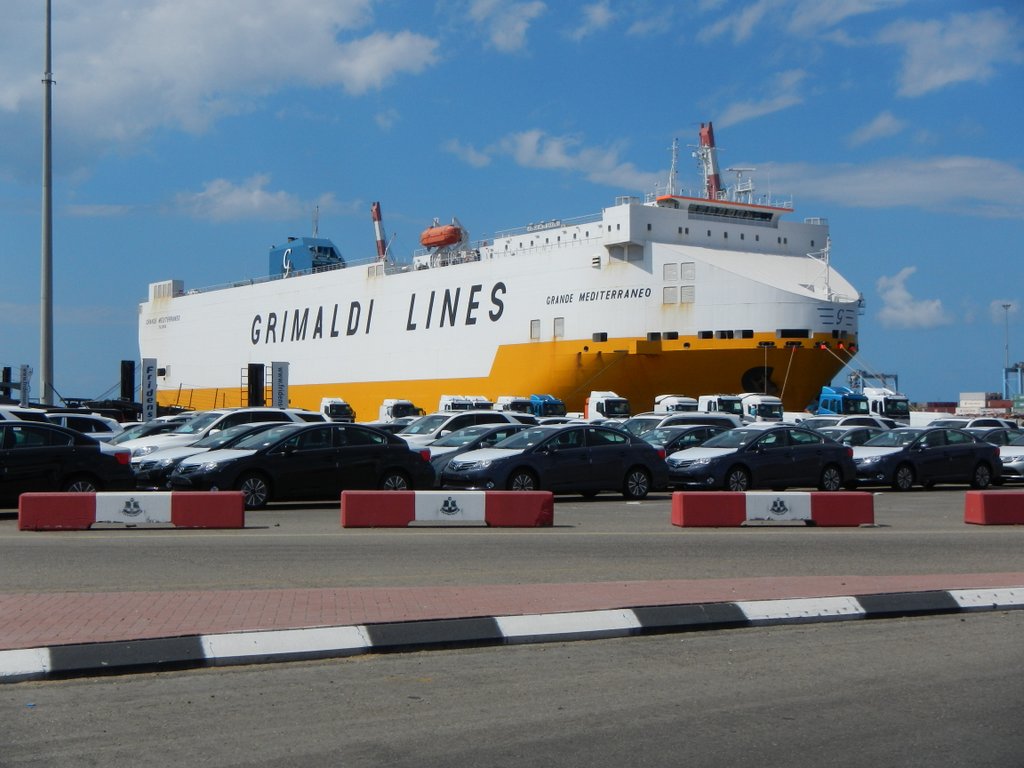 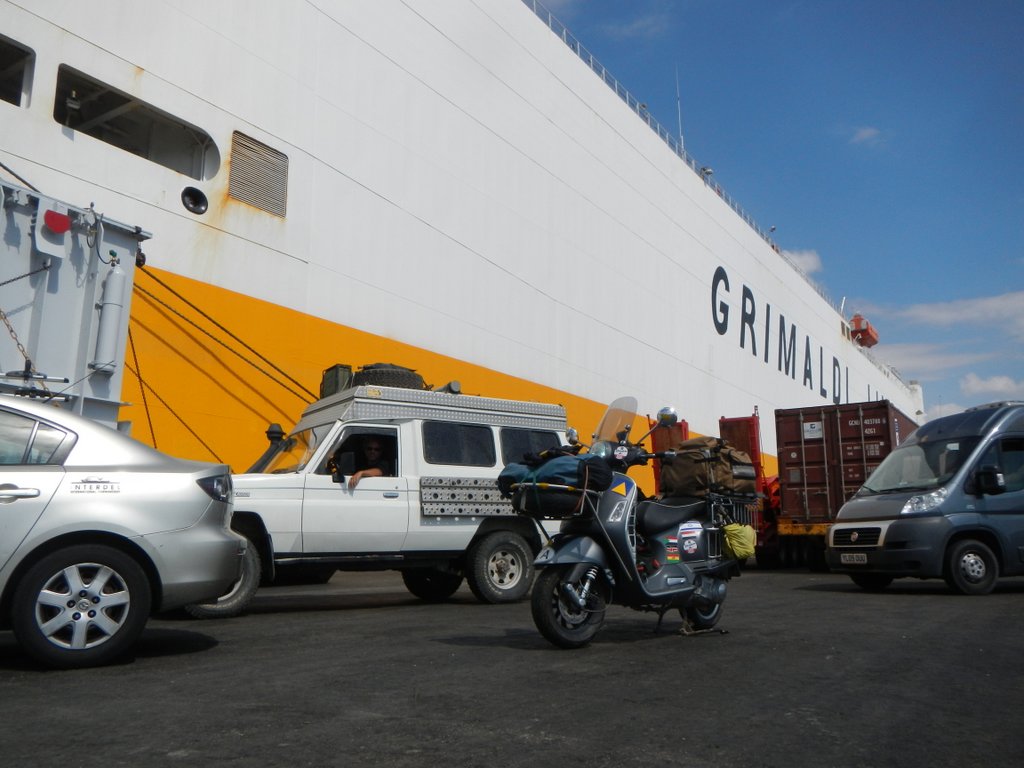 I was to have company on the ship in the form of Leon who had just spent three months touring Israel in his camper van . Jeroen  and Sonja who had just finished a two year over land adventure in their land cruiser , Vic just cant escape those trucks . They had started in Holland from their home  , crossed into Morrocco , down West Africa to the fairest Cape , just cant keep the Dutch away from the Cape , up the East of Africa and they would end their journey by driving  back home after just over two years in Africa . Spectacular , and I was glad for the company. 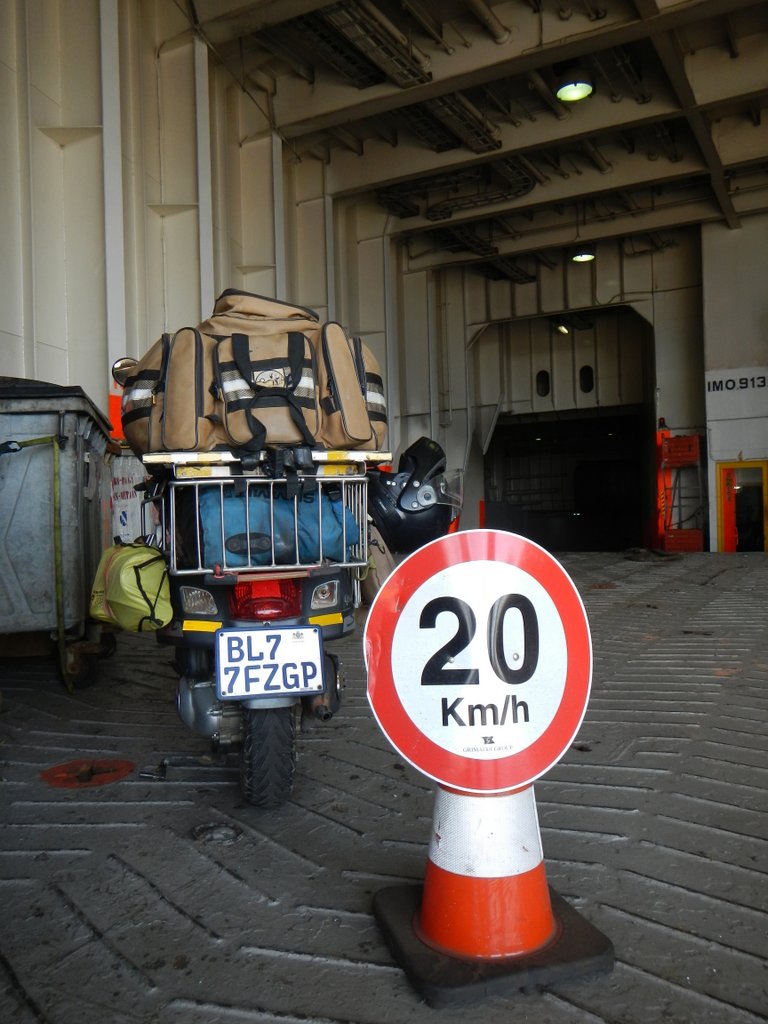 After hours of up and down , we finally parked dockside waiting for the order to board , the freighter was still being offloaded so after about an hour we got the green light and on we rode into the jaws of this metal seafaring giant , 11 stories high , a capacity to transport 5000 cars and other really big stuff you only ever see on those abnormal flatbeds or on mines. Victoria has a 278 cc motor the freighter 1 550 000 per cylinder , Victoria carries just under 9 litres of fuel the freighter 50 tons , we had just ridden into the bowls of a monster .Victoria was given a parking spot and once unpacked she was strapped down to spend 5 days in bondage ,  deep in the dark pit of this monster freighter . 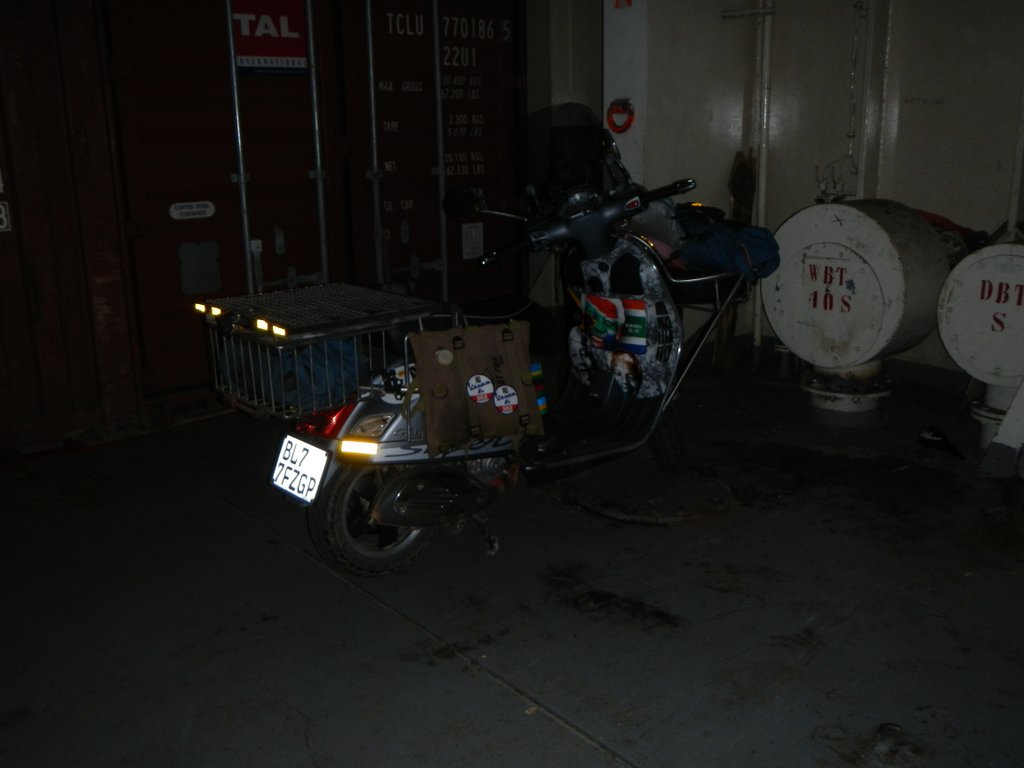 We all got settled into our cabins 9 stories up and were told that our meal times would be 07h30 for breakfast , 11h00 lunch and 18h00 for dinner , other than that our safety briefing would be in the morning and that was that , we stood alone  . We all met for our first dinner at 18h00 , it was great to chat Africa and share  experiences and stories  , then off to bed while the ship still expelled cargo onto the dock far into the early hours of the morning , all the  while I slept in my safety deposit box . Once done she  fired up those engines navigated the darkness to the open seas and set sail for Italy . 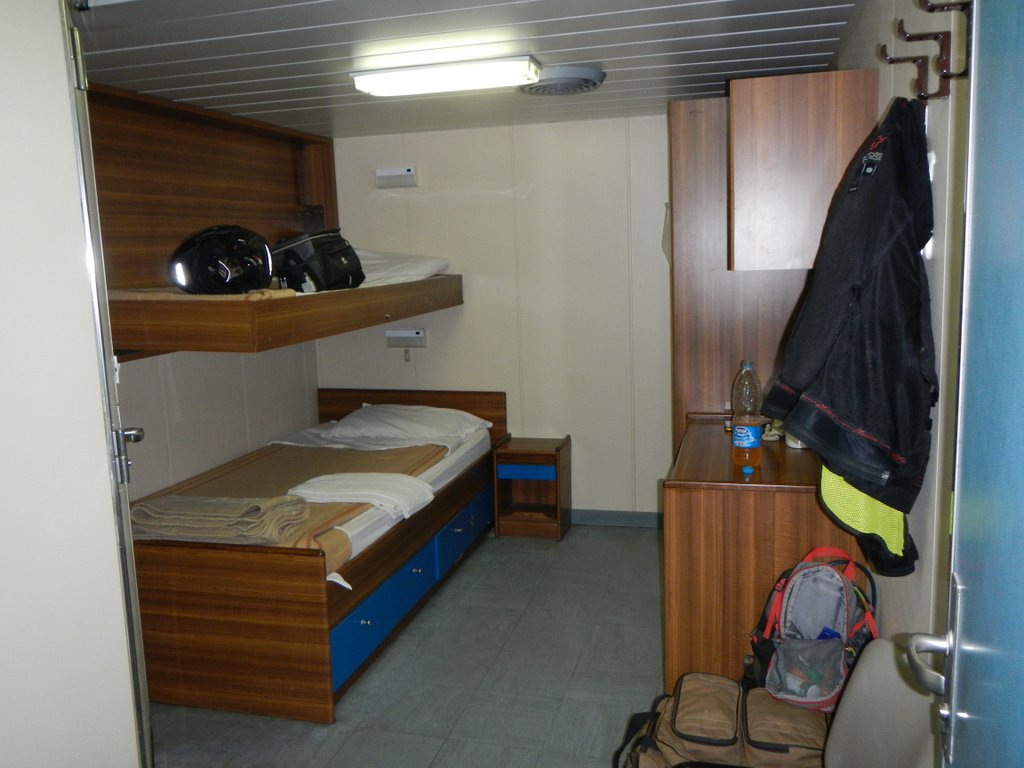 The next morning breakfast and our safety briefing , as well as an outline of the rules and regulations . Adhere to meal times , if on deck follow the yellow lines and don’t cross the barrier , which was another yellow line that halted your progress to the bridge . If you wanted to move around the ship other than the top deck or the immediate sleeping and dining area , you had to call 100 to get an escort , to see the bridge dial 100 , to go down to the scooter dial 100 , to change the channel on the TV , just find the remote . We had been briefed . The vessel was extremely well run and in pristine condition so I knew we would not share the Titanic’s fate . 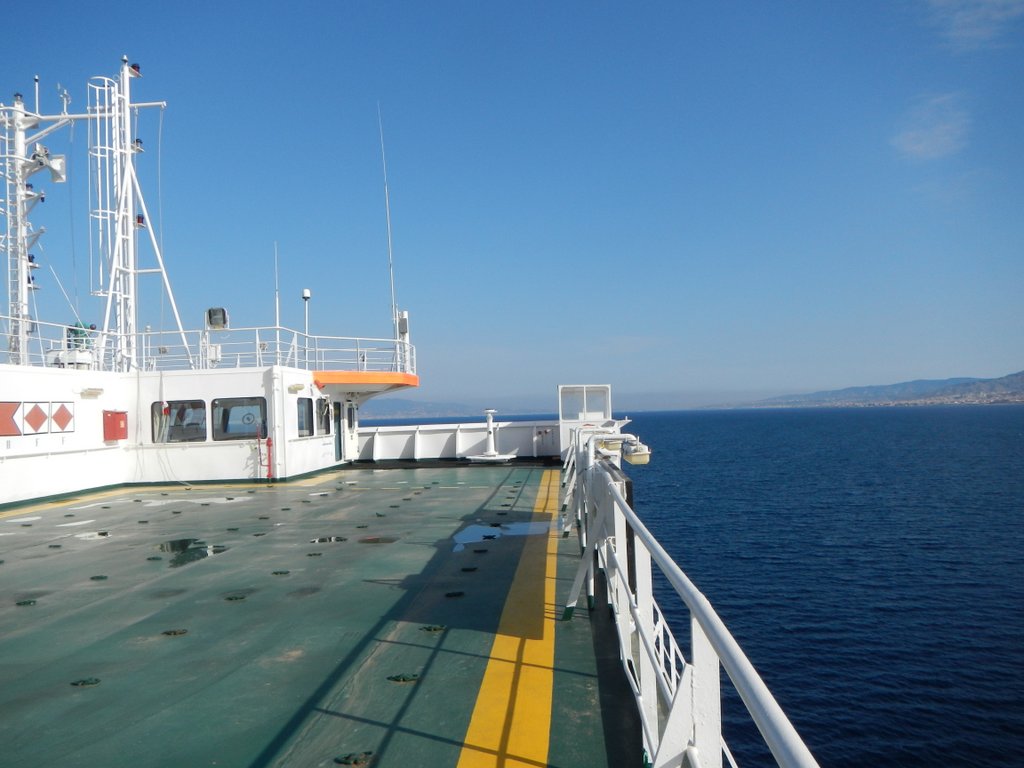 Freighter time is governed by meal times , the food actually a lot better than expected and the portions huge with a three course meal followed by fruit every lunch and dinner . One big advantage of taking an Italian freighter was the high powered coffee machine to keep you well oiled in espresso essence , that smell , that creamy after taste heaven  . It was a real adjustment  sleeping in a place that was never exposed to the sun , the only light for the cabin came from the switch at the door or the overhead reading light with  those off  total darkness reigned , an eerie cocoon my cabin was . All that space in Africa ,  your ceiling the stars , your movement endless with possibility , in comparison this felt like jail , just without the communal showers and that man called Baba  . It was going to take some adjusting . So my days took on a routine that had  me  reading , sleeping eating , reading , sleeping ,  eating and very little else . 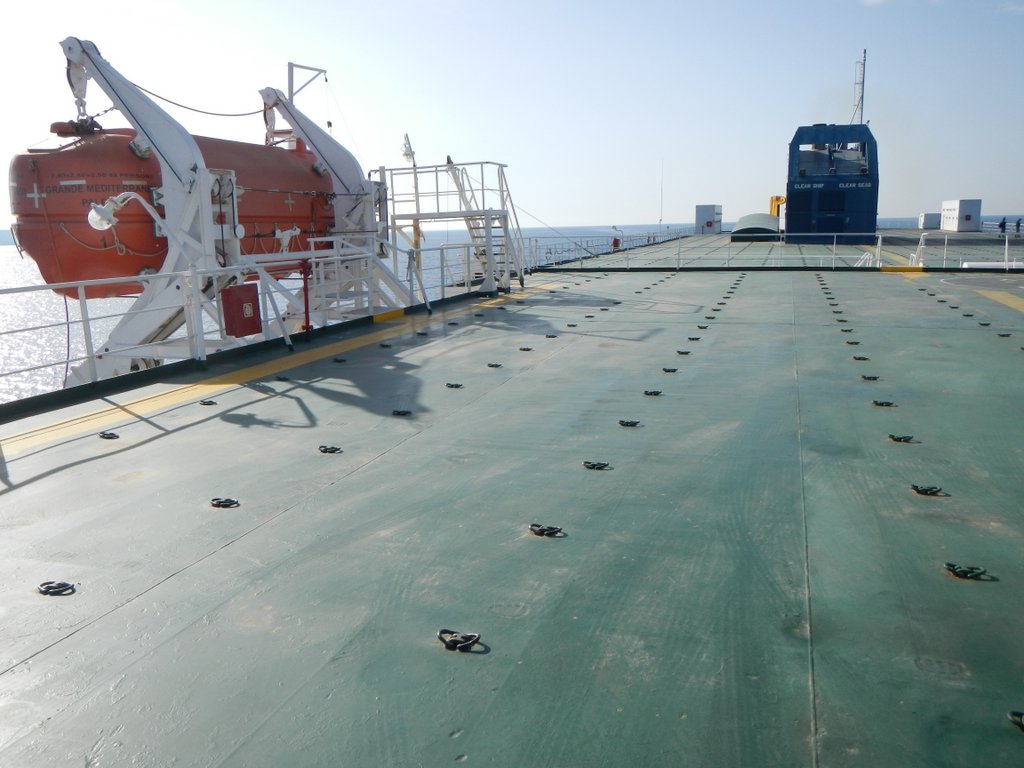 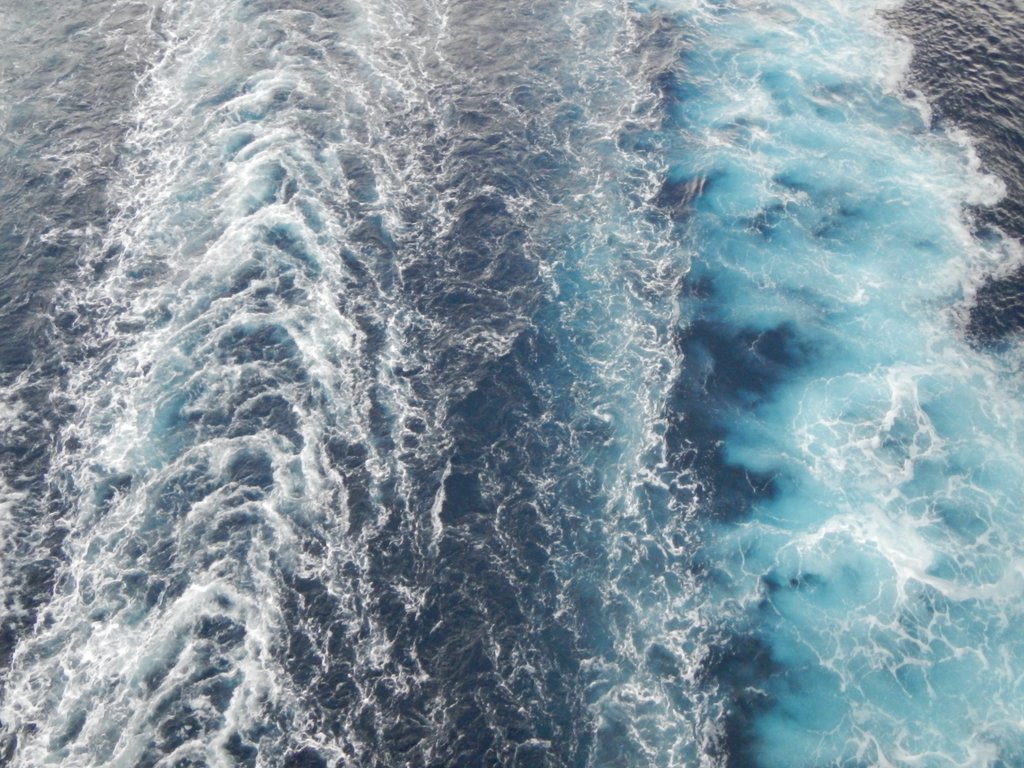 Powering through the blue.

I loved sunrise and sunset up on deck , the wind fresh and cool all around and welcome after  nights cooped up in that safety deposit box . The ocean vast , the sun bringing with it another day and fewer nautical miles to Italy. I would go up on the deck at sunset with some good music thanks to Tim and watch the bow break the waters , it would send up a magnificent spray that would turn the colour of champagne as the setting sun caught it before it returned to the deep blue . Nothing around one except sea , sky and me . I revelled in those moments on the high seas , as this metal giant carried me with size and safety, allowed for time to change and disengage , allowed for a different  pace and purpose. 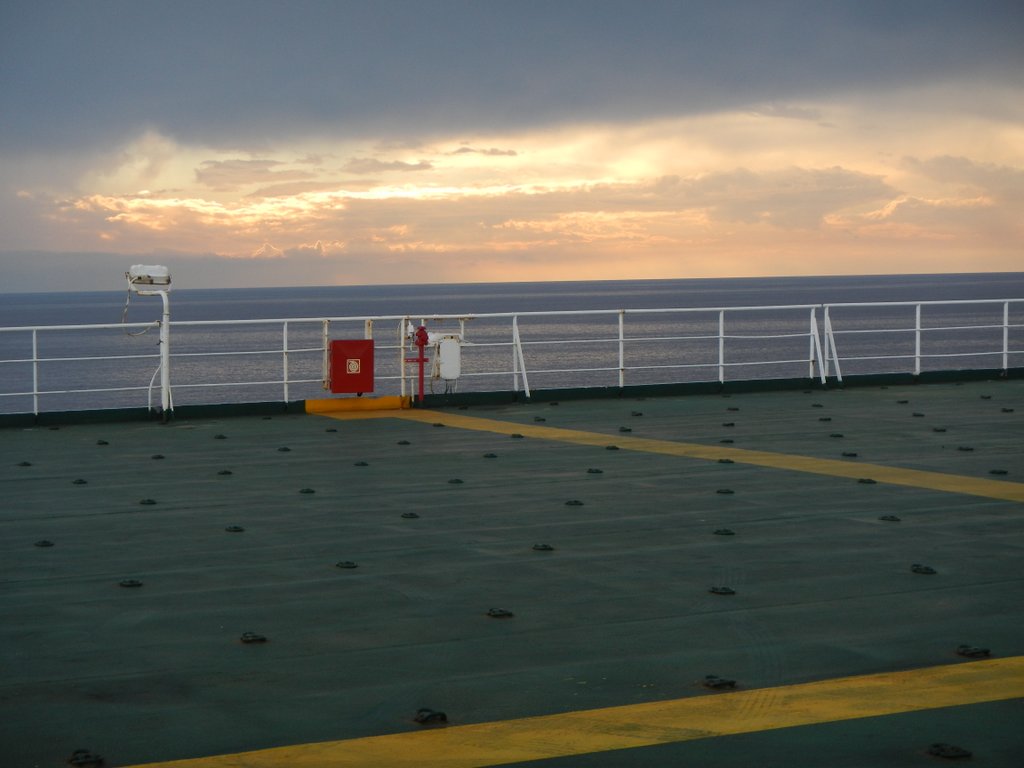 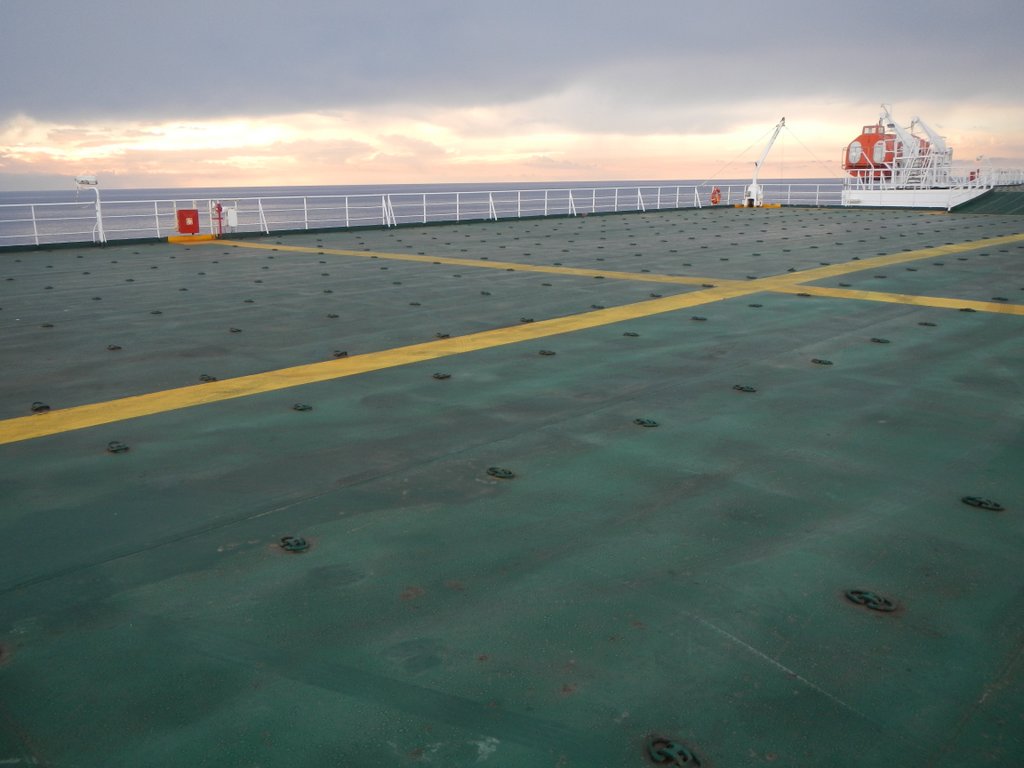 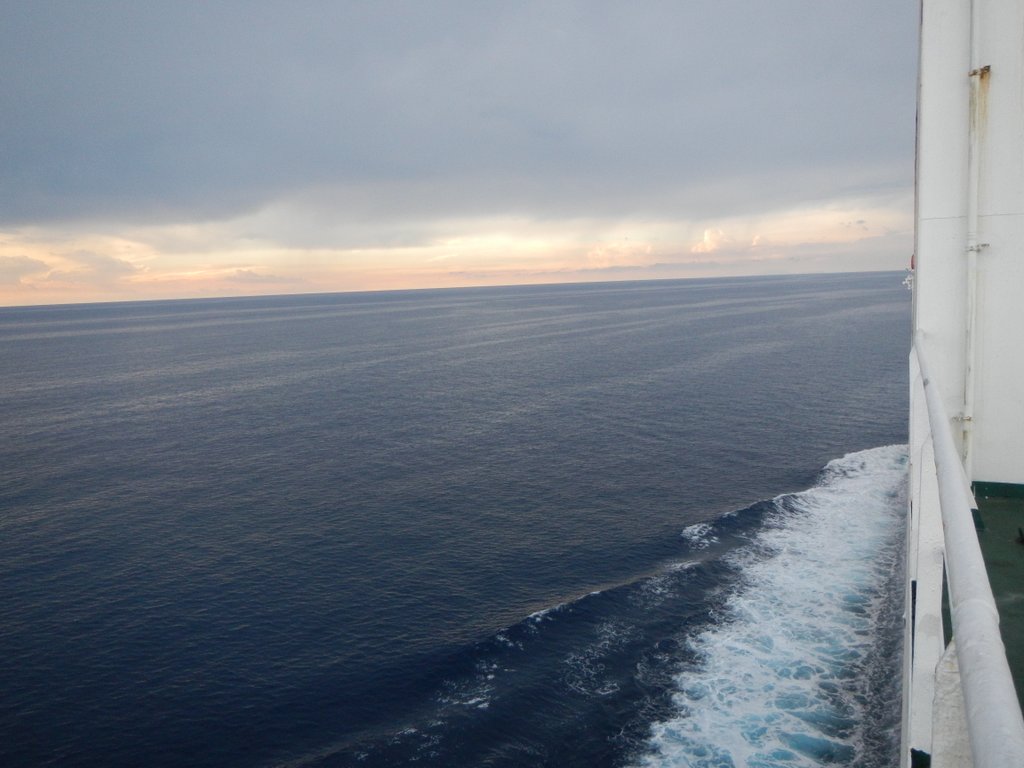 Initially this time felt strange to me , there was no preparation or  planning , no packing or unpacking no stopping to stretch , nothing but freighter food routine , Victoria strapped stories down in the dark waiting to be liberated to ride the Amalfi coast ,  but it was a good time to mentaly prepare for Euro Europe , the changes that come  with a totally different continent and country , damn exciting , Italy the land of swine and wine was almost upon us .

I listened to music mixes that took me back to rides and reminiscing of Africa , I read books that did not involve sights , top choices or the not to miss stuff , so I reconnected with the world through  words  written, lyrics sung  , music and mind , a time of peace , tranquillity and days endless with no purpose , A good time for me , my world had time to find scale . 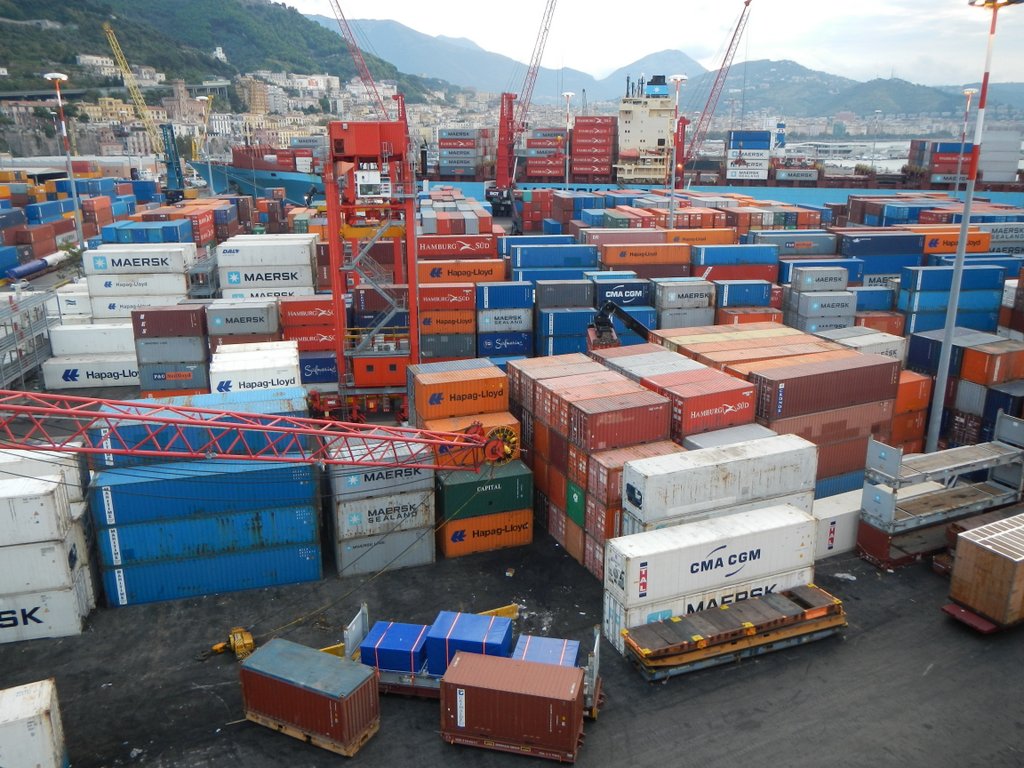 The freighter found her mark early in the morning , I loaded up Victoria , enjoyed my last breakfast with my fellow travellers and prepared to disembark , both Vic and I could not wait to ride free once more .