Back in time , touring the Amalfi

Getting Vic an I out of the port took some doing and a couple of hours of pillar to post ,  I had my passport in hand , no entry stamp though ,  no documentation for  the  temporary import of the scooter into the EU , and I could not really tell customs , Victoria was returning to her country of birth to visit and had no intention of staying , for she to is an African .  Italy  bore her teeth  sharpened by years of  bureaucracy and yellowed with age and lack of will , so we settled into the great cog and let it turn . Little did I know all the paperwork had already been done by the shipping company , and only once I went back to the ship and they called the agent was all sorted out in seconds after waiting hours .

The time had finally arrived after months of travel , Victoria and I about to put foot and rubber on the country of origin and the last boot of our journey , I am sure  I heard her say lets Ride , lets  Ride Italy . I can not be sure it is hard to say , she seems to have picked up a very heavy industrial Italian accent . Yes lets ride ! Lets scooter Italy .

Out of port and into the town of Salerno , I could immediately feel the difference , this was scooter and coffee country , two wheels and high on caffeine , riders and drivers alike  jousting for their place on the tar , bumpers used for their intended purpose , scuffed and cracked from all the contact , the only sane way to travel here is scootering , nothing else make any sense and gridlock is not  good for your health. It was time to get that third party insurance and fast , between these Senna types and those tourists not from the European school side of  driving , all hell had just broken lose on Vic and I , She was loving it , taking and making her gaps,  using all that overland body armour to scare her way into town. 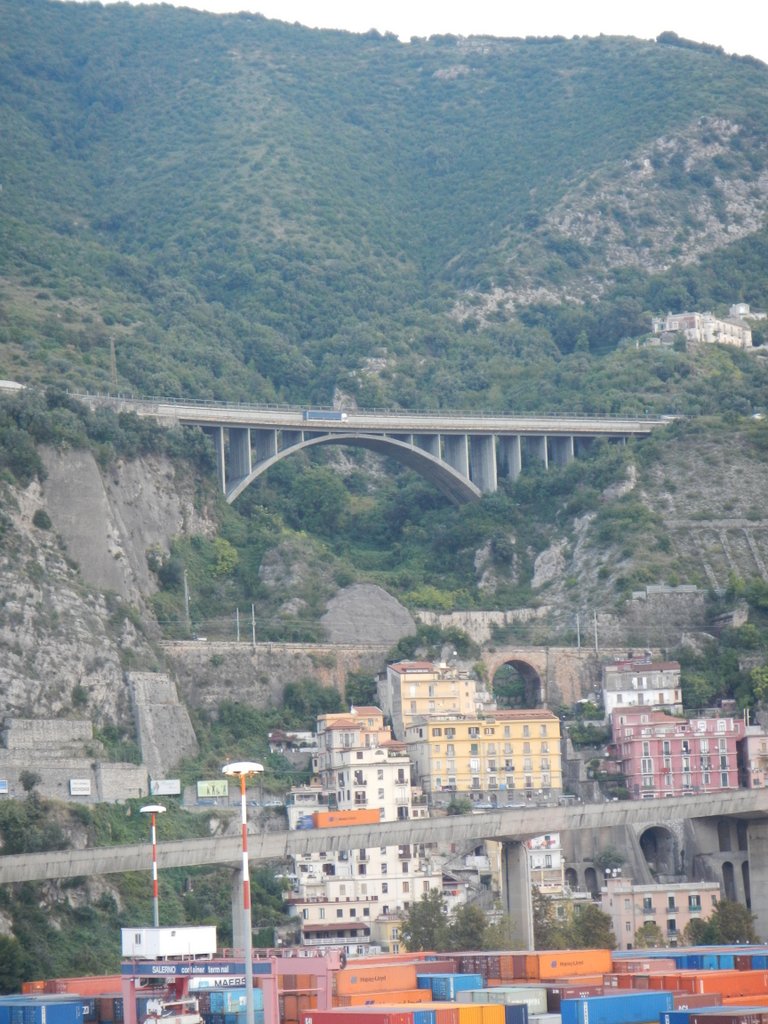 Bridging the gap in Salerno.

I found the equivalent of the automobile association , happily pulled over , parked Vic on some cool cobbles and started to enquire with the man at the desk about third party cover in Italy ,  nobody in the  entire office could understand me or my very foreign language ,  English . So I  walk the streets outside the office trying to politely find a translator , not much luck down here in the South.  so after spending time on the street with people thinking I was begging for E euro and giving me a wide berth  I eventually found a couple in the office buying some cover for themselves , who could translate . In the end they did not offer this kind of cover , so I tried two other insurance companies in town , still no luck . It is amazing , at every border crossing in Africa you get mobbed by vendor’s of this simple paper product , but here in the land of wine and many fruits , no cover could be found.

It was getting late and I did not want to spend a night in Salerno but rather somewhere down the Amalfi coast , which I had heard so much about and was itching to ride , we took the gamble and set off , eyes on storks , mind focused , lady luck would just have to work a little harder until we found our security blanket. 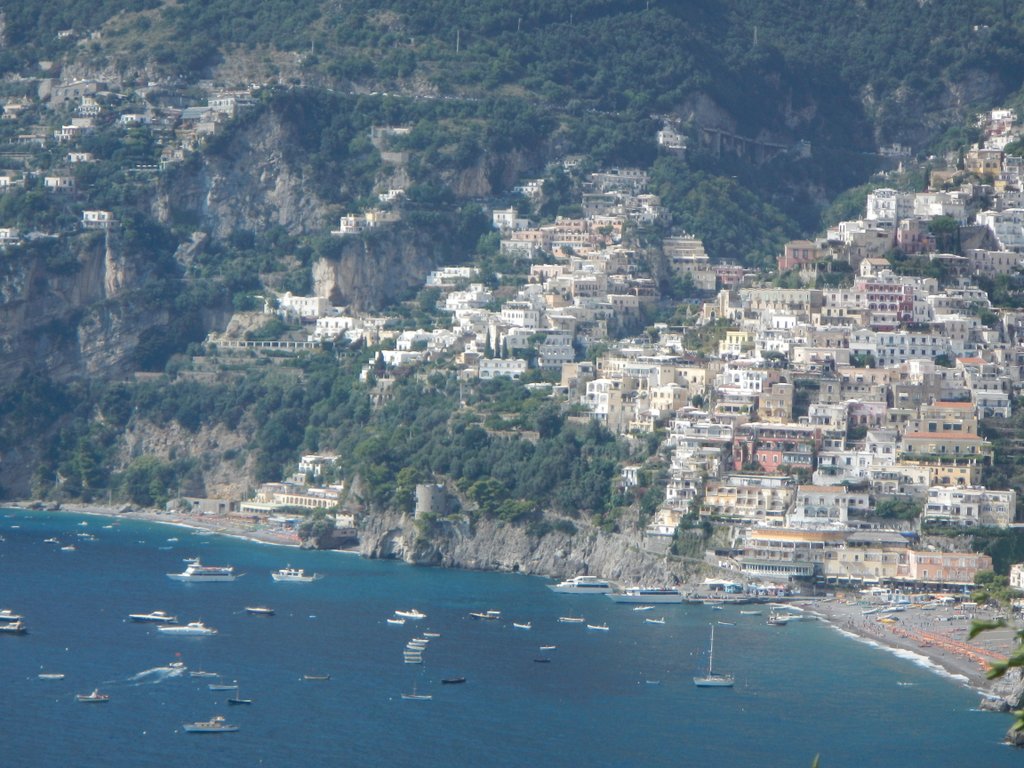 Riding those cliff roads was a brand new experience , very , very narrow with all kinds of oncoming , Victoria and I took on the Amalfi drivers . The coast is not that long in miles but takes hours and chess master like concentration to navigate . The almost single lane that ferries everything from coaches  with on board loo’s , mobile homes , scooters , bikes , pedal power , public busses , the chauffer controlled black Benz and the ever  lethal indecisive  hire car vaguely steered by periscope peering people . They all come at you using as much of the tar as their size or speed dictates .

This malnourished and confused  strip of tar , does not curve like those found  on an Italian Bella Donna , but rather has the appearance of  a brawl between two intoxicated , axe wielding  giants , who took to these cliffs centuries ago to settle a dispute  as to who has the biggest club . Axe to stone they bombarded mother earth to their will , steep and sheer cliffs , this dramatic coast line was born . Those that followed built their lives , hanging on to the rock  between mountain and sea . 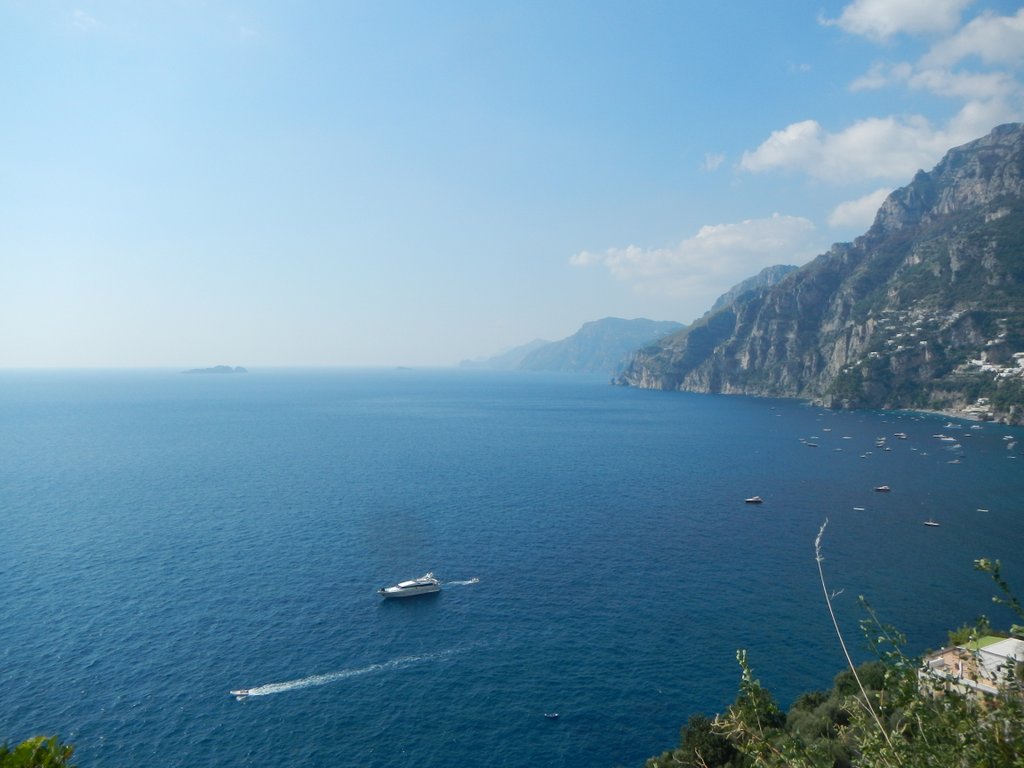 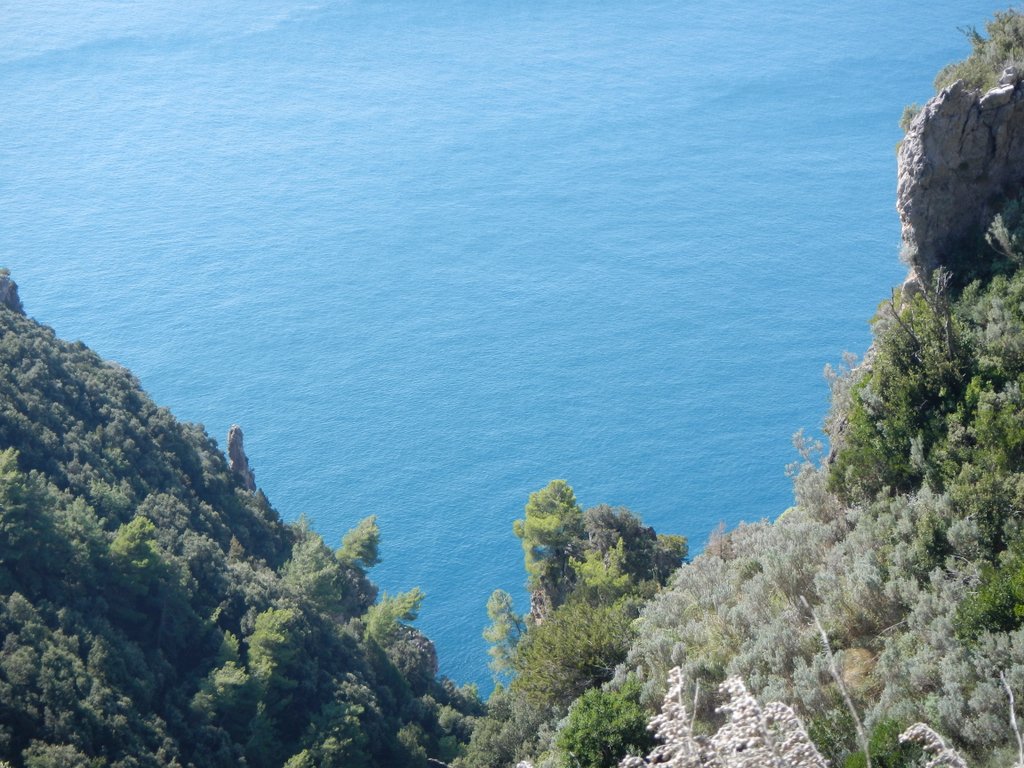 No cure for vertigo . 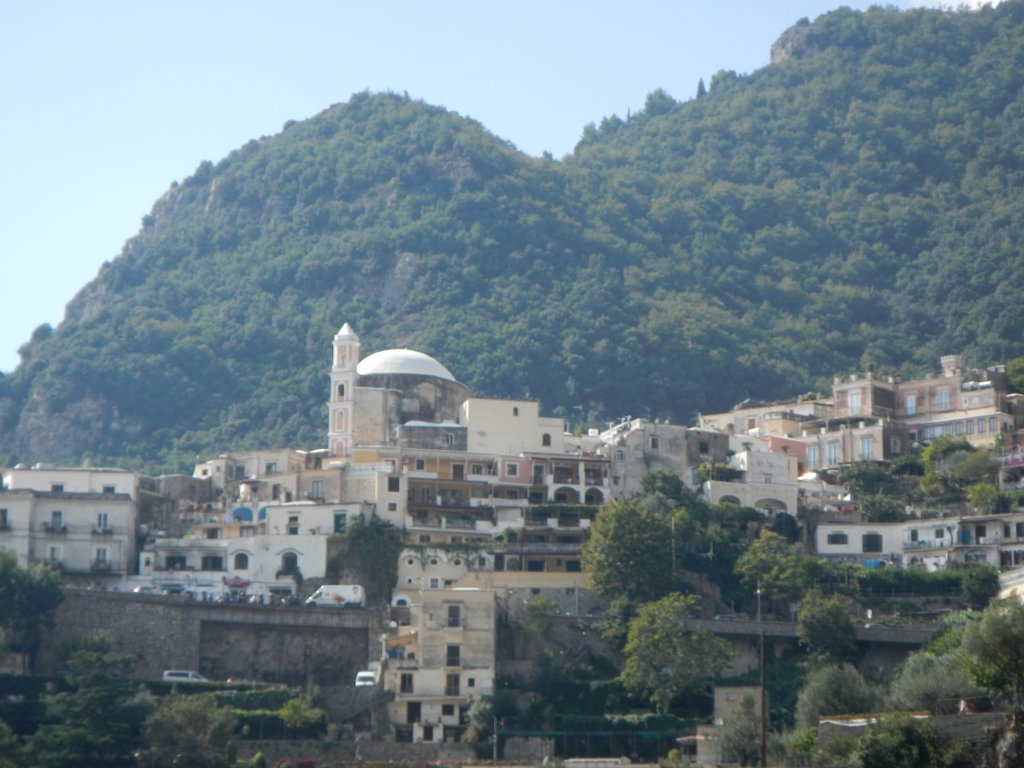 The lane to Positano .

I stopped often to take in the  views like none I have seen and to count my lucky stars that no bumper had found home , unlike poor Leon from the freighter . I found him running up the road with his camper van stationary except for those fierce flashing hazards as he set off in hot pursuit after his hit and run incident that left metal passing stripes all the way down his left . He had stopped to exchange details , the guilty driver said he was going to move his car and get his details . Leon should do the same , on turning around , Leon found  car and driver gone .

The coast is lined with homes , hotels and coastal life  that burst at the seems in peak season and threatens to burst in the low season , it  felt very high season to me . Positano a very worthwhile stop , if I had not been on the scooter I would have sat all day under sun ,  crisp white napkin around my neck , clutching garlic butter , lemon sauce smothered shell fish with both hands and washing it all down with a bottle of local white , while dreaming the day away , so I will have to return , by bus , by cab , by any means to Positano the village of views .

All the while I was enquiring as to the elusive third party insurance , still no luck , I was told that I should have better luck in the town of Sorrento as it was the largest of towns and had many companies that might offer me a solution , so off we rode . The going slow , turns and traffic , we eventually found our way into Sorrento and tracked  down the  information office . My requests fairly routine I thought , good central accommodation with off street , preferably undercover parking for Victoria  and third party cover . This is where I met the star of Sorrento, Fabiola for the first time , who found me a camping ground on the sea with parking for Victoria . Parking comes at a premium in these parts , especially off street , it would remind me of Clifton in the days to come as I wondered the streets of Sorrento. Fabiola also found me a couple of insurance companies to go and see.

So we set up home in the campsite , I hired one of those mobile homes with no wheels built into the ground , unpacked and set off into town . As it turned out I would not be able to buy cover in Italy or any other European country for that matter and it would take me 5 days of internet search and secure to eventually get the cover I was required to ride with .  Canada of all places  came to the rescue through a insurance company I found on the HU website. 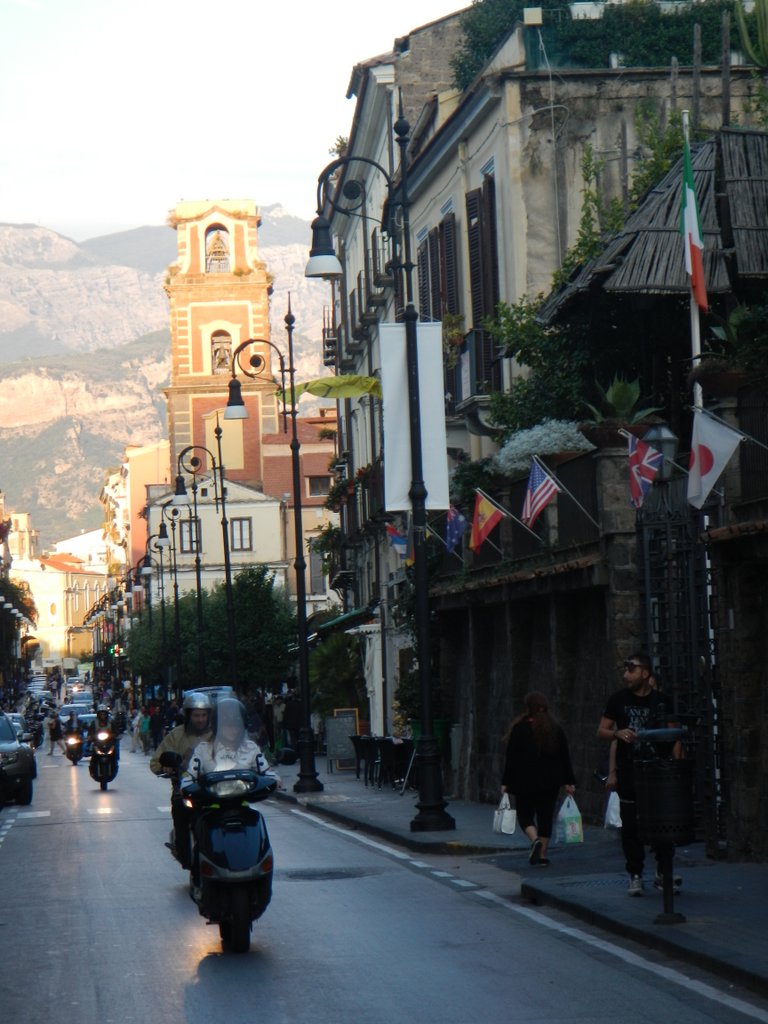 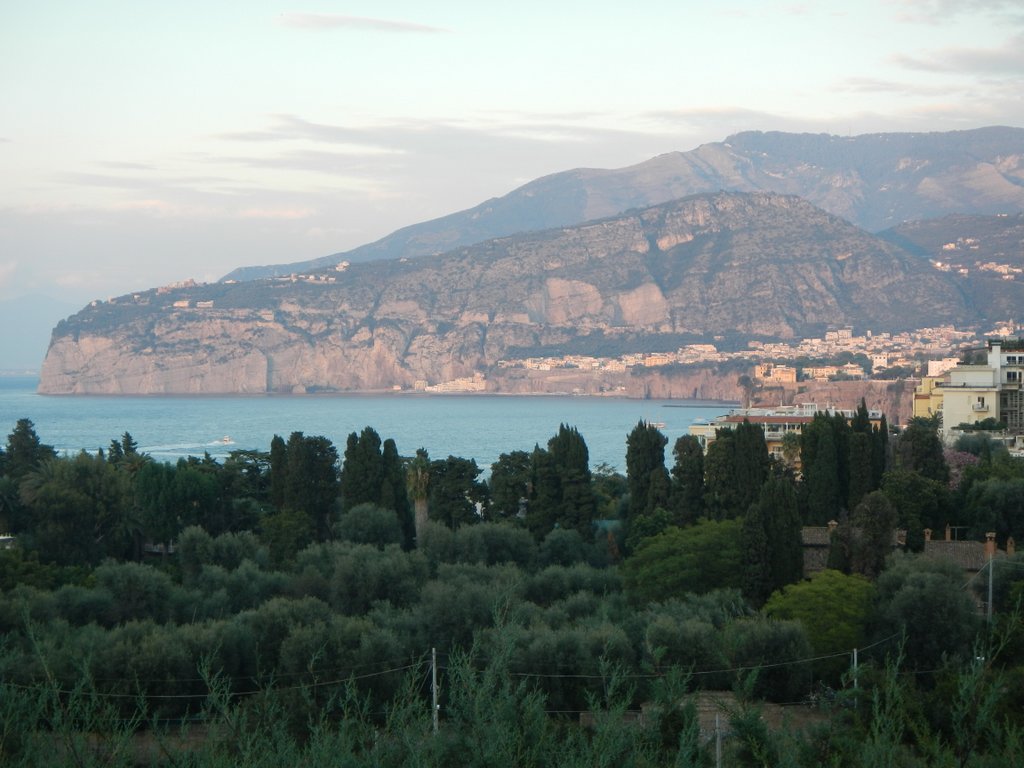 Looking across the bay.

I would spend the next five days here , relaxing walking the streets , sampling the coastal delights , enjoying the old city before the crowds flocked in carried by coach . On some days I would go to the local market get fresh produce and spend  the early evening in my not so mobile home kitchen preparing pasta delights or simply get a bottle of Chianti or a Brunello , pick up some cheese , cold cuts and some bringals  lustfully smothered in olive oil and enjoy the camp at the sea . It was just wonderful , this life on the coast. 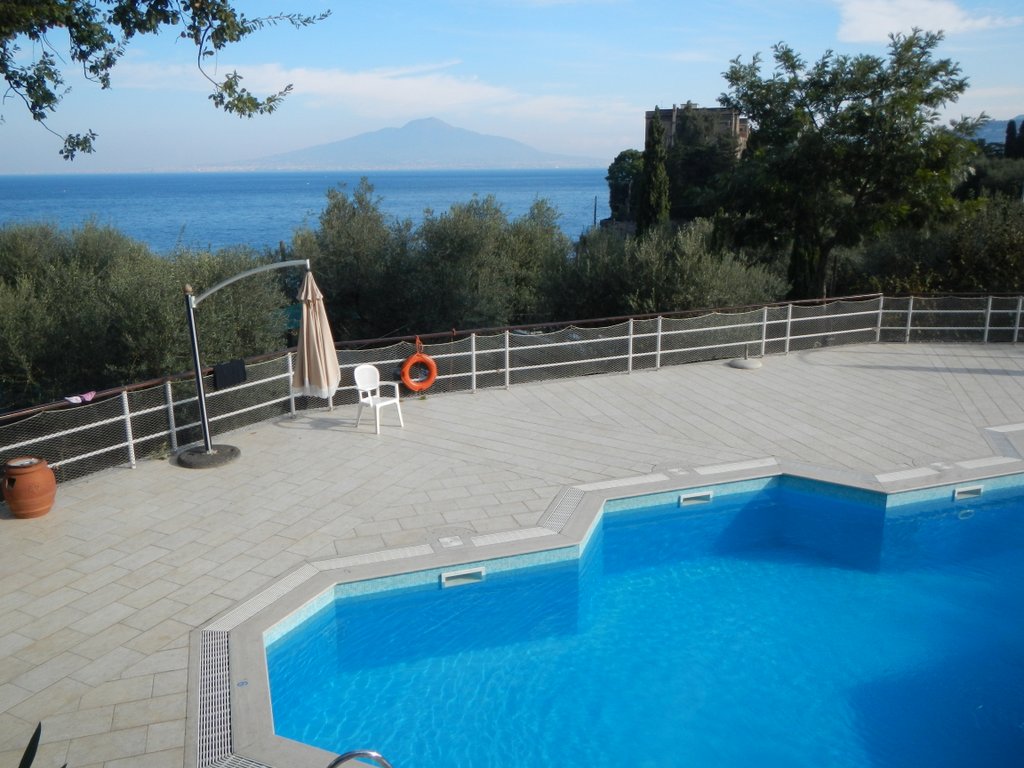 Pool with a view . 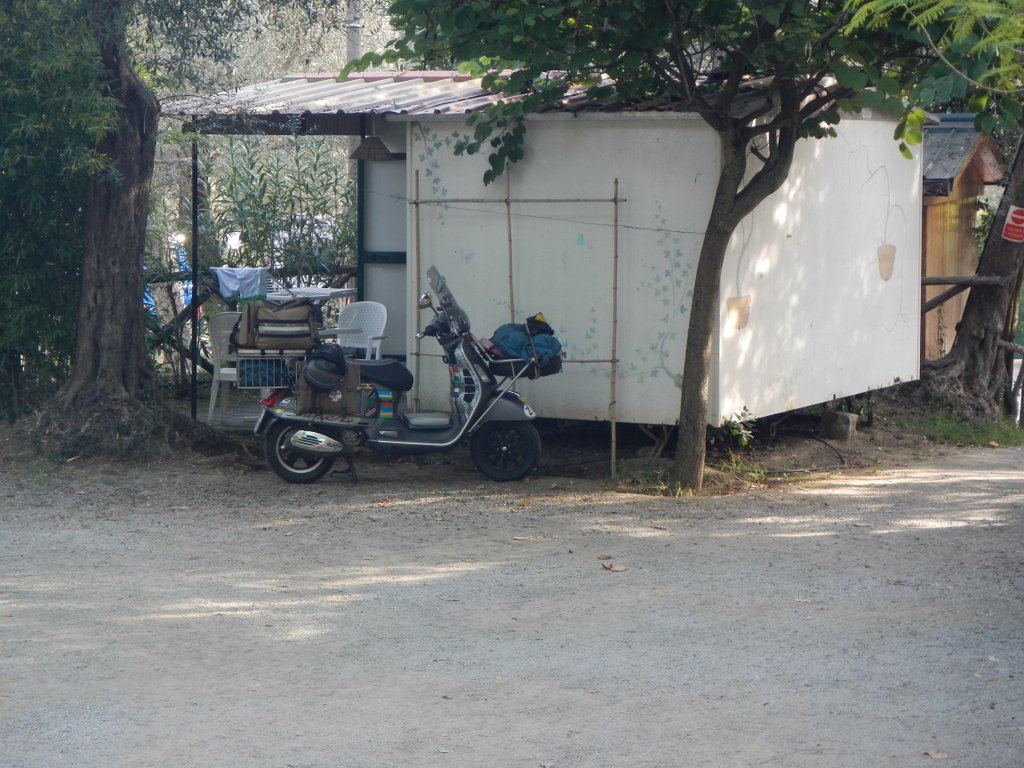 Not so mobile home.

As I strolled the streets I often wondered about  the Amalfi coast of old , the sophisticated Sorrento , where my mind ran old movies , of  the young couple in the  red fiat 500 racing the coast with a wicker basket full of romance , the elegant retirees  walking arm in arm back from dinner and a show , her evening dress moving with the gentle sea breeze , the strong scent of his cigar clashing with her perfume as their Italian shoes strike the cobbled streets , the Alfa spyder 1750 , dark blue , cream interior , he drives faster than he should , his hair in every direction , she sits enjoying the wind on her sun in Sorrento tan , her scarf keeping her hair in place , just a few strands escape the  protection of the silk , a near miss causing him to slow her to smile as they drive off along that coast of dreams. Couples on classic vespa’s trying to have a conversation above the scooter sound , smartly attired waiters bringing fresh Italy to the tables , the patrons pairing wine and food to open the door to 5 hour dinners , produce bursting with  natural flavour , the Amalfi coast bringing with it health and holiday . 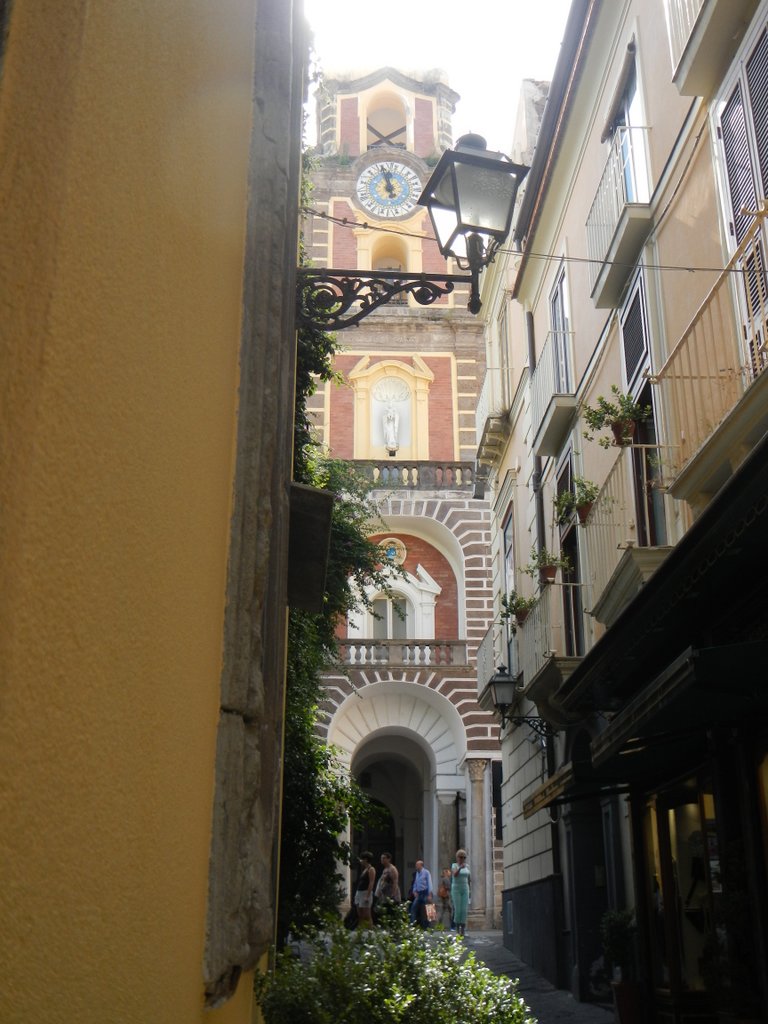 My minds moving pictures now blurred by lumbering  motor homes , coaches and croc’s , that make no sound as they coast the cobbles . Bars with names like the  Englishmen , pub life served with a dark long ale to those who just flew in from Heathrow , others with  skin pinched pink from the sun , Sorrento a place that allows couples to enjoy coffee and croissant with breakfast , and he sips on his  chianti at 9 . A cold beer or a misty gin seem a fine way to start the day down here while soaking up the sun , the English pub hours forgotten , so life passes me by as I sip on my espresso . 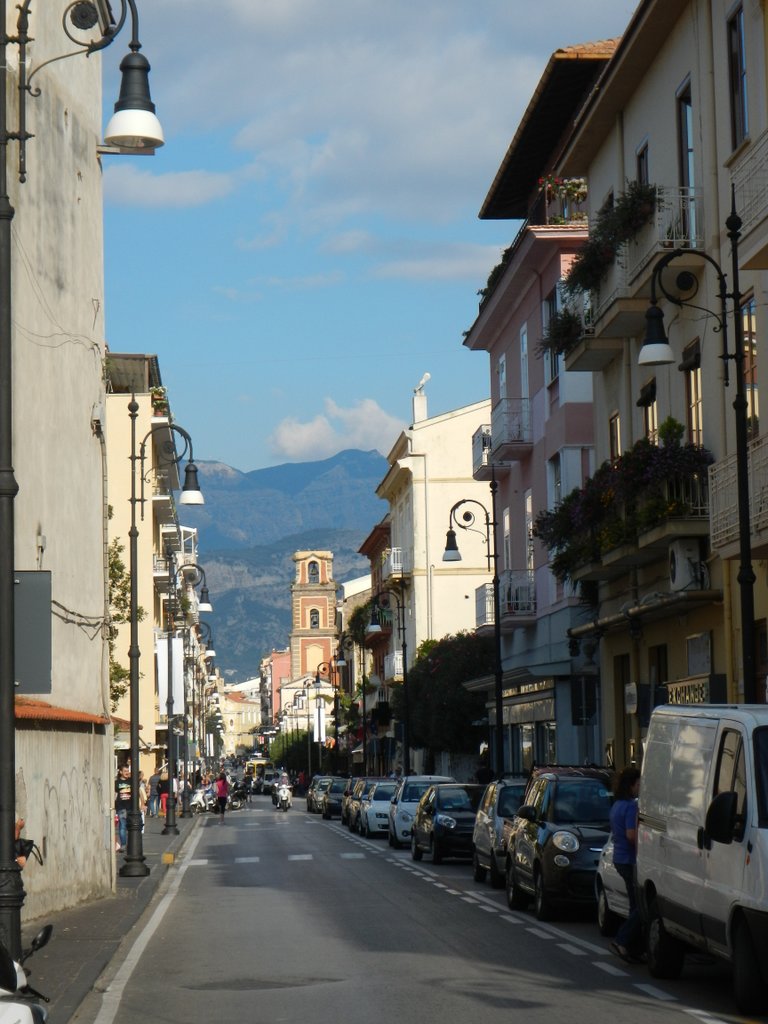 My walk into town.

Then my day saved by a horse drawn carriage coming through the old town , a glowing bride on her way to the church , the spectacular architecture comes alive , the streets full of smiling faces as she passes , the sound of the hooves , the wheels on stone , once again lets your eyes appreciate this beautiful town , I make my way to the tourist centre to find out were I can get some printing done  for my insurance application . 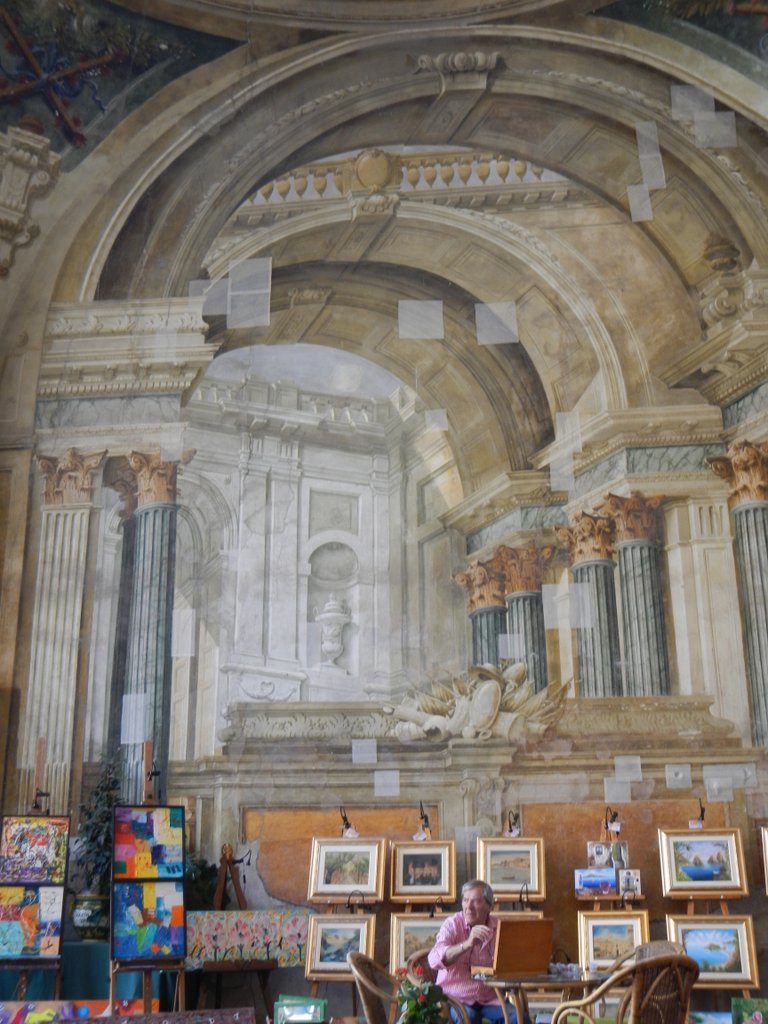 Once again Fabiola comes to my rescue  , onto flash drive and off to the printer , I have time to look around and observe  , the  centre full of questions , the staff so patient , so calm , I watch Fabiola jump between English , Italian and French with the ease that one turns the pages of an exciting novel , her eyes kind , her smile sincere , the silver in her hair not showing her age , but holding in it’s strands her beauty,  a continuation  from her youth . Was she the Bella Donna in the sports car ? the scarf holding her hair , so Sorrento of old returned to my minds eye to once again roam the Amalfi coast. 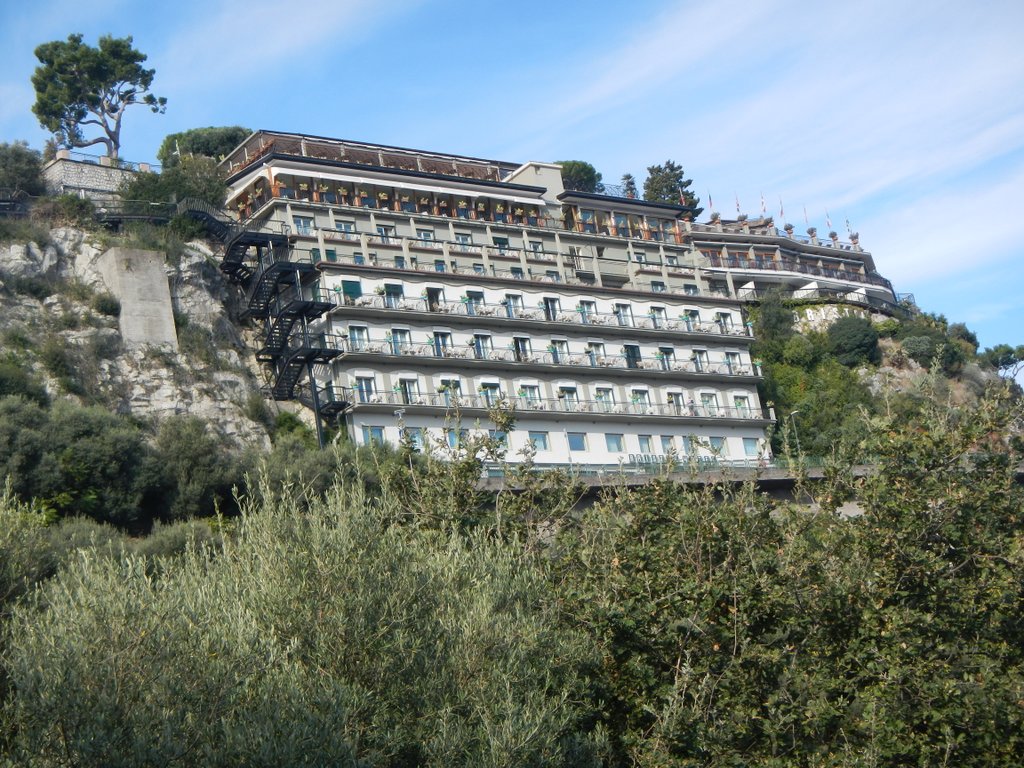 Buongiorno from the land of Olio, Balsamico & sooooo much more