Getting out of Luxor took longer than I expected , the reason being road works and to many one ways , confusing for both the GPS and  in turn me . Finally we popped out beyond the city limits  and the desert opened her arms to welcome us to the open road .  I was excited about todays ride , I was about take Vic and I up and along the coast of the Red sea. The last time Victoria and I had the ocean close was in  Swakopmund , since then our riding has been dominated by lakes and rivers with  the Nile both Blue and White dominating , so I was looking forward to that sea smell , the freshness of the  salt air clearing my nostrils of the desert  and dust . 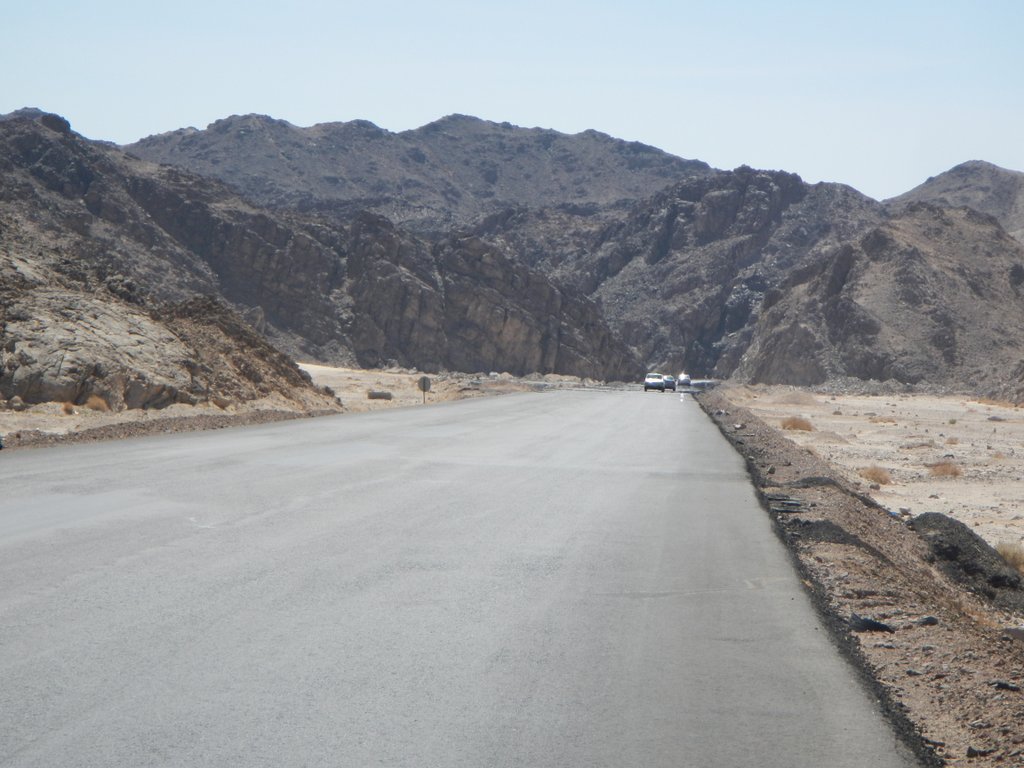 The road up to Hurghada was far easier than the previous days up to Luxor where one rides along the agricultural road , so when a dual carriage way appeared it was a feast for both rider and scooter . The ride  takes you through resort towns that follow the coast , some incomplete , some boarded up and others open but looking a little tatty and tardy , for what the lack of tourism has done . That been said the ones that had survived did look beautiful and inviting . 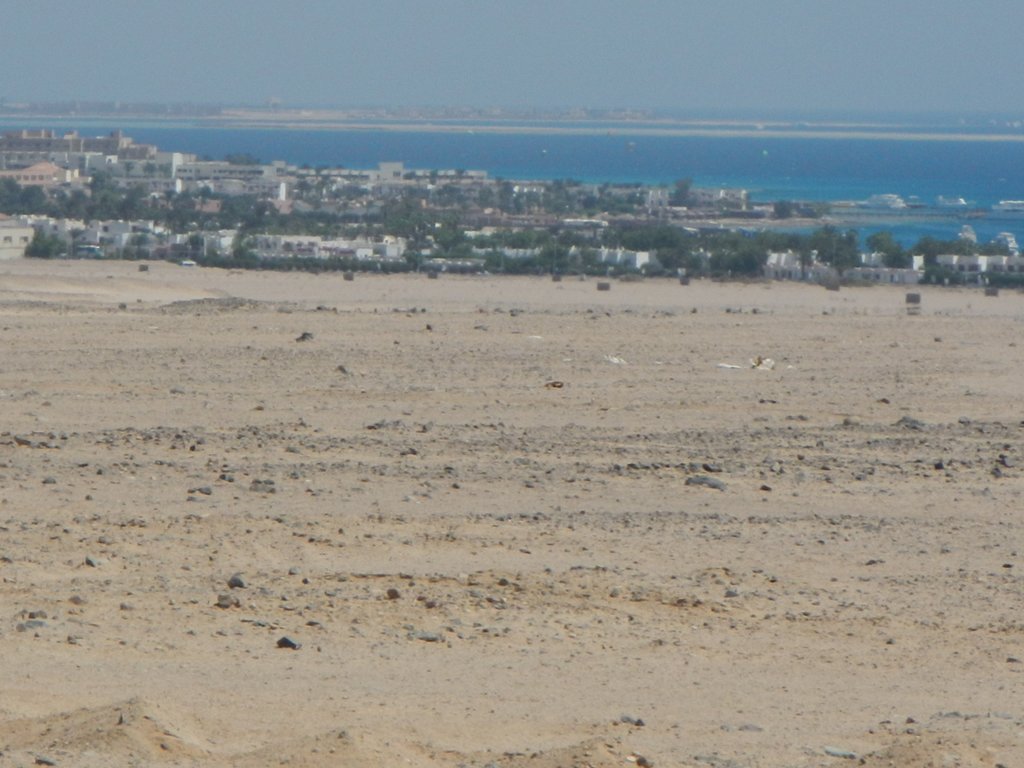 Our first glimpse of the Red Sea.

The ride was windy and hot , something I had become accustomed to , not to say that I enjoyed the hours of buffeting but I had been desensitised to both by this stage . With the dramatic drop in tourism and the economic principles of supply and demand , the local support had taken up some of the occupancy with incredible specials being offered to locals , so the beaches full of families soaking up the sun  , enjoying their Egypt . One cannot believe the number and the size of  these resorts , You get the feeling that there can’t be enough tourists or travellars to occupy all this space , but I had been told that before the crisis occupancy was very high , lets hope things return to their former glory soon , it is very sad seeing a coastline forgotten and falling into ruin. 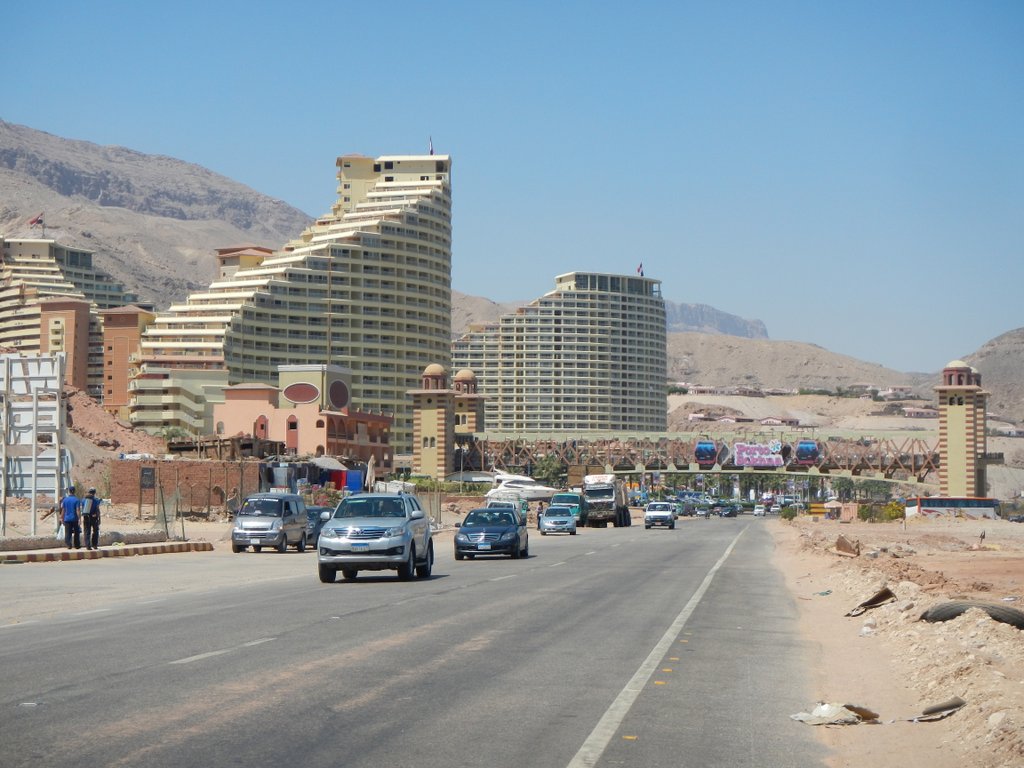 Hurghada had a very different feel , the town full of tourists , activity and had that  holiday town vibrancy  . I searched high and low for accommodation , but all the hotels in town had no off street parking so I had to ride back out of town to try and find accommodation at one of the resorts.

Finding a place for the night took me hours , the resorts have very strict security and if you don’t have a booking you can’t even get past security to find out if they have rooms available , eventually I was able to get into a hotel reception and finally get a room . It was so bizarre , I had to sit in reception , go online to booking dot com and reserve a room in the very hotel that only meters away was the reception that would complete the process .  Finally 5 hours after arriving in Hurghada I unpacked the scooter and made my way to the room .

What I found out later is that the only way these resorts have survived the crisis is to offer week long fully inclusive packages at extremely low prices just to try and keep their doors open and that nobody just arrived off the street , that is why I could not get into any of the resorts . I was a URO not seen in these parts for years .

I was issued with my water and tamper proof blue plastic bracelet and joined the all inclusive club .  Resort life in Hurghada is an education in itself and fascinating to observe , a  place that sports more ink on skin than not , some interesting , some dumb ,  a place that gauges manhood not by age or wisdom  but by the amount you can bench press , a place that allows  gravity to  play havoc with some body shapes and has little or no effect on the toned athletes  in leopard print  , a place that sports silicon both on the bodies and at the buffet with all the food tasting the same be it Italian or Asian . A place that tells time by restaurant and bar hours , a place that turns you red , not from the sun but the behaviour around the feeding frenzy that dominates the day , A place that serves wine from large metal vats  and on more than one occasion the food piled on plates resembled a circus act with it being humanly impossible to have so much on something with such a small circumference  , a place that loves  Pharaoh kitch , fluffy bikini’s  and themed parties ,  a place that tests the strength of buttons and fabric with every mouth full . So I sat watching the Russians and Germans united by booze and buffet , the international language spoken being gluttony , my eyes not used to what materialised before them , Africa had shown me a very different picture of life as I travelled her lands , this was something I had long forgotten about , how we in the west want and waste , my eyes and mind turned and for the first time in a long time I felt my ability to be understanding or accepting fade only to be replaced by a critical eye and anger at this vulgar display before me .

I spent the rest of the time hiding  in my room resting or enjoying the odd movie , trying to escape the show outside . Had my journey made me accepting of so much , yet an inability  to accept this . Observing the world through  an accepting eye that is not critical of what is different shows true maturity and a little wisdom , yet my response to what I observed disappointed me in that I forgotten to remove the critical lens before observation .

So the sun set on resort life and I prepared to ride once more only one night away from crossing onto the Sinai Peninsula .