The morning in Aus was clear and still with the only movement coming from the staff setting up for breakfast. The mopping of the never-ending fine Namib dust that seems  to find its way into everything . That been said, it does give the country beautiful colour at sunrise and sunset. 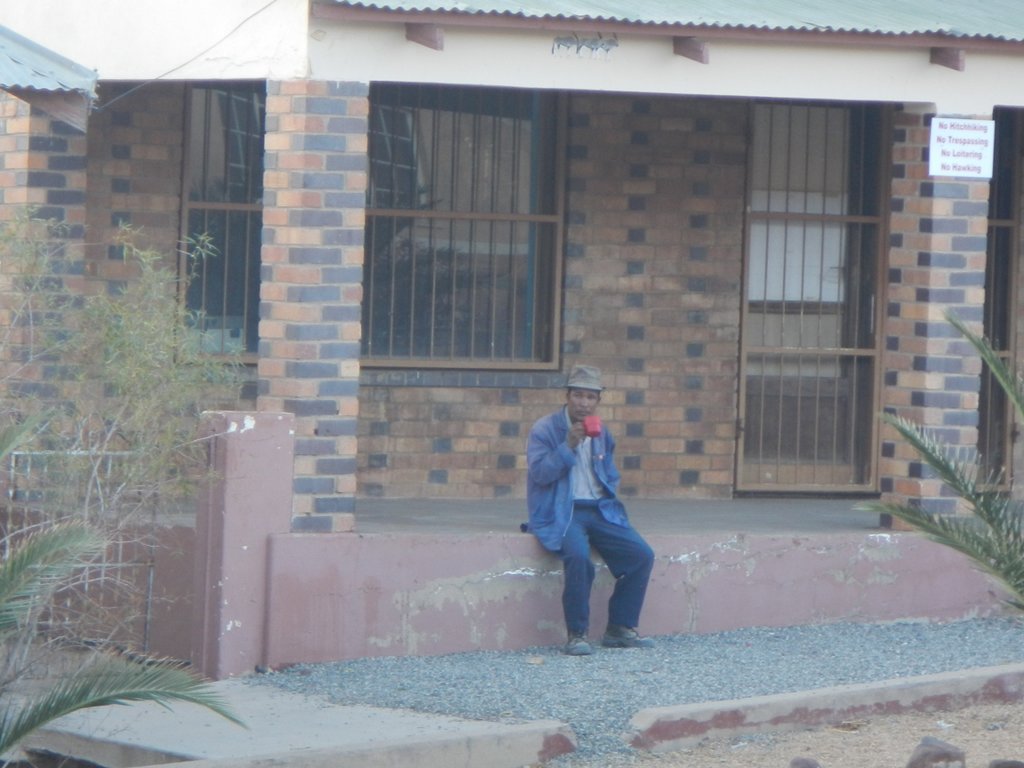 My aim was to get to a place called Sesriem to spend a day in the Sossusvlei. My GPS said it was around 340 km away,  so well- fed Vic and I set off for Helmeringhausen –  a mere 100 km down the drag . Off to the  C30 we rode. 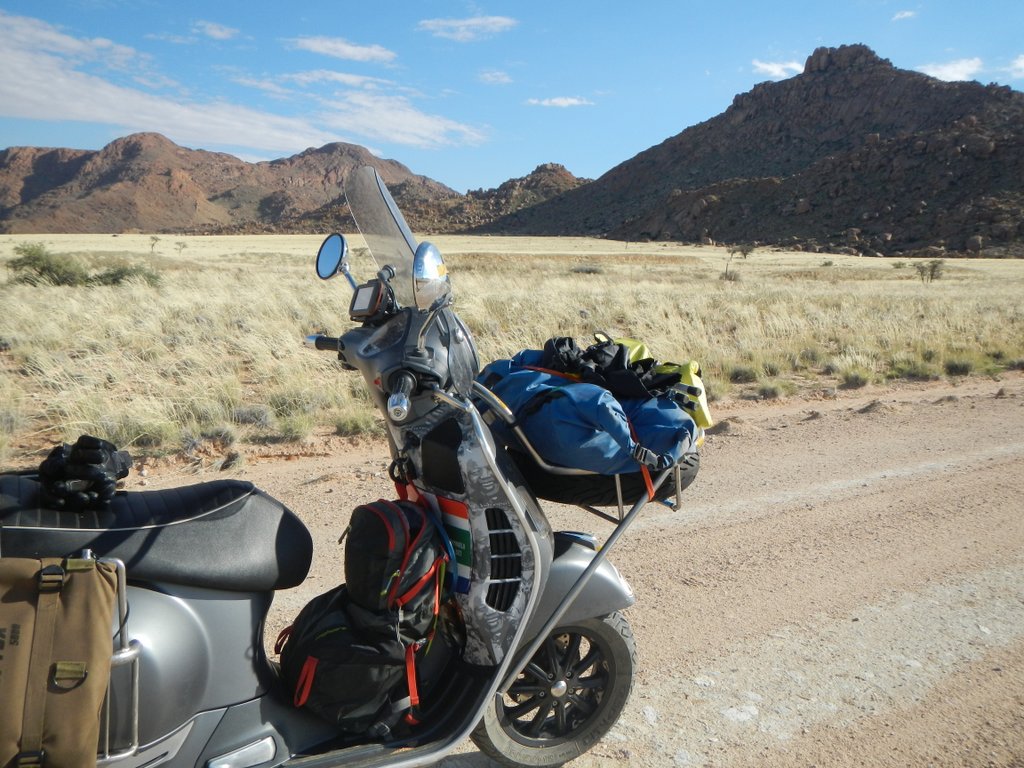 The road conditions took a turn for the worse and I finally arrived at 10 am after leaving Aus at 7.15. Here I filled up with fuel and took on a bit extra  after hearing from Bjorn,  the proprietor of Helmeringhausen Hotel,  that my planned route was not an option on the Vespa! We had coffee and a chat and he also gave me very valuable information on my tyre pressure… 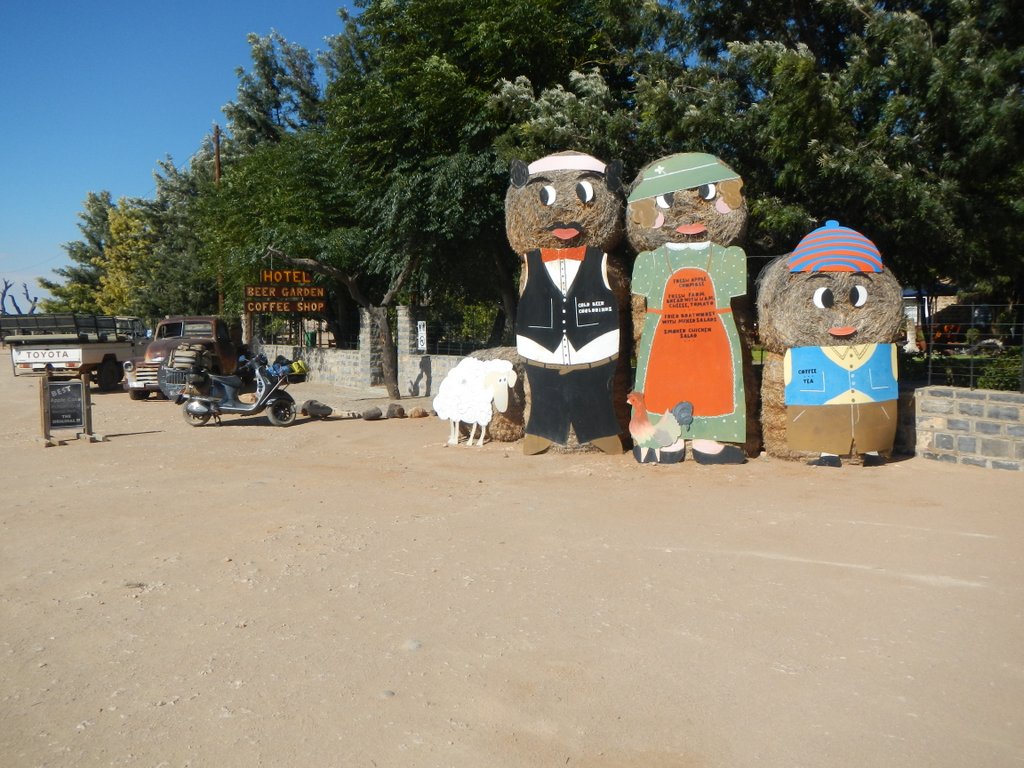 I changed my route and headed up the C13 to the C19 to go through the splendour of Tsaris Hoogte Pass. With the pressure down to 120 bar on the front and 160 bar at the back,  the road was far more pleasant and I was making good time . About 20km from the pass I was pulled over by the police, not for speeding mind you , but for the fact that the pass was closed because a truck had jack-knifed . They assured me  that Vic and I would easily slip past . Oh the beauty of Vespa ownership.

From dust to dawn 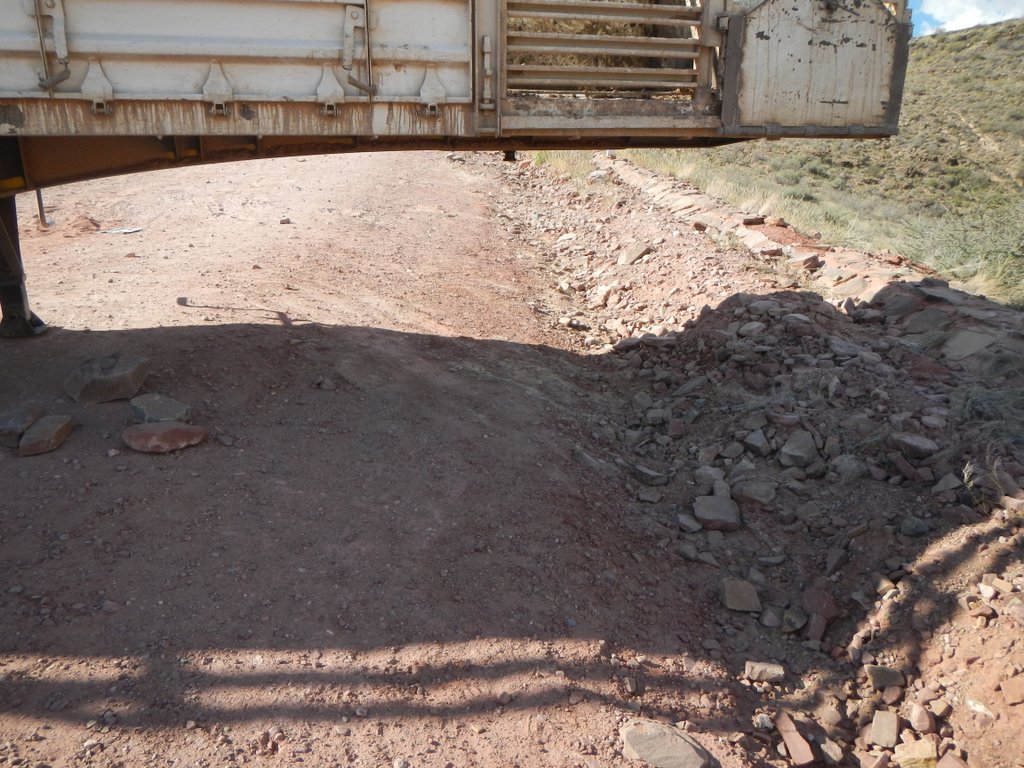 Mind the gap ,I had to get the scooter squeezed through.

When I arrived on scene the entire road was blocked so I had to unpack the scooter;  and with the help of the stranded driver managed to get past and on the road again. 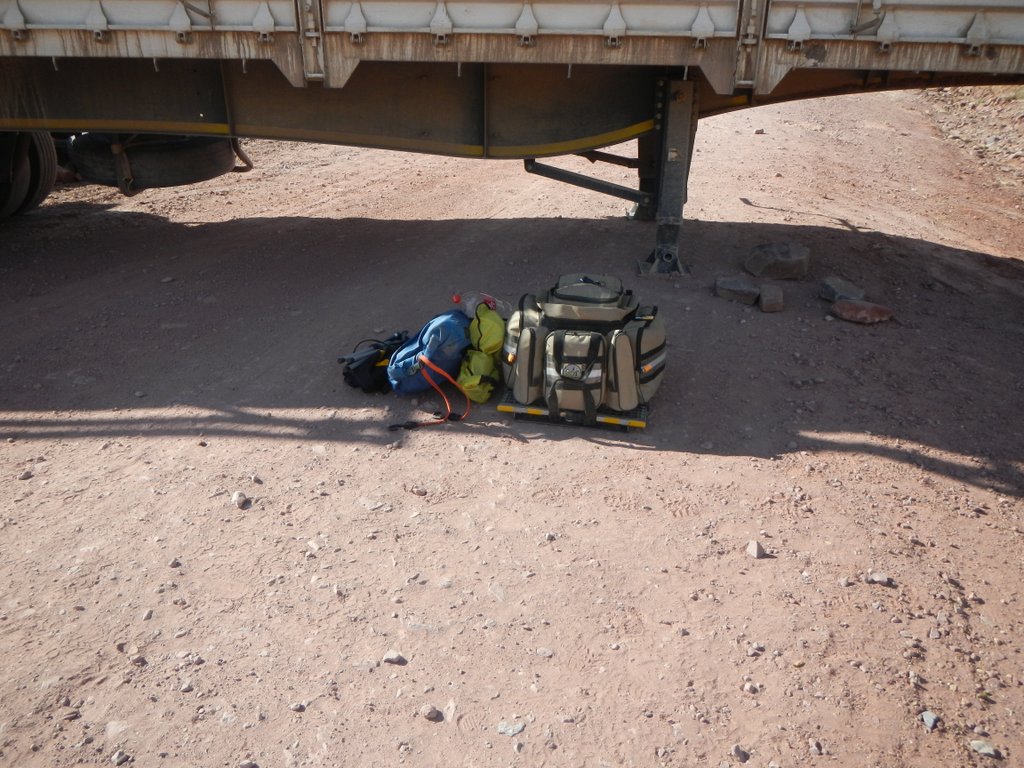 We all have baggage 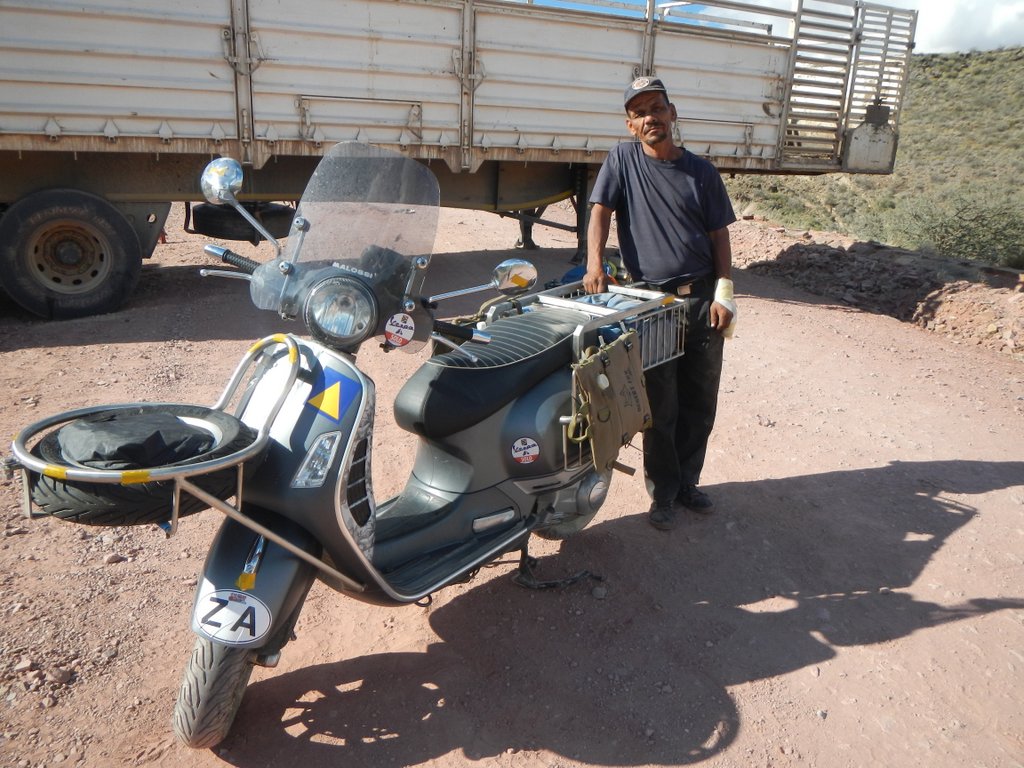 The very kind helping hand, even though he had injured himself in the accident . Without him I would never have got through

I left my roadside companion with food , as he had been stranded for almost 3 days. I was off again to enjoy the spectacular scenery all around me. Taking this route was really lifting my spirits after a long day on the bike . 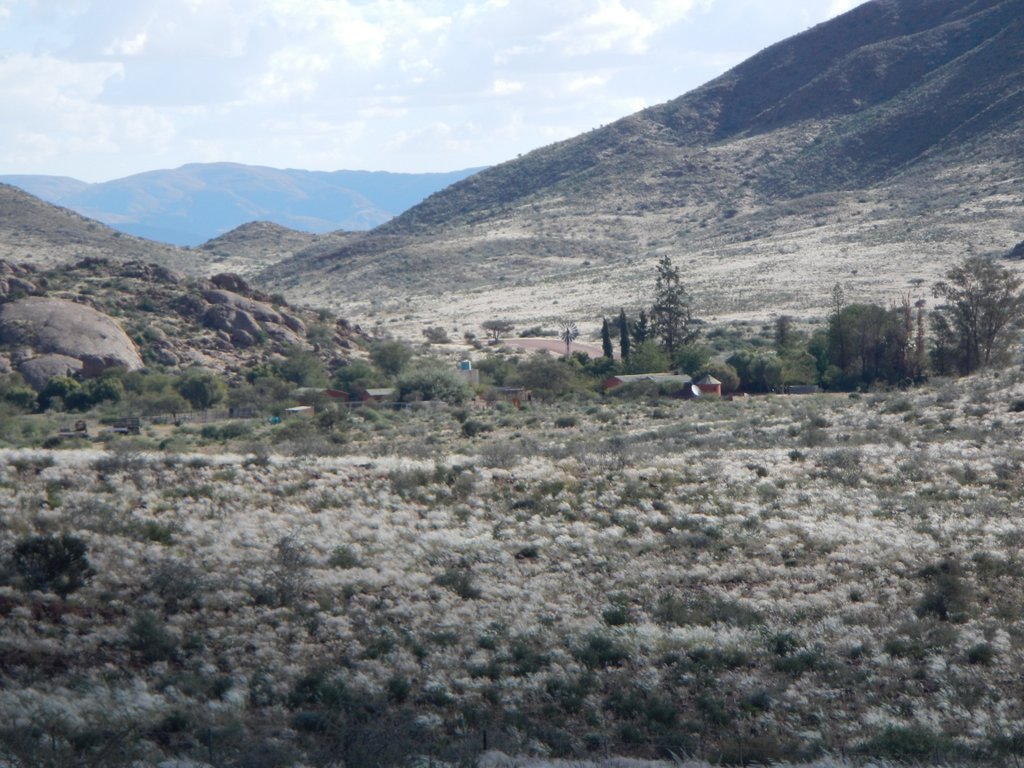 Due to the fact that the road had been closed,  I had been riding alone for a couple of hours  and really enjoying the scenery. The road was comfortable at around 40 km per hour and I was surrounded  by the beauty and the  peace of this  place , so much so that I took the wrong fork in the road . I was supposed to be 60 km from my destination when I went left not right. Being so immersed in my own thoughts,  I just kept on riding thinking I was almost home .

I came to an intersection , checked the GPS and suddenly I was a 150 km from my destination , the sun was still high and my arrival time was to be 5pm. The road up until this point had been good so I pressed on. I was now riding through the Namibrand nature reserve. Just so beautiful. The game sparse,  but the colours mind blowing . 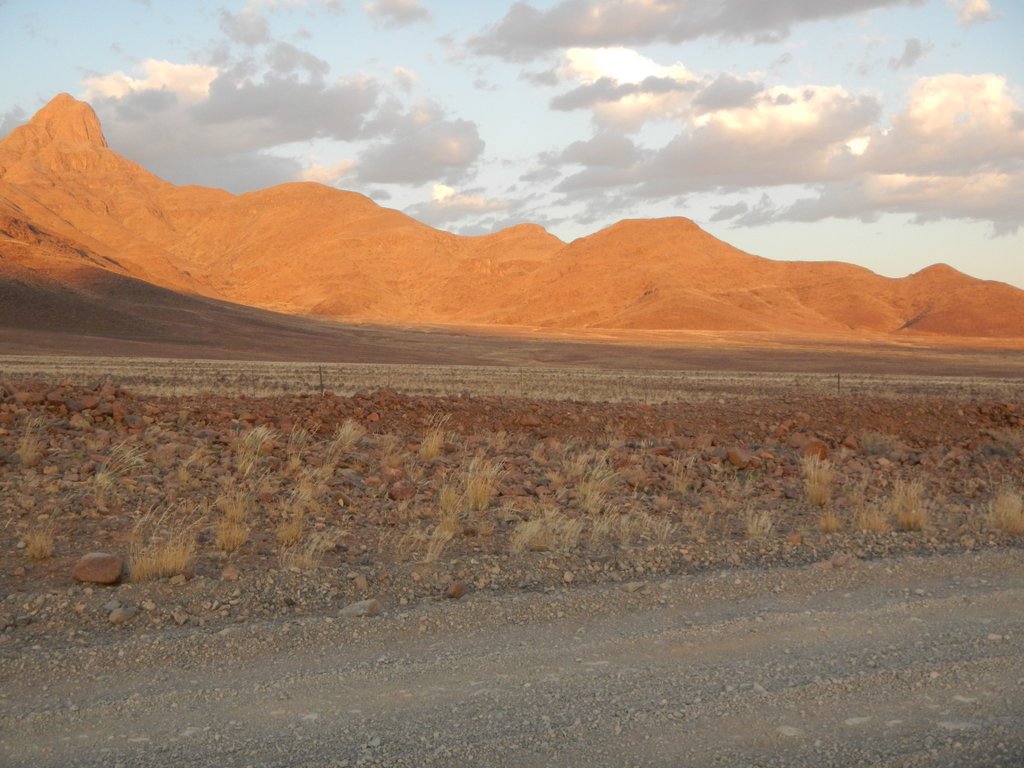 The road turned really nasty around the next corner and Vic was finding it impossible to stay on the road. I took the tyre pressures down a bit more. The corrugations and sharp stones got us down to speeds of between 10 and 20 km per hour. It got so bad that I took the pressure down further – the front to 45 bar the back to 80bar . The handling improved but the speed lowered.

The scooters wheels where turning much slower than the setting sun  and time was not on my side. The setting sun was breath taking  but that extreme beauty was lost in the panic of not getting to a place for the night. I was exhausted after being on the road for over 10 hours. Suddenly my companion of light left. Darkness fell. Let me just say one thing : black can get blacker. So  so slowly  we pressed on . I came across the staff village of one of the luxury  lodges. The  lights from here seemed like angels suspended in the dark . I rode in and asked the head if I could pitch my tent. He phoned the lodge I spoke to Paulo the manager and all was well in the world again . David showed me around and invited me to come and watch some soccer once I was set up.

I found a place out of the wind,  got out the petzel and was halfway in setting up when Paulo arrived to say that he had just been informed that due to a problem with a rider earlier the lodge had banned all camping on their land.

Paulo kindly offered to take my gear in his cruiser and I could ride in his lights to the next lodge about 10 km away.

Off we went. It was like I was on my own private game drive. Riding slowly out into the night allowed me to see quite a bit of game.  I enjoyed the drive to what was going to be a wonderful nights rest .

The lesson learnt and a little confidence gained, all in all the day turned out to be one for the books . The lodge I stayed at turned out to be fantastic with great accommodation and very warm staff. I slept like the dead… only to wake to the most beautiful sunrise and what was to be a great seventh day on the road. 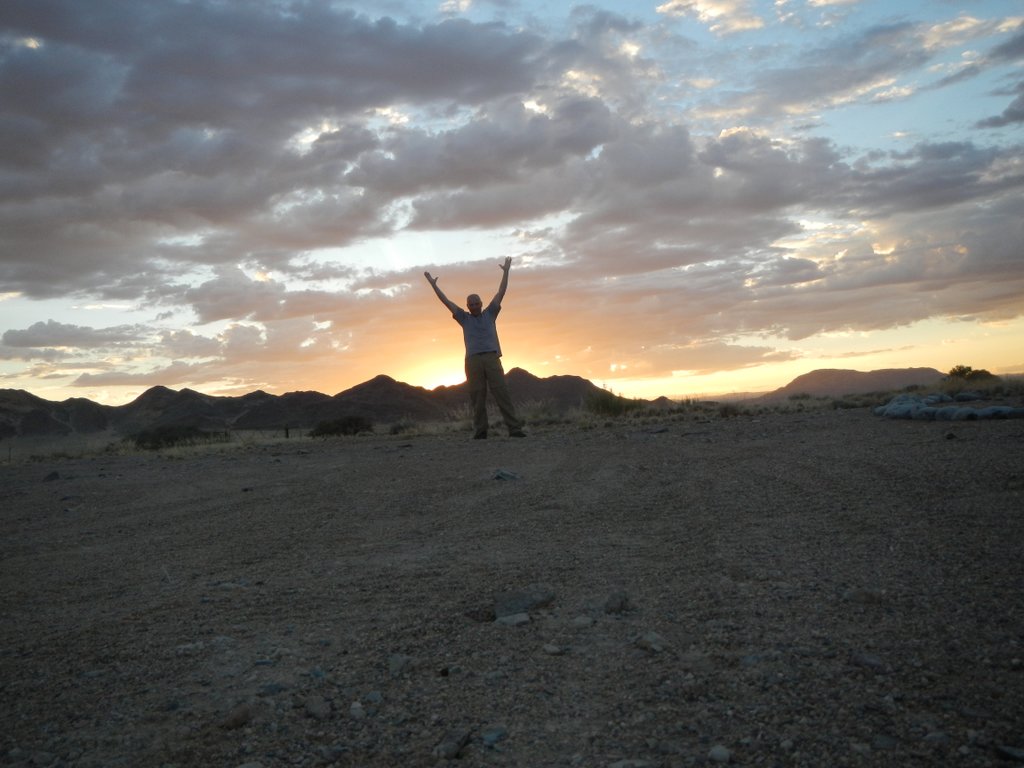 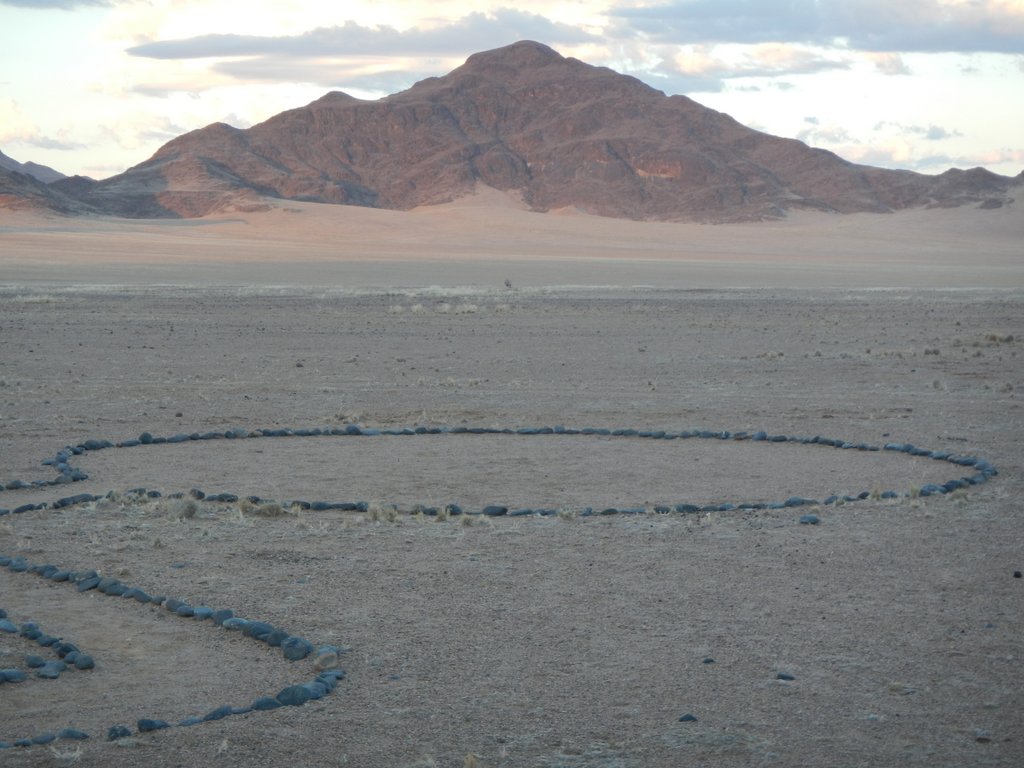 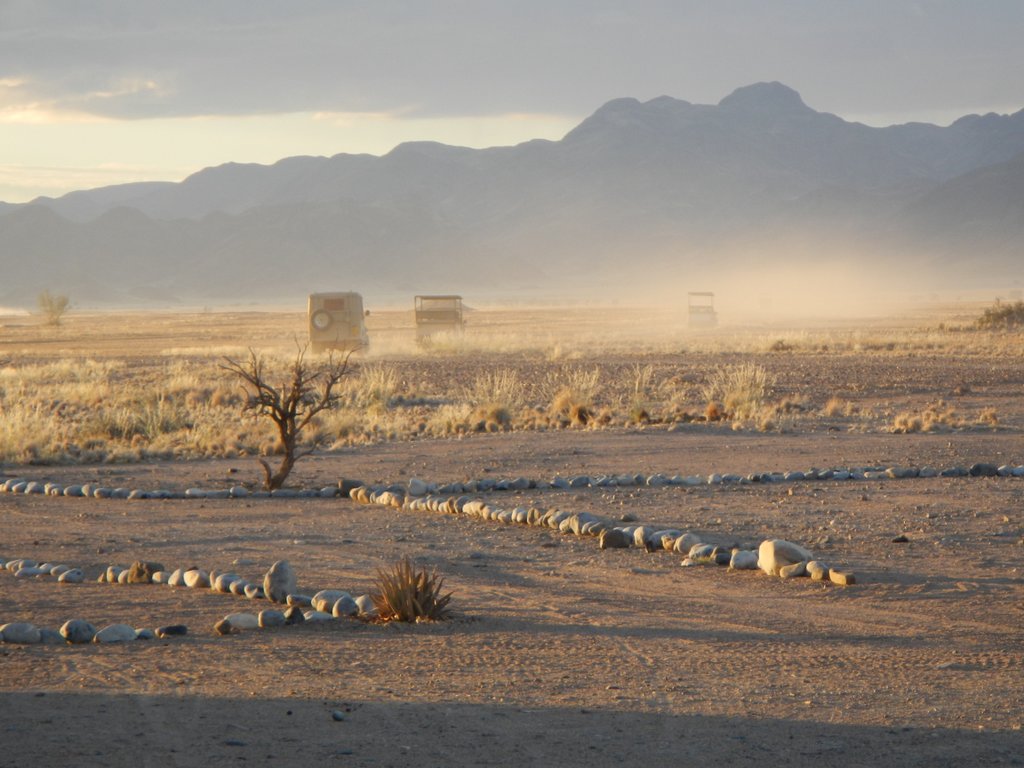 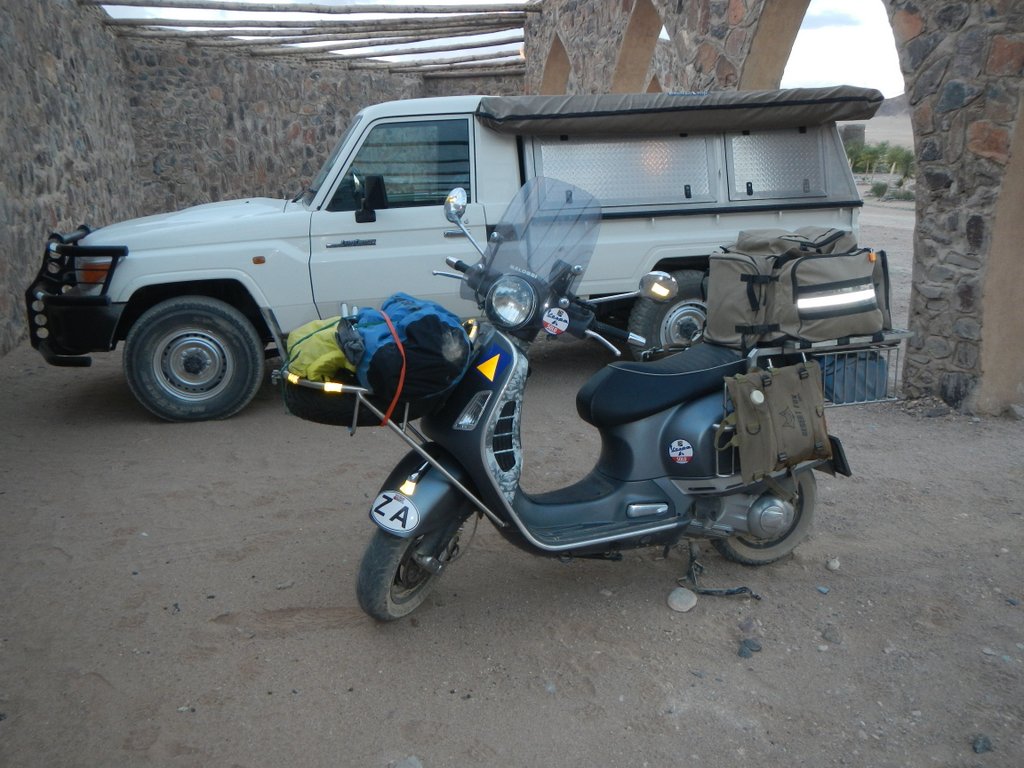 Vic with her land cruiser issues. 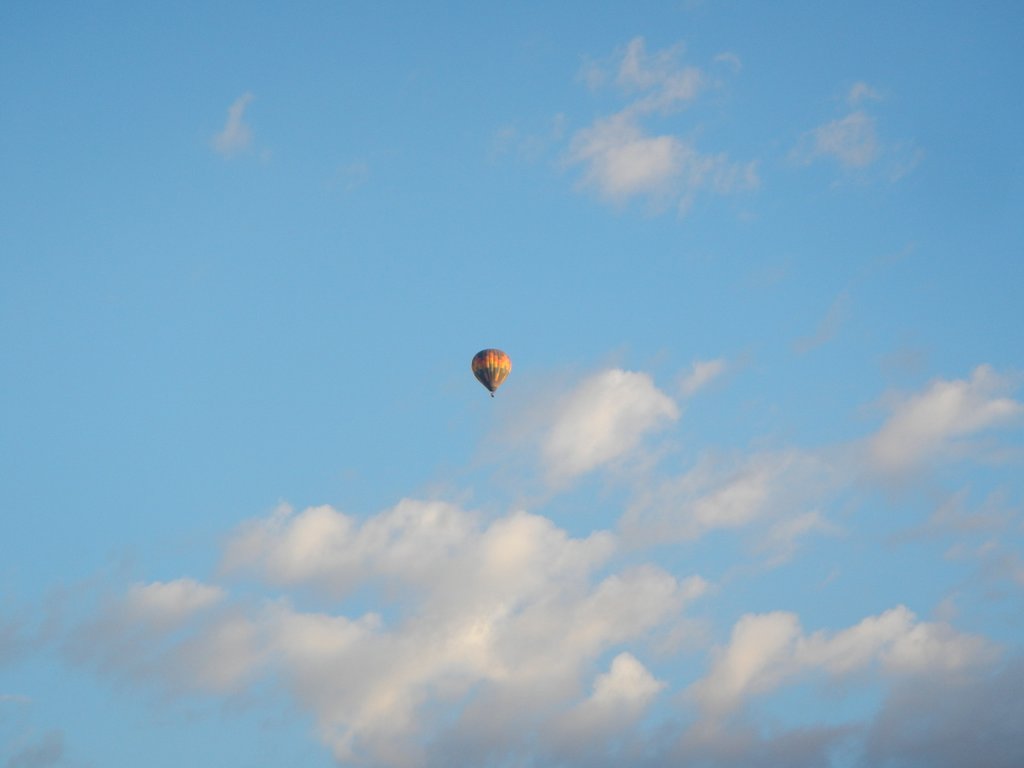 I arrived safe in Sesriem and I am off to the Sossusvlei tomorrow then on to Solitaire and then Swakop for some R and R.

Below is my home for the night and the guys who run the site, hope you enjoyed the update! Until we meet again. 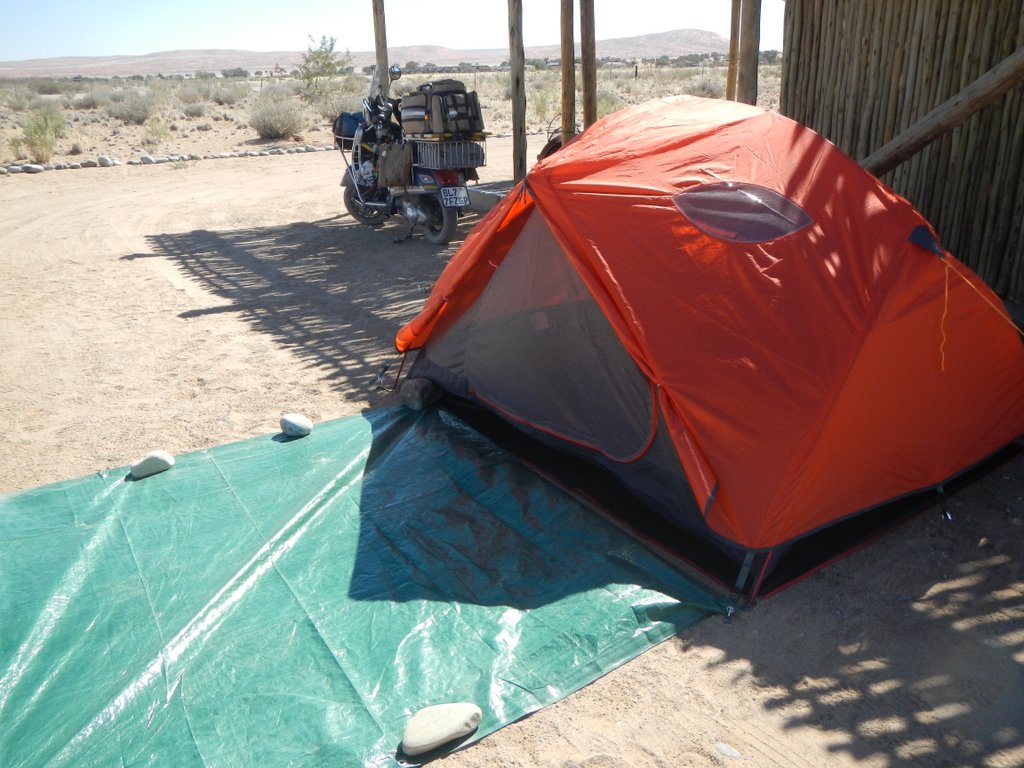 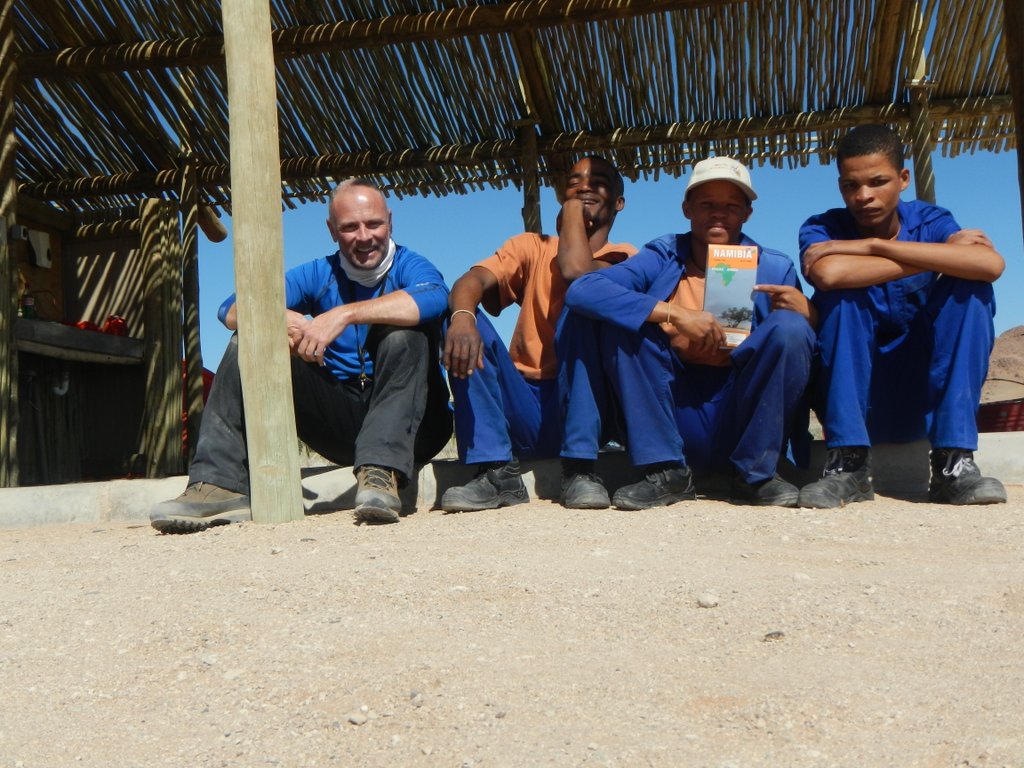 The Falls full of wonder and Zambia smiles