Morning breaks ,  Kigali awakes , I sit coffee in hand enjoying the tranquillity before the city comes to life. 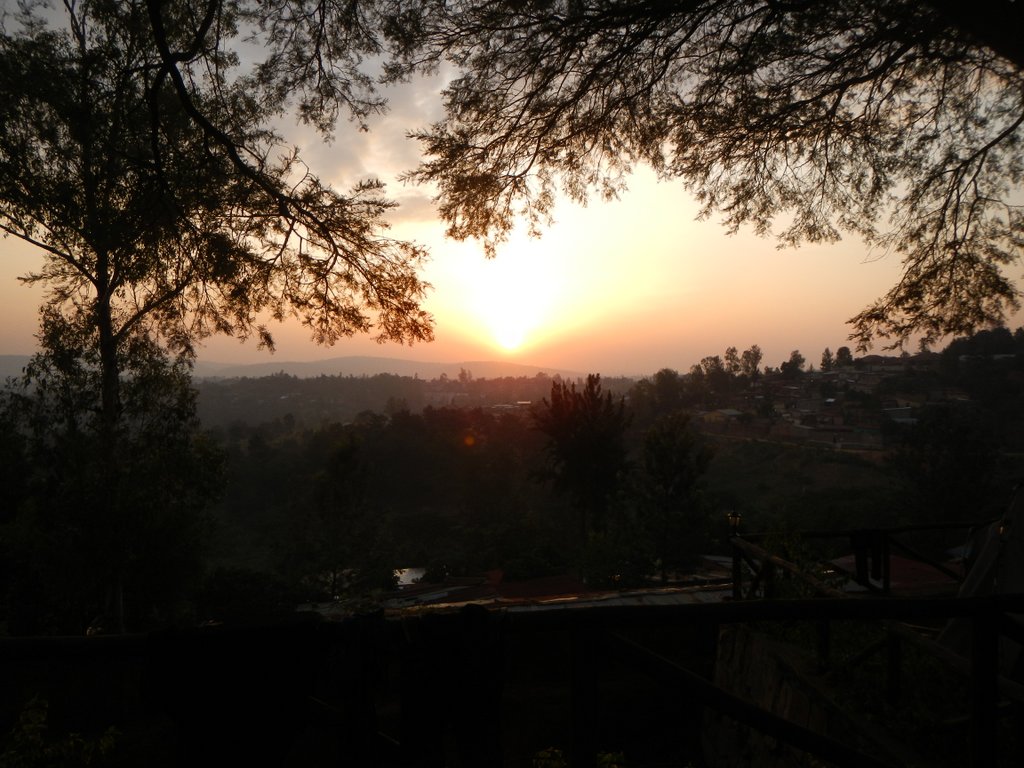 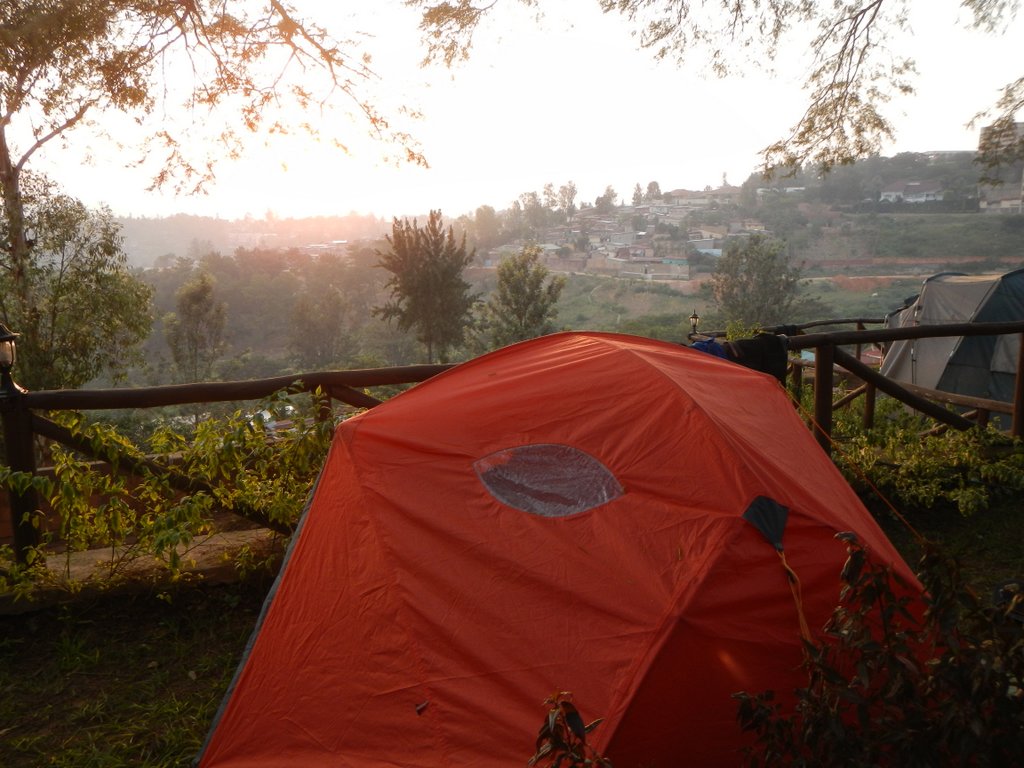 My camp site had an amazing view over a part of the city , so I rose to the morning light , had some coffee and watched the daylight bring the city to life . I had arrived on the eve of Umuganda which is a day when everything is closed and all Rwandans meet and clean in and around their area  and it lasts from 08h00 until 11h00 on the last Saturday of the month. I had met Safari the previous evening who had been living in Kigali for the last 10 months , returning to the country of his birth from his life in Belgium , Safari is his Rwandese name so given to him by the locals. We decided that we would go down into local village to join them for Umuganda.  Armed with bags , brooms and one machete we headed down the hill to join in on the big clean . On our arrival there was much chatter around the mzungu with bag and machete in hand . Out of a group of around 50 people it was myself , Safari and about 4 locals cleaning house so to speak while the entire village stood around amused by our efforts . Safari explained that this area is so poor that it basically lives on the fringe and the wealthy Kigali rises up from the valley to look down on their lives from above , so forgotten and destitute Umuganda does not feature as a priority in their lives . We worked for around and hour and after a while  it started to feel a little uncomfortable so we decided to go and clean  the streets closer to the main road. 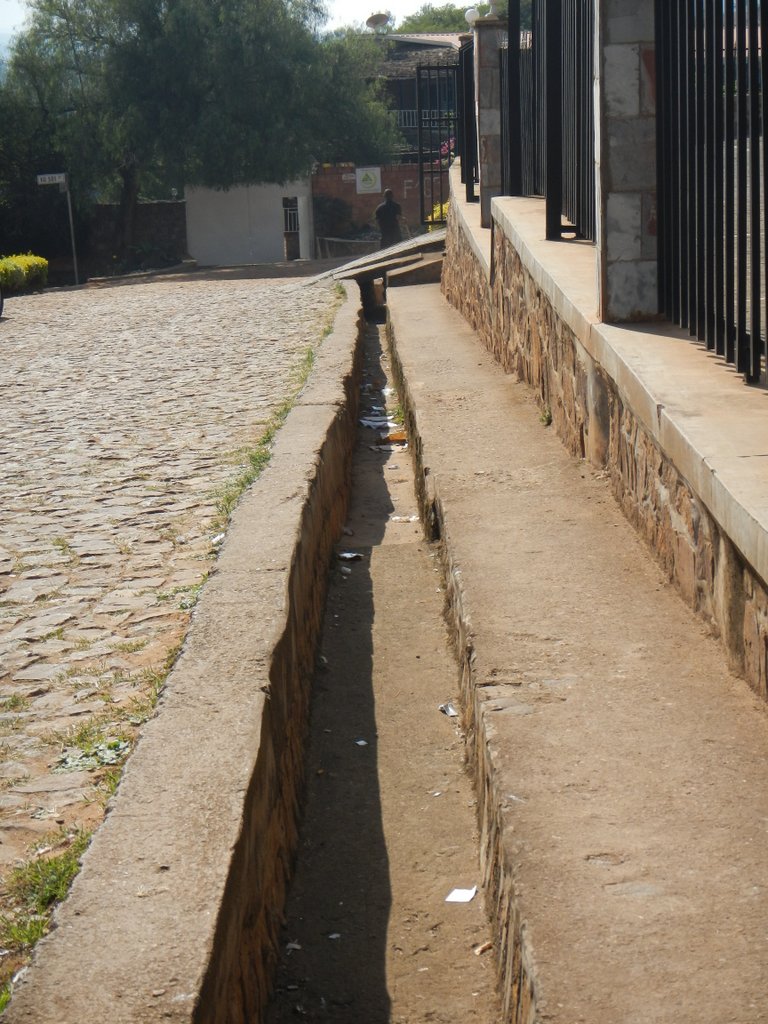 After our efforts it was shower time and now that all was open it was time to explore the city , and wow what a city it is , it felt like arriving in America after the places I had travelled through. Kigali is referred to as ” Africa Lite ” , an African experience with out all that is African , so the westerners apparently get their training wheels here or so I was told by the locals. Kigali is a really beautiful city built on hills and in valleys , it is nothing like the picture your mind paints for you prior to your arrival . It is really advanced beyond expectation , beautiful tree lined streets designed for walking , manicured parks , great shops and restaurants filled  with really wonderful , helpful and proud people. 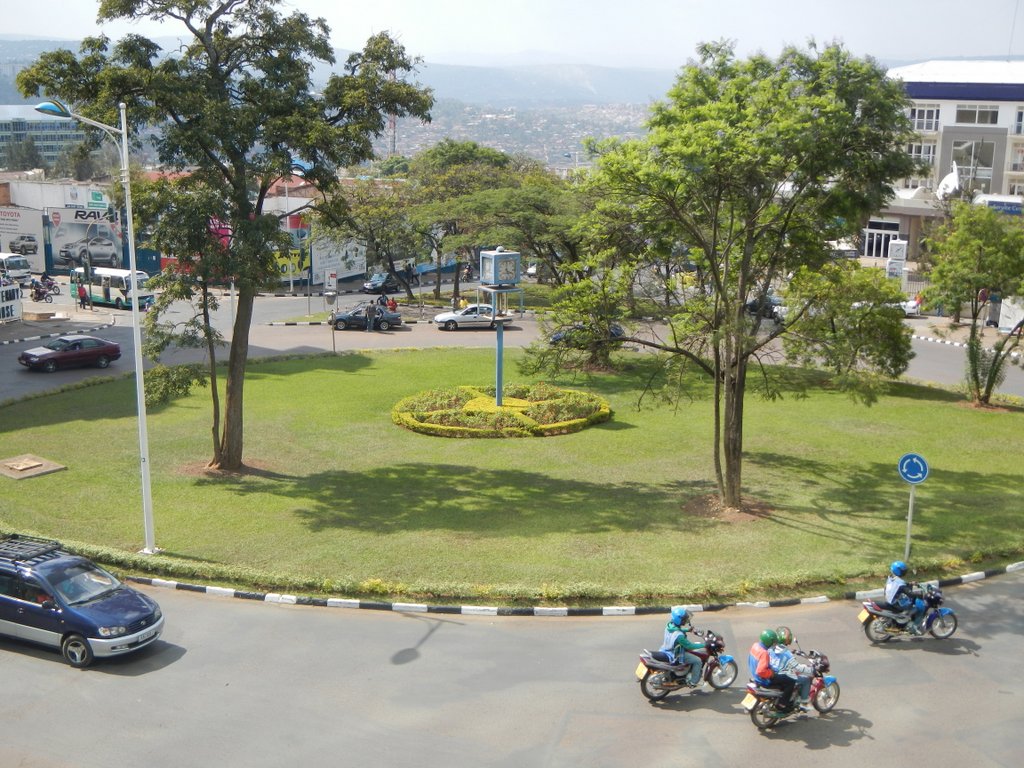 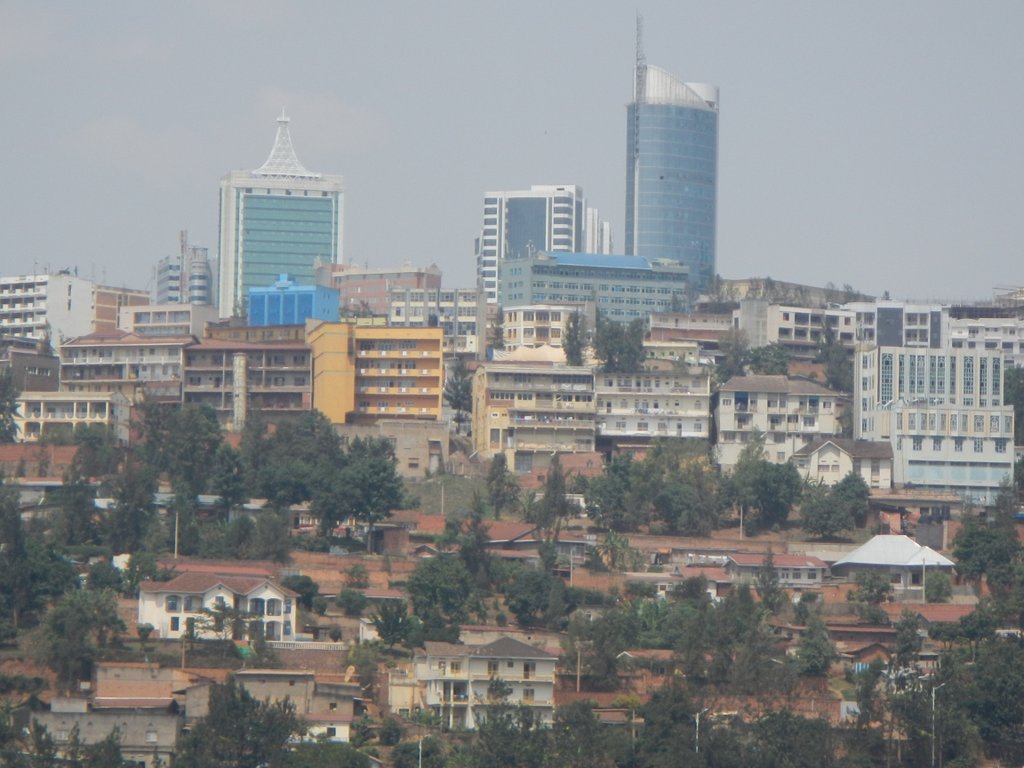 I spent the next couple of days exploring the city , going out to the various genocide memorial sites including the churches and the actual memorial in town. I don’t want to try and put  into words what the experience is like , needless to say no words can describe what you see and feel from the core that makes you human . I salute all Rwandans for what they as a people and a country have achieved over the last 20 years , my respect and admiration for you will forever live in my heart . What a nation. 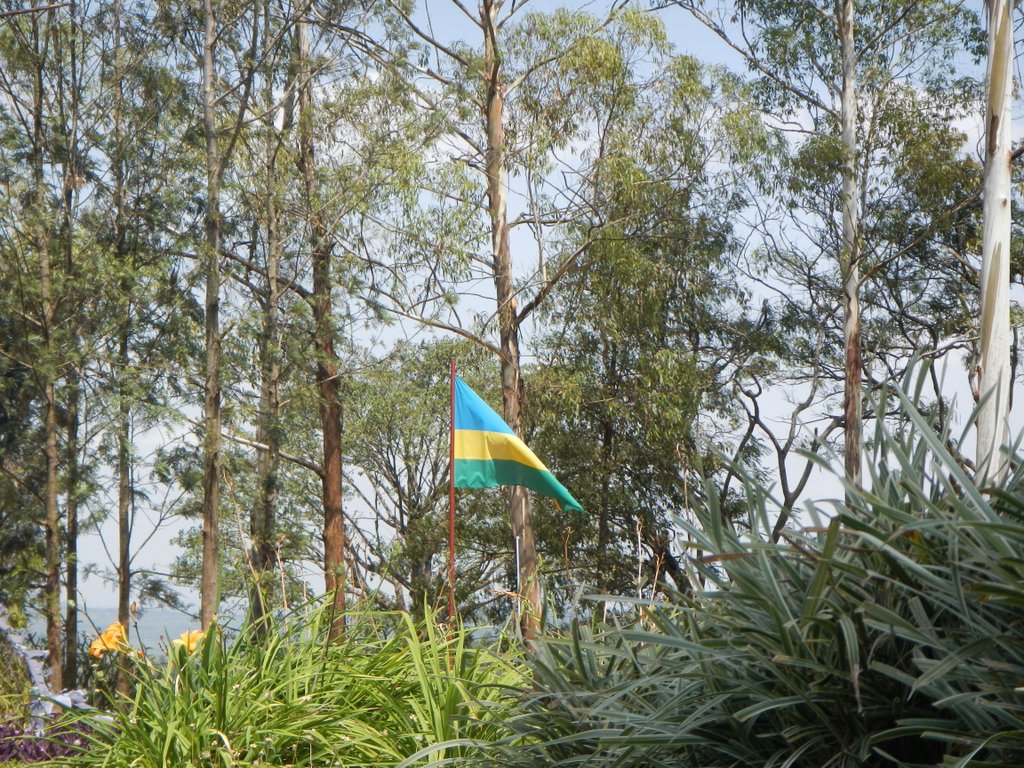 On they way back from one of the memorial sites I came across a school that was established  by our late great Madiba , so Victoria and I pulled off to pay our respects . After my time at the memorial it felt really heart warming to come across this sign , so far from home , yet just seeing the sign gave me a sense of comfort  and lifted my spirits momentarily . 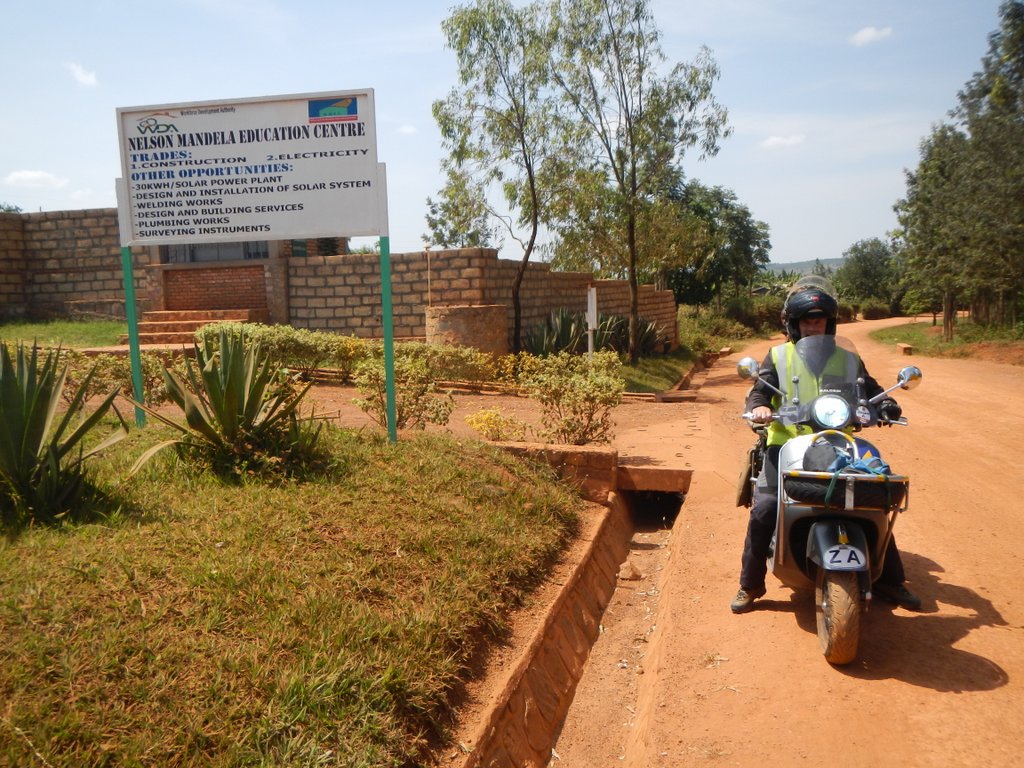 Along the road from Kigali leading out of town I felt Victoria give a shudder , I was a little confused and worried but when I looked up from the scooter I understood , not something a Vespa wants to see on the side of the road. 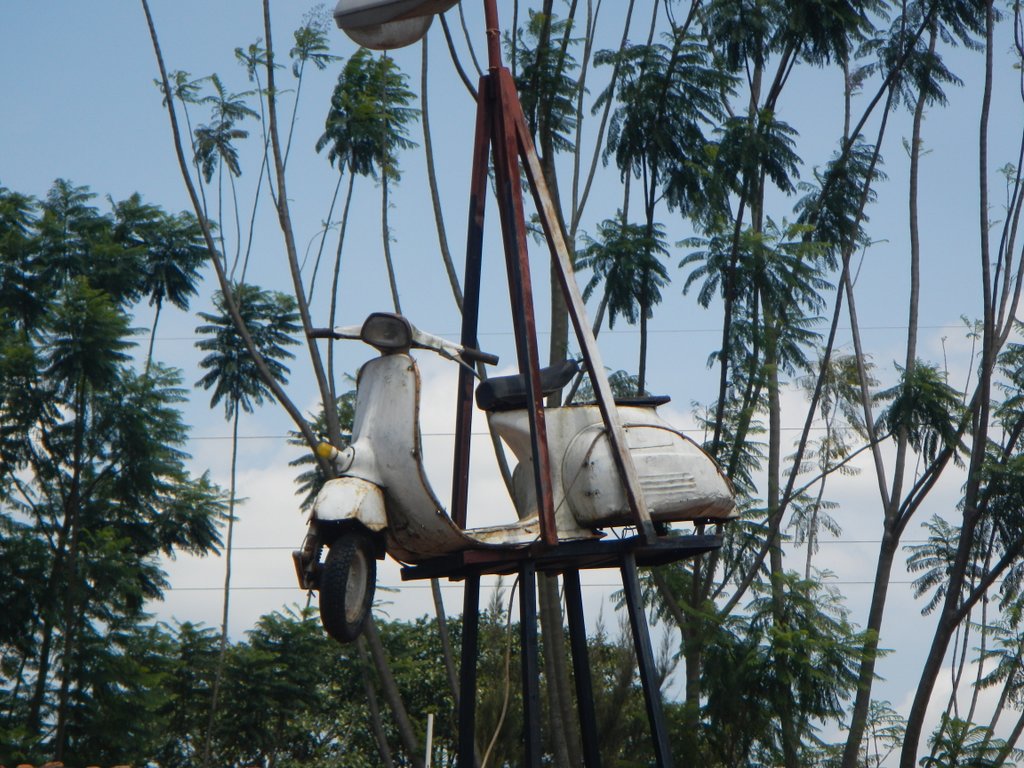 What happened here I wonder? 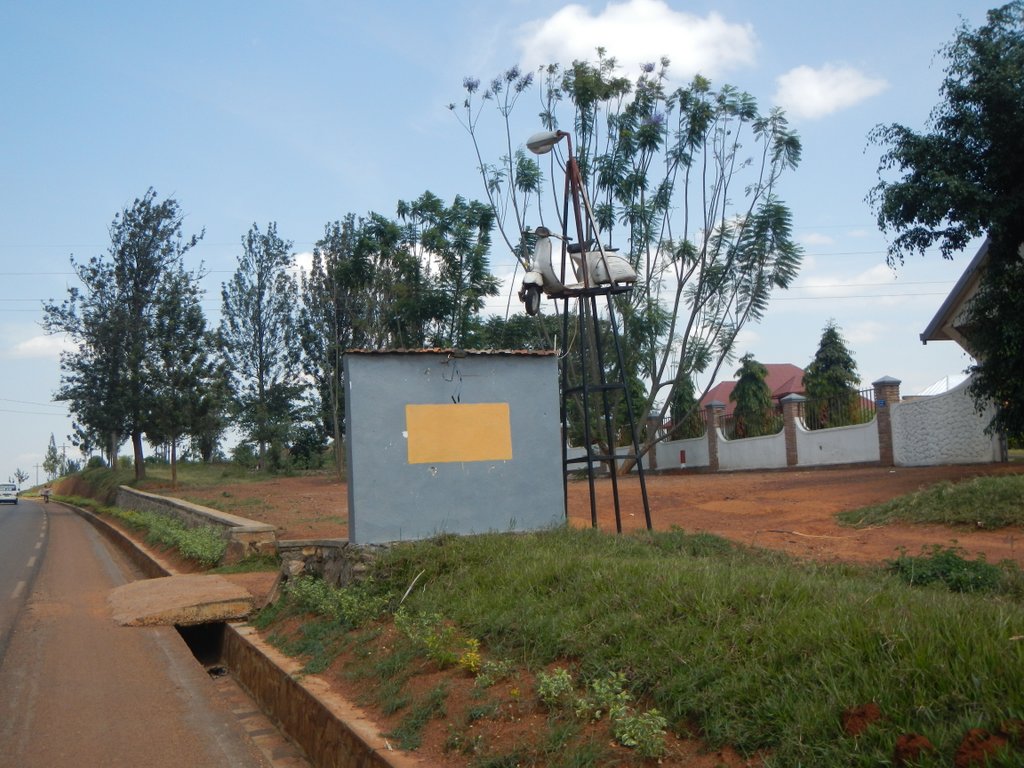 Later that afternoon Safari and I went on a walking tour in and around parts of Kigali , he wanted to show me first hand the massive discrepancies that occurred  just on my door step , so we started in one of the poorest neighbourhoods and made our way to the country club and ambassadorial homes. Wow what a privilege and experience it was  , I was so touched by the children covered in just rags and dust , yet just running around the streets with them chasing me put smiles on faces all around ,  we played and fooled around until the sun threatened to retreat behind the hill , it was time for us to go and smiles were replaced with children hanging on my every limb to slow our departure . A rare beautiful insight , people with so little yet so full of life . From here we left for up town and then home. 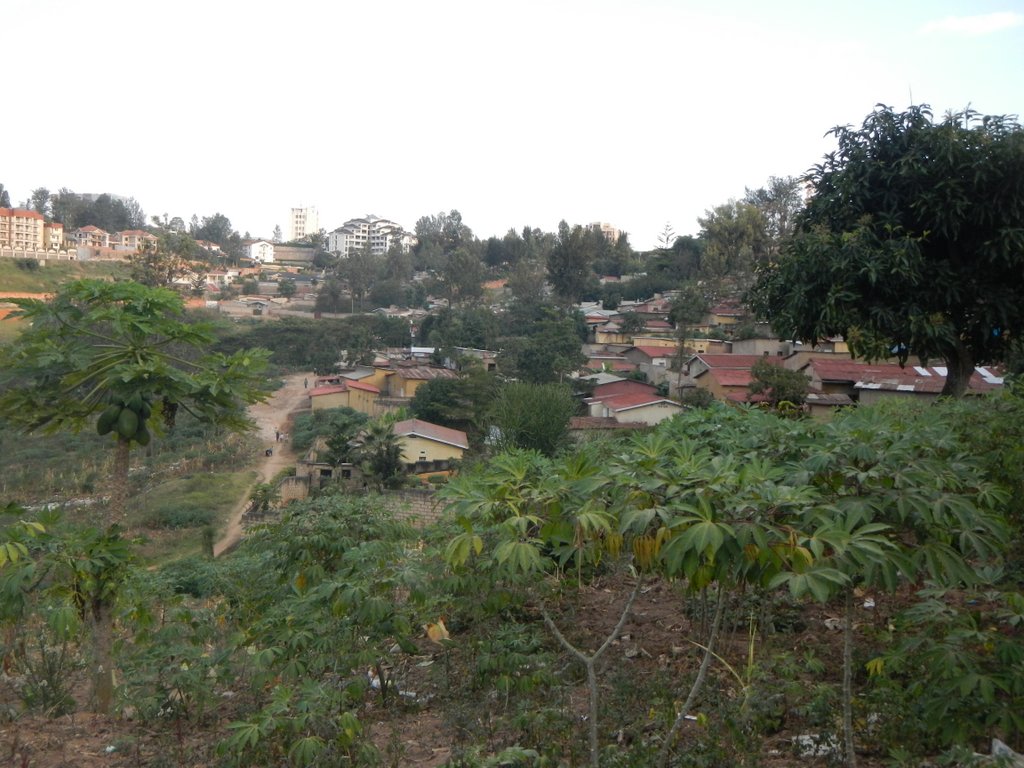 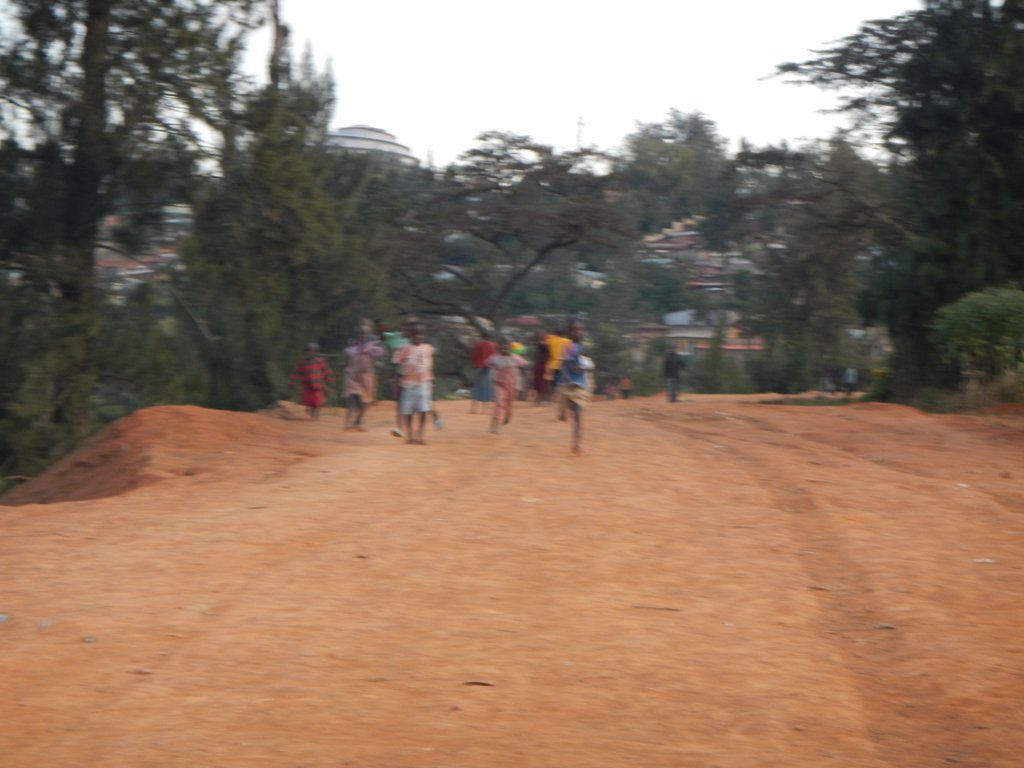 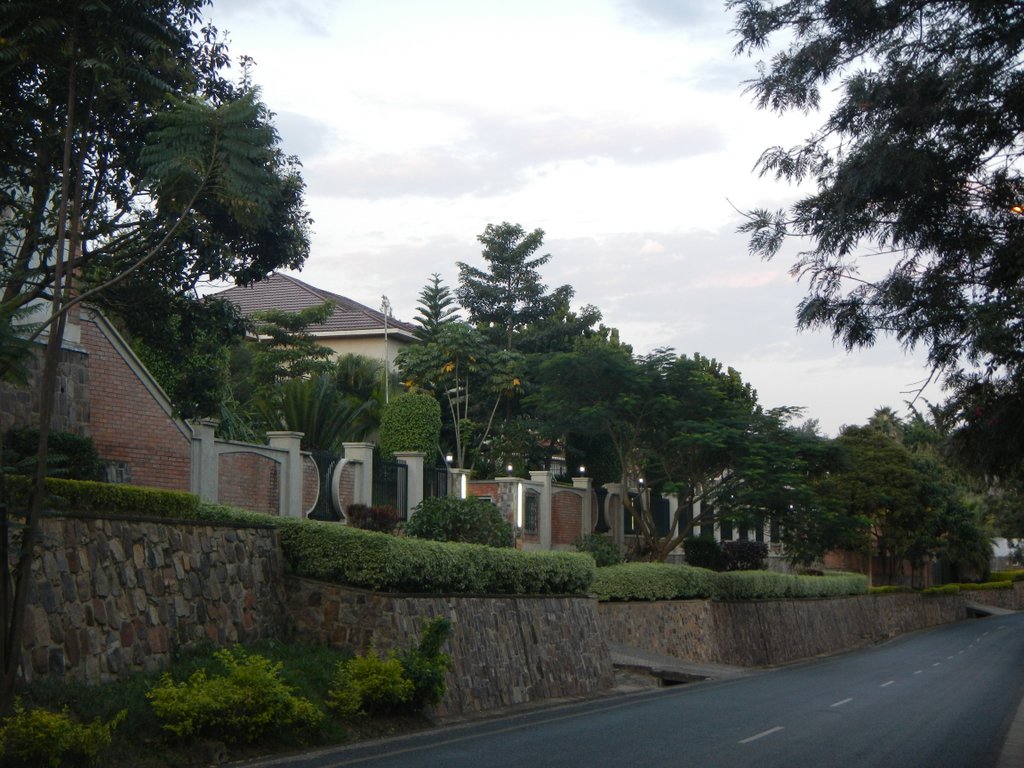 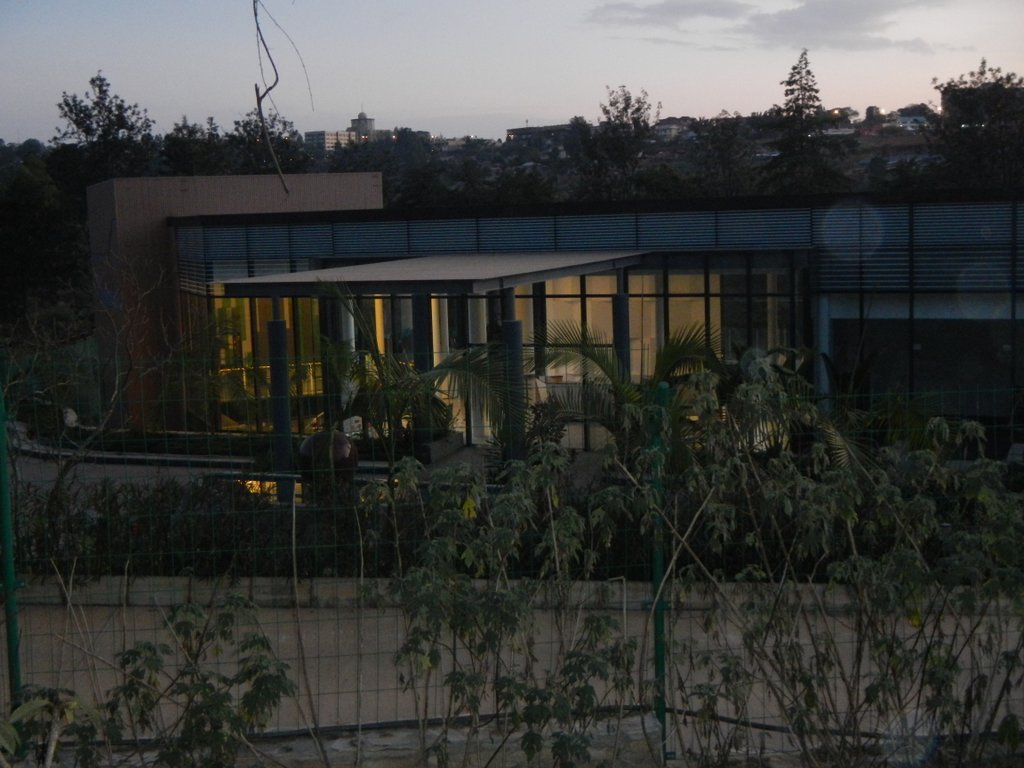 The rest of the evening was spent reflecting on a day that does not often happen to a person , what I saw , emotionally experienced and felt over the course of the day had to find a place in me where it could just be , respected and remembered. 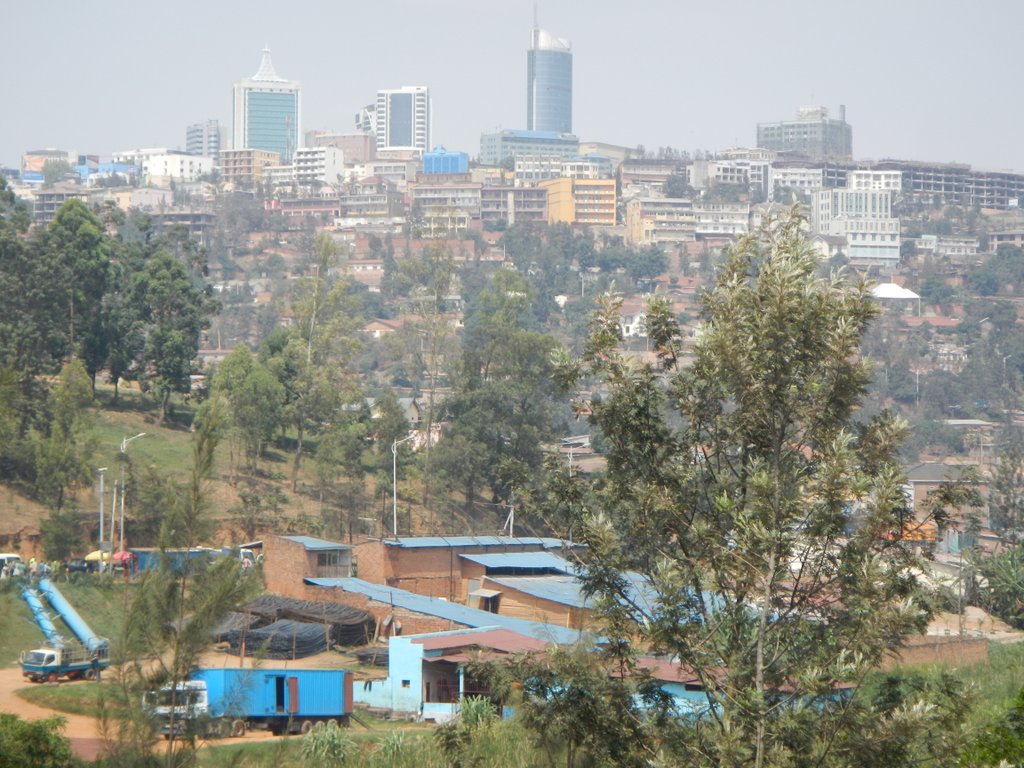 The hills and the valleys

On a lighter note , I have endeavoured to find a sticker for each countries flag I have travelled through and to date the only one I was unable to find was Malawi but was really struggling to find one for Rwanda. I had met JC a local who told me of a place across town where young kids on the street plied their trade and hand produced the flag using different colour reflective tape. He would take me the next morning ,  as firstly I would not find the place and he felt going alone would not be a great idea , communication could be very difficult . So the next morning Victoria and I followed him through morning traffic to arrive on a street with nothing but people , he put out the word and in a flash the artists arrived to hand produce the flag. 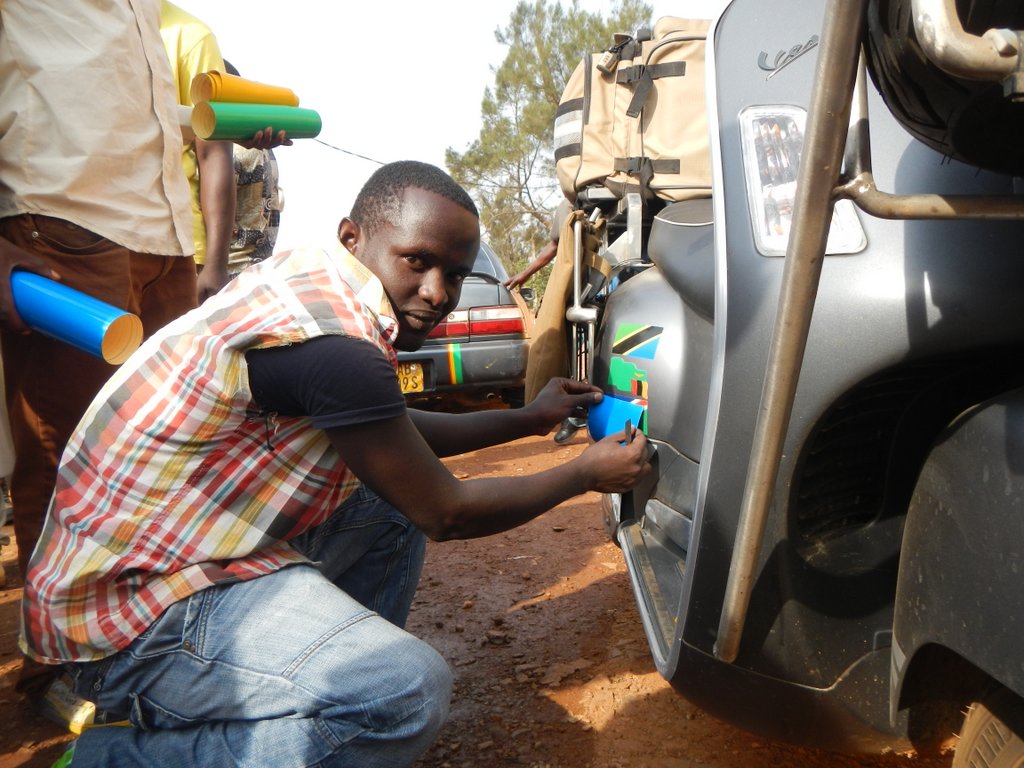 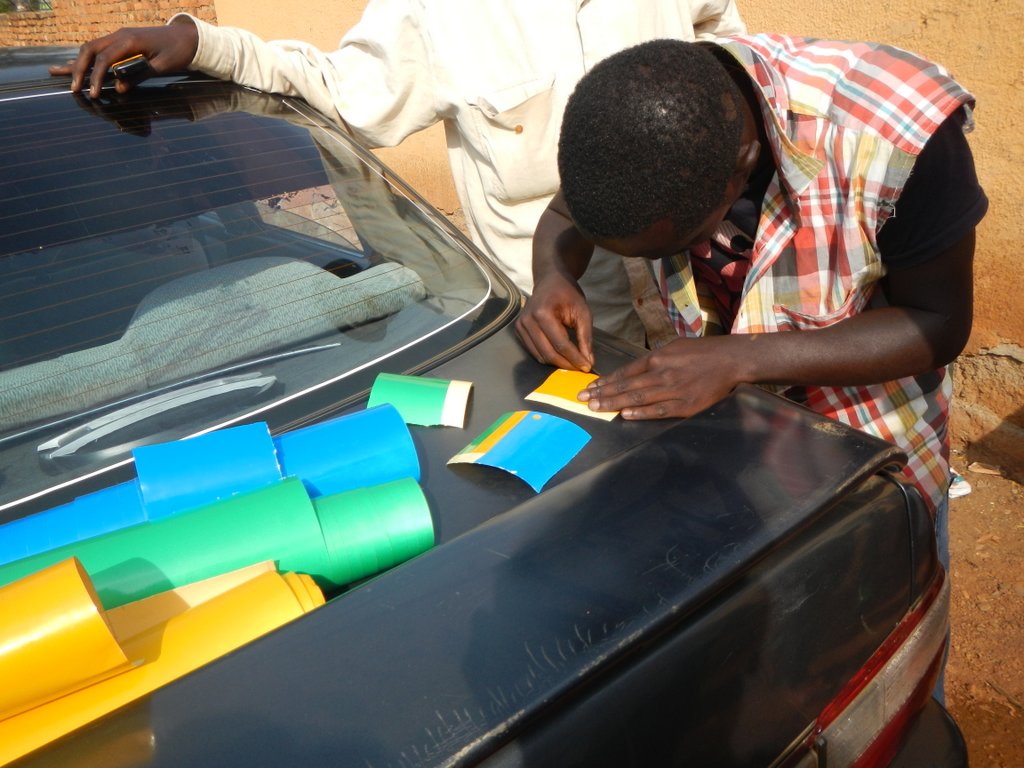 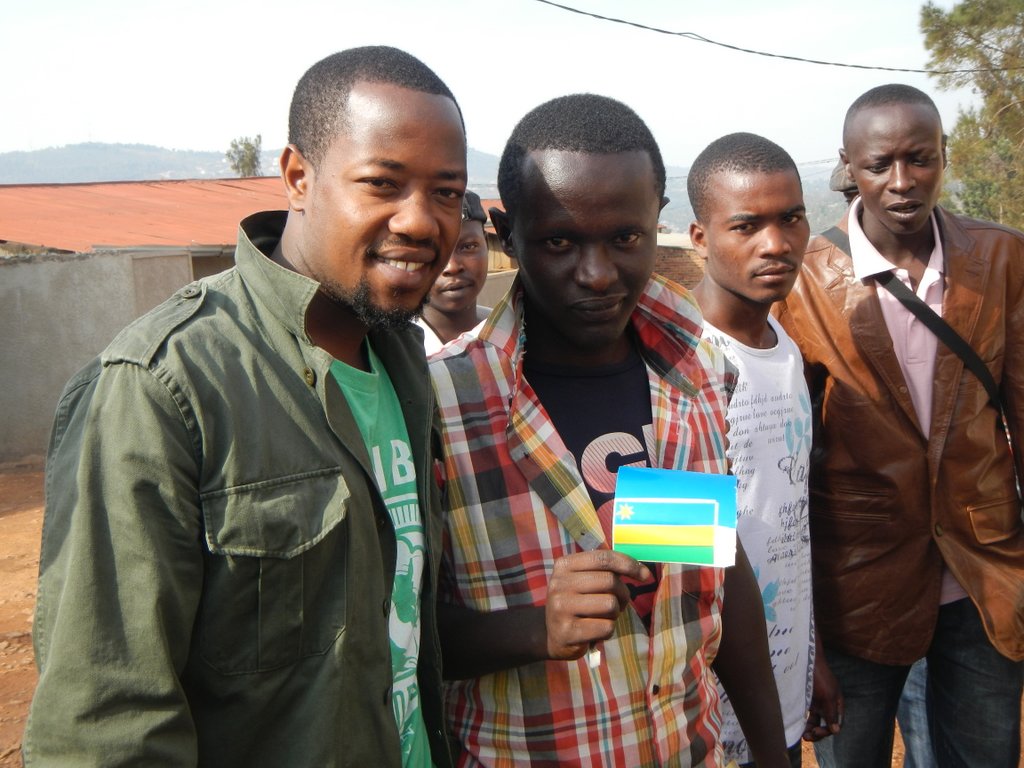 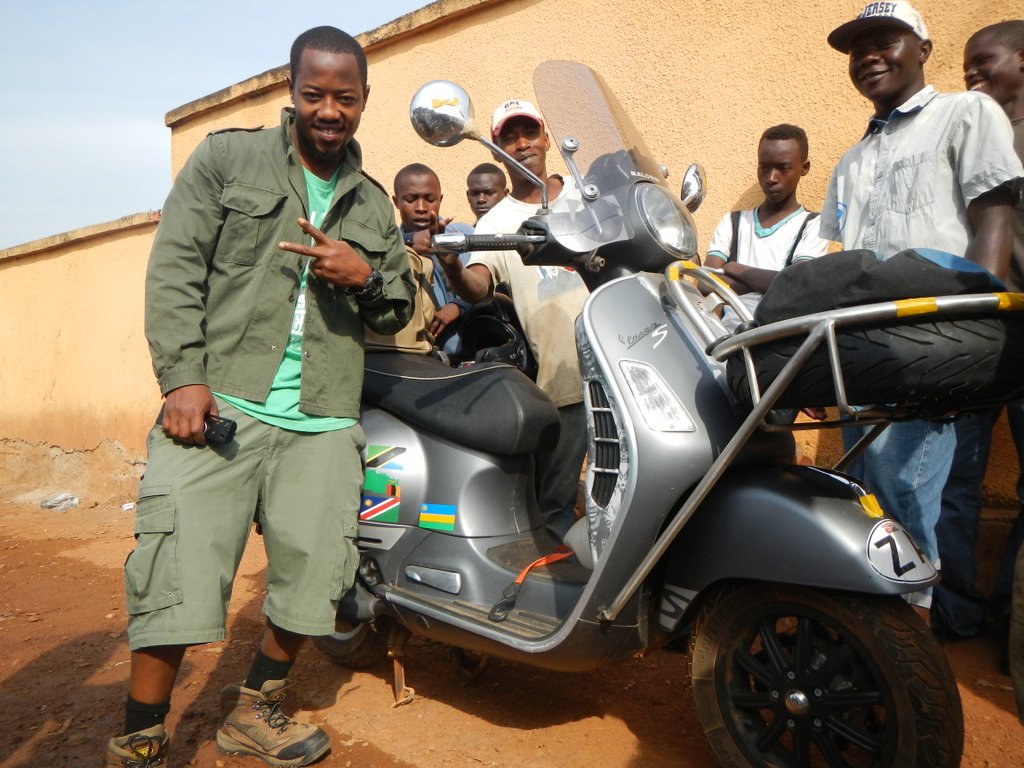 Victoria being a little gangsta while getting her Rwandan flag made

Was I impressed a work of art crafted from reflective tape , using the street as your market and the boot of a car as your work bench . Victoria proudly boasted yet another flag . Off we set to prepare for my next days departure up to Lake Kivu on the Rwandan , Congolese border. On the way home riding past a couple of government buildings flying the flag , I realised my work of art had the sun on the wrong side of the flag , it should be on the right hand top corner not the left , I almost fell off Victoria I was laughing so hard , I spent the rest of the day with a huge smile on my face while I toured Kigali.

Tomorrow we ride for the Lake and to explore the countryside , tea plantations and the mountains.