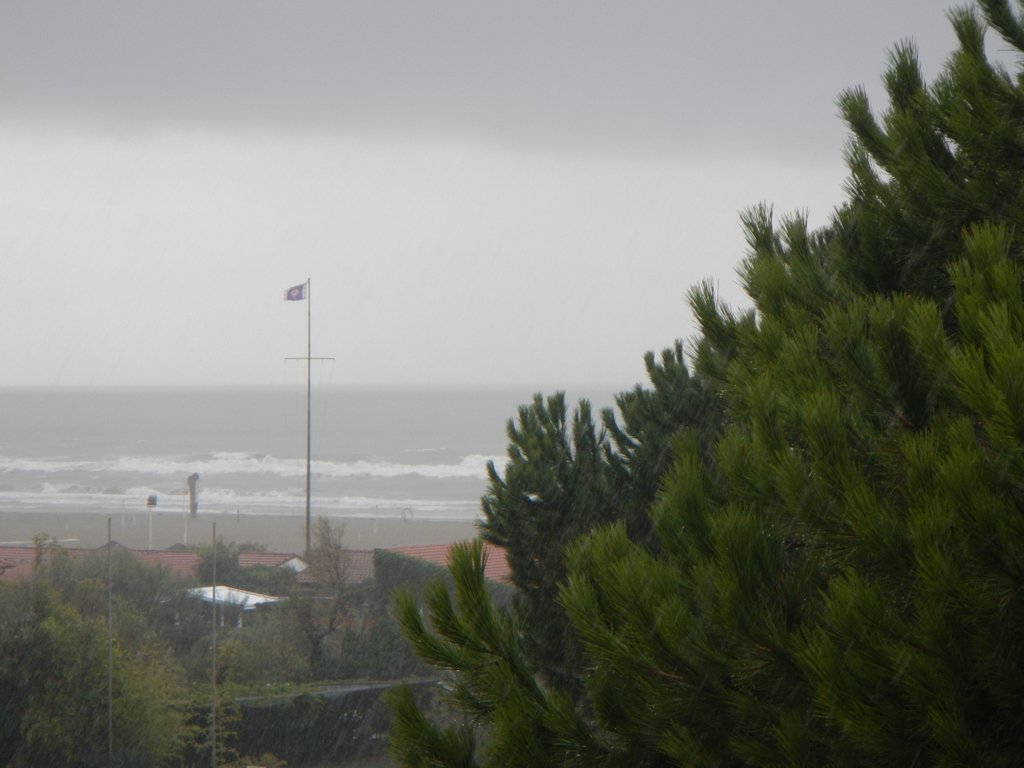 Weather from my window.

The previous days rain had run to the mountains , so packed up we took the coastal road heading to Genoa through the mountains , I was really enjoying the riding especially since banning the GPS from toll roads and highways. Alas it was not long before I caught up with the rain that had hit the coast the previous day . Within one hour we had gone from a sun filled coastline with cyclists of all shapes and sizes dominating the roads , pedestrians and dogs enjoying the promenade to the misty mountains and a deep slow wet seeping rain . 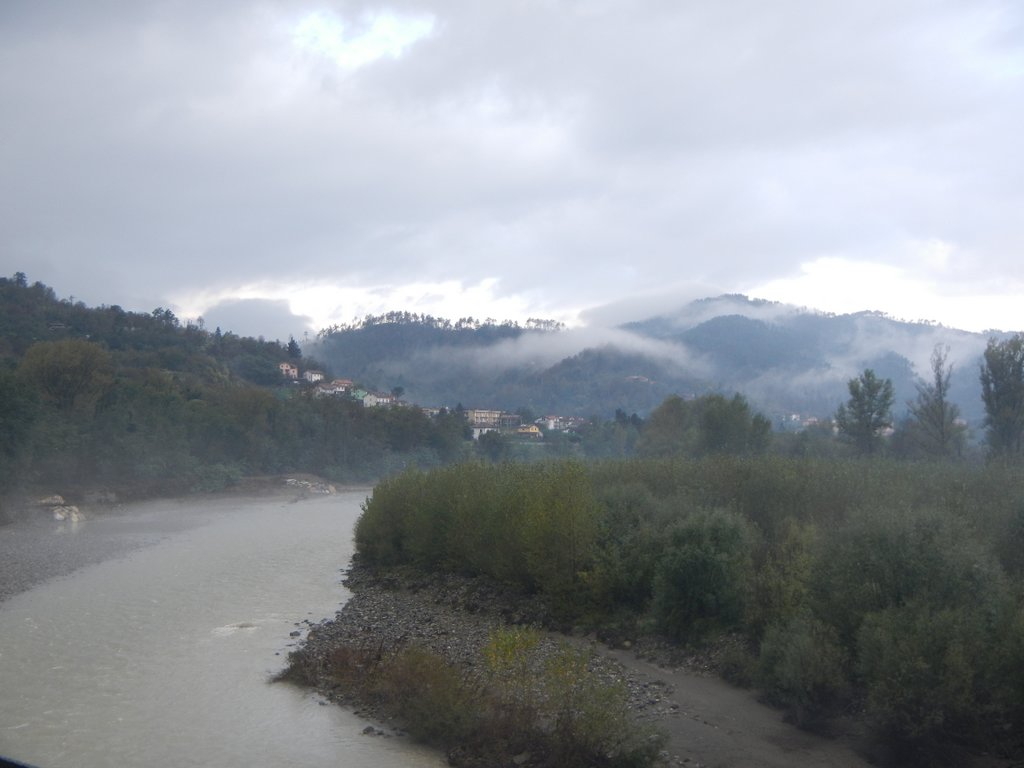 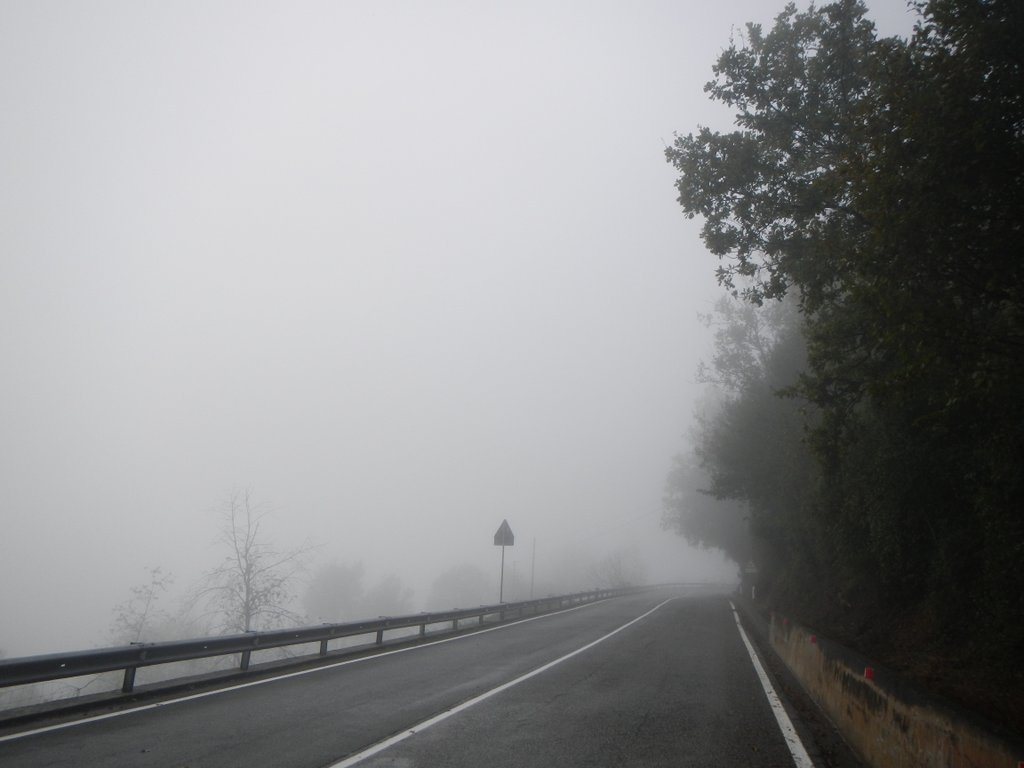 In the thick of it .

The roads got wetter and windier , I got soaked by the rain and moist mist that engulfed us for two hours . The ride got colder and colder as we climbed up  into the mountains . It took over three hours to crest and to find the sun that would follow us all the way to France .

I felt that I was caught up in  the land that inspired  Bram Stoker , the tall alpine firs packed thick and dense along the mountains steep sides , standing perfectly straight on 45 degree slopes , line after line. My vision limited not only by the dense mist  , but the sharp curves and bends that slowly stepped us to the top . The place perfectly still but for the motor climbing , the mist hiding all from sight not only on the road but all who lurked and lived in the misty mountains . Riding solo does let your mind run wild and free , so I enjoyed my land of Dracula high up in the mountains . 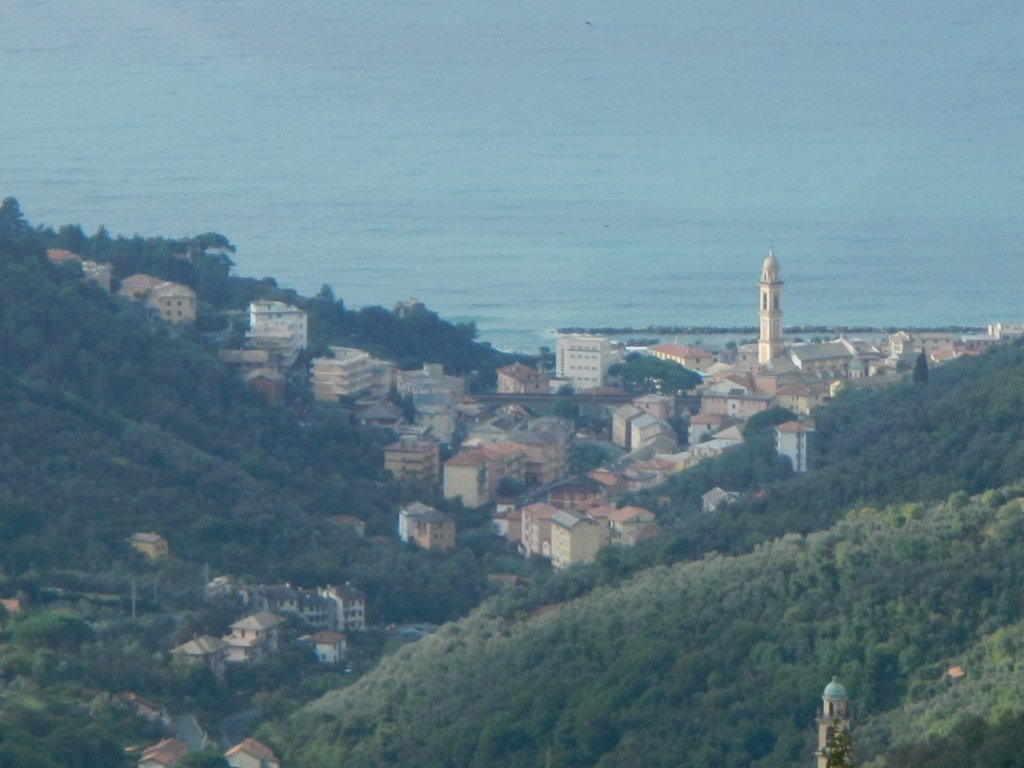 On the way to Genoa .

The sun saved us from the wet and cold and started to thaw me out as we came out of the pass and down to Genoa  , from here is was the Italian Rivera , full of spectacular riding roads and then France arrived at our wheels full of sunshine , opulence and dramatic coastline . Another border crossing , but not really , just a sign to tell you that the registration plates on cars now said F not I , bongiorno was replaced with bonjour , the architecture upped a gear and the amount of  posing people  exploded . Vic loved it here , the coastal road that took us into Monaco and beyond , just a great ride. 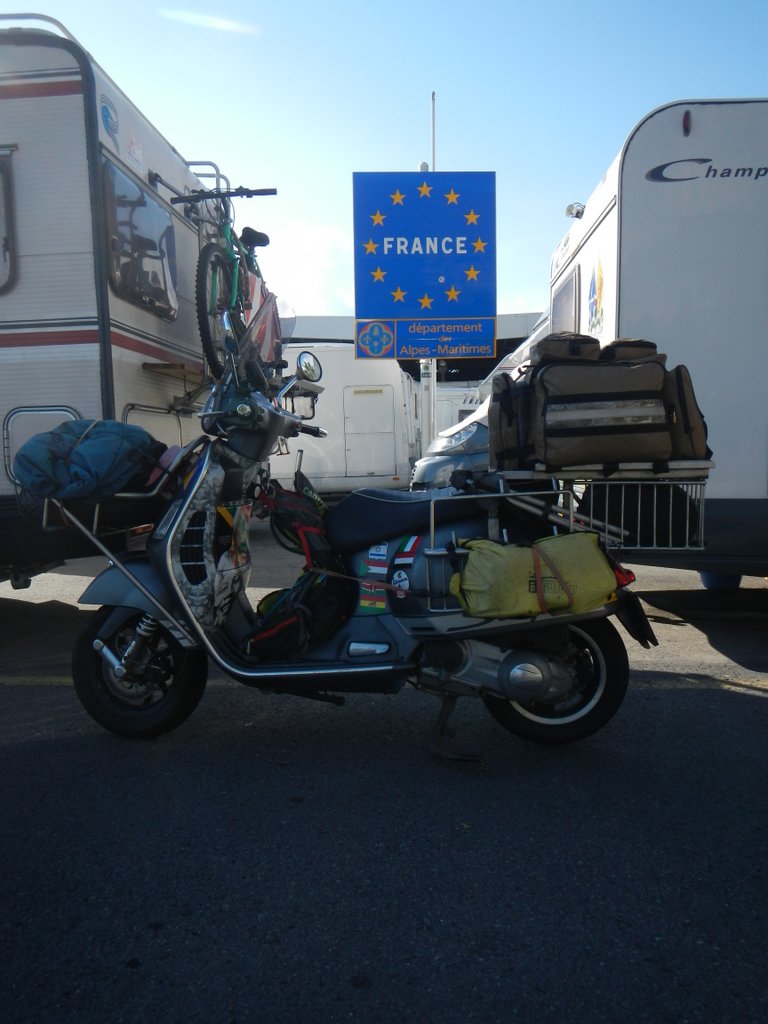 I think Vic and I really looked the part on the streets of this principality , amongst those prancing horses that would creep ever so slowly to the tunnel entrance , those LED lights low and ready to pounce , once the rear left the light , the ever proud owner would apply all of his will and force to the accelerator ,  the sound of that finely tuned motor would transform the tunnel from a path through a mountain to a place of pilgrimage for the owner . The car responds to his will , answering through the pipes sending a mechanical  wail of readiness , the launch and then brakes as the bonnet finds the rear of a slower car , down to a burble until the next tunnel.

The  badge of Bentley flying its spurs , the owner wrapped  in leather and wood , stitched and stern his face as he joins the peak hour jam , only his comfort can calm him . So many marques on display in this land , some bearing performance , others luxury and others  just A to B .

Vic and I had the usual advantage of two wheels and no jam , we stitched our way through , on to Nice , down to Cannes , enjoying this life on display , stopping to take in the cliff views , the deep blue and the people of the south. 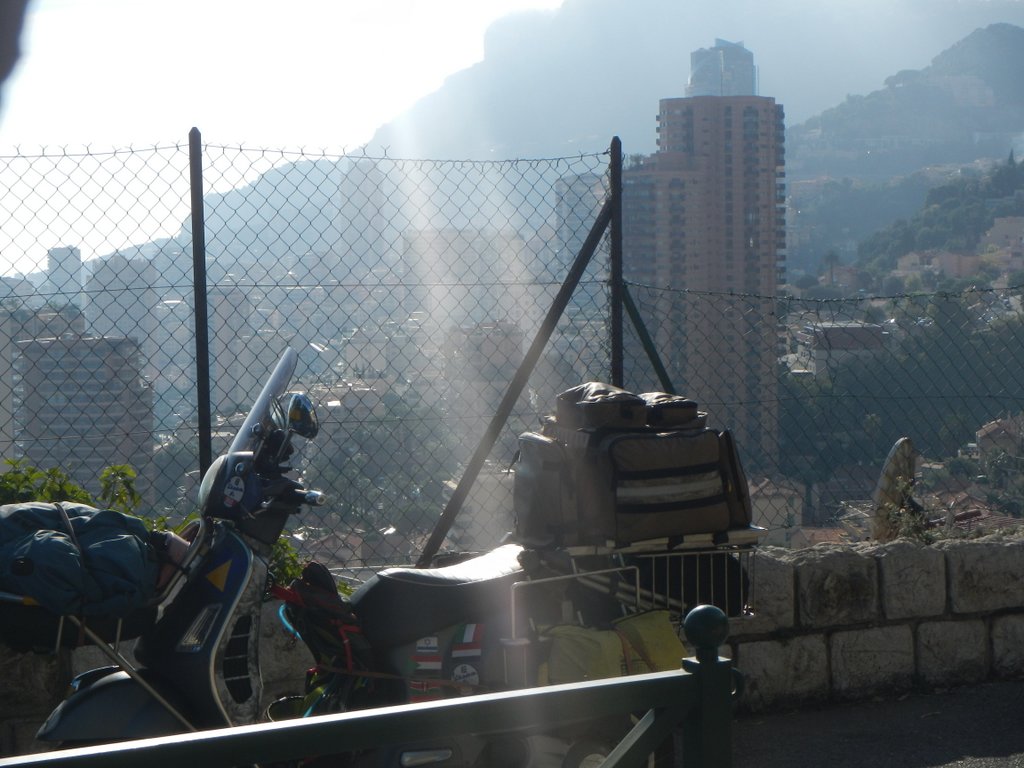 Victoria en route to the Principality of Monaco. 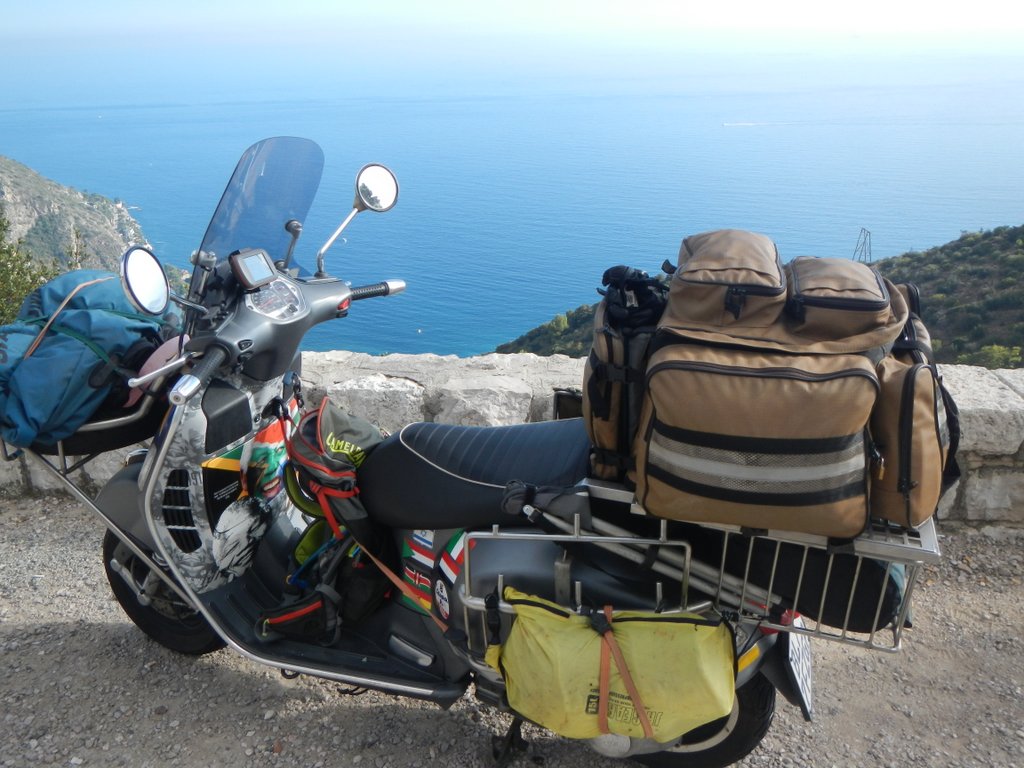 Arriving in Grasse we found accommodation , exhausted from a extremely long day on the roads of two countries , is was off to bed after a quick dinner , tomorrow more back roads as we make our way up to Lyon . 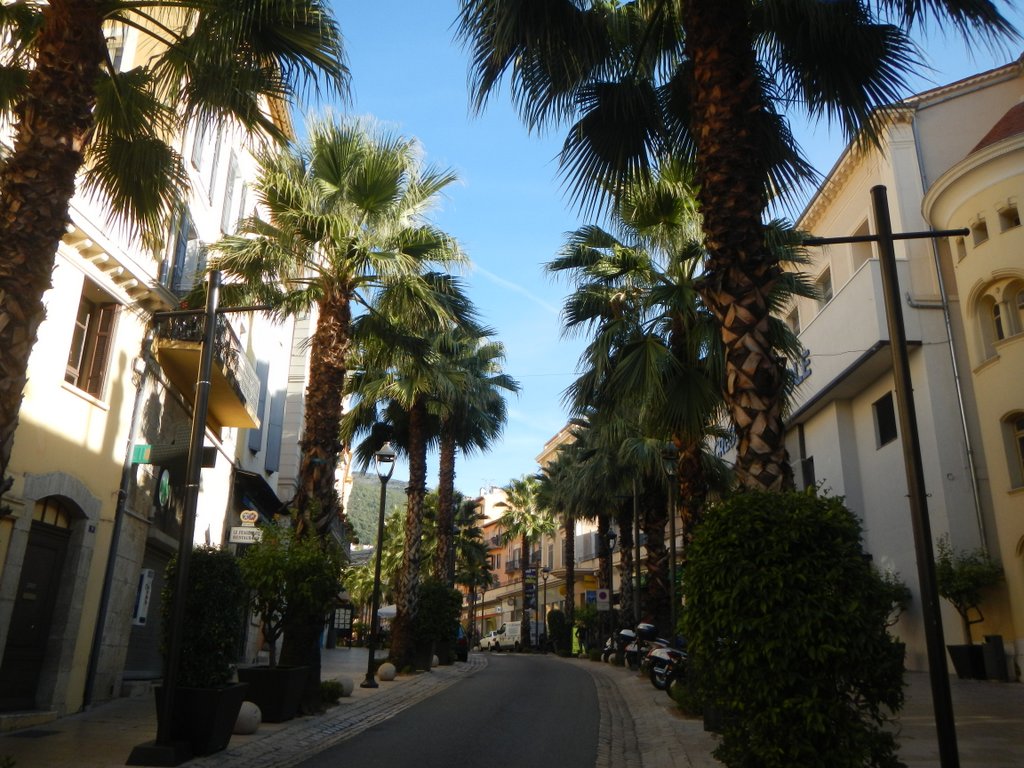 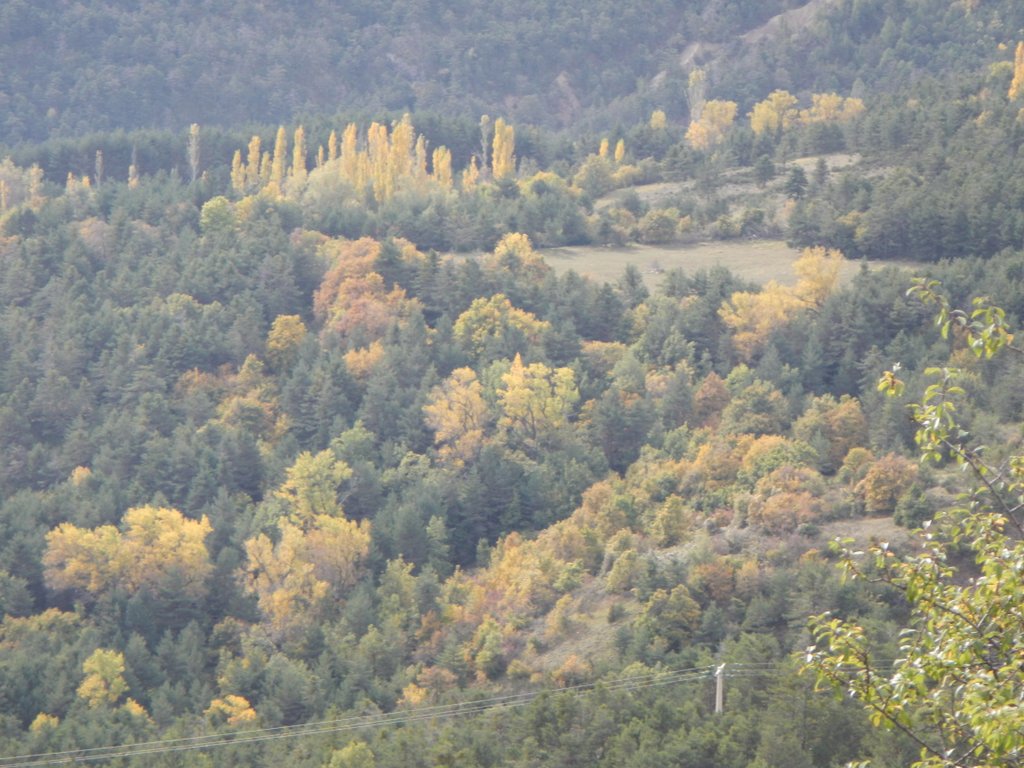 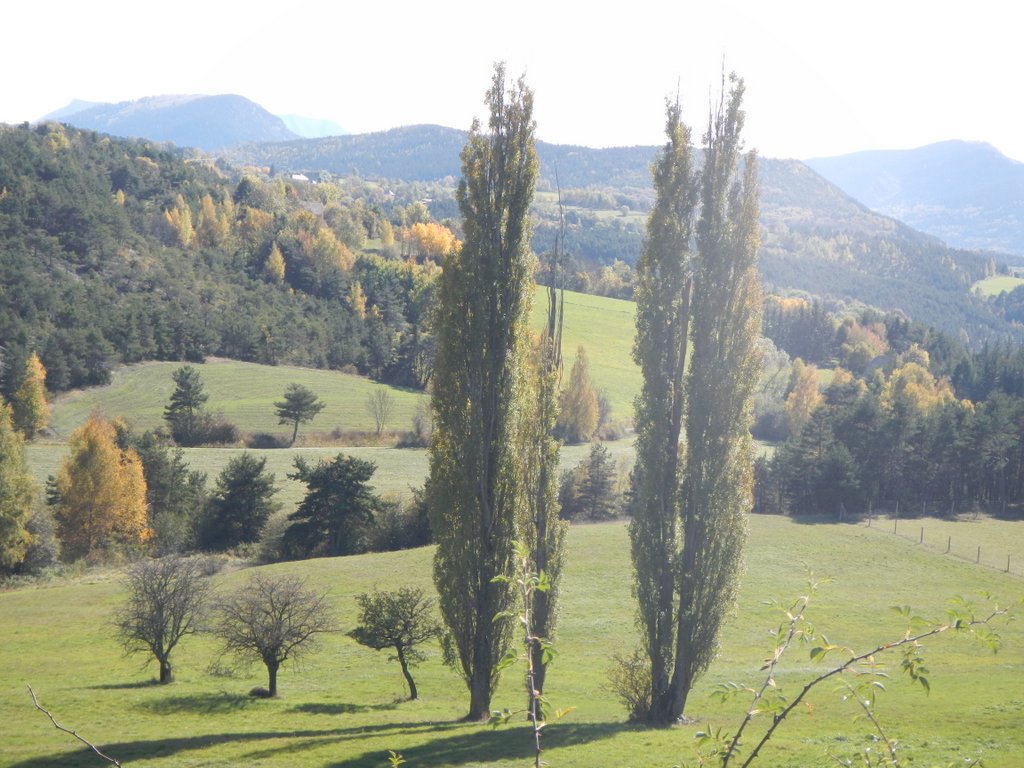 Todays ride was something I have not experienced before , we ended up on a road or a route that takes you out of Grasse and through the back , rural countryside of France , almost as high as Lyon . The road  referred to as route Napoleon. If ever you are in this part of the world , ride , drive or cycle it , what a spectacular two days of riding it would be .

Route Napoleon is very popular amongst bikers and being a sunny Sunday Vic and I had company and a lot at that . When we stopped people would pop out their phones , pictures and questions would follow , with a whole lot of disbelief .

The route is very challenging from a concentration point of view , with very steep descents , accents joined by curve after curve  , the going is slow and the distance travelled resembled Africa in many ways  , long hours to distance travelled. Damn it was fun.  Words fail , photo’s offer a little more . 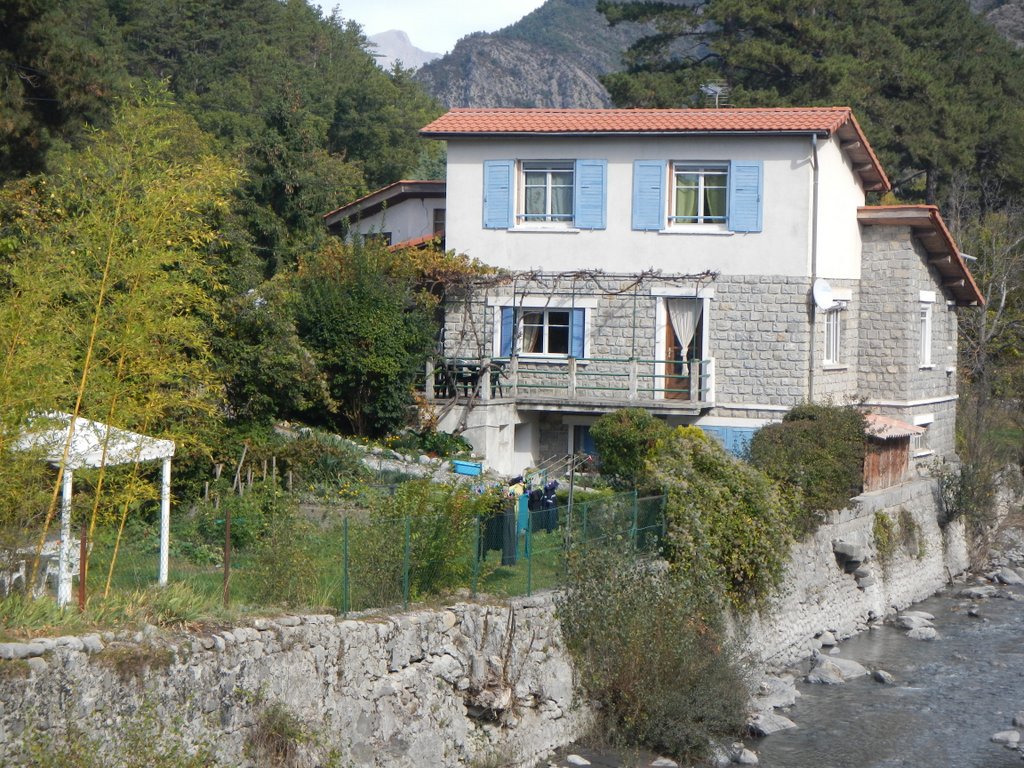 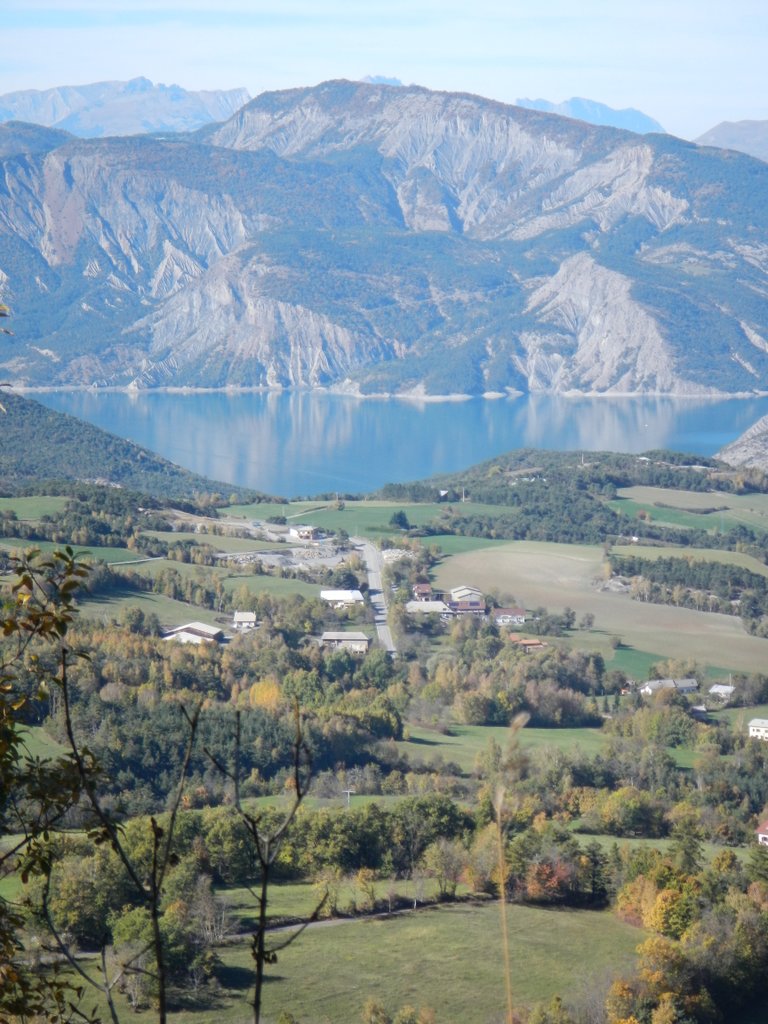 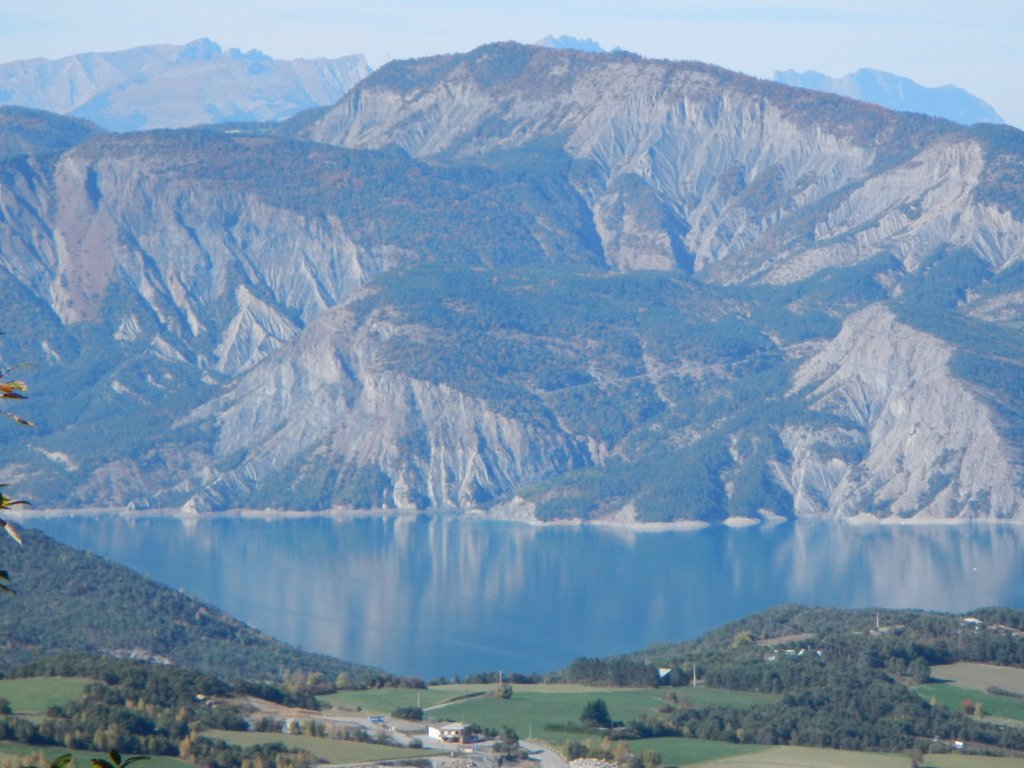 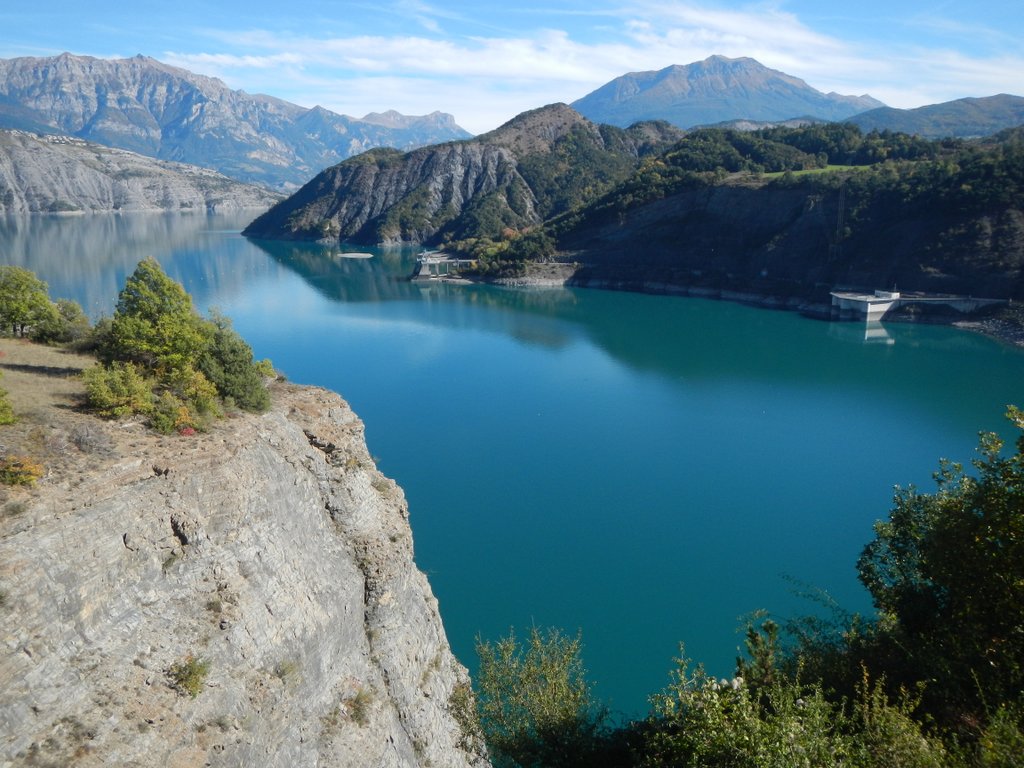 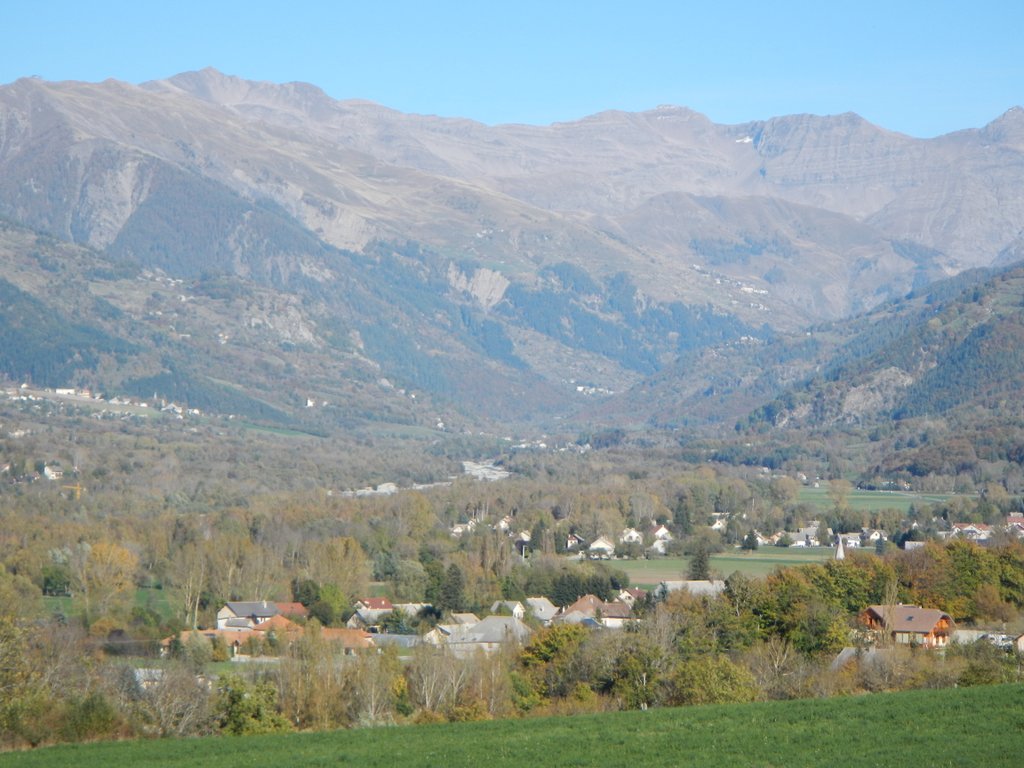 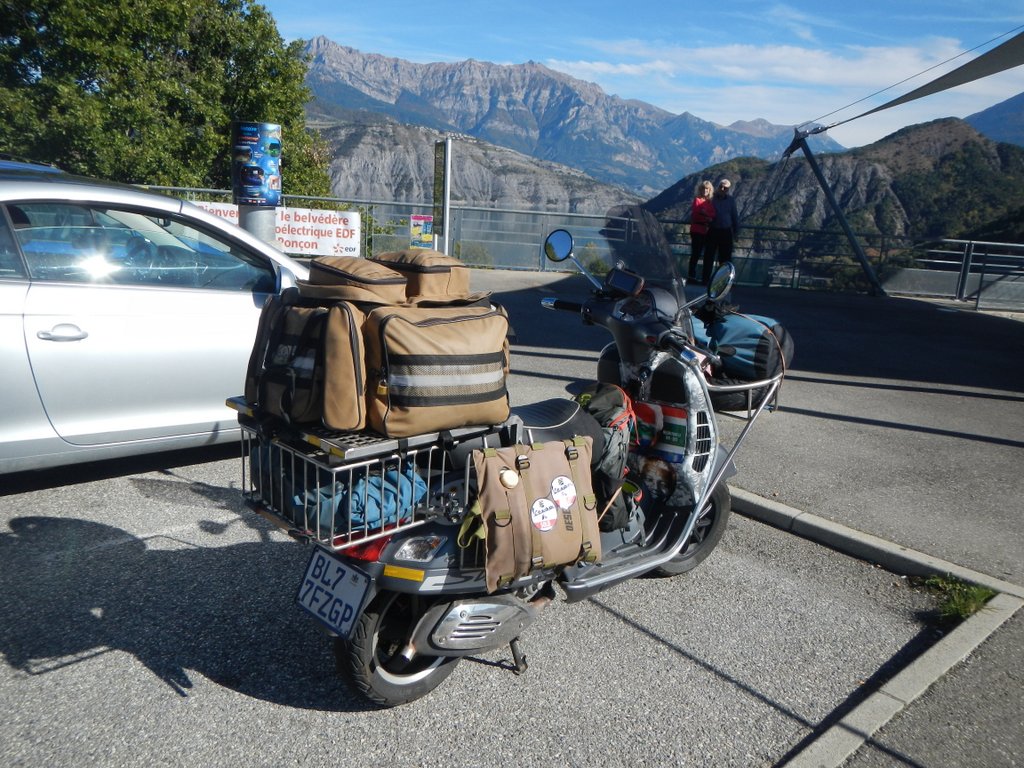 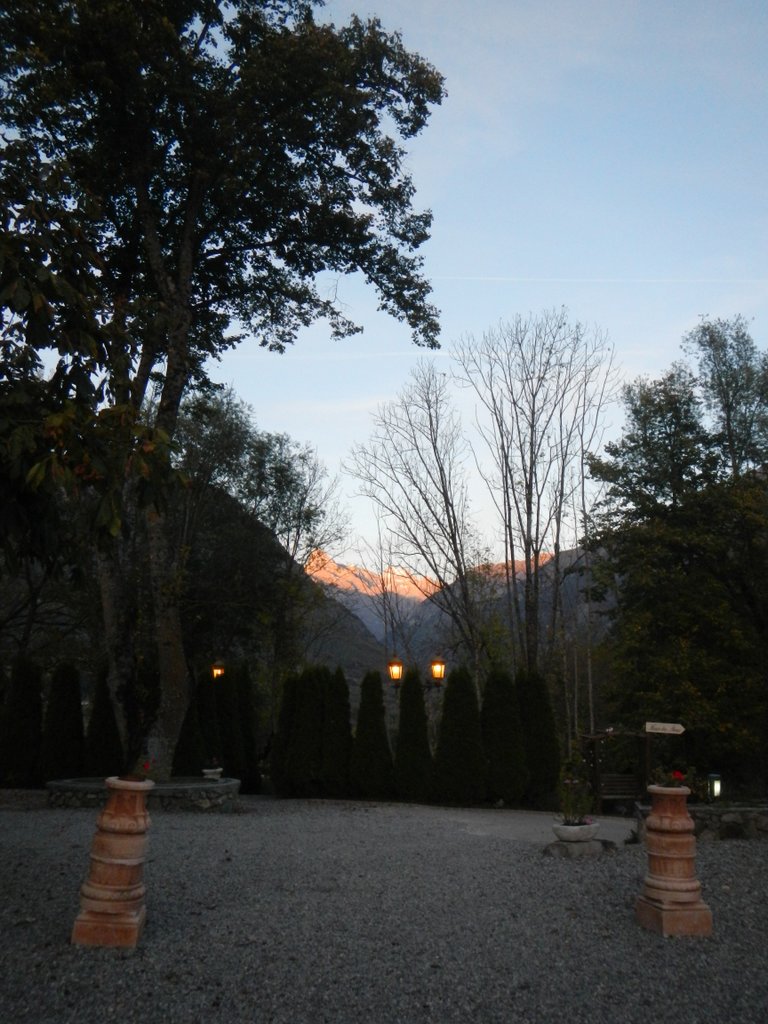 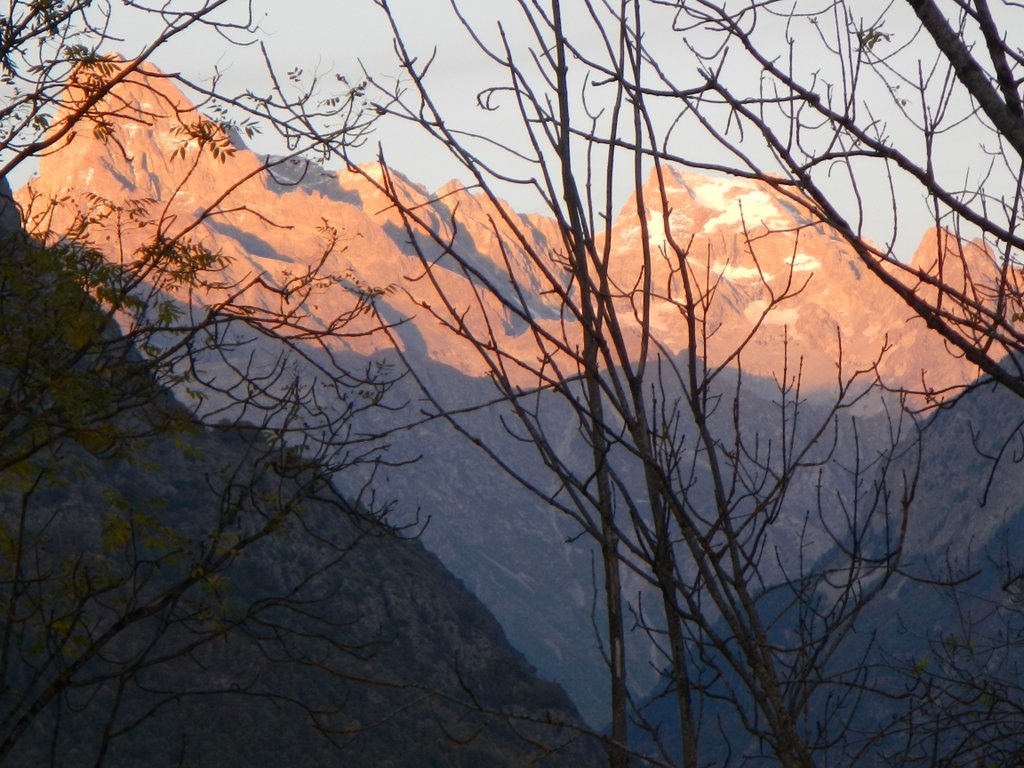 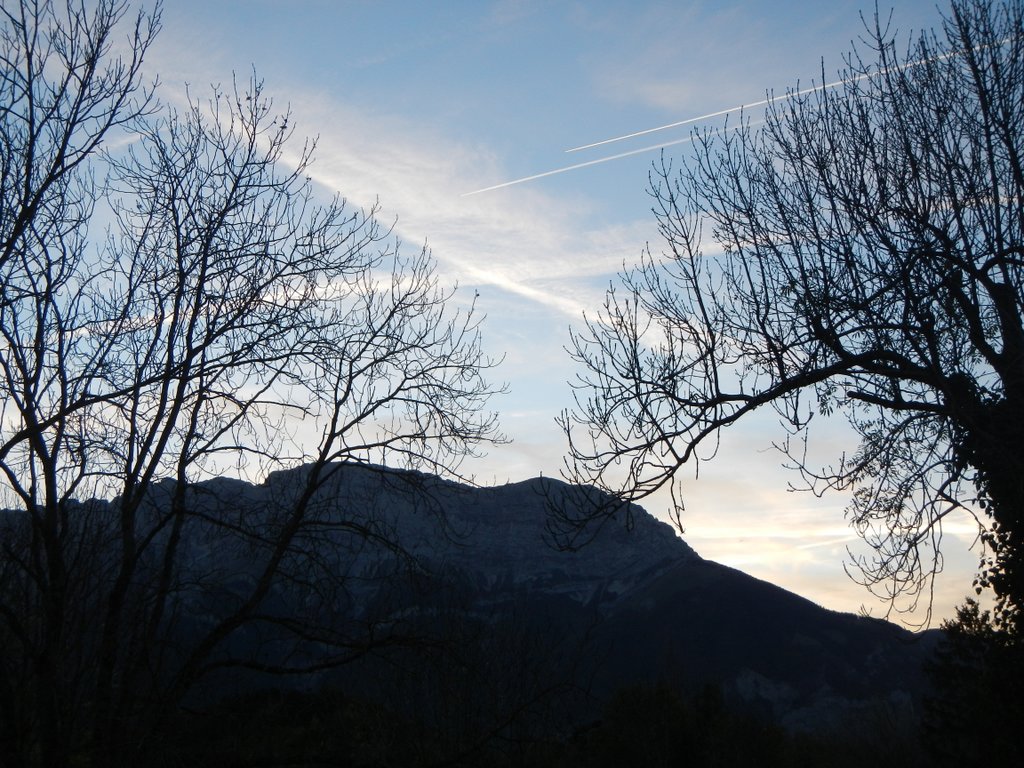 The mountains full of families truffle hunting , for it is truffle season here in France and that black gold of the culinary kind is in very high demand , as we ride I see people setting off , back packs and baskets hoping to find their truffle at the end of the rainbow , just beautiful. We rode the Alpine roads all day found refuge in the mountains surrounded by the magnificence of this land turning rich with autumn . I sat outside watching the sunset , the twinkle off the first snows high up on mountain tops , the clean beautiful sky crisscrossed with the hand of the jet stream , what an incredible ride . 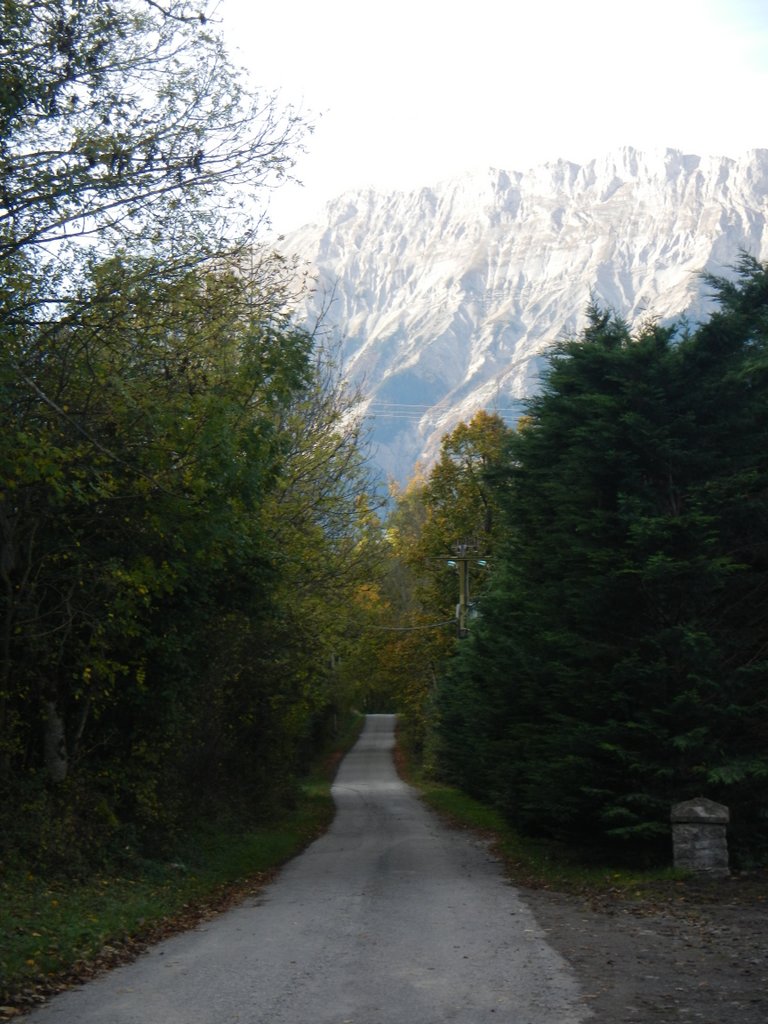 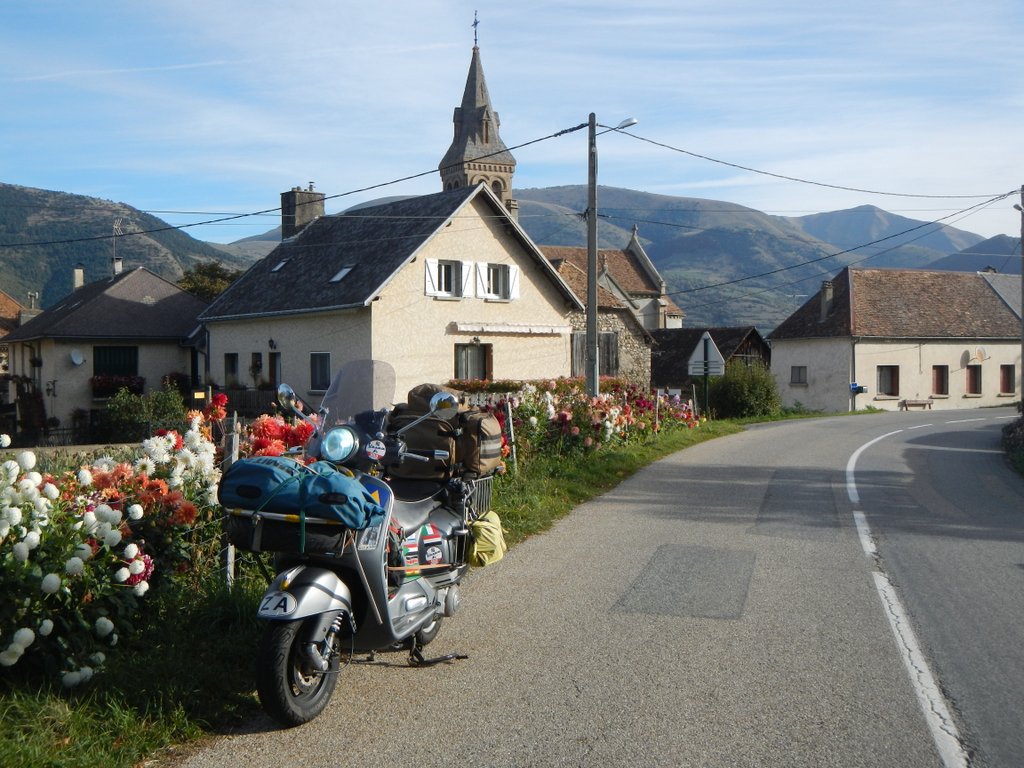 The next morning after a delicious breakfast , French style , of fresh baguette , cheeses , cuts , that thick  lumpy  farm fresh yogurt and freshly brewed coffee , prepared me for the mountains and a eight hour ride to Lyon on roads that would even trump the day before as we rode higher and higher , Alpine style . 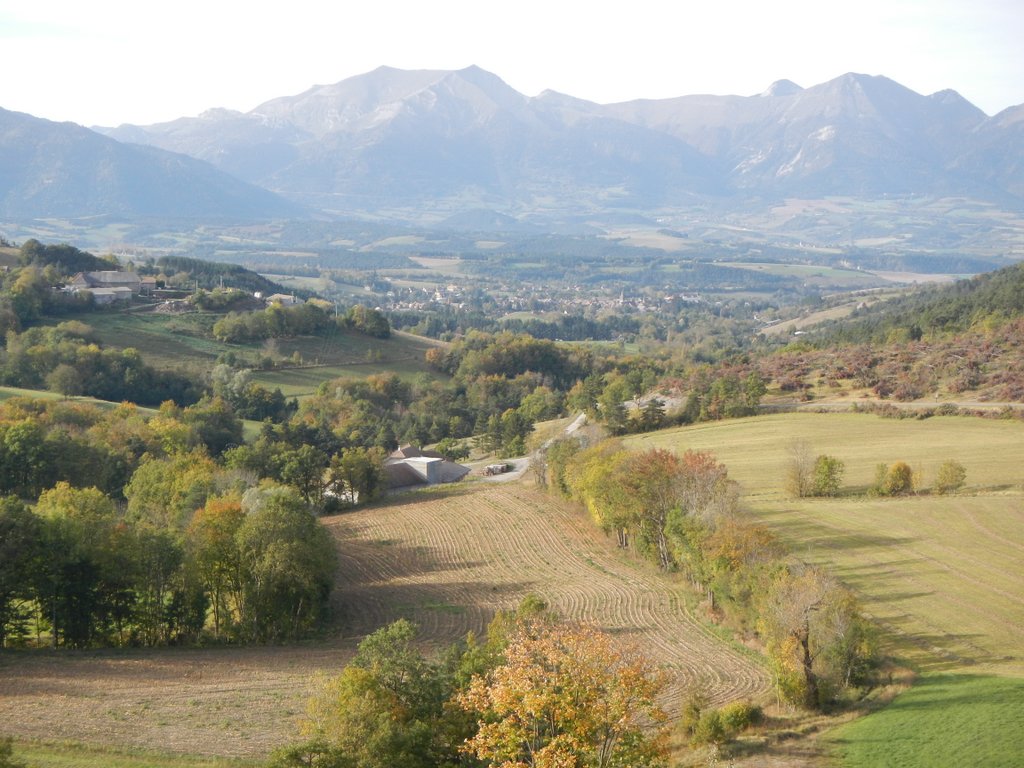 Just waiting for the snow .

The ride took us through dramatically  beautiful Alpine scenery , with the colours of autumn in the sunlight  adding to this rich landscape . From the  delicate greens , the  golden yellows , the reds , browns and the magnificence of the blood rusted leaves , their colour so beautiful . It is like mother nature punished them for trying to hold on to their green for to long , when they well knew the new season was upon them , they  ignored her , held on so tight , in a vain attempt to elude her . She gave them no option to go from green to gold , her punishment so harsh she bled them to their death , leaving a colour indescribable in its beauty and the pain of its demise . 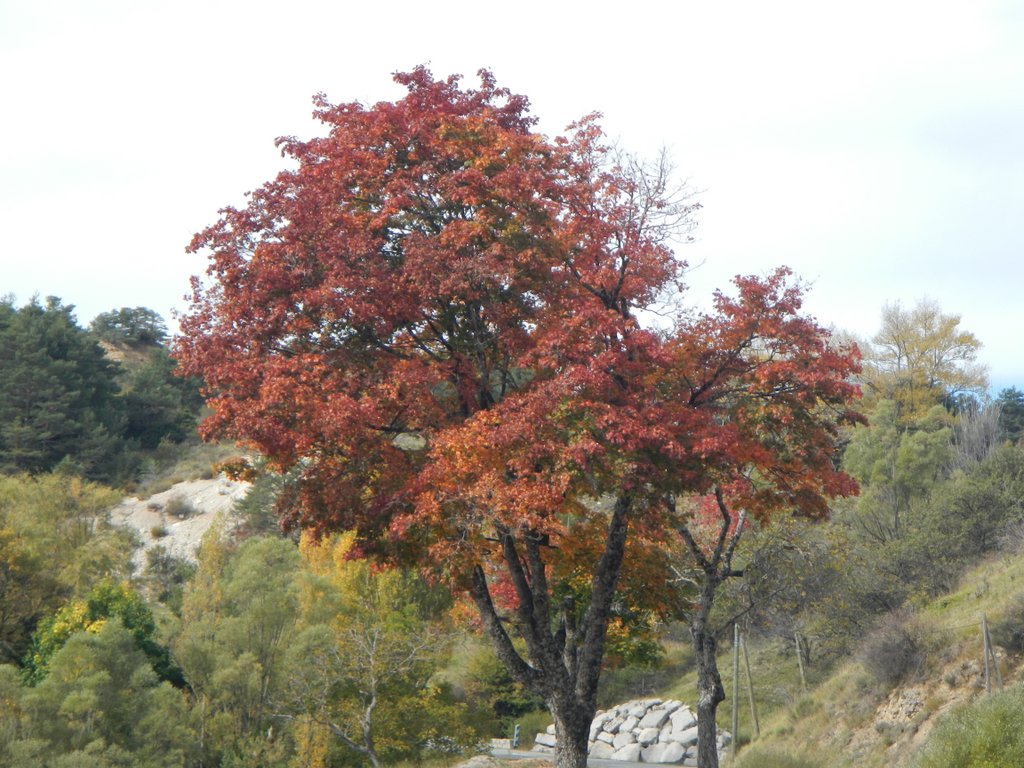 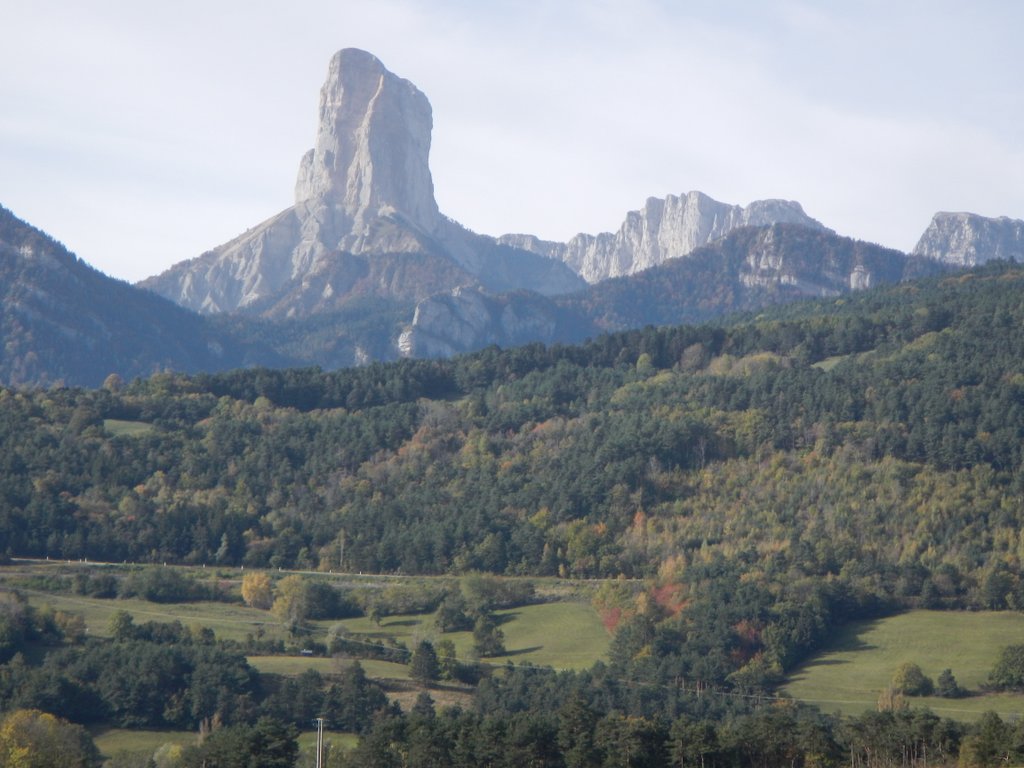 A day long , beautiful and cold , with coffee stops , vistas  and views that left your body fresh with the air , your mind clear with the light  , so cleansed by nature we rode into  Lyon in the late afternoon , with the briefest of light left on the city , we found the hotel , settled in , tried to wash the cold out and after persisting with that hot shower  the chill left my bones fleeing back into the night where it belonged .