I booked into the Philae hotel in Aswan , the staff a total delight from the outset , I could not get into hot shower fast enough , scrub , rinse , scrub , rinse , I was turning pink from applying so much pressure , but damn it felt good , then I brushed my teeth for so long that I feared gum damage , finally the ferry washed off . I went down stairs to book a tour to Abu Simbal , which we had sailed past and it looked really impressive from the boat , I was told that I would be collected at 3 am yes AM to join the convoy that left Aswan at 4 am to drive the 300 kilometres to Abu Simbal . Oh what the hell , what harm would it do ,  another night of hardly any sleep . My wake up call felt like a cannon  going off next to me , I jumped  up showered and out. The drive is long and straight and we arrived just after 7 in the morning . 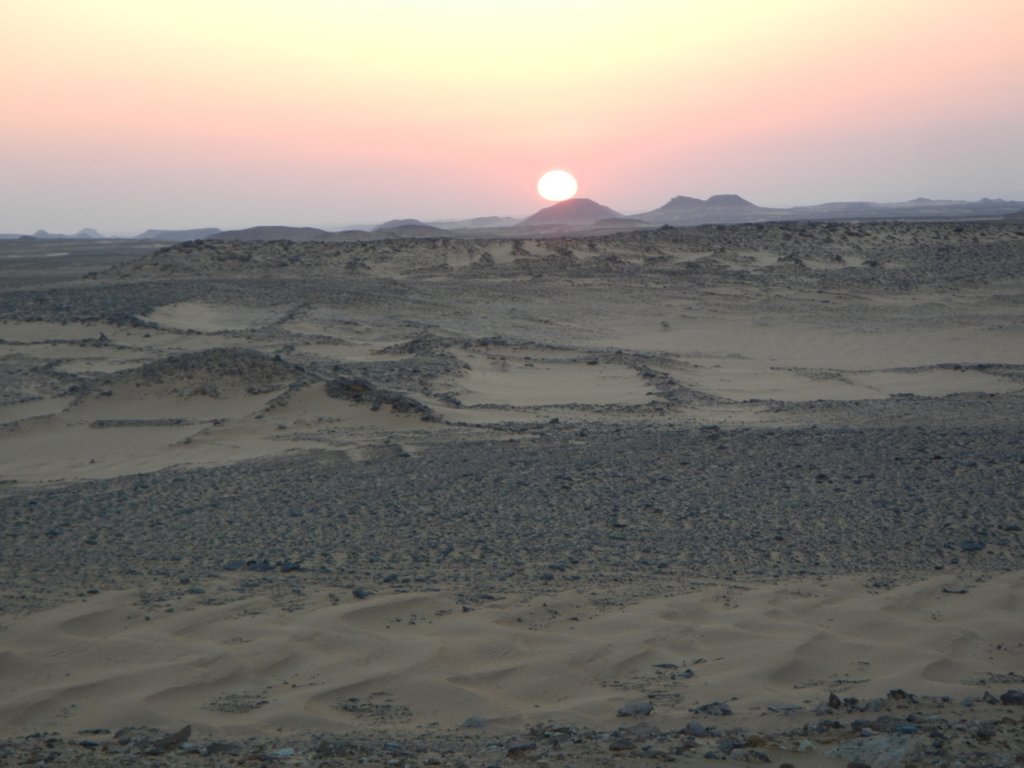 We had two and a half hours to explore until the convoy left back to Aswan . What makes Abu Simbal interesting is that it was saved by a joint venture between Egypt and Unesco from disappearing under the water once the Aswan dam construction  was completed , so the entire temple was cut into huge blocks and moved to take its place above the water line . Very impressive to say the least , we humans can be extraordinary on occasion cant we ? 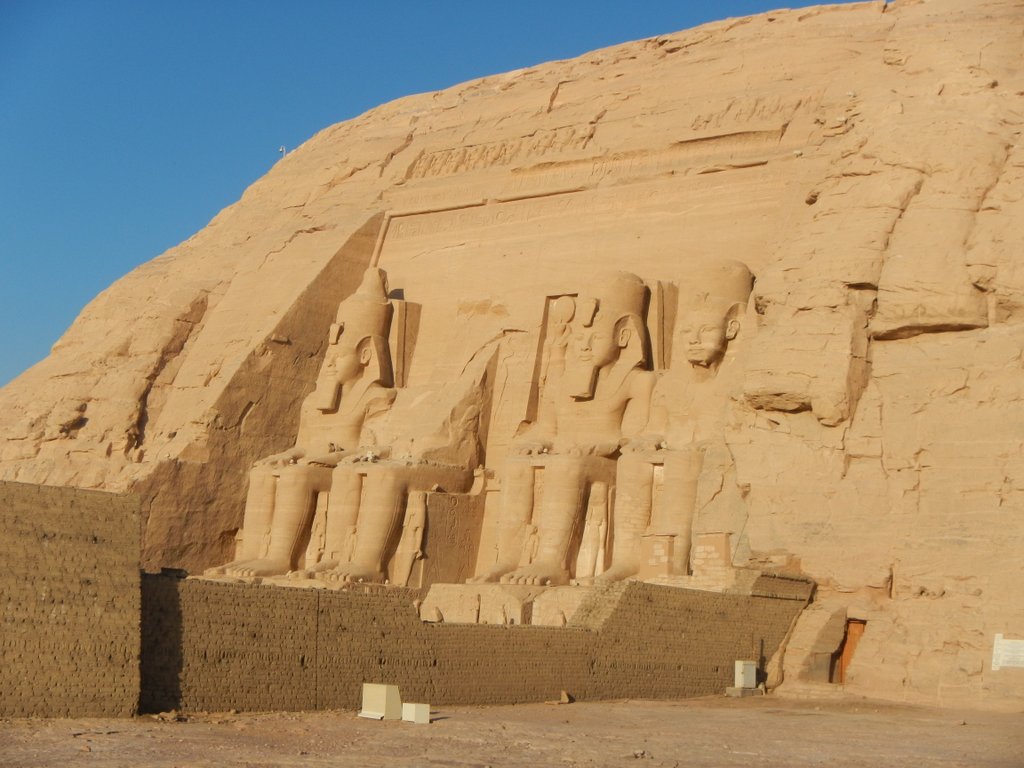 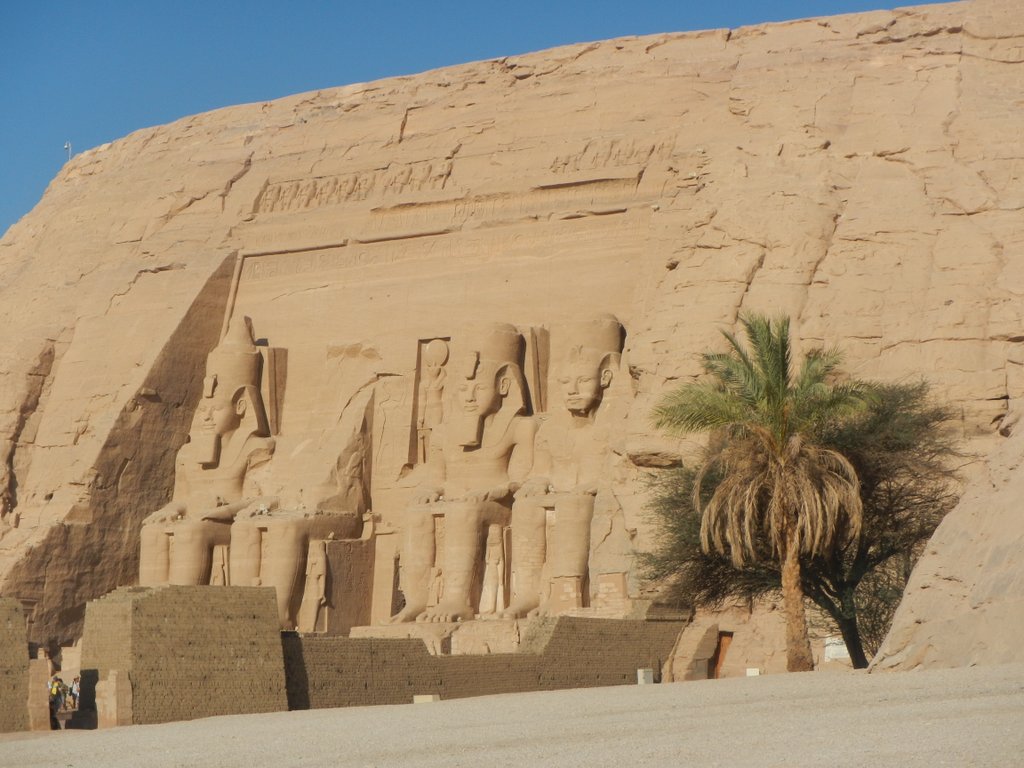 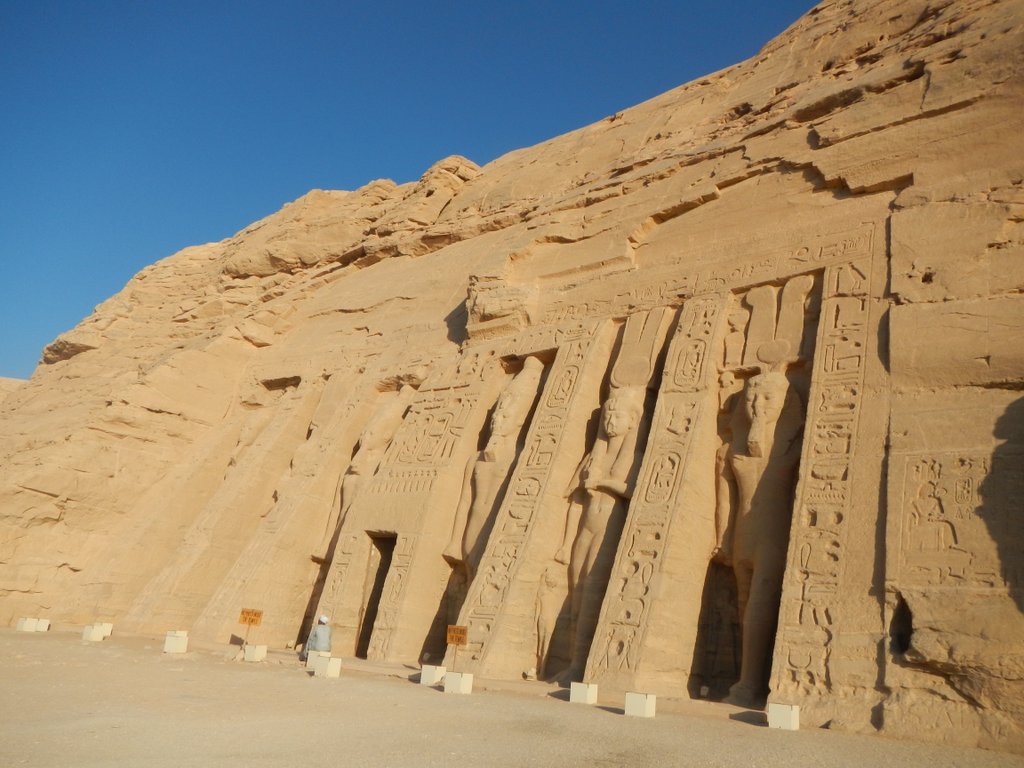 Temple constructed by Ramesses the second for his wife Nefertari 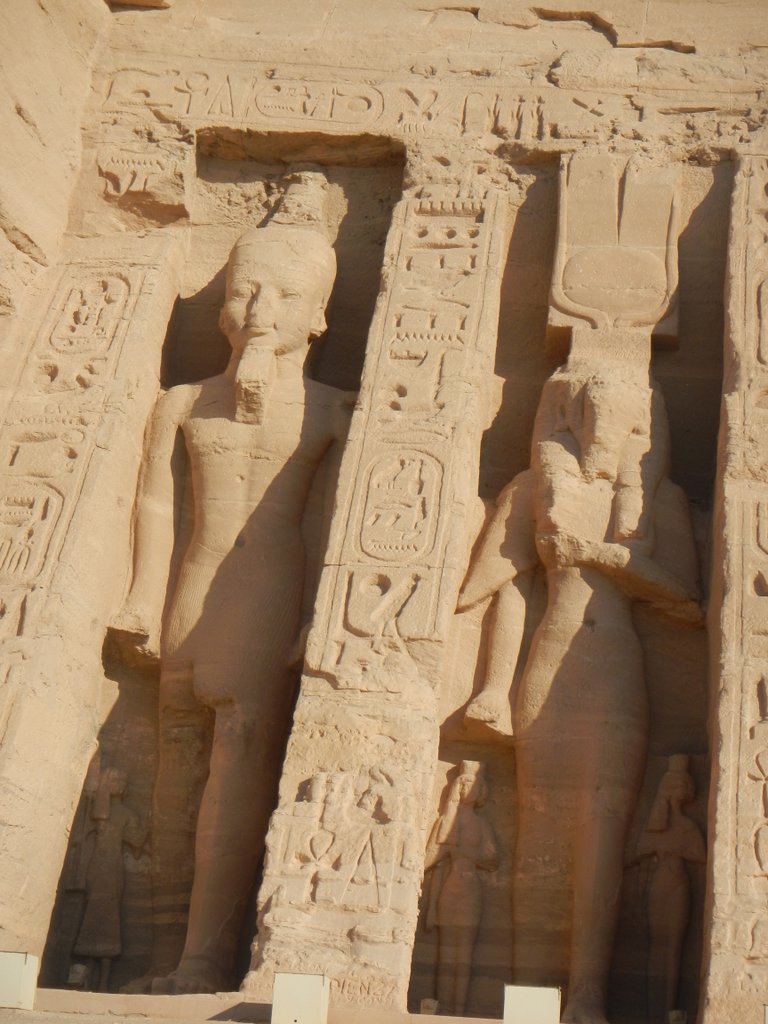 After exploring , it was back to the mini bus to take  the trip home , by the time we got back I was shattered , I took a shower and jumped into bed and slept like the dead .

I was to spend 4 nights in Aswan waiting for Victoria’s arrival in Egypt , so I spent my time walking the corniche , once bustling with the tourism trade now just dust and litter with hawkers of every kind not letting up . My friend , my friend you want , you want and so it goes , not making for a relaxing stroll along the Nile . I hardly saw any other tourists at all except for those I would meet in my hotel two days into my stay. The Nile river boats parked four deep all moth balled , looking as if the world had come to an end and they the only proof of civilisation  . Aswan really felt forlorn , I kept thinking to myself , Egypt made famous by its ancient ruins and now seems to be falling into ruin . The vanity of its Pharaohs still alive with the act of keeping their town neat and tidy beneath the locals  . I felt saddened by what I saw. 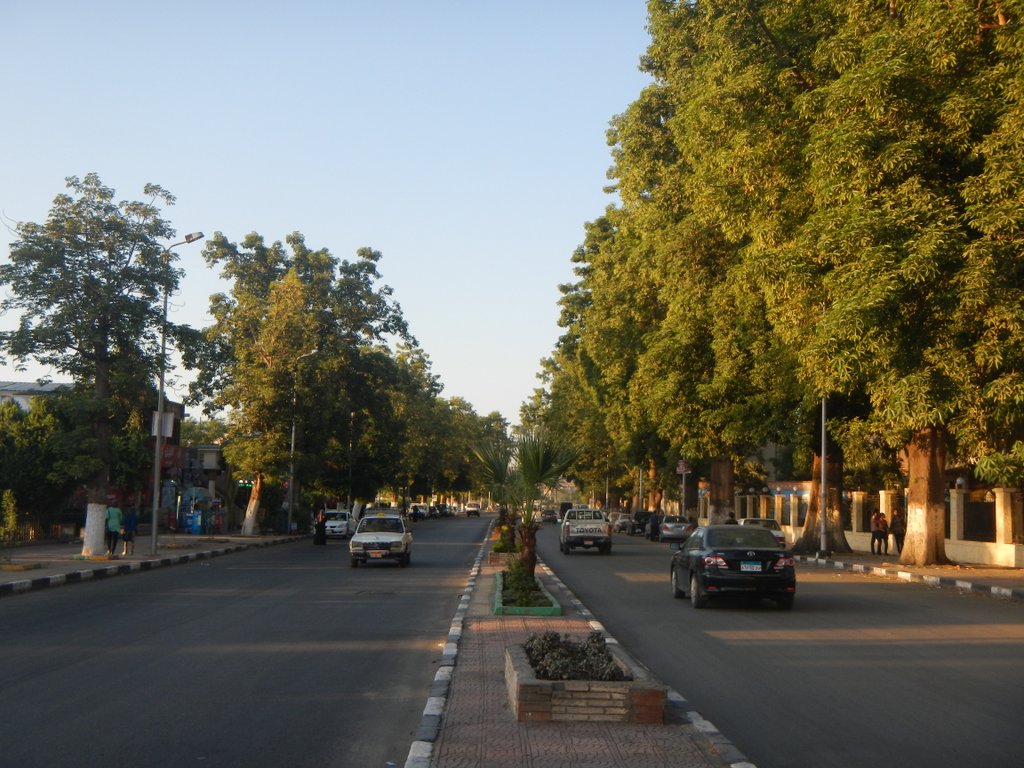 Main road along the Nile in Aswan . 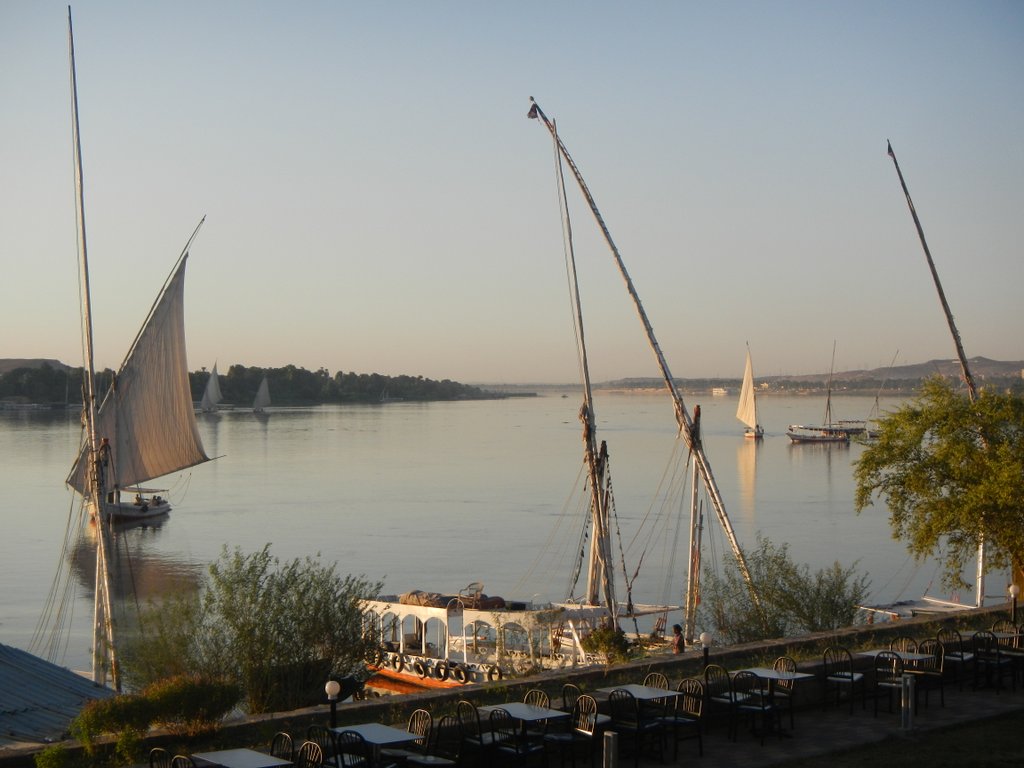 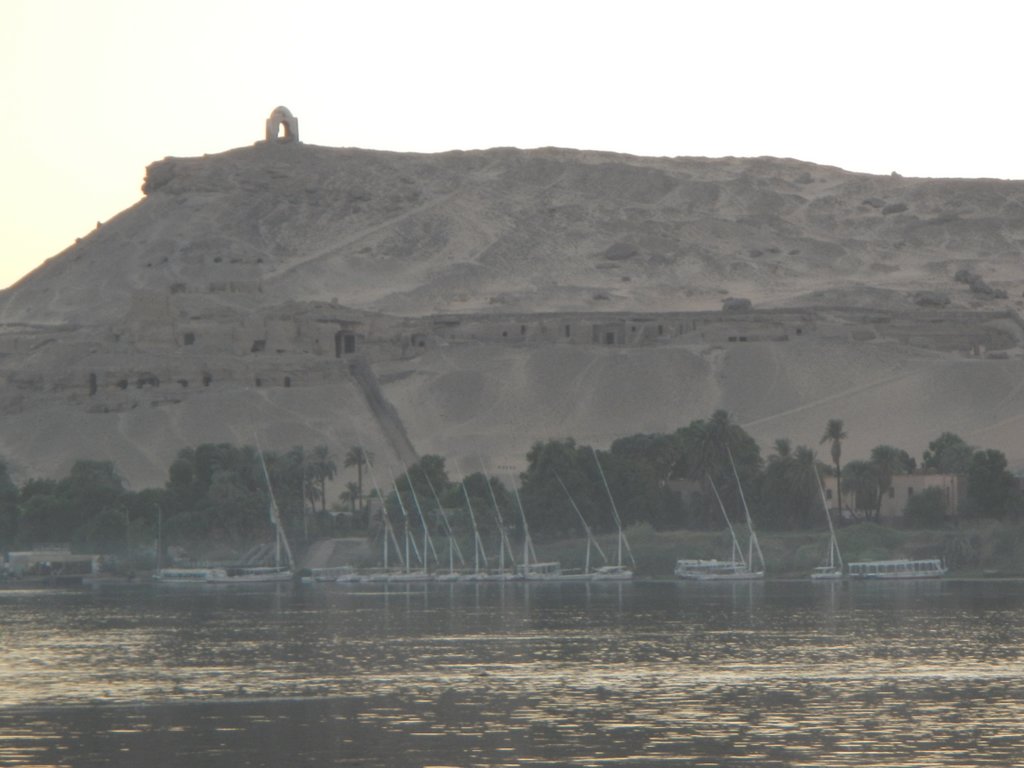 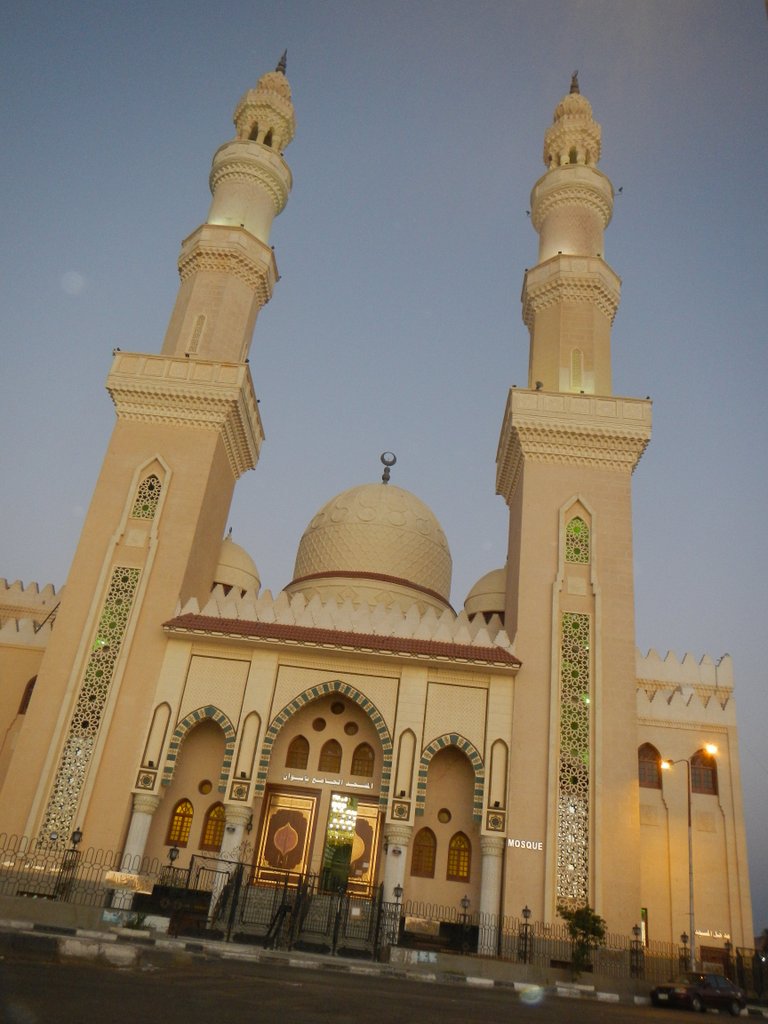 The next morning at breakfast I met up with the Russian contingent driving their Chevrolet around the world in a year and David riding his bike south , so we hung out for the day trading information and doing what over landers do when together, chat , chat and chat. That afternoon we decided to enjoy the Nile powered by the wind so we set sail and took a boat out to enjoy the sunset and have a traditional Nubian dinner which was spectacular . I so enjoyed the company of other travellers and we spent the next two days in each others company. 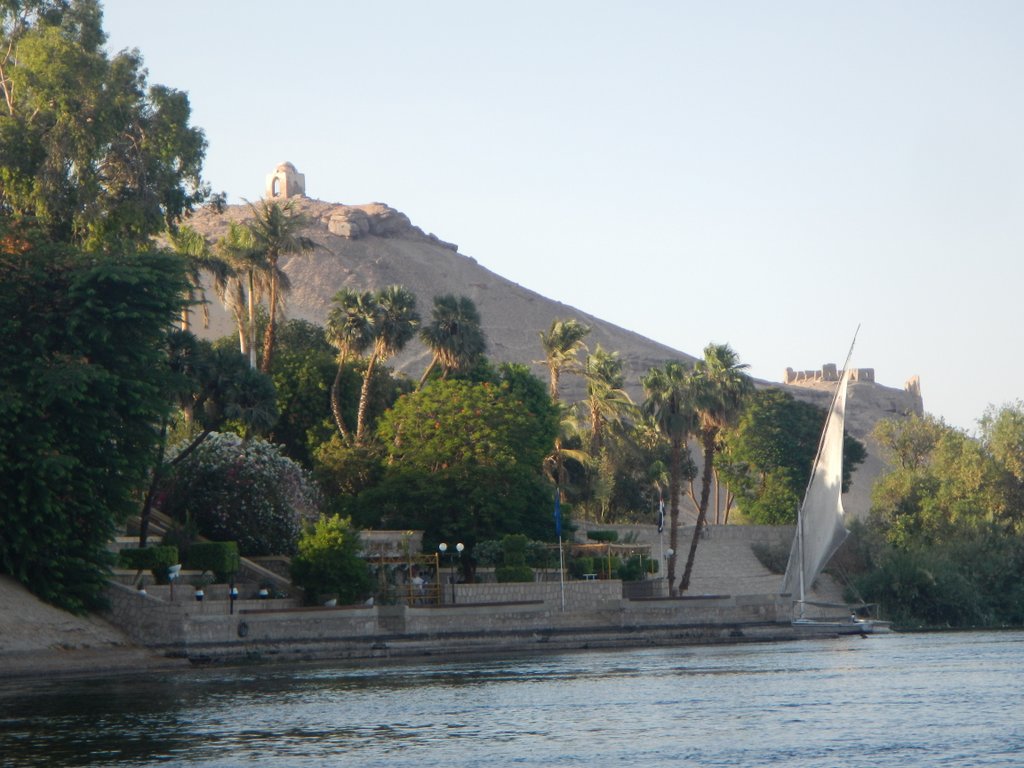 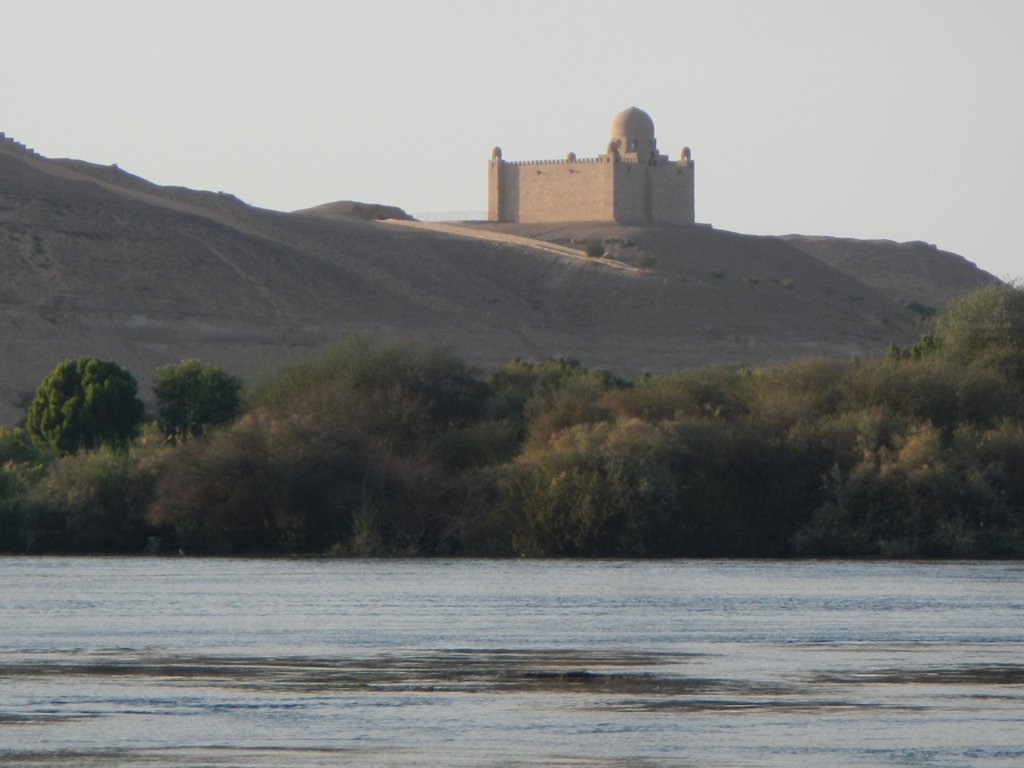 Home to the Aga Khan , while in Egypt . 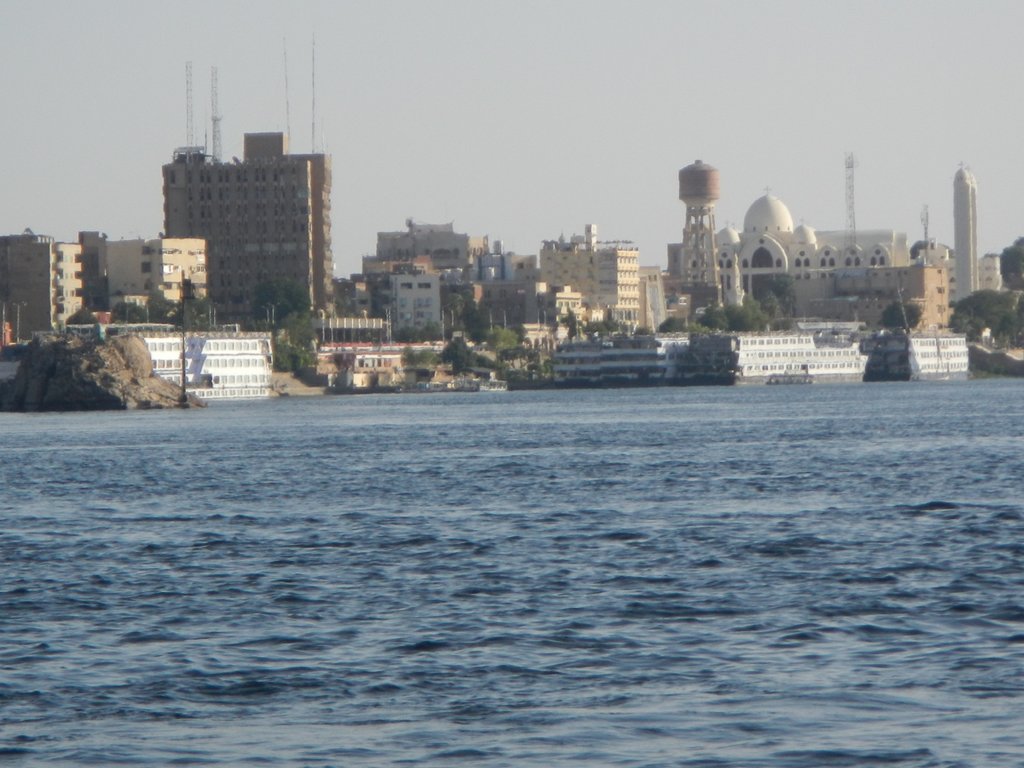 Aswan corniche from the boat . 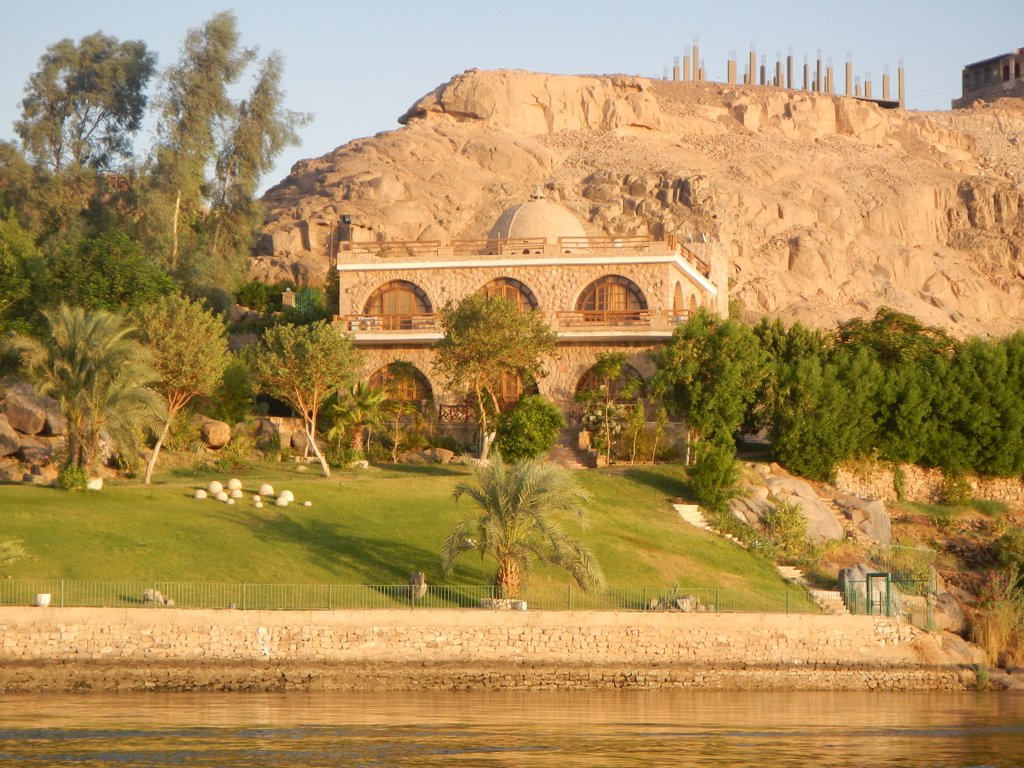 Private villa along the Nile. 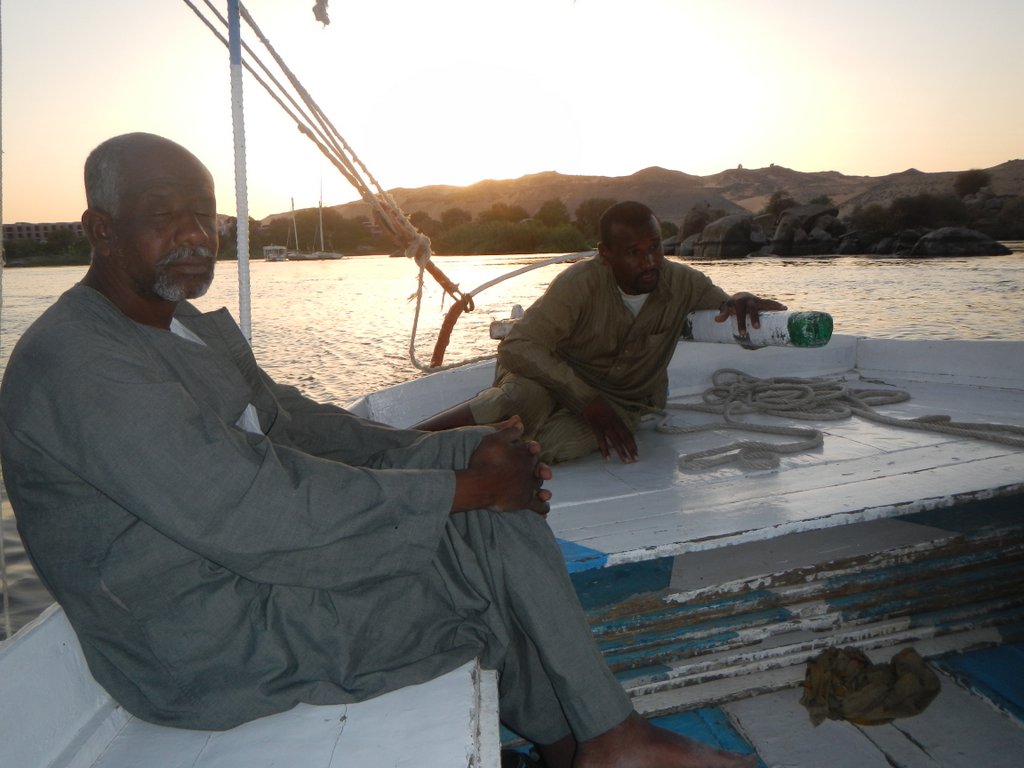 The crew at sunset .

I was up early , Victoria had arrived and Kamal was coming to collect me so we could free her from customs , this was to be one of my most frustrating days in living memory , dealing with Egyptian bureaucracy is torture , even with a fixer it took 6 hours to free Vic . What makes it so frustrating is that it took 6 hours to complete two forms of which I filled in one and to get a stamp in my carnet. This process in the past took around 5 minutes at other border posts , just unbelievable . Kamal then had to go to the traffic department get my registration plates , insurance and finally we could leave . 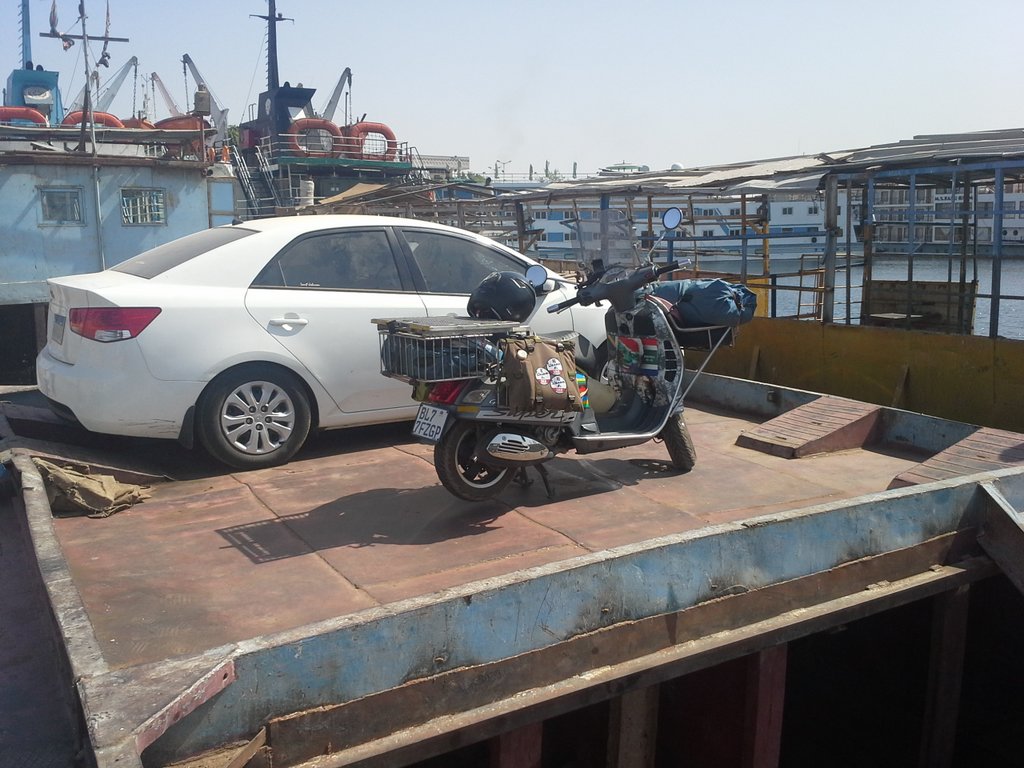 Victoria arrives in the land of the Pharaohs. 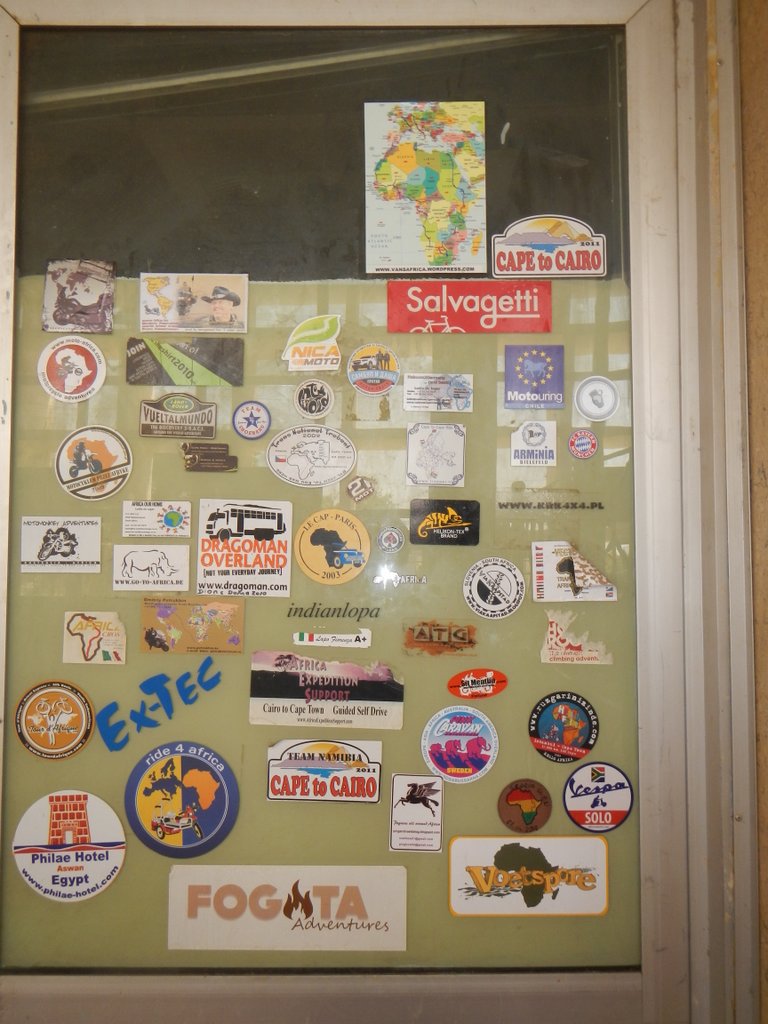 Proof I was here . 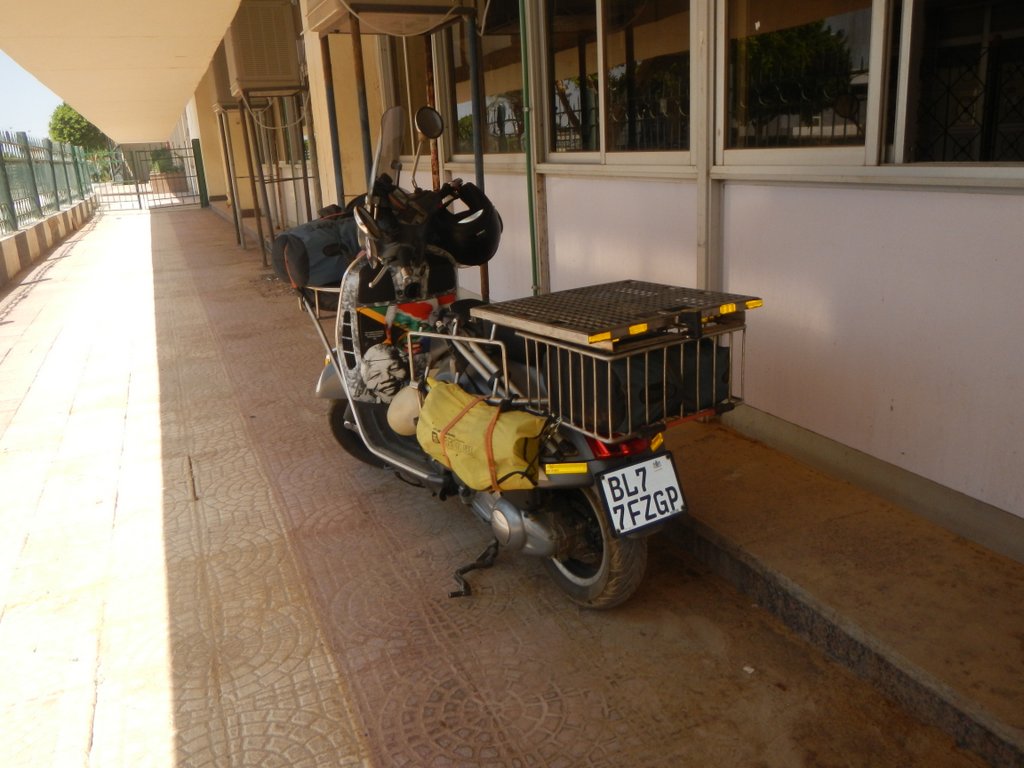 Finally back at the hotel , I did a routine check up on Vic and then took another long shower before meeting David for dinner . Off to bed to get ready for our ride up to Luxor .

I woke up early , packed the scooter and was on the road by 8h30 , it was cool and I only had just over 200 kilometres to ride . Then my ordeal started it took me three hours and around 60 kilometres of riding to find petrol , which I eventually found way past the airport on the road back to Abu Simbal , the entire town was out , I must have tried close to 20 fuel stations , finally now 11h30 we rode out in the heat of the day with Luxor in our sights . I took the road up that runs along the Nile which was to prove very slow due to the fact that it is full of very long trucks and speed bumps every couple of kilometres that bring you to a grinding halt . Some so steep they tickled Vic’ s under carriage . If this was not enough I must have been pulled over 5 times to check my documentation , what a long day it was . 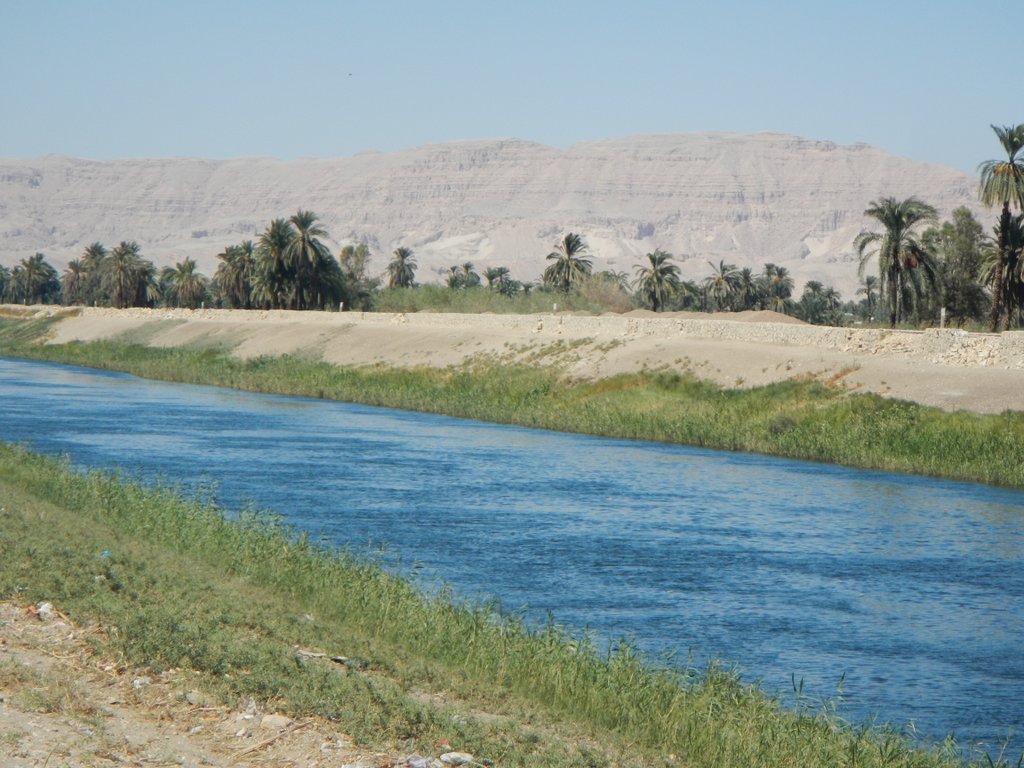 The ride up to Luxor .

Finally we arrived in Luxor , it would be another two hours before I finally got the scooter unpacked and the reams of paperwork completed to park Victoria with hotel security and me checked into my room . Showered and changed we watched the sunset over the Nile not even enough energy to go up to my room to get the camera  to capture the moment . Enjoying the orange of the sunset I matched it with the orange of my Fanta . Dinner and off to bed .

Much a done in a day

Off to visit the Queen

Farewell to a trusted companion