Leaving Khartoum was very difficult , it was so nice being in Peters home and out of the daily routine of pack and travel . I spent 5 nights being treated like royalty , nothing was to much and between Peters generosity , great sense of humour , Amira’s warm heart and  hospitality , I left under a cloud of sadness like I had not experienced on the trip to date . Always saying goodbye does put in perspective the transient state of life while on the road . I will hold my time in Khartoum close to my heart , for my heart was touched by two wonderful people who’s memory I do not want to let fade . Thank you once again my friends Peter and Amira .

The ride out of Khartoum was very busy and it took a good hour and a half to clear the city limits and find the open road , and my word was it to become the open road . The road soon finds the desert in all its wonder , vast , so very vast with the variation in landscape  not being the  vegetation but just differing colours of the sand  as you ride . 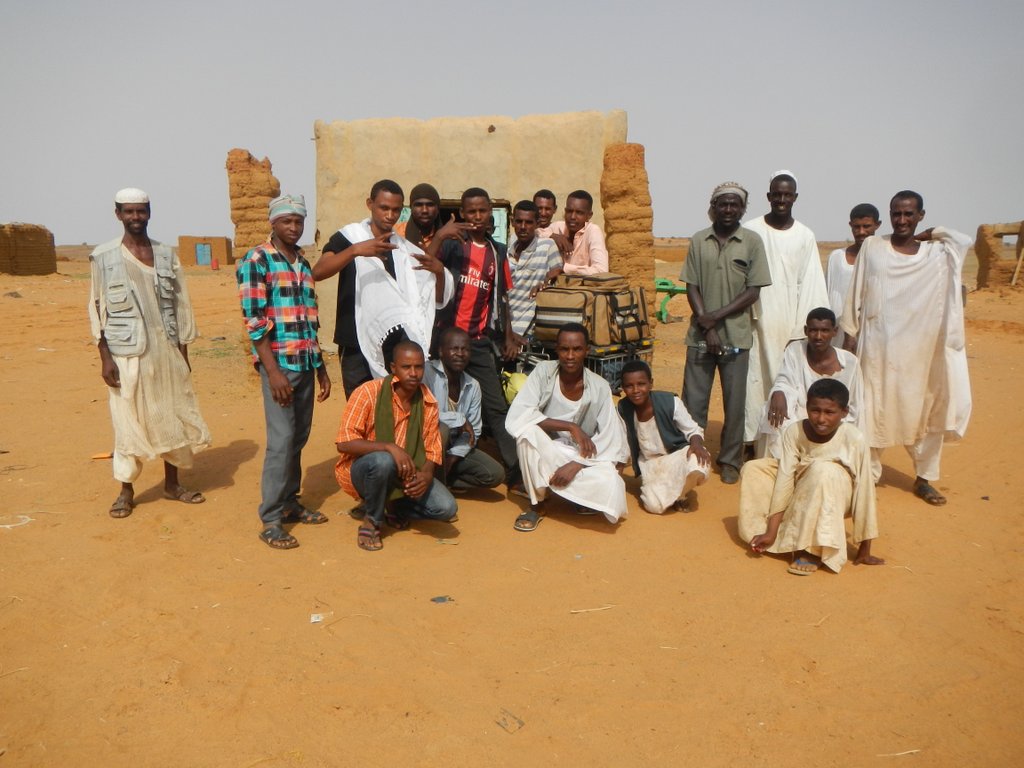 As you ride deeper and deeper into the desert so her heat robs you of your  strength , the powerful hot wind erodes your resolve , all the while the temperature rises . As the morning was lost to the fireball above I had to start wrapping up , I pulled my jacket zipper to the top , gloves pulled high ,  jacket sleeves pulled down and tied , buff pulled over my head and helmet sealed , this was cooler than allowing the hot air in . You ride in a sauna , sweat mists the visor , burns your eyes and the helmet sucks down on your head . I could not believe the heat , never mind the wind that comes howling at you , catching Vic and I off guard , just to frighten the living daylights out of us and forcing me to attention . 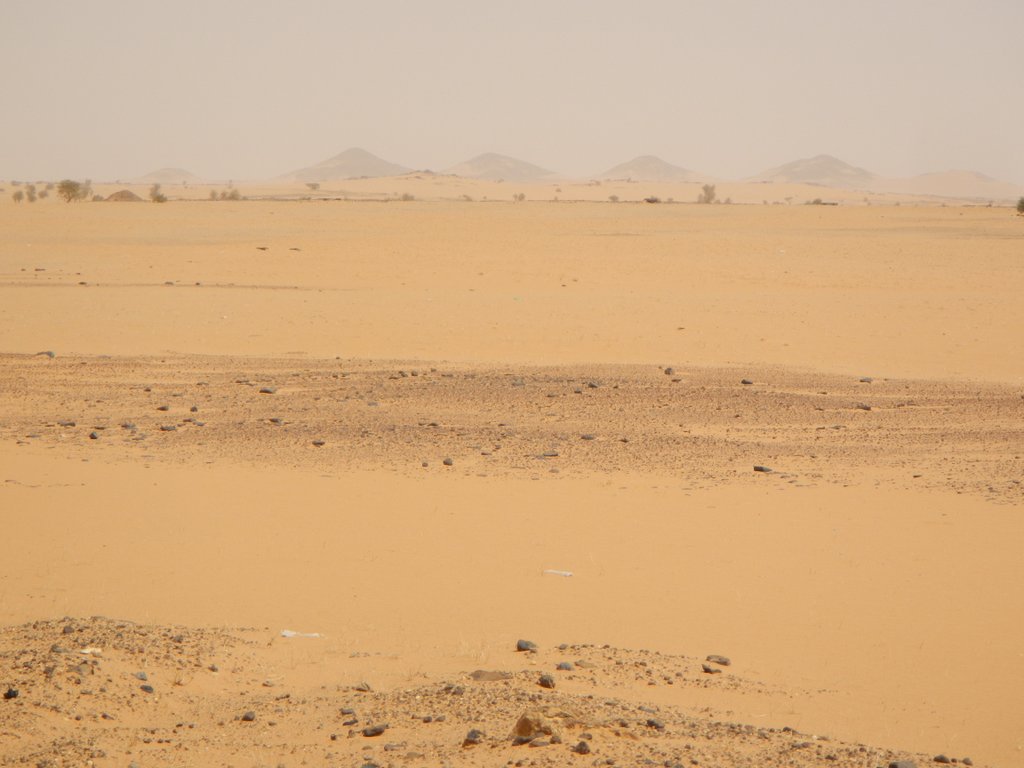 Fine and fresh the sand covers everything. 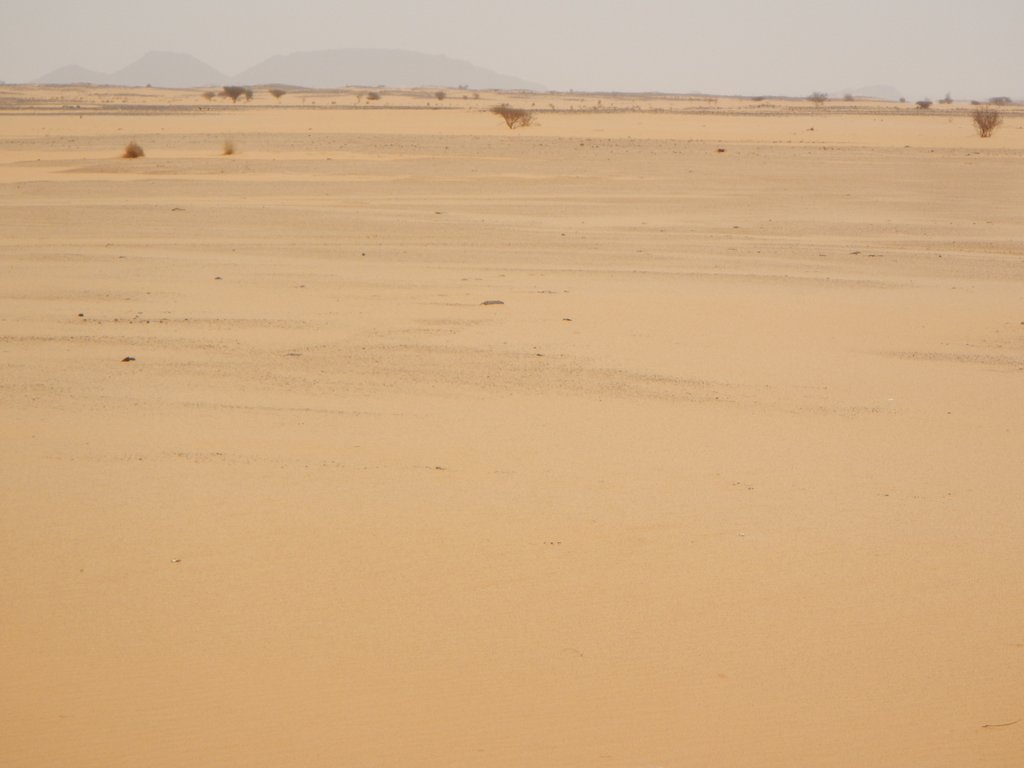 Nothing much to distract your eye. 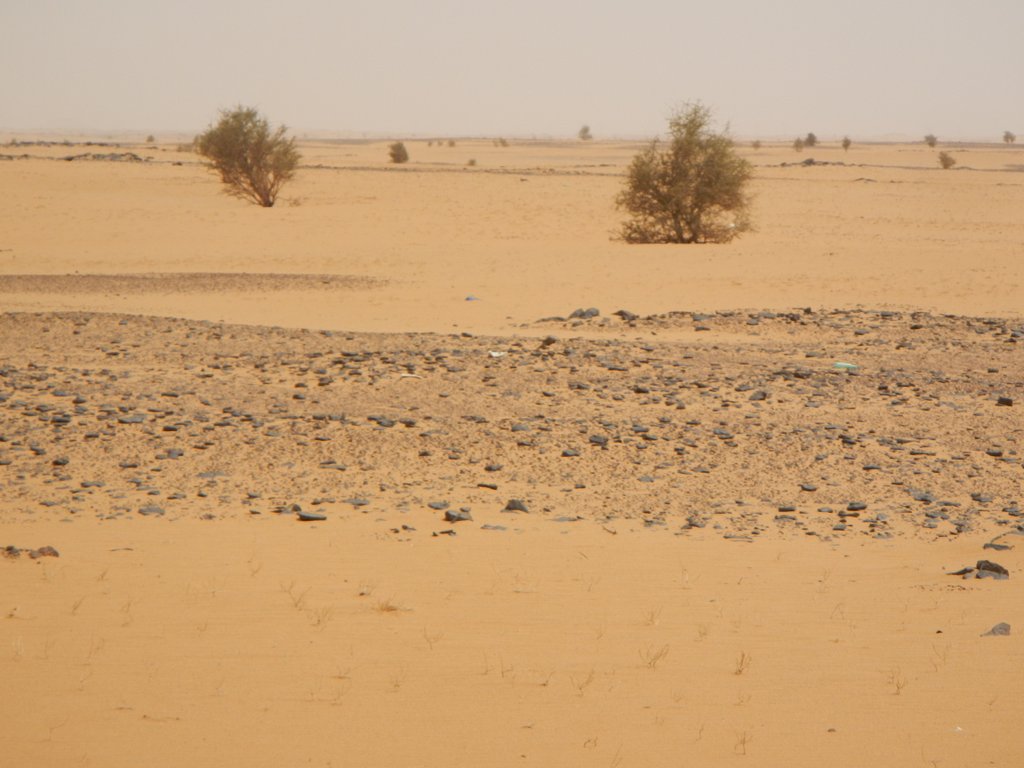 The ride was very tiring , I found myself stopping for fuel more often then usual as Victoria’s consumption had gone through the roof . The head wind was so powerful that  I was battling to get 150 km to a tank . It was so hot that when we stopped to re fuel I could not touch any part of the scooter without wearing gloves , the body work was ticking , every part exposed to the sun was cooked ,  hard to believe but the searing truth. The ride took the entire day to cover the 525 kilometres and was I glad to finally arrive in Dongola . 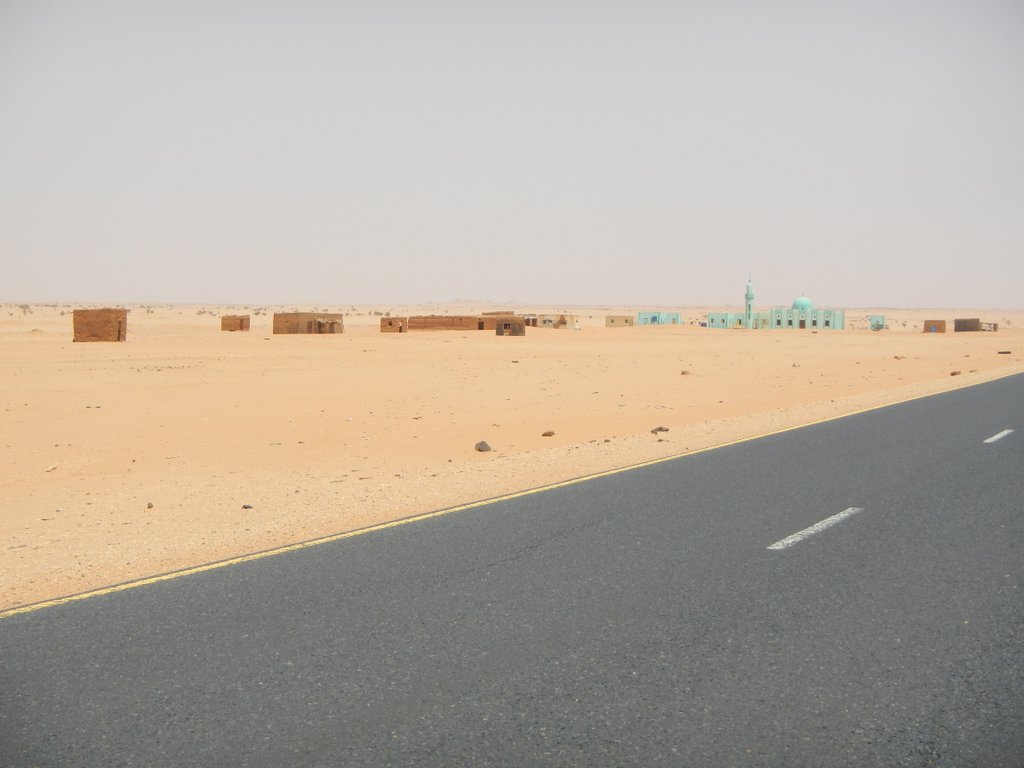 The ride up to Dongola . 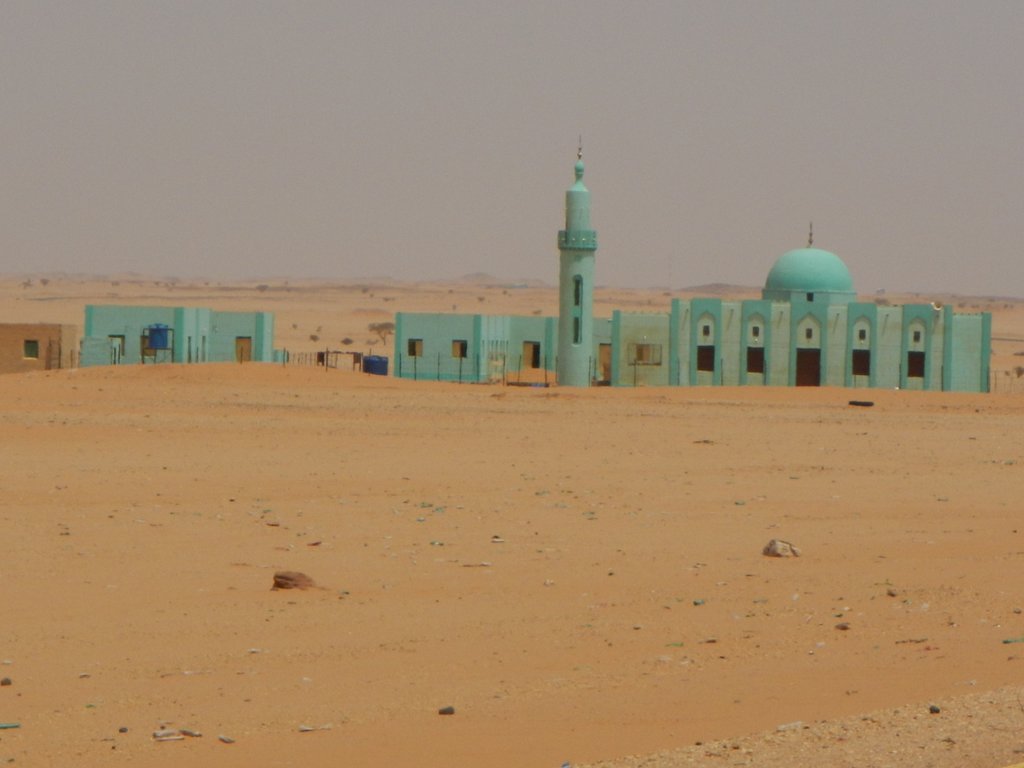 Some colour to break the bleak .

The guest house I had chosen , was no longer  so I rode around for a while then managed to find an hotel. Hotel Ola , I think that is what it is called , my Arabic really needs improving in every aspect . I booked in showered and took off to find dinner and the town. The Sudanese people are the most hospitable , I have ever met , they come and introduce themselves , I met families just while strolling the streets , I was offered food , tea on so many occasions I lost count , just incredible . It is so hard to comprehend , yet when here it seems so natural . 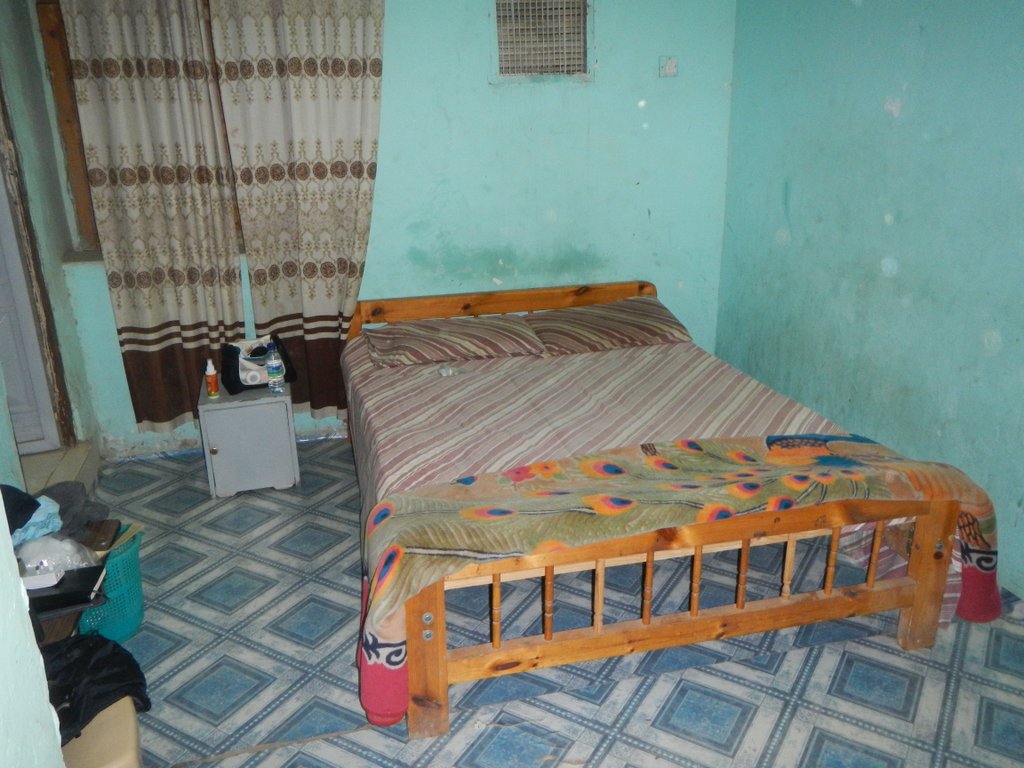 My room for the night .

I found a great restaurant , with a menu that was in Arabic , so how I ended up with a really tasty chicken pizza is beyond me , then back to the hotel , for an early night  . I wanted to try and get to Wadi Halfa before the big heat hit us , so it was to be a first light ride. 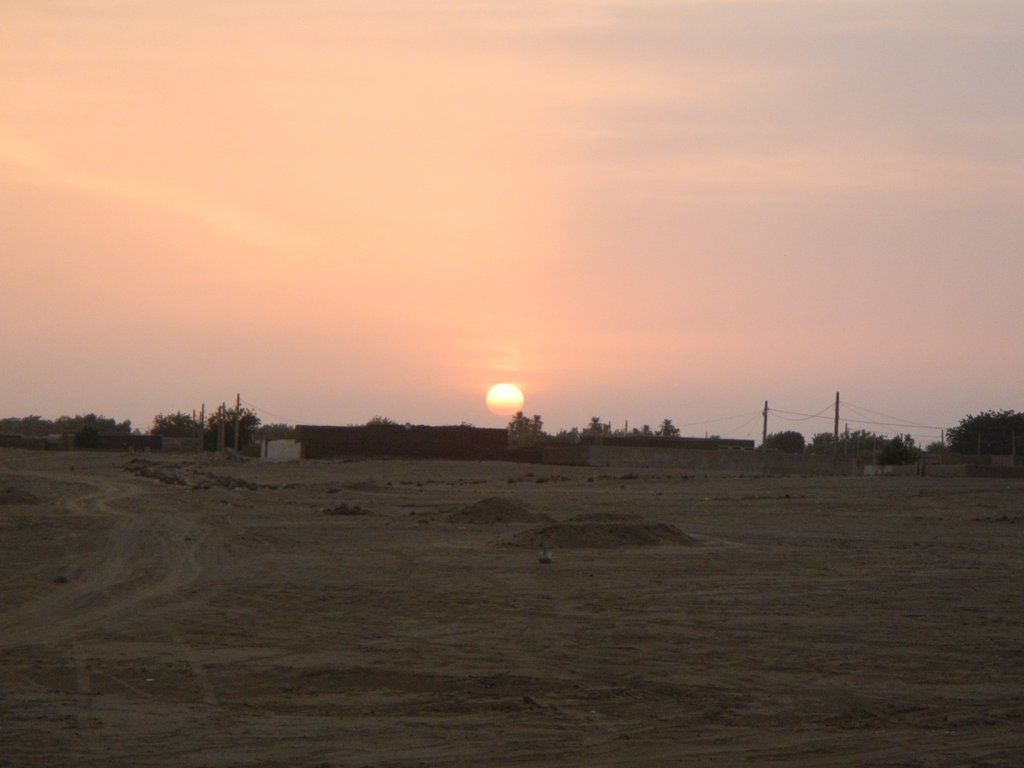 Sunrise on the road.

The ride up to Wadi  Halfa was a visual feast , the road runs along the Nile for the better part of the ride and as it snakes so you ride next to the beautiful lush green of the Nile , then find yourself thrown into the harsh desert with nothing but black rock dusted with  light pink sand or a beautiful jade green field of stone to your side , then back to palm trees and green. Yet all the while your nostrils are filled with the smell of the desert sand. 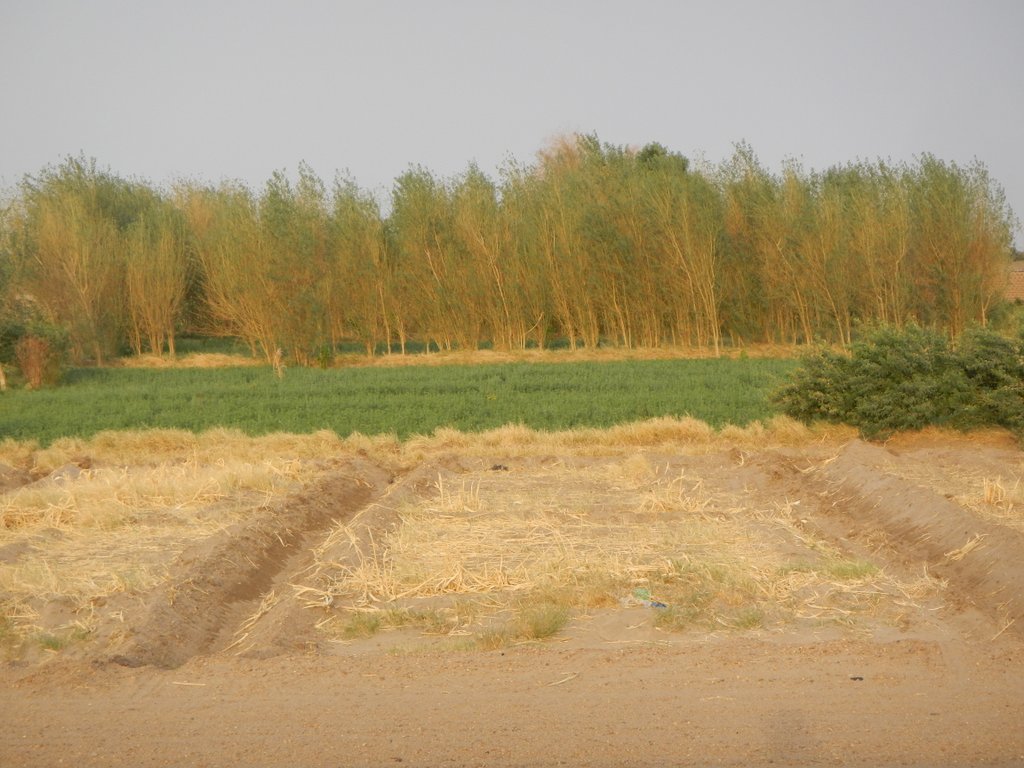 On your left the lush , cool green. 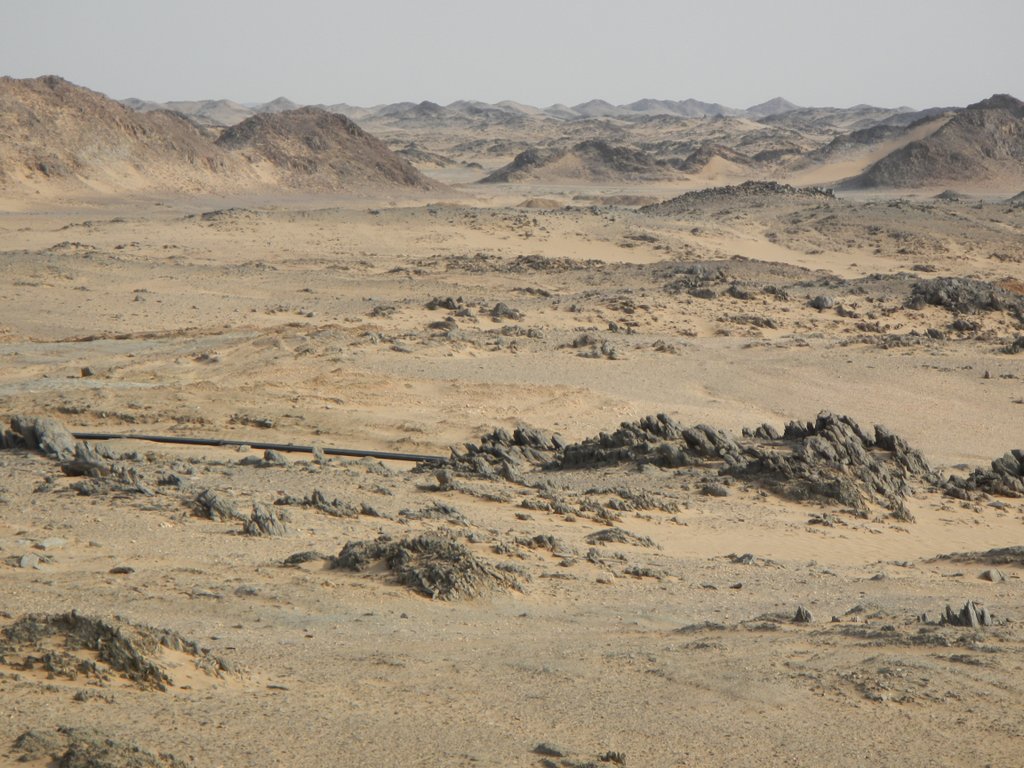 On your right the harsh reality.

The ride up to Wadi Halfa was only around 420 kilometres on a fantastic road , but the wind came back to haunt our ride , you try and make yourself as  small as possible ,  you would think a guy on a Vespa deep in the Sahara would be small , not us , she found us , followed us and beat us , with a little more aggression than the day before . Consumption was worse due to the wind , and I feared  my neck might develop a power lifter look and feel , that been said the desert is intoxicating . 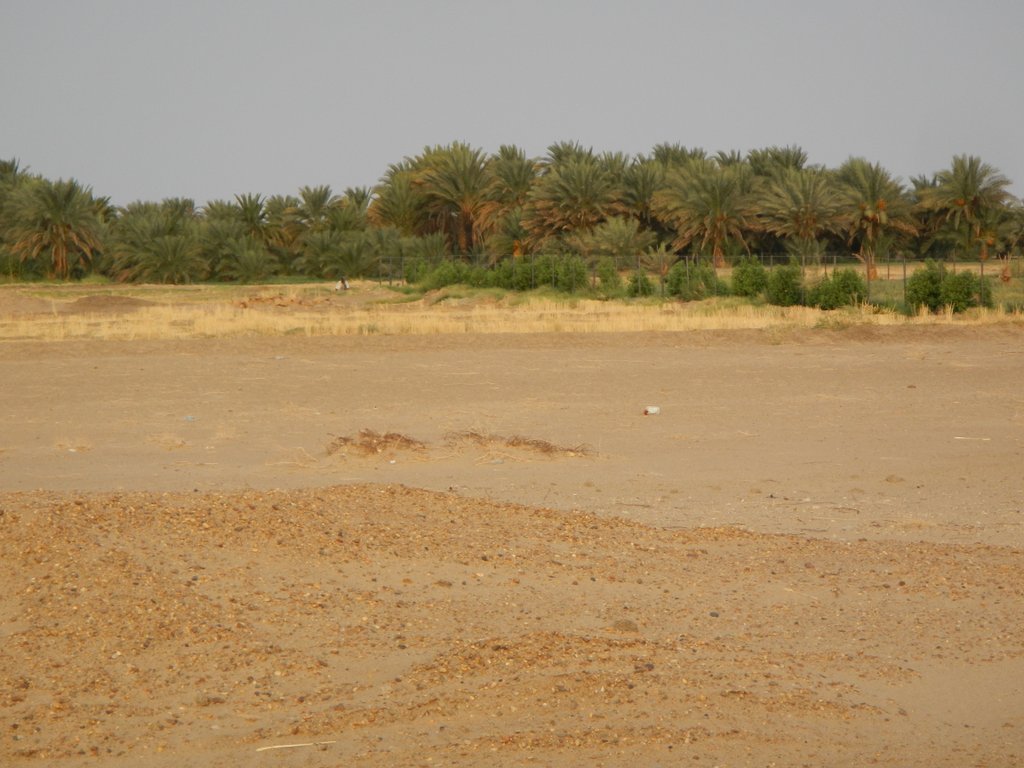 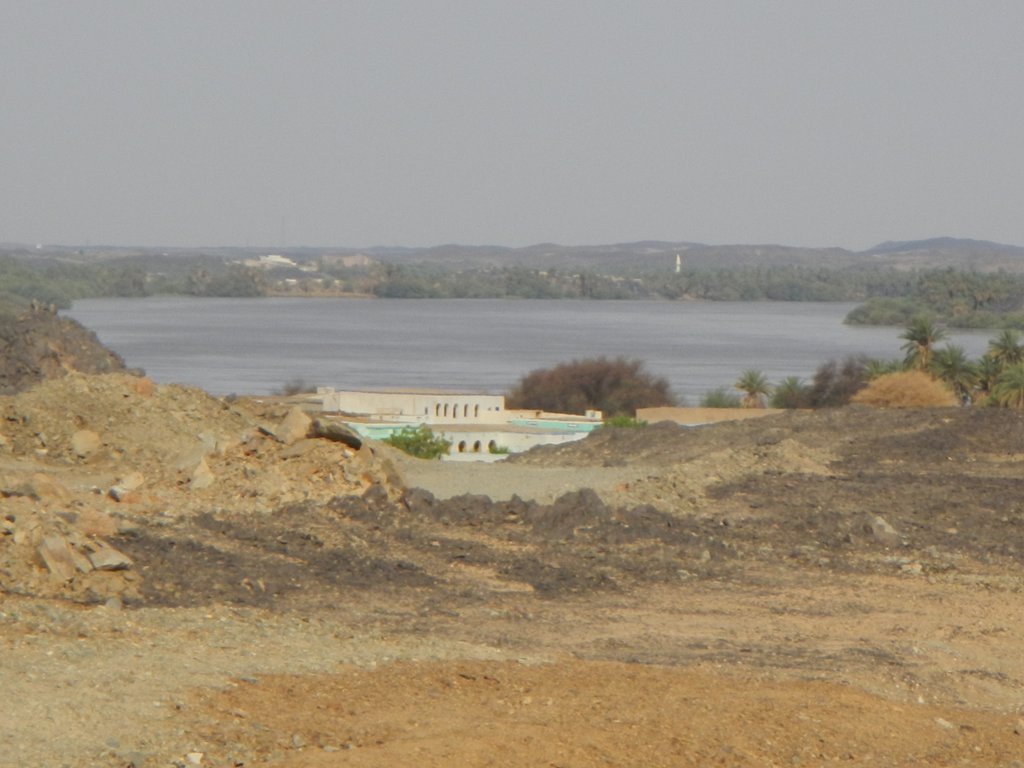 When you see the water , you fantasize about wallowing in it. 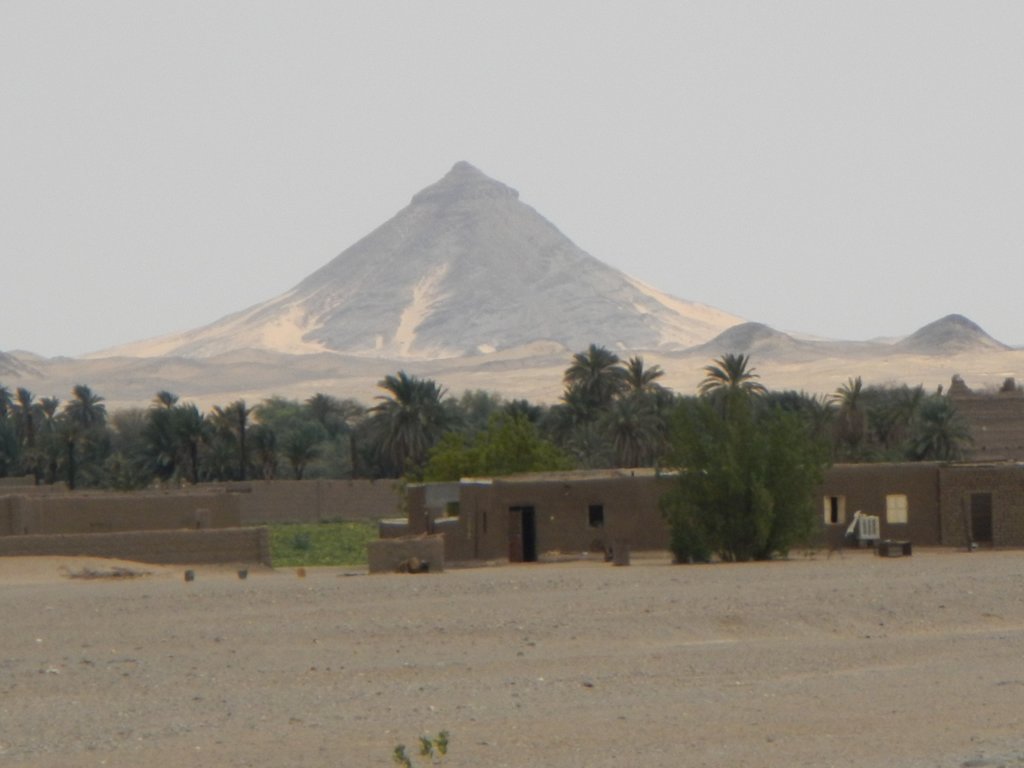 Beauty that makes you feel alive . 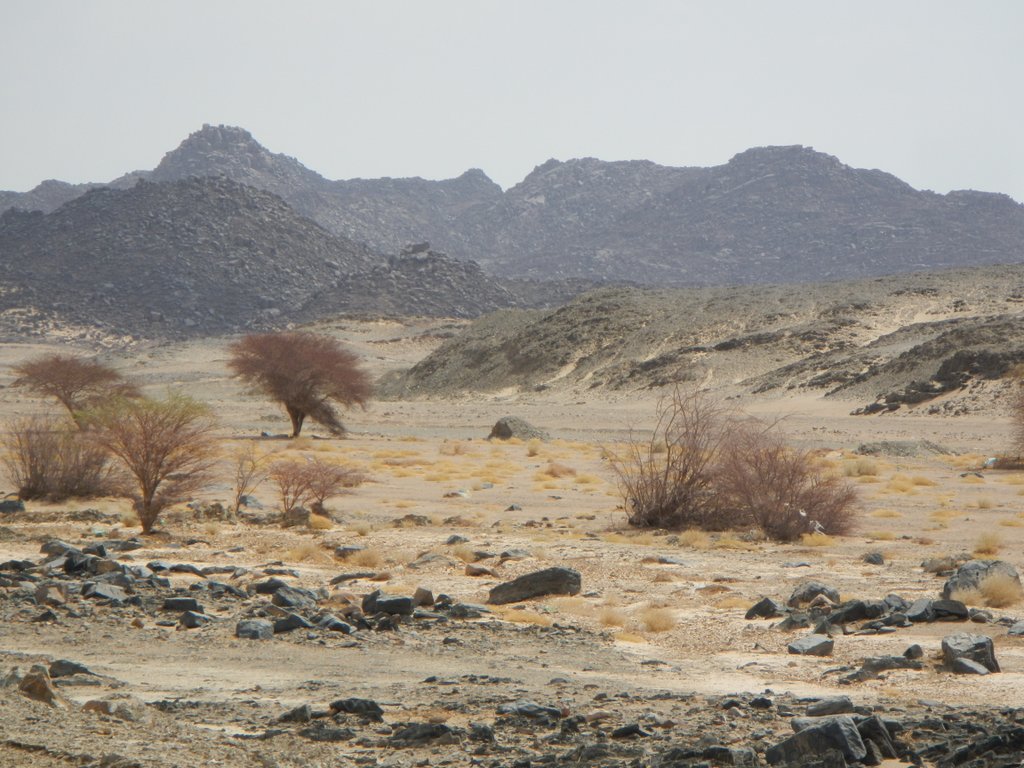 The road until about a 120 kilometres from Wadi does show signs of life as well as proof of life , then you find yourself deep in the Sahara with nothing but space , sand and sun , not a spot of shade , nothing , no movement  but the wind , no life except that of yours  which starts to feel very vulnerable  and you have to catch your mind from wondering to far , just 80 km to , just 60 km to go and so you count them down until you your wheels find a safe place for the night . 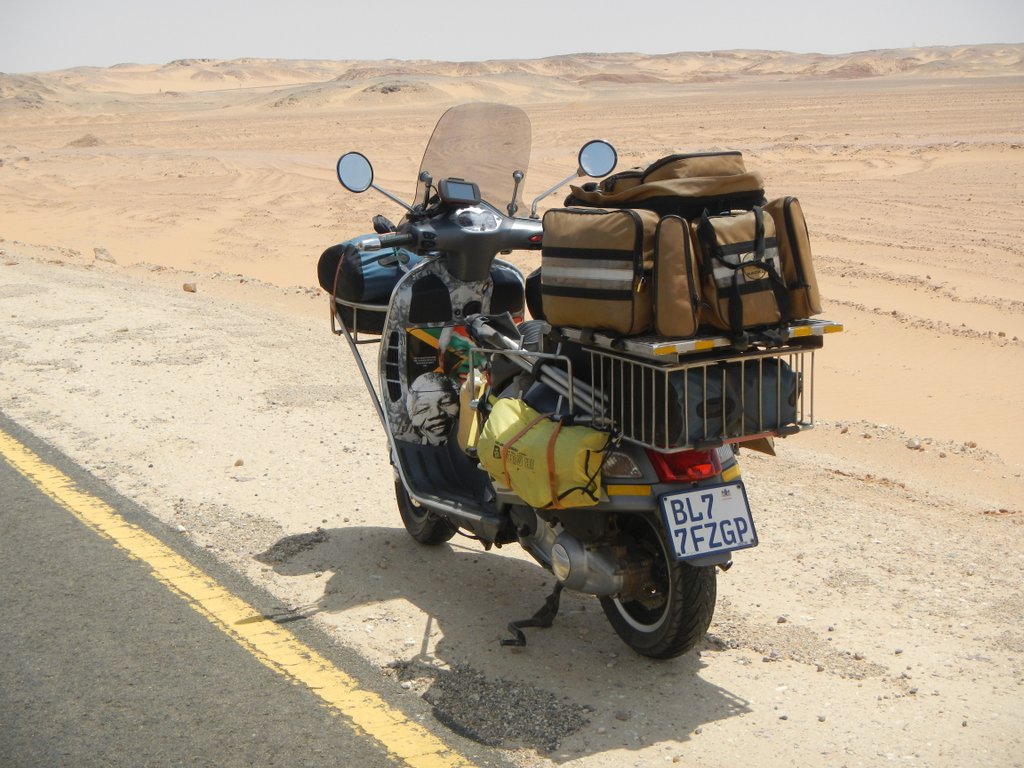 Victoria in the Sahara. 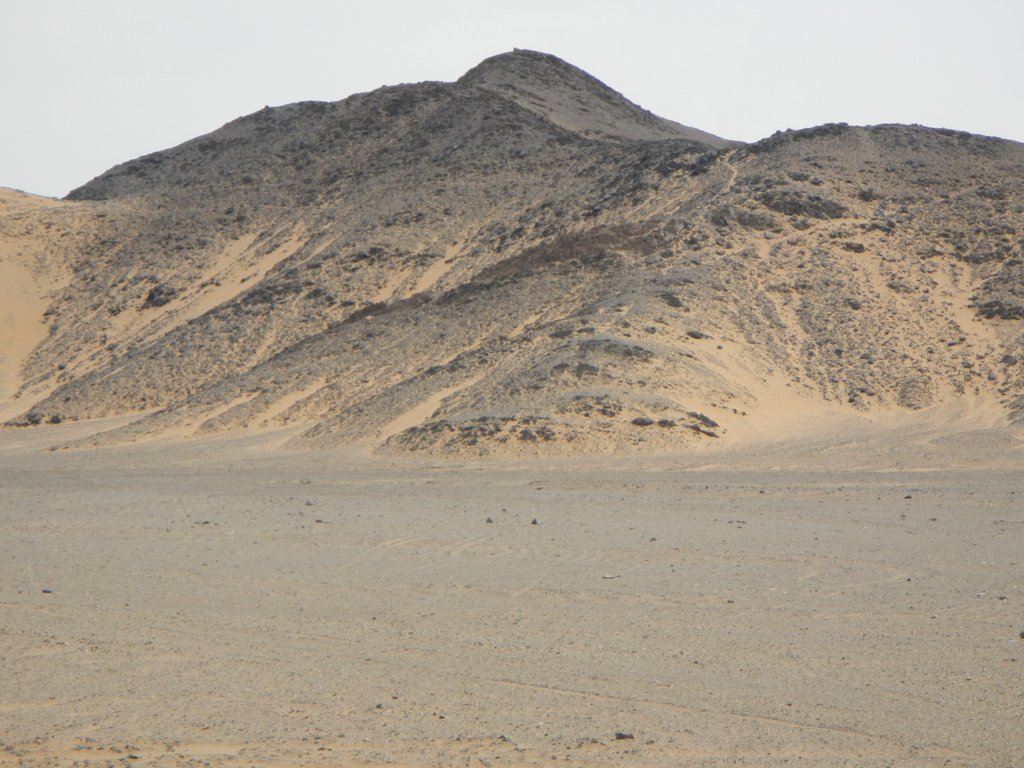 The black rock with pink frosting. 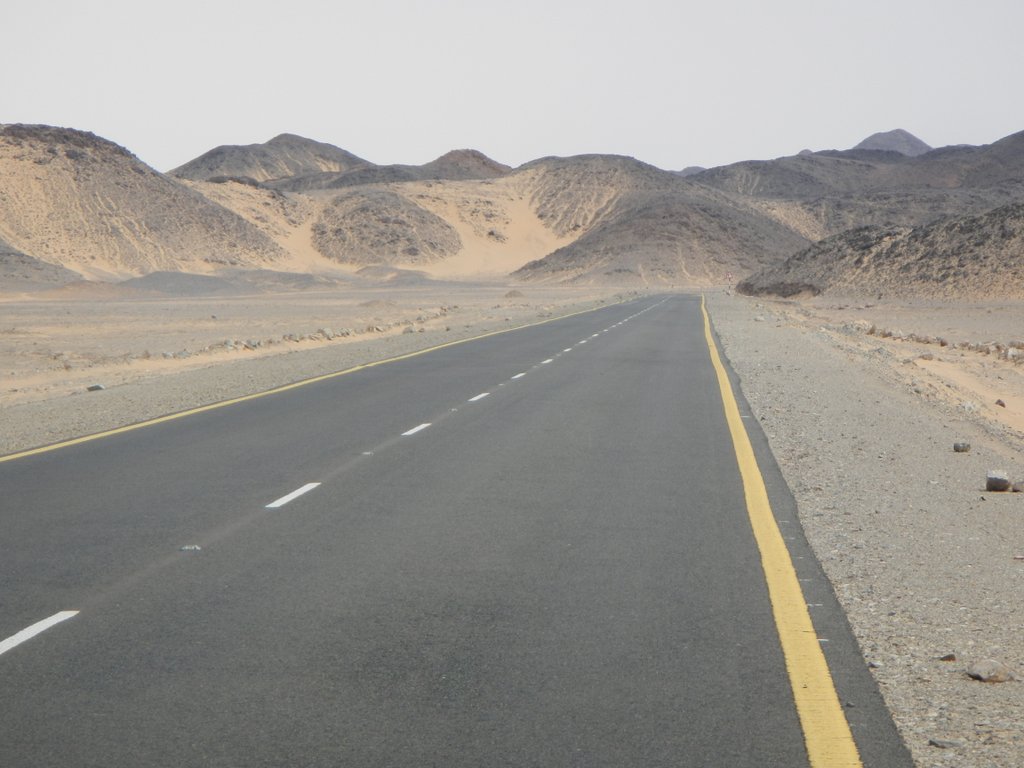 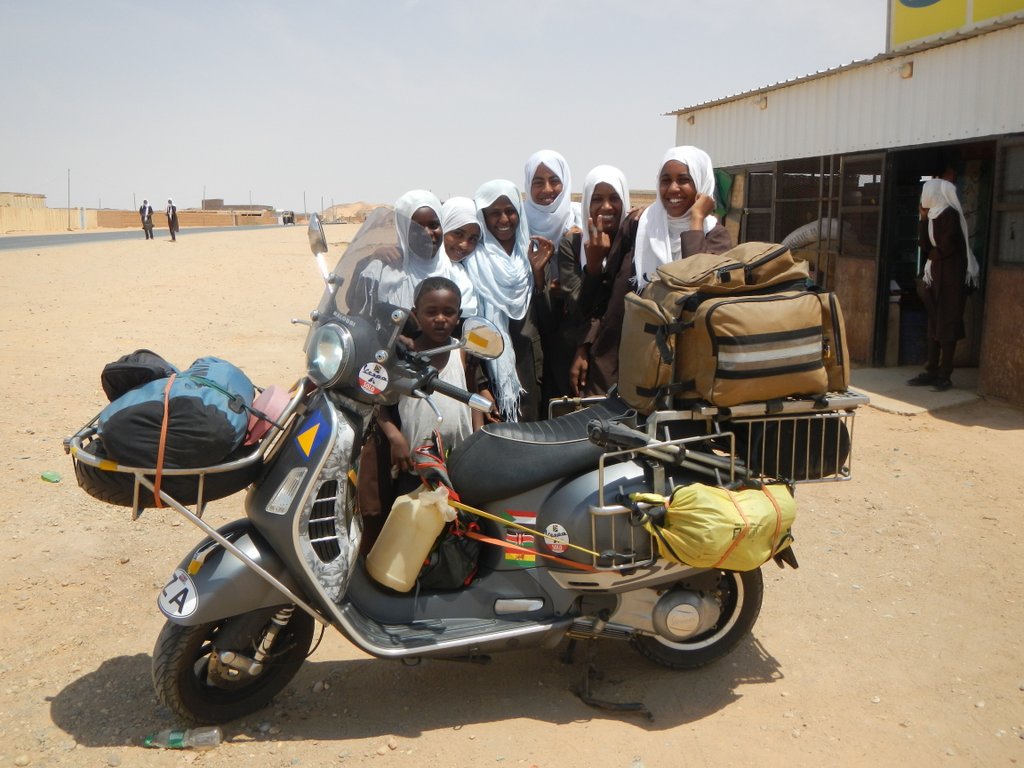 I arrived in Wadi to be met by Mazaar who is assisting me with the paperwork in getting Vic and I out of Sudan , on to the ferry and in to Egypt . I was so dehydrated by the heat that I stopped at the first shop I saw and downed two Fanta’s in very quick succession . What really shocks  me is that I never  drink the  fizzy stuff but up here I would kill for them , I think  the last time I had a Fanta , before arriving in the North was  over 20 years ago  At that moment in time the ice cold one had a similar feeling to winning the lotto I would imagine . Putting  life in perspective .

I am all settled in my hotel and enjoying the sounds of Arabic tunes as they blast from the restaurant kitchen , while I sip on sweet tea and meet and greet all those who happen by . The tea has cooled me down and washed the desert from body and mind , but the last two days of riding will be with me for a long while , they exhausted me , put fear into me , let my mind run free,  both to the beauty  and the  bad , the heat literally took my breath away , the wind my sanity , I hated every second while mother nature beat me , yet in the photographs I find a beauty and peace that wash the bad away and replace it with something different , a sense of wonder at this vast , magical and harsh place they call the Sahara.

So fed , rested , I feel ready to take on the 18 hour ferry ride that will start some time tomorrow in the afternoon , we set sail for Aswan and our 10th country we shall enter on Wednesday as we make our way to Italy . 18 000 kilometres we have travelled together , today the fourth month on the road takes us into spring in SA , I ordinarily would have my first swim to mark the day , yet here I sit in wonderful sweltering Sudan reflecting on a country made beautiful by its people and harsh by nature . 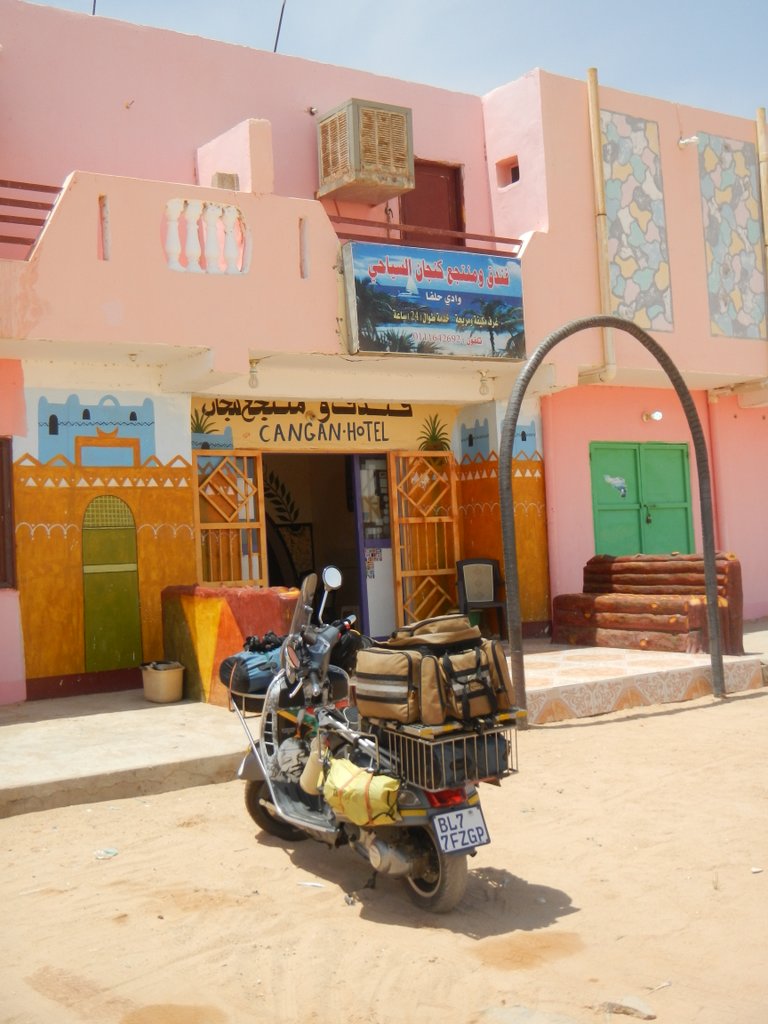 Vic outside the hotel. 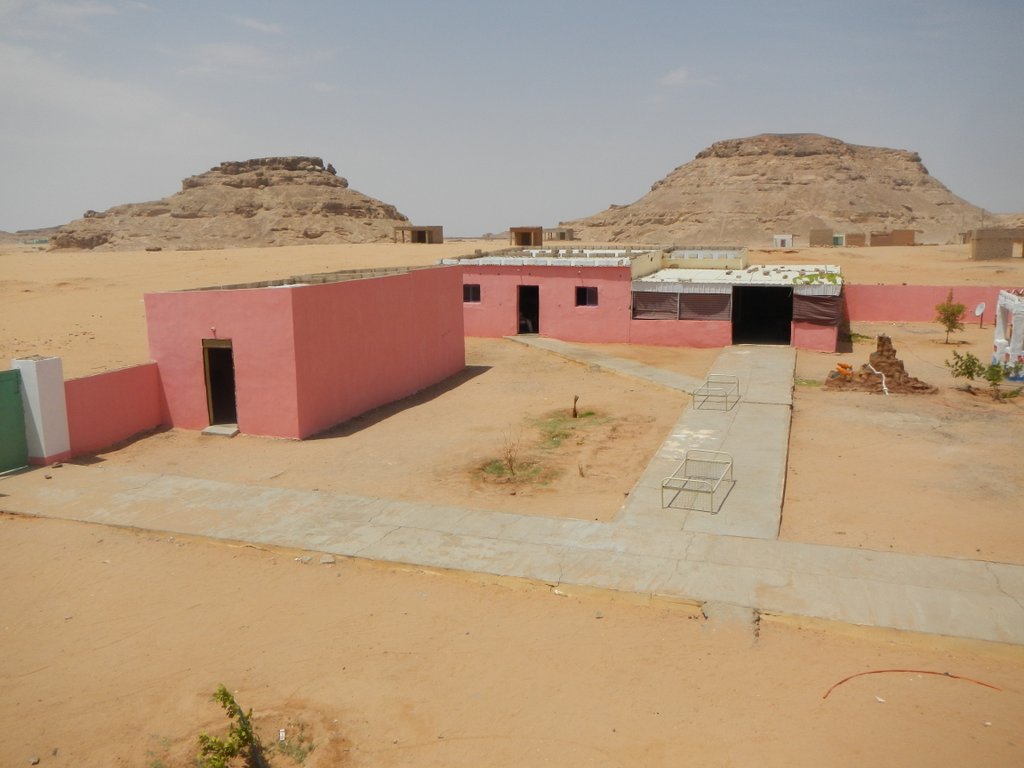 I will miss this place and will probably regret not spending more time here , but I do know that the heat and wind will take the memories I do have and deform them , so I will have to one day return in the winter to ride the route I planned . Thank you Sudan your people touched me deeply , your kindness unparalled   , your beauty harsh and dramatic.