Enjoying Singida as the sunsets , sitting across from the local bar I perused the very extensive menu which also sported local Tanzanian wine from Dodoma . In consultation with my very attentive waiter who every time I had a question about the menu would pull up a chair almost on top of me ,  explain in great detail what the dish was by running his finger under the name of the dish and reading it allowed to me , we made a great team huddled together over that menu in the soft light making choices with the intensity of a world summit.

The goat and salad was ordered the local wine passed  on by recommendation from Henry and I pointed to the starter that sounded fantastic . I settled in to enjoy the twilight . My starter arrived which only had the word chicken in common with what I thought I had ordered and to my delight was exquisite what ever it was , I wolfed it down hardly lifting my head from the trough so to speak . The last bit of  light fell as I caught a glimpse of a man crossing the restaurant  cleaver and meat in hand , all would be revealed in a few minutes . A fire was built the grid placed above the dancing flames , the sound of cleaver on meat and bone eminated from the barbeque room , was this dinner I wondered? An hour later this perfectly prepared crispy salad arrived and Henry gestured to the man in the room who in a flash produced my freshly prepared organically reared local goat , finger licking good goat mind you. While eating I spent time meeting and greeting the locals  who were staying in the motel , who took great interest in primarily Victoria and then my story as the solo scooterist .  I look forward to staying at the Stanley on my return as I make my way to the Tanzanian border with  Rwanda. I met such fascinating people doing so much for their country and with such pride in their nation that seems to reward in other ways other than those of a monetary nature . So off to bed , early to rise to make the final ride to Arusha. 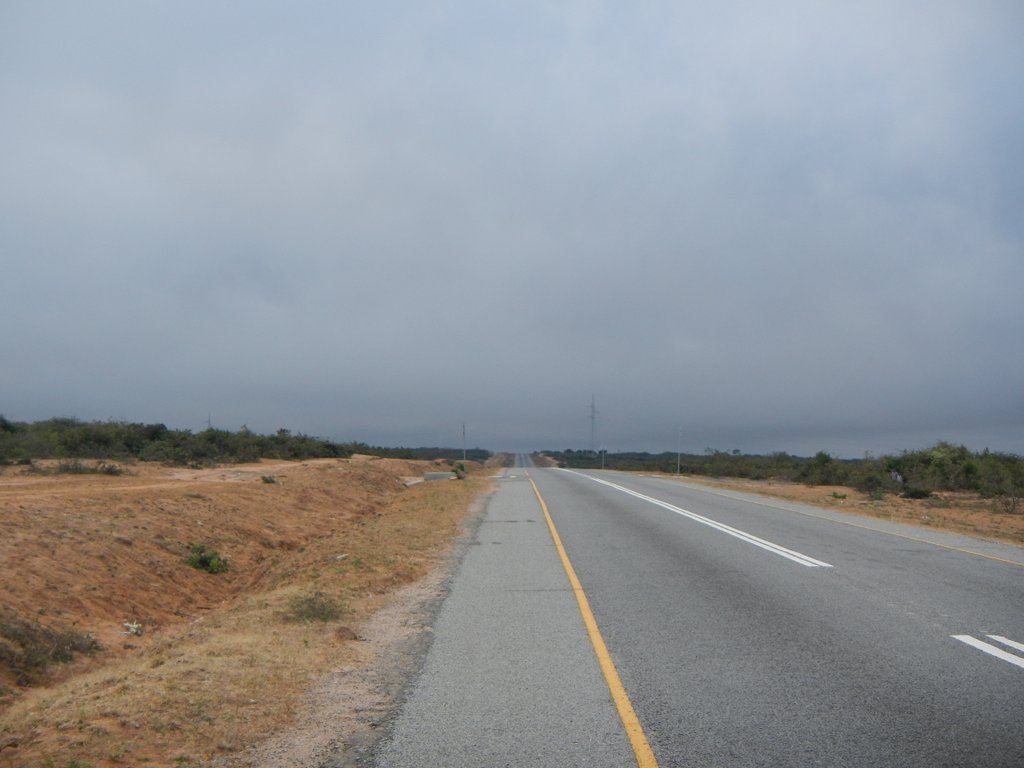 Rider on the storm

Finding unleaded proved difficult , once done  I was off to Babati and then Arusha  on a wintery day that made me miss my heated grips and left me huddled behind my little screen . A ride I look forward to doing again with the road taking you along the rift valley past mount Hanang , just the most intoxicating scenery with great tar and turns , Victoria and I had a ball . We arrived in Babati  the first town thus far that offered no unleaded , so off came one of the petrol bags to start the top up , with in no time  I was once again the topic of discussion , surrounded  by the friendly , enquiring and intrigued towns folk , so we chatted and discussed fuel consumption as well as the 160 km per hour top speed , once again this was put under the spotlight ,  spedo’s don’t lie , that been true in every sense of the word. Top up done , questions dwindled and stopped to be replaced by the sound of Victoria starting her motor and so we waved Babati goodbye. 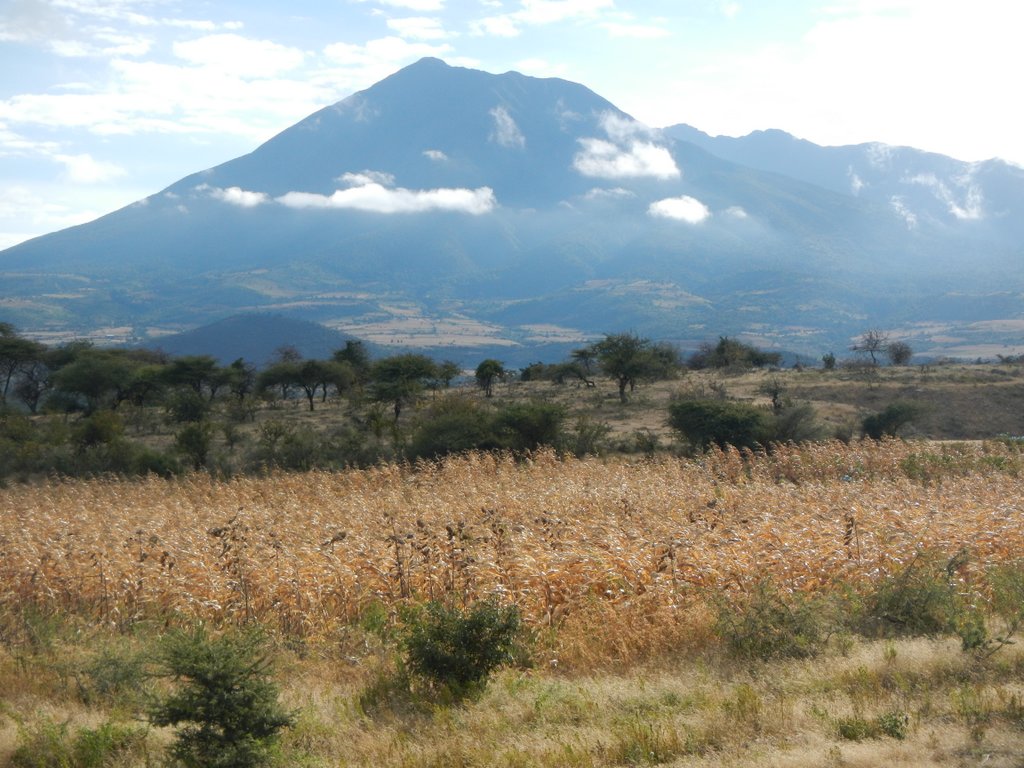 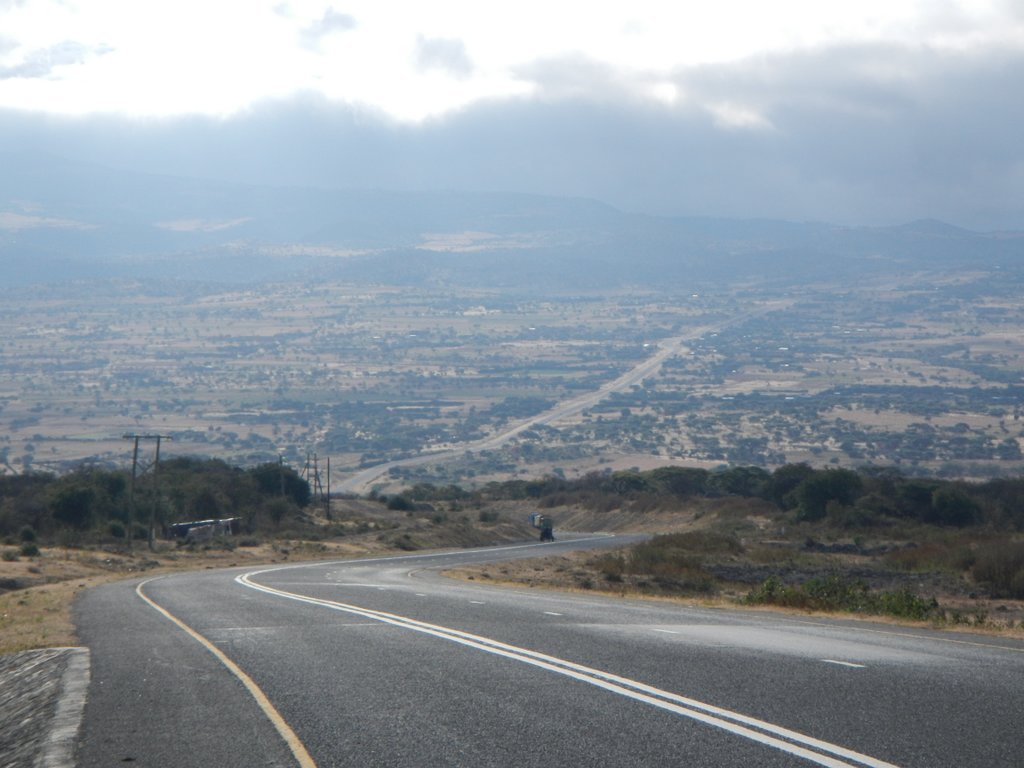 Coming off the escarpment

The ride to Arusha just got greener and the mountains started flattening out and the plains opened up as Victoria’s wheels rolled towards our next destination. 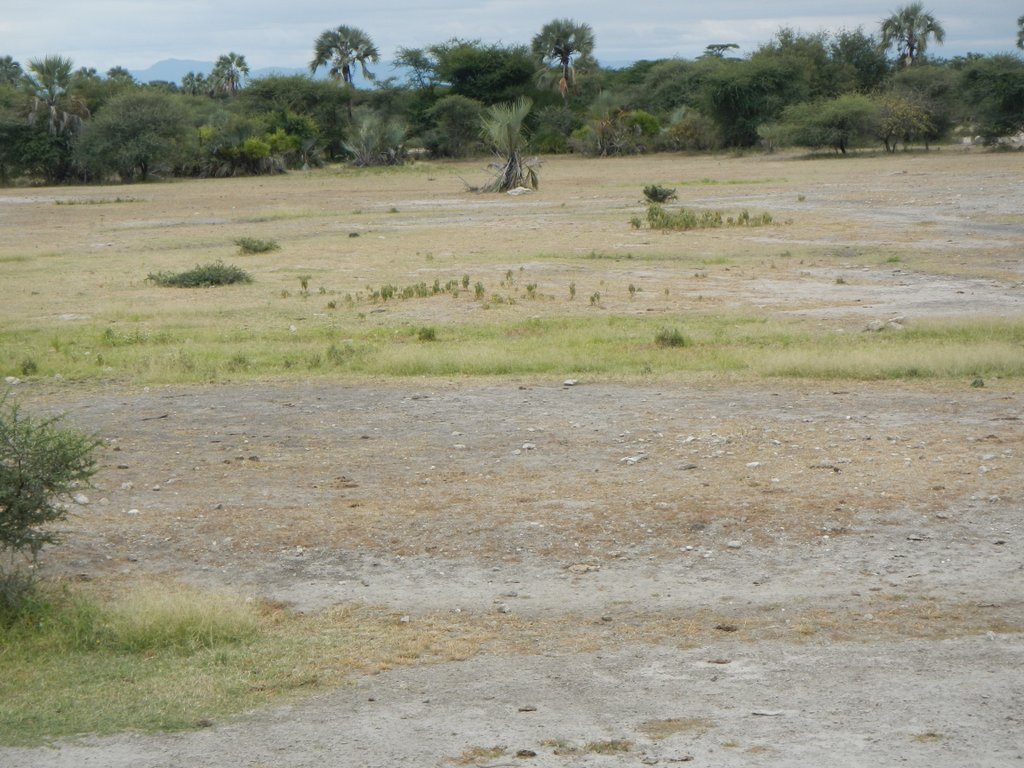 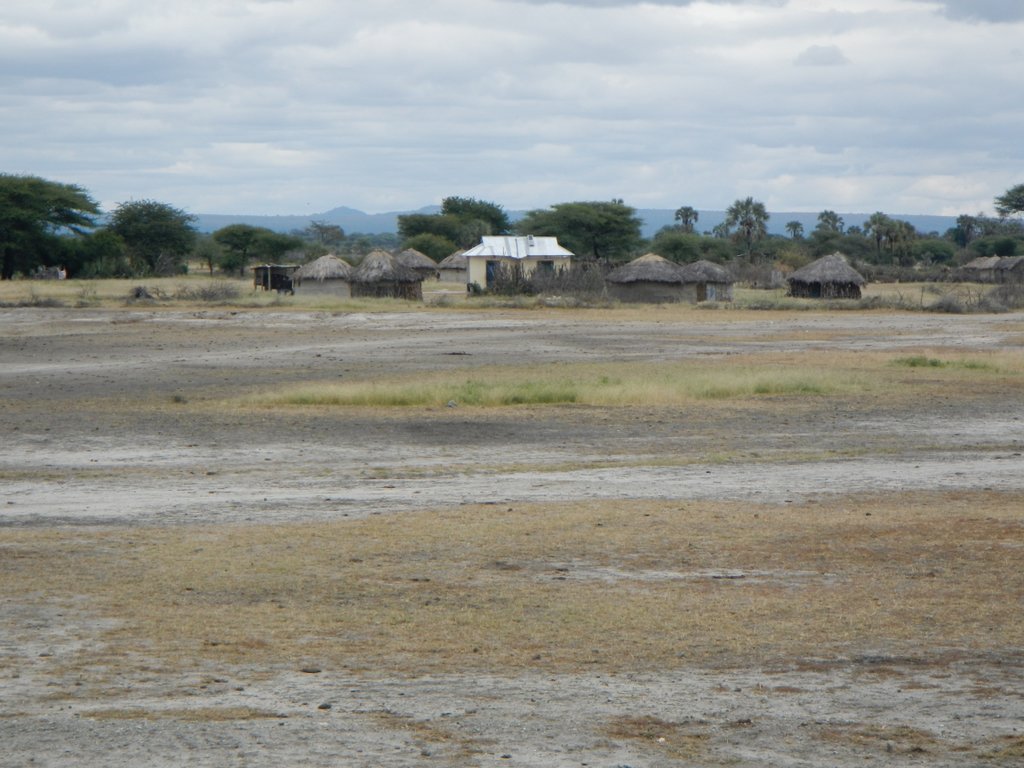 Masai Village adopting the old and the new.

Just outside  Arusha about an hour from safety I came across the demons of death , I had to stop to take a picture as I had never seen them stationary before . Still they stood those menacing eyes glaring , that I forever see in my lane. Halted briefly ,  pulled over by the weigh bridge they idle , motors rumbling waiting for the flag to drop so they could once again enter the race of speed and destruction. 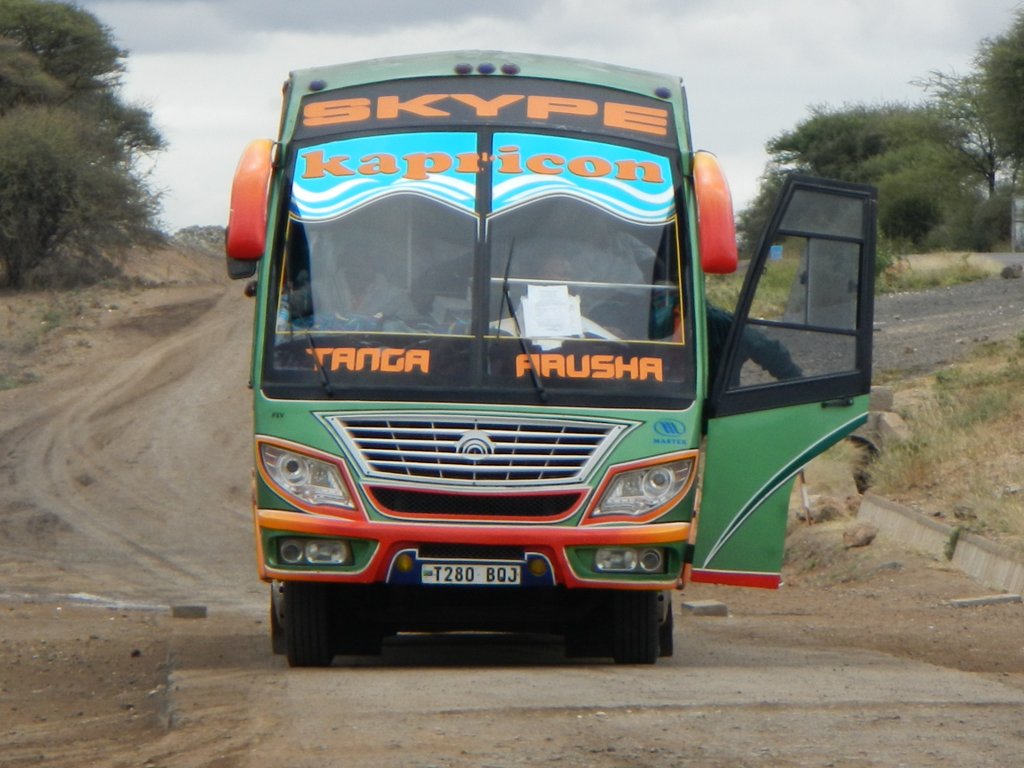 Those eyes will haunt forever . 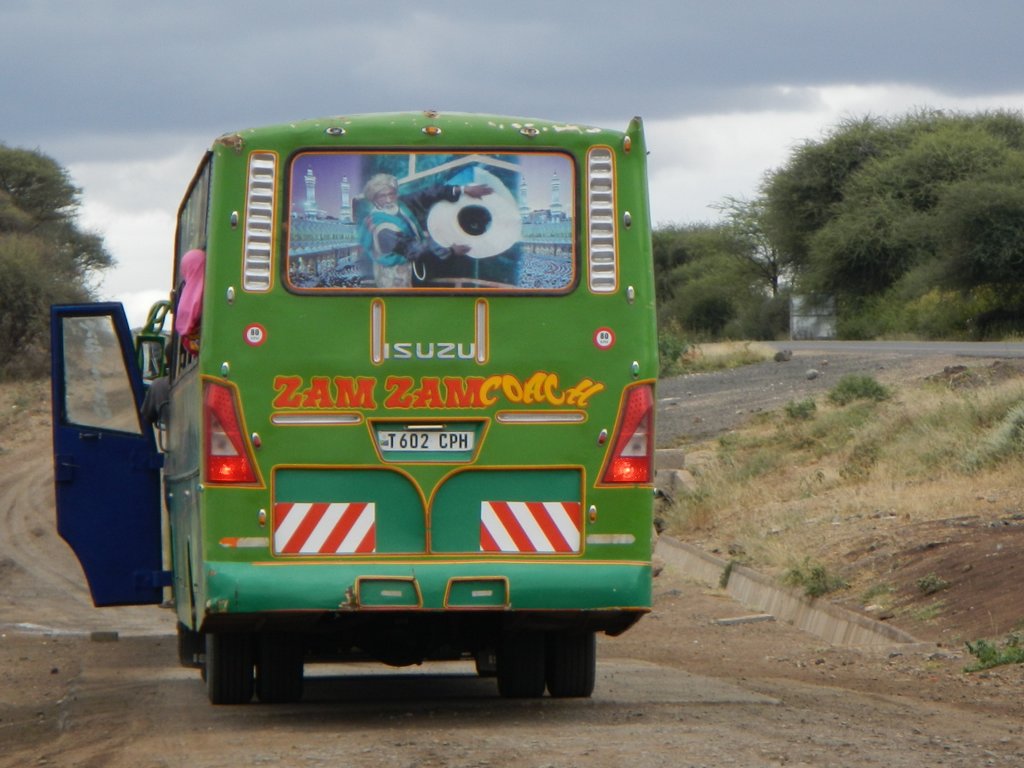 Relief when the back is visible , you just say , I survived another.

The road was almost done when I came across this Masai market day , what a sight to behold , the bold of blood-red awash across the market . As blood brings and carries life so this red set the market alight . Beautiful , strong , old and bold filled my eyes , yes Africa rich in so much. 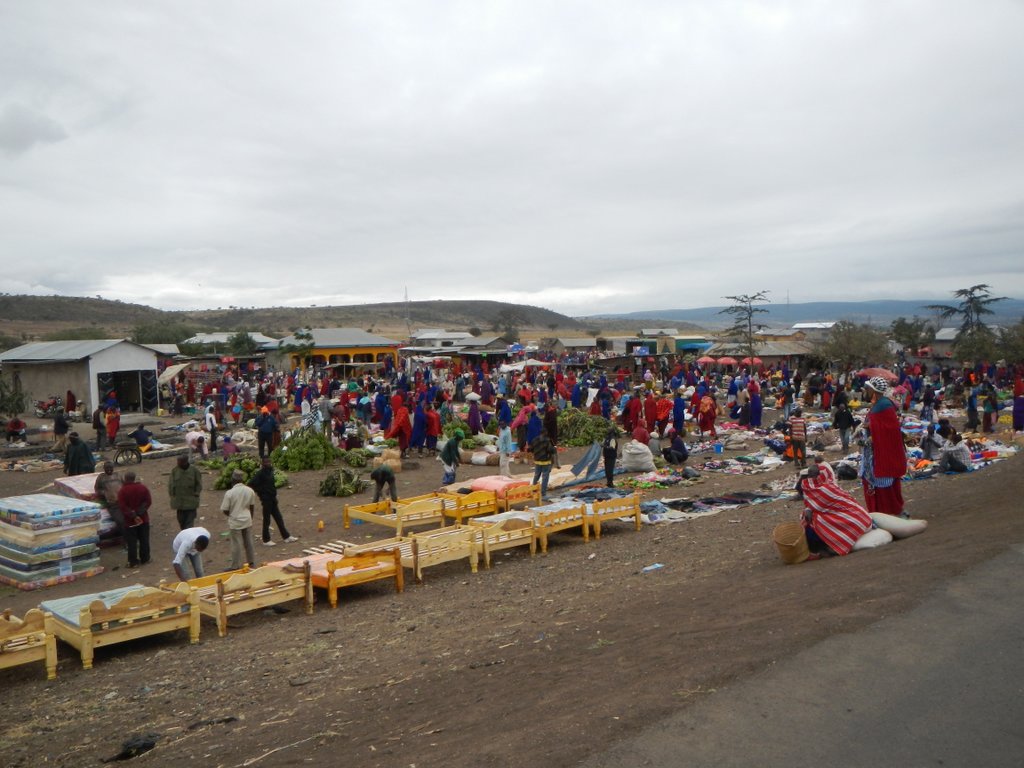 I stopped , tried not to be invasive , asked if it would be alright for me to take a few pictures , a young guy said it would be fine , but I must not focus on one person alone unless I asked them personally , so just a few general shots and then I put the camera away , sat on the scooter and watched an ancient tradition bring the modern to life. 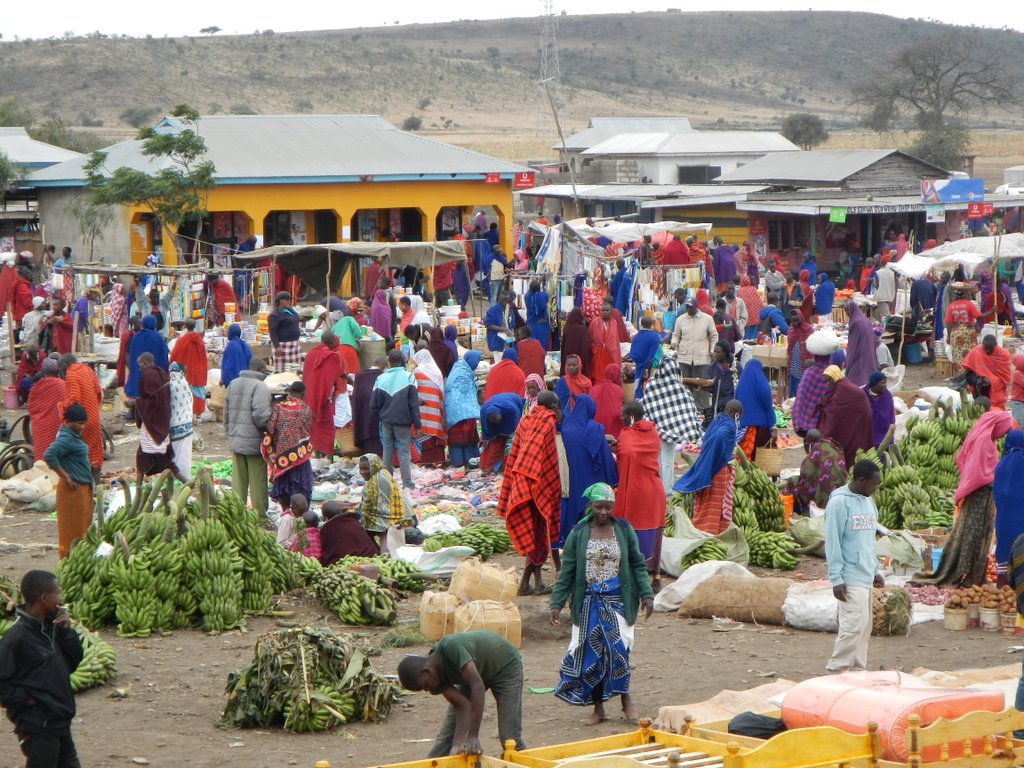 An hour later I was waiting in a school parking lot for my friend Tim to arrive and show me the way home . He arrived riding and revving an old school Honda scrambler as he slid sideways over the loose gravel and luckily to a halt just a few meters from Vic and I . Hugs and hello’s and we left for Tim’s place . Wow what a road , poor Victoria bouncing , scraping and clutch smoking as she finally summited , the stench of the clutch instilled fear of hurt as I parked her high up on the hill to catch her breath. I unpacked , pitched the tent , showered and walked up the hill to enjoy my first home cooked meal since leaving South Africa , finer than fine it was , enjoying Silvia’s delicious pasta , wishing her a long life on the day of her birth , just to end it all with scrumptious home made cake , dressed with only a few candles celebrating her youth . So nice to be with Tim and those close to him , we sat back , I felt warm , safe and secure in the fact I was amongst friends. Welcome to Arusha Solo and the scooter.

Lake Manyara and lions in trees