Morning breaks , and after breakfast we take the road on , to Kisolanza , body and mind well rested I was looking forward to the day as it would be a fairly short ride and I felt ready for the traffic , or so I thought. 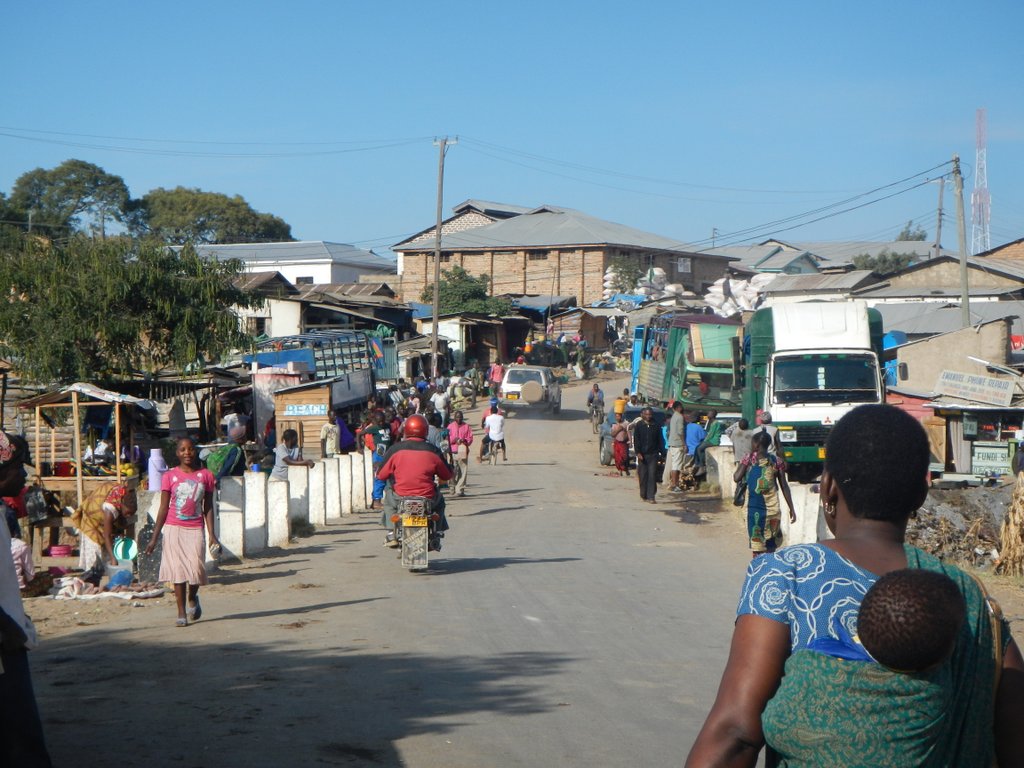 It was a slow crawl out of town but after about thirty or so kilometres the road opened up a little and I was able to get Vic up to cruising speed of around  70 km per hour , turned up the volume on the I pod and unbeknown to me I would be in a war zone for the next  150 km. It was  pod racing star wars style all the way to my destination , the day before had nothing on these drivers , I was now on the main corridor of death too and from Dar . 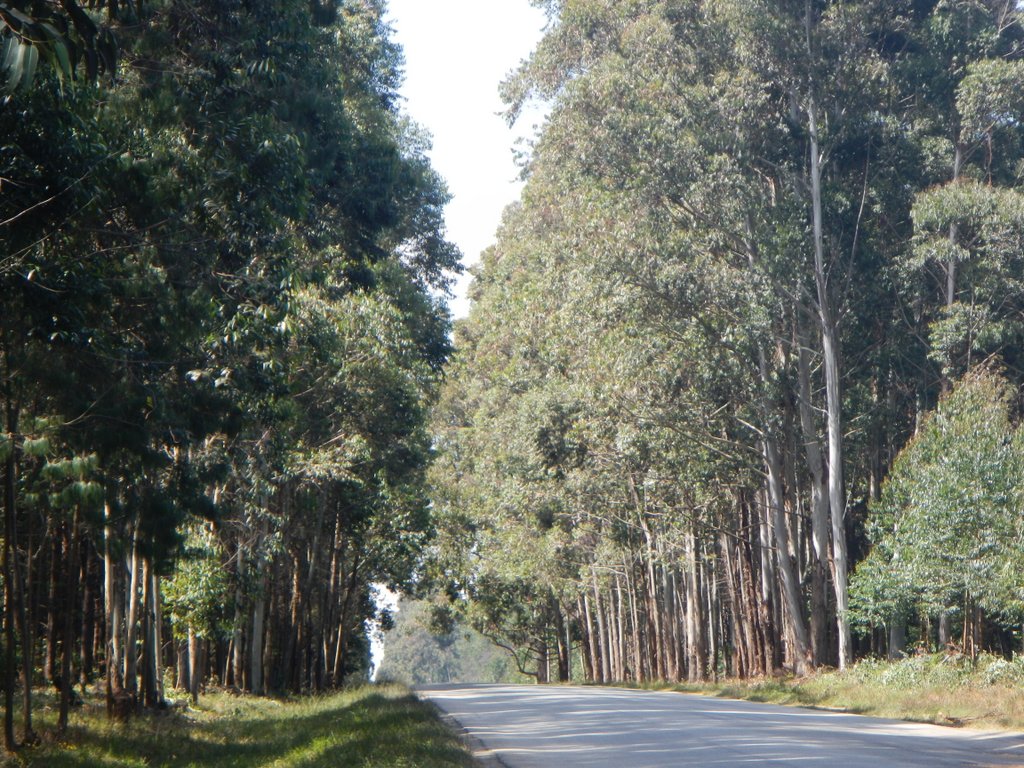 Picture taken after I was pushed off the road by an 18 wheeler for the first time that day.

The best way that I can describe the main roads of Tanzania , is to say you enter a war zone of metal , gears and rubber .The trucks , busses , mini busses and cars only operate at full throttle , with no regard at all for the law , for these drivers there are no rules of engagement . The roads are littered with destruction , like soldiers lying on a battlefield , some never to fight again , some surrounded by people trying to resuscitate them  , some fatally wounded just left to rust . Metal and debris litter the roads , towns and bush. Dead and dying hulks , once the proud couriers across this continent , now just destruction all around. 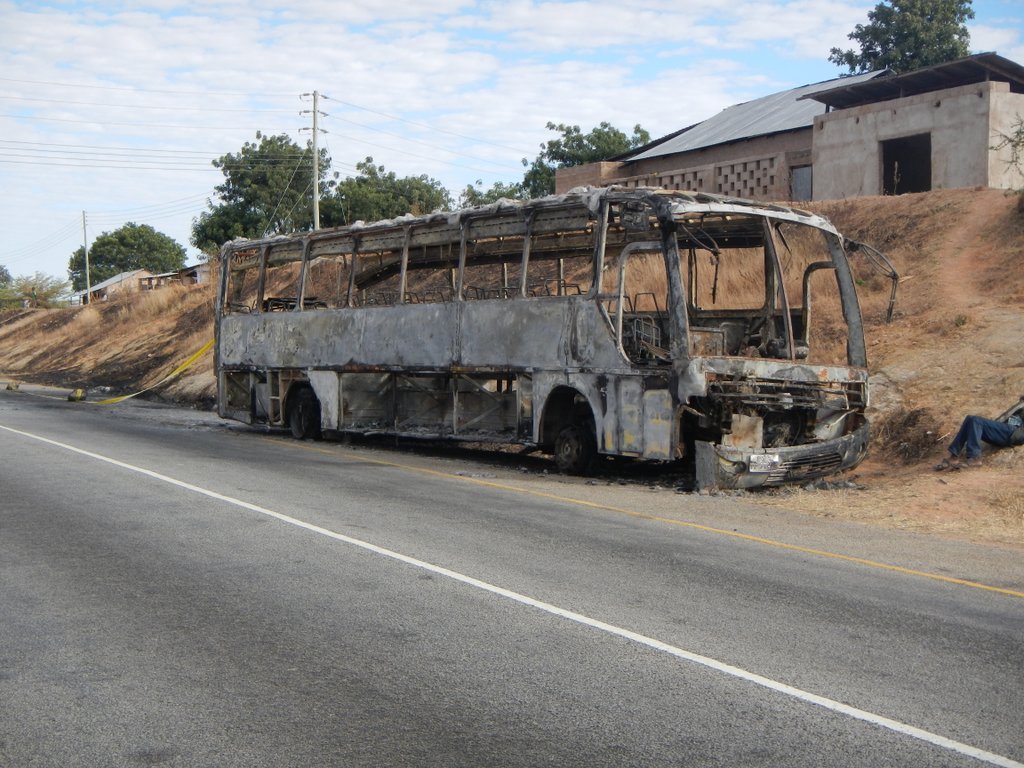 Something went horribly wrong here , would you say. 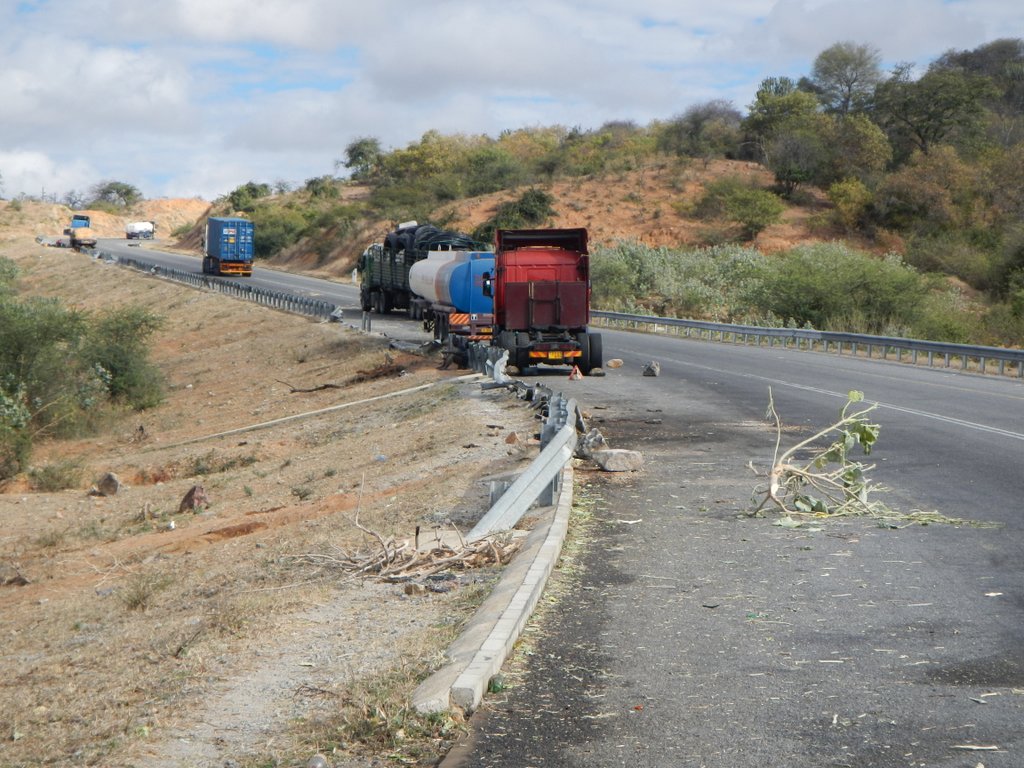 And so they struggle , some at a standstill , some just abandoned at the road side the hill just the last straw 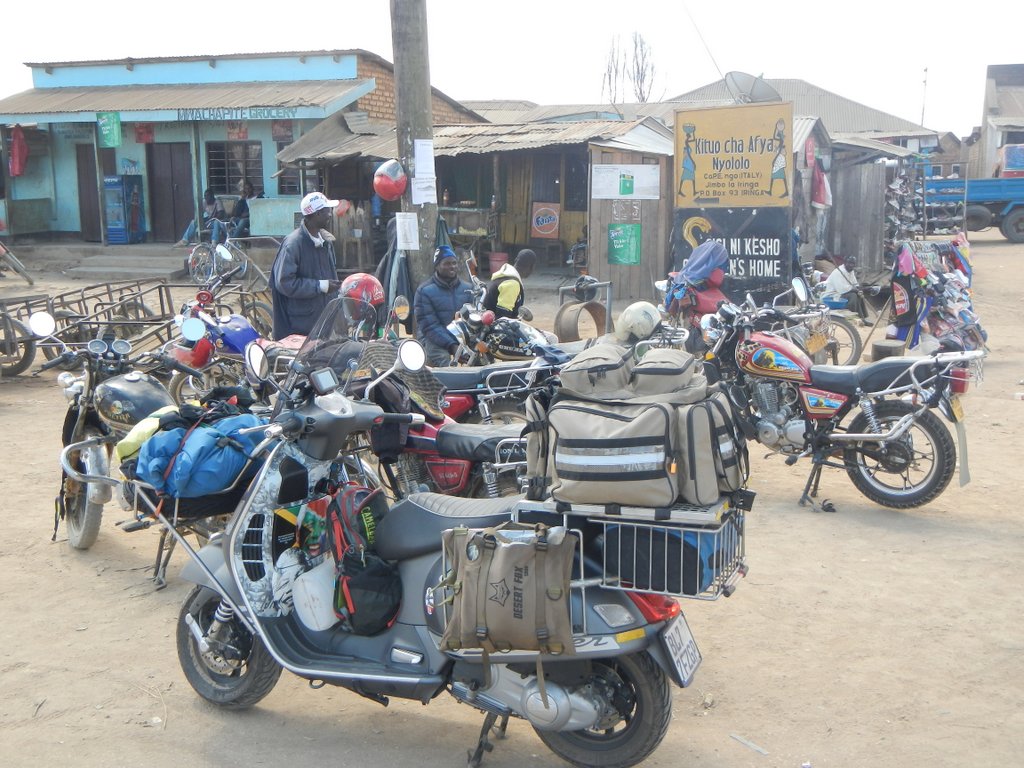 Some company for Victoria , she has tired of Toyota.

What was so difficult initially , was to read the signs and anticipate what the drivers would do next , and I suppose like anything with a bit of real life experience , you find your rhythm , so after being pushed off the road 4 times , I had developed a skill set to get through the day. I would slow down and get off the road when the fast busses came up from behind , I would keep as far left as possible on blind rises and reduce my speed to around 20 km per hour so if my loaned lane was full with a vehicle passing another it was very easy for me to get out of the way.

I vowed to  find back roads through this mayhem to get to Arusha  alive . The sad thing about the driving here is that the beautiful scenery , open spaces , the sights and sounds are lost as you develop tunnel vision , focusing all your survival instinct on the tar strip you ride , nothing else enters your field of vision .  So for a time on that ever changing road baby Jake took on Tyson and lived to tell the tale. 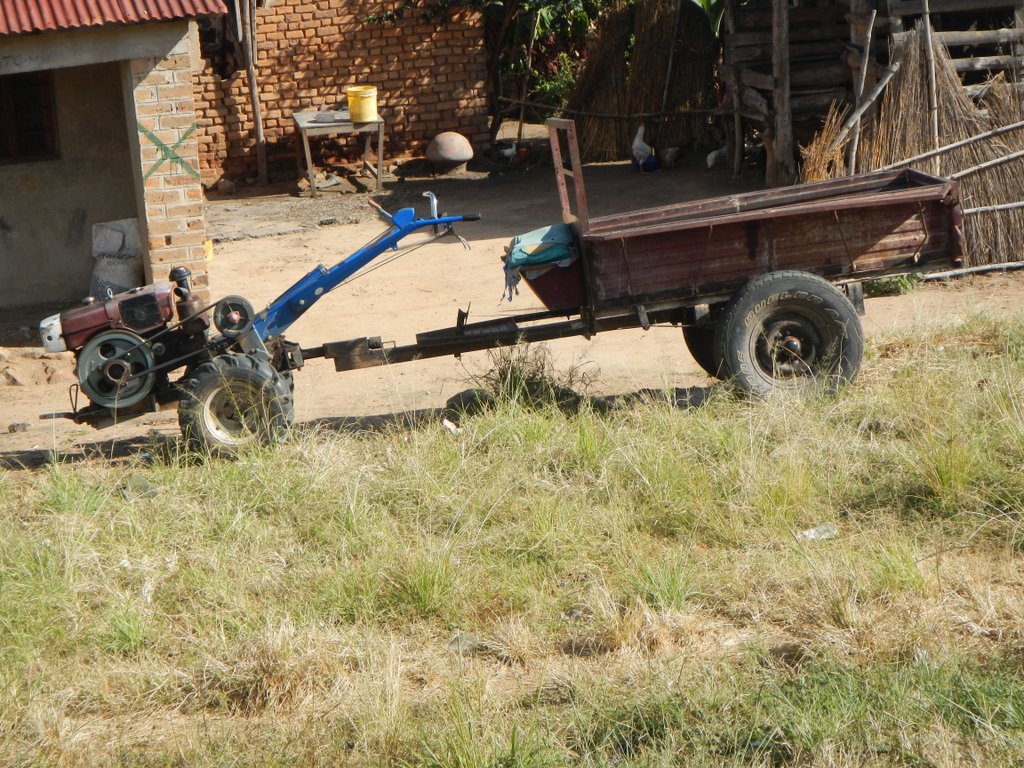 This mode of transport can do anything you can imagine.

So after seeing more of the busses and trucks headlights in my lane than their tail lights , I arrived tried and tested at the old farm house , set up camp , had a shower and sat in the quiet surroundings to gather my thoughts , as to how I get through this country in the safest way. 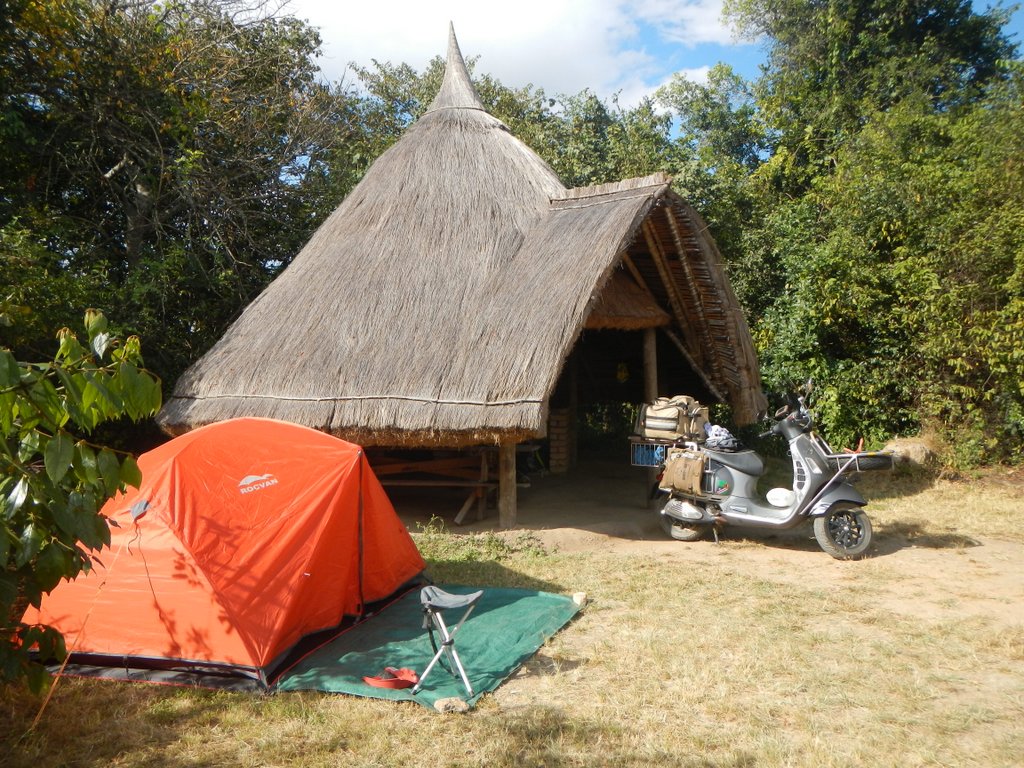 Home for the night

I had opted for the camping , dinner and breakfast option , and was I in for a treat , the food was outstanding with a delicious leek soup as a starter , followed by a T rex T bone with crisp and fresh organic vegetables ,  finishing off with a slice of moist chocolate cake , just so scrumptious . What made this whole experience unforgettable was the attention to detail and how in a very basic place with only one plug in the kitchen and the entire camp operating on solar , fire and flame  one could produce such a trio of delight 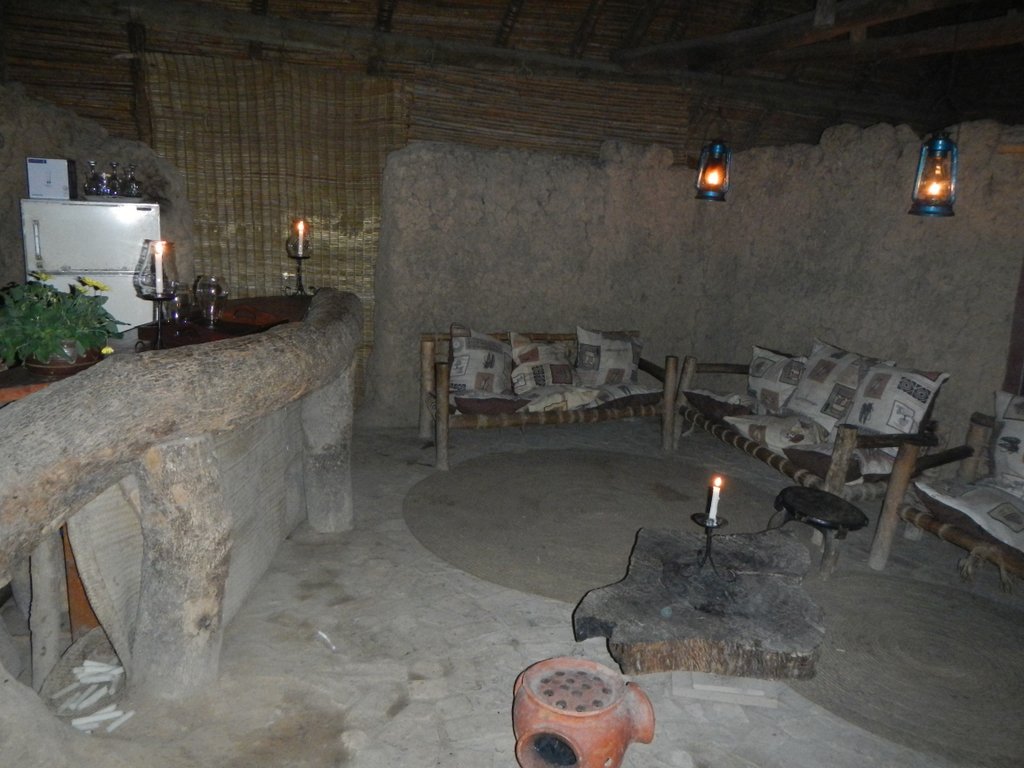 The entire structure made from mud and thatch , bathed in candle light.

The next morning up early , broke camp and spoke to Nicky the owner who was very helpful in assisting me with some route planning to get me up to Arusha in one piece. 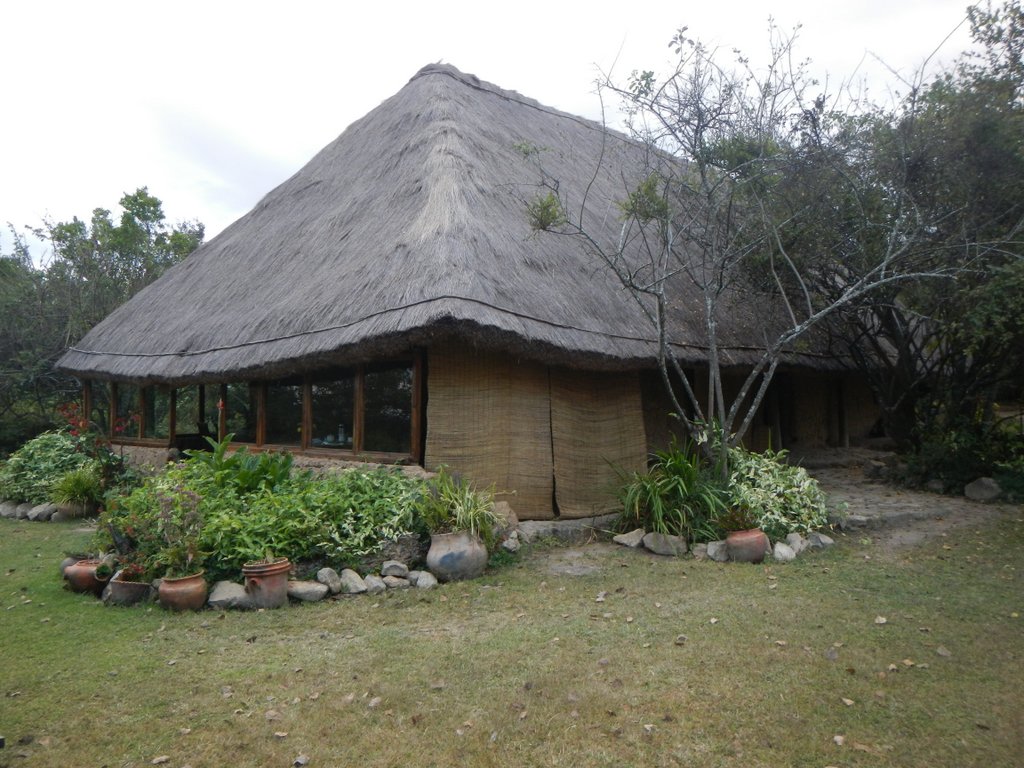 So our day started with our destination to be Dodoma . I was assured the road was superb new and tarred with very few driving opponents .  High spirited we set our sights on Iringa our first stop for pounds and petrol , it was also to be our first difficulty finding unleaded and a cash machine with cash to dispense . The town was extremely busy , the road appalling so it took us over an hour and a half to get through, eventually finding both to do’s on the list. The road works continued out of town and it was a good time before we found tar again. 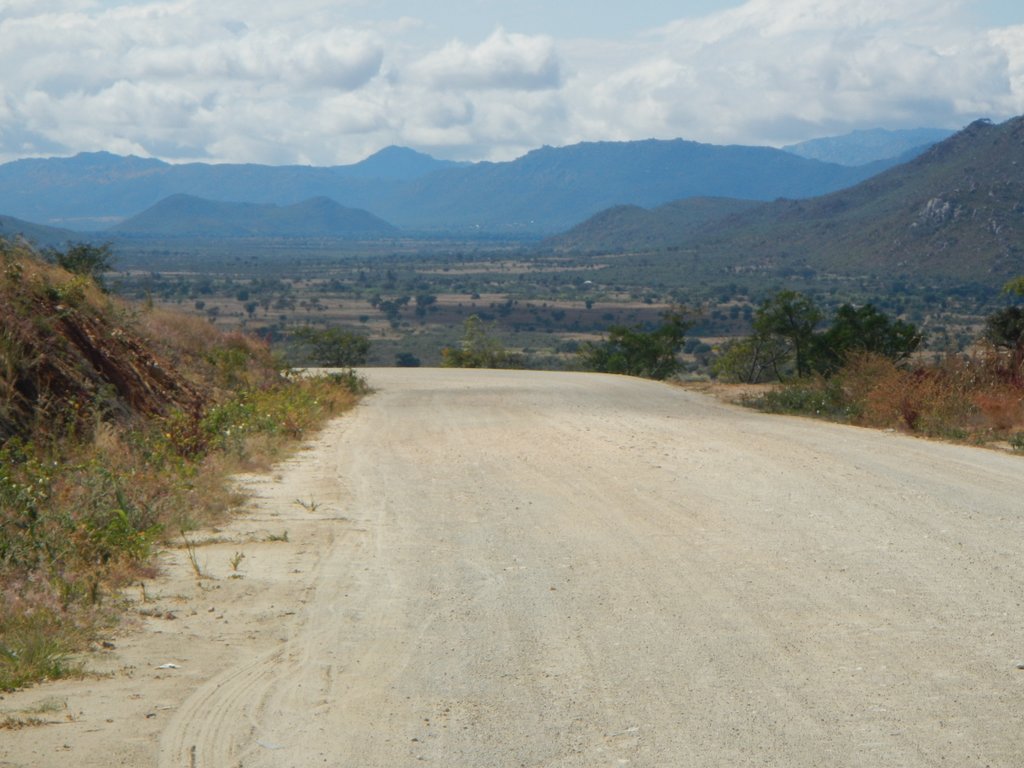 The road out of town

The slow going was rewarding in that  I was able to enjoy my surroundings  unlike the previous two days . I figured that this was probably the only bad section and soon enough we would return to the smooth and new asphalt. 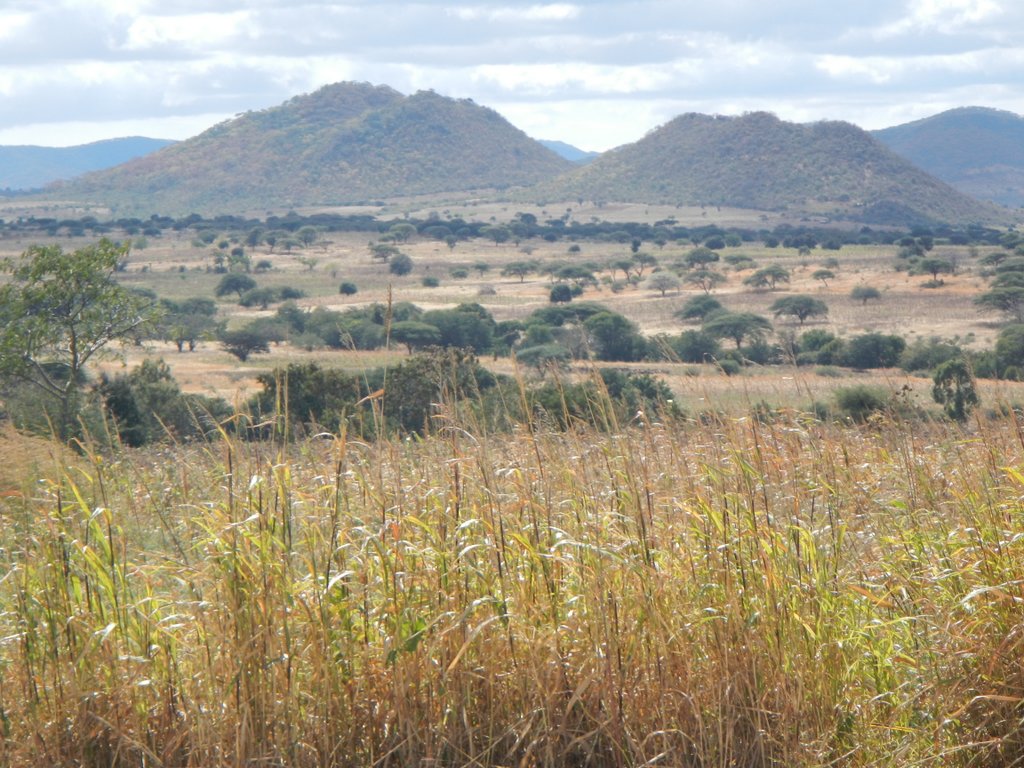 So we persevered and then out of the dust popped the tar and off we sped to Dodoma , the road was so empty all we came across were a few villages , bicycles and motorbikes , the odd car and mini bus , I was nice and relaxed and so very grateful to be out of the mayhem taking in the Tanzanian beauty , vastness and sights. 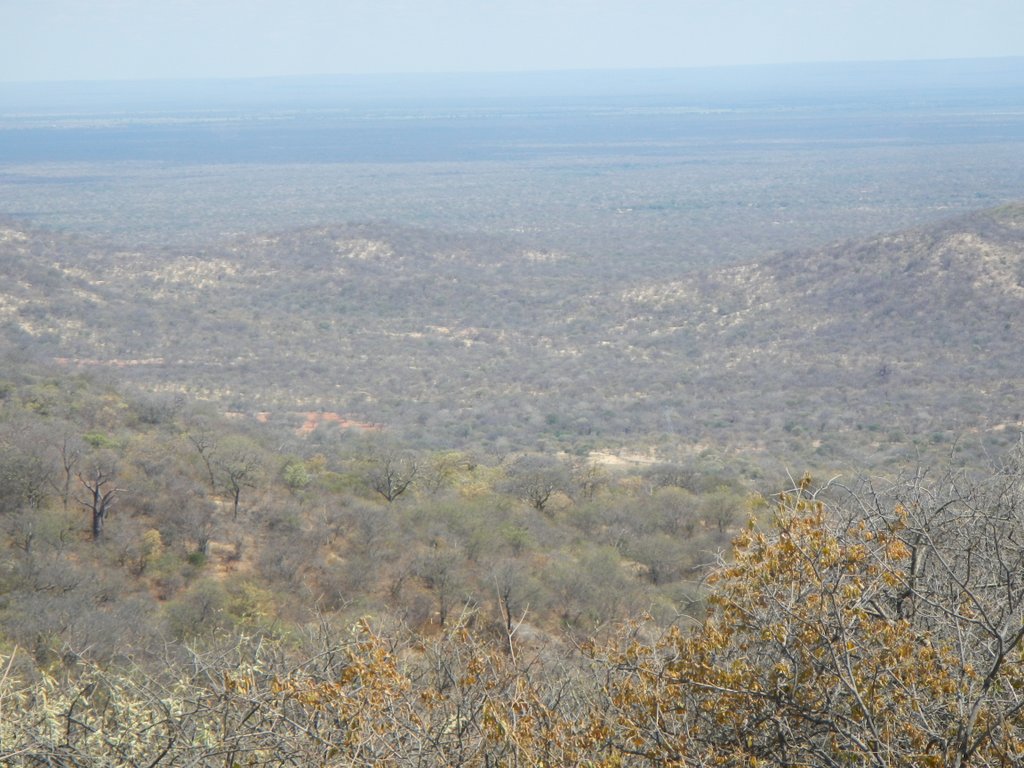 Where did the road go ?  Tar gone back on very bad gravel and so Victoria and I settled down to a very slow , bumpy and shaky  ride dropping our speed to around 20 km per hour and slower in places , I started to understand the reason for the road being so empty. Then the  tar returned and we took our speed back to around 70 km ,  by now the wind was vicious as we had come out of the sheltered mountain pass on to the open plains , no complaining I will take the wind over corrugations any day . We crossed over a very beautiful hydro electric dam with spectacular views all around , but I was warned not to stop and take photographs , as a consequence of my actions I would be arrested if seen .

I could not figure out why my GPS gave me an arrival time at the destination of 17h00 and when I calculated the speed and the amount of kilometres left I should be in Dodoma by 14h30 , I put it down to a error with the GPS and rode on. 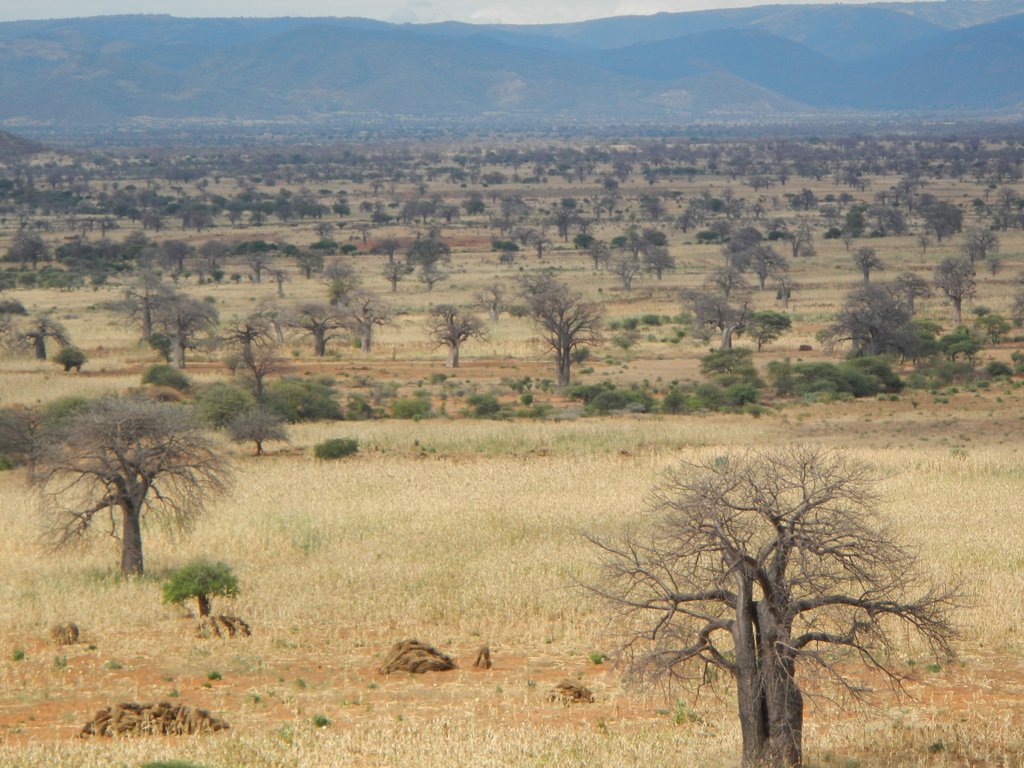 A few kilometres on I figured out why the GPS was estimating my arrival time to be after 5 , the road was gone and we entered a section of road and road works to top them all , 5 km per hour , thick sand , sharp gravel , on occasion mud , so we settled in to our new environment , slow but sure. 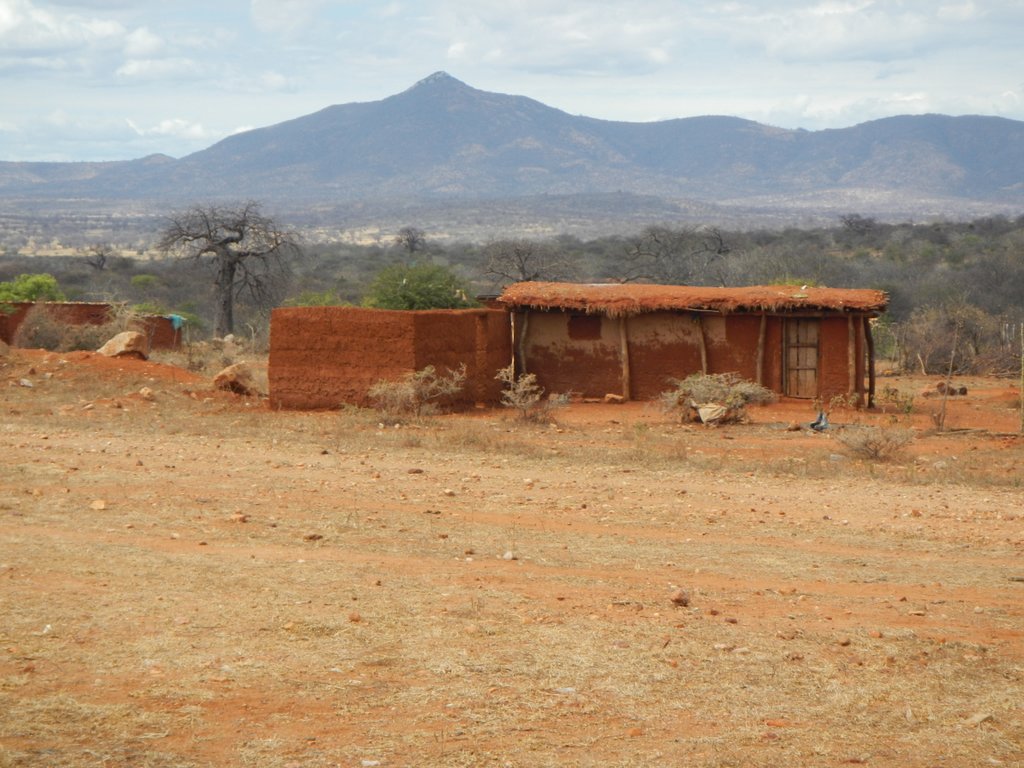 Very harsh environment to live in , I was glad to be passing through. 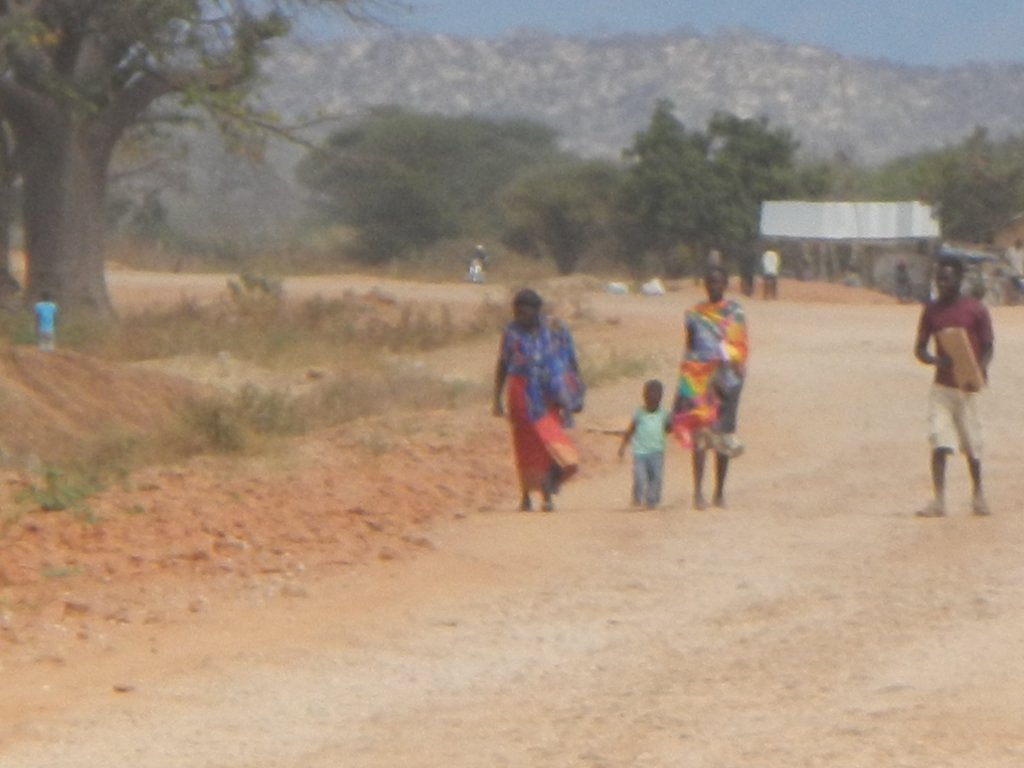 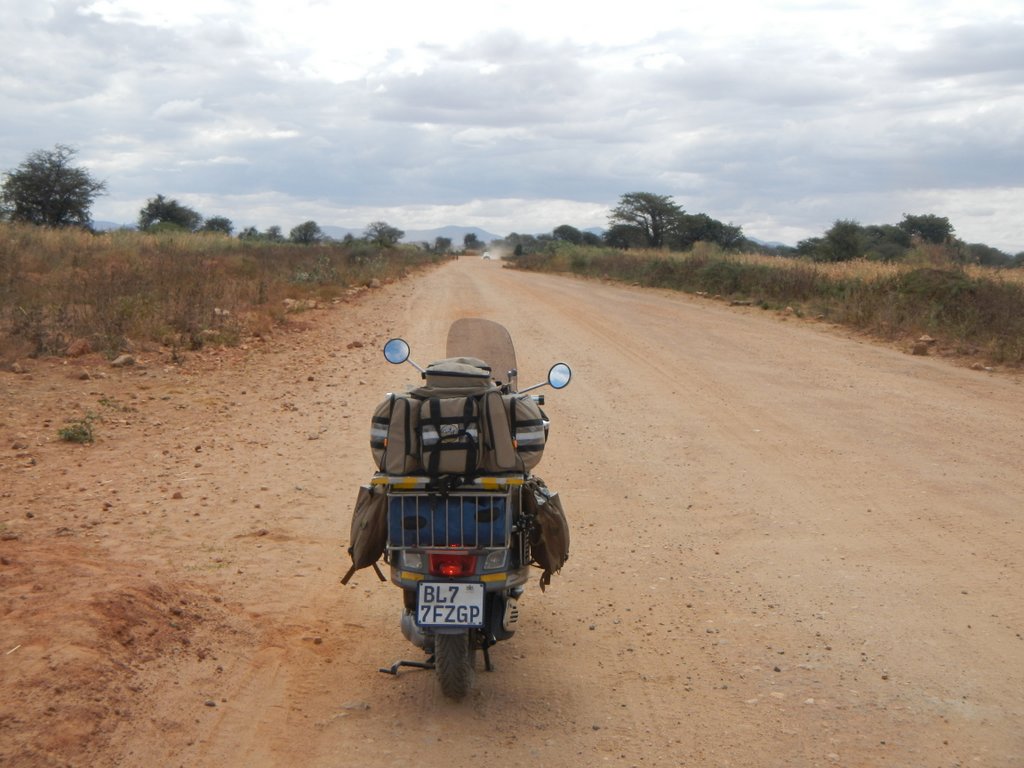 So we rested and rode 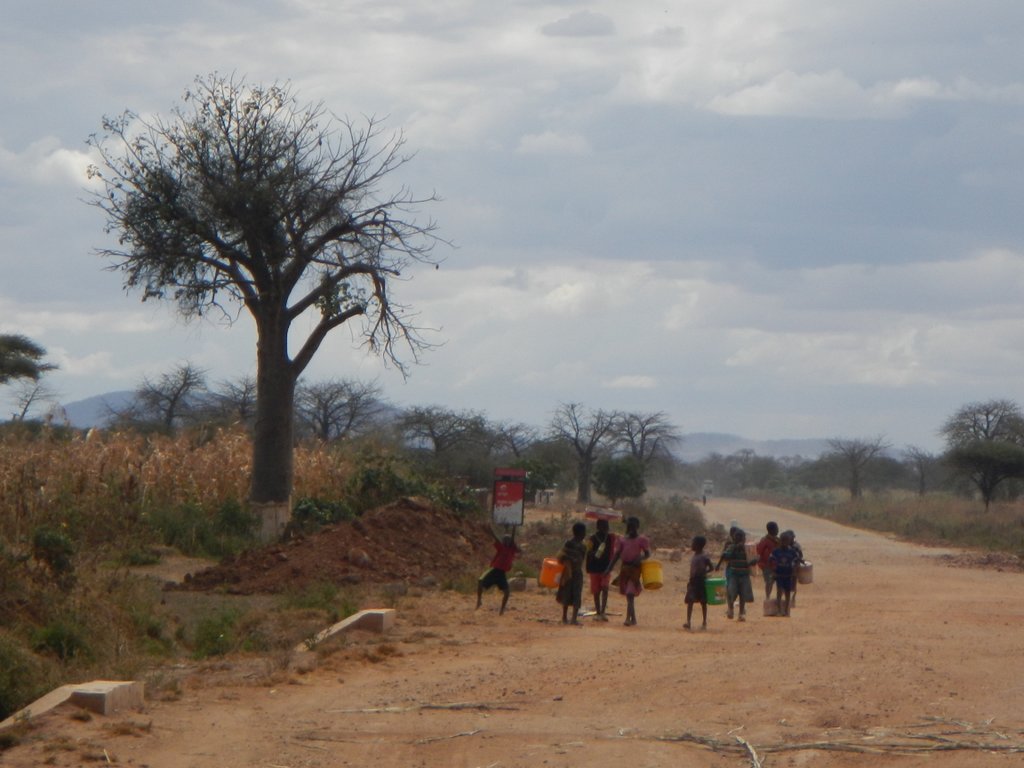 Water , so precious out here , this was the first time I saw people digging in dry river beds to get to the water.

So we rode hour after hour ,  in the never ending dust and wind , and finally we found a reprieve from the road , another scooter ,  we found a common language  not a word understood between us , but a kindred scooter spirit , a time to stop and share the moment. 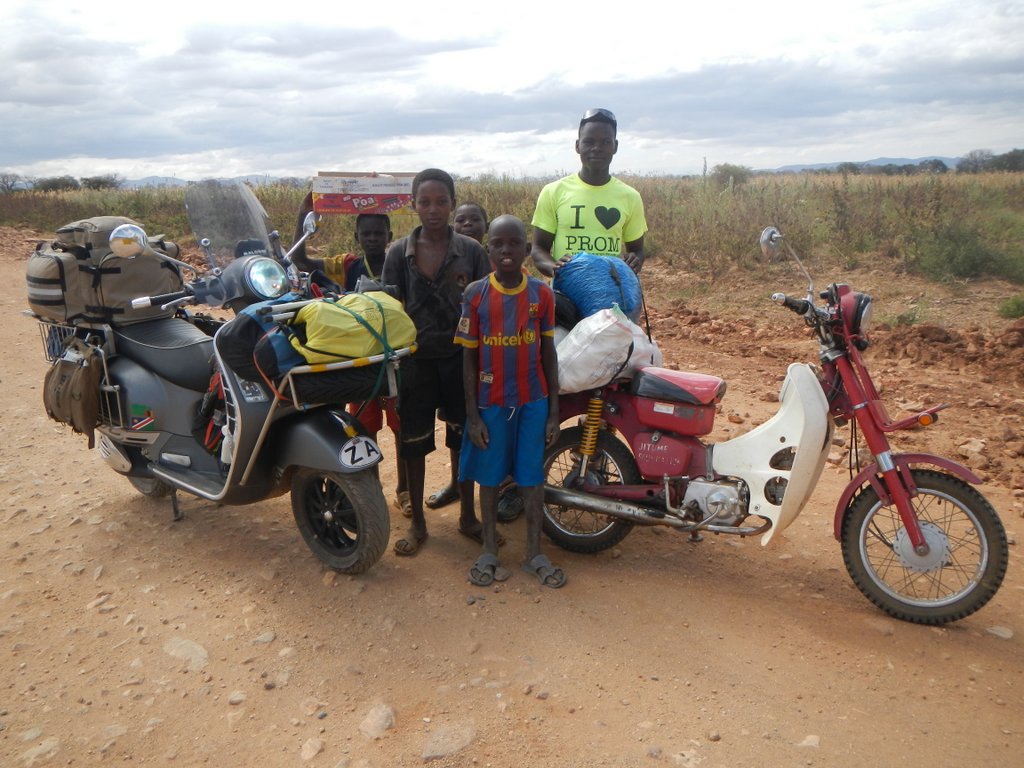 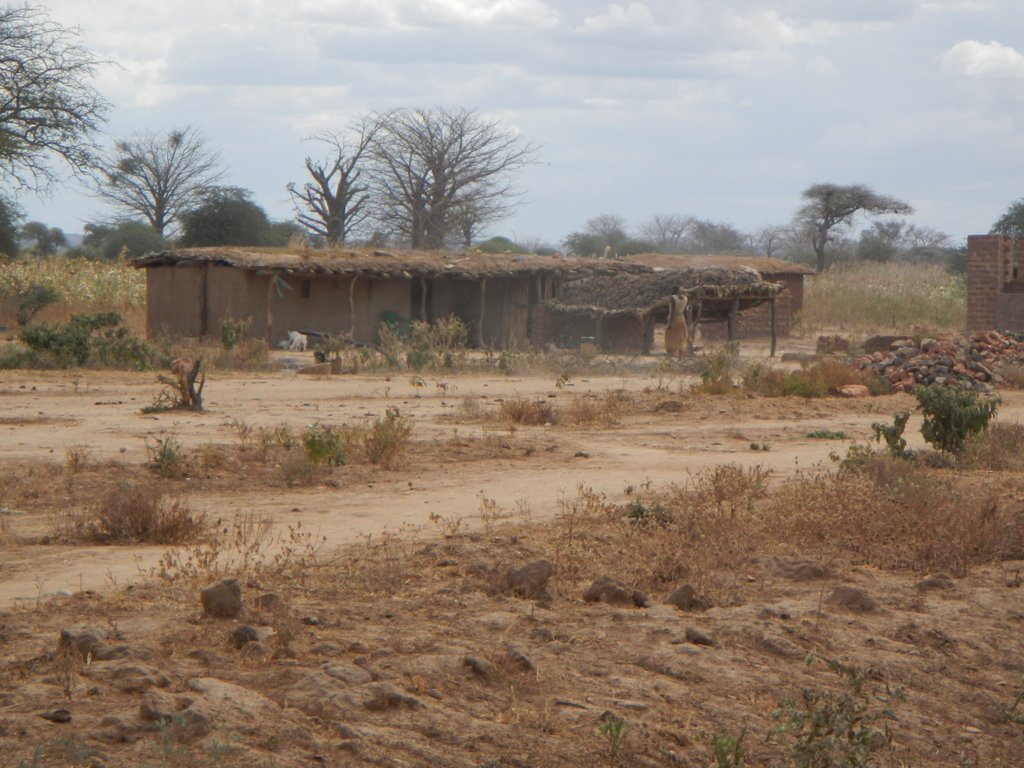 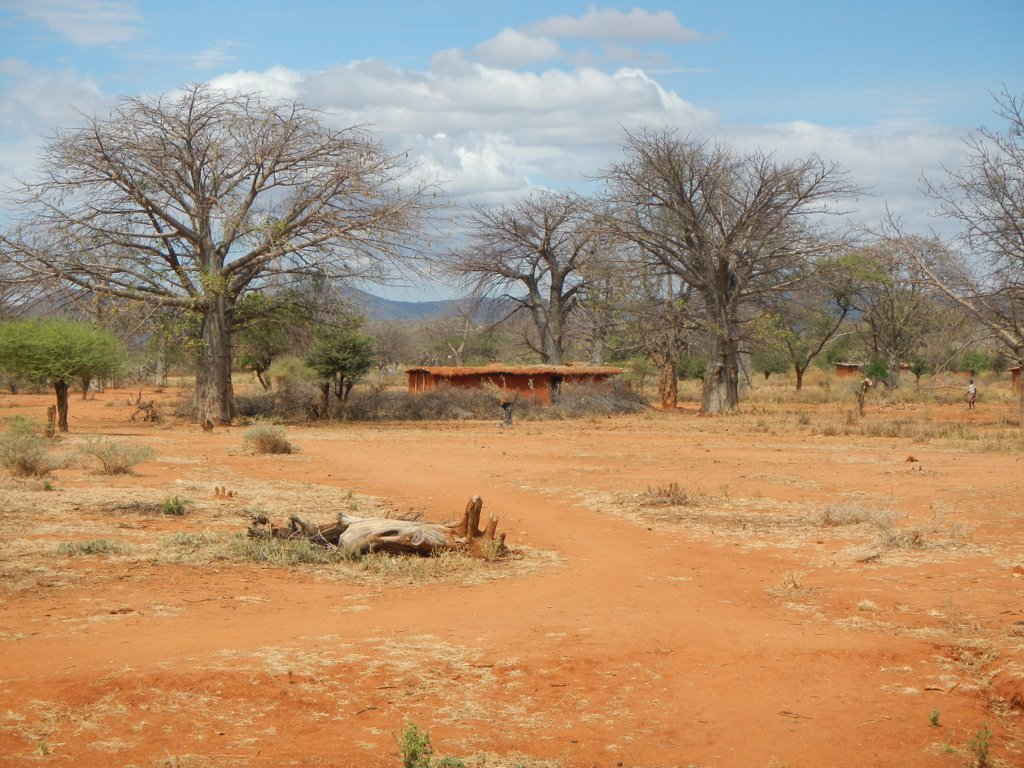 I was totally in awe at how strong and proud the people stood in a place not very welcoming .

And so as with so many  situations in life , the difficulties and challenges do come to an end and so Victoria and I found the smooth again , and in our hearts hopped this would be it for the day , and so we rested for a bit , before the last leg to Dodoma. 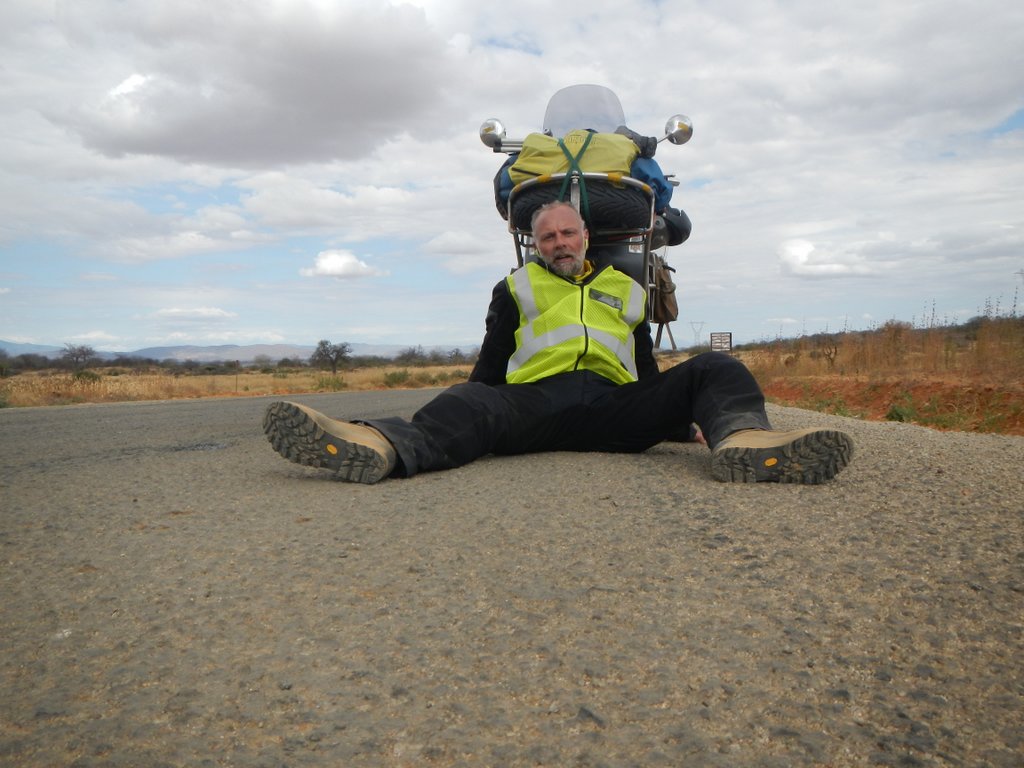 Just  a fraction past 17h30 we rode into the parking lot at the new Dodoma hotel for a shower , espresso and some fiery hot stir fry  . As I was unpacking my gear for the night , I looked at my dear scooter , thinking to myself what have I put you through ? and yet again you got me home safe . Laden with such  weight , conditions so severe on occasion, such  a vast continent , such small wheels. Thank you Vic. 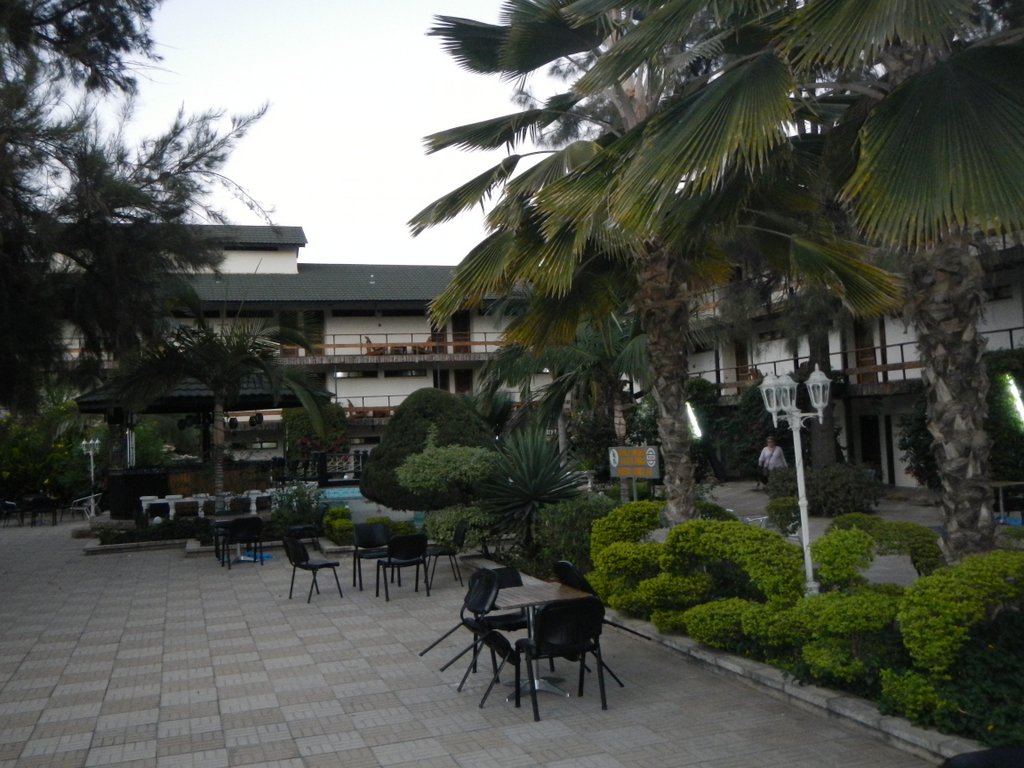 The Dodoma hotel our place of rest. 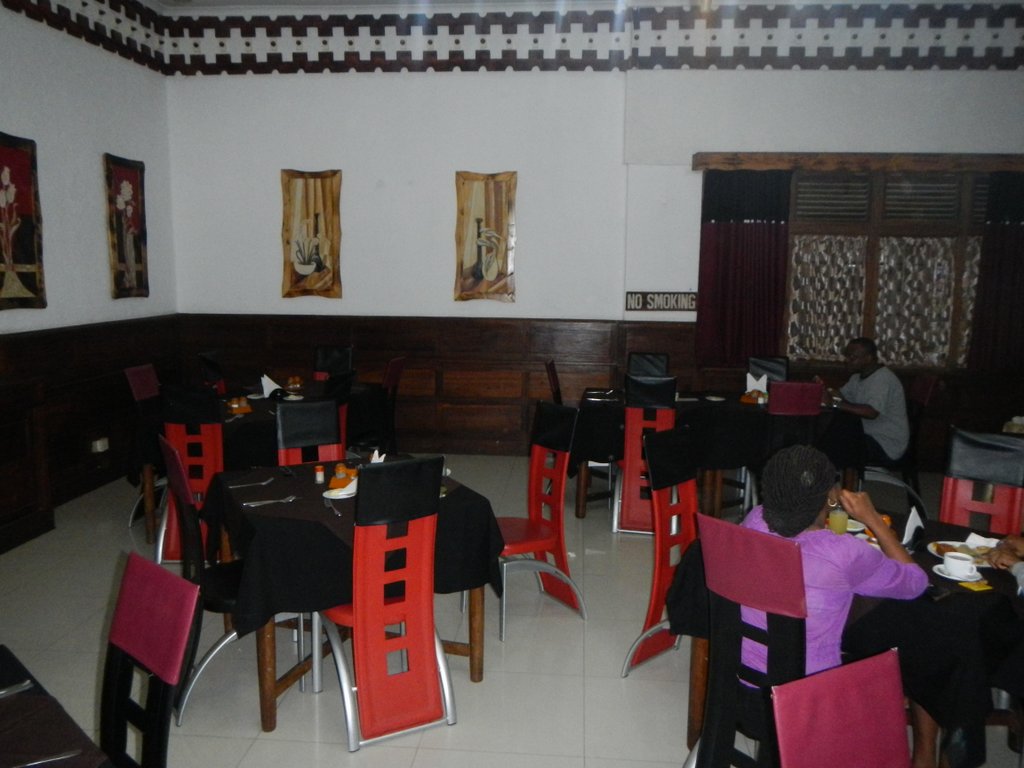 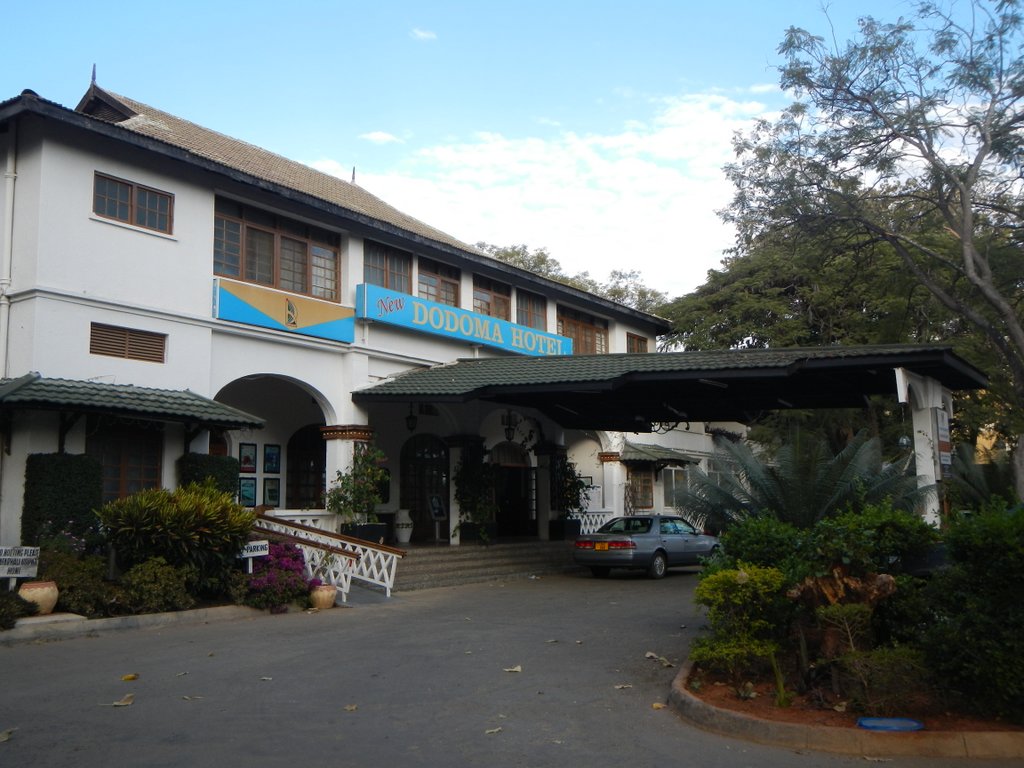 A welcome sight after a long day out.

The lesson learnt is that if a road starts with tar and ends with tar  what happens in between is the lesson .  So we ride for Singida next .

Meek and mild to Mbeya mayhem